Hey guys.
I thought all of you old-school scratch builders would appreciate the monumental task my good buddy Randy Cooper thrust upon himself.
Randy is one of the most accomplished model builders in the effects business and belive me when I say, there is nothing,...and I mean nothing that this crazy ******* can't build in like,....five minutes.
So four weeks ago he comes into the shop and says,...
"I think I'm gonna scratch build a three foot Millenium Falcon", my initial reaction was to laugh and then I realized who was making the claim and I thought better of it.
Just over a month later, this entered the world.

Here's some of the finer detailed shots of the model,...

Oh yes folks,...she's got lights too.

And my personal favorite,....

A few caveats,....
Randy was pretty adamant about doing this thing in a reasonable amount of time and in doing so,...took a few artistic liberties as well as consulting some of you Falcon gurus out there. He wasn't gonna track down each and every tank part so he did what every brilliant pro does,...
He kit bashed and approximated and considering the three foot Falcon differed from the five foot, and even from movie to movie he wasn't too nit-picky.
I, myself, am floored.
The base is also Randy's design and the pieces were cut on my buddy Dave's C and C, (CNC?) machine.
And here's the proud papa. :lol

Thought all you building maniacs would appreciate a fellow builder.
Later,
Sean

Only one suggestion: he needs the inverted highway symbol over the cockpit windows. 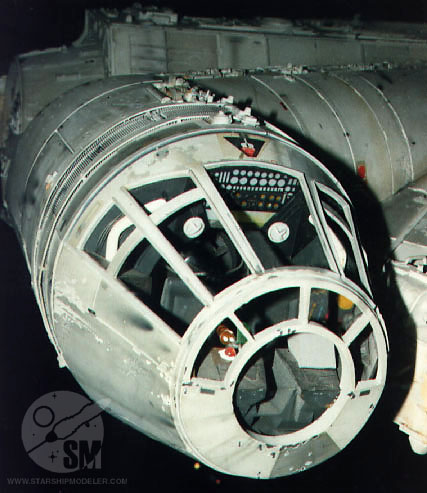 It's my favorite thing on the Falcon. :lol
T

Oh wow... Amazing work, the lighting in the cockpit is just incredible (I'll never understand how people get those tiny lights in). That is one model to be very proud of.

:eek that's impossible, even for a computer..


I can not believe he came up with such a beautiful model in such a short space of time - the man's a genius no doubts there..

Tell the guy that he is a freakin' genius. He built that in a month? My feeble mind can't comprehend such talent... :lol

BTW... I know that you are buried at work, but don't forget that email I sent ya.

RPF PREMIUM MEMBER
Holy crap I am such a novice.... I wish I had that much talent. :unsure

I wish I possessed 1/100th of the talent Randy has. I'm still trudging along ever so slowly on the old ERTL model I've got. Maybe I should just junk it and really stymie myself with a monumental task as a studio scale Falcon. :thumbsup

Only one suggestion: he needs the inverted highway symbol over the cockpit windows.
Click to expand...

Oh believe me,...It's been addressed and is in the works. The model isn't completely complete,.... :lol
I just couldn't wait to take some shots of it.
There is still more detail work to be done.
D

That is just incredible.

I love the base.

WoW. Coming from someone who's been working on a five footer for, oh, gee, about SEVEN YEARS now... I can't even COMPREHEND how something as insanely detailed as the Falcon could be completed by one person in only a month. Randy's replica, while not being "accurate" in the strictest sense of the word, is utterly amazing. It captures perfectly the look and intricate texture of the ILM Falcon models.

Wednesday at 8:05 AM
joberg

Wednesday at 8:03 AM
joberg

'89 Batwing Studio Scale Kits: What is out there?