TOS Phaser said:
The image on the right is what I saw - the emitter tip is not very bright (compared to other Hero P2s firing - such as the Finney P2 in Galileo 7 and I could not freeze a frame - where the emitter was lit first - as I can with every other Hero P2 firing.

Also the animated beam appears to start inside the nozzle...

This scene is relatively dark - compared to the scenes where Guytano and Latimer fire the Finney P2 where the emitter tip is much brighter.

OK so if the emitter on the Riley/Lenore P2 is a short concentric, cylinder (it looks conical to me) as was the case on the Kirk P2 / "Unknown" P2 - which would make it the 4th B&W Hero P2 to be filmed in episode 6, "The Man Trap" - then perhaps the battery in the power pack grip was dead and the P1 is not a Hero. Because I should be able to see the P1 sight window in the Riley P2 - where light and angle cannot be argued - and I do not.
Click to expand...

So the effects animators did a better job of syncing up the beam in the "King" shot, the effects animation was all over the place throughout the show. Any number of things can affect how bright the light bulb is, or what's visible in that tiny sight window. The window in the "King" shots appears to have smudges on it, the props were often dusted to kill reflections. There are other episodes where nothing is seen in the window. And yes angle plays a part, the P1 sight frame is about 3/8 inch back from the P2 window. The best "King" shots are from the lower left view. 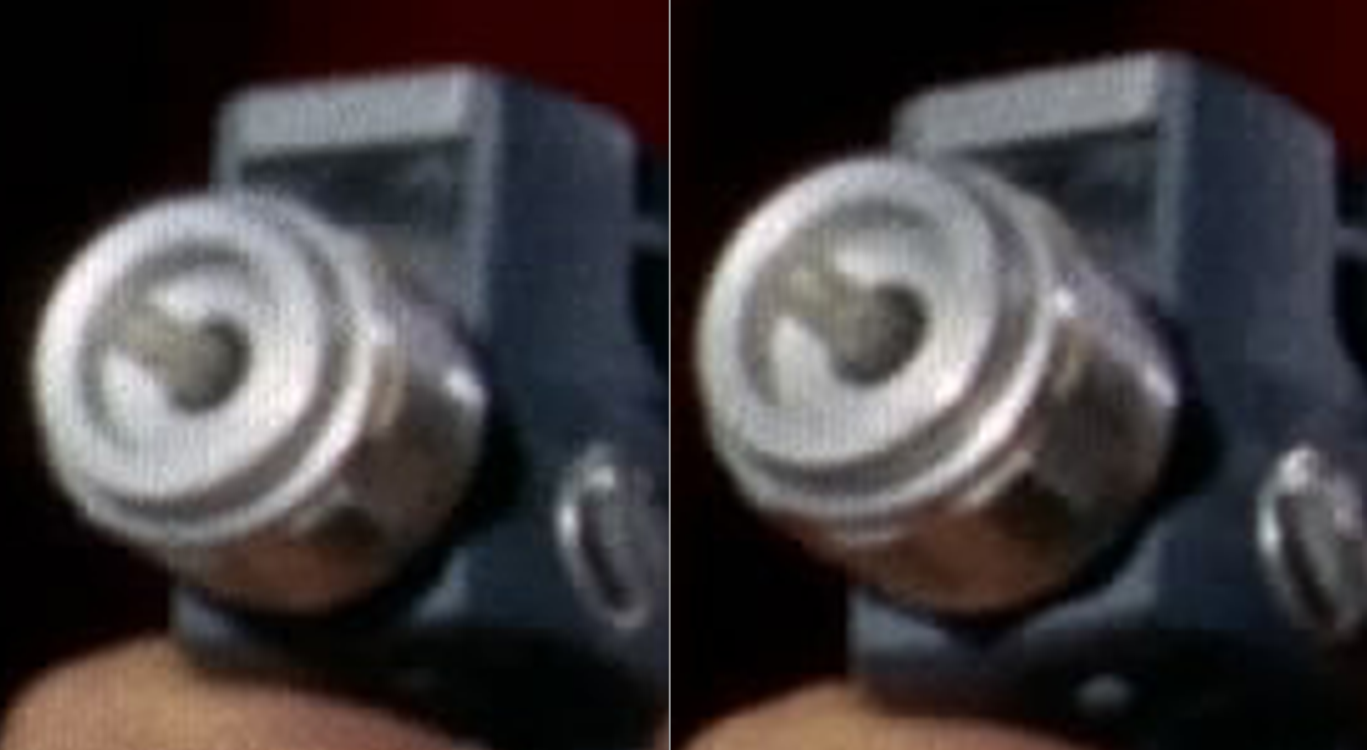 Apollo said:
Nimoy Personally told me he never had any props….
Click to expand...

I did not have the pleasure of meeting the man. I was not trying to start anything in this thread. I recall his son (?) relating that his father asked a camera crew not to film the wall display in his office - when the actor was interviewed shortly before his death - because he wanted to leave the "collection" to his heirs. Thus I made the mistake of assuming that since the interview was about the actor's role as Spock on "Star Trek", the original series that the collection must have also been from "Star Trek". I stand corrected.

robn1 said:
So the effects animators did a better job of syncing up the beam in the "King" shot, the effects animation was all over the place throughout the show. Any number of things can affect how bright the light bulb is, or what's visible in that tiny sight window. The window in the "King" shots appears to have smudges on it, the props were often dusted to kill reflections. There are other episodes where nothing is seen in the window. And yes angle plays a part, the P1 sight frame is about 3/8 inch back from the P2 window. The best "King" shots are from the lower left view.

robn1 - thank you for taking the time to respond to my questions. I appreciate it. And thanks for providing these images.
These images in particular answer several key questions that have been trying get answered over the past few months.
I have more changes to make and then for better or worse I can put my project to bed. Thanks again!

TOS Phaser said:
You wrote: "I believe the evidence shows only 1 hero P1 had velcro on the side since all 4 have been identified and three do not have velcro."

The following cap from episode 6, "The Man Trap" at approximately 32.X min reflects two Hero P2s hanging on two gold pistol belts:
View attachment 1624759
This is the first combat scene on the planet - where Captain Kirk and Spock are confronting Dr. Crater.

And here is another cap a second later:
View attachment 1624760
I believe with higher resolution caps of this scene - there would be no doubt that the two phasers shown in this
scene are in fact Hero P2s and not "plastic" P2s. I believe the P2 on Captain Kirk's gold pistol belt is the Scot P2.
It has a short concentric, cylindrical emitter and no screw on the right side near the nozzle - just like the Spock P2.

Here is a cap of the B&W Hero P2 that I believe is the 4th or Scot P2 (on Captain Kirk's gold pistol belt) made by the DPD:
View attachment 1624768
This scene is at approximately 34.19min. You can see the short, concentric, cylindrical emitter and no screw near nozzle.
Scotty wears the same B&W Hero P2 on his gold pistol belt in episode 7, "The Naked Time" - except for the broken tombstones
on the power pack grip - it is the same B&W Hero P2:
View attachment 1624769
Click to expand...

I never noticed that the botton popcicle stick is broken already.

I have been wrestling with the "Riley/Lenore" P2 for some time. At first I thought the Riley P2 was the 4th Hero B&W P2 with a short, concentric cylindrical emitter and then someone posted the following high resolution blue ray cap:
View attachment 1624833
However the emitter on the Riley P2 is not cylindrical.

I may be way off base - however I now believe the Riley/Lenore P2 is the same P2 that Dr. Van Gelder points at Captain Kirk and this P2 is what was refereed to in TMOST (4th sentence, page 273) as one the first "authentic-looking dummy phasers" the DPD made. At least 1 of the 4 "reworked" B&W Hero P2s were back from Wah Ming Chang and the DPD could have made a non-working, highly detailed P2 that closely resembled the reworked Hero P2s once the Desilu suits decided to stop using the very expensive Hero P2s.

View attachment 1624859
Notice how the sight window on the Lenore P2 has the same lumpy, milky white material behind the glass as the "Midgrade" P2s featured in episode 26, "The Devil in the Dark":
View attachment 1624860
In fact I think the Van Geldner/Riley/Lenore P2 was the DPDs first attempt to make "authentic-looking dummy phasers":
View attachment 1624861
View attachment 1624862
Since we know, thanks to feek61, there were only 4 Hero P2s (with Hero P1s) made - If the Riley P2 had a cylindrical emitter I could agree the Riley was the 4th B&W Hero P2 with a non Velcro Hero P1 inserted for the shot. However I do not see either a horseshoe or P1 emitter in the Riley P2 sight window. I definitely do not see either in the Lenore P2 or the Van Gelder P2. The Riley/Lenore P2s have Hero parts such as a "ten-turn" instead of a washer. It has been pointed out that the Riley and Lenore both have the same raised screw on the bottom rear.
Click to expand...