ST:Wrath of Khan - Field Jacket - with photos of other cool people in them

Did I mention that this project is not all that easy? At least at my skill level...

Here's the back going together:

And with the front parts put together hanging with the lining:

This giant double piping for the shoulders...

Is fine until you try to attach it...
Then it became, well, not so fun. I broke 5 needles in under ten minutes trying to attach a sleeve... I knew that was going to be the hard part, but I had to invent new swear words...

Actually what I had to do was switch to the heavy duty manual machine- much harder to use for this sort of thing and a lot slower, but it can stitch the thick stuff without breaking a needle every half an inch... 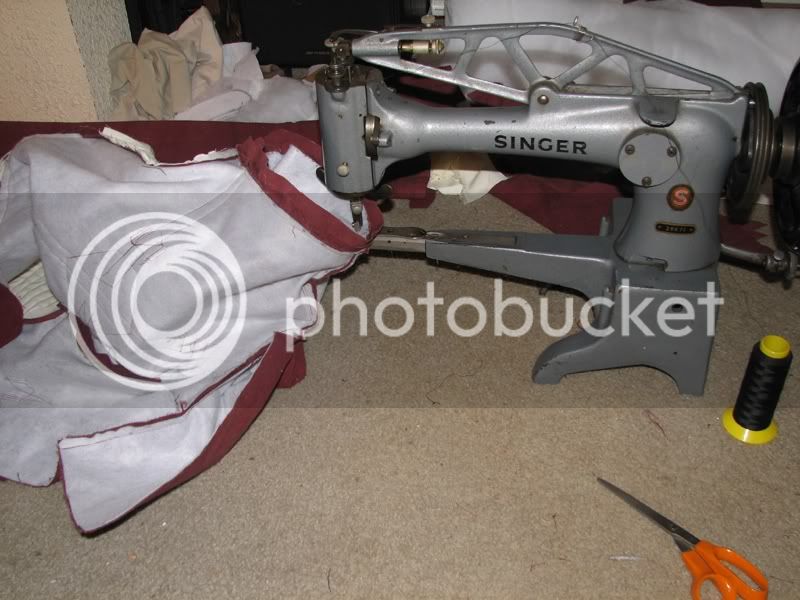 So if I look angry in this last shot, mostly it's because I just never seem to be able to smile in self portraits, but it's also that I was still a bit frustrated when I took the picture.

So, now if I can manage not to totally frak up the zipper, then I should be in the home stretch.

Remaining steps- hem the bottom edge, make and attach the front box pockets, phaser holster and sample pocket, attach the lining and zipper- and a number of smaller support steps in there...

But with each update I let out a bigger fanboy squee!


Fantastic work so far on what has to be the most complex of all the Trek uniforms!

It's looking great, Robert Fletcher would be proud, I think.

If your 2nd jacket needs a home, LMK!

You're an optimist, aren't you, Jon?

The second jacket is going to be seriously tiny, as it's being made to fit my GF. Actually that's been one of the more interesting challenges with preparing for this project.
At first I was worried since I had no real measurements on any part of these jackets- the closest I was able to get to hard dimensions was using the band-aid box to scale different parts on screen caps. (And we all know how accurate that tends to be-) But I quickly found that even if I made a perfect 1 to 1 replica of Saavik's jacket, I'd fail as a costumer since a jacket made for Kirstie Alley, 5'7 would look ridiculous on my less than 5'7 GF. The real goal had to be making two jackets that look good next to each other, even though the sizes are so different. So after estimating the size of the features (especially the front box pockets, but also the 'diamond' on the back, the straps, etc.) I then tried to adjust the sizes so they wouldn't look too big on her jacket, while not looking too small on mine... I'll have to wait and see if I succeed on that or not... At least it looks like they're going to fit us!
Last edited: May 6, 2011

There is a photo of a real solar system patch at TrekPropZone in case you need it for reference.

Wow that's so beautifully made!! I love it!!


Felgacarb said:
You're an optimist, aren't you, Jon?!
Click to expand...

LOL, yeah, I suppose so! When I posted that, I was thinking of how you had the extra McCoy jacket, so I wasn't sure if that might also be the case with the field jacket, since I saw 2 in your recent post. No offense intended.

I totally understand how labor-intensive these are - when my lady makes costumes for us, it takes a LOT of time as she tries to be uber-accurate, so she doesn't make costumes for others in general. When we recently wore the classic Lost In Space and Airwolf flightsuits she made, several folks were interested in commisioning from her, but unfortunately she doesn't have the time with college. We definitely understand about resizing the details for the female form, too - the Airwolf suits required a lot of that when she made hers.

Excellent work, and I look forward to seeing more pics and the finished jackets.

I can forsee many fans wanting one of these feild jackets since they are so cool looking and also unique & rare. You'd be able to make a small fortune if you could manage to retain your sanity. Since making several of these would most likely drive you insane, I think it would be great if you offered the patterns for sale once you have it finalized. You'd still make enough to finance future projects, and you could offer them at a fair price even if you only offerend them in digital format. I'm sure several people will buy from you!

This is awesome work and I"m very impressed!

In related news, I found another replica in existence- This is from a club called USS Justice's fan film:

It looks like attaching the sleeves killed my Pfaff...

I'm going to have to do some serious electrical trouble shooting to get it going again.

In the mean time, I've fallen back to my 1924 singer to attach the zippers. It is unstoppable. (And not nearly so nice to use, and won't stitch zig zag or reverse, etc...)

So, here's a mirror shot with the zipper installed: (And the collar up!)

That's right the zipper is yellow. Studying photos of the McCoy jacket that went up for auction, the zipper looked to have pale yellow teeth on a cream material. The closest I could get was solid 'banana yellow'...


Next, I spent some time on the tiny details that us RPF types love to obsess over. The briefcase clasp and the zipper pull. I couldn't find either, even hunting in thrift stores for old luggage, so I went with the scratch build method.

For the clasp, I used thin sheet aluminum again, and a couple of rivet heads glued in place.

Then stitched them onto the straps by hand.

For the zipper pulls, I honestly have no idea what they used in the films- I used a couple of sets of hemi-spherical plastic buttons, modified with a dremel (that's an RPF requirement, yes?) a small nail and more glue. 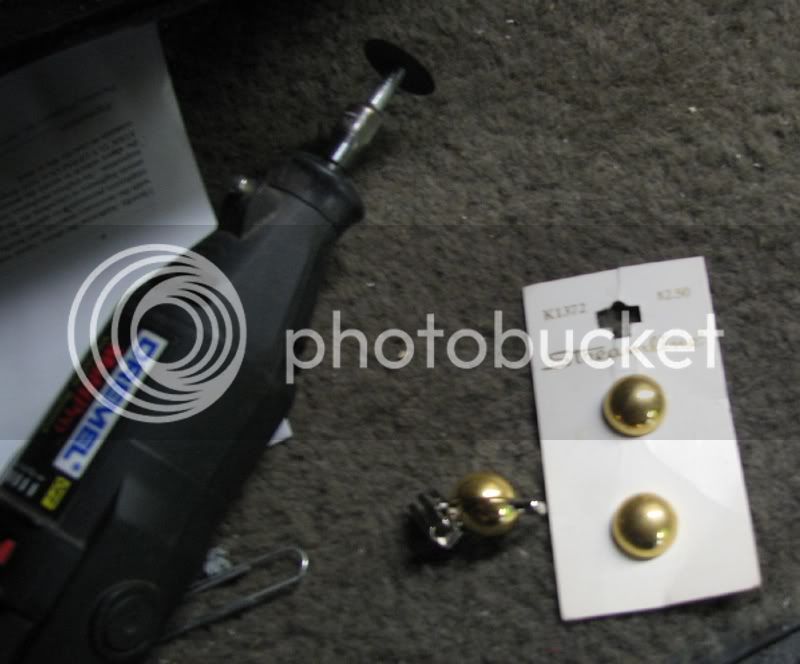 I cut the existing zipper pull in half and installed the new one over it. So here's how we're looking now:

And from the film:

I'll still need to paint it silver, but it's functional. I think the briefcase clasp came out pretty well.

Found another replica, this one made by "Primavera Productions":

As for mine, I've added the phaser pockets-

(Yep, going with the Diamond Select for costuming purposes. You might think that taking on this project was an excuse to buy more ST toys. But I'd prefer if you didn't...)

Made the service bands for the left sleeve, too:

(Almost smiling in this one!) 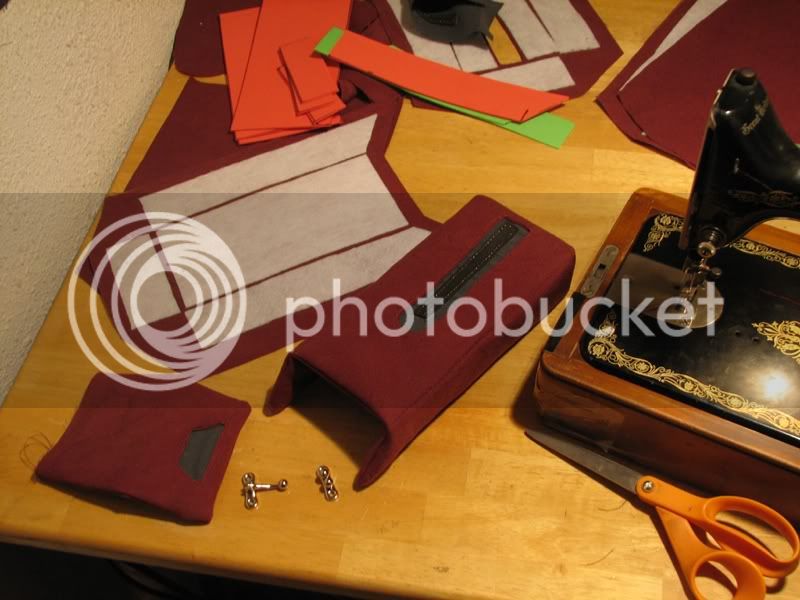 I used 'Foamy' craft foam sheets to add some stiffness to them.

These guys required the big machine. (Or hand stitching...)

I was just wondering the other day if anyone ever made any of these. Absolutely beautiful.

fantastic work, love checking in here and seeing your progress!

Even if you sold patterns, who's going to have all those different types of sewing machines and that bomb-proof one to be able to make this jacket???

That's a good point, DS... I'm actually planning on spending this next weekend repairing my Pfaff. (I'm going to need it...)

OK- Pretty much, I'm done with these. I'll still do a bit of tweaking and adjusting, I'm sure, but all the major work is complete.

This is a materials/cost breakdown. I usually try not to think too much about what gets spent making costumes or props, but this time I kept track. This doesn't include stuff I already had (glue, paint, aluminum, other thread colors, etc.)

I really did use up almost all 10 yards of the cotton duck. Pockets, straps piping and such use up more than you'd think...

Just to have everything easily findable, here's the link to the chest box fabrication thread:
http://www.therpf.com/f9/stii-twok-field-jacket-chest-boxes-105456/

I still have to make the pants to go with these, the shirts (with the trapunto collars and cuffs) and possibly even vests. But sometime before then, I'll try to put up a couple of pictures of someone besides the sewing dummies actually wearing them! To that end, I'll have to hope for cool weather, since these coats are pretty dang warm. (San Diego in late July? Two words: air conditioning!)

Bravo! Those coats are absolutely beautiful!! I so want one

My jaw fell on the floor and rolled away, which is going to make eating difficult.

I'm floored by how amazing these jackets look! Bravo!