So after Lurking here for quite some time and becoming heavily inspired by the likes of Mung, Gattaca and Bauble and many others on the forum I can't remember the names of (sorry!) I finally decided to just go for it and start building stuff. This is pretty much my first attempt at modelling and many, many mistakes were made and lots of lessons learned..

So a bit of background on the inspiration for the build, I work offshore in the subsea construction and survey industry as a tech and I have always wondered what the industry would look like if it was set in space. A strange idea I know, but stick with me!

Most Subsea work in deep and shallow water offshore is usually done with remotely operated vehicles or ROVs for short. They have many advantages over Divers as well as lots of disadvantages which I won't get too into or we'll be here all day but the main basic ones are the fact they can go much deeper than divers, the deepest ever saturation dive for commercial work was 316m (lots of other research dives did go deeper but this was the deepest commercial one as far as I can tell) although a bloke in a chamber in France I believe went to 701m, the deepest ever a person has gone.
ROVs however can go as deep as you spec them, they can also just go straight up and down from the surface whereas sat divers take weeks or in the case of the 701m dive 43 days to return to atmospheric pressure without dying or their teeth exploding. 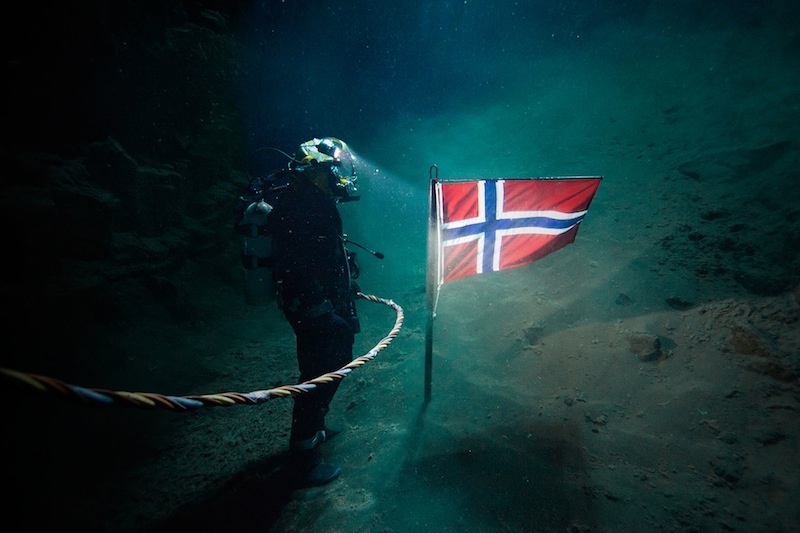 In my opinion as close as you can get to a moon walk on earth, the Americans and the Norwegians had an 'underwater space race' where they raced to get men to deeper and deeper depths, a fascinating and shocking read for those that are interested. The film 'Pioneer' is a fantastic Norwegian film based on true events of that race and what the men involved went through.

Another big factor is pay load, on a big work class ROV you can load all sorts or sensors and tooling to it to do whatever you need. 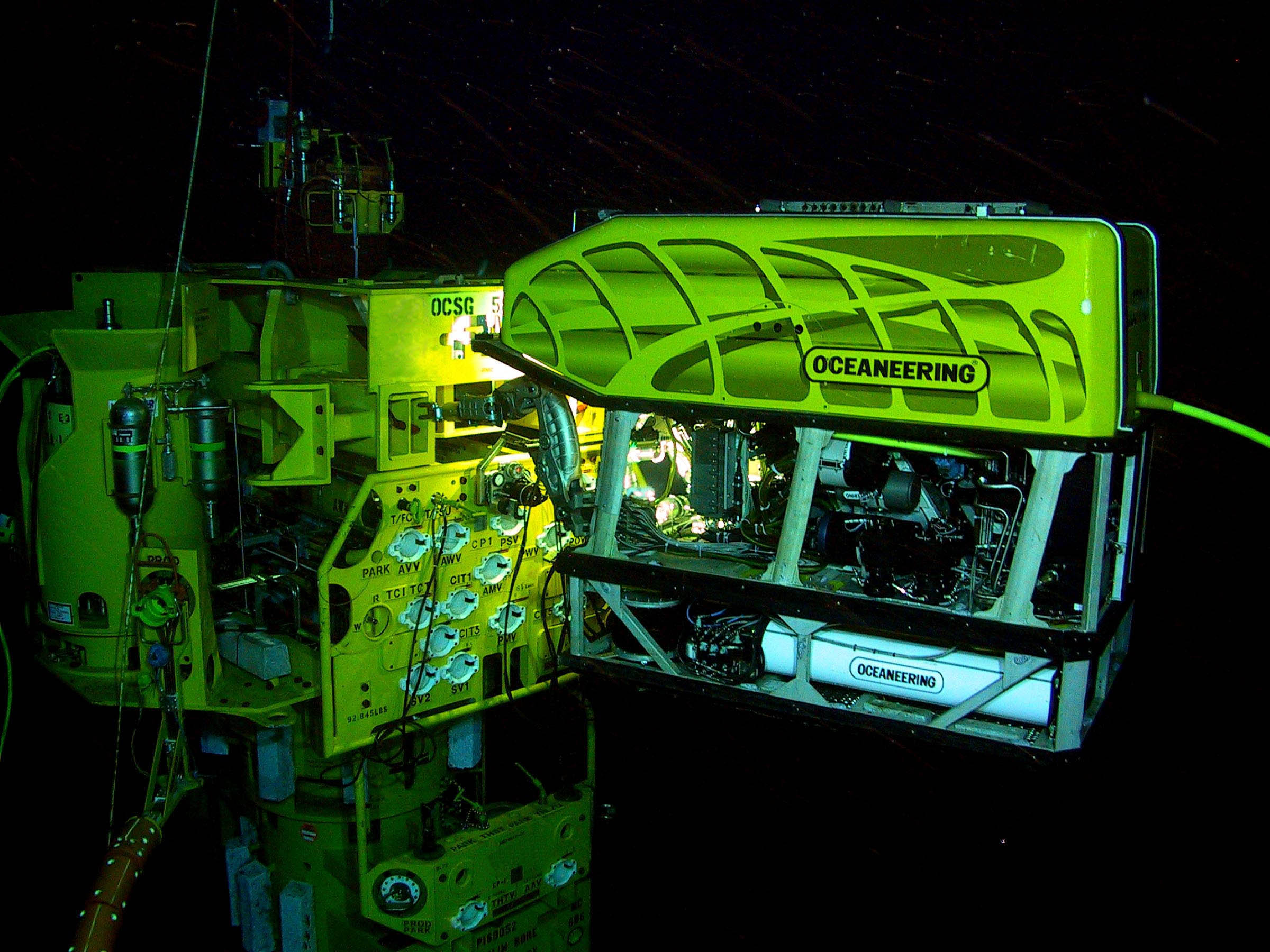 Anyway, apologies for the massive tangent back on topic! 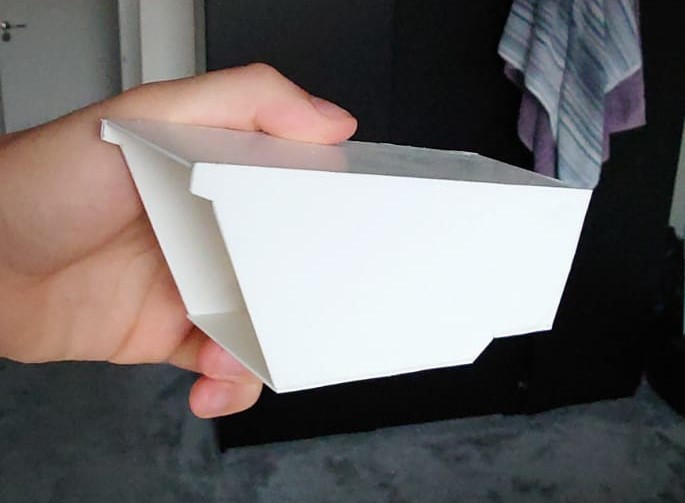 I would like to use this opportunity to apologise for the rubbish phone pictures!

Happy with the shape I started adding panels and features to the surface: 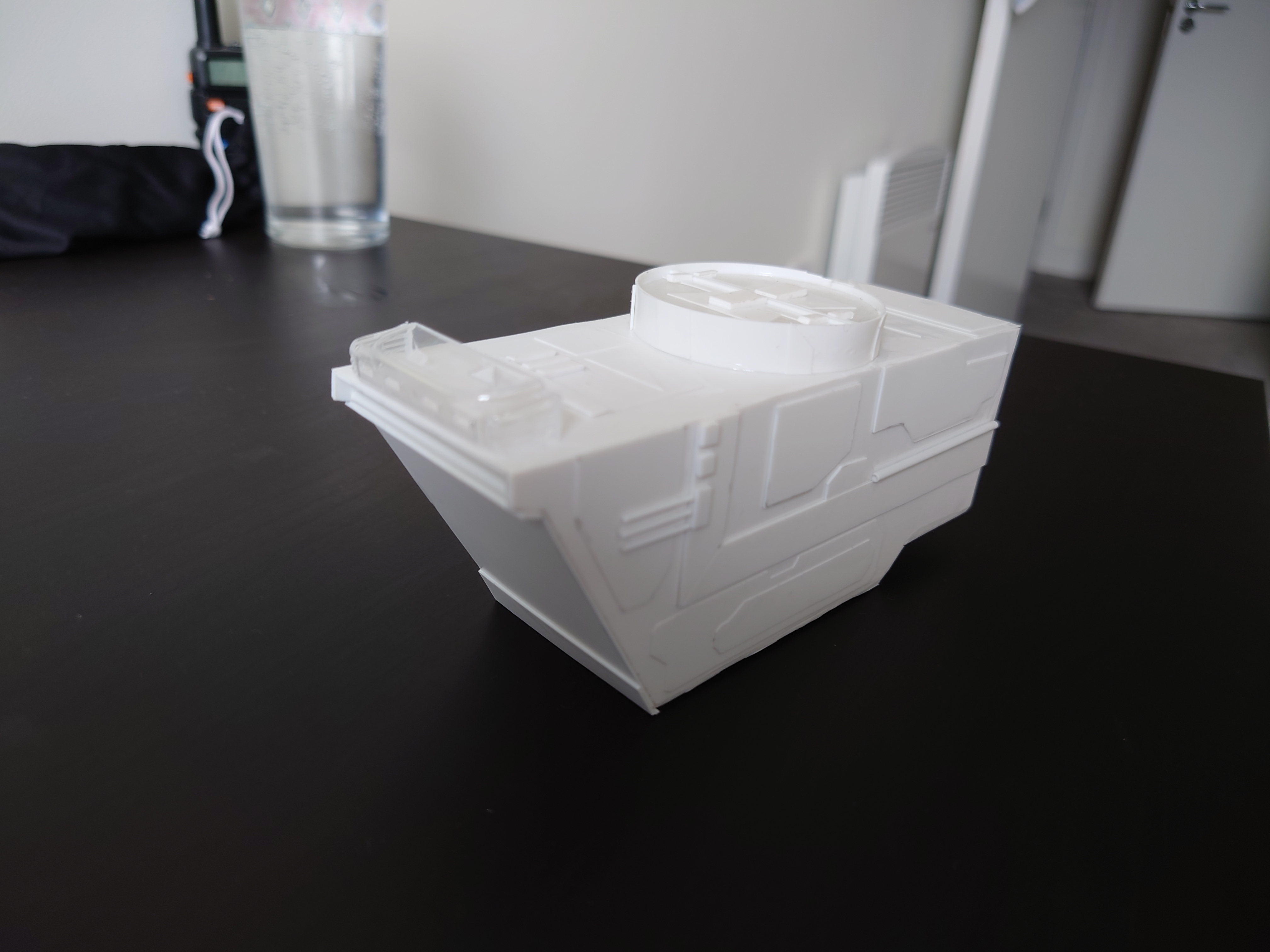 the panels are mainly cut up thin styrene, the round docking bay thing on the top is the lid from a can of shaving cream and the clear bit at the front is a razor cover.

Satisfied with the panels I decided to have a bash at putting some greeblies on, so I went to the local model train shop and bought some cheap wagon kits that had all sorts of stuff in them. 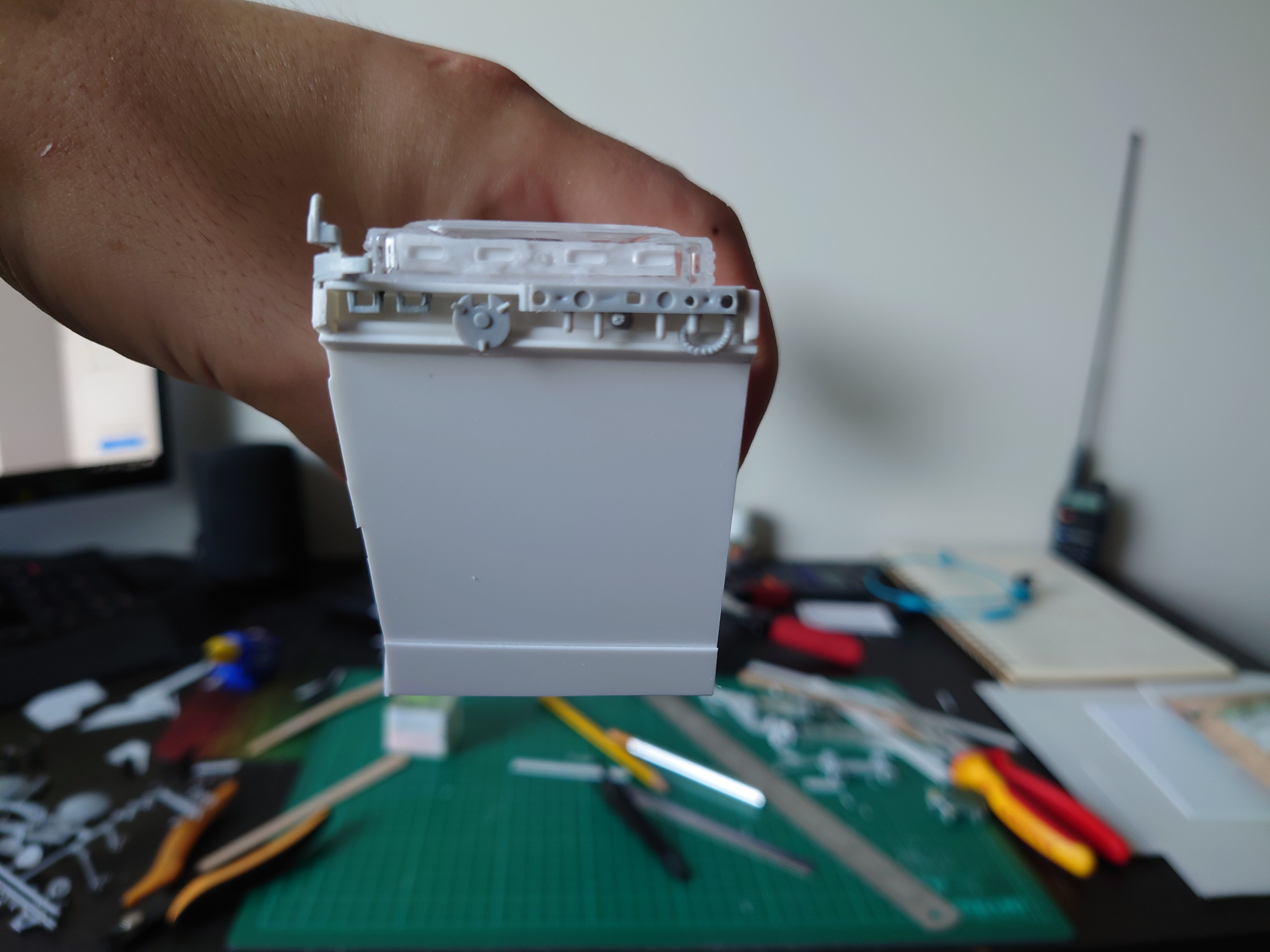 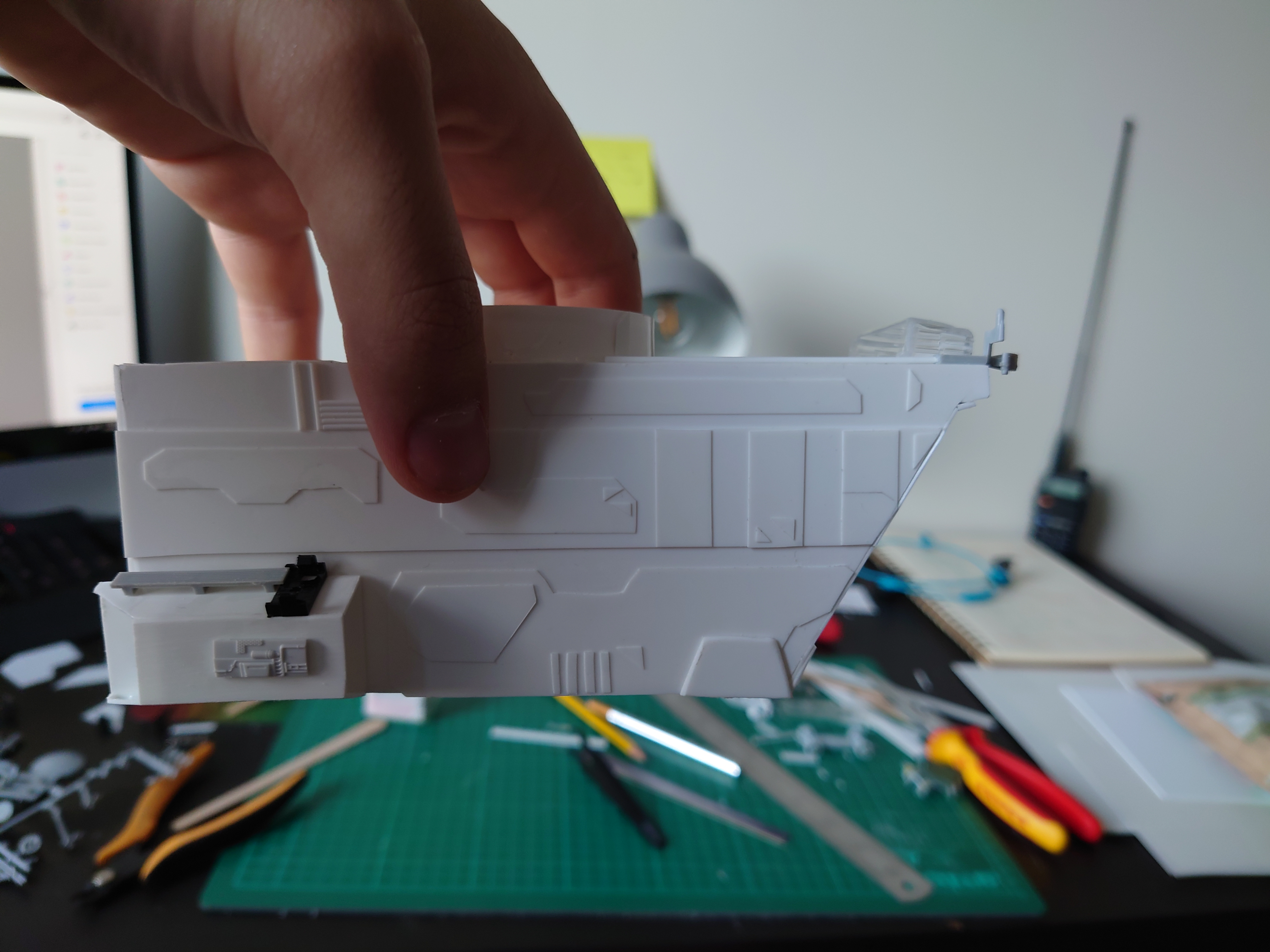 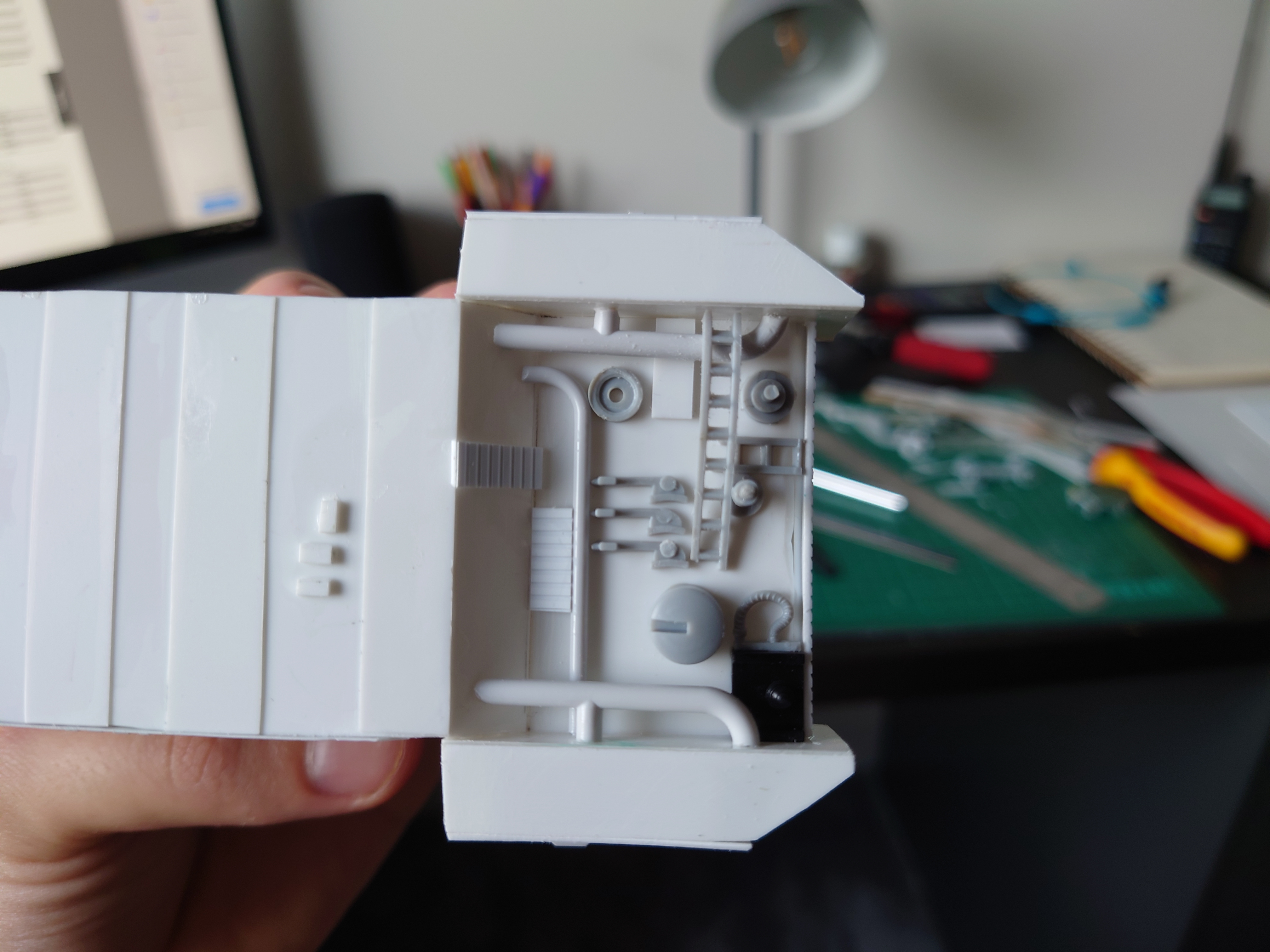 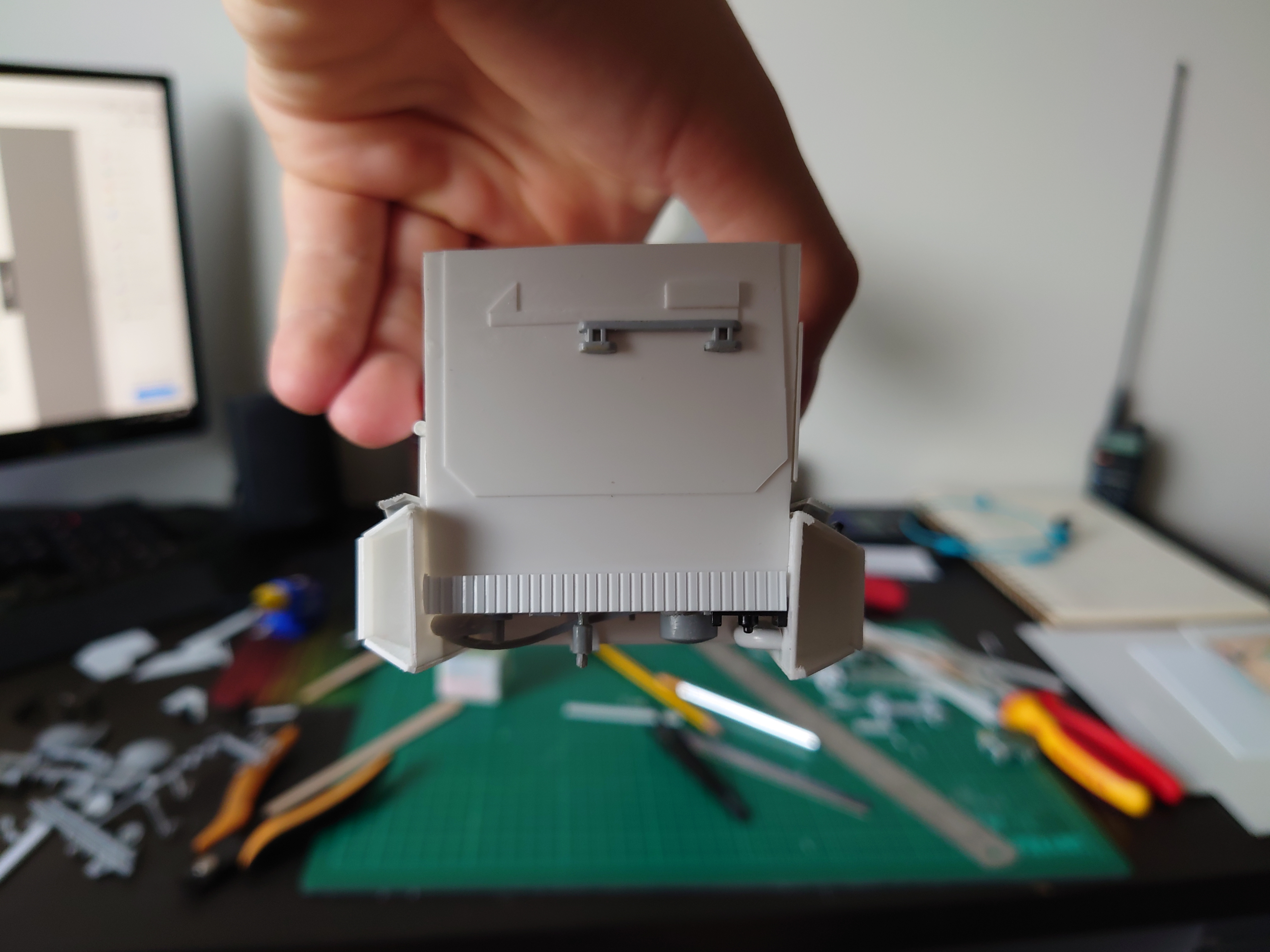 Having got the rough shape together I decided it needed some manipulators so made some out of some styrene section and train parts:

The cockpit piping is made out of solder 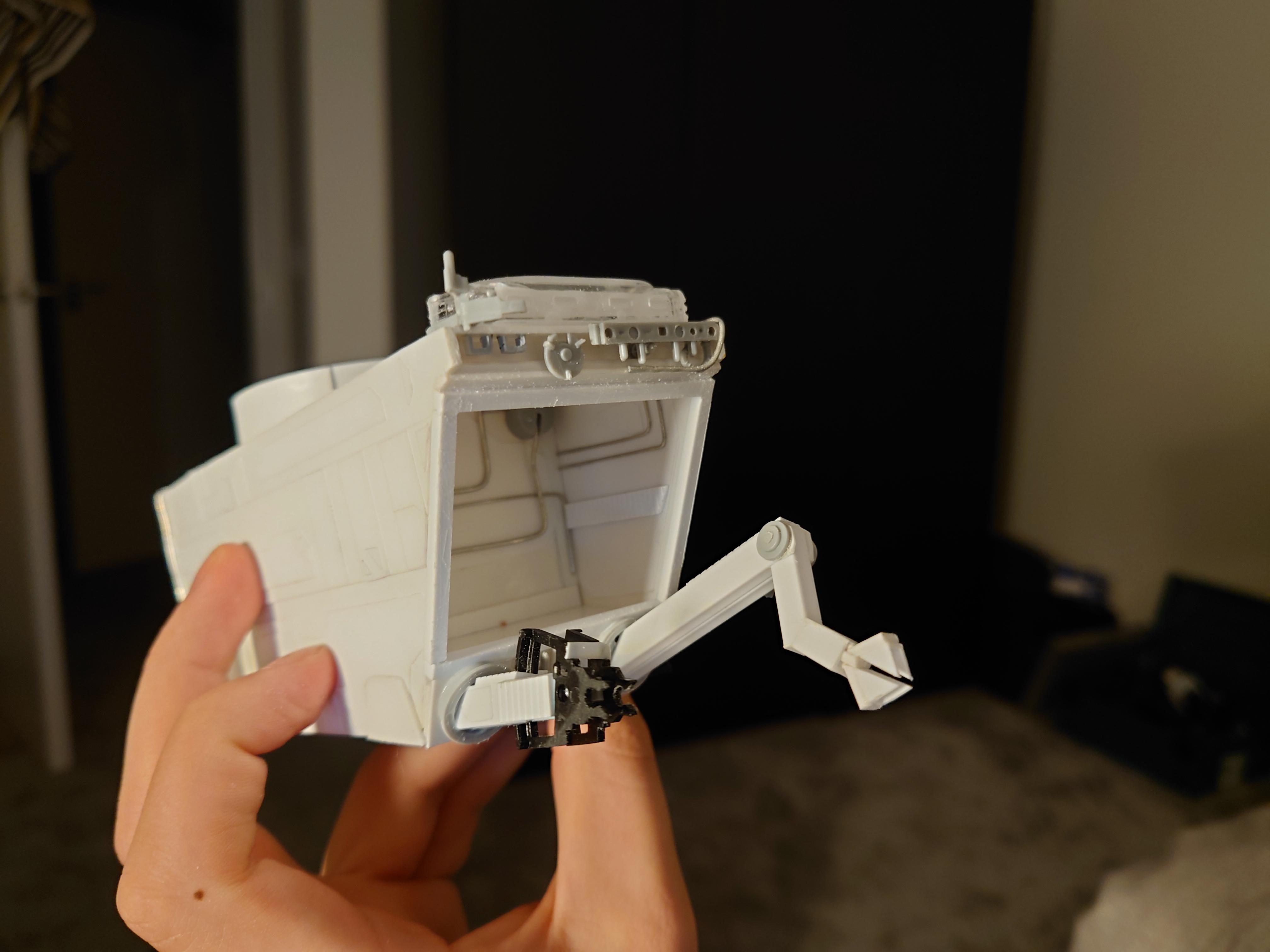 It was at this point I decided that the operator needed somewhere to sit so started knocking up a chair however the scale just looked weird to me so I binned off the idea and went with a console instead which I fitted and decided not to take any picture of doing for some reason... 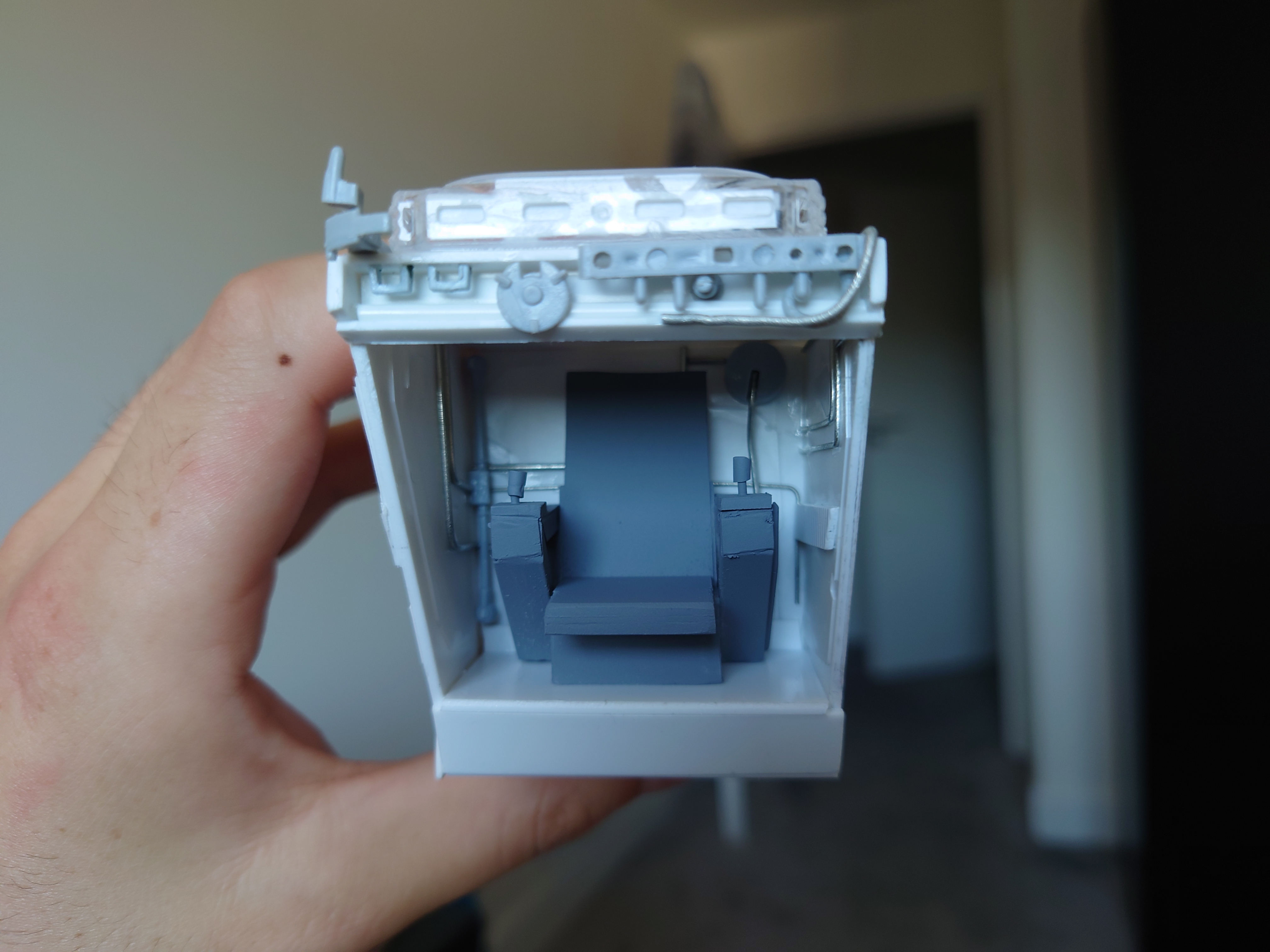 and that pretty much sums up the construction part! 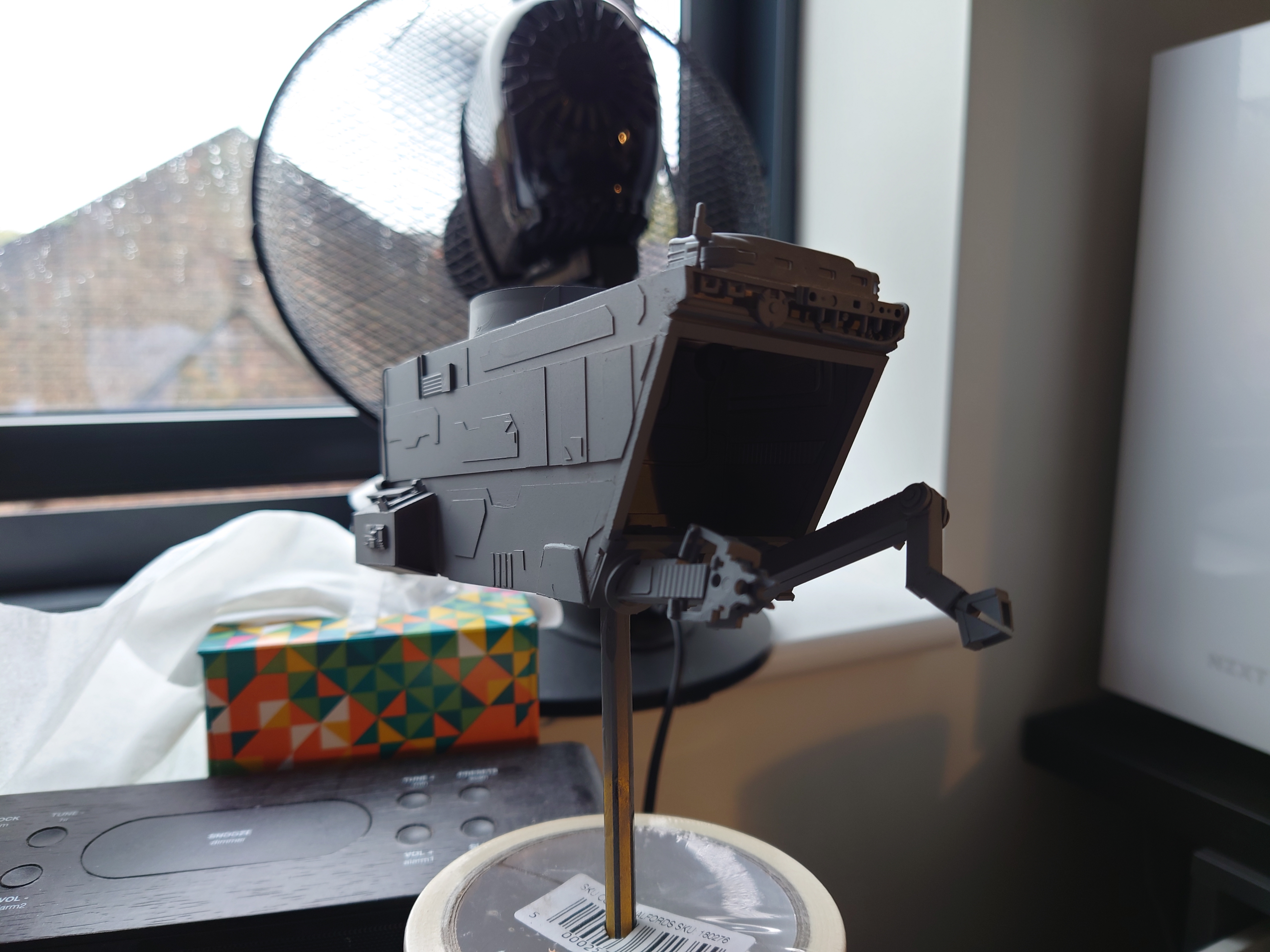 Tips, advice and critique welcome and invited! thanks for looking.
M

That looks really great, very believable design- it looks like the details you’ve added are functional pieces of equipment, not just a bunch of parts! Are you going to add a figure in the cockpit? It adds a nice scale reference to the model. Some thrusters would be cool too.

mcusanelli said:
That looks really great, very believable design- it looks like the details you’ve added are functional pieces of equipment, not just a bunch of parts! Are you going to add a figure in the cockpit? It adds a nice scale reference to the model. Some thrusters would be cool too.
Click to expand...

I haven't added a figure, making something to a particular scale is something I'm still working out how to do properly, so far I'm going for the "what looks about right" technique

So now the painting begins, I really struggle with the painting part, I feel like I'm getting there slowly but as you'll see I did make a fair few cock ups on this build, but that's part of learning!

The first thing to do was to decide what colour to actually paint the thing, it was at this point one of the Viking vessels sailed past my ship, the bright yellow and contrasting black is very Chris Foss-ey so the decision was made! 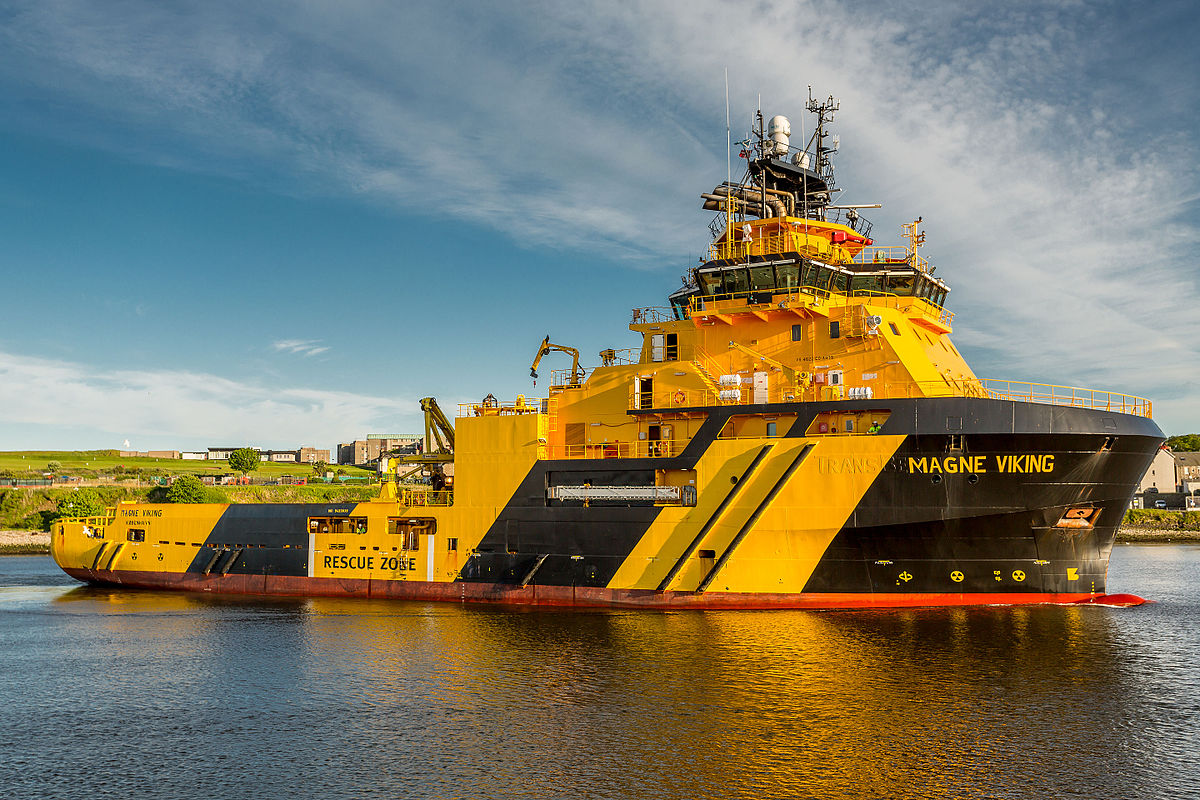 Observant people might notice that this was the ship that was in the film Tennet.

So the first step was to head down to an automotive store in the UK called Halfords and find some suitable coloured paint.

This was where I made my first mistake... Instead of buying a nice thin automotive paint I unwittingly bought a couple of cans of much thicker 'art' paint. 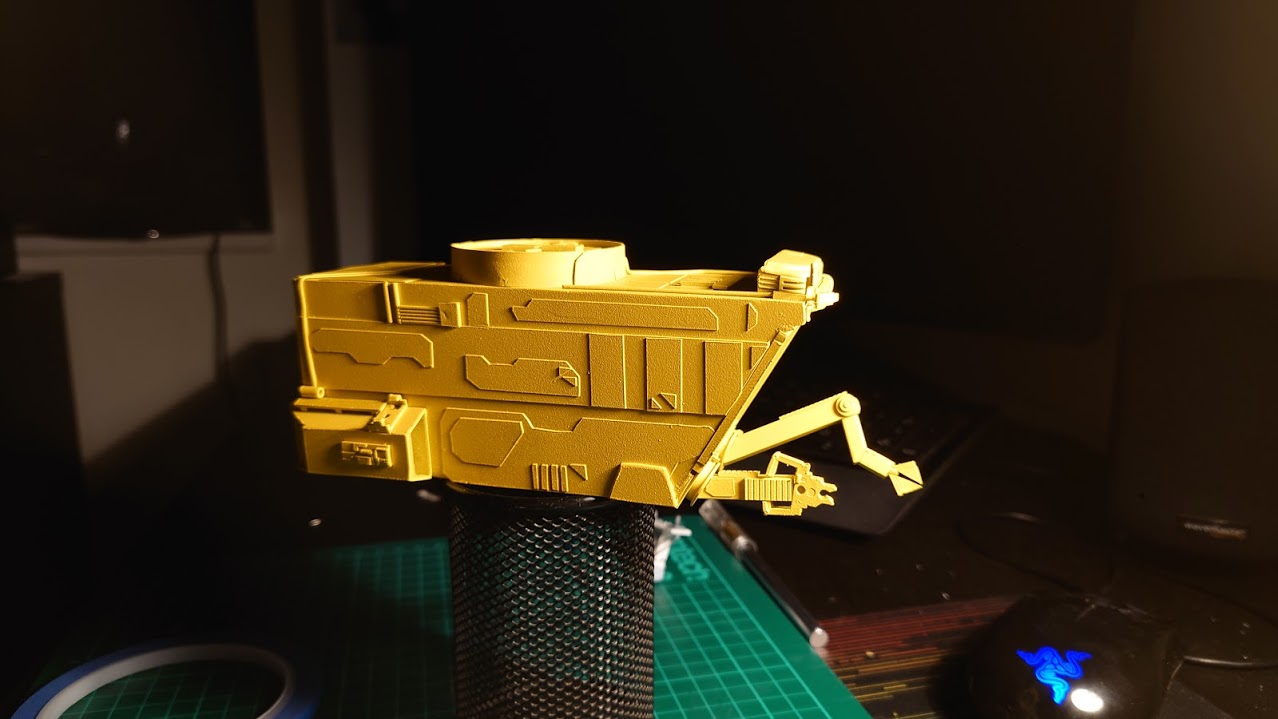 As you can see it gave the model a weird orange peely texture which was pretty annoying, I decided to roll with it and hope it turned out alright in the end. 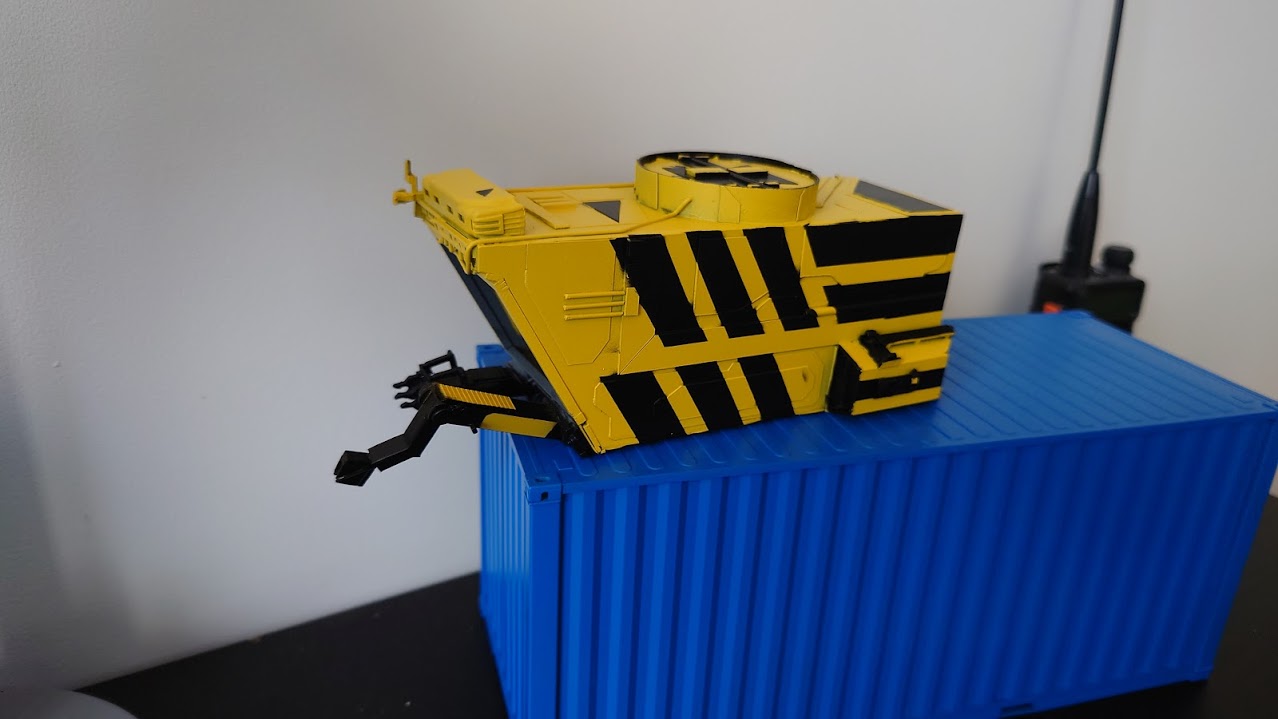 Next was the stripes, I apologies for the strange angle but this was the most in focus picture I managed to take... there was a fair bit of weeping under the masking tape but I touched that up later with a brush.

So the container you see in the picture below came with a bunch of different decals for painting it up in a CSL livery. I stole some and added them to the model.

then mistake number 2, I applied a black acrylic wash to the model not realising that you need alcohol to wipe it off, it tuned out alright but another one for next time. 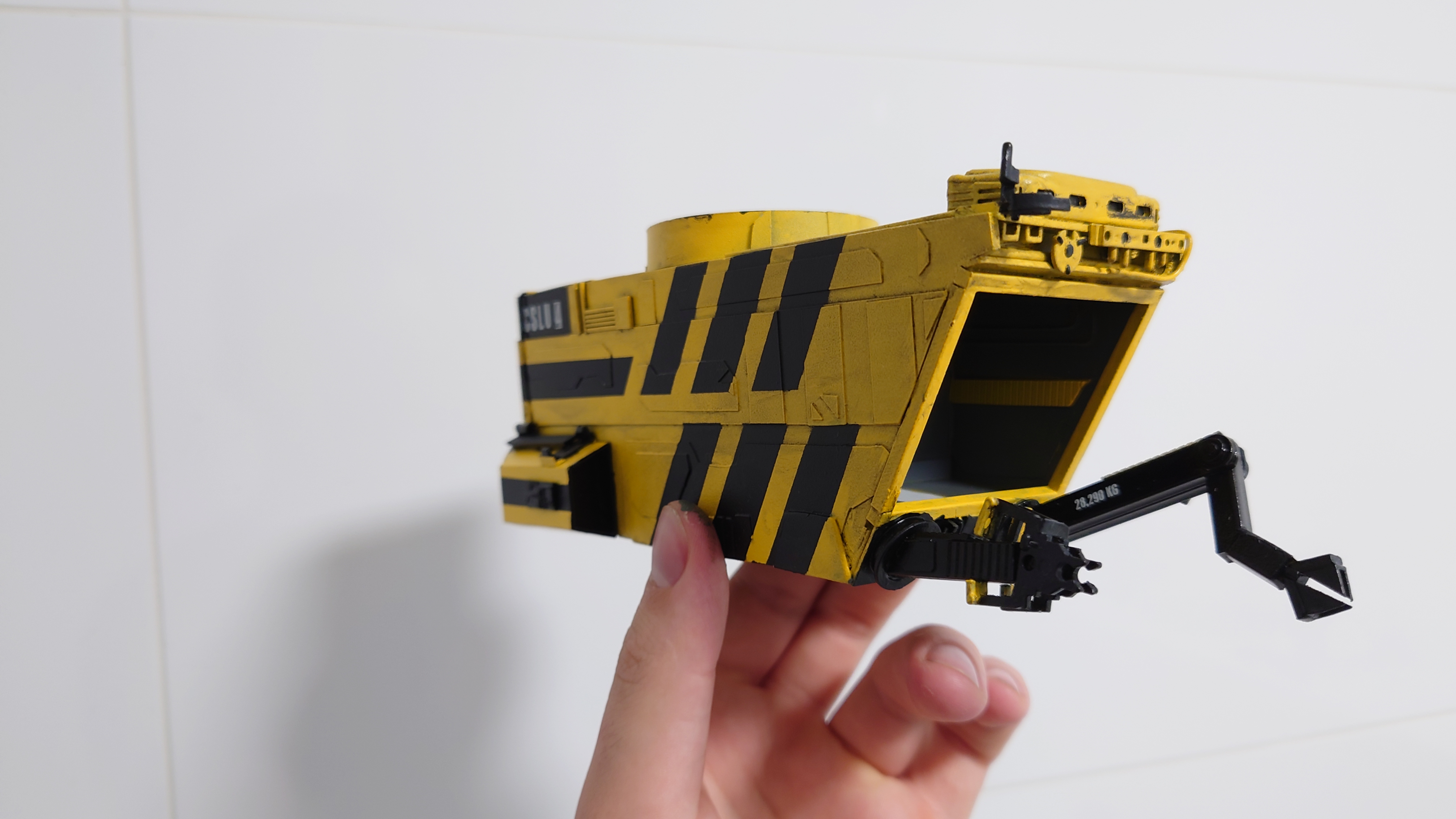 So that pretty much summed up the paint scheme, Now it was to have a crack at some rust streaks as I figured everything working on a space building site would be covered in rust and other crap. 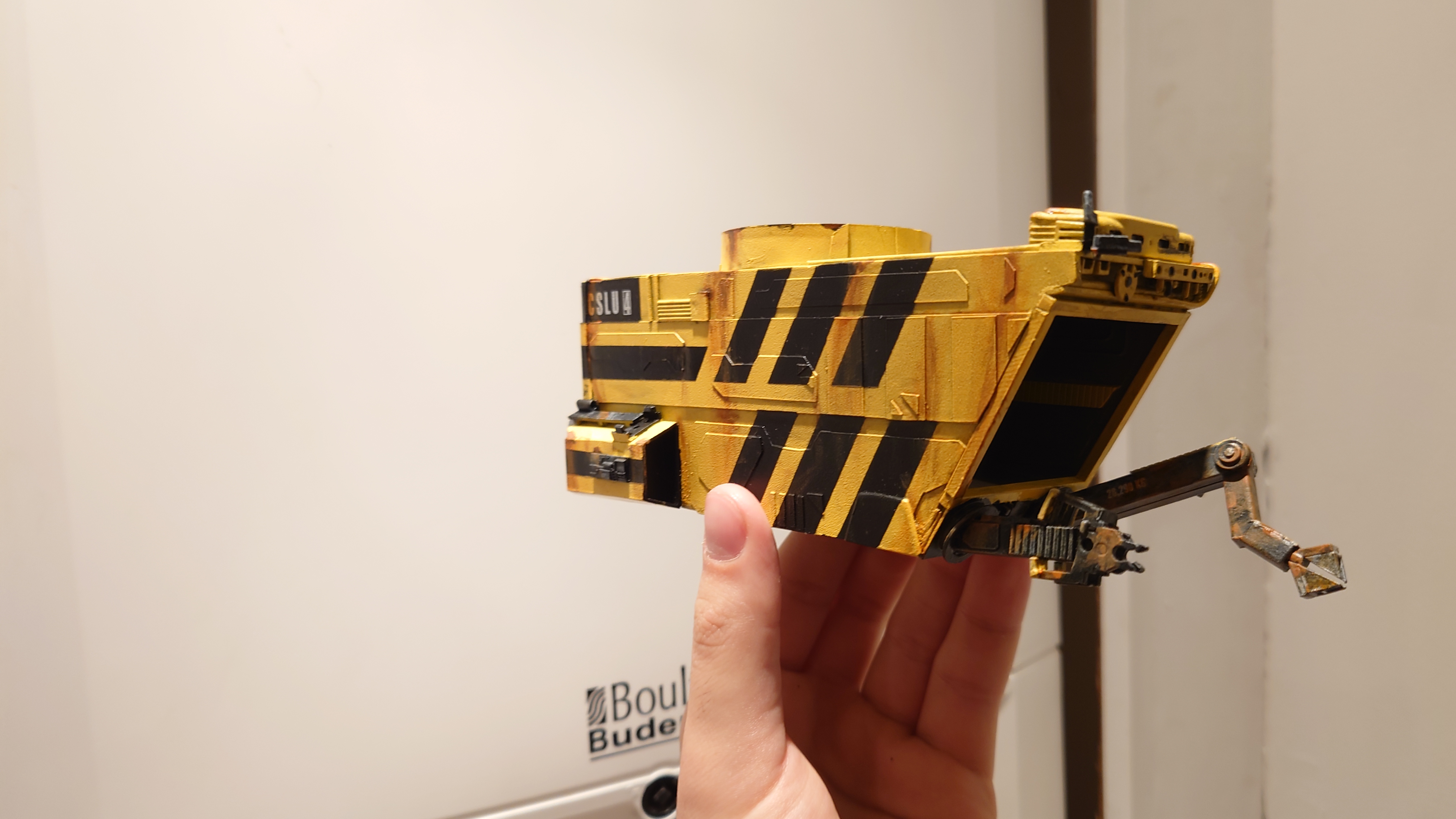 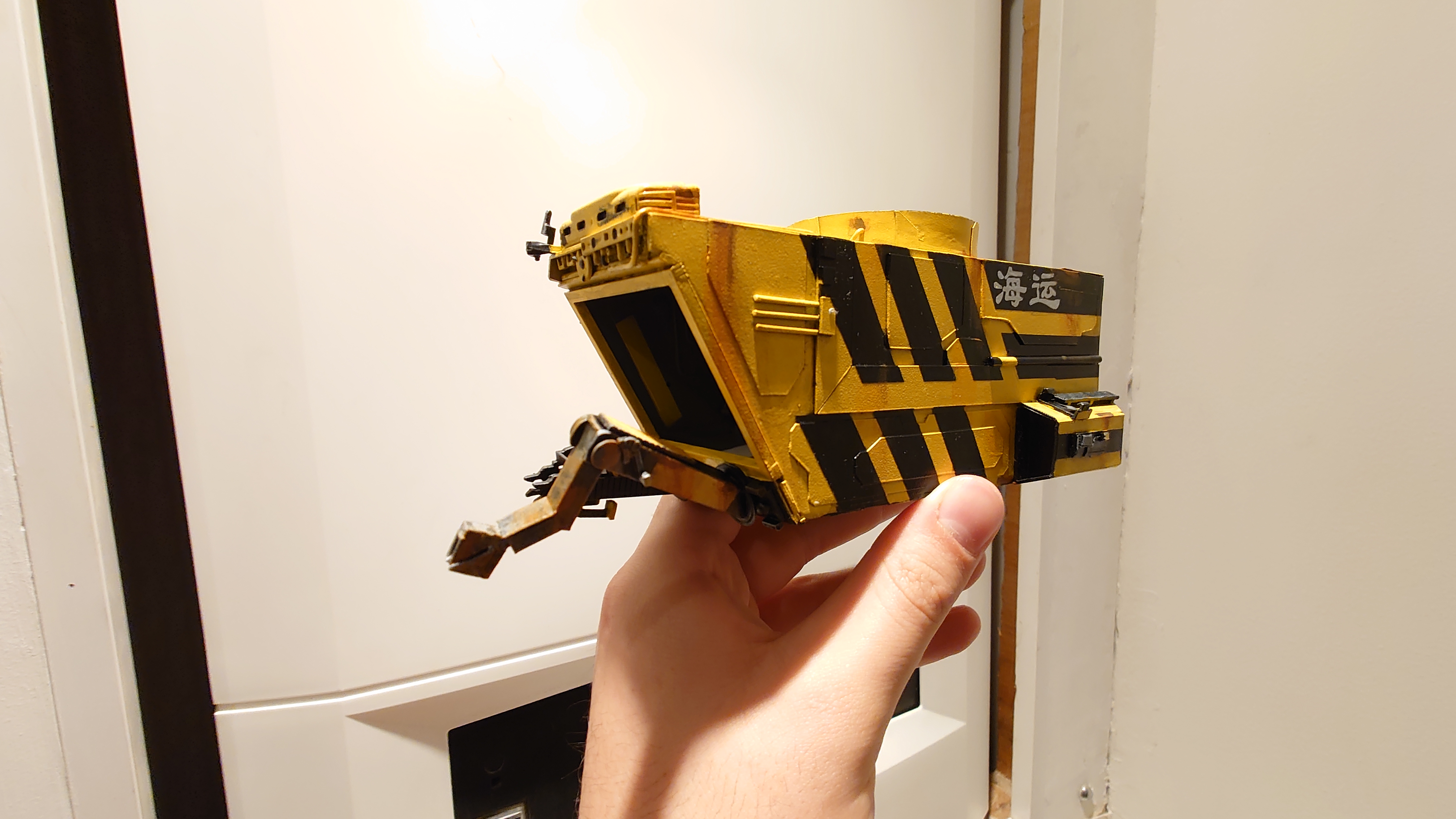 I also Finished off the cockpit with it's pedestal for the operator: 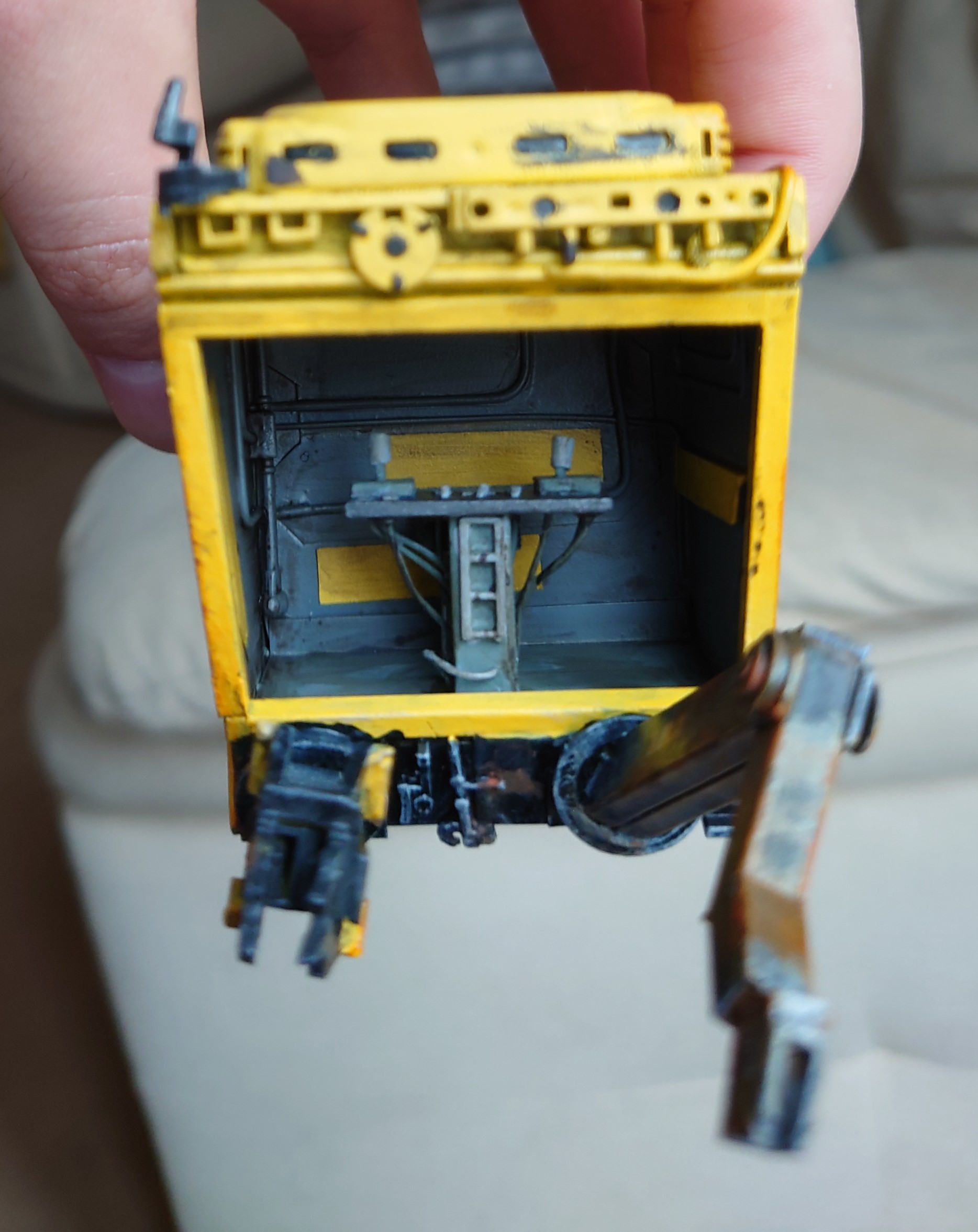 and that concludes this build, I've got a lot to improve on but I'm getting there!

The main thing I'm going to work on for the next project is taking progress photos that are in focus...

I love the color scheme. Cool design and excellent finish!

But overall, built from a shaving cream top and shaver cover, I fully approve this build! (not that my opinion matters)

I like it...reminds me of some of the concept maintenance vehicles from NASA or 2001 A Space Odyssey

Looks great!
For future reference, though, things don't rust in space. But it looks fantastic.

But overall, built from a shaving cream top and shaver cover, I fully approve this build! (not that my opinion matters)
Click to expand...

Thanks man, good idea about the pipes and hoses, sounds like a great way to add another level of detail!

Axlotl said:
Looks great!
For future reference, though, things don't rust in space. But it looks fantastic.
Click to expand...

Yeah now you point it out things oxidising in a vacuum doesn't make much sense, oops! Rust probably wouldn't streak either if it did occur with no gravity...

I'll go with the ship has spent a lot of time parked in a planets atmosphere where it rains a lot!

I like the color scheme a lot. As for space compatible weathering, we can pretend the ship lives in a parallel universe where space has moisture and gravity. It looks great.