So I've been lurking on the these boards for around 6 months and finally got a membership a month ago. After doing some more perusing through various aspects of this wonderful site I've decided to make my first post. First of all, I guess I should introduce myself and tell my story... ...don't worry. I'll keep it short.

I've been kicking around the idea of building a Predator costume for about 2 years now. I was at work during a remodel and saw a guy walking around on construction stilts putting up ceiling tiles. My first thought was that he was about Predator height and how awesome it would be to build a full Predator costume. So I planned on buying some used football pads, then buying a mask, and gloves and then making it all somehow work. That's when I turned to the internet and, one way or the other, I ended up on a gentleman named Shawn Thorsson's website blog thingy.

Lo and behold, his link led me here and to Monster Makers and thus I began my journey of creation.

Wasn't too bad was it? Anywho...I basically took his duct tape dummy idea and started there on my skin. So far I have the upper torso and finished yet unpainted. I hope to have the legs done and the torso painted soon. I'm gonna try and do everything as step-by-step as possible for my own edification and to hopefully inspire or help out a fellow Hunter....ooo...it's just cool referring to myself as a Hunter....ooooo....aaahhhh. Anywho...now on to the pics. 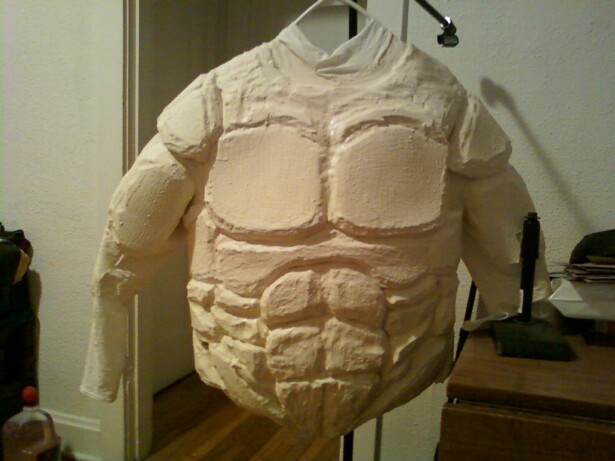 As you can see from the above. I put on my little leotard (must say I got some odd looks when picking up a box of liquid latex and a package that said CHEERLEADING.COM on the front from my local UPS outpost) then marked how I wanted the muscles to go in relation to my own for orientation purposes.

Then I used some foam pad and Fabri-Tac to cover the suit in the muscles to my liking.

Here's the pad that I used (from Wal-mart): 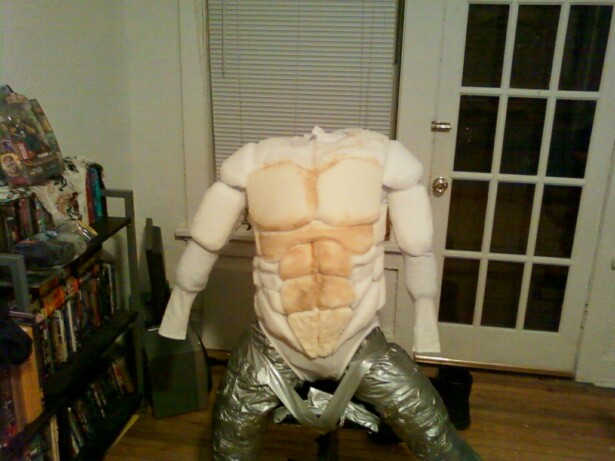 And the Fabri-Tac (also from Wal-mart): 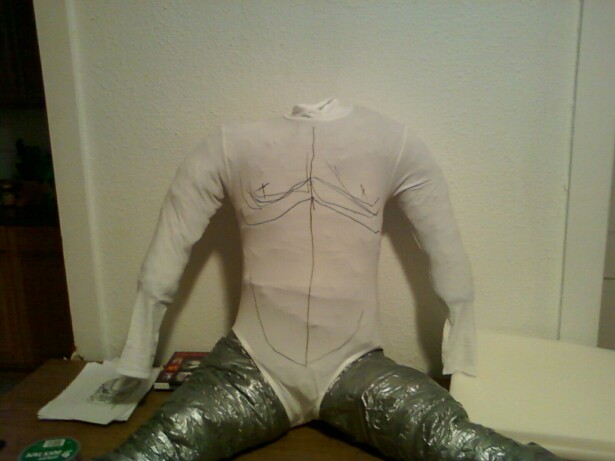 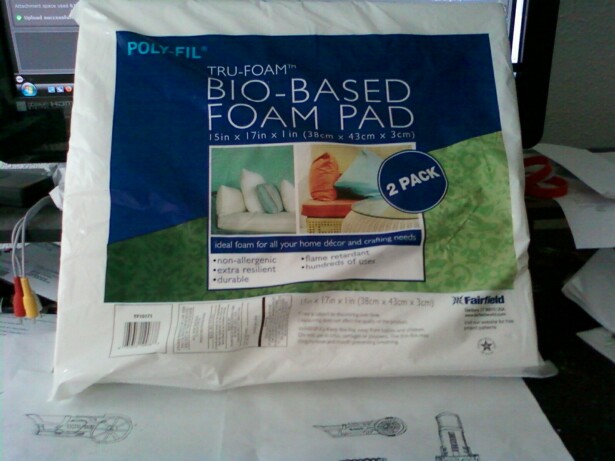 Finally, here's after adding 5 layers or one entire gallon of liquid latex: 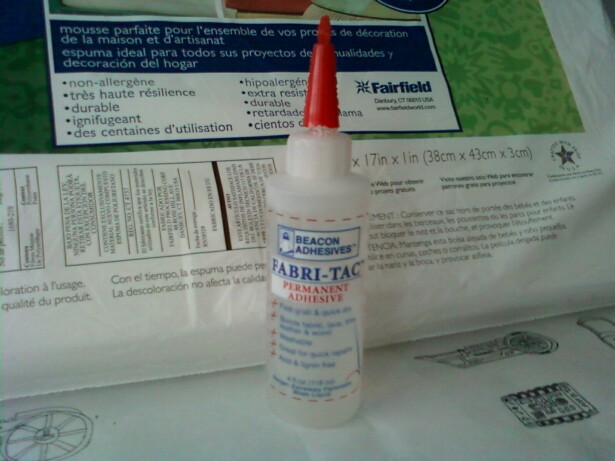 Next time...or when I start work on the legs...I'll use a hot glue gun (Fabri-Tac is around $7 per 4 oz bottle) and maybe seal the foam with some thinned Elmer's glue to try and reduce the amount of latex used.

That's it for now...any comments or criticisms are welcome....I'll be painting it by the end of the month if all goes well.

P.S.: After being around this place and going through dozens of threads I must say that this place has thoroughly impressed me. Everyone seems very helpful, intelligent, and mature with a nearly complete lack of trolling and in appropriate comments. Cheers to you all and to my fellow Hunters...HUZZAH. It's good to be here.
Last edited by a moderator: Feb 23, 2015

Welcome. I'd say that you're off to a good start on your skin. Good luck and can't wait to see more.

Great start!
But may I suggest that instead of using
glue to help you use less latexn,
get some caulking as its a bit thicker and will settle in very nice!!
G

Finally an update. About two weeks ago I received my airbrush gun and paint and was finally able to paint my upper bodysuit. I tend to get all excited and forget to take pictures in the between steps. I also recently got involved sculpting a bio and haven't updated because the clay keeps calling me. Anywho...here we go. 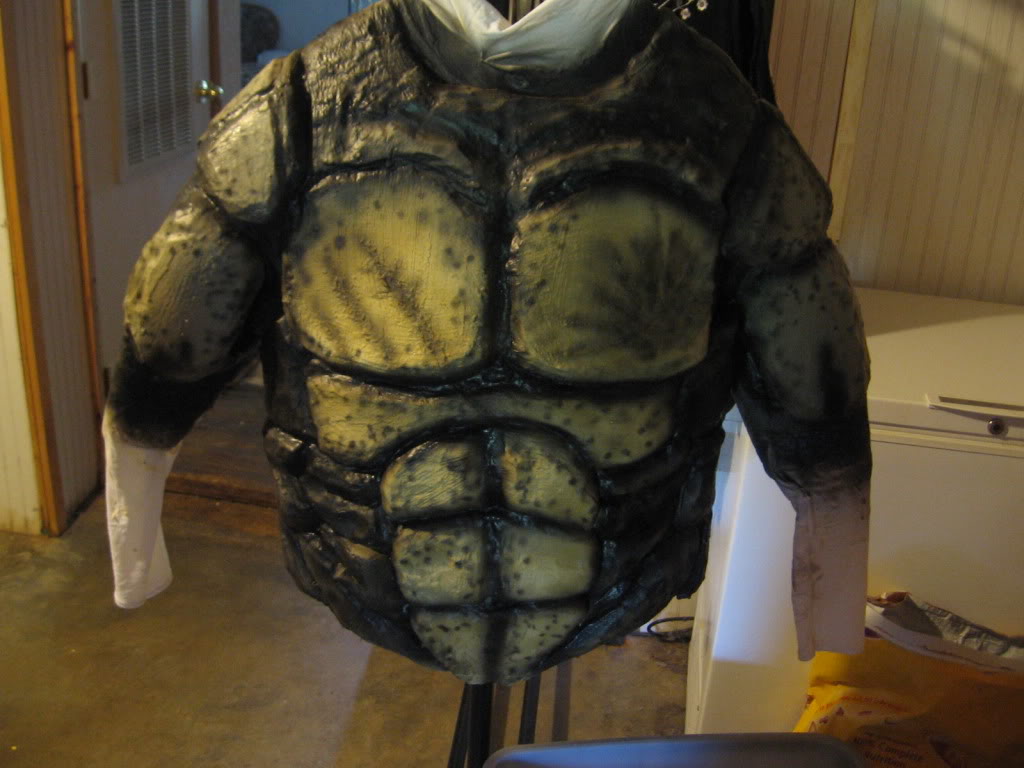 As you can see I did quite a bit of painting and pardon the imperfections...it's my first time using an airbrush and a really cheap one at that...I must have cleaned it five times during the process...but damn it was fun.

And here's the back view: 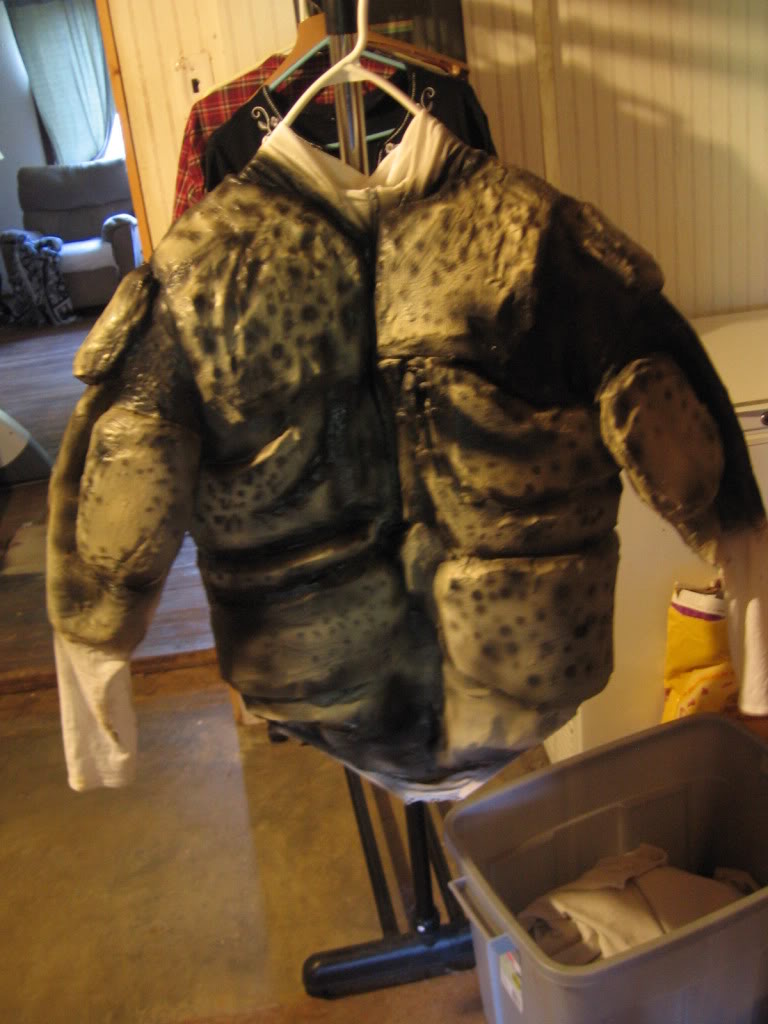 Finally...one of me wearing the beast...she's a pain to get on but no pain no gain right? I did break the zipper before I painted it when I tried it on so I'm either gonna put on a crazy heavy duty zipper or use ties and have someone lace me up like a really frickin' sweet corset. 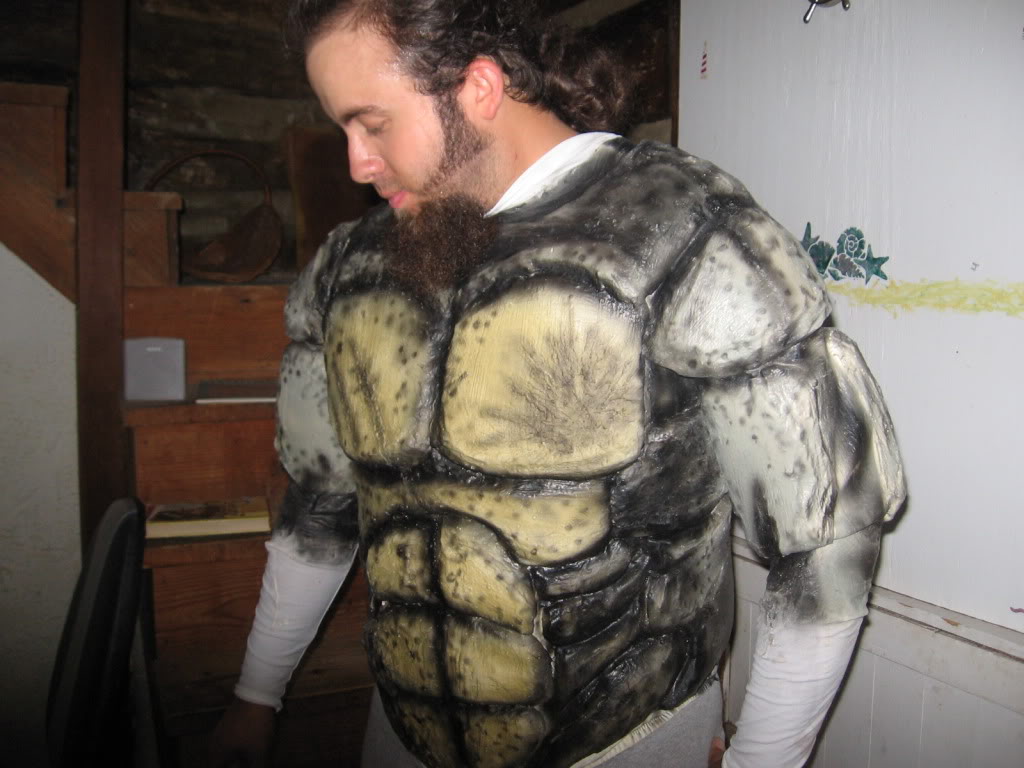 Next I'm gonna finish adding black...mainly around the collar and further down the forearms...then I'll seal it with perma-wet. The scars I came up with randomly...since I've never seen any scarred Pred bodysuits. So I painted on some Alien scratches on one side and a blast mark on the other with liquid latex then added some shading for more depth and gnarliness.

A couple points for future reference. Elmers glue does not really bond that well to latex in the long term. Thinning latex with water weakens it. Better to thin with Ammonia if anything. Silicone caulking, unless you are using Shinetsu, does not bond well to latex as well as a great many other materials. Shinetsu bonds like gangbusters though.
You must log in or register to reply here.
Share:
Facebook Twitter Reddit Pinterest Tumblr WhatsApp Email Link
Top