deck5 said:
Surely you'll chisel out the little round corners the router couldn't get into? (Nice work, btw!)
Click to expand...

I'm undecided since they weren't on the eccleston tardis.

Ah. I bow to your superior research, in that case.

Yesterday's work finished up the posts by putting plugs in the tops.
I decided to use PVC to fill the top of the posts because such a small piece of wood like this is the kind of piece that might split in time and PVC never will.

I began by building another jig / template for use in routing out a pocket in the top of each post. It slips over the end of the post and is held in place by a clamp. As the posts are so long and if I can, I always do routing outside because even if using dust collection, it's a mess, I put them in the back of my truck at an angle where I could easily reach the ends. I used another pattern router router bit, this time a little longer because of the 3/4" depth needed for the PVC plug.

I also used a pattern bit in my router table to make the actual plugs. The first step was to create the mater that fit snuggly into the post, then double stick carpet tape is used to attach the master to the oversize cut PVC and then the bearing guides on the master cutting the plug to the same exact size.

The finished plugs were glued into the posts with Gorilla glue, again taking care to dampen the contact area and using gloves to keep it off my hands. I also found a couple of them wanted to push out when the glue started foaming and I had to quickly put a couple nails in them to prevent it. Had I realized this would happen I'd have set up clamps to hold them in.

Can't wait to see how this turns out!

I am thankful I took a wood working course so i can use all the tools you have otherwise I'd be screwed myself, it's so cool to see what you're making.

Wow! That's going to be a real stunner.


Rebelscum said:
I've been researching Tardis builds at the Tardis Builders forum. The process has been somewhat painful as the BBC, who owns the rights, approaches sharing of information in a polar opposite fashion to Lucasfilm, who embraces fandom in areas like R2 building and costuming. It doesn't help that the webmaster of the builders forum once removed my offer to laser cut pieces for Tardis consoles for builders for free, because of what it might lead to.

Anybody that's ever tried to build a Dalek knows exactly what I'm speaking about.

As such, there is essentially no excahange of real information, making the process quite difficult. Much more difficult that it really needs to be in my opinion.
Click to expand...

This really baffles me, actually. Just from being on these forums, it's pretty clear that people not affiliated with the BBC really are more than willing to share whatever information they've gleaned. If anyone on the TARDIS builders forum had worked out an accurate set of measurements, why on Earth would they keep them from other, like-minded people? It seems to me that if they're not going to share information, they may as well not exist. Furthermore, when there was a Crashed TARDIS on display outside the Millennium Center in Cardiff, apparently not roped off in any way, how come no TARDIS-building enthusiasts were down there measuring every little bit of it?

Anyway, that's my rant. Really enjoying your build. Can't wait to see how it turns out.

How did I miss this thread? Bookmarked!

Great start to the build thread, Philip, thank you!

I have often thought of building one of these for the backyard and using it as a tool shed or something. Obviously, it would not be totally accurate since I would need heavy varnish on it or something to protect it from the weather. You know, like a real police box had!


Dont forget, you can always offer to laser cut stuff for people here and not get your messages deleted! :love

Thanks for sharing the details of this. I am sure it will turn out beautifully, like your Djarik tables and everything else you set your mind to!

The base is a place where there are many options for how to build it. I had planned to glue together 3 2x4s into a profile that would form the perimeter but ended up buying some large 4x6 timbers and cutting them down with machines in the shop. If I didn't have access to a jointer and planer, I'd have used the 2x4 plan instead. My base design incorporates the square holes in it where the posts will stick down through the floor. Because I did it this way, the perimeter frame is more beefy than I would otherwise have used, but at this way it will be really strong, though heavy. One thing I noticed right away when laying it out is it's really big on the outside. ;-) Just looking for a 5 foot square open space on the floor is a bit of a task. 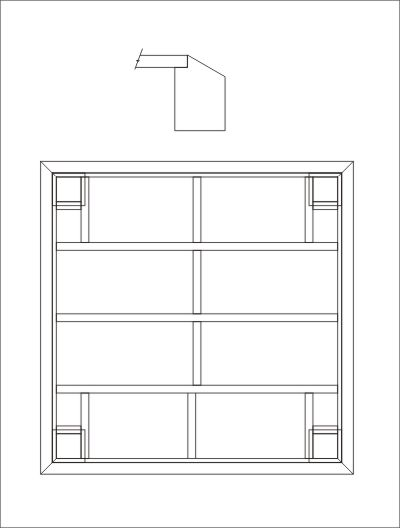 I bought two 12' 4x6 treated timbers and had Home Depot cut them in half. My final profile is 4.5" x 3" so I sliced of about 5/8" from the 6" side using a bandsaw and took each through the jointer until I had a square edge on adjacent sides. Then to the planer to bring the opposite sides parallel and straight, then reduced the profile dimension flipping it over each time until I hit the target 4.5" x 3".

Are you a wizard?

No seriously, this is Impressive. And the tardis too

Keep up the good work.

Should we call you "Norm Solo" or "Han Abrams"?

The base is pretty big and pretty heavy, and realizing that, I have modified my plans for it a bit.

To start, I'm not going to permanently attach the floor to the base structure. It's not needed because it sits in a pocket made up around the perimeter in a rabbet, and when the posts are plugged into the base, they will overlap the floor in each corner.

I have also removed one axis of the base floor supports as I think it will be plenty stiff without those.

As the boards were about 72" long, after first carefully selecting which edge to cut, I first ran the long 30 degree slopes on each board on the tablesaw.

The base itself is 60" square and I chose to form the corner joints with large miter joints, each with three #20 biscuits in each. I again carefully selected which end to miter first, considering where to cut to get the best 60" finished piece from the 72" piece.

Because this is a huge miter cut to make accurately, I clamped the board to the saw and ensured it was completely supported and level for each cut when it hung off my table. Even my 12" miter saw didn't completely go through the cut as the motor housing on the right side of the saw hit the top of the board before it complete the cut. I finished the cuts with a handsaw.

The next step was to cut the rabbet on the long edge that would become the notch for the floor to sit in. I used a dado blade in the table saw set to 3/4" width and 11/16" height, which matched the baltic birch plywood being used for the floor.

The way the biscuit slot cutter works there wasn't a way to set up a fence guide for the three different locations at each miter joint so I used three different spacers under the cutter. Because you lose your ability to align the cutter this way, I tacked guide boards on either side of the housing to guide the cutter. I just put them in there evenly across the miter joint.

And here is the base glued up with Titebond 3 glue and clamped with two cargo straps where I used corner spacers available for smaller band clamps. I used a baltic birch plywood for the floor because it comes in 60" square sizes and this way I didn't have a joint in the floor what would come from normal 48" wide plywood. The base is just sitting in there as it was an easy way to ensure the perimeter was square. I just tried to pick it up to move it inside and have confirmed it's definitely too heavy for one person with the floor in it.

Next up I'll be adding the base internal supports, which also make the socket for the bases of the posts, and cutting the square holes in the floor for the posts to plug through.

Oh that is definitely the heaviest bit. I love your method though! Very tight and sharp! I'm loving watching your progress and may have to ask you questions when I start my MKII

Wow! I mean....just WOW! I am going to be watching this thread very closely.

I finished the inside structure of the base using cut down 2 x 6 framing material. First the corners that the posts will socket into were positioned with spacers cut to the final opening size of the post insert then the larger pieces were added. So I wouldn't have to screw from the outside of the base, I used an inexpensive Kreg Pocket Hole drilling guide for most of the joints, in addition to glue.

Finished base structure below and then a photo of the Kreg setup.

Not much of an update today.

I made the holes in the floor for the posts to stick into. This was done again with a router and a bearing guided pattern cutter. First I marked the location of the inside of the base structure that surrounds the posts. I transferred that to the surface of the floor and drilled a hole in each corner a safe distance away from the line. Used a jigsaw to cut between the holes and then used the router bearing on the tip to guide against the pocket underneath the floor, creating a matching opening in the floor with the support pieces in the base.

Here's the updated base design. 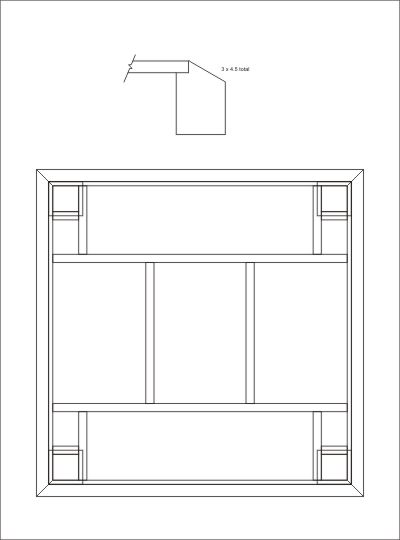