*Update* Putting the video of the finished piece up front

I don't normally show off my personal projects but my friend at Sorenzo props has convinced me to make a post on here. I've been working on this prop for nearly a year now and it's almost finished. Of course I've been saying that for more than 2 months now :facepalm

The Idea was to make a folding replica weapon from the Mass Effect Franchise without altering the aesthetic design too much. Unfortunately unlike the game I have to obey the laws of physics so some compromises had to be made. I picked the Predator pistol because I thought starting off with a small weapon would make it easier, in retrospect not a wise decision. I'm onto the 3rd prototype now and there have been so many redesigns and changes to this thing I couldn't possibly list it all so I'll do a quick run through of the big stuff.

First step, make a pretty CAD model because this is going to be almost entirely 3D printed. I used Fusion 360 to do this.

Prototype one was just to work out the basic joints and motion, I didn't add any of the detail. Everything was printed on an Ultimaker 2. The most complex part is the grip which has a moving panel so the hand guard can go inside.

Prototype two used a simple spring loaded mechanism to open with a small latch to hold it closed. The latch was a little loose though so it wouldn't stay fully closed. I added the details to the model before printing this time and refined some of the joints so they moved easier. With a lot of help from my friend I tested out how to finish and paint 3D printed parts using bondo and primer spray paints,

Prototype three has a small motor inside to drive the mechanism back and forth with latches to hold it both open and closed. So far I've managed to get the motor driving the mechanism but everything is a little loose so nothing opens or closes fully. I still have to perfect the latches to hold everything properly and add in the electronics. I'm starting to run out of space inside this thing though which is making everything that much harder to do.

I'll try to make another update once I've made some progress but If you want to see more and watch me slowly loose my mind trying to finish it.

Big thanks to MAKLab, without them I couldn't do anything and to Sorenzo Props for advice and encouragement.
Last edited by a moderator: Nov 8, 2018

This is an amazing project. I never quite understood how the fold-out weapon thing was supposed to work in Mass Effect but they sure looked cool!

Seriously badass, great showcase of what you can do these days with a 3D printer!
O

Thanks Yeah a lot of the guns folded into impossible shapes and it got worse as the trilogy went on but the first time I saw it I thought that was the most awesome thing I'd seen in a game.
O

A little progress update for this project. I've had to redesign the mechanism because tying nylon tendons under tension is bloody impossible. I've used a lead screw instead and gave it a little test drive.

I've done a lot of work on the latches at the back to make them work too.

Biggest job left is the electronics and the finishing.
Last edited by a moderator: Nov 8, 2018

I like it! I'm really excited for Mass Effect Andromeda so this has made my day!
O

Nearly finished this, just made a new video showing off the working gun with batteries included this time.

<font color="#000000" face="SFNSText, Helvetica Neue, Helvetica, sans-serif"><span style="font-size: 15px; white-space: pre-wrap; background-color: rgb(255, 255, 255);">
There's been a fair few changes since last time I posted, the entire seat for the motor was redesigned so it could hold some limit switchs and prevent the whole thing from twisting itself apart.

I built an entire circuit that uses a momentary push button to mimic a latching push button just because the latching one wouldn't fit. This switch reverses the motor so the gun can open and close.

I then embedded that tiny switch at the very end of the gun which was a part that could be taken off so I had to use circuit board pins to make a connection between the two and then I had to connect that to the circuit.

Of course I then needed to add the batteries which was going to be a rechargeable Li-ion one but after I broke the charging circuit I went with 3 AAA instead. Changing these batteries is not going to be easy!

And then of course I had to put LEDs in it, because no prop is complete without LEDs and apparently I like making things harder for myself. To transmit power from one side to the other without tying them together with a cabe I had to make some custom contacts out of copper tape.

There's a whole bunch of other little challenges and problems I had to fix but I'd be here all day if I talked about all that. Last thing to do is to paint it which, Sorenzo Props has graciously offered to show me how to do. 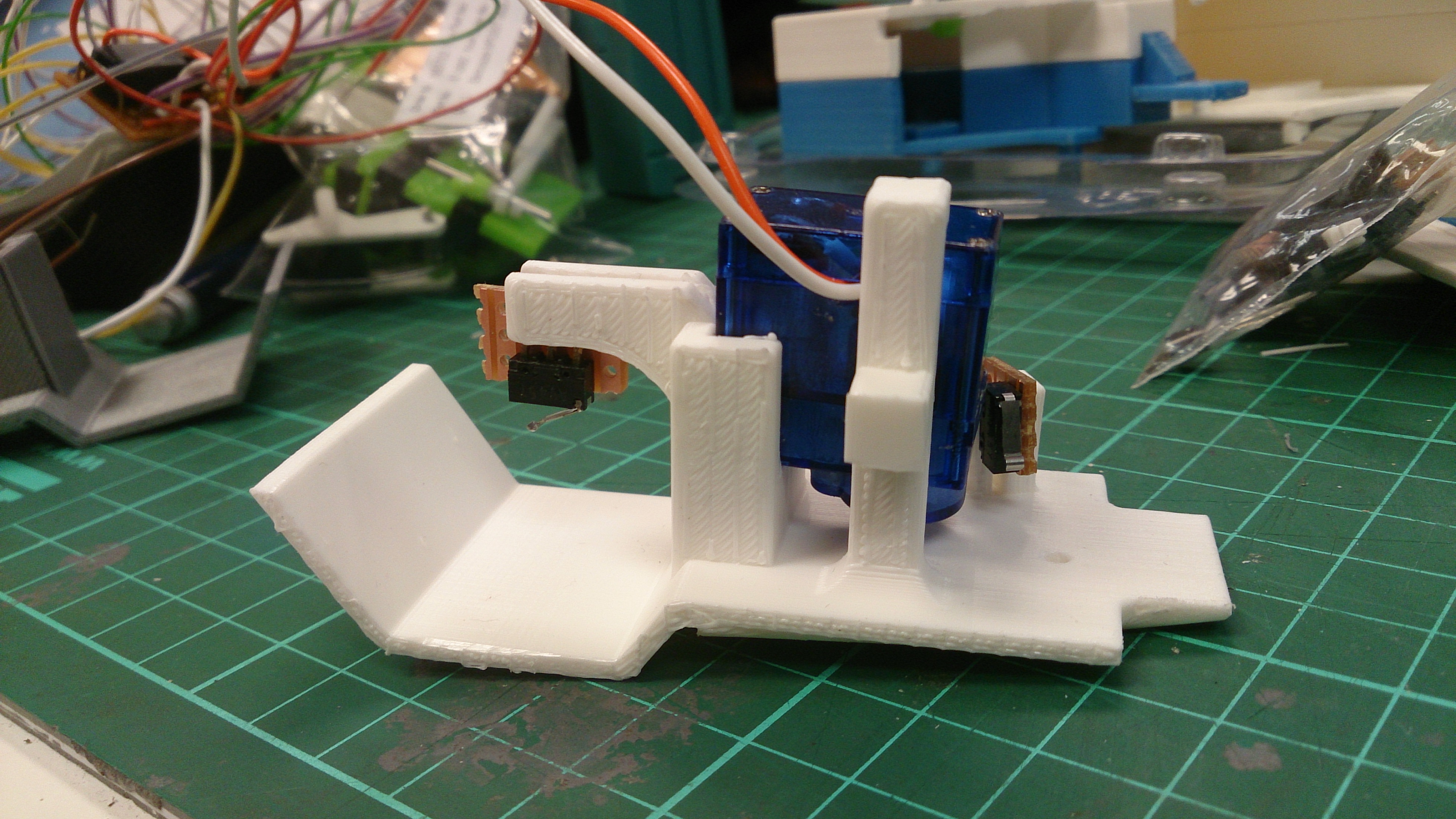 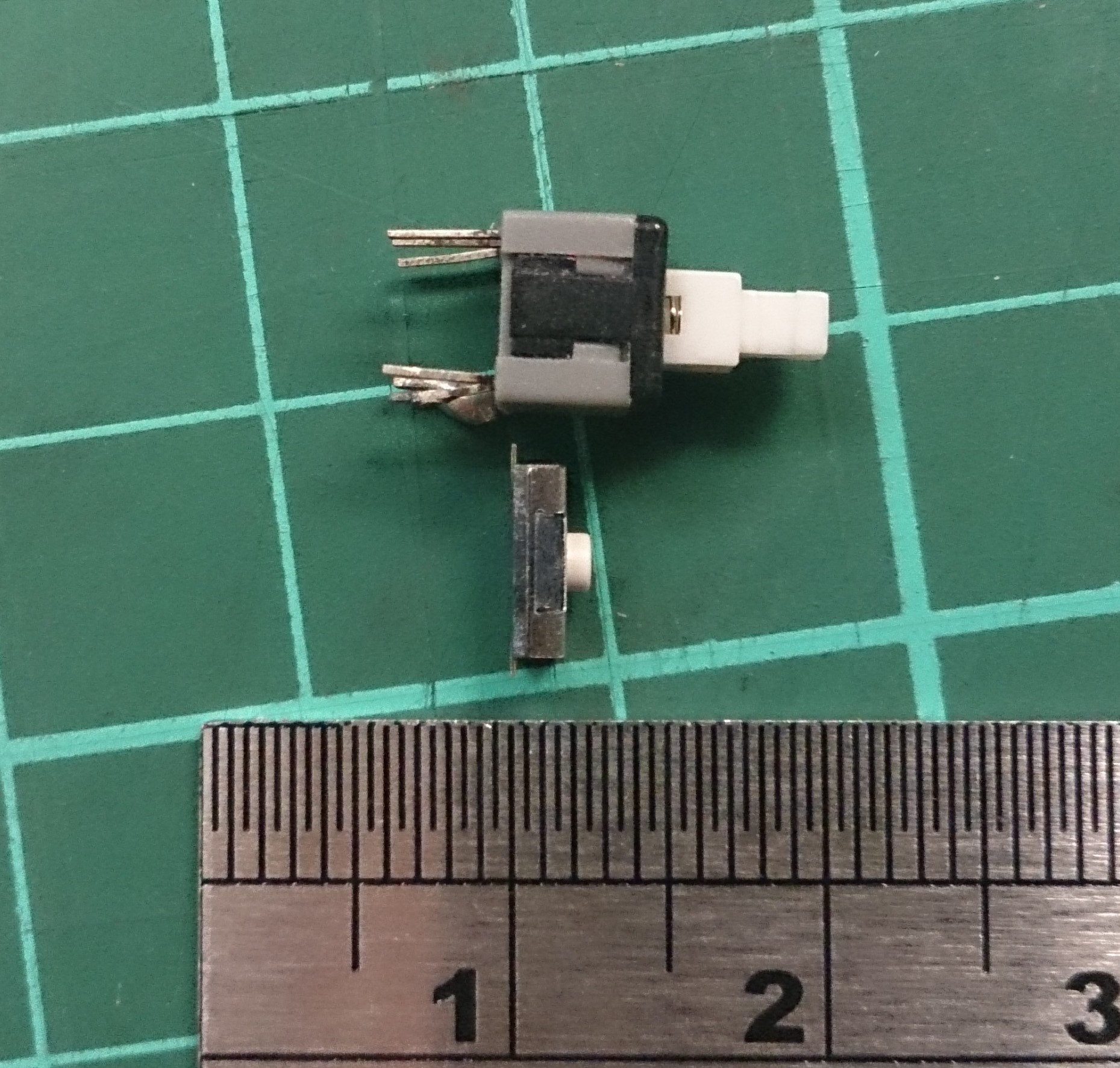 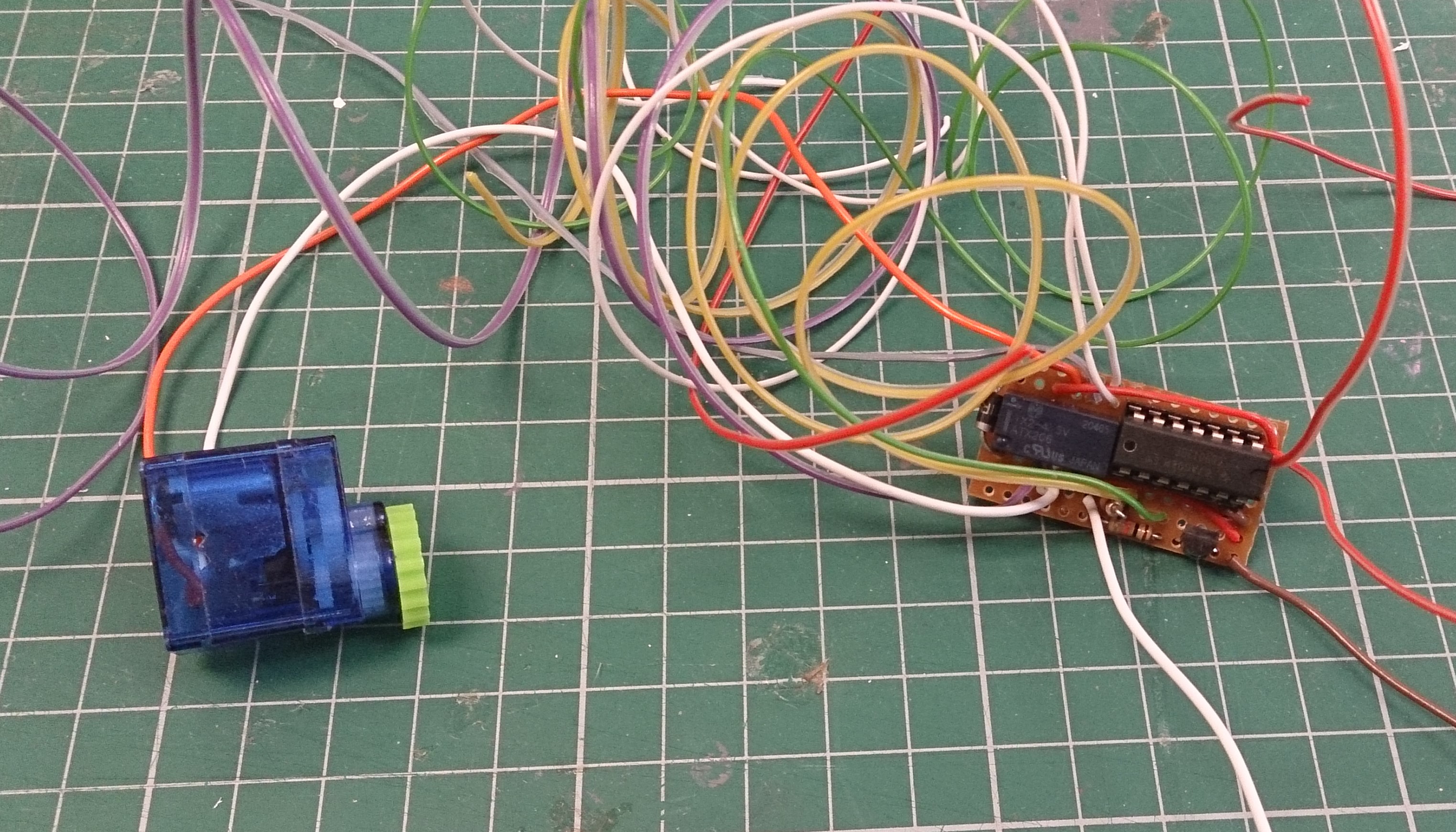 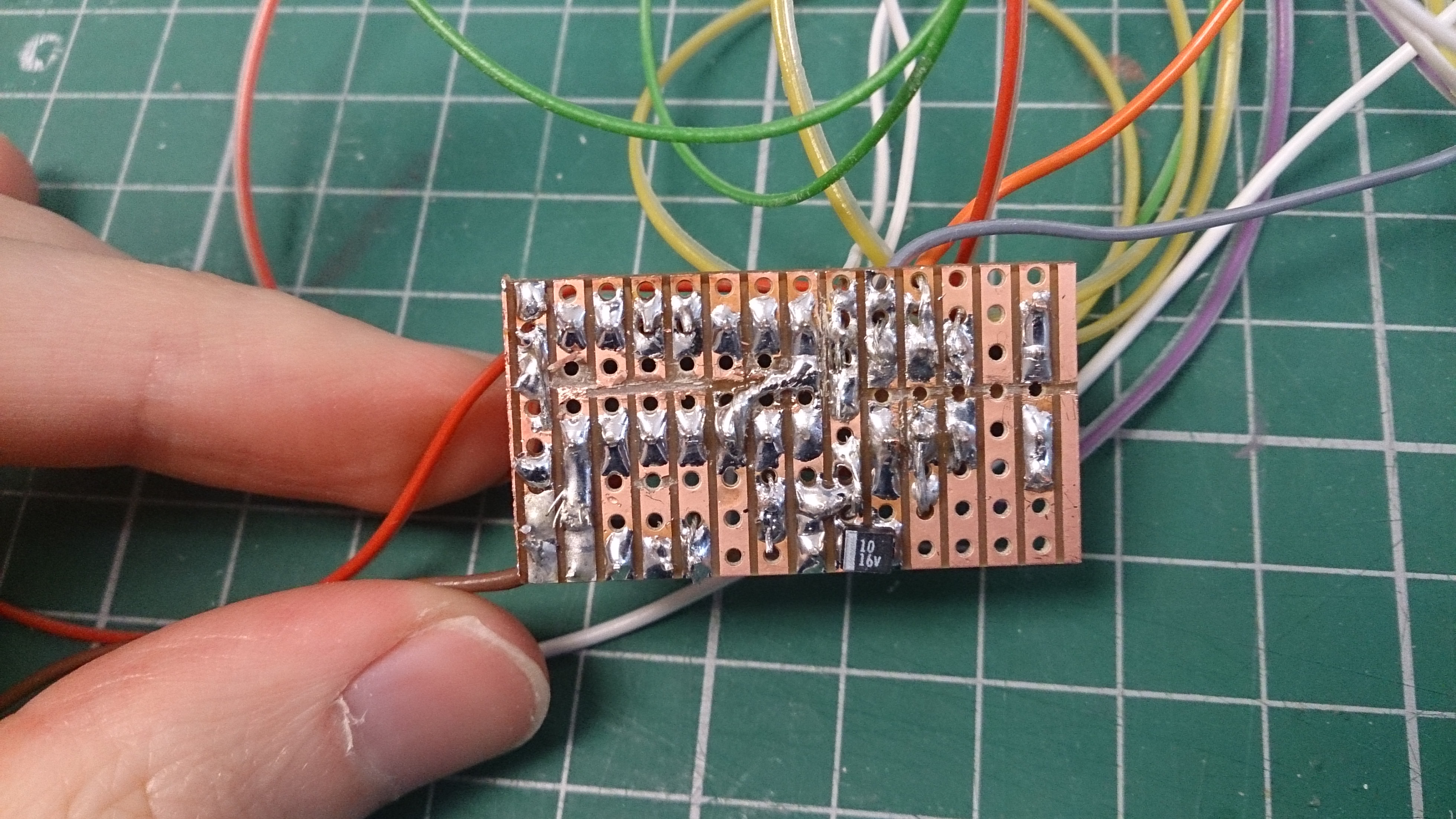 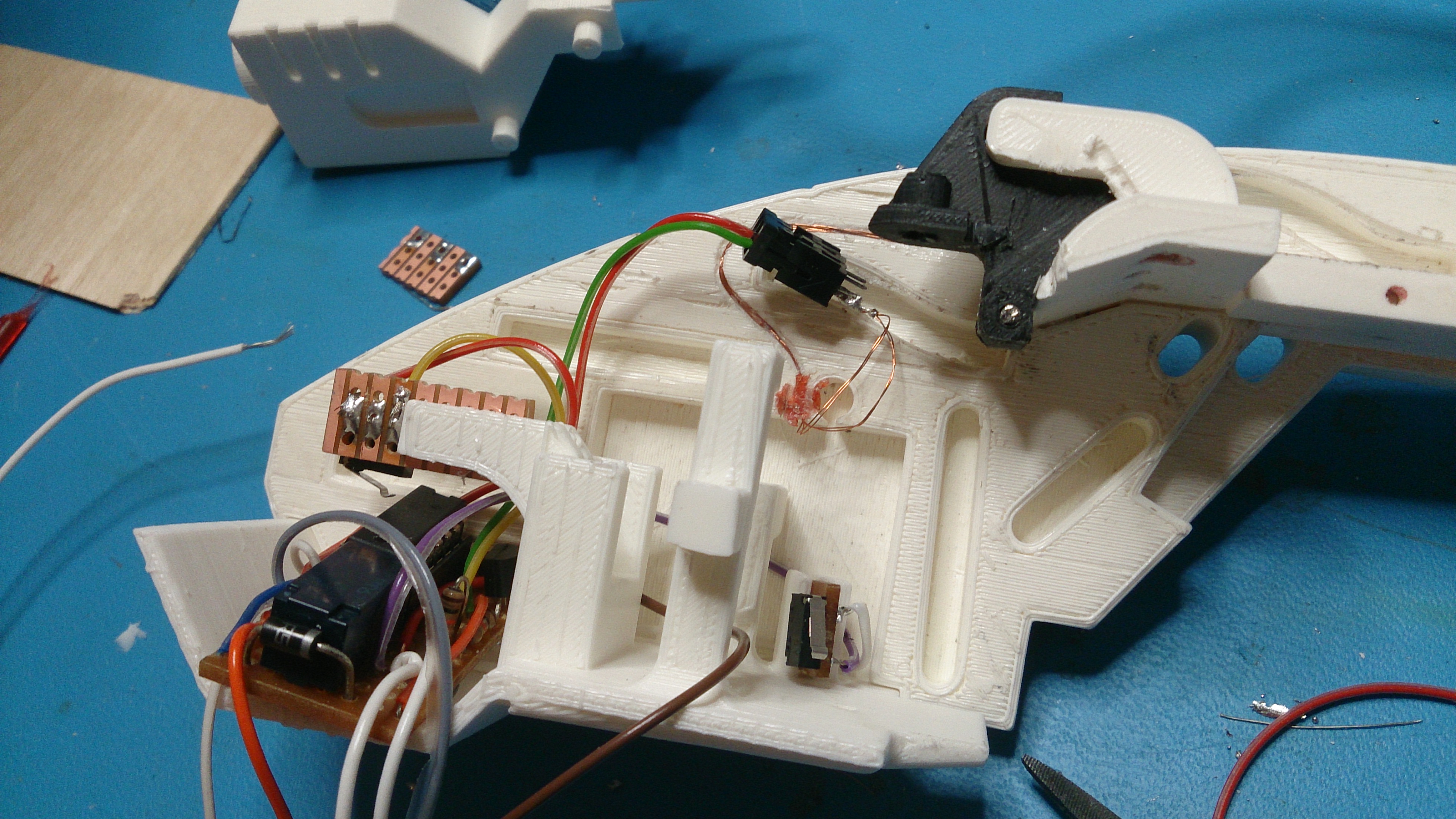 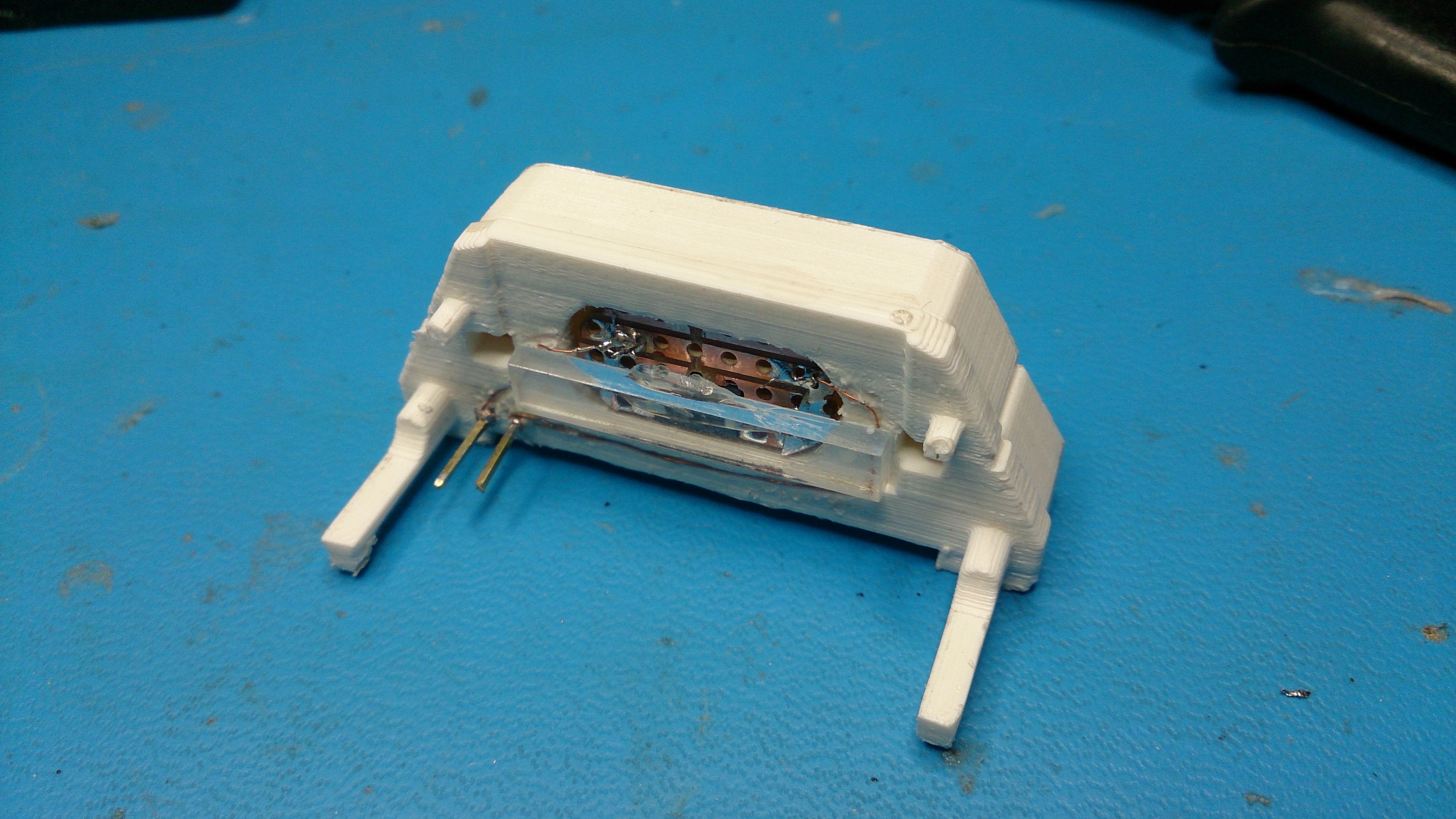 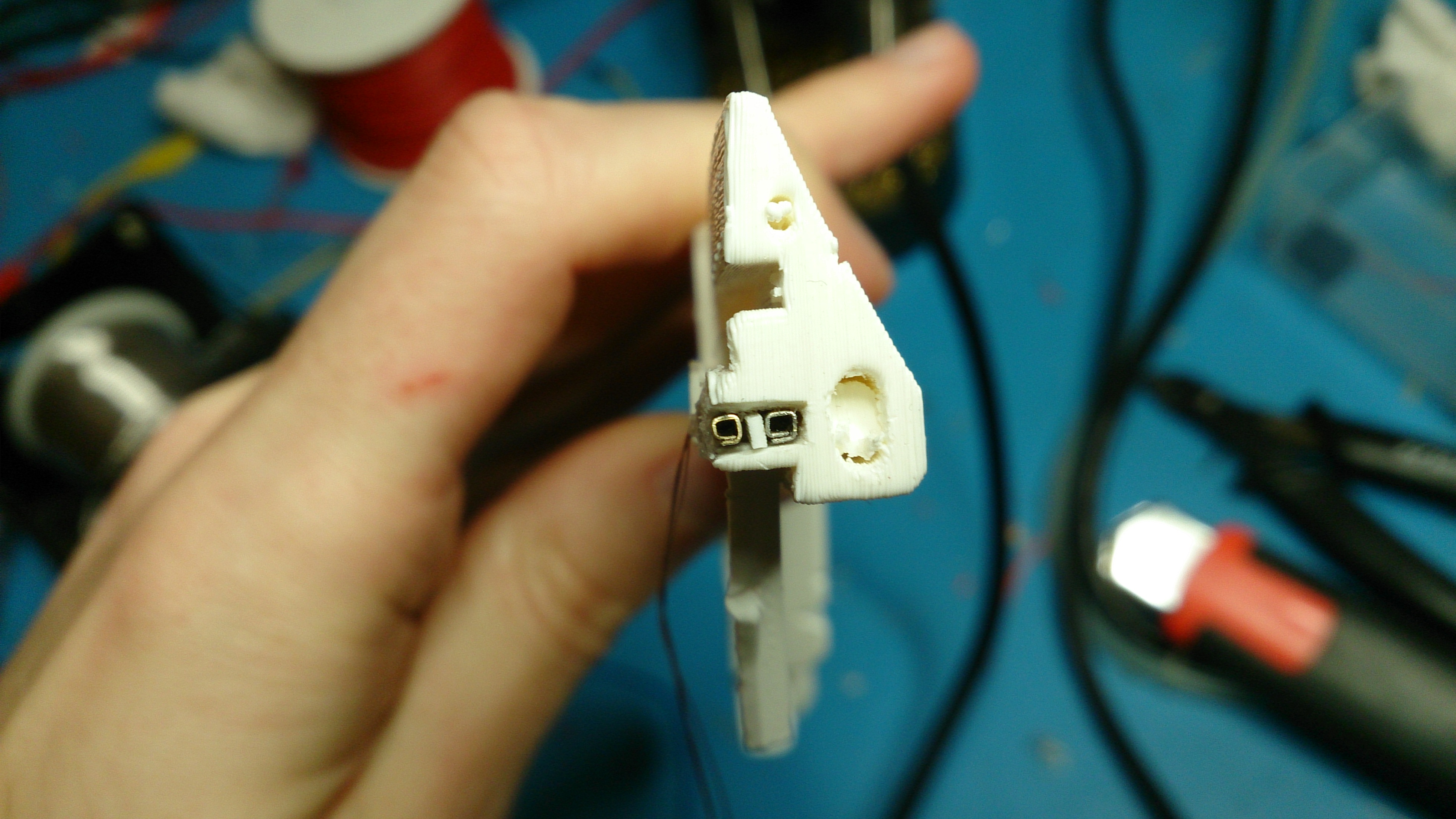 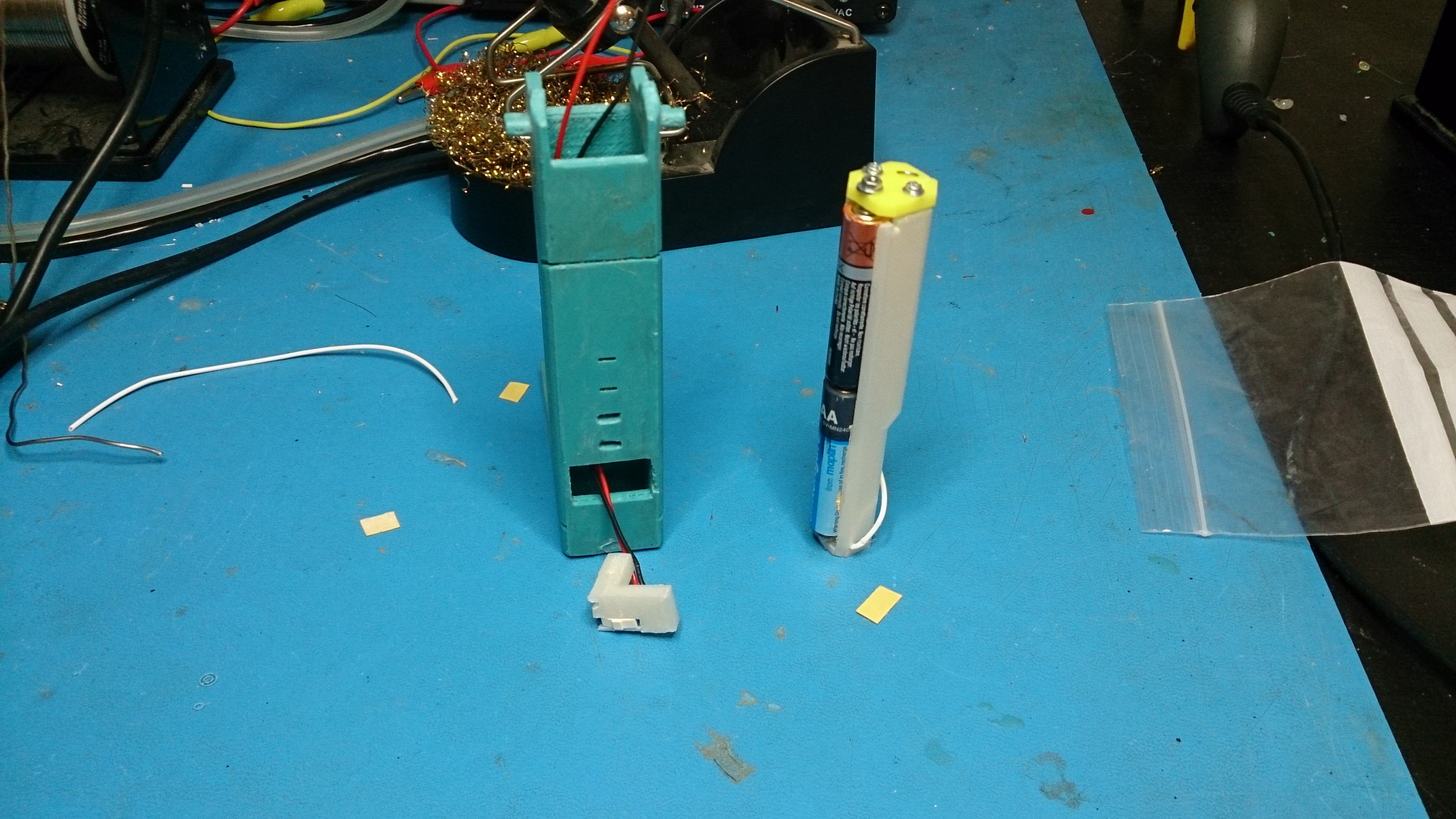 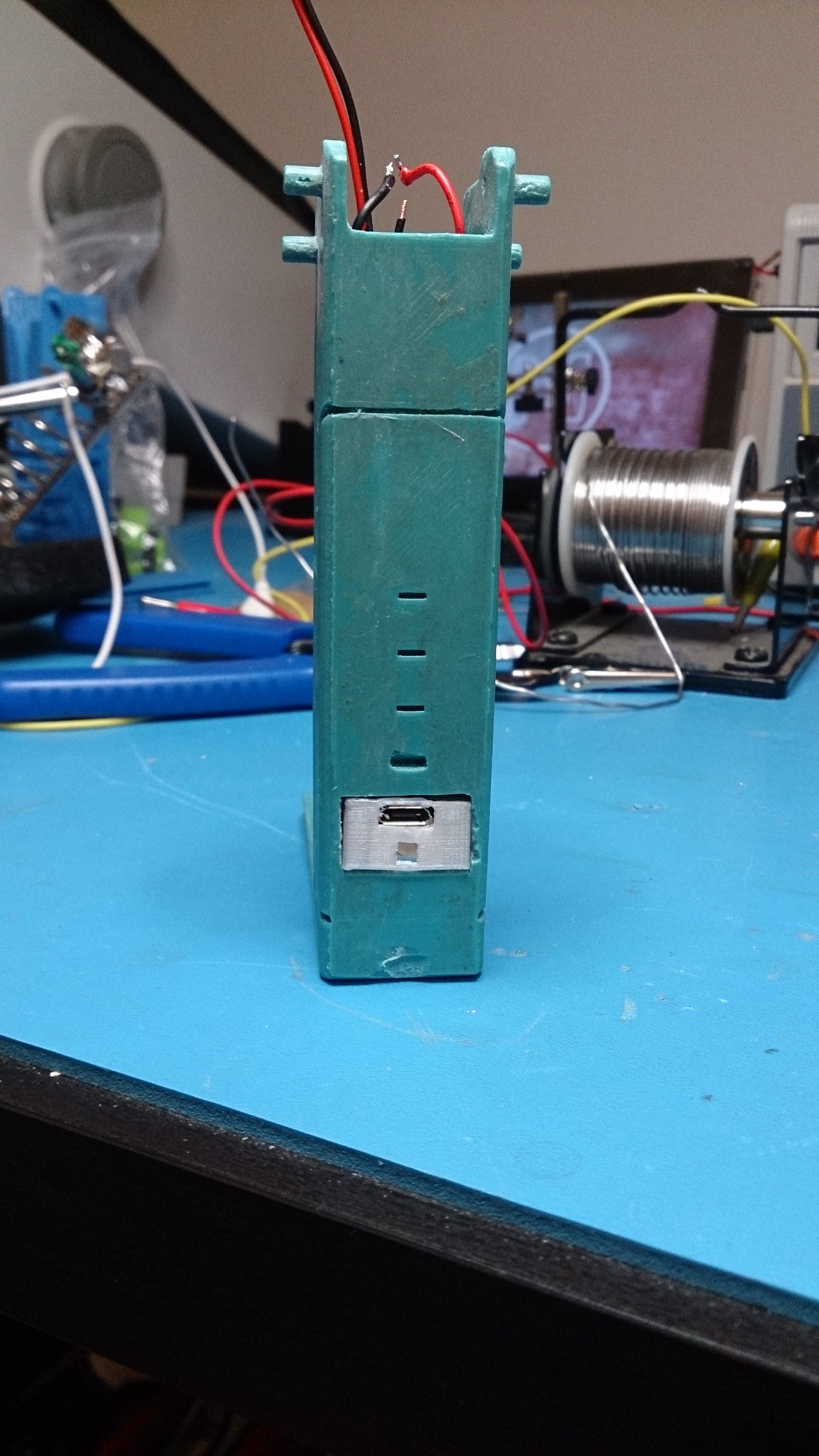 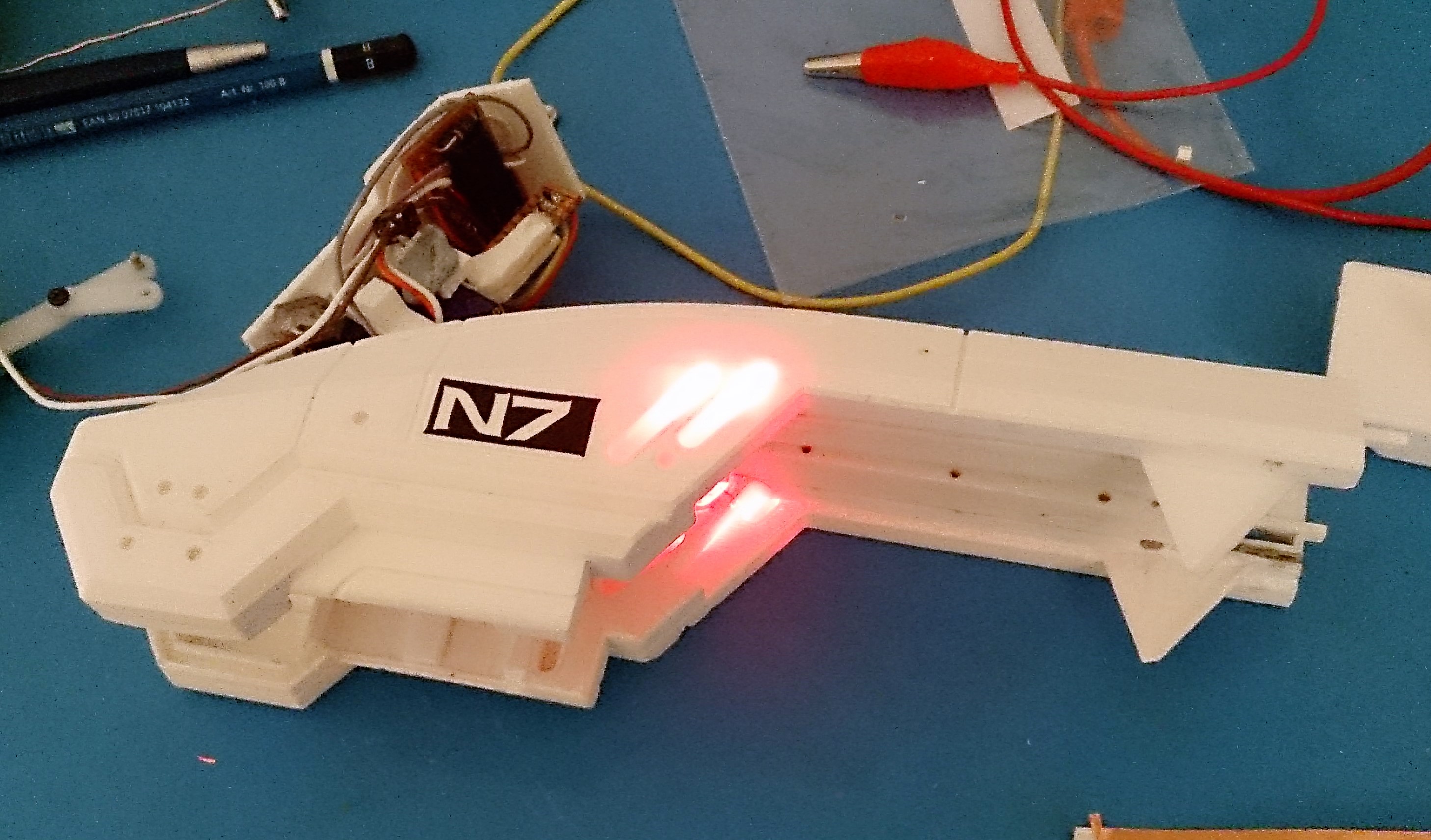 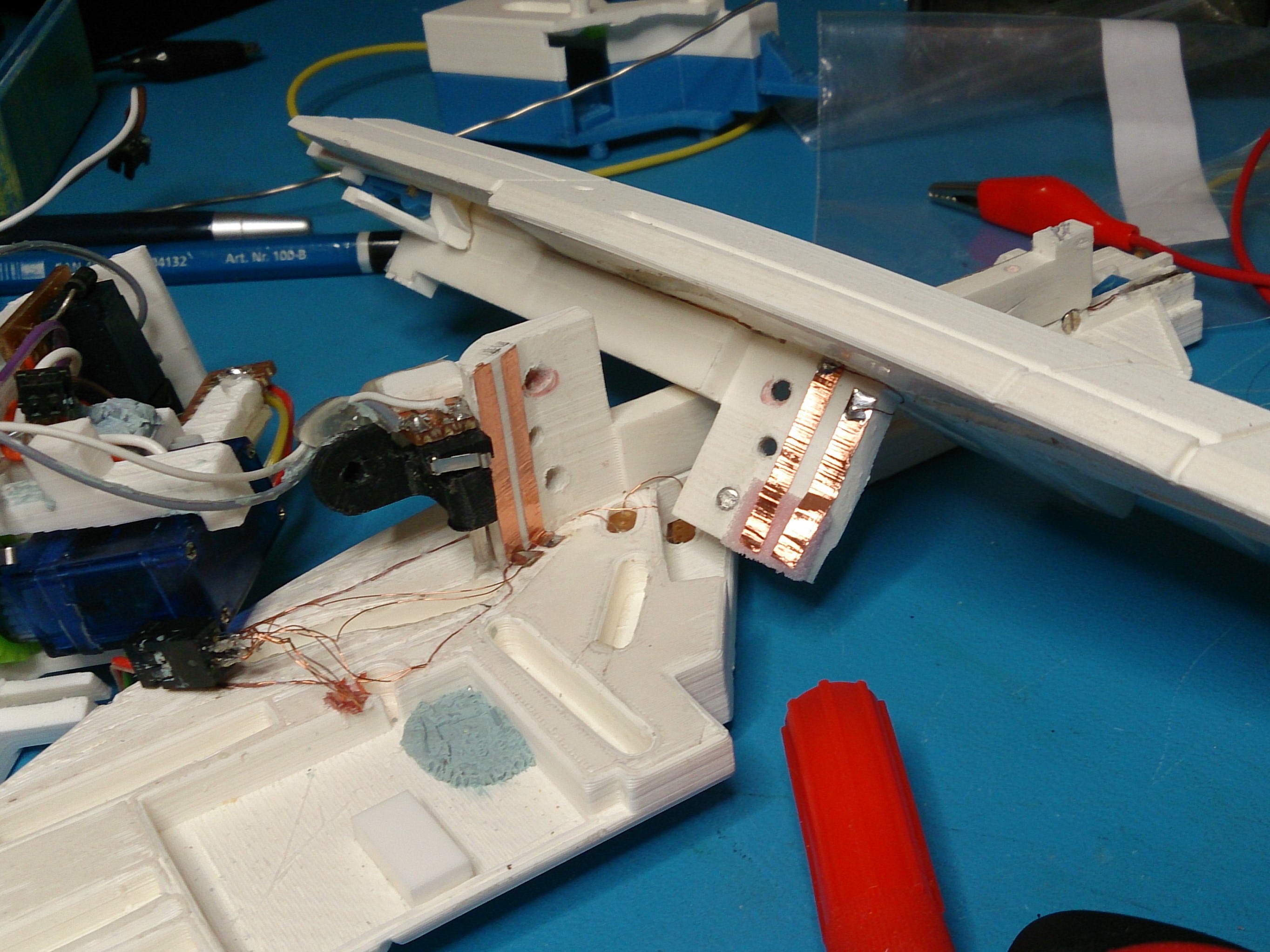 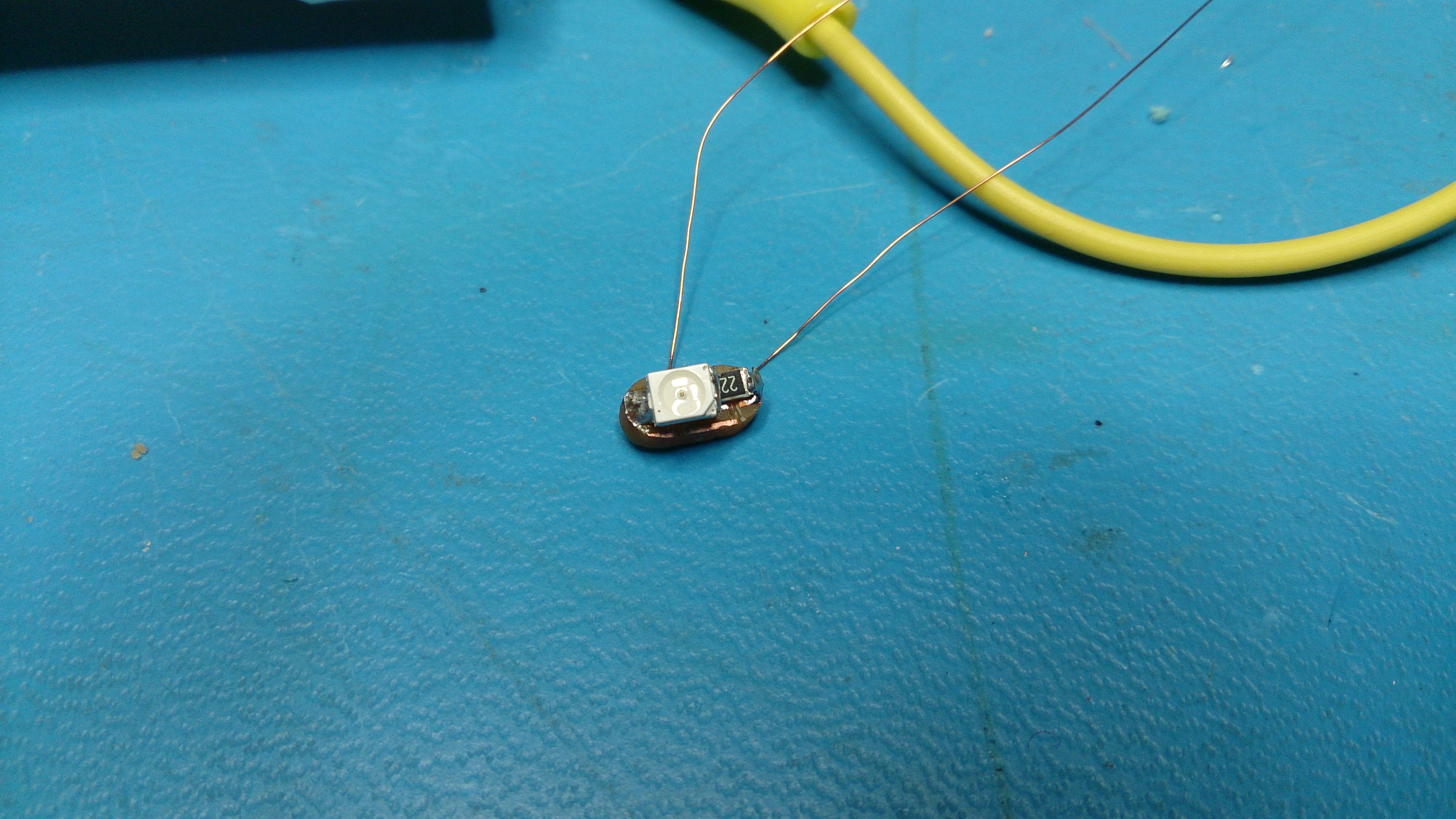 I've had a couple of people ask, this is what it roughly looks like inside when assembled, there have been some changes since this picture so I'll need to take a new one soon.

If you want more updates on this project I keep a facebook page with posts on all the progress I've been making: https://www.facebook.com/optimisticgeometry/
O

It's been slow going but the paint job is starting to come together. Smoothed out the print with spray on car body filler and then primed. I used spray on aluminium paint as the base coat then added a black for the barrel and grip. Next I'm going to use a mask and an airbrush to do the white highlights and lettering then do a bit of weathering. No idea if it still moves, once the painting is finished I'll assemble it and hope for the best. I do not predict great results

Got my lettering and weathering done. Last step is to fit the mechanism in and see if this puppy still runs.

Used vinyl stickers as stencil masks which had mixed results and then weathered with oil and water paints. Touched up the edges with some dry brushed silver. Came out okay I think. Massive thanks to Sorenzo props fo showing me how to do this/painting it half himself.

Just a small update. The painting came out great but once I put the whole thing together the mechanism started jamming. I've been slowly working away at it but I'm not sure what the problem is. I've smoothed out every surface and it still jams.


On a brighter note, with a little help from Sorenzo Props I managed to finish a spring loaded version of the gun which works beautifully. Makes me think the jamming issue is not with the design but with some manufacturing problem.


More than a year in the making and It's finally finished. The damn thing is still a little unreliable and a delicate wall flower but I'm happy with the result. Especially as this was my first ever replica prop. Will try to take some better photos soon but for now these are all I have.

​
It's not quite good enough to start churning out commissions but if you really want one I posted an interest thread in the "project runs section" explaining the situation. http://www.therpf.com/showthread.php?t=276641
Last edited by a moderator: Nov 8, 2018

Very cool!! Pro-Job all the way:cool

Win7ermute said:
You win for coolest thing I've seen today. It's early though
Click to expand...

I made a video showing all the parts and prototypes I went through to make this. So many discarded ideas, some I'd even forgotten about :eek
That's version 208 on the CAD model at the start, and that's just one of about 7-8 parts.

Section 31 Phaser Pistol with all the trimmings