Knives from The Hunger Games

Hey guys, this morning I went to the midnight showing of the hunger games, and LOVED it. I've always been a big fan of the books, and I noticed some weapons I wanted to ID while watching the film. A few weapons I recognized were a Gil Hibben throwing axe, and a japenese-style pole axe thing. A knife that sparked my interest however, was the knife that Katniss used for the majority of the film. At first glance, I thought that it was a cold steel GI tanto, but after further glimpses I saw that it was a sawback and not a tanto, although it had the bulkiness that the Gi tanto retains. Does anybody recognize a knife along these lines, or noticed it while watching the movie themselves? Oh, and Clove also had many knives (most of which were neck knives). Did any other knife-buffs identify any of those while watching the film? I am trying to ID as many of these as possible. Thanks!

Im going to see the movie again today, cause just once isnt good enough Hopefully ill be able to id some more weapons this time..

RPF PREMIUM MEMBER
To many and shown to fast! :lol

All I could indentify was the Hibbenss which I have.

If you look at the Hunger Games Tribune Handbook they have a couple of pics of them. To me they look liked your average generic throwers that you can get in a couple dozen website and countless mail order catalogs.But I may be wrong

Thanks! i saw the movie again, and you seem to be right, at least about clove's knives. But as for katniss's knife, it almost seems to be a bulkier version of the typical- first blood-style survival knife.

I was searching some, and came across this knife: Gil Hibben GenX Pro Thrower Triple Set Large - BUDK which looks similar to clove's main knife, the same knife that rue steals from cato in the training center.

Its been reported that there is a Cold Steel Bowie Bushman in there.

Hooked up as a spear though...

Yes! I remember that one, it is the spear that peeta carried while he was with the careers. That is the one i thought was a japanese-style -pole-axe thing i posted in the first post! thank you!

apollo said:
His first ones early 90's
Click to expand...

could the knife you are talking about possible be one of the knives from this page: Other Production
or Fantasy Series or Gil Hibben knives, collectible knives, throwing knives, hunting knives. ? Or one from teh cover of this: KNIFE THROWING GUIDE - Book by GIL HIBBEN knives 3rd ED | eBay ?

RPF PREMIUM MEMBER
That link one of his original throwers

So does anyone have any ideas for the sawback? I've been looking but all I can remember is the basic shape... a screen shot would be nice, lol.

Hopefully its a $20 BudK special, but with my luck, its not
O

^I was also wondering about the sawback. Looked like a good knife seeing that it was supposedly used to saw through a small tree limb.
B

The main knife looks very similar to a Tom Brown Tracker. Its not a cheap knife at all. Great quality blade, I love mine. Tom Brown Jr. is the country's number one wilderness survival and tracker specialist. He was the basis for Tommy Lee Jones' character in the movie "The Hunted".

bnogare said:
The main knife looks very similar to a Tom Brown Tracker. Its not a cheap knife at all. Great quality blade, I love mine. Tom Brown Jr. is the country's number one wilderness survival and tracker specialist. He was the basis for Tommy Lee Jones' character in the movie "The Hunted".
Click to expand...

I looked at some pictures of the tom brown tracker, and in my opinion, it does not look like the main knife at all. I saw the movie twice, and payed very close attention to the details of the sawback knife, and the contours do not fit at all either. I also thought that it had a crossguard as well.
O

I agree that the tom brown doesnt look like the one from hunger games. Kiddo have you had any luck?

nah, the other day i even looked for like 1 and a half hours. budk, knivesplus, etc....nothin on the sawback

RPF PREMIUM MEMBER
Kiddo, have you seen this shot? Maybe it will help with ID. It's the handle as it was shoved into her backpack: 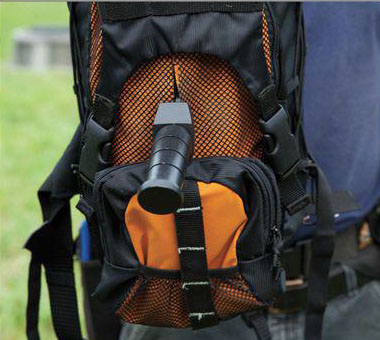