RPF PREMIUM MEMBER
Well thankee, sir! I haven't messed with it in a long time, but it's still one of my favorites.

Here are answers to your questions:
(I have no affiliation w/ anyone who sells this stuff, just telling you where I got my parts from)

Mitchell tone arm: there was a guy on eBay who made these in aluminum for Boba Fett costumes; try using those search terms

metal pulley disk: Elvis Trooper on the web, he used to make aluminum discs, but can't find his site now

If you are using the airsoft as your base, you will also need to get rid of the bull barrel. Here is the correct barrel:
https://www.shapeways.com/product/SR2MLSBVM/bb-sleeve-mkii?optionId=43620599&li=ostatus

Also swap out the rear sight for the correct one:
https://www.shapeways.com/product/5V3LBUKZ7/rear-sight-mkii?optionId=42099082&li=ostatus

Although I had a lot of real or replicated metal parts to start, I opted to go 3D print as I felt they would be more secure as they are lighter and and in some cases, the parts were made to be combined into one piece. It's just a personal choice on this replica for me.

Here are a list of other parts if you choose in different directions: https://www.shapeways.com/shops/csbprops?section=DT-12&s=0

Ok, so after asking questions and reading "some" of this thread ...it's kinda long .... I've started on my greedo blaster .
Having recently purchased a 3d printer ( boooo hisss... yes, I know....) I decided this would be a good experiment with it .
There is a fabulous file on thingiverse of this blaster , so I've printed and half assembled it . I've used a couple of ally parts , just because I had them , but the real thing about the ally parts is how well they match the 3d printed parts ... showing just how good the files really are !!! 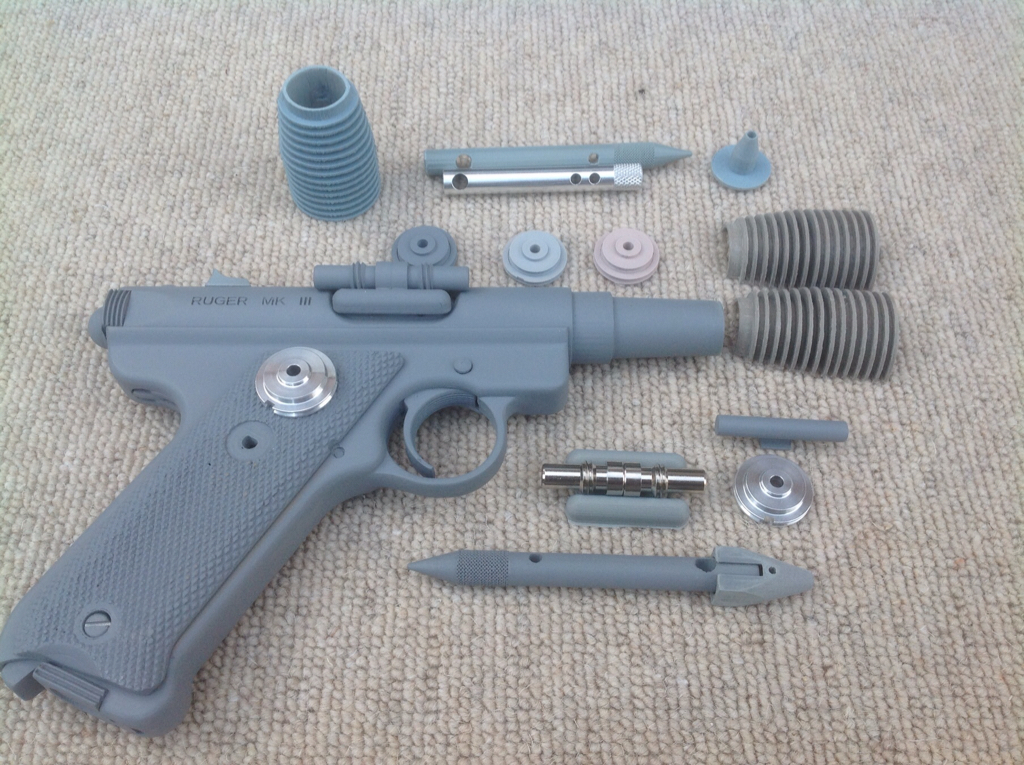 Sent from my iPad using Tapatalk

Just a quick update .
3d file on thingiverse is by "straeker" who has some cool stuff on there , and hyper accurate dimensions.
Ally code discs are from " aluminium falcon " on Facebook , who does tie greeblies in the uk.
The two hole sweeper arm , extra hole for bobba fett , from RS Propmasters ...who need no introduction here .

RPF PREMIUM MEMBER
It's a really nice looking print, but if it's a true replica of the Ruger MK III it'll have an inaccurate safety!

EDIT: Meant to say magazine release, not safety! Sorry about that. 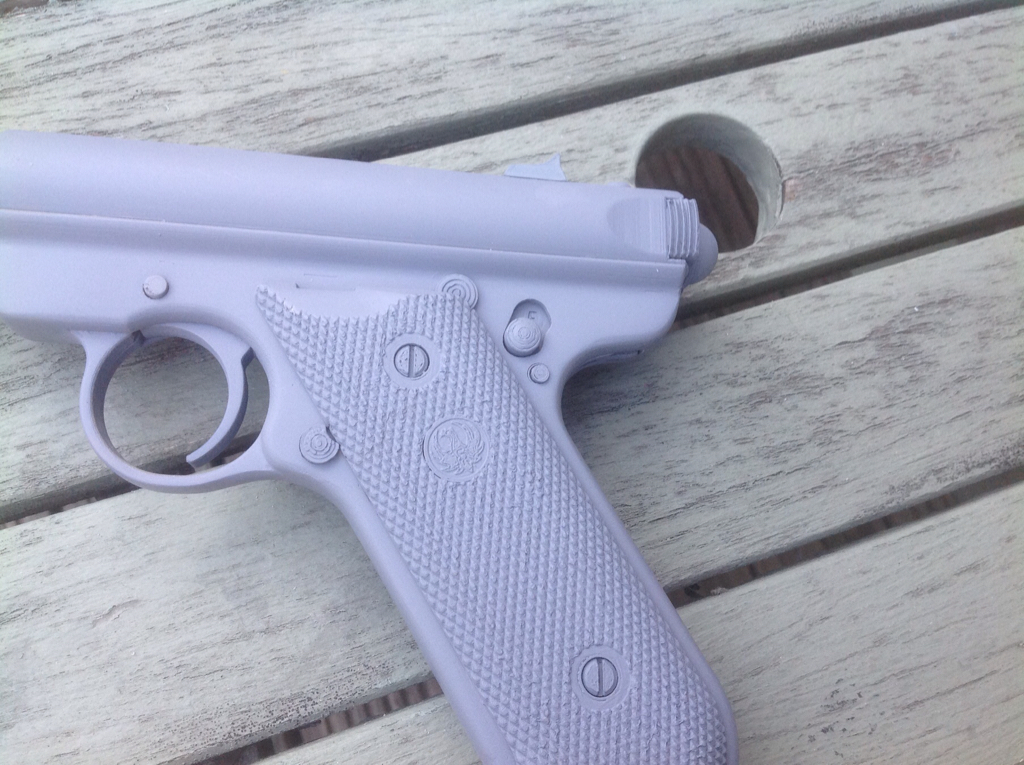 Sent from my iPad using Tapatalk

I was talking to Paul Blake this afternoon ( Paul played greedo in the scenes shot at elstree in the uk )
After filming he took the gun home with him . He describes it as "a decommissioned gun with plastic and ally bits glued on "
He let his kids play with it when they were young , at which time most of the greeblies broke off . Eventually he threw it away .
His later commment was " you could have taken anything ..no one wanted the stuff back then at the end of filming "

So...there must have been two ( at least) greedo blasters, a real deactivated one with greeblies from the uk shooting , and a resin cast one for the pick up shots in California ( white high heels ones ) the one with the thick plastic looking finger guard .

The magazine release on the MK III is inaccurate. I don't know why I said safety. Dyslexia, probably.

The magazine release on the MK III is inaccurate. I don't know why I said safety. Dyslexia, probably.

Sent from my VS996 using Tapatalk
Click to expand...

you are right,
The original propdoesnt seem to have had either magazine or magazine release tab... I left them on because they were there I suppose.

So I’m gathering parts for my first blaster build and thought I’d put a question out there:
Will original Ruger MK1 or MK2 grips fit on the KJW airsoft? 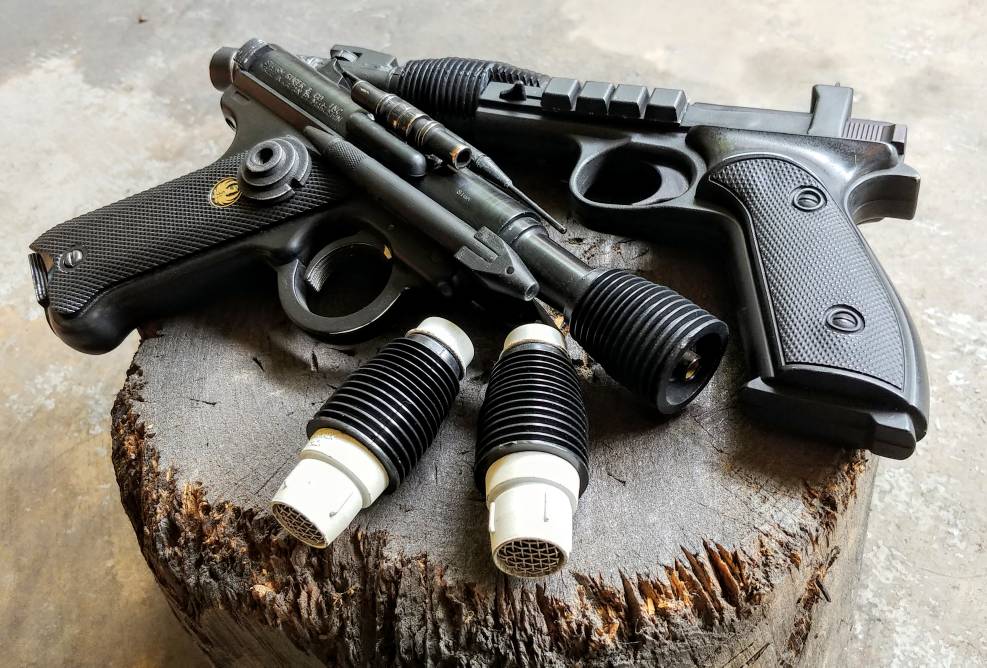 What did you did you do to the trigger guard? It's a very nice idealized detail to the original prop. It's the only thing I wish I had on mine.

sbeall said:
So I’m gathering parts for my first blaster build and thought I’d put a question out there:
Will original Ruger MK1 or MK2 grips fit on the KJW airsoft?
Click to expand...

I don't believe so, no. But I can check, since I've got a real mkII as well as the airsoft, although my airsoft isn't a KJW. Mine is a Marushin.

I believe the problem is there are different inner workings and parts underneath the grips on both the real steel and the airsoft. I wanna say I tried to put real grips on the airsoft once before, and wasn't gonna be able to do it without major modifications.

MJF, it was years ago that I thickened that trigger guard, but I think I used a couple strips of .060" sheet styrene, heated with a heat gun so they'd conform to the shape of the trigger guard. Then CA glue, then Bondo. Then paint, of course.

Anything like that should work, like Apoxie Sculpt or JB Weld putty. I've been meaning to revisit that trigger guard and make it a bit more accurate. I'll get to it, eventually. I'll have to look at reference again, but I believe some material should be added on the inside of the guard, probably more so than the outside.

Very similar to the SE-14R, the putty or whatever was used to thicken the trigger guard on that blaster was added solely on the INSIDE of the guard, as far as I can tell.

I wish we had better reference of the Greedo gun, it's been several years, and nothing better has turned up. I feel like we're still missing some detail that'd reveal itself with better pictures!
Last edited: Feb 17, 2019

I have a question about the correct orientation of the tips of the side parts (those stereo pieces). It looks like it should be like the way Dann has them but when you look at the pictures of the prop, the outward side of that pice does not have the cutout. It looks to be flat with a screw hole to the front. If you turn it to the flat non cut out side, it looks too narrow and the hole is not in the right place. Am I missing something or are we looking for a different version of this part?

RPF PREMIUM MEMBER
I've seen pics with them in both positions, so it's really up to you, I reckon.

What I've done is position one horizontally, and the other vertically. Asymmetry, and the best of both worlds!

Thanks for the reply Dann. That is disappointing, but not necessarily a deal-breaker. If the genuine grip profile is close enough to the shape and size of the KJW frame, I’m not above some internal surgery to help them fit.
This may seem like a lot of work just to get a Ruger logo on the sides, but the blaster would look so much better with it. Not to mention the added flair of having at least some part of a real gun on there.
-Seth