Hello, new member to the site just wanted to say this site and its resources have been a great help to me. I am primarily a star wars autograph collector. However I have been moving into other behind the scenes material like original signed Original Trilogy Contracts and movie props. I am not sure if this is the appropriate forum for this and if not i can delete and move this thread. Just wanted to show off some of my collection to people who might be interested.

These first two props I got from Charlie Bailey who did work on ESB and ROTJ. The first one are screen used hard guards from ROTJ for a storm trooper. They show some scratching and a some minor smudging/discoloration on the inside tape but otherwise are in great shape. 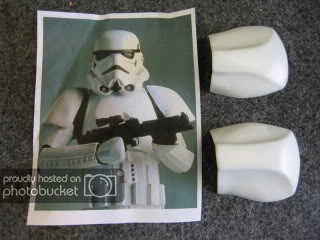 here is a shot of the reverse 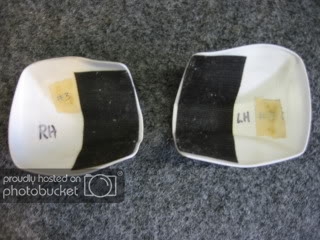 Mr. Bailey was just awesome to deal with and he wrote me a nice COA on ILM stationary. He has a new company forming actually and we talked about that as well.

The other thing i got from him were blaster parts from a ROTJ stormtrooper rifle. I had no idea how much of those guns were just makeshift parts made and attached to old actual non firing guns. The scope shows some scratching and actually wasn't made of metal like i assumed, just some sort of poly/wood material that's been painted over. 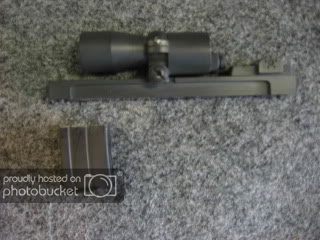 This next piece i acquired from someone who worked close to the ILM/Kerner (sp) locations where ROTJ effects were shot. its a 6 inch by 6 inch square of Death Star from ROTJ. Now this one didnt have the provenance of the other two BUT it was signed by

and lastly, oddly, Anthony Daniels who played c-3po. Now, one thing i DO know well is star wars original trilogy autographs. And all of the autographs were perfect matches/authentic. PLUS i knew Lorne Peterson would not knowingly sign a fake prop as if it were real (as others told me) so that went for it. Finally i was able to match up this square with another previously sold/authenticated HUGE chunk of ROTJ death star. Green light for me i pulled the trigger. Have been happy ever since. No major condition issues, but i noticed there are a lot of little pits/holes at corners and in depressions in this piece of Foam/resin. Also, it looks like it is painted which surprised me. 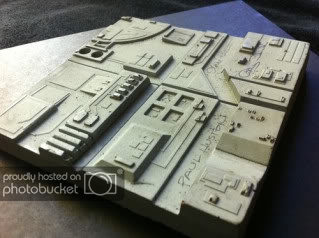 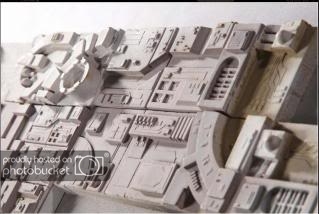 Lastly, now this isn't really a prop, but its pretty cool non the less. IT is the preliminary approval contact for Mark Hamill to appear in "star wars II" as it was called back in the late 70's. It is from the law firm that handled most of the legal contract work for ANH and ESB and has been countersigned by many ILM / Lucasfilm heads at the time. Most of the autographs are printed because all that mattered was that Mark Hamill signed and authorized it (to confirm terms and dates excetera). It is 7 pages long and is in great condition. what i loved also, being an autograph guy, was that the autograph of hamill was a PERFECT authentic vintage graph. Guy who sold it had a TON of contracts from this and other companies he acquired through lot auctions in the late 90s. 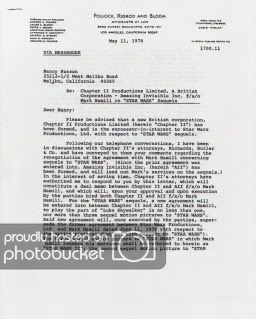 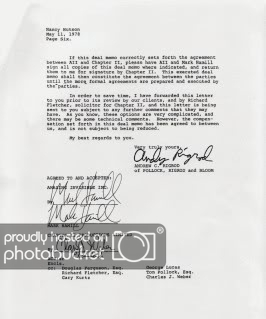 anyway, i really don't have much expertise on these fields so i dont know how much i will contribute going forward. I only buy really what I can authenticate myself like autographs, or right from the original makers/builders. And star wars stuff is expensive LOL so it might be a while before i acquire more. But i was pretty pleased with this stuff and thought i would share. Thanks for reading

Have say some very nice pieces... you certainly came to the right place to talk star wars props. I particularly like the 'preliminary approval contact " not a prop but very interesting piece.

Ty very much, what I'm really a big fan of are all the links i keep finding. like this entire new world of collecting I had no idea others were as into it as I was. I mostly post on Rebelscum since that's the biggest forum for autograph star wars collectors that's public, but next to nothing is on their for original props. I love the links in peoples posts, shows me where i should be looking next.

Love the hand guards! Great stuff :thumbsup and welcome aboard!

Thank you guys! I'm working now on getting a few more Star Wars:ESB props and armor at the moment. My issue is my lack of expertise. I have to either buy directly from ILM, or from someone who has some other sorta iron clad provenance like the signatures that i can authenticate, or I am SOL. would love to have the expertise i've been reading/seeing on this board on process and material. I just keep thinking " i can spend 1000 dollars on licensed replicas, or i can spend a little more and get the real thing (or smaller parts of it). I just would rather have the real thing, you know? Is armor as hard as it looks to get? I haven't been able to find anyone else with screen worn armor when going over the posts. I have this goofy notion of building a mix/match set (or pure) from any OT movie but it looks like storm trooper armor just isn't around, and the helmets are like 30k if you find them, this sound right?

Thanks! I take it from the lack of responses its sorta gonna be a fools errand to try and buy more authentic screen used Storm Trooper armor with any sort of authenticity like I was talking about earlier. Is it just that hard to find real star wars props/armor like that? I looked up what helmets sold for and I knew that made sense. BUT i thought i could still land some armor. Sounding like "that's a negative, Ghostrider".

Community Staff
Re: Great Site! Didnt know there was such a resource (photos of my collection)

It is very hard to find and often very expensive.
Z

Thanks for the info guys, more digging i do the more through this site and other prop sites, I think its obvious i might be done acquired SW props baring miracle finds. What i can find is so insanely expensive. 4 figures not 3 lol. I got lucky a few times i guess. Looks like baring miracles it wont be continuing.
A

That Mark Hamill contract is a wicked piece! That's something that could quite easily be a collection centrepiece
Z

TY aussie. Yeah, after decades (literally lol) of collecting, it just popped up on EBAY of all places for an INSANE low price. My hands were shaking when i bought it lol. It showed up, and it was the real deal, i was shocked.
R

Thats such a good find, Honestly I'd never have thought to even search for contracts or anything... I may start now though.
Z

Hi. Really been enjoying the site. Dont post often because honestly im still so new to all of this. I recently had another Star wars production piece i acquired. While strictly speaking its not a prop, it is pretty cool non the less. Its the final approval contact page forming a link between"the star wars corporation" and Lucasfilm to Create what became ANH. Basically, we agree that this company exists and has the rights to make star wars, and we partner with them (oh and by the way, its the same guy who owns both LOL). Just one of the documents that needed to get created to create Star Wars. Its got the most complete vintage Lucas autograph ive ever seen too (been doing this a while, its as good as it gets). Props are hard to come by when real, same for contracts and production artwork. Hoping to build a nice collection of all 3. heres a pic.

Ty guys. I am working on getting some authentic storyboards and a large piece of screen shown ship model. After that Ill have a piece of every type of prop other then costume. Then, its learn more and start getting upgrades lol.


zhamlau said:
Ty guys. I am working on getting some authentic storyboards and a large piece of screen shown ship model. After that Ill have a piece of every type of prop other then costume. Then, its learn more and start getting upgrades lol.
Click to expand...

Er, you can't mention "large piece of screen shown ship model" and not tell us what it is. What ya gettin?
M

You're in these parts now too James? Nice pieces. I'm discovering this is a slippery slope, the whole prop deal. It's VERY expensive, and provenance and authenticity is even more tricky than the autograph hobby.

This is my first post----been a lurker for a while. I've picked up a couple of pieces, but not having any inside access or friends in the biz, I just can't swing acquiring some of the awesome pieces people here have.