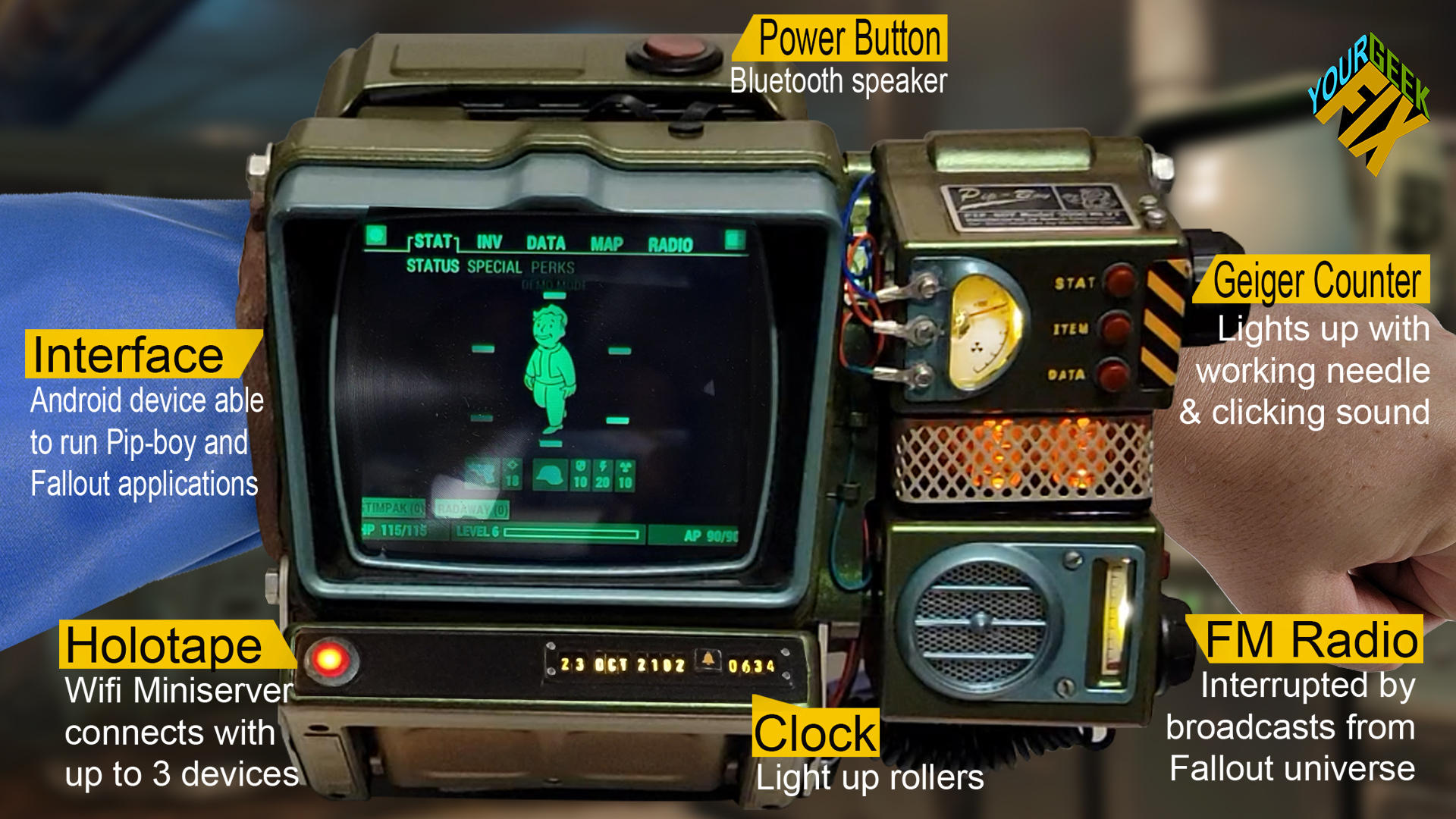 After two years, meeting and collaborating with the designer Chris Barnardo of the Wand Company and former lead artist, Nate Purkeypile of Bethesda, not to mention a lot of experimenting and breaking things, I now have a fully functioning Pip-boy 2000. You might ask, "Can it lift heavy items and stop time?"... Well, yeah... In the Fallout universe! Like its predecessor, this device can control Fallout 4. So, in effect, we made a device that controls another universe! It also has a working visual interface, light up clock rollers and button, working FM radio with flickering radio tubes, Bluetooth speaker, and a Geiger counter that lights up, clicks, and has a needle with organic movement. Even better, I found a way to make a holotape that has its own power, memory, and wifi, that can be wirelessly accessed from the device. Using Bluetooth biometric devices, I can even take my temperature and heart rate.

Why? I ordered my kit back in 2019. It was made by the Wand Company, after a number of hurdles and problems with the game nearly resulted in it not being made. I also saw the video by TESTED where Norman Chan interviewed Chris Barnardo at E3. They showed the working modules that were to be released, including a radio and Geiger counter. There was also a screen, but it was only a backlit sticker. I was hoping to have a fully working screen, like the 3000 version. Chris said they wanted to release a working screen that interacted with the game, but screens these days were not the right size and shape for that large square screen, and making a fully functional screen would cost so much, "Fans would not be able to afford it." Also, it was said by several people, "There was not enough room behind the screen to make that area an independent device. I took this as a challenge! I was determined to find a way to make that area a device with a square screen of that size, independently powered, that could not only play fallout and the holotape games, but also play video, music, make calls, play Fallout Shelter. At this time I was planning on being able to purchase the radio and the Geiger counter. This is where it began.

I did document this build and the two year journey on Youtube, but I plan to go into more step to step instruction here and answer questions if you have them. But if you are impatient, you can jump to the video.

This is the Blackberry Passport! I wish finding the device was more exciting, but using the dimensions of the model screen, I began looking for any android or Apple device that had a screen that could fit. I was looking for Android and Apple because I wanted to use the existing app and also planned to use other apps from these operating systems. There are a number of devices that are really odd and obscure with square screens, but not of that size. The Blackberry Passport had a great screen, but I was unsure about the area where the keyboard and USB were.

Now, before I tell you how I did it, I will warn you not to modify cell phones as they will not only void warranties, but could cause fire! Also, install apps and set up the phone before dismantling it. After the phone was discontinued and the servers taken down, you have to use a hack to keep it from reminding you to complete setup.

1. First, I removed the upper plastic backing covering the SD card.
2. Then, I unscrewed the top mounts to remove the rest of the backing.
3. under the keyboard is a plastic cover that can be pulled off to reveal the keyboard screws. At that point the speakers will come off.
4. unclip the keyboard ribbon from the keyboard, and remove the keyboard. !!You officially have no keyboard. pair a wireless keyboard before this step!!
5. There is a metal bezel that was at the bottom of the phone that you will also need to cut off or remove carefully as to not harm the board. You may want to keep the plastic covering for the USB for later.
6. Cover headers and other possible areas of concern with Kapton tape. I also kept my plastic backing from the phone and modified it to fit on the board area, with an open area exposing the ribbon connector for the screen. 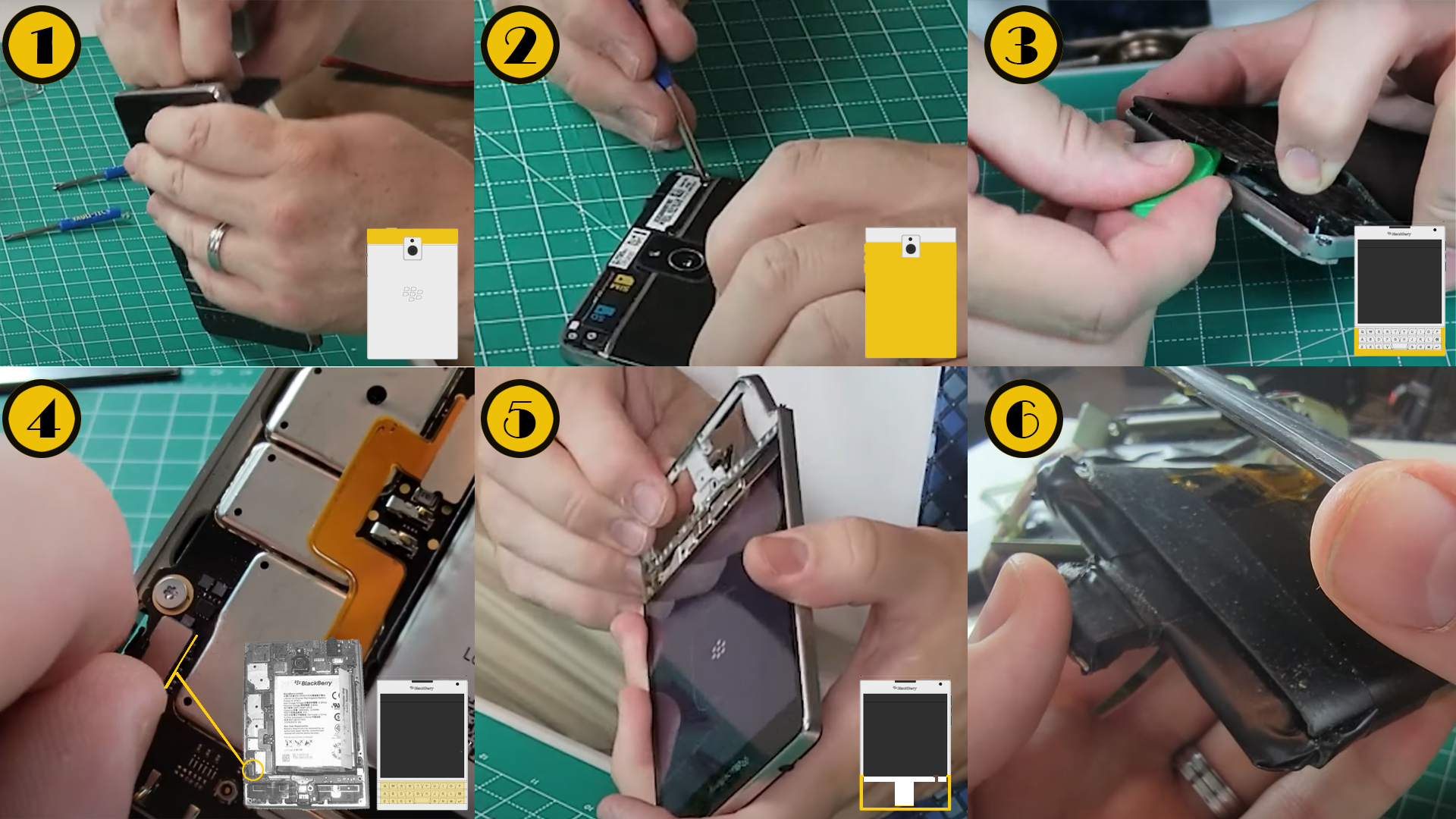 7. I unclipped the screen and attached a new one to the back of the phone (If you bought a screen with backing, you will need to remove the backing first to give the ribbon more flexibility and length). These screens are cheep and this is the easiest way to make the phone work in the correct orientation. Before you ask about forcing screen rotation and other things, trust me this was the best way to make the phone work, put the assistant and power buttons in the right locations and have all apps work. Most of all, this is the only way to make the screen fit in the window area of the Pip-boy.
8. I cut a plastic magnifying sheet to fit the Pipboy window and taped it to my new screen. This will give it the appearance of a CRT and fill any gaps. The flat side should be facing the screen to maintain touch screen capability. You may also but another thin piece of plastic on top if you want a smoother look.
9. Having said what I did in step 7, the black screen area still does not sit flush. I added foam and pushed the screen back slightly to fit against the phone better.
10. I also used a heat gun on the back plate of the Pipboy to flatten it more, and cut off side pieces that got in the way of the phone and the board. You may also need to use the keat gun on areas of the pipboy you need to meld into a better shape for your board.
11. I cut slits in the cuff to slide the USB area of the board through. Make sure you first strengthen and protect that area with plastic from the bezel and electric tape.
12. You will notice the power button is on the right and can be seen through a gap on the Pipboy. You can attach tubing to the back of the middle sliding piece of the Pip-boy that the wires go though that can push the power button each time the right side of the Pip-boy is pressed. The benefit of these modules sliding on the bar is that they can slide when kept just loose enough. You will know it is too tight if the power keeps trying to turn off or on. 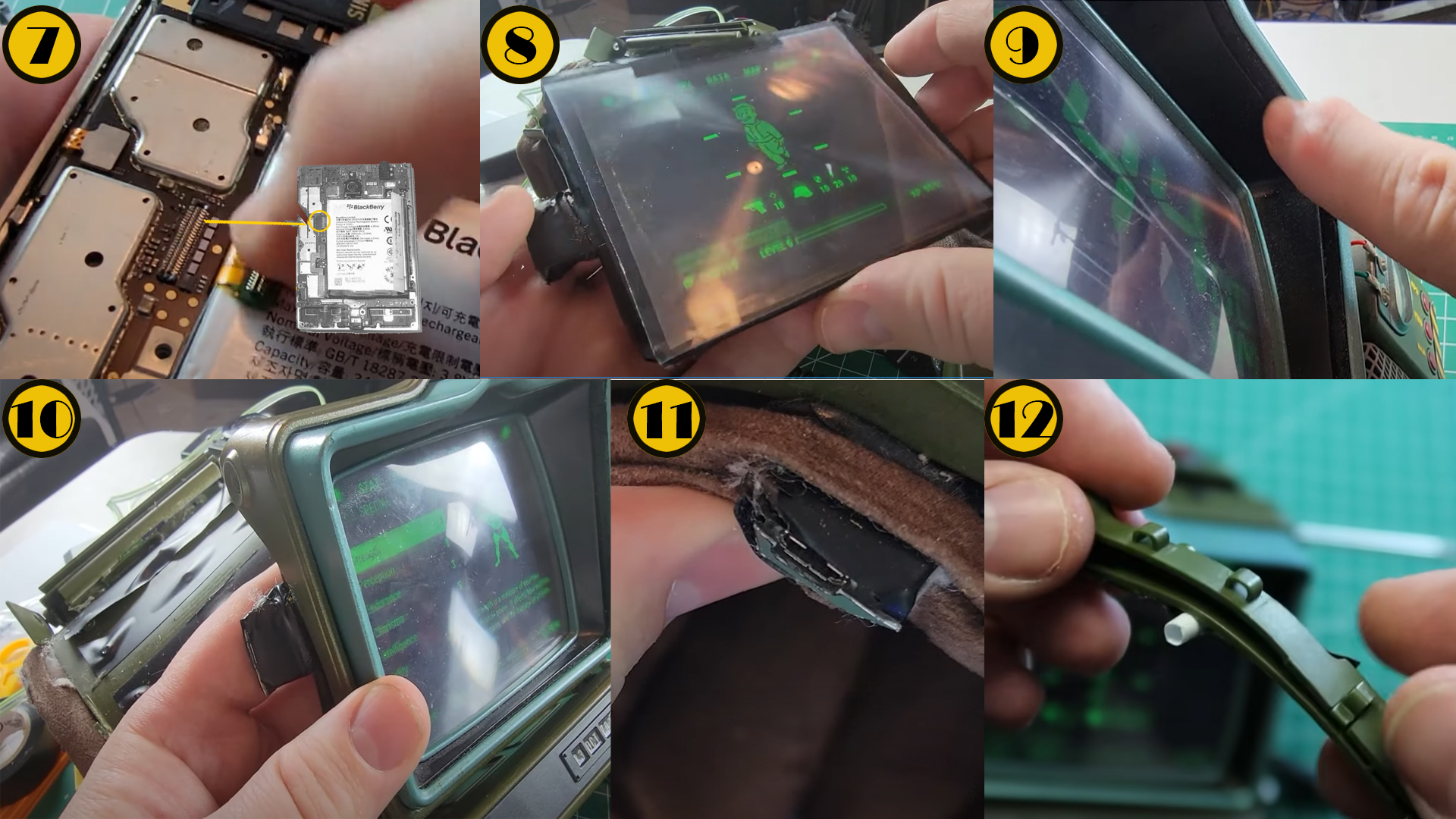 13. This step is optional. I wanted to use the Blackberry assistant and added a button on top to press the assistant button on the phone. Now that most features of the assistant are disabled and this button cannot be remapped, it may not be something you are interested in. I like that it allows me to open apps using my voice.

The only problem at this point is that you no longer have a speaker. Next, time I will post how to put a powered wireless speaker in the top, allowing me to still install the radio module.

RPF PREMIUM MEMBER
It has been interesting to watch your progress on this over the years. Using the side of a "side" vue meter was a clever solution. It seems like you could have used my hall effect sensor idea with a bit of programming, but it looks like you tried to use all off-the-shelf parts. I would have probably built (and finished my design) had I built it using lots of spliced together modules like I used to do when PC modding. (Instead of the 100% custom design)

Also, the trick to getting that "geiger counter" sound is to just pop the speaker with as short and full power of a pulse as possible. If you look at the schematics of actual geiger counters they often just wire the output of the amplifier directly to the battery and speaker. The click you hear is the actual pulse triggered by the radiation passing through the tube. The pulse is very short. At first in my design I was trying to play recorded audio, but I found that just sending a few milliseconds long pulse into the speaker with random timing generated the most accurate feeling sound.
Last edited: May 31, 2022

Thanks. The tricky part was the parameters I put on myself. 1. I wanted it to be modular (e.g., each module work independently), like the Wand Company modules. 2. I wanted to make something simple and accessible enough ANY ONE could build it. It frustrates me when people still comment they are afraid to attempt it. I had three versions of the Geiger counter, the one in the video, the first attempt with separate meters, and one I designed a board for and paid to have printed with a ROBCO logo. That one was small enough, had a demo mode and Geiger Mueller tube, but was quite costly and I came to feel the uselessness of that meter without carrying around radiation was silly. It worked with EMF as well. It was like the magnetic sensor attempt with the knob. Something about the batteries and radio and phone, that eventually make it less effective. Any rate. I will share more of my other versions here maybe. I think I am less likely to be solicited here. While the new Fallout is suppose to have android app control, I don't know the newer app would work on the 10 OS. Blackberry 10.