I'm collecting parts needed for this build, but thought I would begin by showing the Kalimar REFLEX viewer and its removal, to help anyone who is working on this build.

EDIT: This viewer, shown being unscrewed from the Kalimar Reflex is NOT the one I ended up using. I was lucky enough to find a complete Kalimar Six-Sixty with the correct viewer which slides in and out of its retaining clip.


A few angles of the REFLEX viewer: 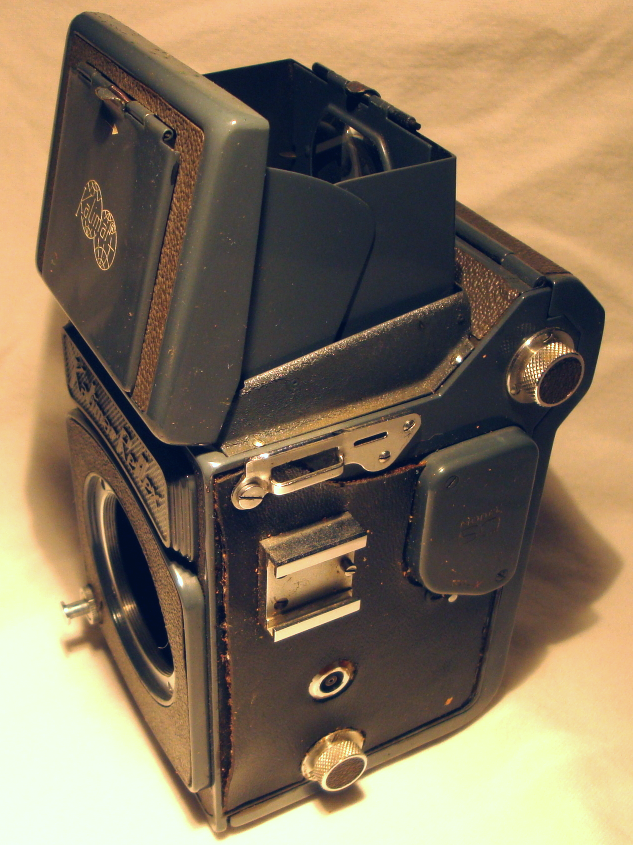 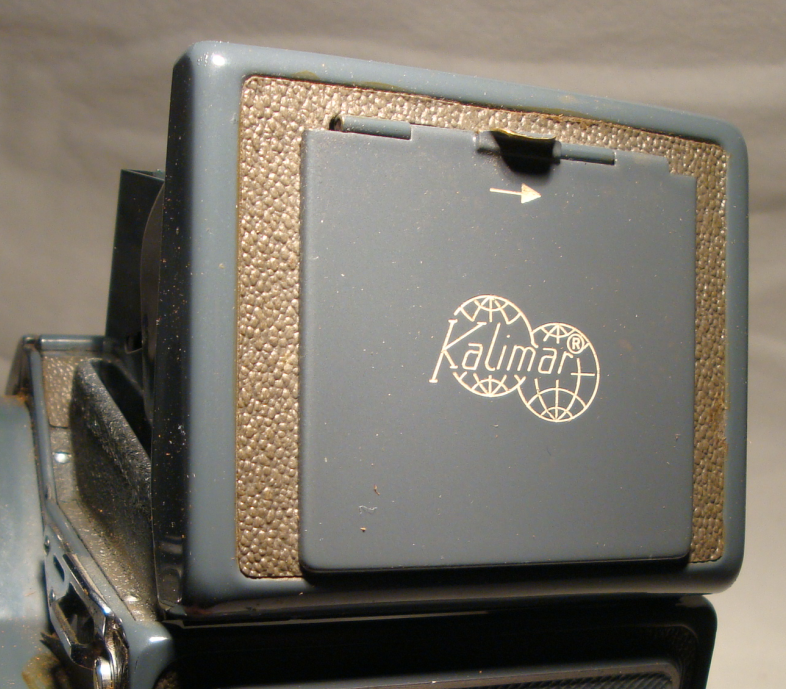 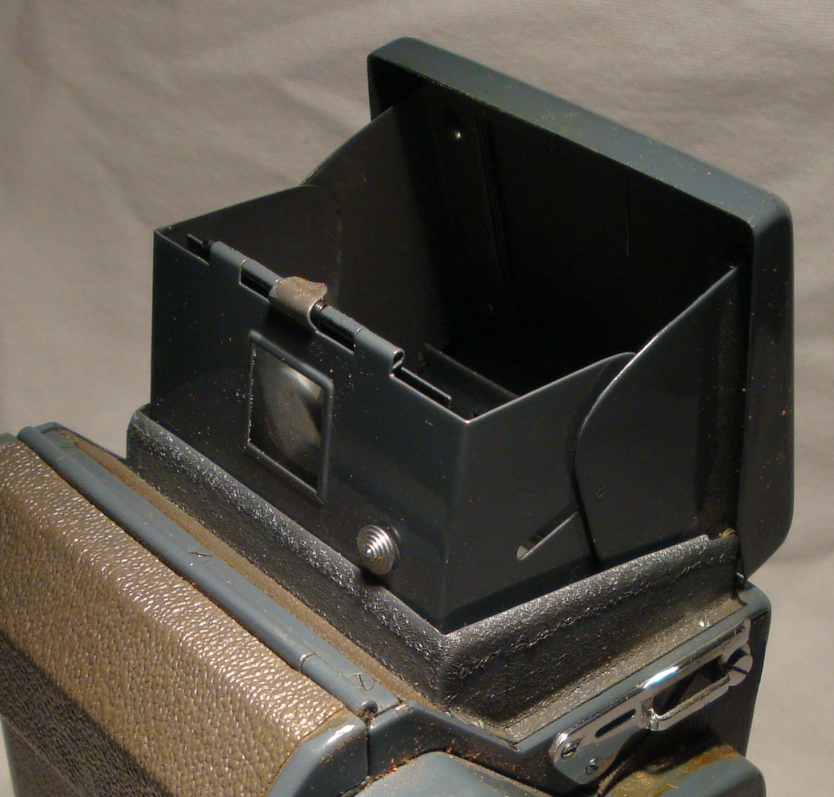 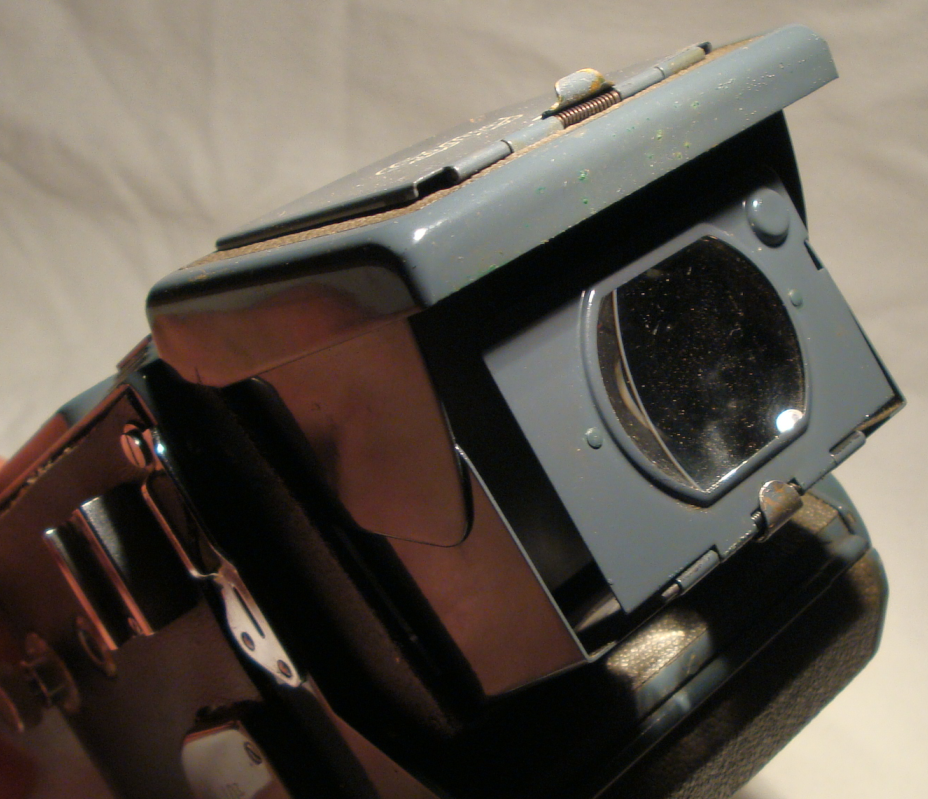 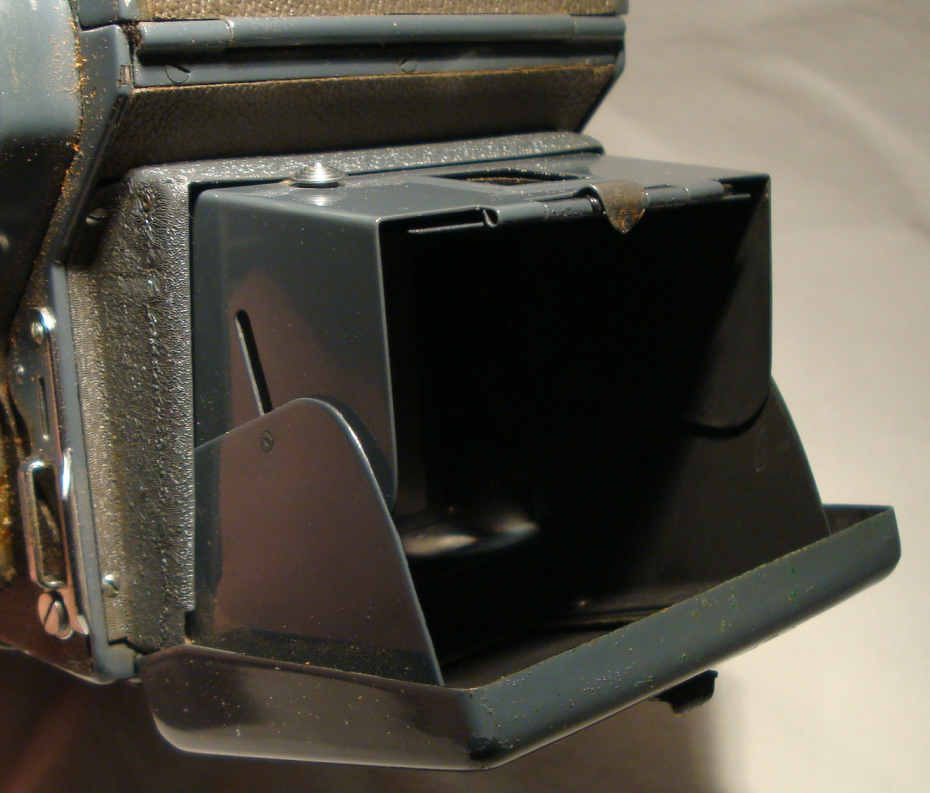 And now, the removal: 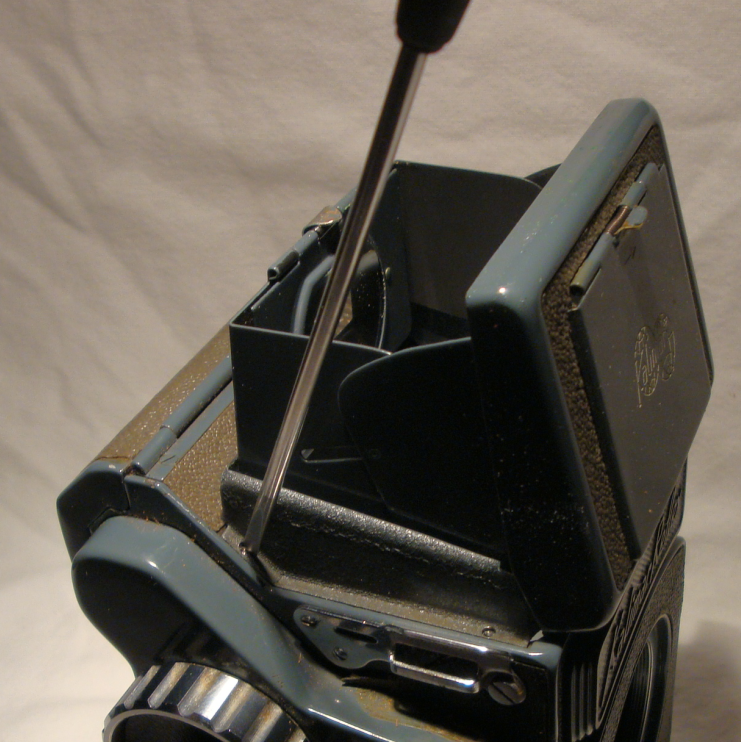 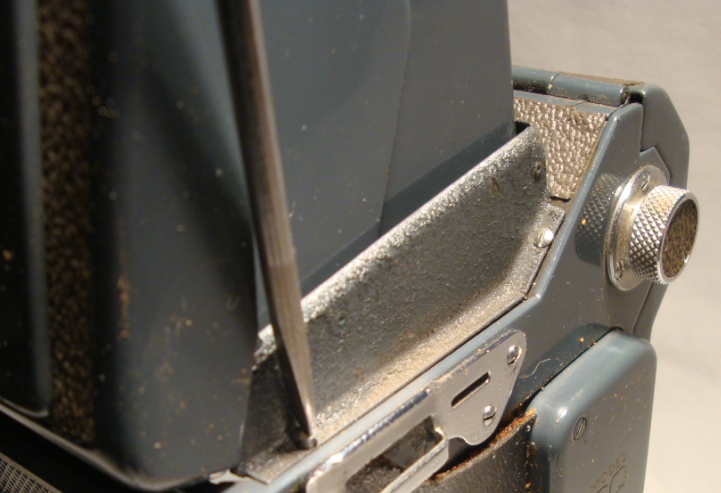 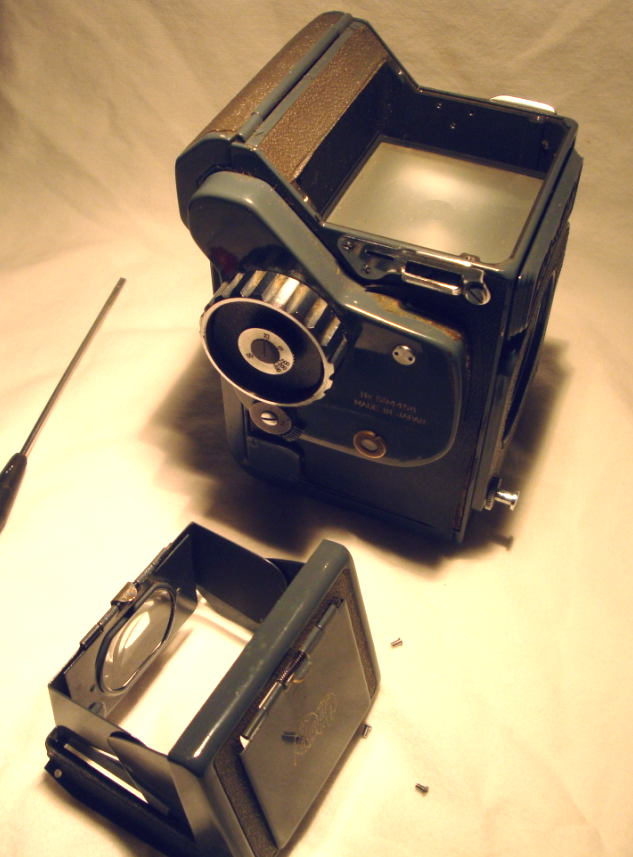 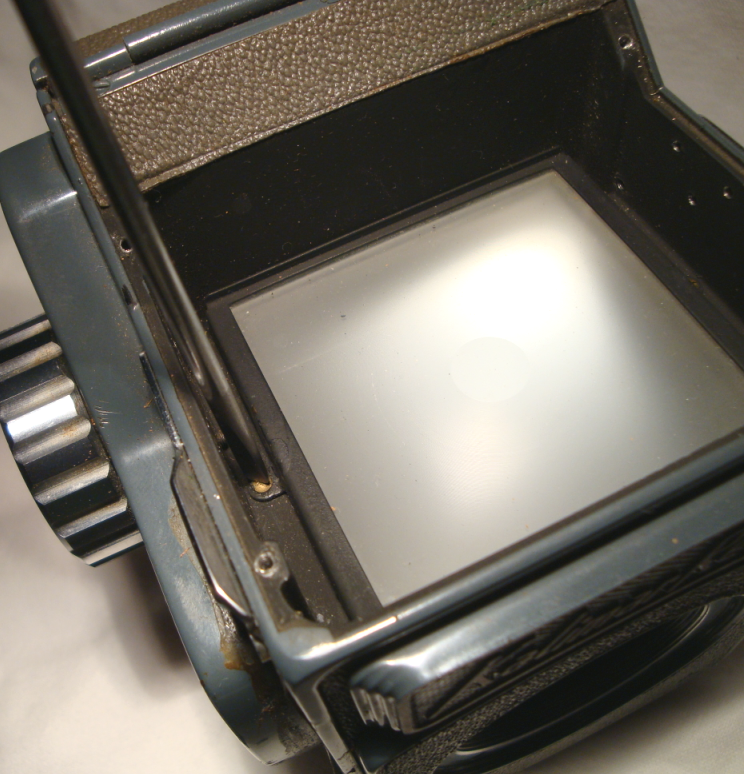 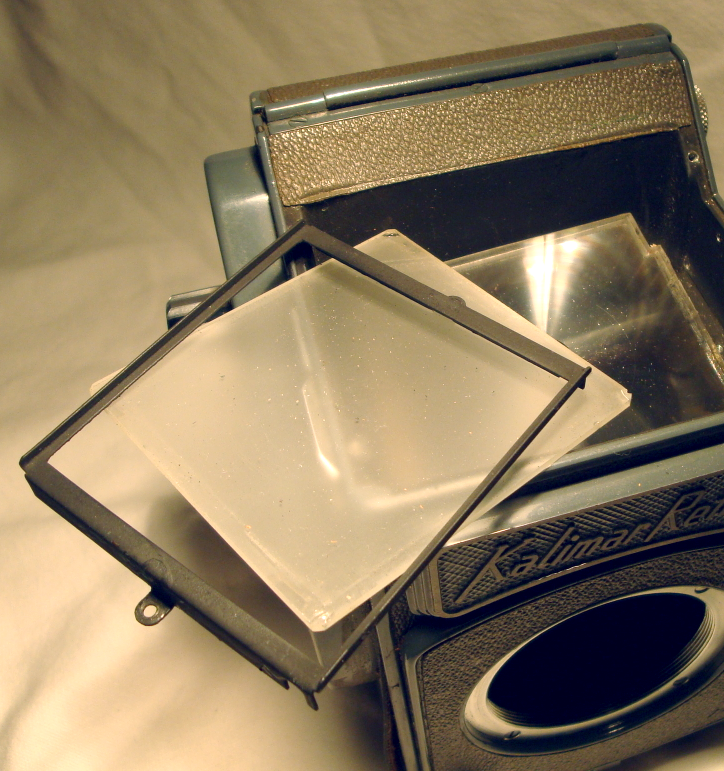 Also, removing the front plate to get the lens ring out (after scraping the vinyl off): 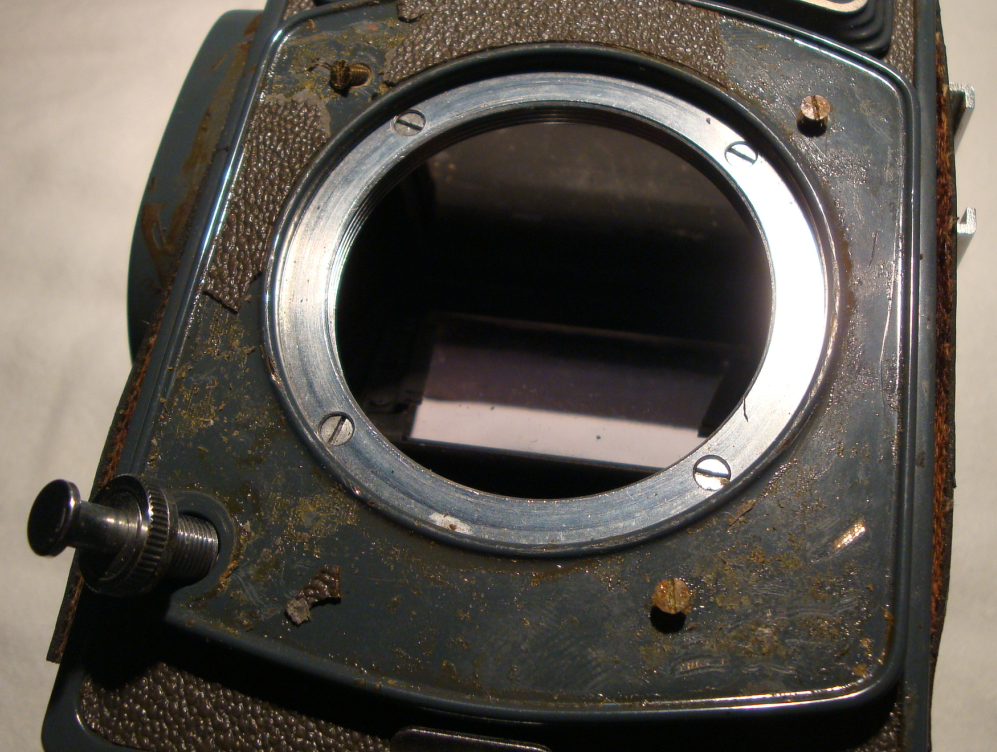 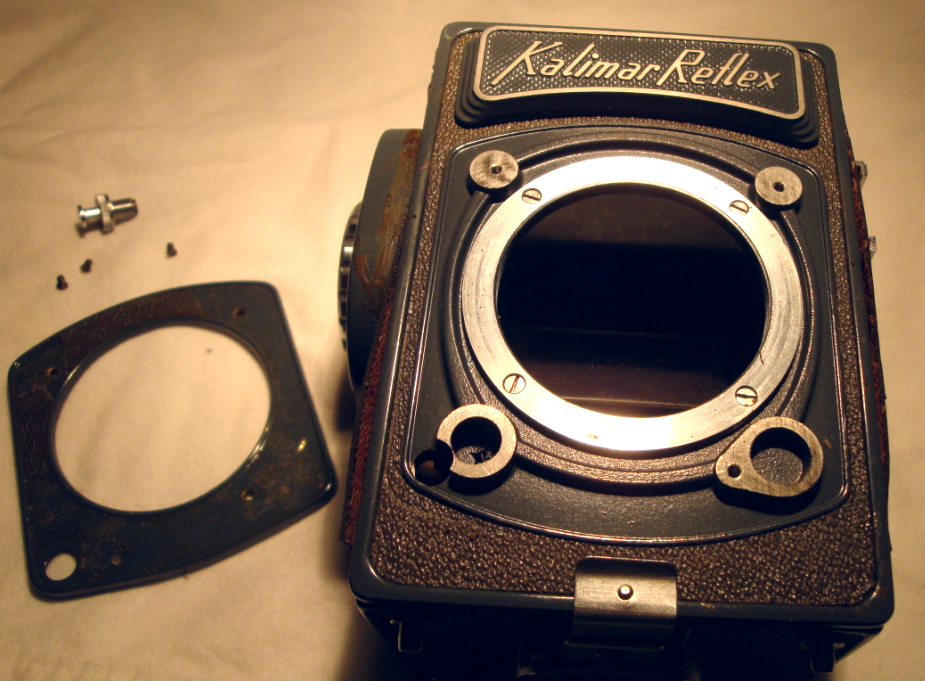 Here are a few pics of my Eumig. I'll post up pics of its tear-down/prep when I do that:

Here's the Bell and Howell, and how to get the knob off: 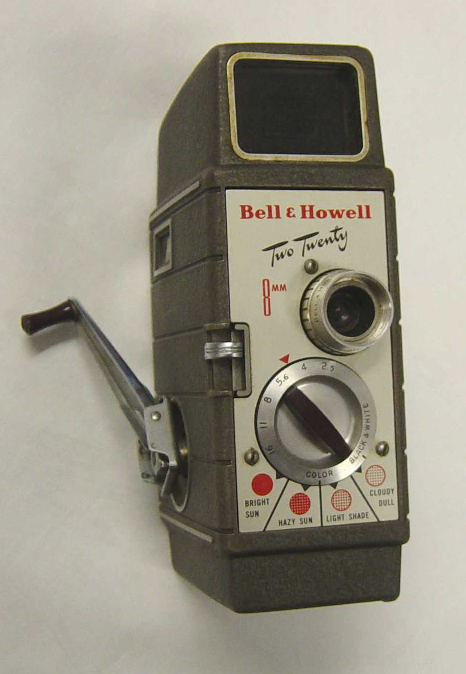 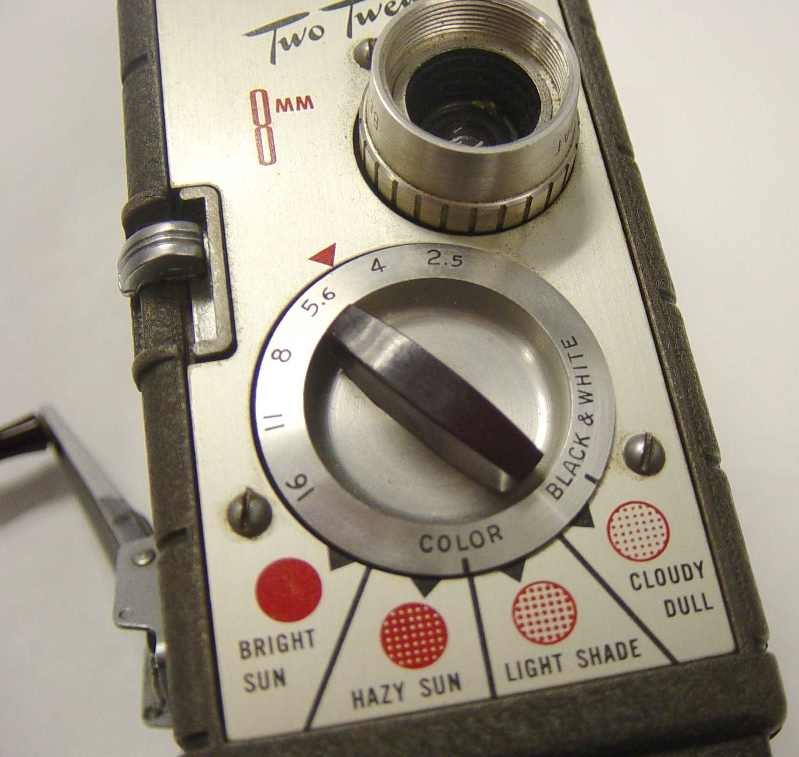 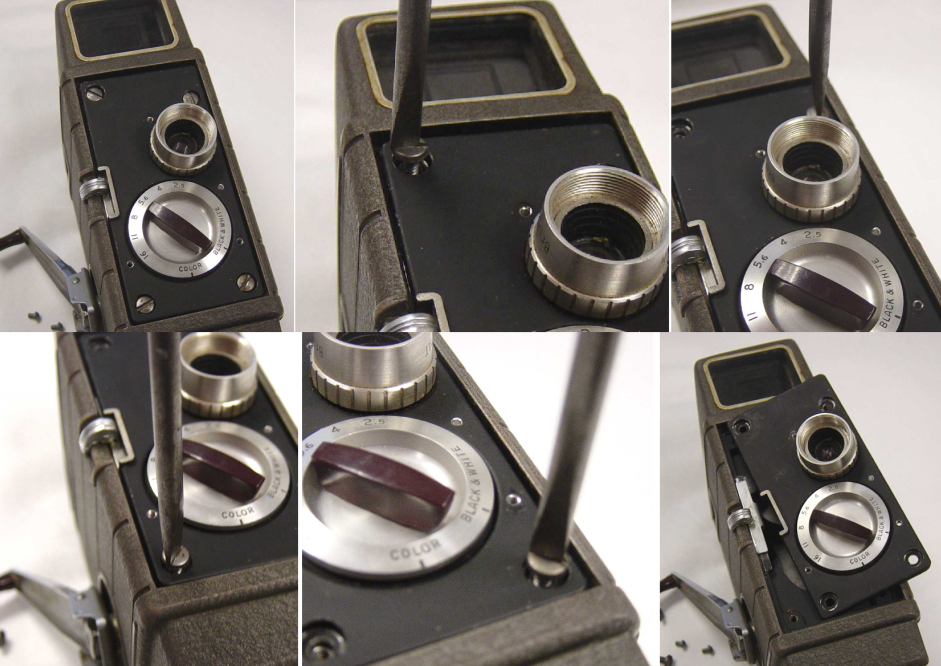 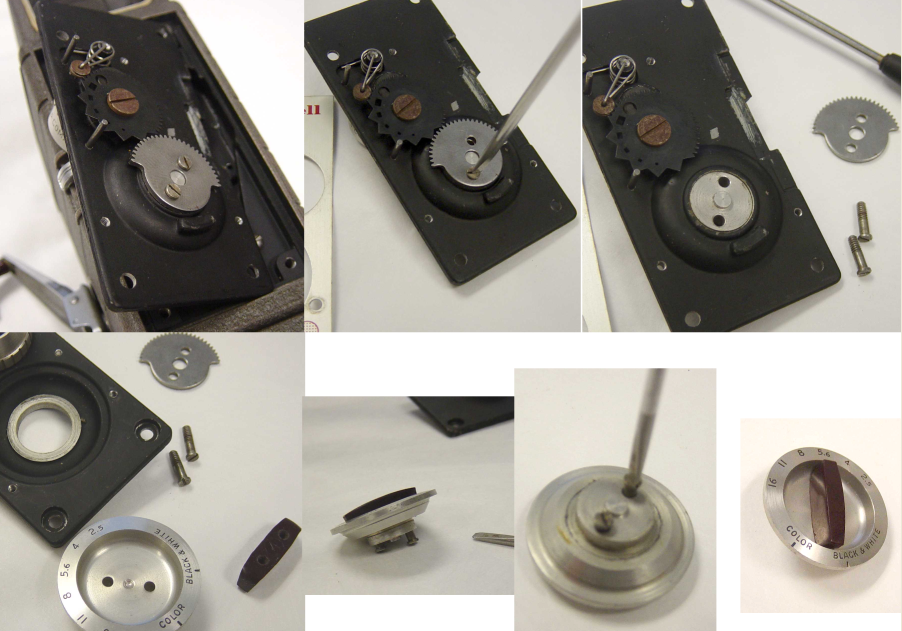 I also scored a set of Seagull knobs. Here's how to take the larger one apart and insert the B&H knob: 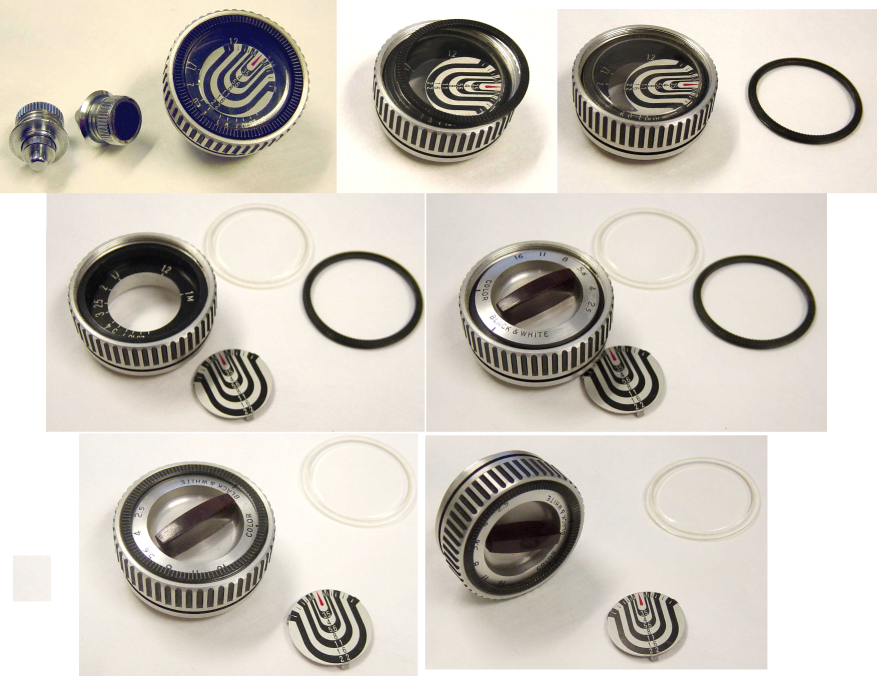 Dewback rider, I wanted to let you kow how much I appreciate the pictures you have posted. The step by step pics are amazing and wil come in handy when I take mine apart. Thanks and keep it up!

Thanks Jun. I'm trying to take step-by step pics as I go for just that reason, to help others that want to do this project. I had and still have a lot of questions about HOW a lot of the work is done.

Many threads show people acquiring pieces or making parts, and then suddenly they are on the macro set, with little explanation of how it got there.

Hopefully it will follow the same lines as my Sterling to E11 conversion.
If you ever do one of those, here's the link to my conversion blog:

Here's something to get you started on the Eumig:
http://www.therpf.com/f9/eumig-fixed-2576/

I have been playing around with a Transition Box Template which incorporates the thin mounting piece for the Kalimar, and the transition box into one piece.

Here is a link to the PDF I made:

If you want to try it out, print it at 100%, all fold lines in black are folded toward you (as you look at the printout).

The one line indicated with green folds AWAY from you (as you look at the printout).

The blacked out areas are to be cut out and open.


Cut it out and give it a try and see what you think.

EDIT: This transition box is just one I was playing around with making, and is not to be considered 100% accurate by any means.
Last edited: Feb 15, 2017

I was 10 when I saw Star Wars back in '77, and immediately wanted to live in that world, and play with those gadgets.

I bought the SUPER SIZE comic book and guided by its drawings (because there was not even a VHS tape to review and freeze-frame for images to work from) I made a wooden lightsaber from what I had available - 4 pieces of quarter round molding that I glued together, cut, hollowed the emitter end out, painted rust-oleum silver and added black grips, a screw in swiveling loop hook in the end, and a jeweled activation stud on the handle, just like the comic.

I didn't know then about Graflex ear tabs for holding in the bulb of the flash handle, I just knew SOMETHING stuck out from the back of the saber's front tip, so I glued on two small strips of wood there too. 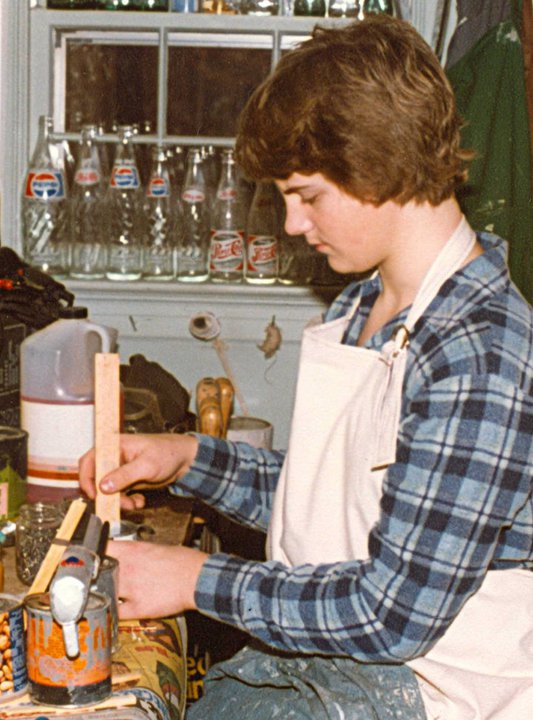 I also wanted a set of macros like Luke used on Tatooine, spying on Tuskens, scanning the horizon. So, I set to making a set - again, out of what I had lying around. I was 10, so I had to be creative.

I started by gluing four 2x4s together to make up the main body. Sanded them smooth and painted them black. They were heavy, but it seemed to me then that macros should have some heft to them.

Again, I turned to the pieces of quarter round and glued them together for what would become the eye pieces/viewers.

You have to remember, this was 1978, and there was precious little reference material except the 20-30 times I had already seen the movie.

My father worked for the telephone company overseeing several projects that had to do with mechanical switching centers,and he was always bringing home burned out circuit boards or bits of equipment for me to have for my "projects". Many of those parts can be seen on these early macros, as well as a few TV parts, cassette recorder pieces, part of a watch, a few rivets pounded in to give the surface more greeblies, and in later years, a part of a wrecked X-wing model became a permanent resident above the eyepieces.

On the bottom, I attached two steel straps that I had clamped in a vice and hammered around into a U shape for belt clips. The weight of the 2x4s needed something sturdy to hold it up!

The "lenses" on the front were made from spray paint can tops painted black, because the inner loop inside looked sort of like the recessed lens opening.

This piece of my childhood, which survives with layers of dust, a few missing pieces, gross inaccuracy, but lots of love and commitment to the build, are why I am working on my screen-accurate macros today. I just thought I would share the motivation. 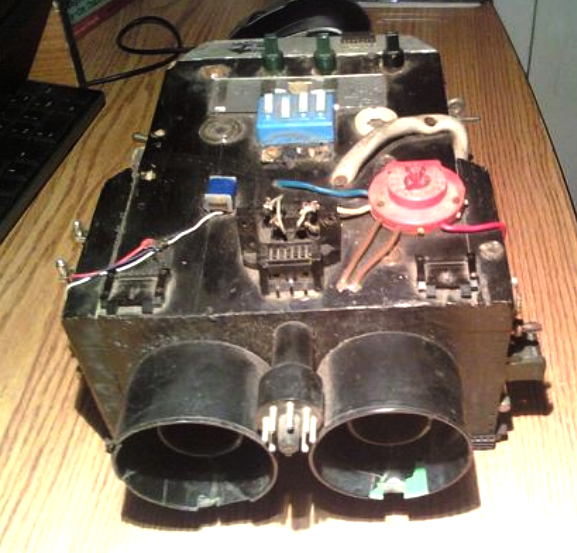 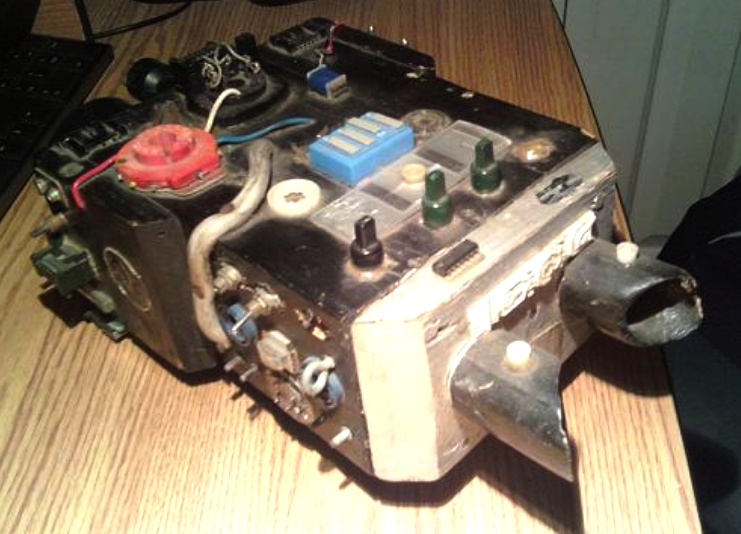 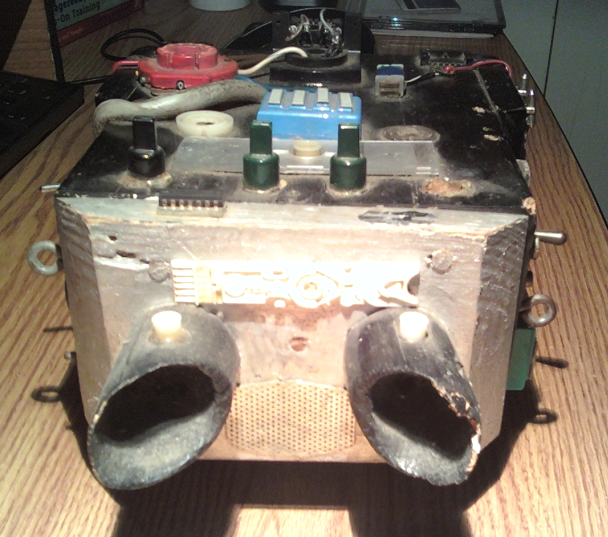 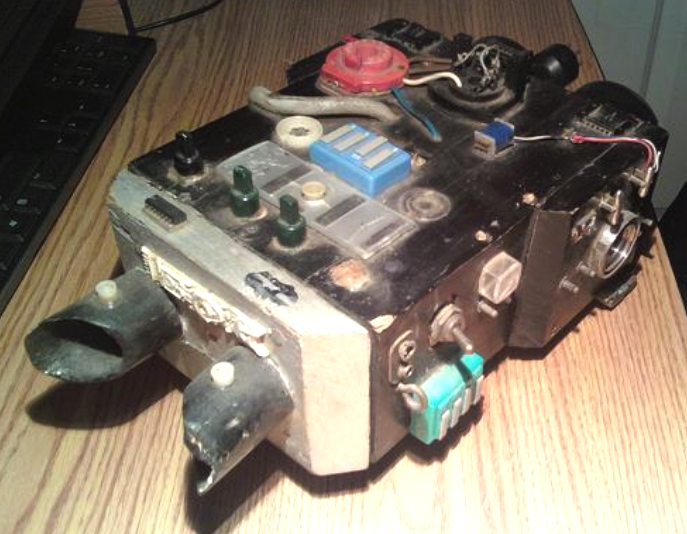 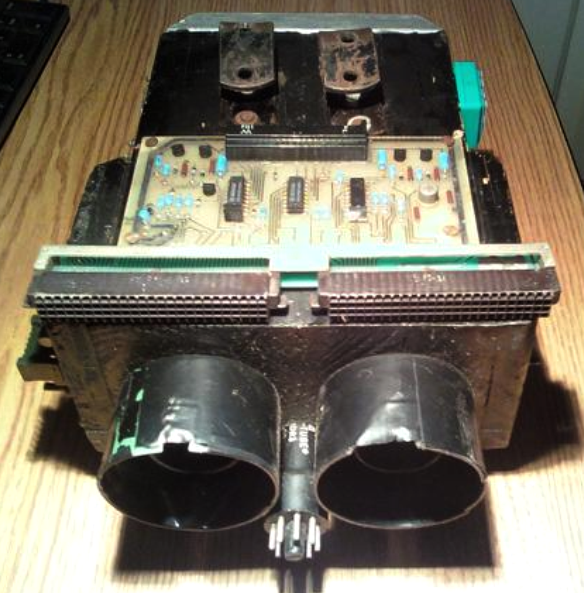 Fantastic, and thanks for the detailed tutorial too!

Thanks, and you're welcome, Rich.

And the Kalimar viewer should slip perfectly into the opening for either screw-mounting or gluing. I'll try that when I get home and snap a quick pic.

EDIT: This Transition box is just one of my own design, and is not remotely accurate. In the end, I decided to use one produced by another member here.
Last edited: Feb 15, 2017

This thread is great, and very helpfull.

Many thanks for your work.

Dew,
Thanks for sharing your "early" build. That thing is awesome!!!

I had a lot of fun building those early macros and carrying them through many adventures, on many distant planets, somehow all contained to my backyard.

When your young all you need is your backyard. Aint that awesome!!

Here are a few pics of the Kalimar viewer placed in my transition box. The fit seems to be perfect.

Does anyone who has built a macro set have any comments or critique of this new transition box design?

PastorJedi just made me a custom plaque for displaying my macros once completed.
Thanks for the beautiful work!

I also had him make up some for a few of my other props: