RPF PREMIUM MEMBER
Thanks M! Yeah Im using actual kit parts where I can but really who owns 20 Aurora M8's? Or 15 Sealabs? Some of the long OOP kits I will be using castings unfortunately.. as I cant afford or want to find the total number needed... I will start a post on these tiles over at studio scale modeling. I am still amazed at the level of detail you achieved at that scale.... brilliant.

RPF PREMIUM MEMBER
...How dare you call yourself a true studio scaler if you don't have 20 Aurora M8's or 15 Sealabs...:lol

I have a couple of kits that I used as reference (the ones I could afford), so if you need any castings I can help you out there.

RPF PREMIUM MEMBER
...Well I have finally finished the pattern for the 6inch version of module 5...

...actually, it's been done for a couple of months, but I have recently moved house and it was stuck in a box, along with my moulding/casting equipment, but now we're getting a bit more sorted, I found the time to finally remove it from the rubber (I had poured the silicone before we moved so that the pattern was well protected!).

...anyway, here are a few shots. I managed to correct a few 'best guesses' I had made on the 12" version as I had uncovered a few more bits of reference, and ID'd a few more parts...

...they are available now too, in my 'project runs' thread... 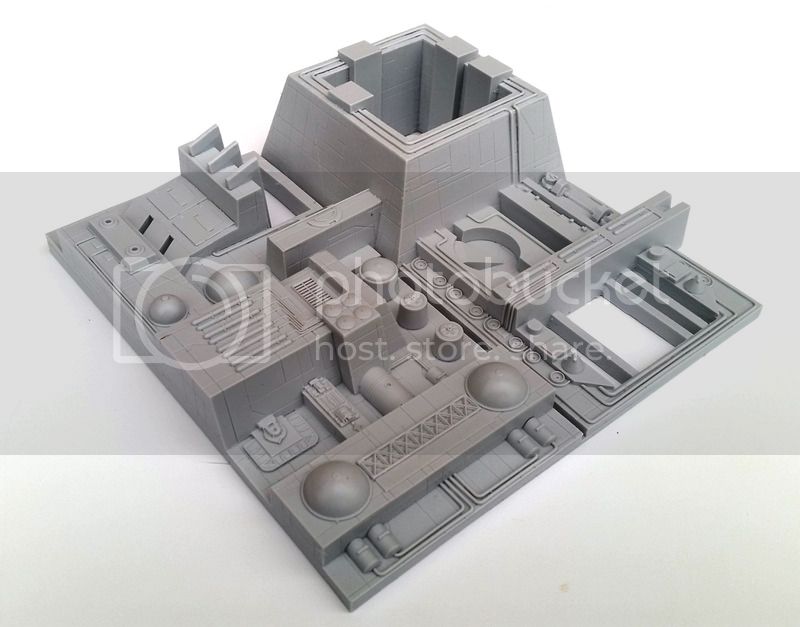 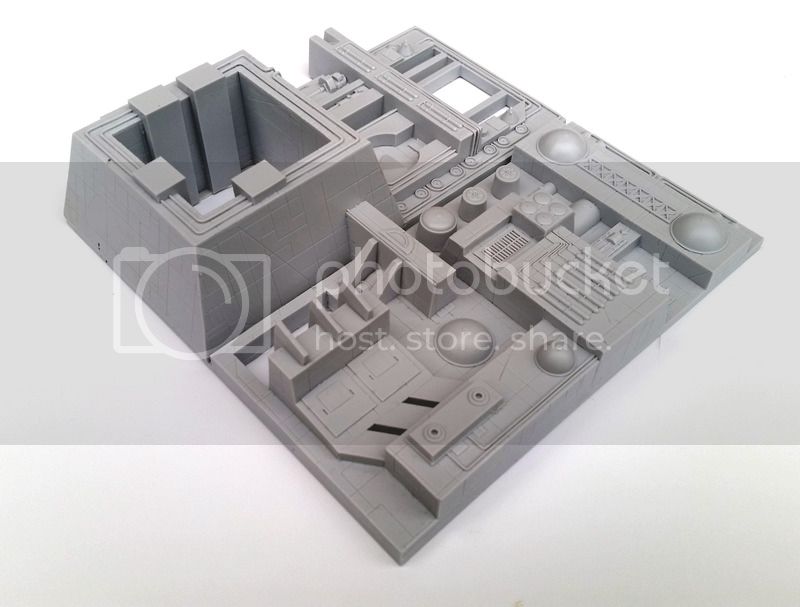 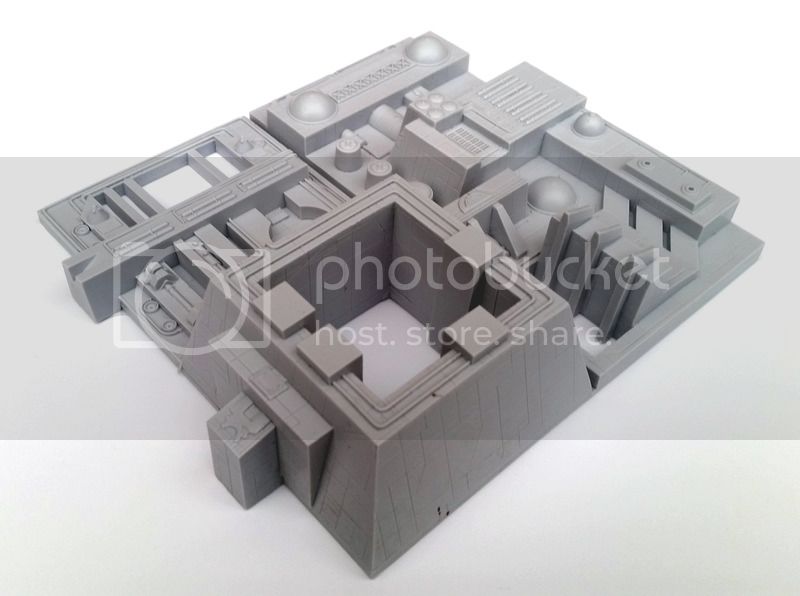 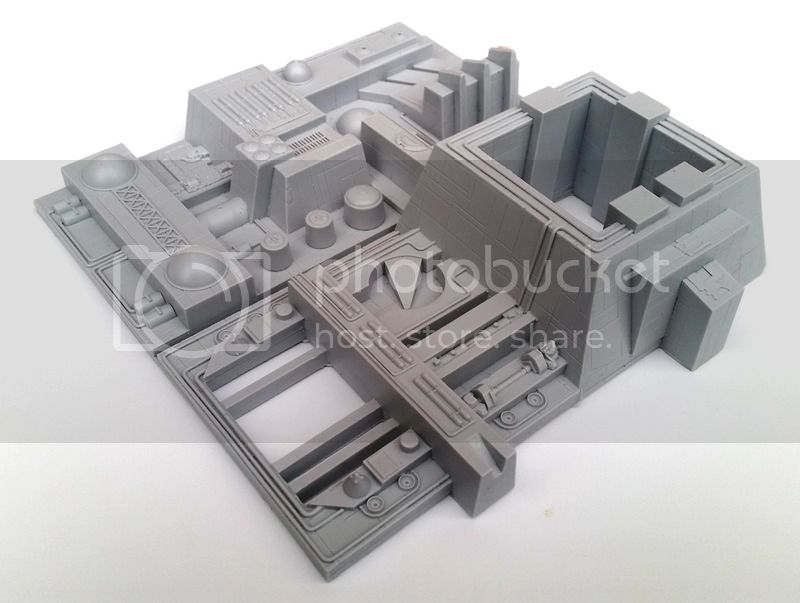 Minifig - firstly let me say how insane these Death Star tiles are.

I read in a thread that you wouldn't mind giving information out regarding the model kits used to make these wonderful tiles.

If you could share which ones I'd need, would be greatly appreciated.

I've tried searching online to find any references and couldn't find anything apart from some fan made props or original tiles that are for sale.

Any information would be greatly appreciated.

I don't have a list to hand, but there is nothing that I've IDed so far that wasn't already used on other ships for A New Hope.

I'm not deliberately trying to be awkward, but the list is very long, at some point I will try and do a parts map, I just need some clear photos of each module to use!

If you have any specific ID's your looking for then that would be easier to answer!

But a few off the top of my head are:

i love your tiles, they are a great piece of work with lots of details, real dedicated art. :cool

Have you made progress on tile set #3 in any size?
Are you still planing to do a turret gun or the exhaust port? Would love to see those.

I'm very interested in getting a bunch of these tiles. I scanned through the thread but didn't see where I could buy them.

I have an unlimited run thread in the junkyard section here:

All the info about the modules is in the first post, and you can PM with details of what you would like.

You're very welcome. Will setup a monthly reminder if it helps.

Btw. i'm searching the net up and down since we wrote for pictures of the hero modules #3.
Hundreds of surface and tile pictures - no luck so far. Damn it. Where are those tiles?

My package is listed as arrived. Will check tonight and comment later.

Just came across these, I've been looking for Death Star Trench tiles to go with a pair of Bandai 1/72 Star Wars models, they look fantastic.Bandai supply 3" tiles with the X-Wing, TIE, Y-Wing etc, so I'm a little confused - are the Bandai tiles in fact too small?

RPF PREMIUM MEMBER
Raven Morpheus - The Bandai tiles are great, but whether they are too small is a matter of opinion! If you were trying to recreate the trench run, then the actual trench was only 1 (Hero) module wide and 1 1/2 modules high ( it was originally 1 1/2 wide but was redone to make it look tighter, and I think there may be some shots in the movie that still use the wider trench). Even in the 'Hero' trench, the smaller scale tiles were used to add more detail/texture.

In case you missed it I did some 'ship-to-module' size comparisons back at about post 120 in this thread that might be useful.

Just came across these, I've been looking for Death Star Trench tiles to go with a pair of Bandai 1/72 Star Wars models, they look fantastic.Bandai supply 3" tiles with the X-Wing, TIE, Y-Wing etc, so I'm a little confused - are the Bandai tiles in fact too small?
Click to expand...

Small is a matter of perspective. If your models are flying over the tiles on display (as opposed to landed next to a scale building), who's to say if they are too small or large?

Eventually I'll complete my diorama and plan to print a 2D forced perspective on paper/cardboard that is blurred for motion.

minifig said:
I have had a request from member GreatChewie about the 'scale' of the modules.

As we've discussed somewhere before its a bit tricky to determine, as the 'low altitude' model (which included the hero shots of the trench etc...) used versions of the modules from all 'altitudes' in order to give them more variety and texture.

The best thing to go on, I think, is the knowledge that when we see the shots of the ships in the trench, the trench is approximately one module (24") wide, and one and a half modules high (36"). The vertical walls seem to be placed 'outside' the tiles along the trench floor, so it may seem a little wider in places.

Next comes the personal opinion of how much room the ships had when they were flying down...we know they had Vader's TIE and one either side, and that when the TIE hits Vader then the wall, it doesn't move far, so it can't be much wider than these three ships.

Anyway, I have taken some photos of various scale ships against the modules I have made for comparison.

We have from left to right:

So there you go!

RPF PREMIUM MEMBER
Yeah, it almost seems to me like the actual movie hero modules ( the '2 foot' modules) would be about the right scale for 1:72.

Thanks for answer.
It's damn big! I guess you are not equipped to mold tiles of this size.

RPF PREMIUM MEMBER
No, and to be honest it's the reason I had to cut up the 12" modules into quarters.

Qrest Fourstar said:
How can you see the fighters in 1/350?
Click to expand...

These are 1/350 scale resin fighters and legion miniatures.the legion x wing is pretty close but the tie is no dice