RPF PREMIUM MEMBER
So far the meager info I can find is that they both light up. Can anyone help with specifics like, what they're made of, how they differ, etc.

Does anyone have one of the DC Batteries? If so please give us some info.

RPF PREMIUM MEMBER
So far this is what I found on Amazon about the DC Direct version:

BlueMirageStudio said:
So far this is what I found on Amazon about the DC Direct version:


If I'm not mistaken, the ring itself doesn't light up, just the lamp. The ring has a magnet inside it which activates the lamp when they touch. (same principle they used when they did their comic version set, jsy different sculpt)

RPF PREMIUM MEMBER
Yeah, I kinda figured that. Being the DC Direct is being described as Cold-Cast Porcelain, does that mean only the light port lights up and not the rest of the body?

RPF PREMIUM MEMBER
I found a couple of pics someone took at a con. It appears the DC version body is translucent. I can't post them right now cause I'm at Disneyland with my family. But when I get back in town later this evening I'll see if I can post what I found.

Has anyone found anymore info on the Noble Collection item?
J

I have no more info on the Noble Collection one, other than that it goes on sale in September.

As for the DC Direct one, it hit comic shops yesterday! UPS isn't planning to deliver mine until tomorrow, but luckily, GL Corps Message Board member gl2814h has already shared pics of his Movie Power Battery Prop Replica!

gl2814h said:
I know someone posted pictures in the merchandise thread but I thought it should have its own. So here is a few pictures of the power battery.

Some pictures in the dark

Pictures of the ring

RPF PREMIUM MEMBER
I just got my "In Stock" notification from Big Bad Toy Store today so mine should be shipping soon - been waiting a while and really looking forward to it. In the meantime, someone has already posted a video review on YouTube:
‪GREEN LANTERN MOVIE POWER BATTERY PROP REPLICA REVIEW‬&rlm; - YouTube

So the ring looks like utter crap, but the lantern itself looks amazing! If the lineage it's said to have is true, then it may be worth picking up.

Wow, I'm glad that the lights flicker, and the activation is actually pretty cool, so I'm happy I kept the pre-order. I was on the fence because I didn't enjoy the film as much as I wanted. :cry
J

Just delivered to my house by UPS: My DC Direct Movie Power Battery Prop Replica, along with the 2 Movie Power Ring Prop Replicas I pre-ordered at the same time! (I pre-ordered them on the same order, so Discount Comic Book Service held everything to ship it all in one shipment. :thumbsdown)

Can't wait to get home from work and open this bad boy up! :love

I think it looks really great. What does it use for lighting? Does anyone know if it opens up and if so- how?
J

Honus said:
I think it looks really great. What does it use for lighting? Does anyone know if it opens up and if so- how?
Click to expand...

LED light source, more than that, I haven't heard.

To answer the question about the battery compartment, you remove one of the "lenses" on the face of the battery, and somewhere inside, there's a small white box that houses 3 AAA batteries. Don't know where they hid it, 'cuz with the battery lit up, it's very hard to see where the battery box would be blocking the light shining through the body of the prop. But it's in there somewhere. Removing the "lens" on the face of the power battery prop requires a small Allen key... I believe a 1/16th size.

When the battery is open, you would presumably have access to the LED light source, but as you can see in the pictures, they've put some kind of paper or fabric in there surrounding the light source, to simulate the look of the "ribbons" of emerald energy seen within the battery in the movie. You would presumably have to move that out of the way to access the light source and I'm assuming it would be a pain in the butt to put that stuff back in the right way. The lantern is nice and bright, so I'd just leave it alone.

The ring that's included is made of PVC, as are the rings included with most of the Power Battery Prop Replicas. This makes the decision to make it a size 14 even MORE baffling. It should have been set to a more normal size, say a 9 or 10, because then the PVC band would flex to fit larger fingers. But to wear this size 14 monstrosity, you'll have to find a way to make it smaller, with some kind of ring sizer... unless you wear it over a pair of gloves.

I have the ORIGINAL GL Power Battery Prop Replica from 2000. On that Power Battery, "off" means the light is only activated by touching the included magnetized ring to the magnetic activation switch, activating the light for 30 seconds. "On" means the lantern is CONTINUOUSLY LIT. I like that a lot! thumbsup

Compare that to the newer models.... where "off" means COMPLETELY OFF, will not light AT ALL, and "on" means that the light only comes on when you touch the ring to the face, and it only stays on for 30 seconds. I DON'T LIKE THAT. But what can you do? That's the way DC Direct chose to make the newer ones.

RPF PREMIUM MEMBER
I have mine arriving Wednesday!
Im pretty curious about the Noble Collection version though, at nearly half the price it is also said to be cast from an original and it also lights up - I'm wondering what the differences will be? I always thought only one licence holder could do a prop replica?

RPF PREMIUM MEMBER
Well sounds like the DC version is a good buy. I'll see if I can get one of these. I'm sure I'm only going to get one for a reasonable price on eBay. BTW, the video review was awesome. Thank you so much for posting that. I look forward to getting one of these.
T

Received mine today...LOVE IT! The light up is amazing...the ring is terrible, they used a different one for the photos which I dislike but you can't have everything I guess...heh

RPF PREMIUM MEMBER
Ok well I got one off of ebay for about $300. Not bad, not great but hey, it sounds like it will be worth it. Hopefully it will get here before my trip to Vegas.

RPF PREMIUM MEMBER
Got mine today! It's been a long wait, I had mine on pre-order since February through BBTS.
The more I handle this thing the more I love it! It really is cast off the real prop as I've seen photos of the real deal dissasembled. The paint job looks pretty good too.
My only complaint besides the ring is that it does not light up as easily as I would like - it may take a few tries to get the magnet to register just right.
A few months back, I was thinking of cancelling my pre-order on the ring replica since I figured the lantern was coming with one anyway - I'm glad I didn't! Not only did the ring replica sell out super fast, but it is far superior to the one that comes with the lantern - the included ring the the lantern is basically a gimmick - as mentioned before - to light the lantern and really has little merrit as a prop replica on its own.
Not sure how this will compare to the Noble Collection lantern, but it looks like the Noble version has less black finish and more of a candy green gloss finish. Theres too is advertised as being cast of the original and lights up...we will see.
Since no one has yet to post photos of the box, I have done so below, as well as a few pics of my new prize... 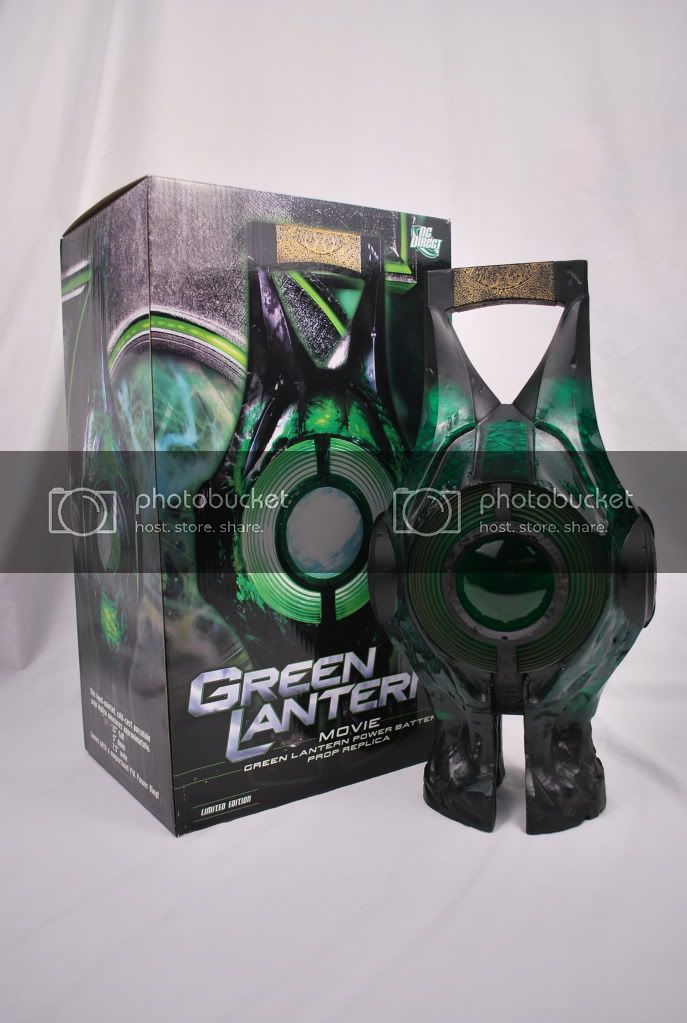 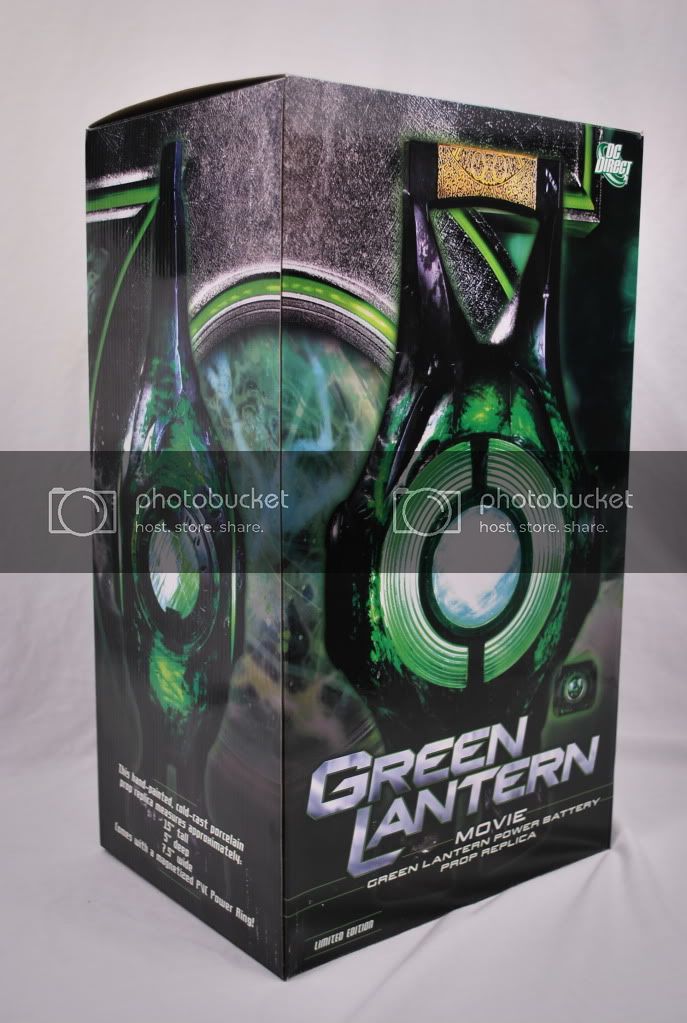 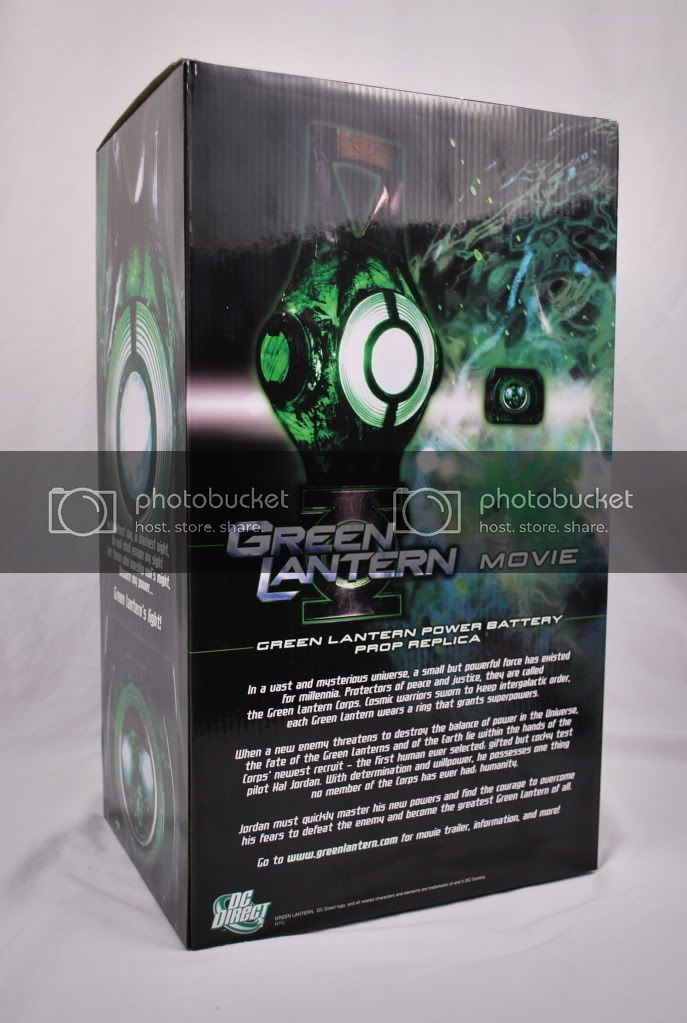 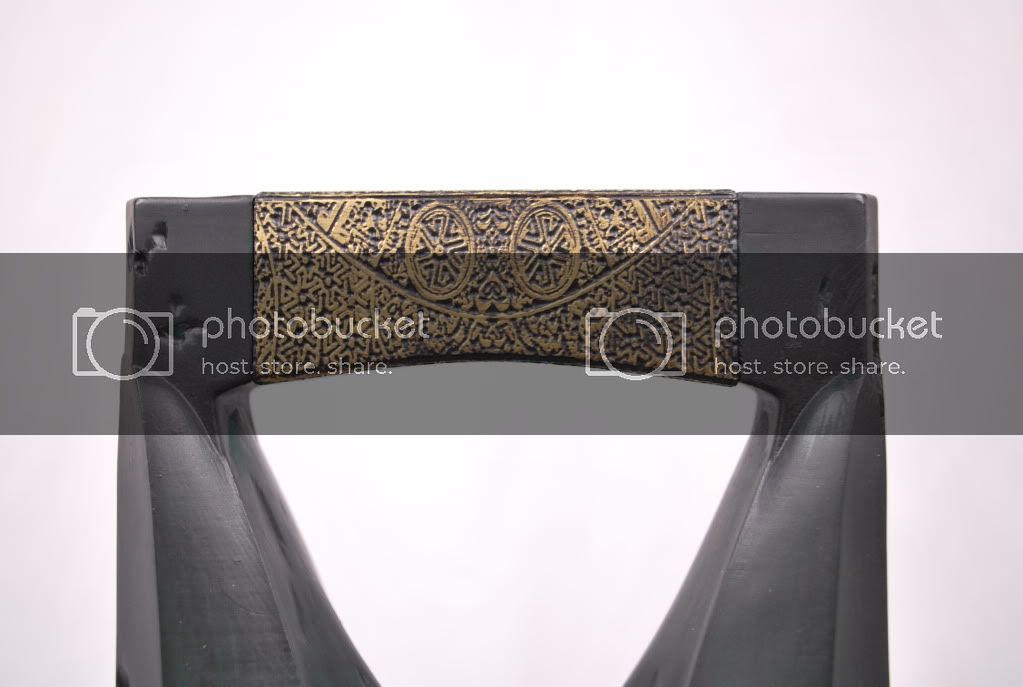 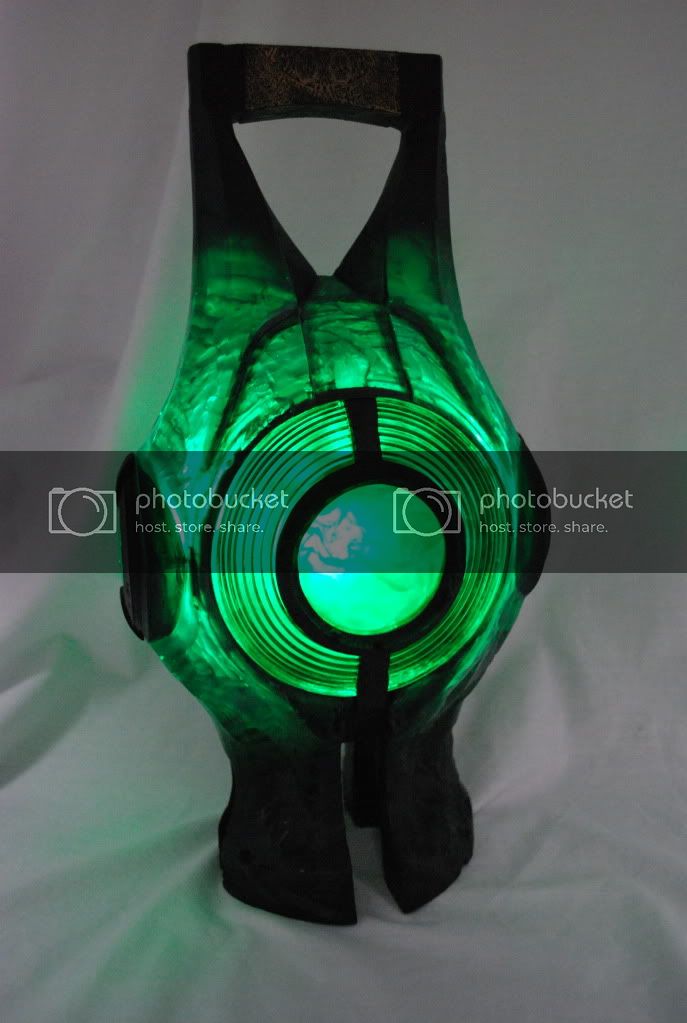 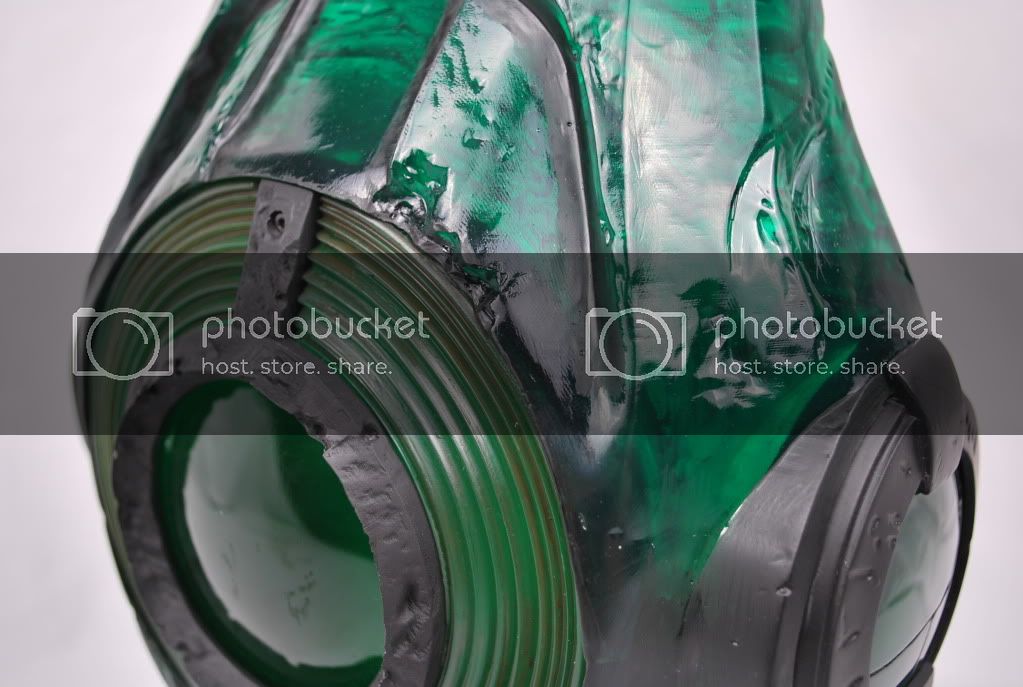 RPF PREMIUM MEMBER
Killer pics! Thanks so much for posting them and your review of the lantern. I'm really jazzed about getting mine now.

RPF PREMIUM MEMBER
It really is a great prop replica - I can't see how the Noble version could be better other than the price point.