I'm happy to help! I'll admit I'm not the most creative person, but I like the idea of creating props. I am good editor if that is helpful. I'm also very good at finding idiosyncrasies (formatting or language) in documents, much to the chagrin of those at my work ;-)

Discord - A New Way to Chat with Friends & Communities

Discord is the easiest way to communicate over voice, video, and text. Chat, hang out, and stay close with your friends and communities.

discord.gg
For those who want to, here is a discord channel i just started that we can start using.
Click to expand...

Thanks bro for creating this discord !!! Love that my idea came to life. I've been a bit busy but know I'm back to help you all out
A

I'm a latecomer but I'd really LOVE to be part of this project. How do I contribute?

Hey! We're trying to get a hold of you to add you to the Discord server. You disappeared.

First of all I would like to say a huge thank you for everybody who has contributed to the effort to collaborate on this book. It never ceases to amaze me what is possible when people work together for a common goal It really is amazing how much details you all have already brought together!

I have been into the idea of making a replica of Advanced Potion Making ever since I saw the first replicas online years ago. Recently I got back into it and finding this thread finally got me going to start my own.

My first contribution to the collective effort is a retyping of the Wolfsbane Potion already provided by the Magician back in June 2019 (see this post). I have found another image online with some more details (see attachment). Also I noticed some oversights and misinterpretations when comparing the images and their PDF. I transferred word for word truthful from the images, so the new, attached PDF should me much more precise now!

Don't pay to much attention to my formating. I am still trying to figure out what tools I want to use. This was done in LibreOffice Writer which worked okish, but I had some pains with the formatting. So I think I want to try Inkscape next. But either way the potion is now in text form and people can use and format it which ever way they want.

There is one thing I noticed about this potion. It should not be in this book! Here is why: Snape used the book as his school book when he went to Hogwarts. Snape was in Hogwarts at the same time as Lupin. Lupin had to go into the Shrieking Shack every full moon to turn into a werewolf. If the potion had been invented at the time and was known wide enough to be printed in a school book, I am sure the Dumbledore would have given it to him, like he did later when Lupin was a teacher.
Another thing I noticed is that it seems like the images are of a replica. I could only find two of them online. The background, and especially the missing endpaper, leads me to belive they are pictures of a replica.
Either way I think the instructions are thought through and really well done though. Since the potion is within canon I think it should definitly be kept in!


One question I am having is: Were is the current development happening? Has the project just been dormant for the last half year? Or has it moved to Discord? If so, the link in this post no longer works...
Anyway I would love to get this going again, connect with you all and help out where I can!

Thank you all so much,
Foaly

Hello!
I have worked a bit more on the wolfsbane potion section and wrote another page with some background information. I gathered the information from the books and the harry potter wiki. I also found a scan of the "Schedelsche Weltchronik" a book from the same time as Paracelsus lived. It has some neat medival looking woodcuts. I frankensteined a few of them together to make the werewolf graphic at the end of the section. I'm not totally happy with the moon phase image on the top of page 3, but my graphics skills are limited in that regard ¯\_(ツ)_/¯ So yeah if anybody has some feedback or improvements I would love to hear it

I think I will now start to write the section about Antidotes including Golpalots Third Law (unless anybody else has already started it)!

Also if somebody has access to the mentioned discord channel, please let me know how to join!

hey, I really like to join your discord! I am good at graphic design and a huge Potterhead. So can you please add me? Honolulu #0383
Kind regards, Salmander...

MuggleMagic said:
Hey! We're trying to get a hold of you to add you to the Discord server. You disappeared.
Click to expand...

Pls send out the link 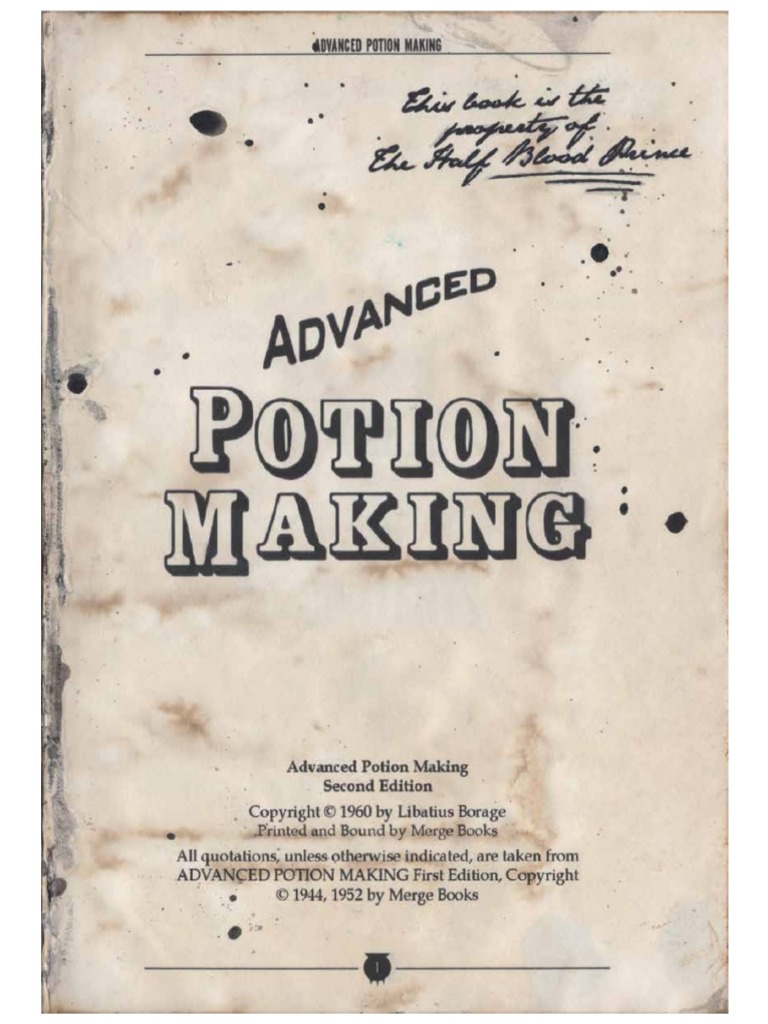 Scribd is the world's largest social reading and publishing site.

I've sent out quite a few messages to different people about the discord channel, but none of them have gotten back to me yet. So I guess they are probably doing their own thing now... ¯\_(ツ)_/¯

Anyways I have been spending quite some time in the past couple of weeks on research. Mostly on the cover layout, the right dimensions and printing on linen. I think this is what I will be focussing most of my energy on now, replicating the book cover both front and back as well as the spine perfectly accurate (including silver foiling and everything). And I have to say from the few prototyping steps I have taken so far, book binding seems like an incredibly enjoyable making field to dive into. Looking forward to it!
I'm also fully aware that the content writing will take month if not years (which is totally fine by me, as I've been thinking about doing this for a long time). So far I've been really enjoying it as it is a funny mixture of rereading the books, writing down potion details, screenshoting the films, looking through scans of medieval books and writing "scientific" fan fiction. It's been quite fun so far.
On my accuracy priority level the books are definitly above the films, so for example even though I have some pictures of the polyjuice potion page from the prop, I will go with the instructions mentioned in the book Chamber of Secrets.

So yeah I guess I will drop back here every now and then to check back and update on my progress, but like I said it will most likely be a very slow and long project

Here is my final version of the wolfsbane potion. I completly rewrote the instructions, as I felt they are not complicated enough (which is emphasized in the books) and I did not like some of the ingredients (holy water felt out of canon to me for example).
I also wrote the chapter about Antidotes, but I could not come up with a good idea for Golpalotts second law yet.... I think I will post it once it is finished though!

Hello everyone, could you please drop the discord link???
E

the Magician said:
Someone has the "Advanced Potion Making" of Alarm Eighteen on PDF? And can paste it here or send it, please? My mail isaac_1414@hotmail.com
Click to expand...

hi do you got it i was looking for it too, for personal use only if so can you please send it to me please ??

I worked on , i will love join project discord please

I create a new discord because a think anybody is still alive here ^^
join me for work about project !

Discord - A New Way to Chat with Friends & Communities

Discord is the easiest way to communicate over voice, video, and text. Chat, hang out, and stay close with your friends and communities.

Hey guys! Yesterday I found out about all this Advanced Potion Making book replica dramas. Once again I've came pretty late. But now I feel like I need this book more than anything. I'm skilled in photoshop and stuff so I would be glad to help you on your discord if you need a helping hand.

the Discord group is now private. Only some of the creators are inside. Is not my bussiness. They decided who to include

I am on my own, making my own replicas. I exchange ideas, sources, fonts, etc; but not my full replicas. I'm a bit tired of some of my replicas being sold on Etsy without permission