RPF PREMIUM MEMBER
Many thanks everyone for your interest and support.

As this is my first ever run for the rpf I don't want to over-promise and under-deliver so I have capped this first run at 15 pieces. As ceramic production is a slow process I will concentrate on this first set and if all goes well and everyone is happy afterwards I will see about doing another run over the summer. By all means continue to add your interest to this thread so I can judge if any further runs are wanted.

As soon as I start the the actual run casting I will change the status of this thread from 'interest' to 'limited run' and keep you all up to date with progress. In the meantime I will continue to refine my technique with weekend practice runs. 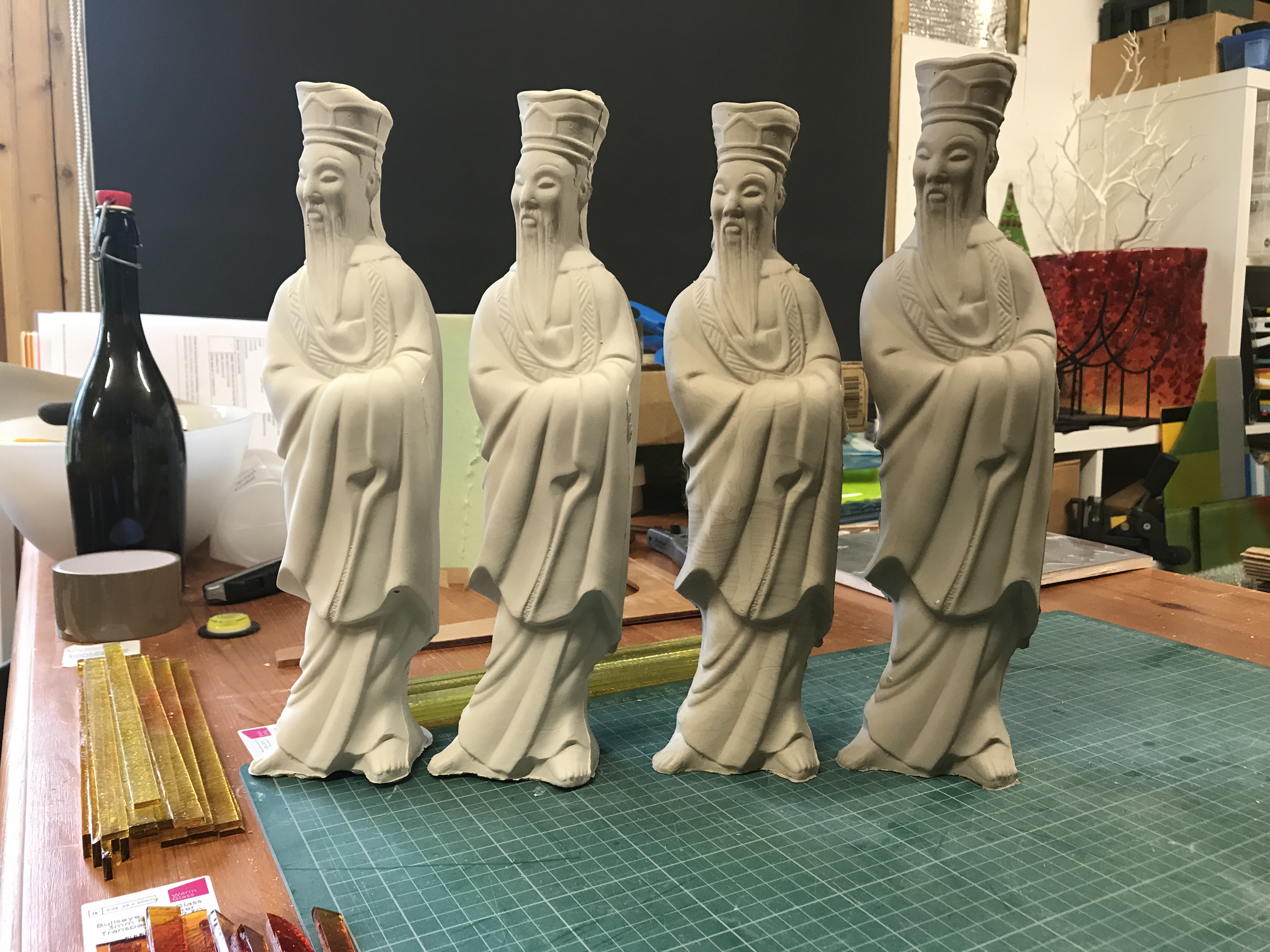 From left to right; 3 weeks ago, 2 weeks ago, last weekend, this weekend. As you can see the one demoulded today is about a centimetre taller as it’s still wet.

Excited to see this. If you need money for supplies I will pay now.

Eurojunkman said:
Excited to see this. If you need money for supplies I will pay now.
Click to expand...

So cool, thanks for sharing your progress, cant wait to see one with the glaze on!
Last edited: Feb 13, 2022

Very excited to see this coming together, and all the hard work you're putting into this project!

I think it’s just that detail shows up better on wet clay. As the clay dries it lightens in colour and the detail doesn’t show up so well. Hopefully all that detail will reappear when it's glazed.

RPF PREMIUM MEMBER
I have changed the designation of this thread from 'Interest' to 'Limited Run' and the first proper cast is in the mold now. I Know I'm about 10 days behind what I said would be the start date but drying is very temperature dependent and it's been really cold and damp here the past fortnight. Keeping the mold from becoming too saturated is the most important thing at the moment. With 'drying days' I aim to produce three casts per week so this part of the process should be complete in 4-5 weeks. Hopefully I will have the full complement of figures ready to glaze by the end of April (but be patient with me as it's my first run). 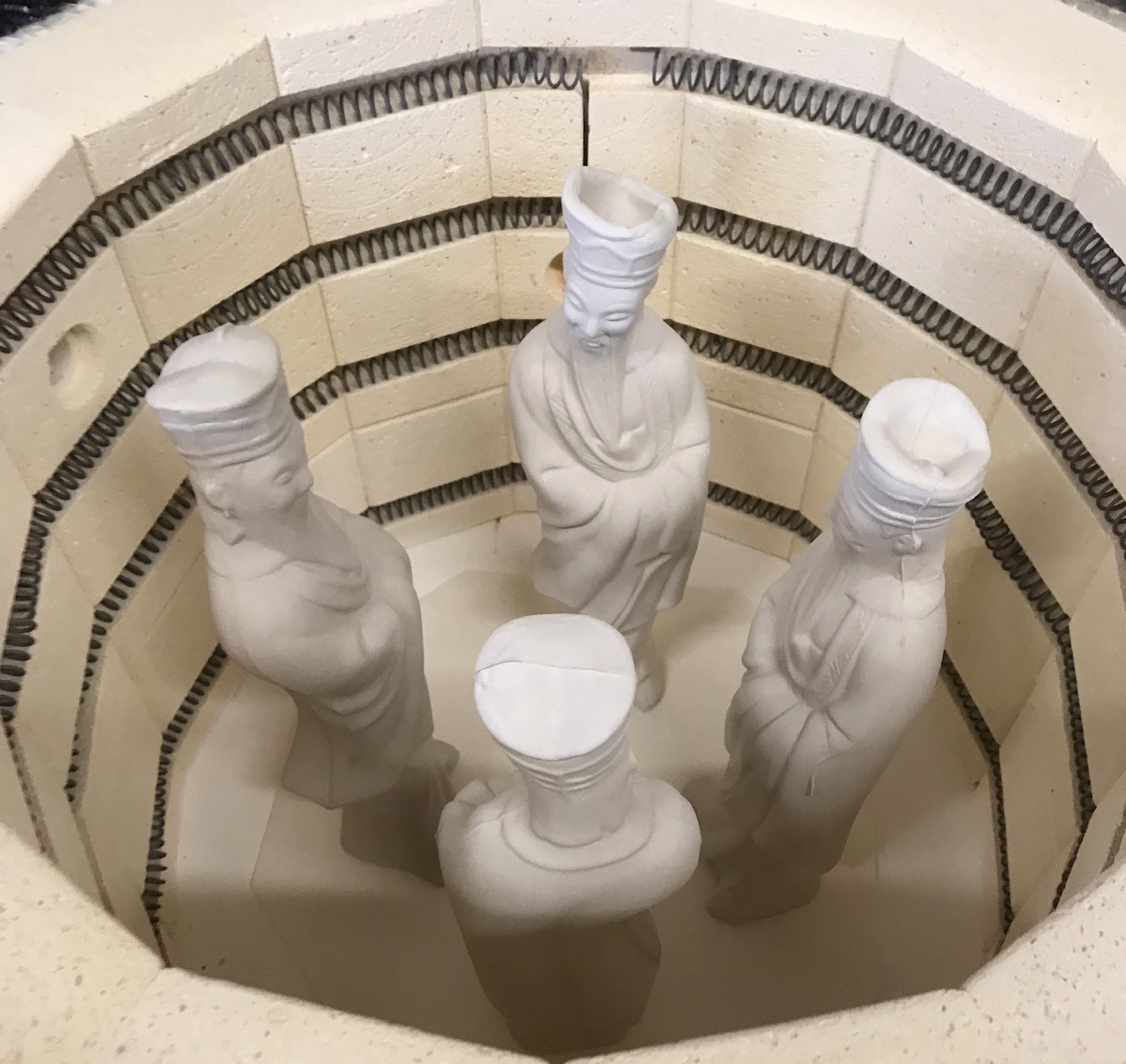 and here are the results 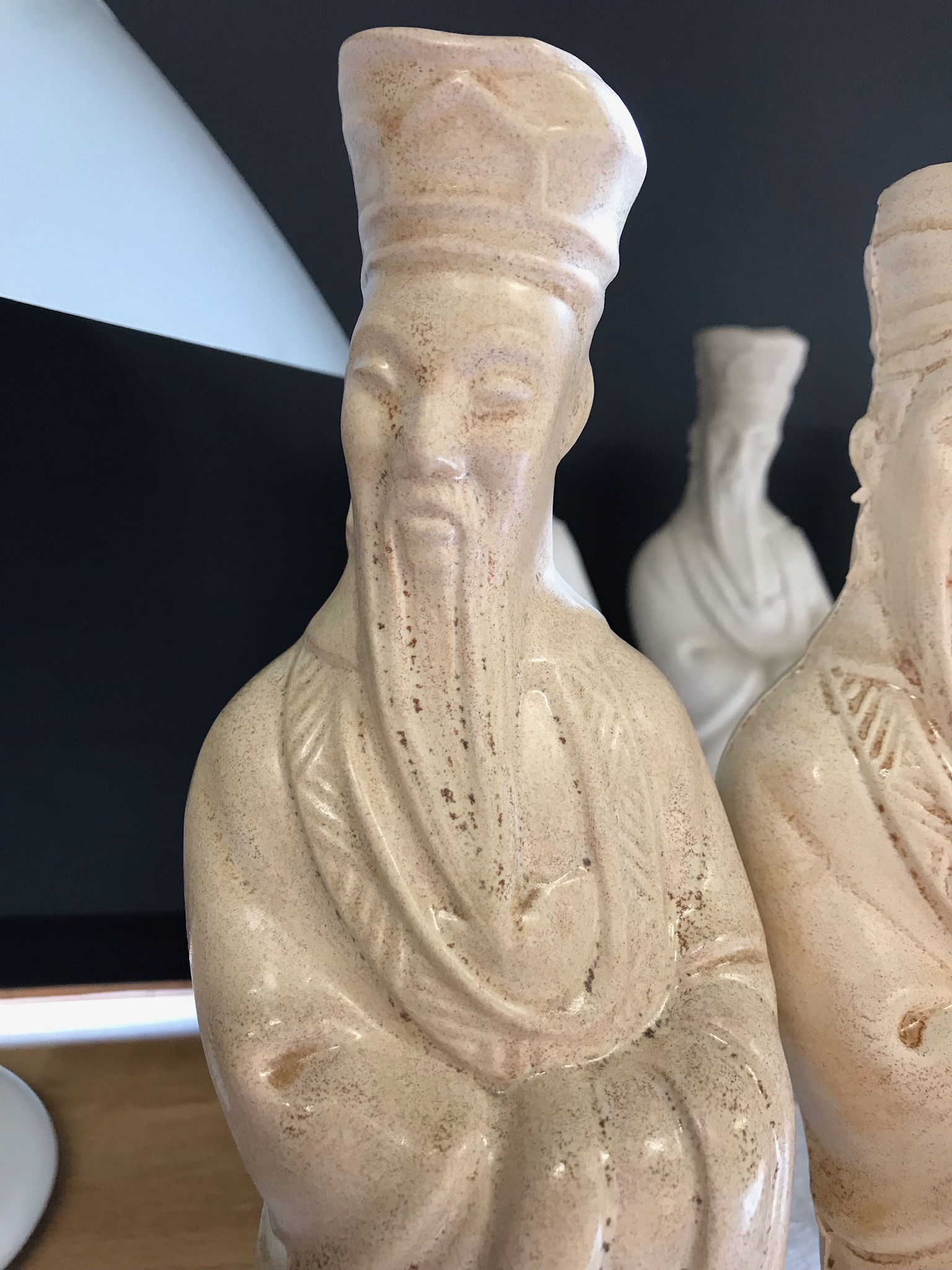 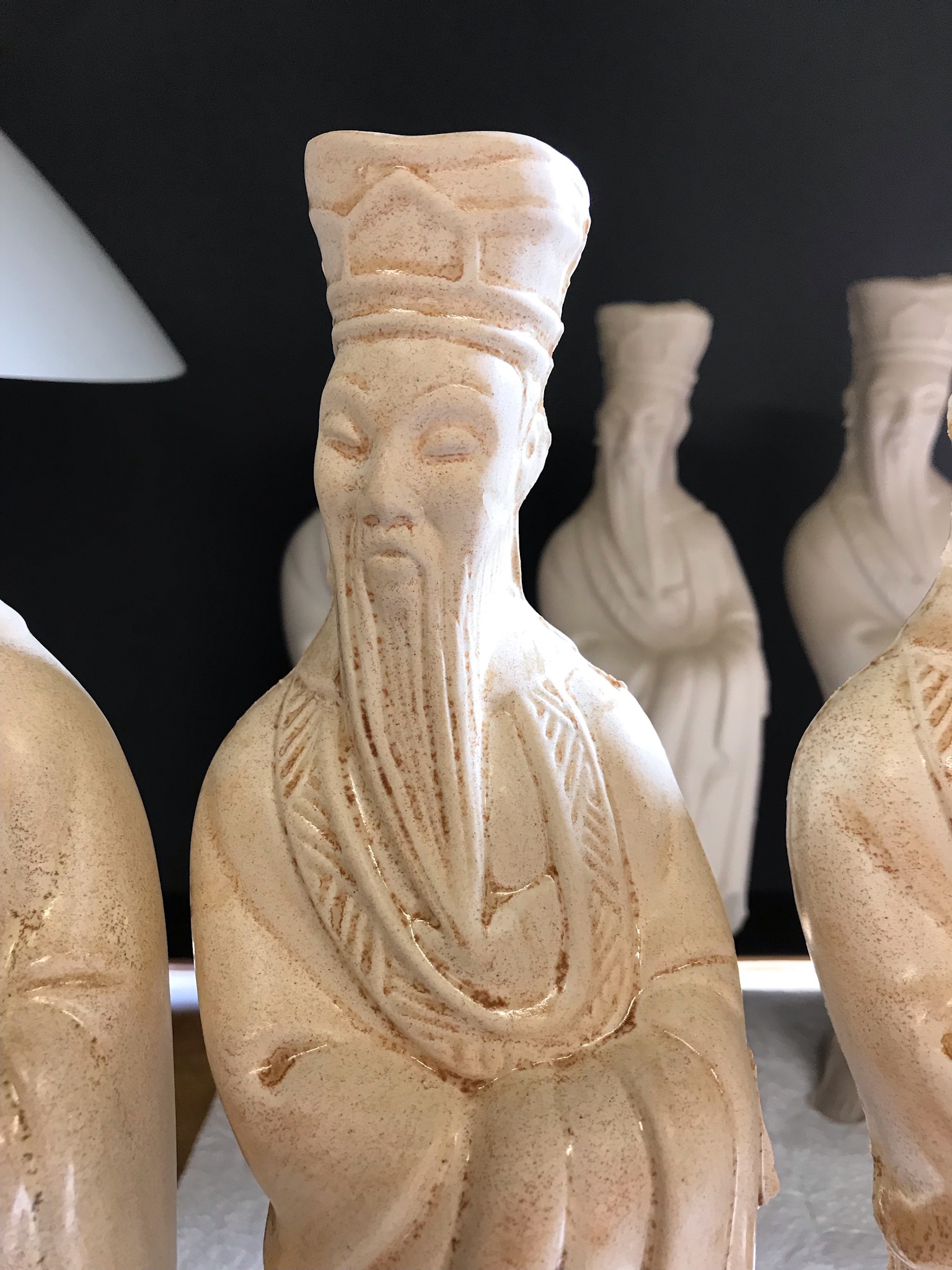 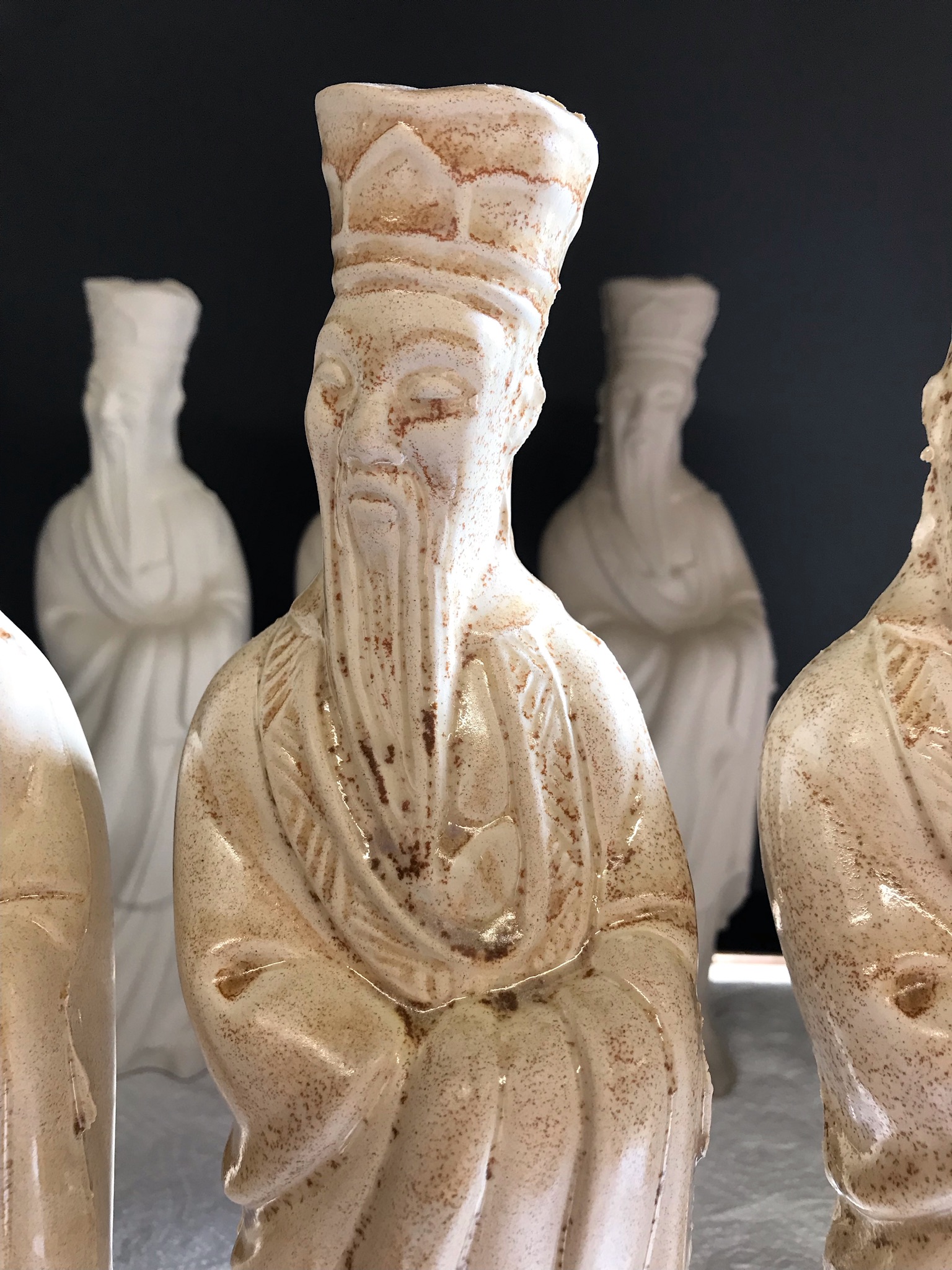 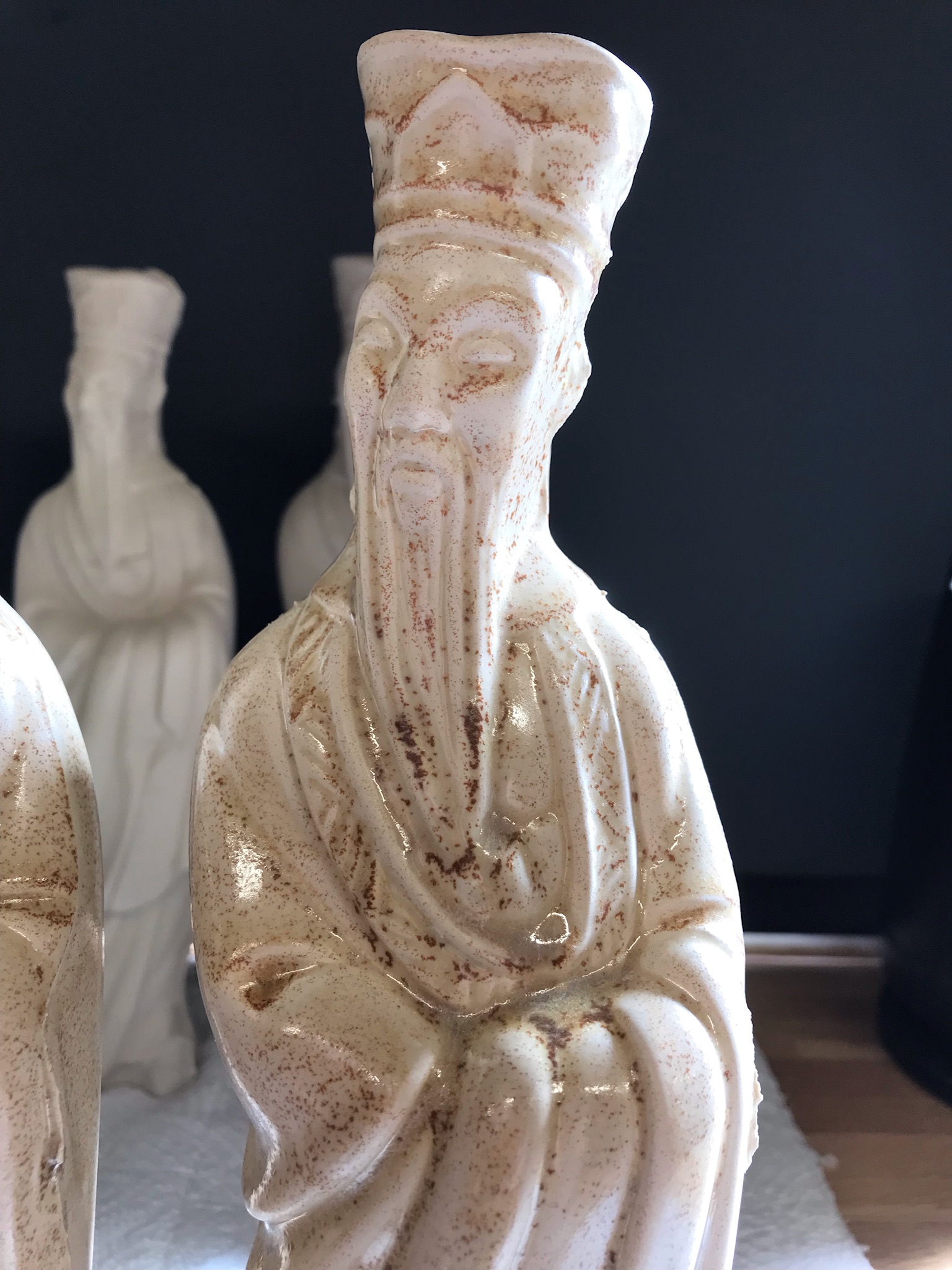 The best, for me, is number three. Two coats of glaze over a bisque-fired base. For me the base colour on this particular glaze is a little too creamy so I will investigate how it fires and may modify that or try another glaze from the same supplier. I still have four more test pieces to use up on this before using the good ones.
Last edited: Apr 4, 2022

RPF PREMIUM MEMBER
Thank you for the update!

RPF PREMIUM MEMBER
No rush on my end, mate. Thank you very much for the update. Looking forward to the next one.

RPF PREMIUM MEMBER
Nothing like spending a sunny Sunday afternoon in the garden shed listening to the birds and making Blade Runner props. 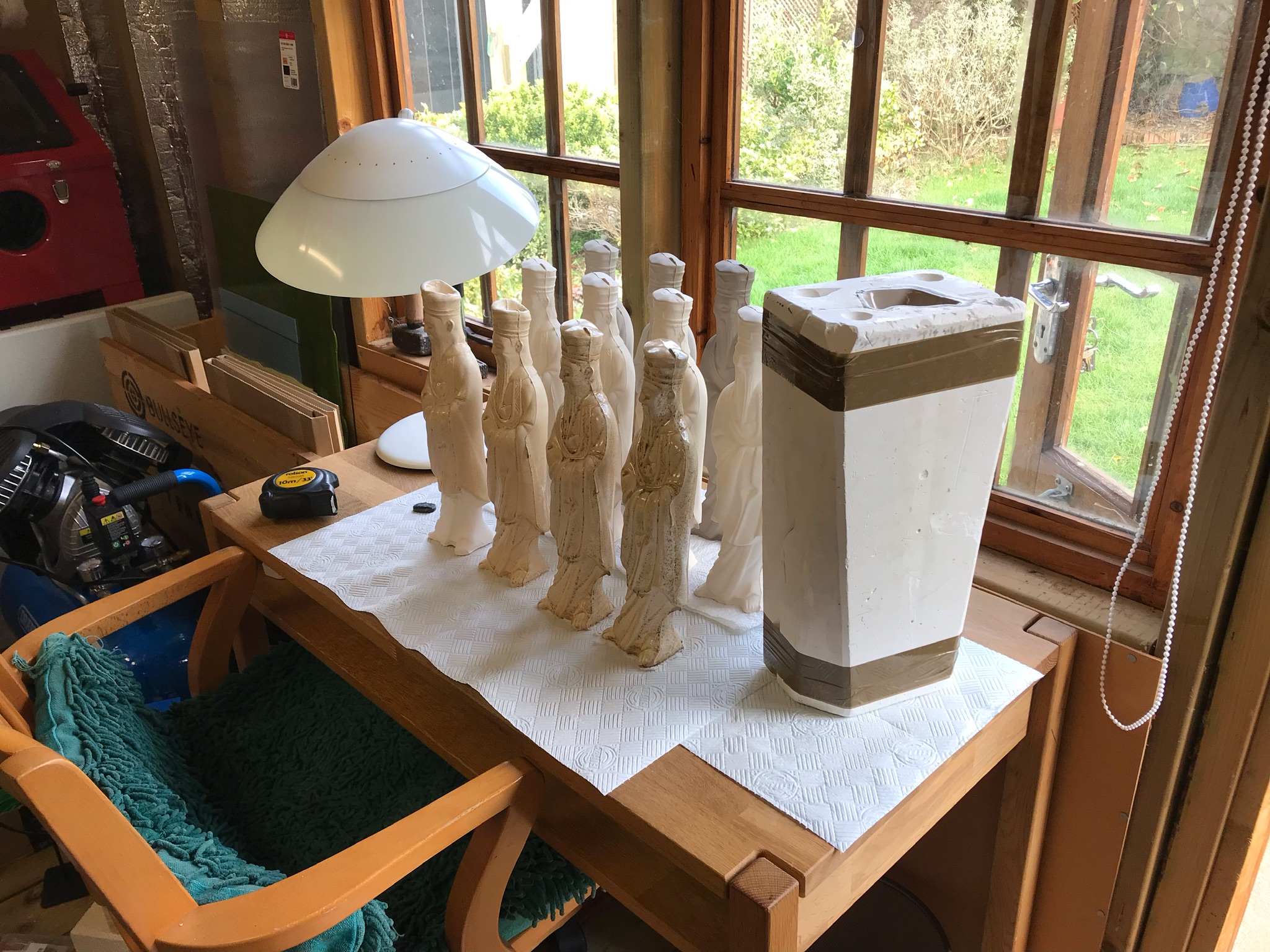 RPF PREMIUM MEMBER
Very cool, if there's a 2nd run, at some later date, I'd be interested, please.

userd1402 said:
This thread is to see if anyone is interested in having a copy of the ceramic Asian man figurine from Deckard’s apartment in Blade Runner, from one of the original vintage molds.

I’m sure many of you will have heard of or seen the mysterious ‘Asian man’ statuette in Blade Runner. It appears in Deckard’s apartment in several locations including the bedroom (because Ridley Scott loved moving props around the set between takes). It’s a 12 inch high ceramic figurine of a Chinese ‘wise-man’ with a tall hat and flowing robes. The one in the film appears to be a light tan colour (difficult to be accurate because the film uses moody lighting and strong post-production colour grading);

In over 20 years of Blade Runner collecting I have only seen 4 of these in the flesh, including one I owned briefly myself, so they are certainly not common. My own had the date 1-11-1974 etched on the base before firing. I sold that one over a year ago, mainly because it wasn’t even close to screen-accurate (it was bright green) and it's important to note that none of the ones I have ever seen match the colour of the one in the film. Anyway, I was at home over the Christmas and new year break and on new year’s eve I was idly flicking through some far-eastern auction websites and I came across a vintage ceramic ‘slip-casting’ mold. The mold, part of a much larger cache of molds being offered, had received no interest from buyers but I recognised it as being the very same Asian man statue used in Blade Runner. These were original manufacturer’s masters and all had been in storage for many years.

Luckily as an artist-maker I have my own ceramic kiln and, by coincidence, some experience in slip casting. This must be fate. The mold itself is a big chunk of vintage plaster weighing over 5 kilos. It’s been well used and has a few edge chips which will mean the casts which come from it will require cleaning up by hand before firing but this is a great opportunity to do a limited run of completely screen-accurate Asian man statuettes.

While waiting for the mold to arrive from overseas I looked into replicating the light tan coloured glaze and after looking carefully at all the available pictures of the original my own feeling is that the glaze on the piece used in the Deckard apartment scenes is not a high gloss but a more silk finish. I found a pretty good match and this one is an earthenware glaze which fires at 1,060 degrees C. It has the nice silky finish and shows some variation in colour depth on detailed pieces. I like this one a lot and I think it will look very accurate.

As soon as it arrived I cleaned up the interior of the vintage mold with a soft brush to remove years of dust and it came up nice and clean. Next I reassembled the halves and bound them tightly together with packing tape. I haven’t done any slip casting for several years but there was still an old 5 litre jug of earthenware casting slip in my workshop gathering dust so I decided to try it without any further delay. The slip had thickened a little but for the purposes of this first test it was good enough. I filled the mold and left the slip to firm up overnight (in the summer heat this process would take about an hour) and the following morning I found the two sides separated easily. The cast has great detail and enough firmness to stand under it’s own weight.

There is only one small issue with this first test and that was the top of the man’s hat has fallen in where I stood the mould upright to allow excess slip to pour out as it dried. I will dry the casts the other way up in future. Although this first test wasn’t completely successful I’m really impressed with the finished size and level of detail in this cast.

I need to be very patient with ‘green’ slip casts and they can’t be kiln-fired until they are bone dry as any moisture remaining inside the clay may boil in the kiln, become steam and expand until the piece blows apart. In the summer heat these would be bone dry in under 24 hours but it’s January and it’s bitterly cold here (only one degree above freezing this morning) so I think I’m going to wait a few weeks before I try pouring any more of these. When in production the bone dry casts are fired to about 900C to produce 'Bisque' or biscuit-ware which can be further smoothed and sanded if necessary. The bisque is then glazed and returned to the kiln for the second firing, 1,060C in this case, and this produces the finished piece.

My plan is to get a stock of fresh white earthenware casting slip and do a short run of these in March when the weather is (hopefully) a bit warmer so if anyone would like a screen-accurate glazed ceramic ‘Asian man’ figurine as seen in Blade Runner now is the time to say. I estimate raw materials (clay slip, glaze), energy costs to kiln-fire twice and the time-consuming clean-up and finishing processes mean each one would cost £40.00.

First run full.
No payment will be asked for until finished, glazed figures are ready to dispatch.
If this run is successful a second run will be done.

Please add me to the interest list for run 2 please. This is awesome.
R

Hello! I'd be very interested in purchasing one to add to my ever-growing Blade Runner prop collection. If you're still accepting orders, please count me in. Thanks!

please also put me down for 2 of these on the 2nd. run if possible.

RPF PREMIUM MEMBER
Note to interested parties; 10 good casts pulled.
Note to self; be a bit more patient when demoulding! 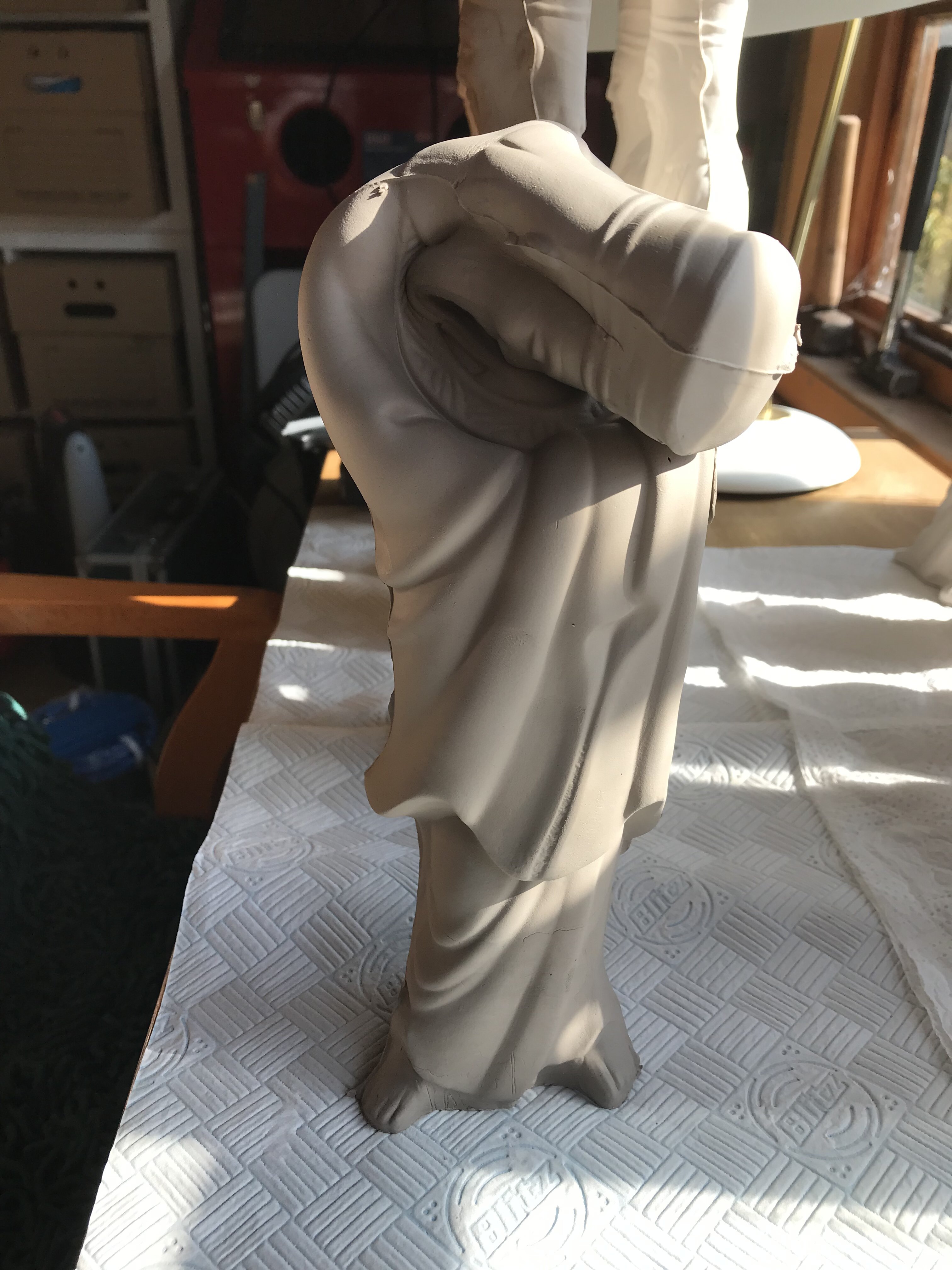 Please put me down for the second run. These look great!

Put me down for the second run, for two if possible please