I've been working on this for a few months, but until the last 2 weeks I wasn't making much progress.

Anyway, let's start with the cowl. I bought this from another RPF'er and for the life of me couldn't make it fit, so I did what any man would do: I broke out the power tools and cut it in half 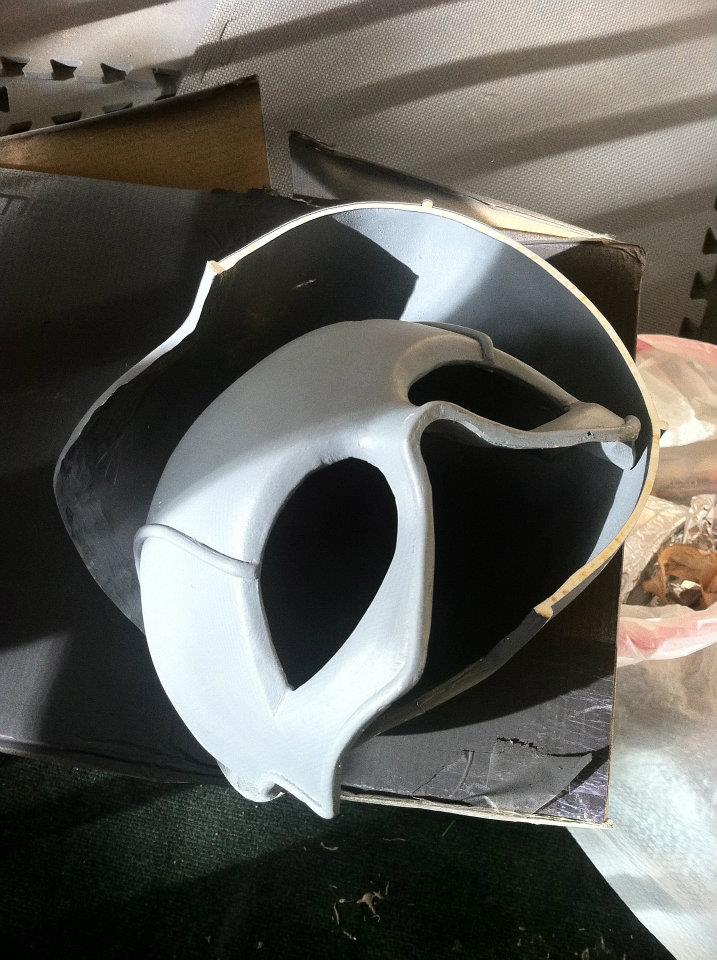 Then I hot-glued in a shim: 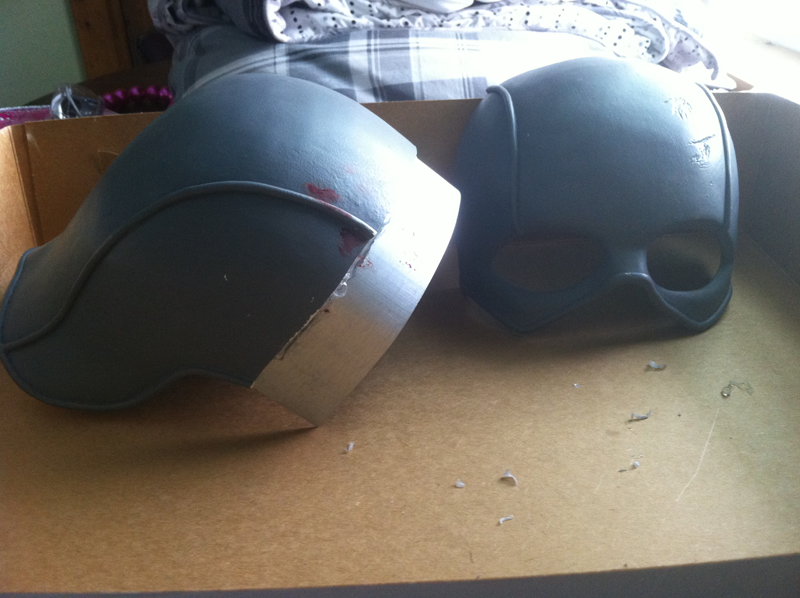 Yeah, that's my blood all over it. This is why you should wear work gloves when playing with sheet metal 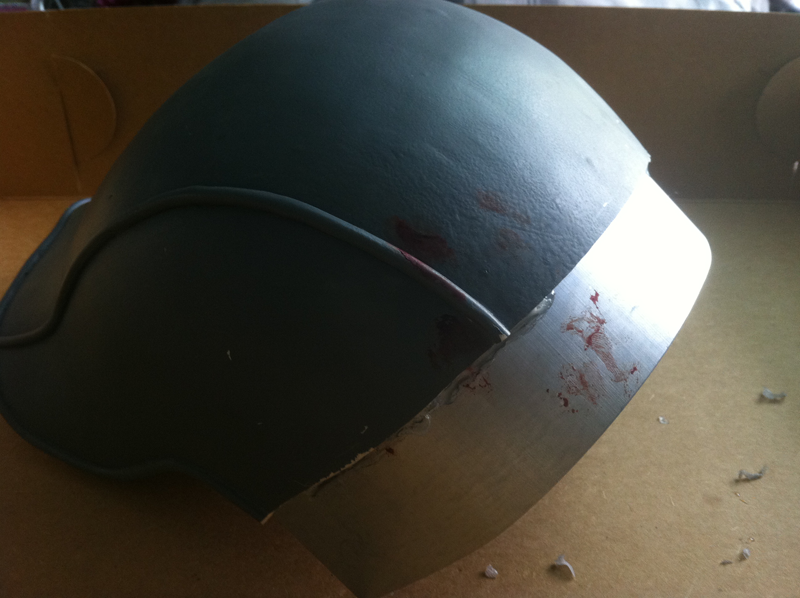 Anyway, I filled the gap with bondo then started sanding it down: 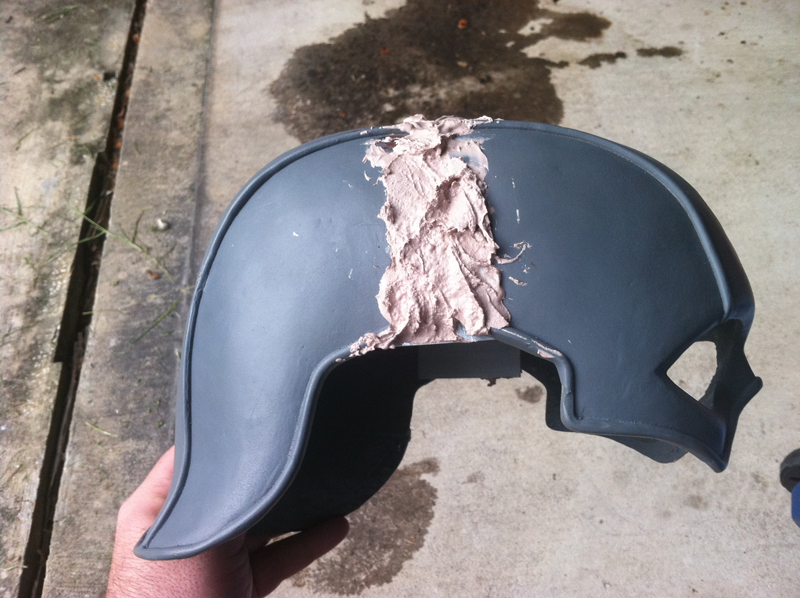 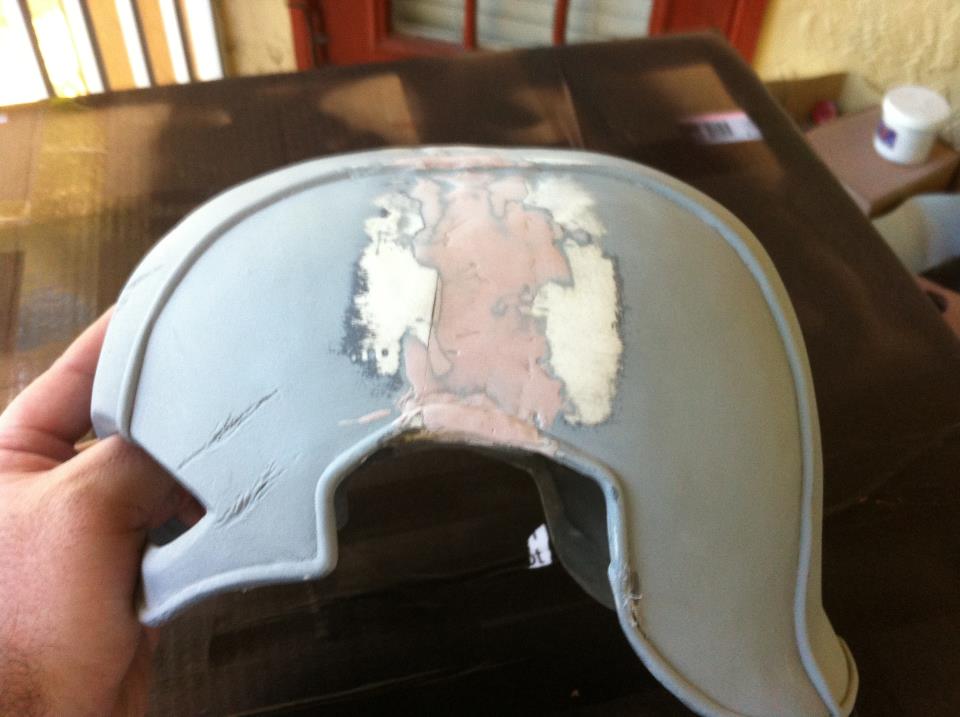 I didn't take any pictures of the next few steps, but essentially I primed the helmet, painted it metallic silver, rubbed toothpaste in the damaged spots, painted it blue, then wiped the toothpaste away to reveal the "metal" underneath. 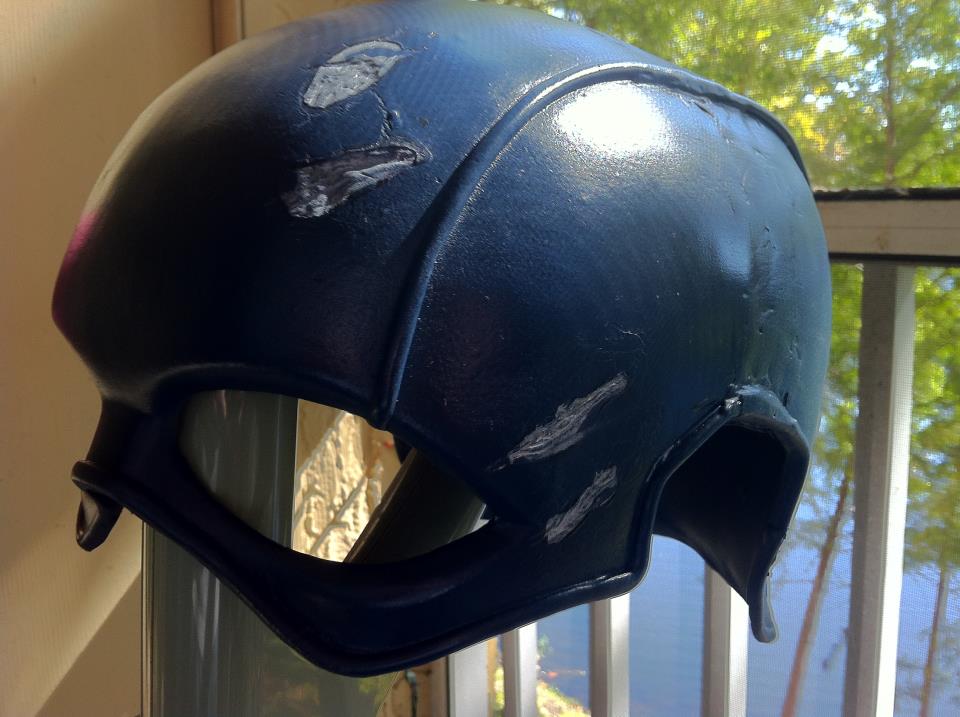 Just before the party I tried to to stencil in the A and the wings, and they came out terrible. I'll be repainting them blue, then painting those bits on by hand instead.

On to the shield! There's been a bunch of these threads on here recently, so I'll just post the pics: 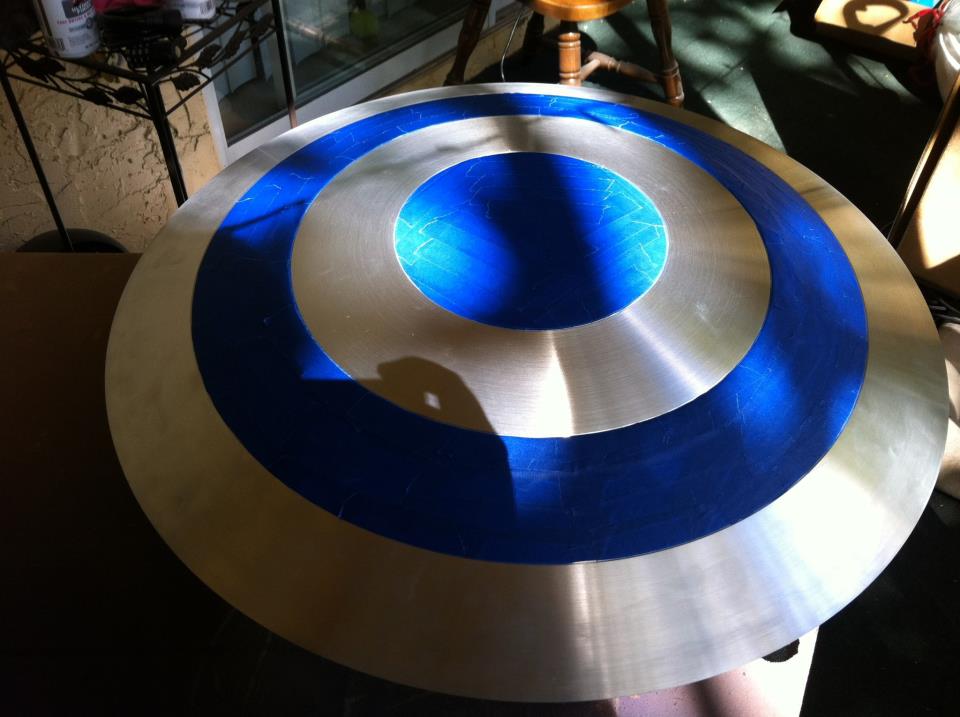 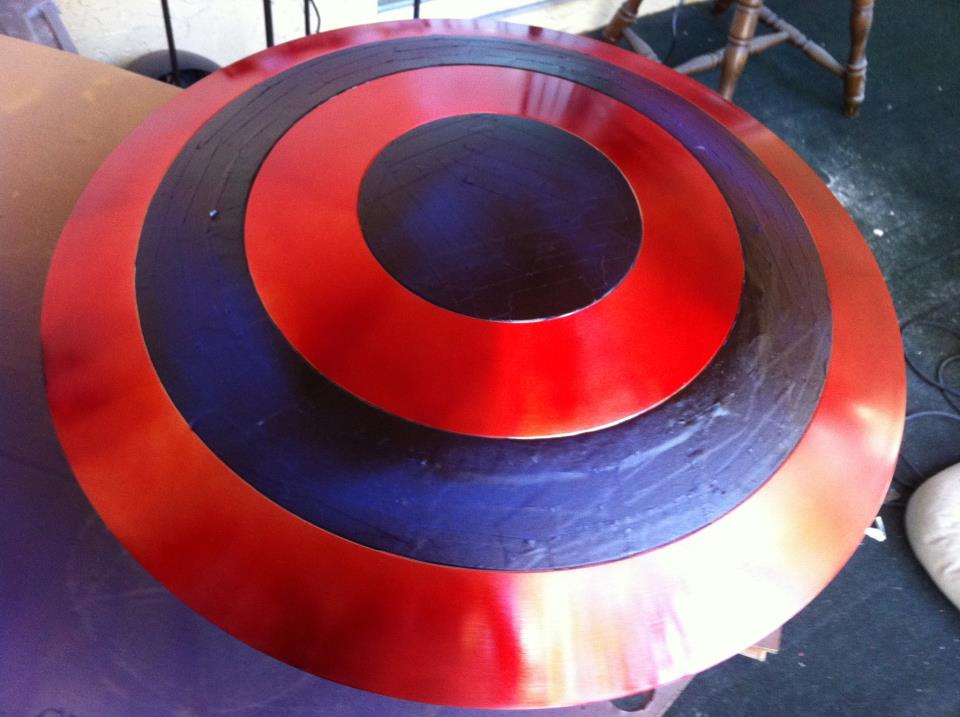 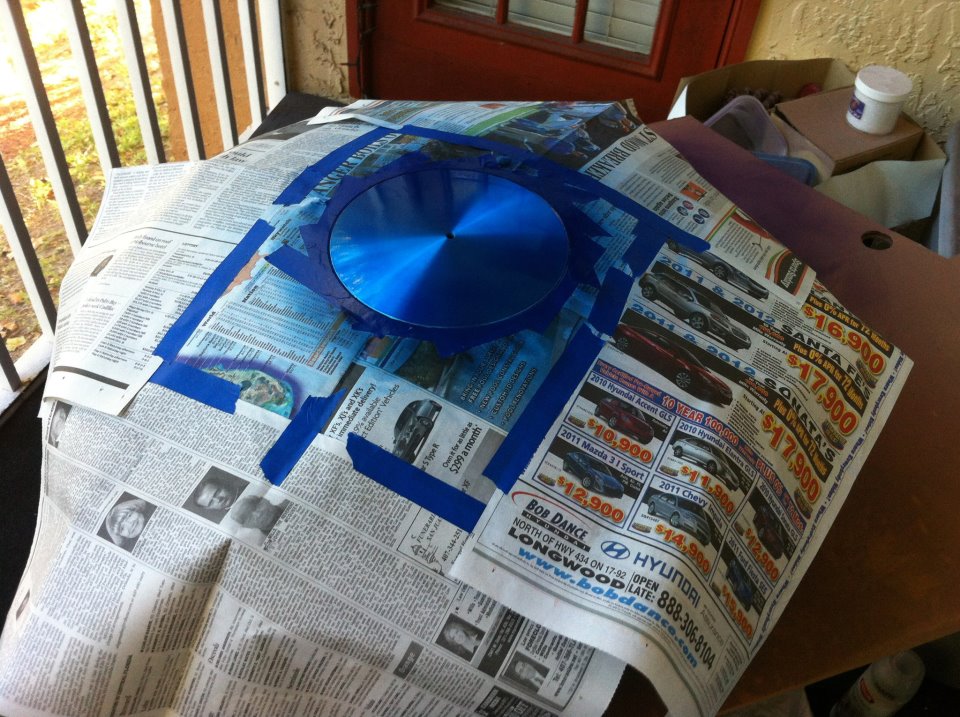 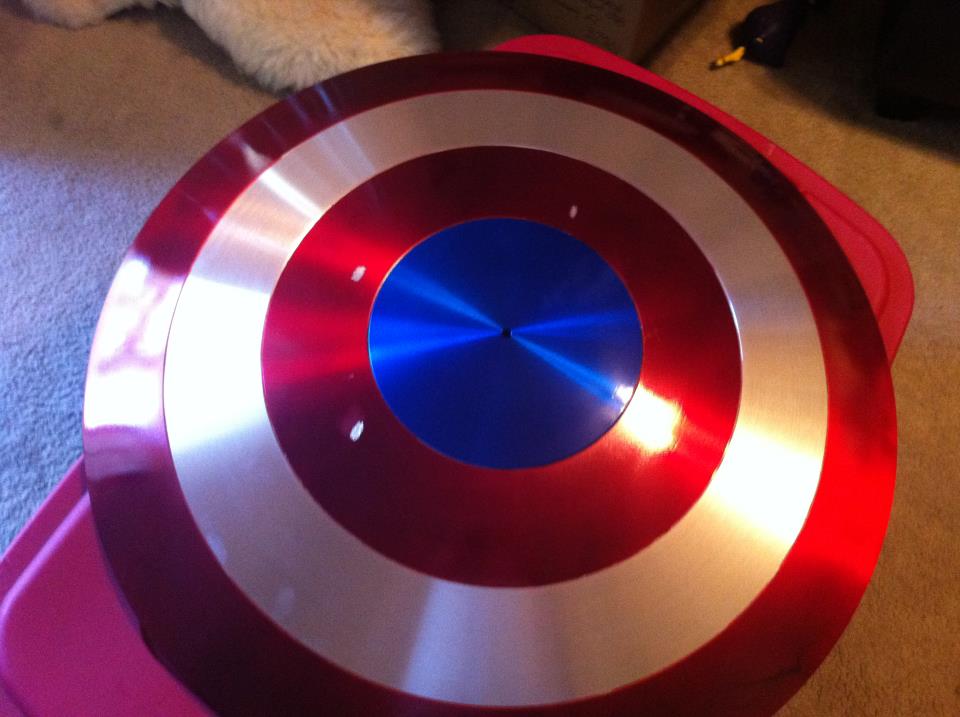 This is the only part where my shield is a little different. It's supposed to look beat up and shot, so I took the dremel and a bit of black paint to my pristine baby (sorry about the quality, it's a cell phone pic): 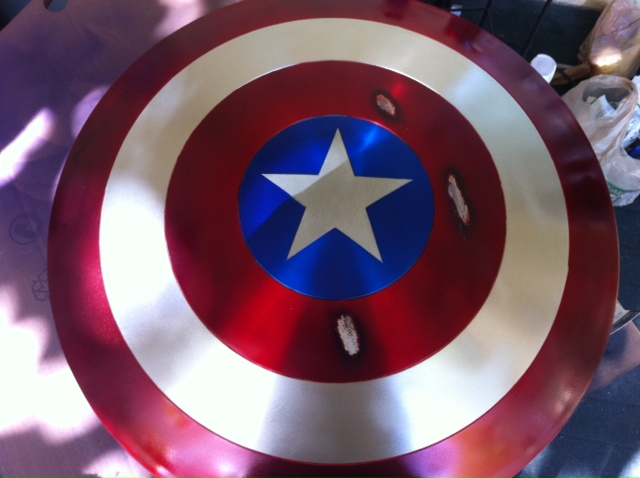 For the soft kit, I bought the basic costume from HelloCosplay. The price wasn't bad at all and overall I'm really happy with the purchase. 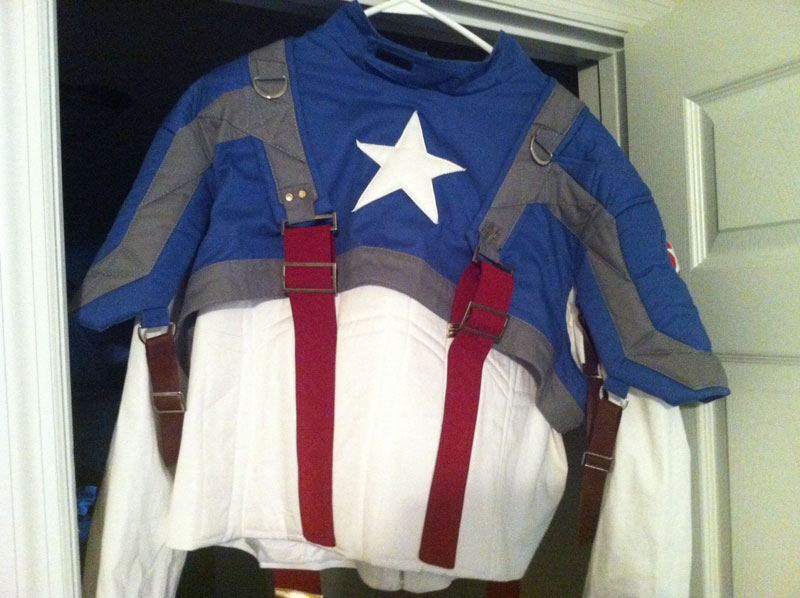 For the leather bits, I picked up a pair of WWII double ammo pouches, a 1912 holster, and some gloves from a local harley dealer, then hit them all with a coat of Melatonian Nu-Life spray (hat tip to Loganclaw22 for that tip). It stinks something awful, but that stuff is amazing - what was a bunch of different shades of brown (and in the pouches case, seriously beat up) all had an even color and looked brand new. 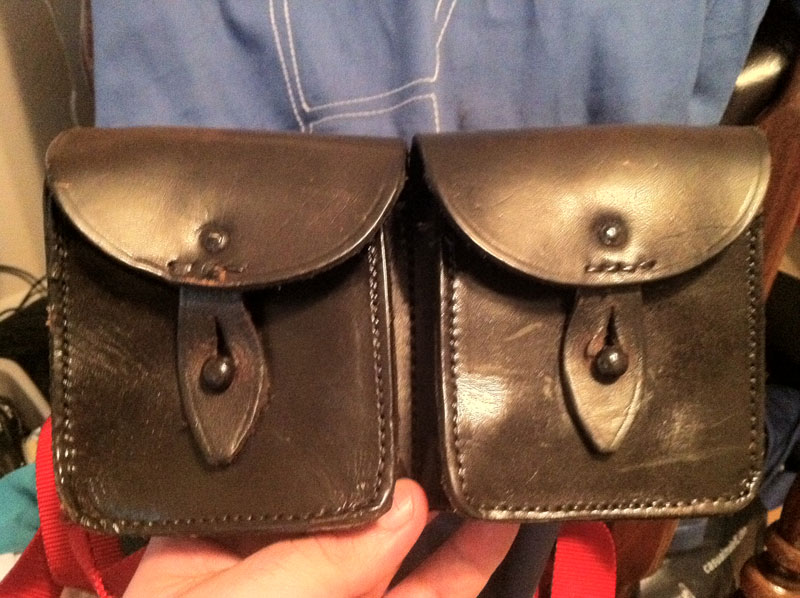 Then I tried the entire thing on and realized two things. First, there was no way the pants were going to stay up on their own with all this gear hanging on them even with a belt, as the suspenders aren't functional. Second, the costume was made out of a heavy fabric, then lined with satin. In just a few minutes I was pouring sweat, and knew I wouldn't make it through a night of partying in it as it's still pretty warm in Florida.

For the first problem, I bought some 1 1/4" red nylon webbing, the hardware to make a pair of bib overalls, and the heavy clips from a pair of LC-1 suspenders. That way, if they peak out from under the top it's not a bing deal. 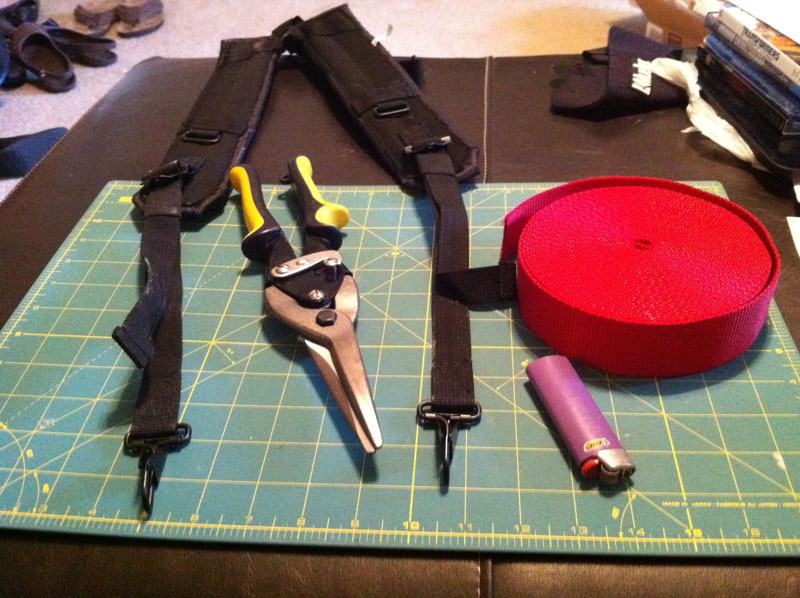 For the second problem, I simply decided to replace quilted shirt with a long-sleeved white one from under armor when I'm at parties and whatnot. That way I can actually enjoy the night, and if I wear it anywhere else I can always switch back to the heavy one. After dancing and drinking till 3am in it last night, I'm now certain this was the right decision Anyway this is how it looked: 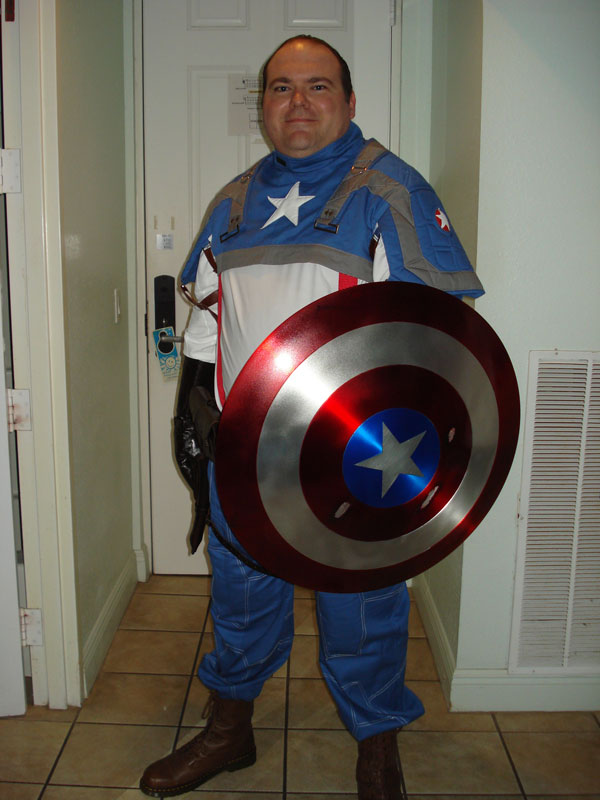 We forgot the camera in the room, so that's all there is for now

There's still a few things I'd like to fix (switch to a 3D chest star, finish the cowl, add the boot tops,etc), but honestly they're all pretty minor. We're heading out again next weekend, so hopefully I can finish the cowl, get some better pics and if it's cool enough wear the heavy shirt.

Good work on the helmet mod, as well as the paint job for the shield! The costume's minor mods shouldn't be that big of a deal.