As many of you know, I am in possession of an original MG81 booster/flash hider, used on the screen-used hero Han Solo blaster in Star Wars, Episode IV - "A New Hope."

In an effort to create the best and most accurate steel replica, I'm torn between two possible factory finishes: parkerizing and black oxide. Below are the best color images available of the hero part:

Since we can't trust the colors in these photos, we have to make a few assumptions. First, the original was not blued. You can see a dark blue hue in the Mauser in the top photo, but not in the suppressor. And in the greenish photo above, the suppressor is clearly a different color than the Mauser or scope, and perhaps also less reflective.

Here's an original M9 flash hider, identical to the one used on the Greedo Killer version of Han's blaster. It's parkerized. Looks here like a light shade of gray, but that's because of the flash. Below it is the found uber-rare MG81 booster/flash hider which is serving as the basis of my replica. Underneath the paint, which may be the original factory finish or could have been applied by a collector years after the end of WWII and since endlessly chipped and scratched, appears to be a gray-brown metallic surface, which may be the raw, slightly corroded steel or a parkerized surface, also discolored by minimal corrosion:

Here are other examples of parkerized weapons and accessories: 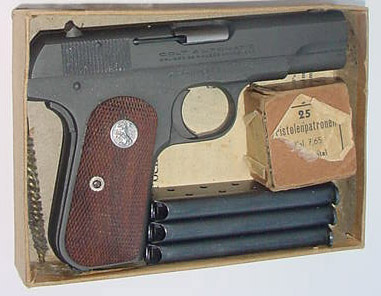 Aside from parkerizing, I've also considered black oxide, which would give the metal a uniform and clean black finish, like these parts:

If you'd be interested in a replica, which finish would you prefer? Feel free to post images of a finish you feel most closely approaches the screen-used part, or better images of the hero.

To be clear, I'm not starting interest list now, just soliciting opinions, so let's discuss this here - no PMs either, please.

RPF PREMIUM MEMBER
I like the parkerized finish on the handgun. If it came out that dark i'd be all for it. Id the greedo killer flash hider parkerized? If it is, that example is a little too light for me.
P

Originally posted by TFrosst@Nov 17 2005, 12:33 AM
I like the parkerized finish on the handgun.Â  If it came out that dark i'd be all for it.Â  Id the greedo killer flash hider parkerized?Â  If it is, that example is a little too light for me.

Oops, I forgot to mention that, so I edited the post. Thanks for pointing that out.

Here's the same flash hider, inches beneath a 60-Watt filament bulb, in an otherwise dark room:

Reciprocity failure can't be helped with no flash, so it's warmer in the photo than it actually looks: a velvety medium-dark gray with lots of lighter scuff marks.

I went to an army museum the other day just to look at a real Mauser. It was a deep satin black finish, not looking like iron as the blaster does in that side pic.
That makes me believe that the color and contrast of that side pic is quite weird.

As for the finish... I'm leaning to the black oxide look. The parkerized parts look too light to me, and the black oxide look of the parts in the bottom/ last photo of your post look darker to me. The grey look to the parkerized parts is too light. I believe with an oxidized flash hider, we could individually weather it and make it appear as it did in those above posted photos of the Solo ANH HERO.

Thanks for all the hard work.

I like the parkarized look, I used to have a Colt 1911 that was parkarized and it had a nice dark finish to it that I would call black.

Eitherway, we will be getting a really nice replica.

Though I like the look of the Oxidized one, I think the Parkerized is the way to go for this.

Blasters are not my particular area of interest, but I do collect firearms. I have several pieces from WWII.

IMO, the original flash-hider in the above photo is parkerized. The color of the parkerization varies depending on whether zinc or manganese (IIRC) was used in the process.

If it might help people make up their minds, I'll take some photos of the finish on my .303 British Enfield, for comparison purposes.
B

The finish is most likely not parkerized. Any real gun collector could tell you that the germans rarely had parkerized small arms, and the only parkerized guns they had were ones in which they captured, such as the belgian FN High-Power or Czech vz26 bren-type gun.
G

Originally posted by bwingpilot@Nov 17 2005, 01:30 PM
The finish is most likely not parkerized. Any real gun collector could tell you that the germans rarely had parkerized small arms, and the only parkerized guns they had were ones in which they captured, such as the belgian FN High-Power or Czech vz26 bren-type gun.

That's what I kept saying as well, but sources have said that the part was parkerized. To me, that just seems strange.

I tried to adjust the lighting to take out some of the green and return the gun to the dark blue.

Gabe, not sure if this helps...but, here's another close-up of the hider:

Gav: great color-correction, thanks. Could you please PM me with your e-mail address so I could send you my hi-res version of the file so you could correct it? I'd be very grateful.

Allan - thanks for the close-up. It certainly looks like somewhere between black and parkerized... This is going to be a tough decision.

Here's a comparison of my blasters - the real parkerized M9 hider on the GK (with a blued Weaver scope for contrast) and a painted MARK IV, both with Denix Mausers.

A few things to keep in mind:

Weathring a black-oxide finished replica suppressor would mean sanding or scraping the finish to expose the bare metal, or adding silver paint, ALCLAD, Rub-'N-Buff, etc., which might not look right.

If a parkerized replica is painted, the paint could be carefully distressed to reveal the gray finish underneath without exposing bare metal.

Oil-quenching is a third possible finish, perhaps a compromise between parkerizing and black oxide. When the steel is annealed, it is quenched in an oil bath instead of a water bath. This impregnates a layer of oil that is intended to wear away over time and slowly oxidize, manifesting as a yellow-tinged discoloration. Here are a couple of examples of oil-quenched parts: Thanks for all the input so far - keep it coming.

What type of oil would you use? Olive oil is good. Motor oil is a no-no. It would leave slag.

The prop part looks like steel perfectly and evenly oxidized to a dark grey color.

There have been different formulations of gun blue over the decades, perhaps this was something special that ages in the way that we see? I'd be hunting for a rare process used only by the Germans, or only in that period, for an explanation.

Come to think of it, don't a lot of old guns age from their original 19th century 'blue' to a similar grey color?

Here are some leads:

Sounds like a familiar conversation... I'd ask the vendor what they use, and would request pictures of quenched sample parts. I doubt they'd use motor oil - they specialize in industrial finishes.

Andres, thanks for the links - very informative.

Man, this isn't getting any easier...

First off I want in on this and I heard mention of a bull barrel and scope mount as well? Please fill me in.
Secondly, I will go with the finish that the more learned of you decide upon. I have an MGC Mauser hat I'm dying to make as accurate as possible.
Thirdly- Any suggestions on the HW Scope? Who has the best metal replica of this piece?
Thanks in Advance.
P

Oni, thanks for the interest. In order for this thread to stay on topic, I'll just say that down the road I'll seriously consider making accurized found parts, such as the scope, vertical mount, and bull barrel, but right now I'm focused strictly on the suppressor. I have access to the correct scope from at least 2 reliable sources on and off the RPF. No complete blaster conversion kits will ever be offered, in deference to MR's license and out of my healthy respect for LFL C&Ds

One thing I forgot to mention: I am recreating this as a FUNCTIONAL MG81 suppressor that will be usable by the MG collectors and shooters, hence the reason it will be machined from low carbon steel and not aluminum. The owner of the loaner part strongly advised that I add a "tell" to the replica, in order to prevent unscrupulous buyers from attempting to pass the replicas off as mint-condition originals, which could fetch a small fortune on the open market if they're misrepresented. In fact, for the original part, the owner had been previously offered as much as $1,200 (and that's BEFORE he was made aware of its use on the blaster prop). That's how rare this particular item is.

An exterior tell wouldn't matter to the MG crowd, but it will obviously matter to us, so I'd like to solicit suggestions as to what would be an acceptable tell. It can't be internal, because it might interfere with its intended function. So I came up with these three ideas:

1) laser-engrave the word "REPLICA" in tiny but permanent text on the smooth band, centered around the imaginary plane that also intersects the bottom vent hole.

2) add a keyhole notch to the bottom vent hole (not going all the way through, perhaps just below the knurl) that would be obscured by the socket-head cap screw after it's attached.

3) simply parkerize the part, since there's a consensus that the Germans did not apply this finish to MG parts during WWII. That would be sufficient visible evidence to warn any knowledgably collector of false claims.

Personally, I believe that the original was black oxide finished, if for no other reason than because the internal booster cone appears to be. See for yourself in the pics on my original showoff thread:

Does this change anybody's mind about the external finish? Please post your thoughts, because as far as I'm concerned, the debate isn't over until the parts actually come off the CNC lathe and I have to make a decision, in about 3-4 weeks from now.

Thanks for all the feedback, guys - I'm *THIS* close to green-lighting the run.

I for one would vote for the parkerized finish. I think that acrylic paints could be applied in minor washes to get a perfect effect.


EDIT: Seeing the black oxide leaves me with the question of whether or not it chips and cracks like paint?

Can the tell go inside the cone perhaps? That shouldn't affect either need.
P

Originally posted by JHVanOphem@Nov 18 2005, 06:40 PM
Can the tell go inside the cone perhaps? That shouldn't affect either need.

That's actually an excellent idea, thanks. :thumbsup I could put a slight step near the bottom of the cone where it's thicker.