RPF PREMIUM MEMBER
I'm starting this thread before I do any modification to this flash I just got because I'd like some input and opinions from you guys. So far this is untouched, all I did was remove the reflector and clamp mount bar. I got this flash because it has quite a few features of the standard lightsaber flashes like the clamp, input jacks, clear bubble, push button etc. In fact the top area layout is quite a lot like a graflex, though the details are all different. 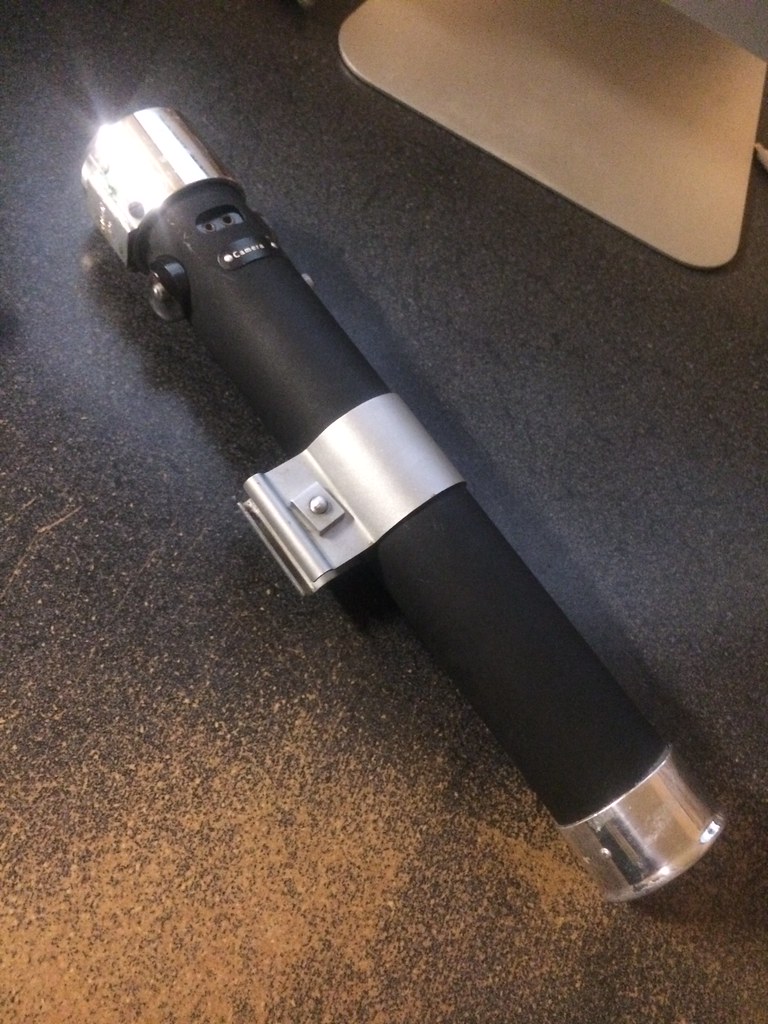 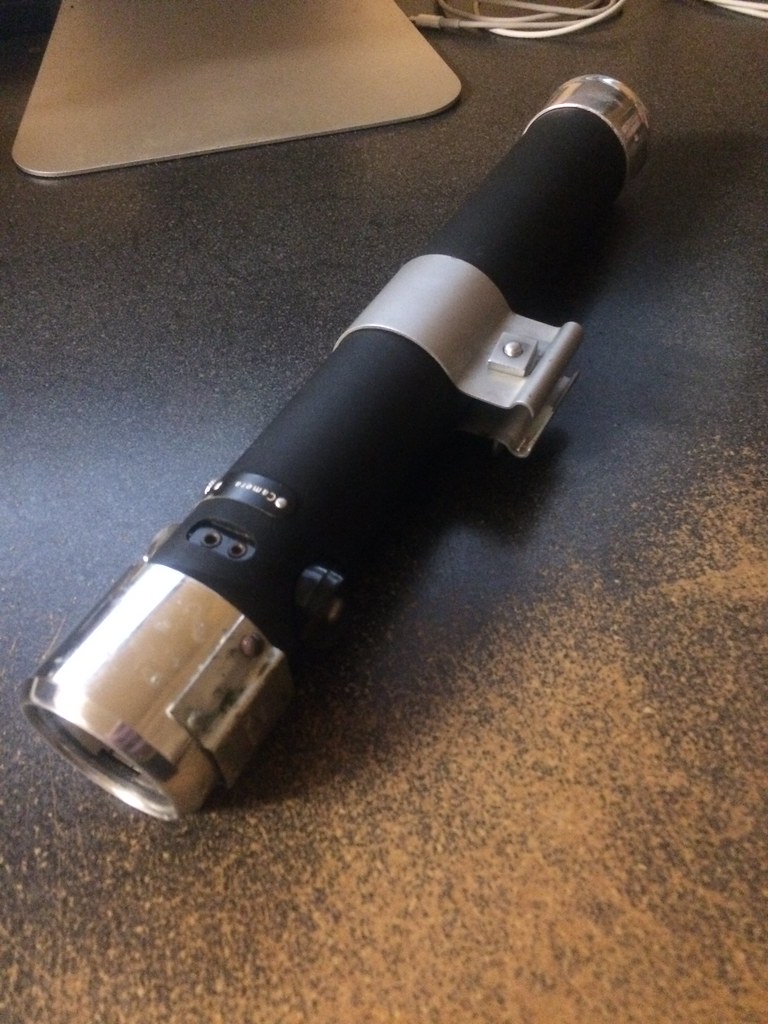 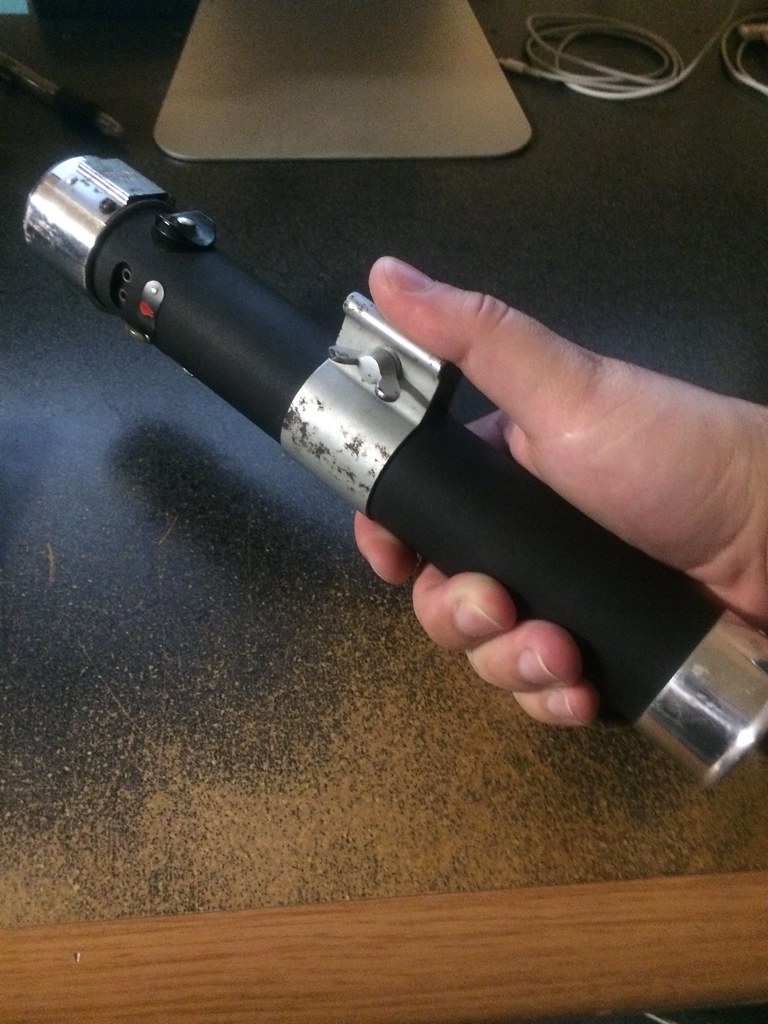 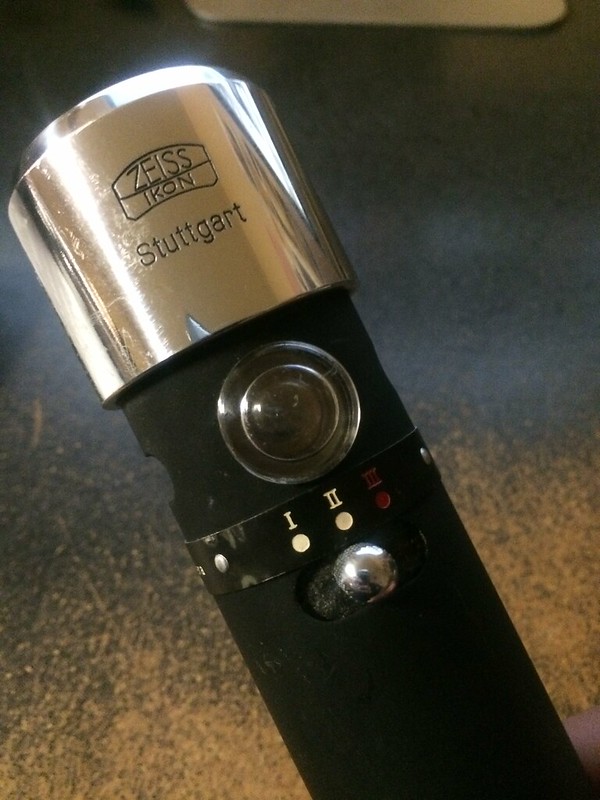 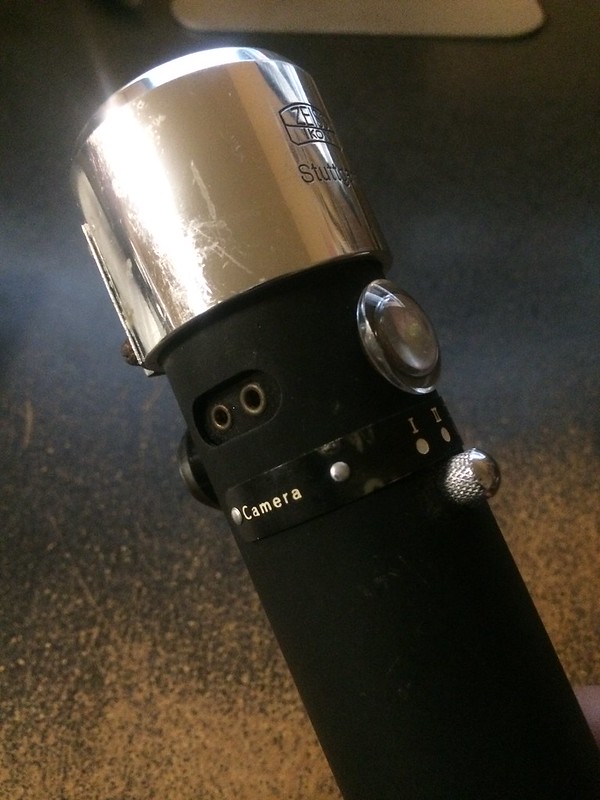 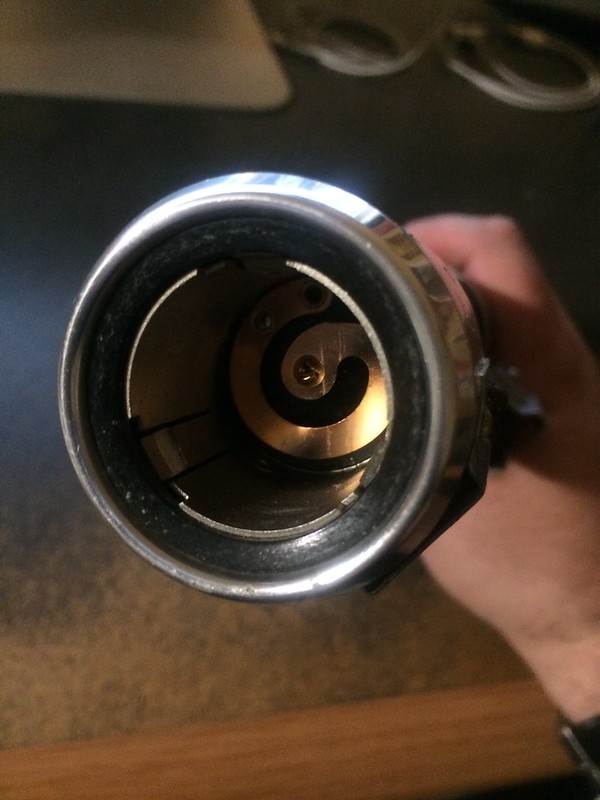 I'm going to try sticking to vintage parts and approach this as it would have been at the time, only using what was available in the late 70's. Here is what I have decided on doing so far as prep:

- Replace the clamp screw (that wing nut is just huge and ugly)
- Remove the riveted icon plate that says "camera"
- Cover the Stuttgart logo area with some foil tape.
- Install some style of D-ring on the bottom, it's flat so it should work fine.
- Probably use a circuit for the clamp "switch" instead of a bubble strip, its just too short and I don't think I could get a bubble strip to work without cutting bubbles in half.

So this is the point where I need some input:

- The emitter area is a little bland as is. The area where the reflector tabs in breaks it up a little, and it will look nicer one the foil tape is around the one side, but otherwise do you think it's fine as-is? I'm not sure if it is able to be removed yet.

- The entire thing is metal, but the main body is covered with something black, either anodized or baked on, I dont know. It has some texture but overall it's pretty smooth. I think I'll keep it, but might it be worth trying some oven cleaner to see if it will come off? I think it would be flat silver underneath, so I'll probably leave it. Also thought about scuffing it all up with some sandpaper so the control details stand out from the black a bit more. It's already going to have to a bit weathered since the clamp and emitter has some rust.

- Grips: This is where the above point causes issues. Since the entire body is black, I'm not sure what to do with grips. T-track is black, and I'm not sure how good that might look on this. I like the reversed colors, so maybe use some silver aluminum bracket type grips riveted on?

- The clamp has a quite sizable gap between the screw, since it's taller than most clamps. What would be good to fill this with? I think it would just look a bit odd left as open as it is once I have a circuit board in there.
Last edited: Jun 19, 2015

RPF PREMIUM MEMBER
This is SICK! Nice find! My first thought was silver t track, either painted or made from metal. I love the look of this flash, you're right up there with set decorators!

RPF PREMIUM MEMBER
I've seen metal t-track on on of the saber sites that weren't painted black... looked cool. I'll see if I can find

RPF PREMIUM MEMBER
Yeah I think Parks sells them black anodized, I'd have to ask if I could get them raw, but I'd rather not wait 4-5 months.

EDIT: case in point, he says they are out of stock thought they are listed as available on the site, go figure.

I think black grips might still look ok, I could scuff them up so they stand out a little.
Last edited: Jun 19, 2015

RPF PREMIUM MEMBER
That top photo almost look like a white baby saber blade has started to come out!

thd9791 said:
This is SICK! Nice find! My first thought was silver t track, either painted or made from metal. I love the look of this flash, you're right up there with set decorators!
Click to expand...

Just what I thought.[emoji6]
T-track or flat metal grips.

Nice flash. Never saw one before.

RPF PREMIUM MEMBER
Here are a few updates. Added rubber o-rings on either side of the clamp and replaced the wingnut with a unique license plate holder bolt. I played with covering the clamp with aluminum tape to cover that rust, but it just always looked like tape, that stuff pics up any tiny scratch and it just didnt look real. 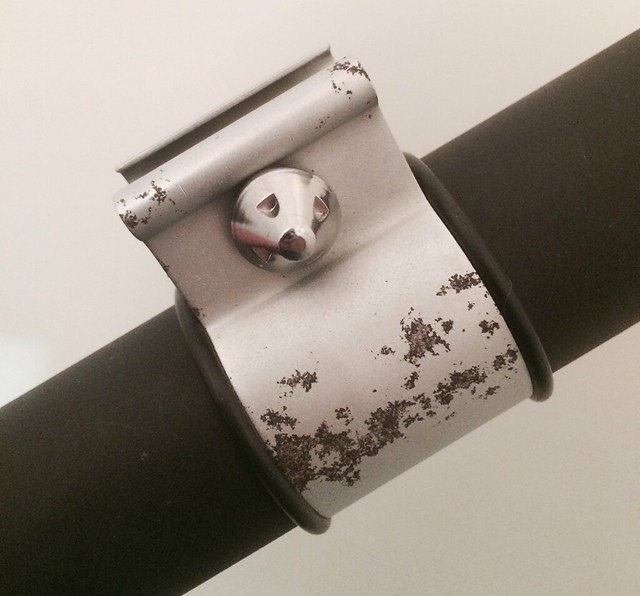 Removed the symbols plate but left the rivets that held it on, thought they looked cool. Covered the logo on the front of the emitter with aluminum tap. 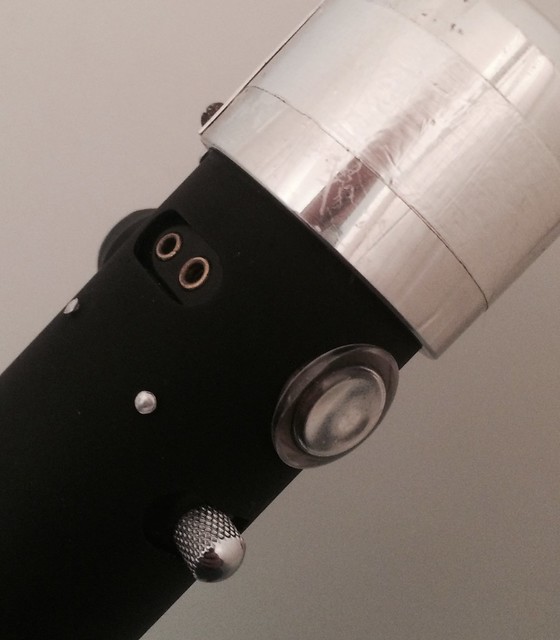 And finally ripped the reflector off of it's housing and connected it back into the top of the flash. I think I'll either round it (ala Yoda saber) or bend each side in a more angular way. Either way I thought it was what I needed to make the emitter area a little less plain, and it makes a nice emitter shroud. I tried removing the rusted screws to clean them and maybe rearrange some things, but they wouldnt budge. So overall this will be a slightly weathered design. 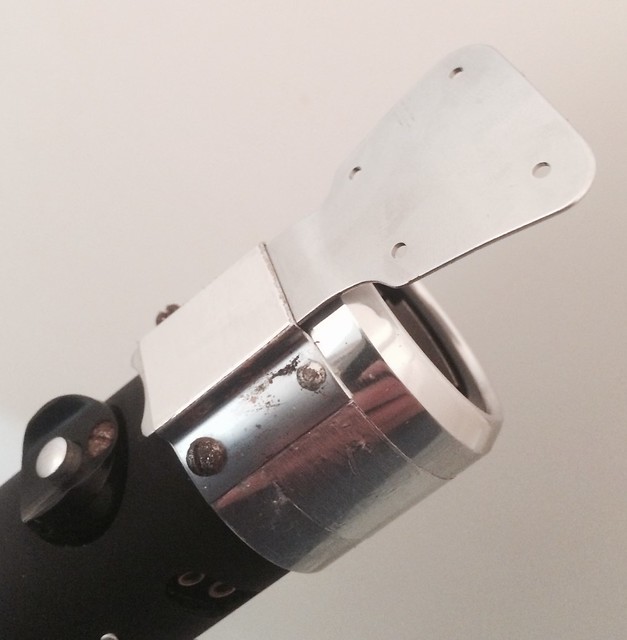 RPF PREMIUM MEMBER
Anyone have any tips to get rid of this rust remaining? Its a kind of sandblasted texture on the metal of the entire clamp, and Ive soaked it in vinegar/salt and scrubbed quite a bit of the rust off, so I'm not sure what, if anything I can do to get the rest off.

Try Coca-Cola ... it's quite aggressive against rust . . . I just question why you would like this lightsaber to look factory-fresh and clean . . . it goes against everything STAR WARS stands for ... yet I see it happen over and over again ... is this a guy-thing to have something always look prestine and brand new when working on it? :wacko

Yeah, that's natural weathering right there. I say leave it as is. Everything looks great. The design is Star Wars all the way! Better than the prequel sabers IMO.

RPF PREMIUM MEMBER
I have nothing against weathering, my favorite saber is my beat to hell Romans Obi!

The problem is that only the one side is rusted, other than a little near the top and the screws, it's pretty much clean. If i could rust the rest of it to match I would, but i think that would be even harder. The black body is some kind of weird coating over metal (its not just paint, i think its baked on) that I'm not sure how to weather. I'll probably just start whacking it or take some sandpaper to it and see what happens. Still waiting on my grips from Blastech.
Last edited: Jun 23, 2015

Please .. only use sandpaper as a last resort ... as for Blast-Tech I thought he's well out of business ... did you contact John before purchasing T-tracks online?

RPF PREMIUM MEMBER
Yup, I even got an email reply from him thanking me for the order. That was 2 weeks ago. If I dont get them I'm only out $10. I know lots of people make them.

And I meant the sandpaper for weathering, not taking off the rust.

RPF PREMIUM MEMBER
Decided to go full-on weathered. Banged and scratched it up a bit, it really helped bring some of those details out of the plain black body. Got the emitter shroud bent the way I wanted and I think it works. Scratched and scuffed up the opposite side of the clamp to the rust and replaced the plain hex nut with a covered hex nut, still not sure about that one. Added a red wire from a Gillette Supermax hairdryer into one side of the brass ports to harken a little to the ESB Vader design.

I still haven't found a suitable activation circuit board, the part of the clamp that on a graflex clamp goes tight around a board is much taller and rounded on this one, so I need something about 3 times as thick as one of those boards. And of course still need the grips and d-ring. 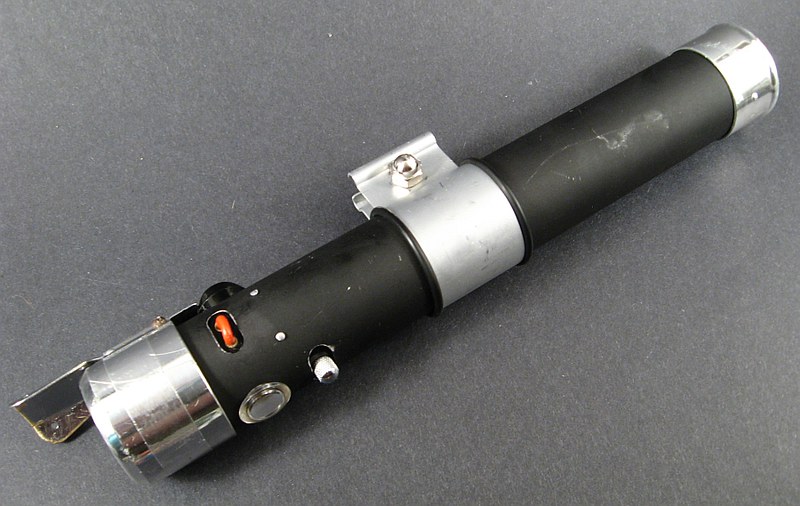 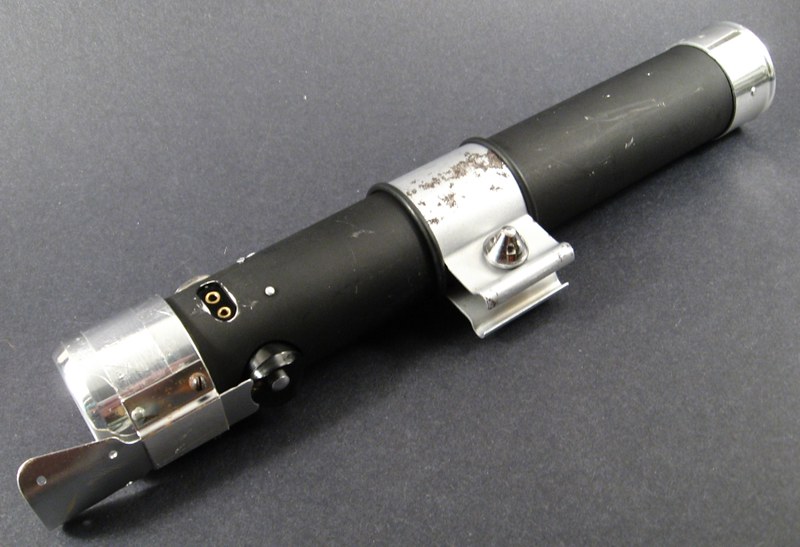 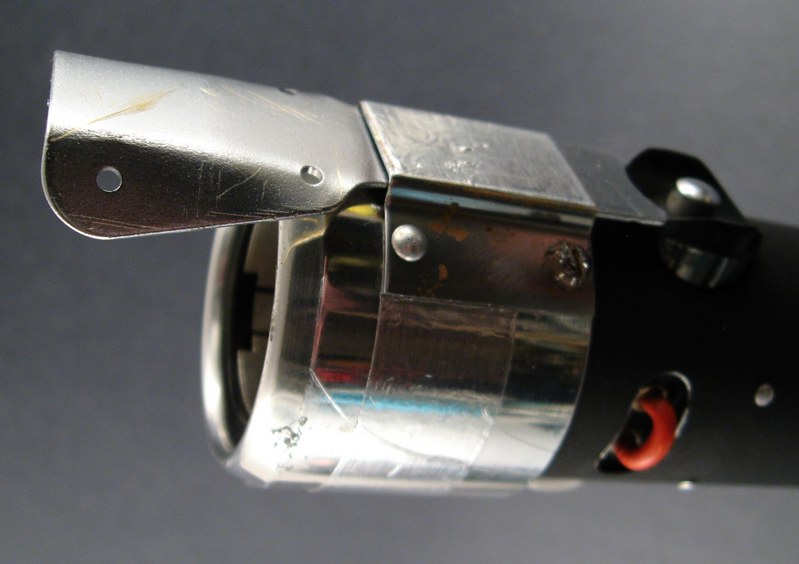 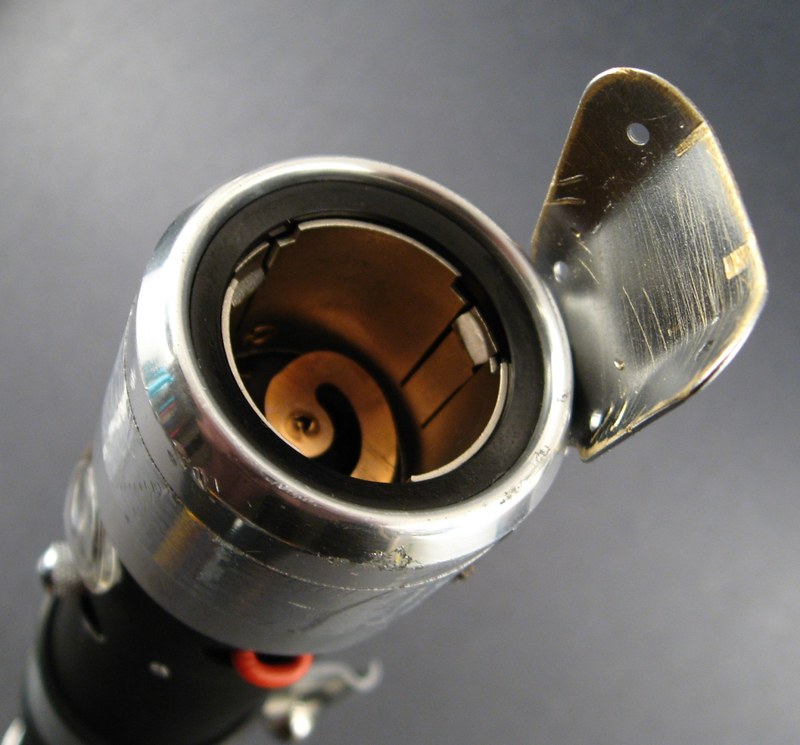 RPF PREMIUM MEMBER
Looks cool! Like what you did with the emitter.

I love where this is going! After briefly seeing one of Tom's older sabers in person, I've wanted to make one for my son (he's 4). He uses my resin droid caller and some hasbro sabers now, but he LOVES my DL44. Even at 4, he can appreciate authenticity. Subscribed!

Awesome saber. Looks great. I love the idea of using a traditional flash like they did in the movies for a custom. Truly looks the part.

RPF PREMIUM MEMBER
Thanks guys! I stayed up way too late last night working on the activation circuit. I had to sacrifice a 78 Magnvox Odyssey cartridge for it, but I think it looks pretty cool. I kinda wish the board material was a bit darker, right now the gold bits and the board are close to the same color and dont stand out much at certain angles, but I'll probably leave it as is. I had to stick a few layers of sheet foam under it for the clamp to get a tight enough grip on it. 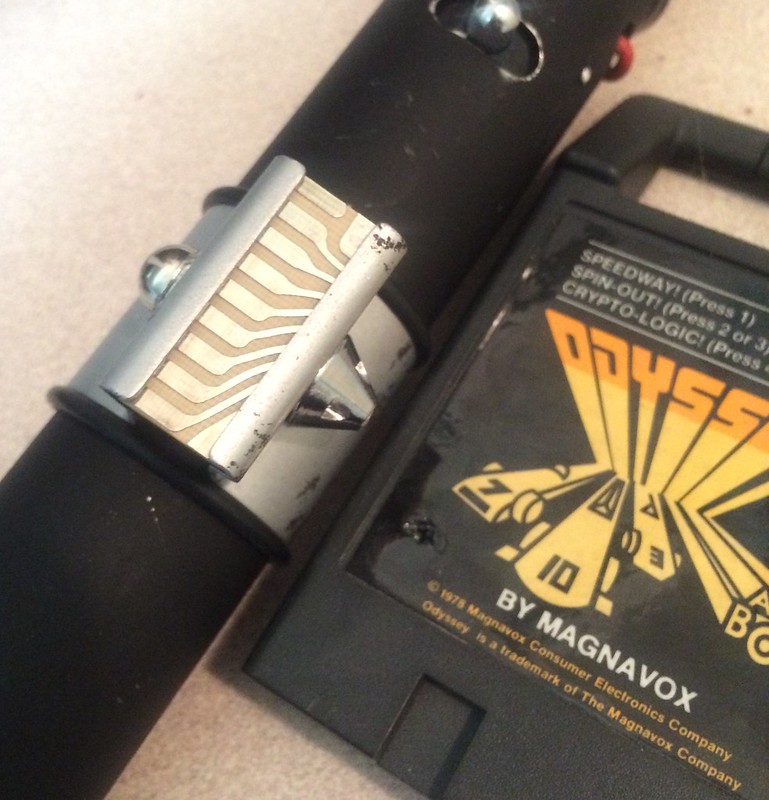 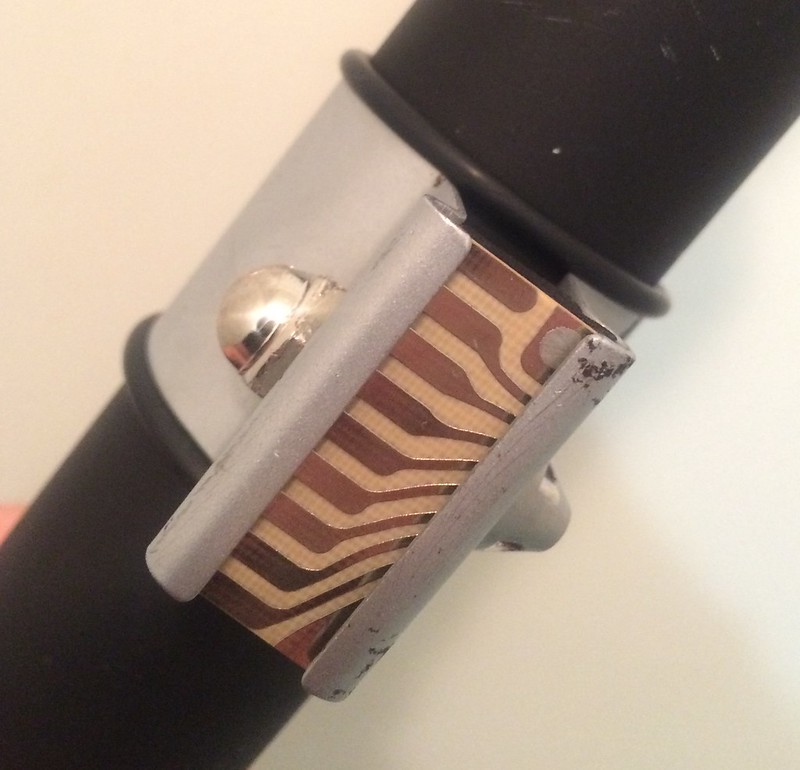 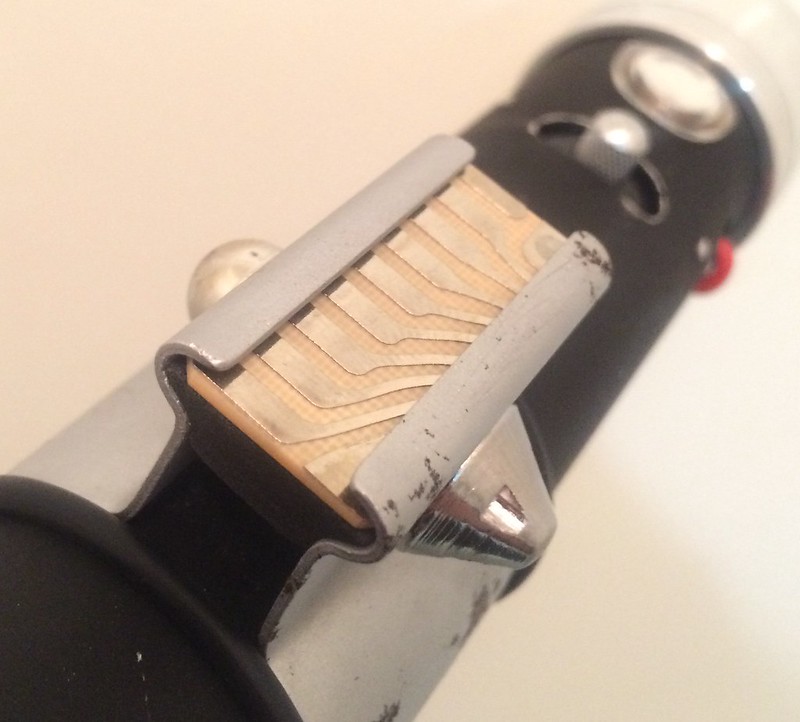 Love the board. maybe just a brush & rub of a green or brown acrylic paint might help it stand out more. Or paint the back of it?

Perhaps you could give it a quick wash with some thin black paint or airbrush ink and then whipe it clean so that it only remains on the sides of the gold 'fingers'?

Today at 8:23 AM
kristen jones

Yet ANOTHER Macrobinoculars Build on a Budget
2 3 4