Halliwax said:
I’m now starting to believe the blank cast is a recast.. hear me out

The casted then wood buck with pommel

Can’t get it to fit in the lathe

Lathed down there cast blanks pommel

Idk I’m just sitting down and having dinner now been a long day
Click to expand...

Forget everything I just said, it now looks turned down to me

I’m shutting my mouth and going to bed, I lost my mind..

steven giunta said:
That round spot looks to be a hole,My guess is either a peg to keep it from moving when doing the mold or a peg they would use as a pour spout.
Click to expand...

Definitely a hole. Not big enough for a pour gate. Friction would keep it put while moulding so no use for that. If it was present at the time I can only think is was for a bit of dowel to be inserted to remove from it from the mould sand. Screws are better for that job though. It's bare wood so was made after painting. Could be made much later for a display stand? It's gonna be another one those things we're probably never going to know.

I was definitely wrong, that's a hole and not glue! I find it pretty cool that these are just hanging out in his guest room, and that he was willing to share it online.

Anyhow, I came across some more pictures of these sabers (quite high resolution - 6K!) thanks to user Mac Spud on Flickr. There's also a bunch of pictures from the 2019 auction including the Elstree Saber and the same TIE Fighter in Mr. Lopez's video.

Wood grain lines up from booster to pommel so pommel is not likely to be a separate piece as I speculated earlier. That particular casting has vice marks in the clamp area.

LOM said:
I was definitely wrong, that's a hole and not glue! I find it pretty cool that these are just hanging out in his guest room, and that he was willing to share it online.

Anyhow, I came across some more pictures of these sabers (quite high resolution - 6K!) thanks to user Mac Spud on Flickr. There's also a bunch of pictures from the 2019 auction including the Elstree Saber and the same TIE Fighter in Mr. Lopez's video.

That's some crisp detail on the aluminium hilt, you guys sure it wasn't a two piece plaster mold?

Gerard2567 said:
That's some crisp detail on the aluminium hilt, you guys sure it wasn't a two piece plaster mold?
Click to expand...

Gerard2567 said:
That's some crisp detail on the aluminium hilt, you guys sure it wasn't a two piece plaster mold?
Click to expand...

Looking at those high res photos in the above thread the wood grain on the wooden 'pattern' follows through in register onto the pommel which is good indication that the pommel is one piece with the body so that pattern wasn't the one used to create that casting. So, no we don't know 100% for sure if that casting was made from a one or two piece pattern. We are sure it was cast in a greensand mould. Tells from along the seam line & the general surface texture are unequivocal. Have a look at PoopaPapaPalps thread if you haven't seen it yet :

EDIT 8/15/18: Considering I've gone quite deep into the rabbit hole since posting this thread, and learning quite a lot along the way, I'd thought I'd update this but keep the original posts for posterity sake. EDIT 5/15/2020: Go to Post #111 for the latest, and currently best version, stunt...

RPF PREMIUM MEMBER
It would appear this wooden buck has another groove at the base of the grenade section, before the body area meant for the graflex clamp. Does that show up on anything else?

thd, I haven't seen that groove show up on anything which is quite odd now that I think about it

I think I've been staring at this thing for too long - but Mouse Vader I think you are correct about the pommel being separate... See here: 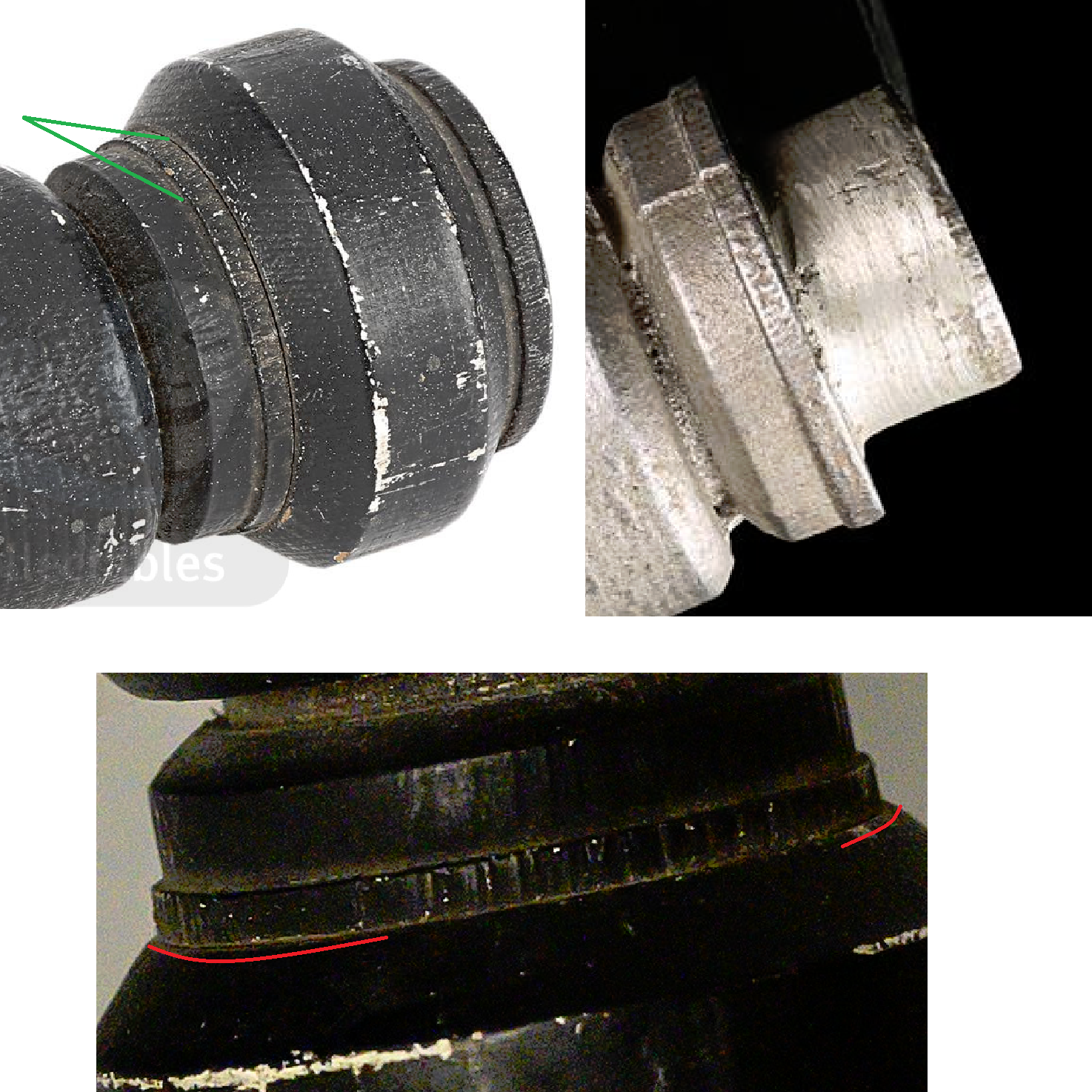 The green lines shows 2 types of internal corners, the leftmost one has that rounded groove that a once piece lathed item has, but the second spot (where the casting lines up too) has a pretty distinctive line that does not have that same rounded edge to it.

Also on this 6k image, I grabbed a snip of the pommel here. The red shows 2 spots where I see the pommel coming off the body, right at the same spot on the cast blank. And the grove right above it (first green line) does not show any indication of that kind of crack

This could mean for these castings, they did it in such a way that the cast blank could be mounted, then created this 'slip-on' pommel they could cast again and use on the body because we know the pommel extends does extend further into the body.

(I'm half asleep right now.. so I hope someone sees this too)
G

That explains the wonkiness...

thd9791 said:
It would appear this wooden buck has another groove at the base of the grenade section, before the body area meant for the graflex clamp. Does that show up on anything else?
Click to expand...

It matches the Obi-Wan saber it was patterned from in that respect.

Ok Someone had to fingerprint this thing - muggins again . Bare in mind I've had to scale & rotate one image to fit another. These fortunately were similar angles to start with so not by huge amounts. Levels & contrast also altered for better definition. Also disregard my post #68. I could follow the grain from the body to the pommel but only onto the part that's present on both. LOM I see that area & it does look suspiciously crisp. I'd expect some small radius here if only from the paint. 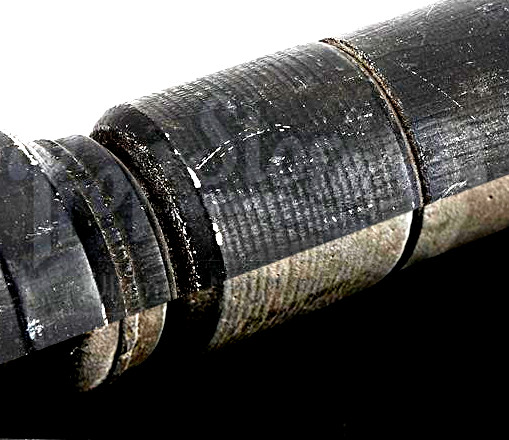 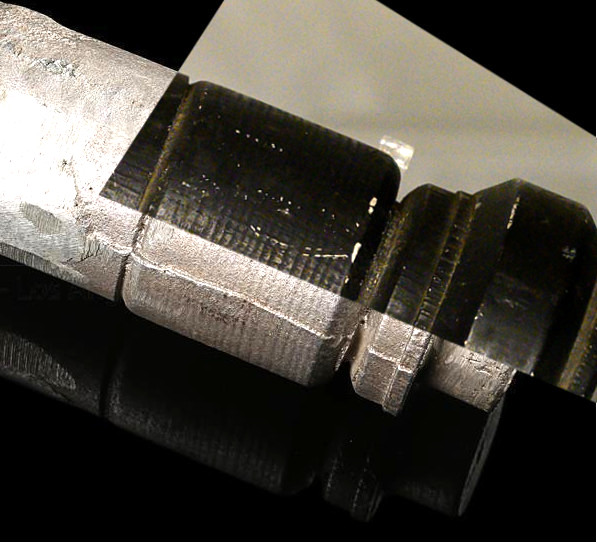 Now all we need to do is get someone to persuade Gus to give that pommel a good twist...
Last edited: Apr 15, 2020

Mouse Vader said:
PPP - Myfordboy uses sodium carbonate (washing soda) in a small foil wrap pushed to the bottom of the crucible as a degassing agent & casts at 650 deg C. Does not recommend drinks cans, food containers etc as scrap for casting. Uses ally that is from cast products. There's lots of useful stuff to on his castings video playlist.

Yep, watched a number of videos and then some to compare it with other "counter" videos that follow his method and cry foul. I already have the sodium carbonate and switched to only using Al stock to melt down. Will be trying this when the new buck comes in.

I did try to get a UK supplier to ship the proper degassing pucks over but it was a no-go.

RPF PREMIUM MEMBER
I love his videos. And he makes it look so simple and straightforward.

One day, I'll get around to setting up a forge and such, to do my own castings.

Having proved myself wrong I found another video using oddside moulding. The info right at the start I think explains what I wanted & is the same as Myfordboy's in that a prelimary half is made to give the parting line to the next half but if more than one mould is required that oddside is retained to start subsequent moulds. This tells us, I think, that they wanted a few casts but not many. That is, they would save time over machining, but doing a 2 piece pattern or pattern board would not justify the extra time to make them. A plaster oddside is also not out of the question.

Just for useful ref. this guy does a rather long winded couple of videos on making a cylindrical 2 piece pattern if ever anyone needs such. ( Why he didn't just turn in the fillets when machining instead faffing about with leather later I don't know.)

It's reversible. With two sided tape. Easy to take them off.

My C3PO / Protocol building adventures (and other props)