I have started making Widowmaker Noir skin from overwatch! So far it is going really well. Here is the progress so far!

Belt, bags, and grenades I made out of real leather, vinyl that looks like leather, foam, soda cans, and worbla. I used an automotive spray filler that I picked up on home depot on the worbla to make it super smooth and shiny. I was really happy with the result and can't wait to try it again on some bigger pieces. One thing I did notice was the worbla needs to be crafted perfect or flaws will stand out when it is so smooth. This part of the costume was actually very time consuming. My leatherworking is very basic as I don't much experience in that department.

Here is the corset progress so far. This is only my third corset I have ever made and I am extremely happy with the result! This one turned out much better than my previous corsets. I added a zipper to the front to make it easier to get in to. I did lace it in the back which is different from the character design. I still need to add the black stripes on the side.

Next is the rifle. I am posting this here since it is part of the costume. I may make a thread in replica props in the future if I want to go more in detail about the construction.
I ordered a fancy high density EVA foam for this beast because I wanted a very smooth final product that required less sanding. I am really happy with the foam. I started by creating a blueprint off the original blizzard design in adobe illustrator and photoshop. I then had the image printed at FedEx to scale. I printed the blueprint and a simple version for the wood core. I then transferred the outline to wood and used a band saw to cut it out.

Here is the final progress I have at this time. I used my blueprint to cut out the different parts. I used three different thickness of foam for the different pieces. I need to go in and dremmel some of the pieces to round it off a bit. I have not glued anything down because I need to map out where the LEDs are going to go. This has been one big puzzle but I am satisfied so far!

Nice job so far. Love how you're building the rifle.

Looks awesome, Ill be following this build for sure. My niece wants to do this or Tracer.

I feel like the sanding will never end! Over the last few days I have been sanding, applying layers of wood filler, and sanding some more. I am not entirely happy with the wood filler I used. It was extremely toxic and consisted of a two part mixture with a really short working time before it hardened. I also had some trouble with it flaking. In addition, I used my dremel and sand paper to shape various pieces. Widowmaker's rifle is nearing the painting stage. So far it is turning out really nice. The rifle consists of over 50 individual pieces. I have also incorporated some LEDs into the construction as well. 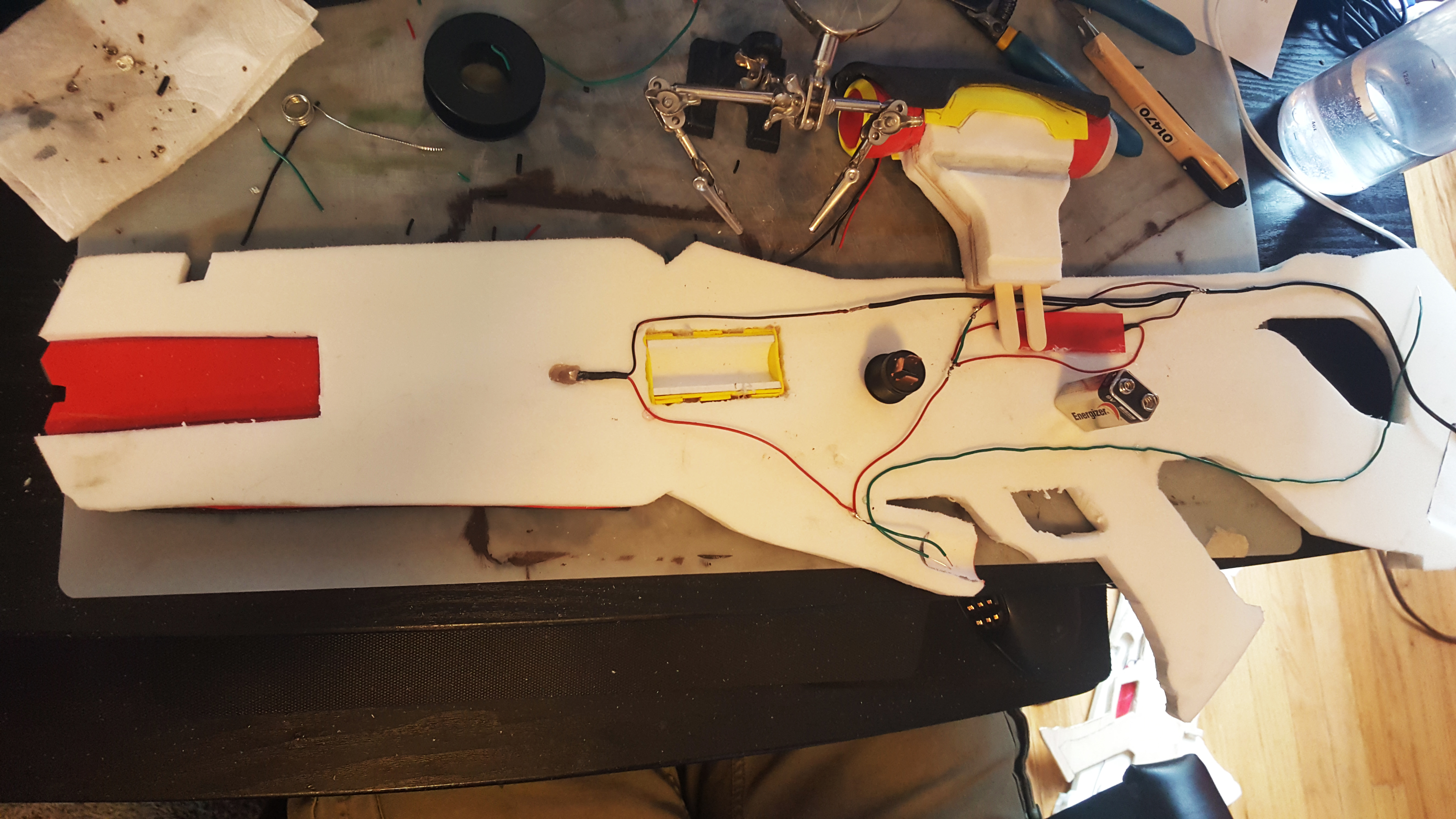 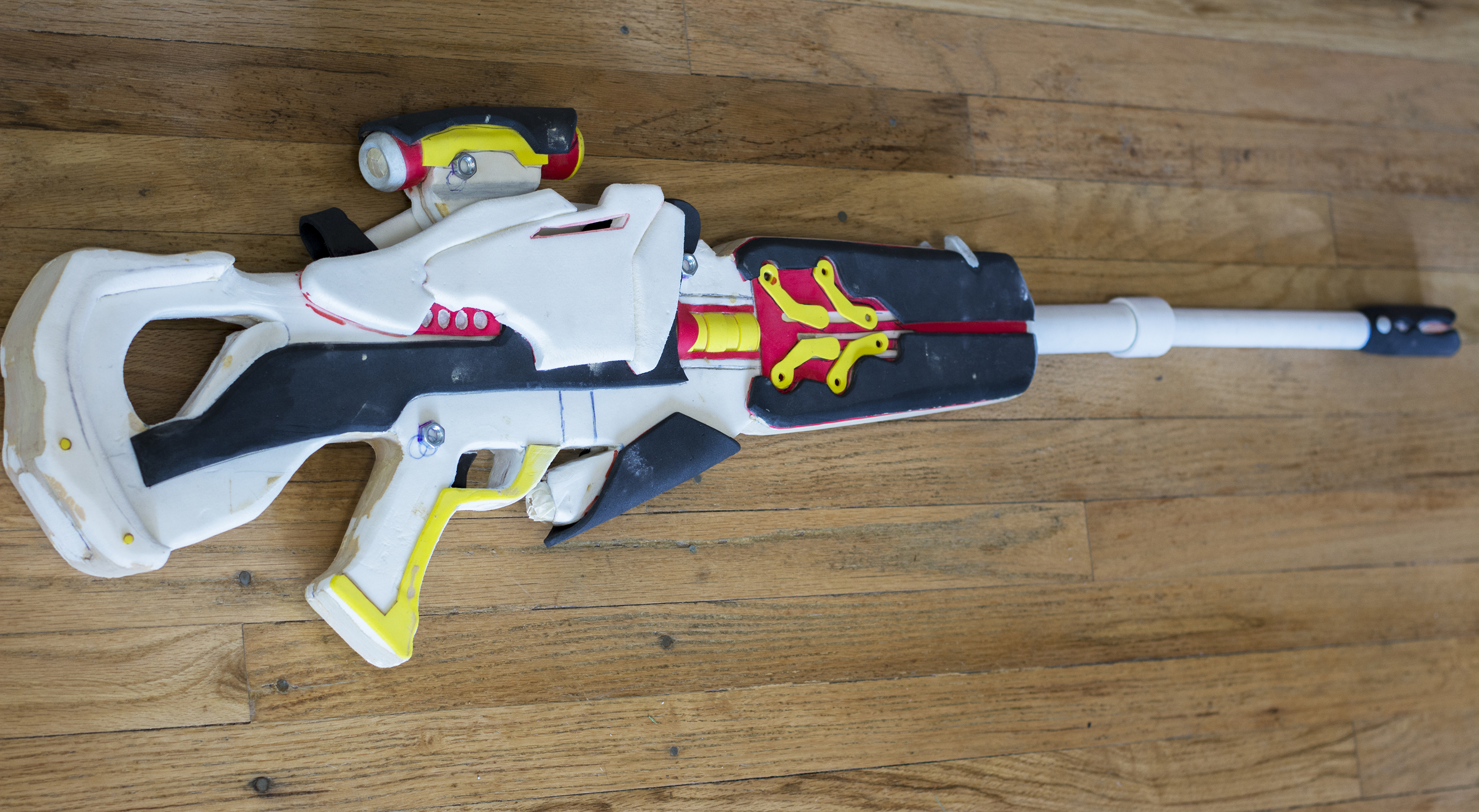 RPF PREMIUM MEMBER
It looks great! I feel for you with regards to the sanding - the devil is in the details.

Here is an image to show the size. It feels like it is huge however I was very meticulous in my measurements so I know it is close to correct. I am happy with how it turned. There are a few cosmetic flaws but overall I think I have done a good job especially for my first gun build and using a different technique.

And finally with a proper pain job! Need to go into overdrive to finish the rest of the costume in less than a week! 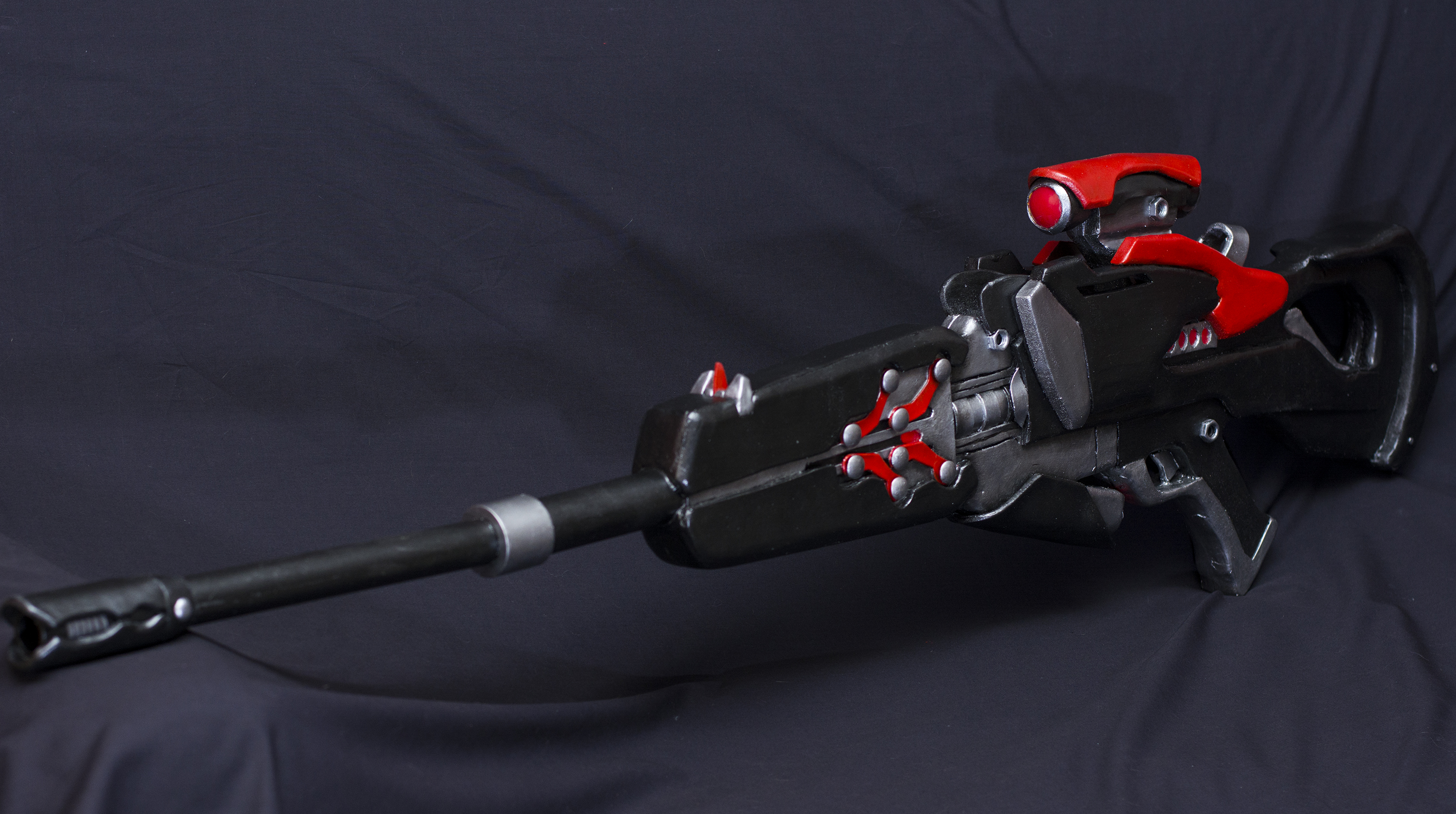 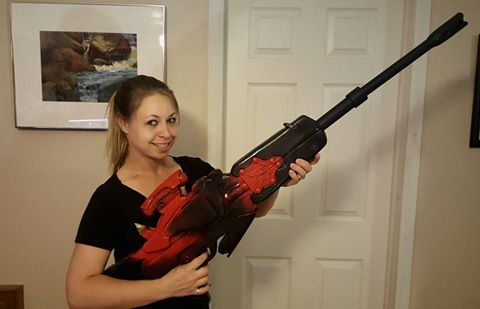 That gun is epic, nice work

Magnifique! Subbed. Are you planning on making the headdress open or closed? looking foreword to seeing this finished-Rnc

Magnifique! Subbed. Are you planning on making the headdress open or closed? looking foreword to seeing this finished-Rnc

I ended up finishing this in a rush and did not take progress photos (so bad!).
I had to finish this in a week so panic mode ensued which resulted in me not taking any progress photos! Instead I have some photos of the pieces.

Being in such a rush meant that I wasn't able to plan out my electronics as well but they still turned out nice. For the head piece I hid the wires, battery, and switch in the largest part in the front. I then covered them with black foam and attached some Velcro so I could easily replace the battery when needed. I diffused the LEDs with a little hot glue and the glow turned out nice. In total I used two LEDs per triangle area. I have had a lot of questions about how I made it. I am kicking myself for not taking pictures. I actually studied the headpiece and broke it down piece by piece. I made patterns for everything with paper then transferred them to foam. I used just craft foam for the majority and thicker EVA for the other pieces. I covered everything with worbla and sculpted the fang things with worbla as well. I then used the same automotive sandable filler primer to make it smooth. I attached it on one side with Velcro and a clip. I didn't actually end up needing the clip as the Velcro worked just fine. I had some problems the first day I wore this due to sweat. It was so hot in the costume that I was sweating buckets. I originally padded the inside with craft foam which resulted in it sliding down constantly because it was not absorbent. I ended up putting two layers of felt on the inside on top of the foam and it worked really well and the sliding problem was fixed for the next day. The only problem with the felt is it is quite scratchy and irritated my head after being in costume all day. I only used felt because it was what I had handy at the time.

The shin and feet armor was easy to construct. I just patterned each piece on my leg with plastic wrap and tape. I used knee high boots underneath. I fastened it with Velcro and elastic. I did encounter a problem with the back. There were some spiky parts that fell off after the first day and ended up being destroyed. They would have been more successful had I used a thicker piece of worbla. The shoulder piece was secured with elastic and caused me no problems.

The wrist piece was one of the last pieces to be constructed. I had a hard time patterning this one but it looks nice in the end. I hid the battery in the part that sicks up which worked well. I connected all the LEDs to the one battery through the inside. I also connected the top and bottom with elastic and was able to just slide my arm through with a comfortable snug fit. I used transparent worbla for the tubes and spray painted over them. I need a better method of painting as I did have a problem with chipping.

Additionally I did create the tubes for the head piece however it was too heavy and I ran out of time to figure out how to secure it. I ended up ordering a wig on amazon which looked good.

Again, sorry for the lack of progress photos! hopefully the explanations are clear.

Here are a few photos taken in my photo studio of everything together!

What were you using for the hair "tubes"? Been trying to plan some stuff in my head for this build and came across some foam tubes that I thought would work.
J

Tessa Cosplay said:
Here is an image to show the size. It feels like it is huge however I was very meticulous in my measurements so I know it is close to correct. I am happy with how it turned. There are a few cosmetic flaws but overall I think I have done a good job especially for my first gun build and using a different technique.


You're fine. It's a sniper rifle. They are bigger than "normal" weapons.
Click to expand...