Awesome to meet you all I'm Beth; I've been lurking on here regularly for good few weeks now but finally bit the bullet and joined a couple of days ago. I've been costuming on-and-off for about a decade now (mostly Star Wars), but I haven't had time to build anything at all for the last couple of years because my workload was just too damn high!

Anyway, I've started working on Rinzler as a way of getting back into the prop-building world. The costume designs in TRON were just beautiful, and I wanted to try my hand at building my fave baddie on the Grid :cool At this point I don't have a huge amount of progress to show (I'm still juggling a PhD and a part-time job!), but I'll share any progress on here over the next few weeks. I'd love to soak up some advice from the experts!

I've started with the identity discs. I'm a few years too late to the TRON party - when I looked around initially for official merch to mod, I quickly found out that there's not much in production any more, and if you want an identity disc toy to use as a base you can expect to pay big bucks! So, having originally come from a Halo costuming background, I thought I'd go for the classic pep → resin → bondo approach. But then I realised...THE FUTURE IS NOW! My department has a 3D printer, so my friend and I gave it the new and exciting task of printing two halves of an identity disc (model: https://www.thingiverse.com/thing:2259641), which completely eradicated the entire cardstock-warping issue and negated the need for nasty sticky fibreglass (this was an absolute revelation for me, lol...last time I built a prop, 3D printing was waaaaay too far out of my reach)! I'm now in the process of bondo-ing the surfaces and sanding them by hand, which I'm hoping to finish in the next few days so I can put the detailing in with the dremel, then prime and paint. I still gotta print two more halves so I can make his second disc, but I thought it would be easier to make just one initially and use that to figure out the electronics (I'm thinking of using Adafruit NeoPixel LED strips, or something similar, as I figure that'll be brighter than EL wire / EL tape).

Here are the two 3D-printed halves:

And here's some initial bondo work on one of them (plenty more work to do!):

For the suit, I'm thinking of using a thin wetsuit as a base (has anyone had any luck with that, or was it just way too hot)? In an ideal world I'd really like to sculpt and cast the exosuit, but I'm not sure if that's feasible yet. I may end up starting basic (probably using neoprene pieces to build up the exosuit) and then maybe in the future I can work on sculpting/making some molds.

I've also put in an order for one of Crimson490's gorgeous Rinzler helmets! I'm so, so excited about it - thanks again, man!

Anyway, I'll keep this thread updated as much as I can 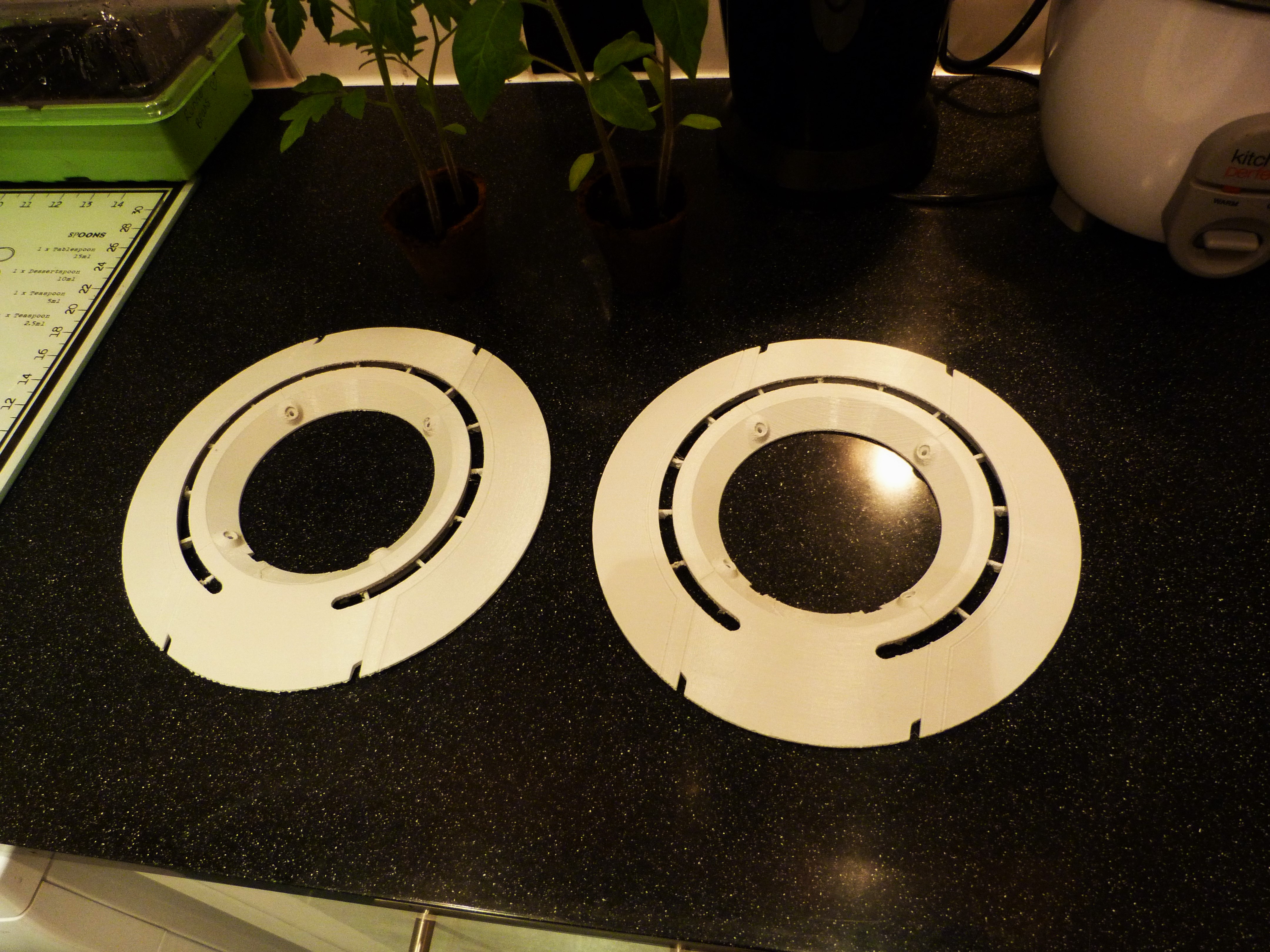 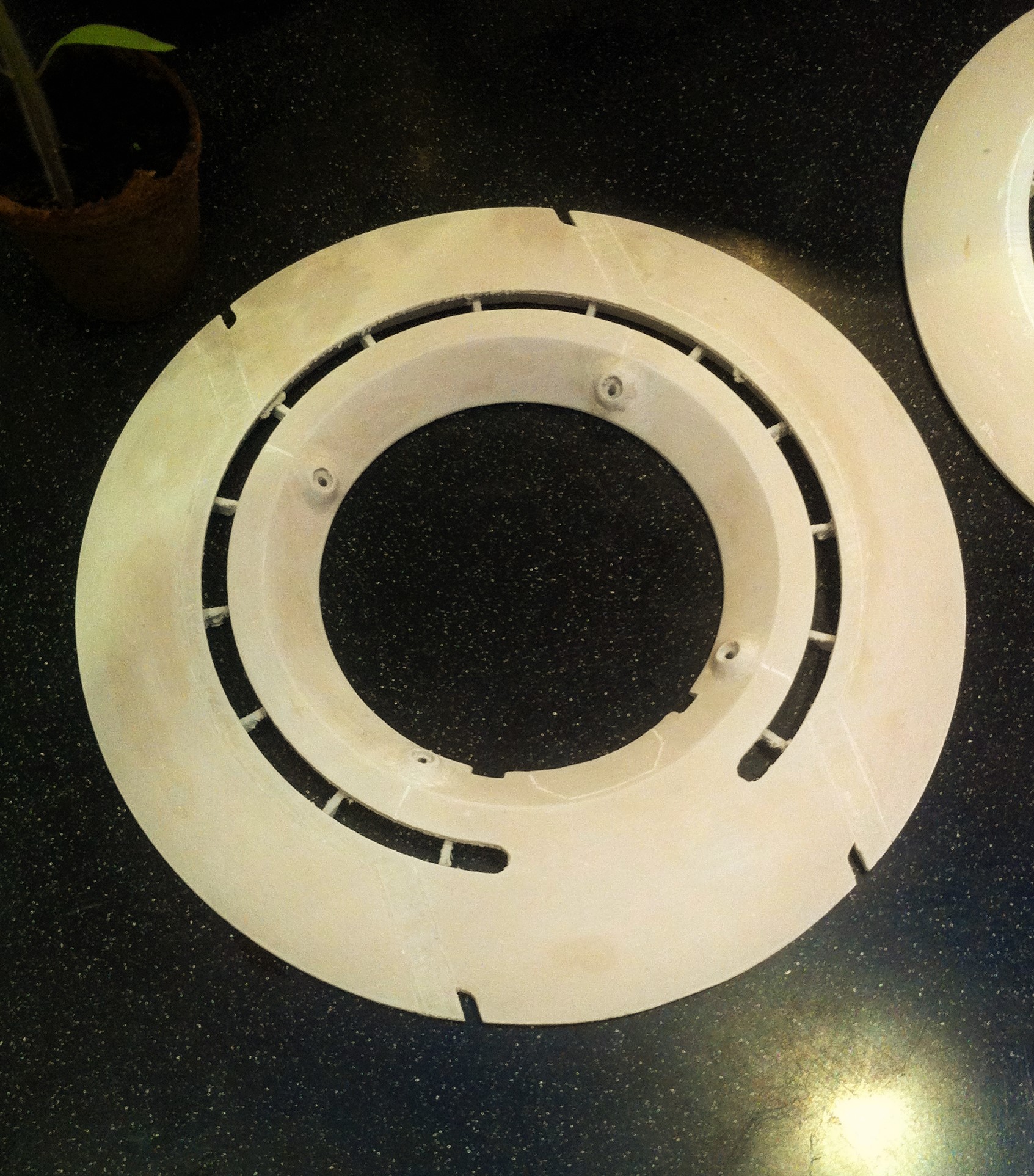 RPF PREMIUM MEMBER
Welcome to the RPF, and keep us posted on your progress! Unfortunately, the 'buzz' for Tron here has waned over the years (thanks a lot Disney!), but there are still a few of us diehard programs on this forum that have lots of love for the franchise and will enjoy your updates. Good luck!

RPF PREMIUM MEMBER
Yes, keep it up! I am wanting to do a Rinzler costume myself in the next couple of years and can't wait to see your progress!

RPF PREMIUM MEMBER
Greeting, Program! Welcome to the RPF grid. Crimson420's Rinzler helmet is outstanding, I can say as a proud owner of one myself. Looking forward to seeing your progress on this project.