I though I'd share about my Tron Legacy Identity disc build. The project waited a couple of years before getting started. Hitting december, I decided that all that backlog had to go somewhere, so I tackled the build right after christmas...

Primer WIP. Trying to get rid of all the copyright marks and ugly text. Leaving the sound vents and former on/off switch for the micro USB access. On the latter can be read E O l. I left those as it reads as end of line and I found it cool. 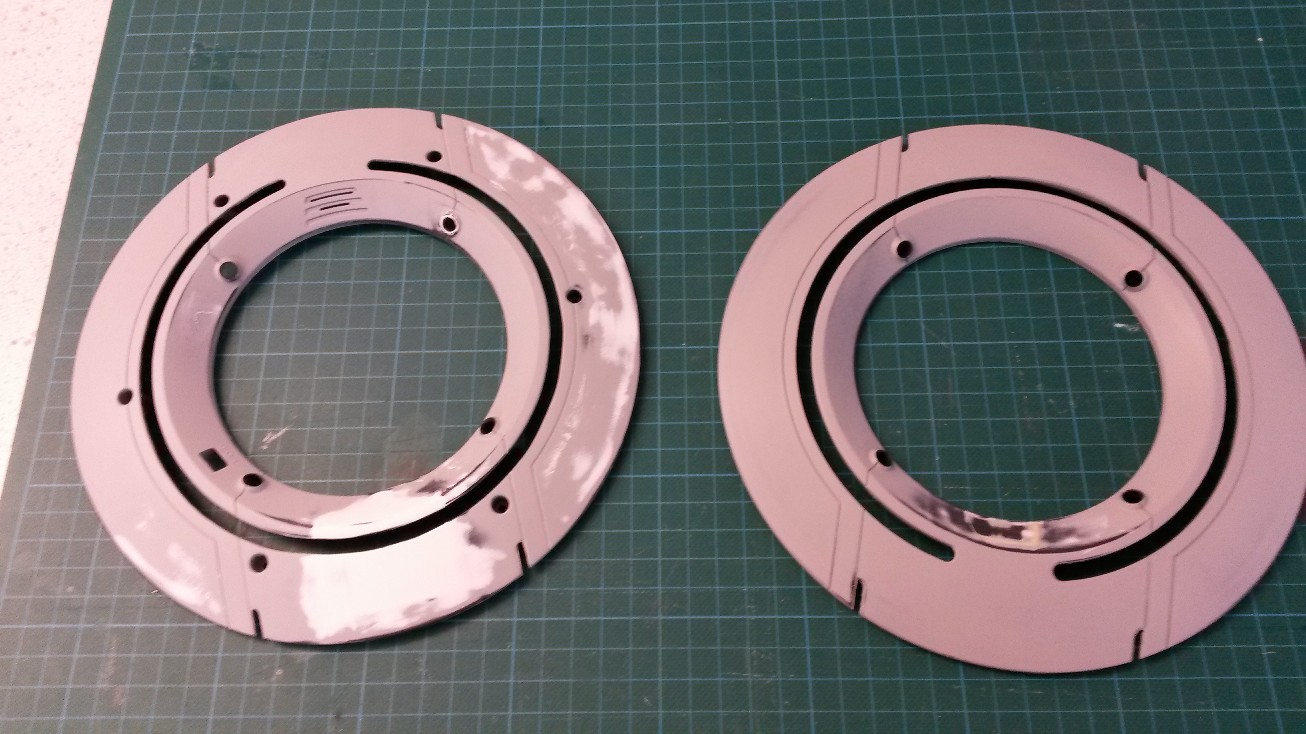 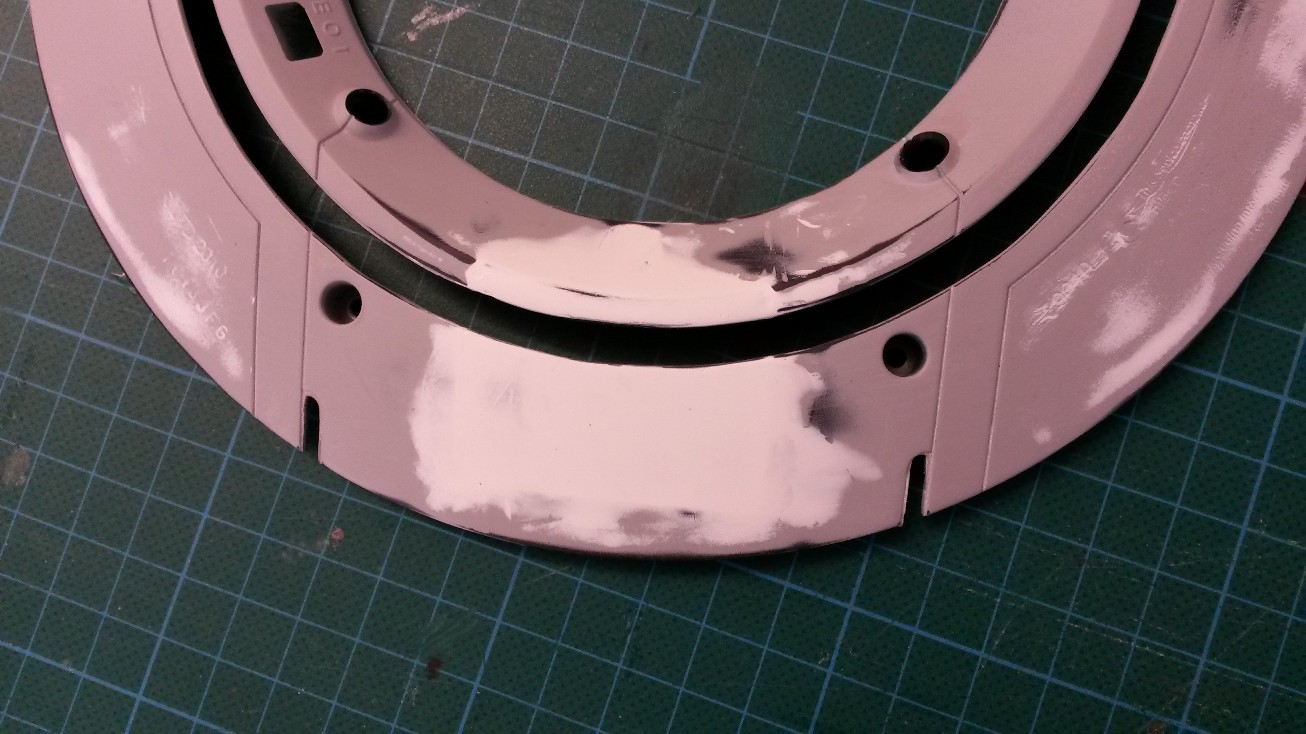 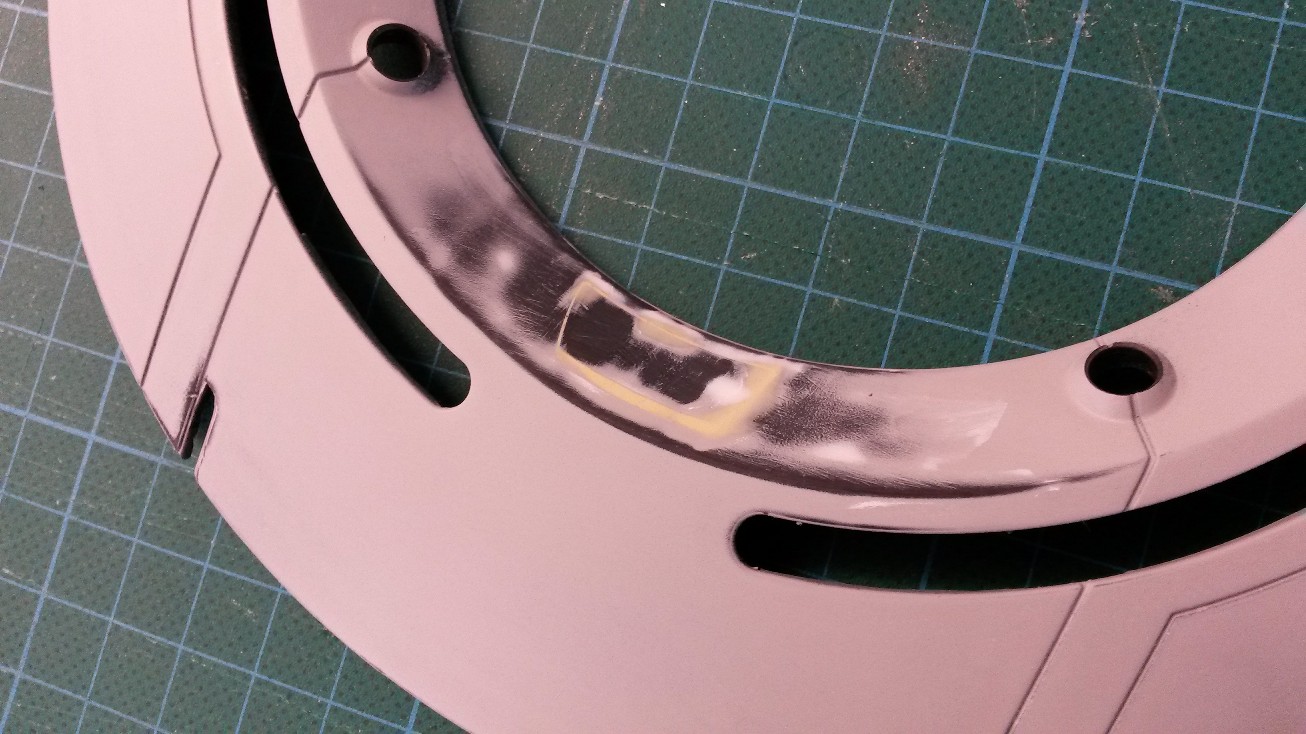 The internals are quite clean despite of the number of LED used. I plead guilty for using a fair amount of hot glue to isolate connections and have the LEDs stay in place over a short amount of time, and not wasting epoxy.
- 4 ohm 20mm speaker
- hidden switches using fake magnets in the back
- internal reflector with alu tape to maximize diffusion / reflection for the inner ring and avoid internal shadows due to the electronics.
- proper 16 segment boot sequence, measured 250 ms per step via movie analysis and key frames. I had to cheat though, I didn't have the right multiple for the LEDs, so some segments are slightly shorter to match the amount of segments.
- spinning blade effect with dimmed pattern (not just on / off), very realistic 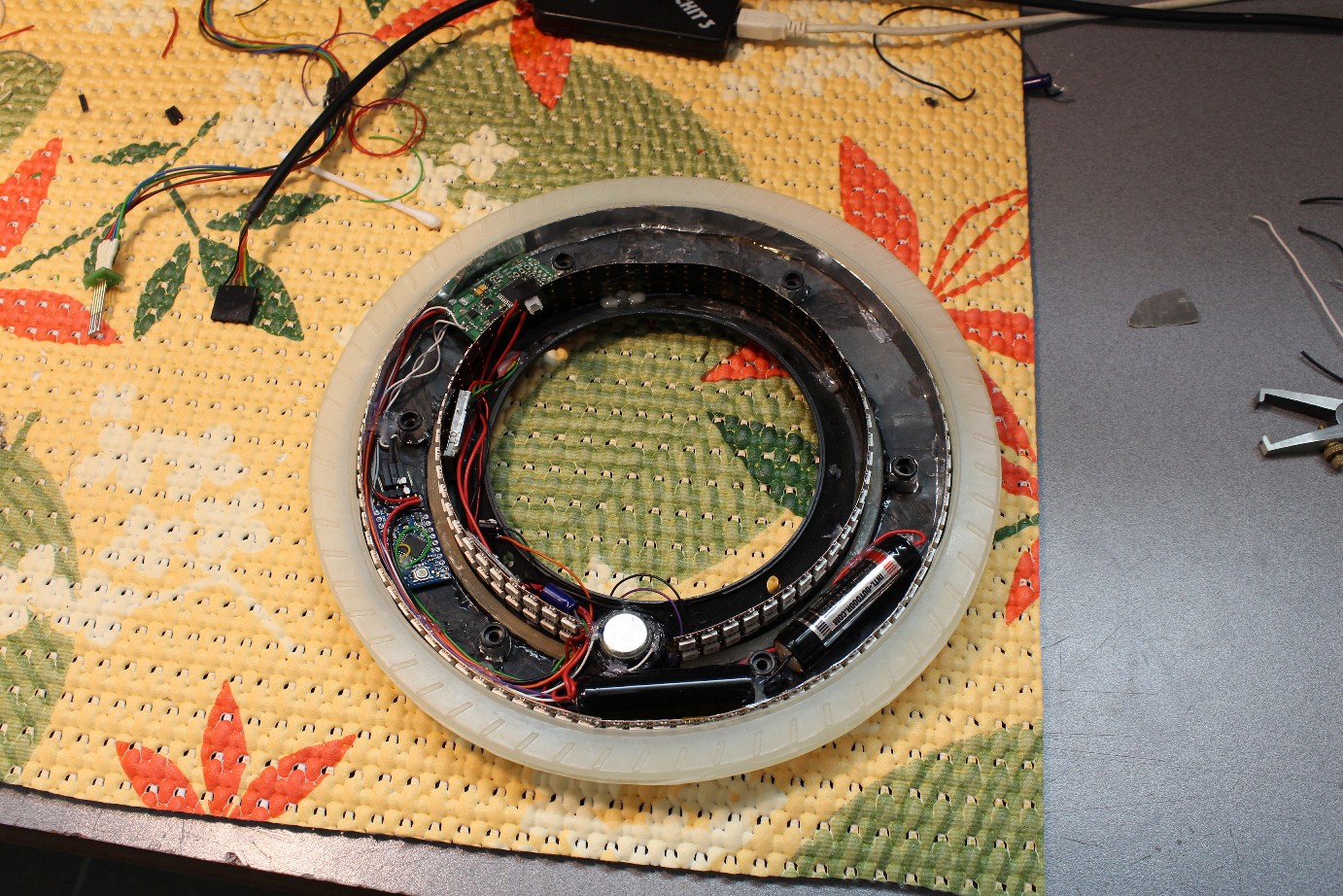 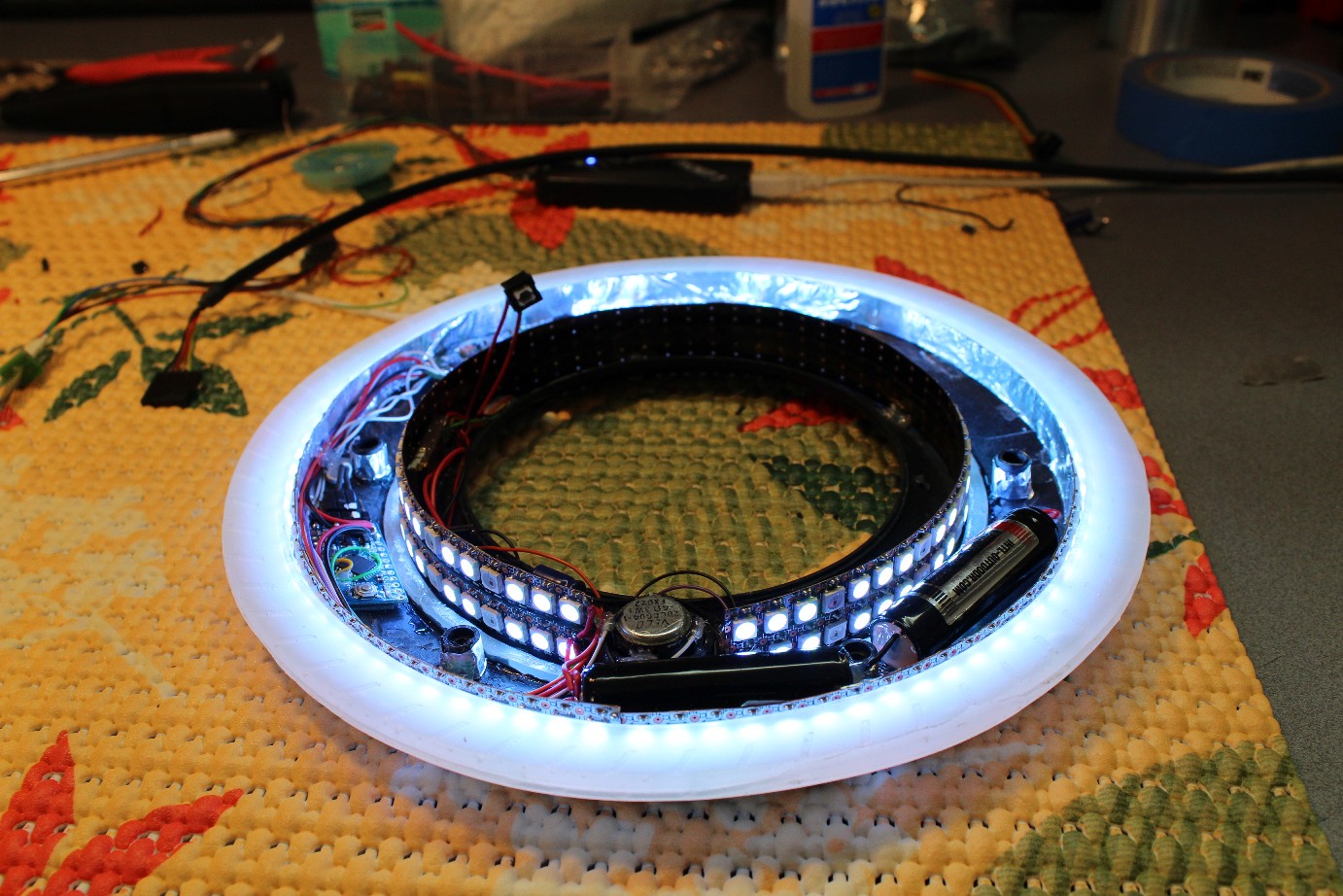 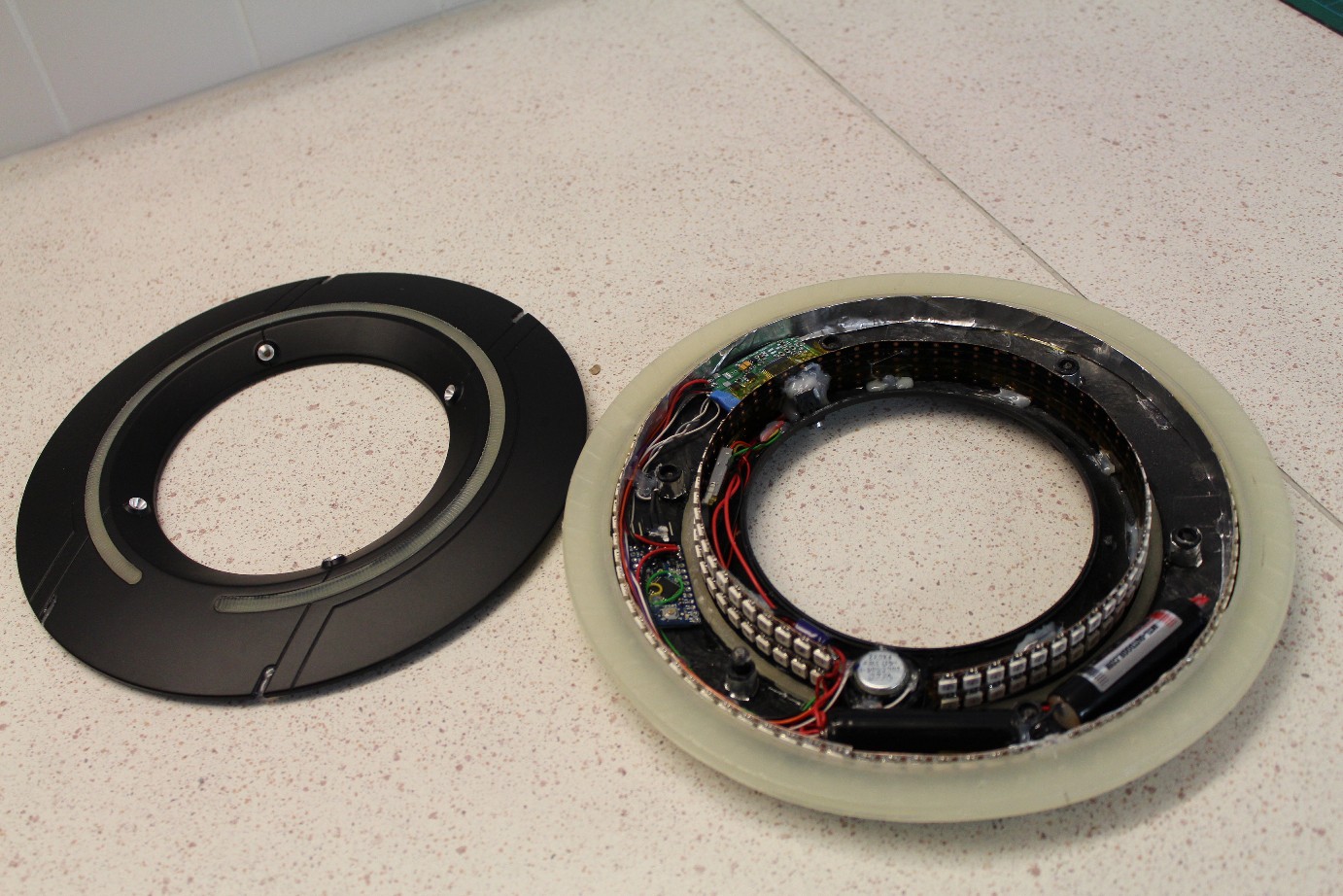 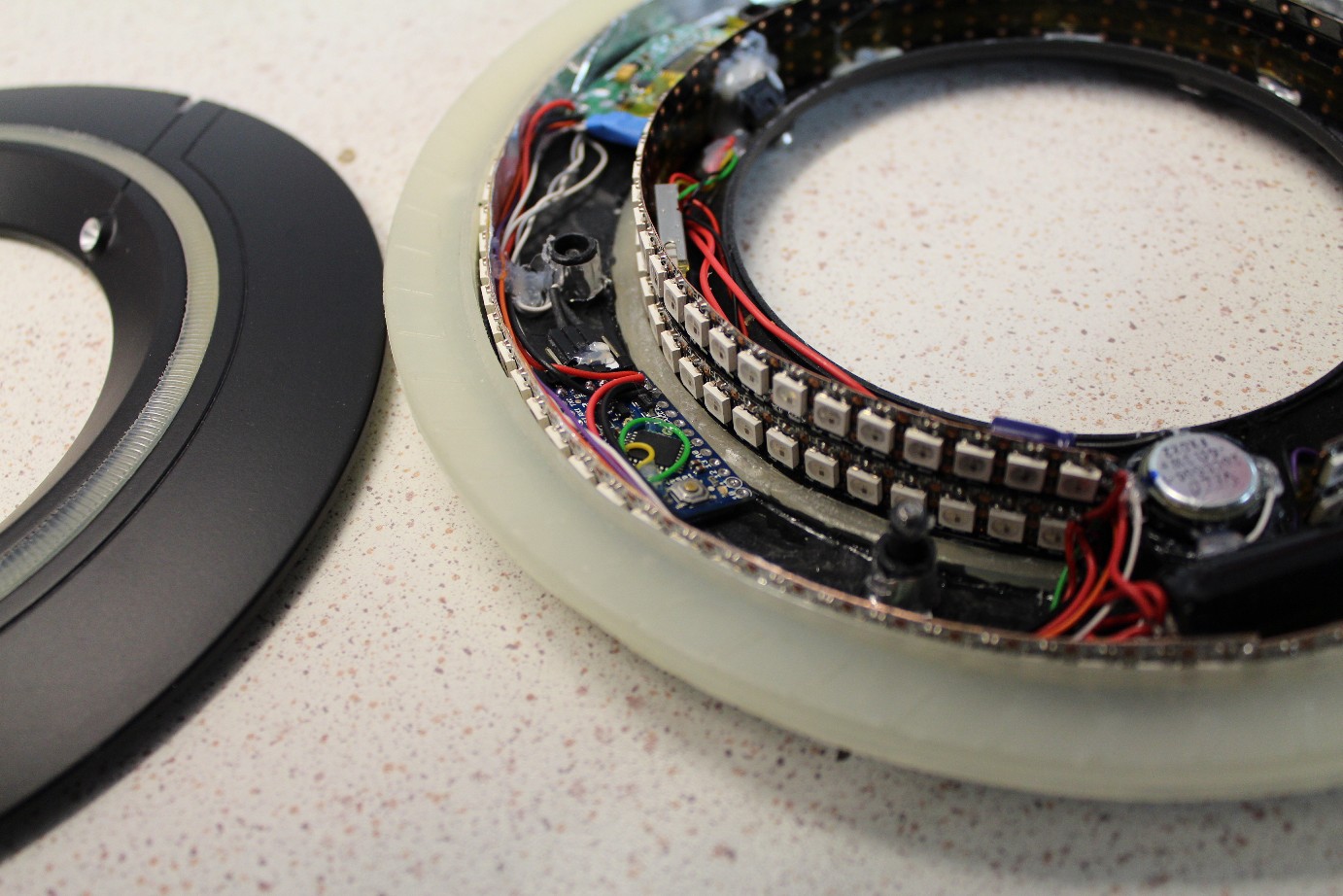 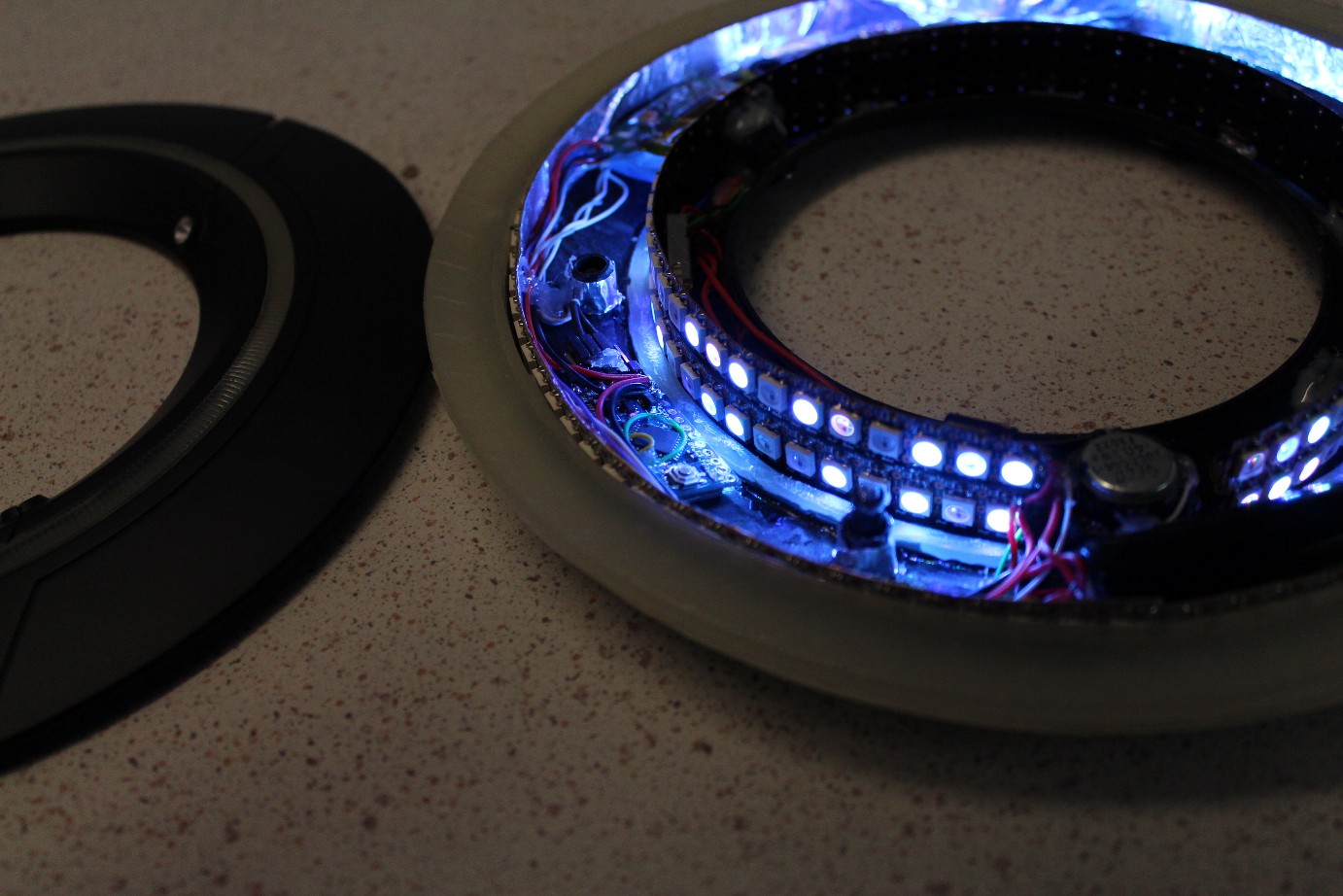 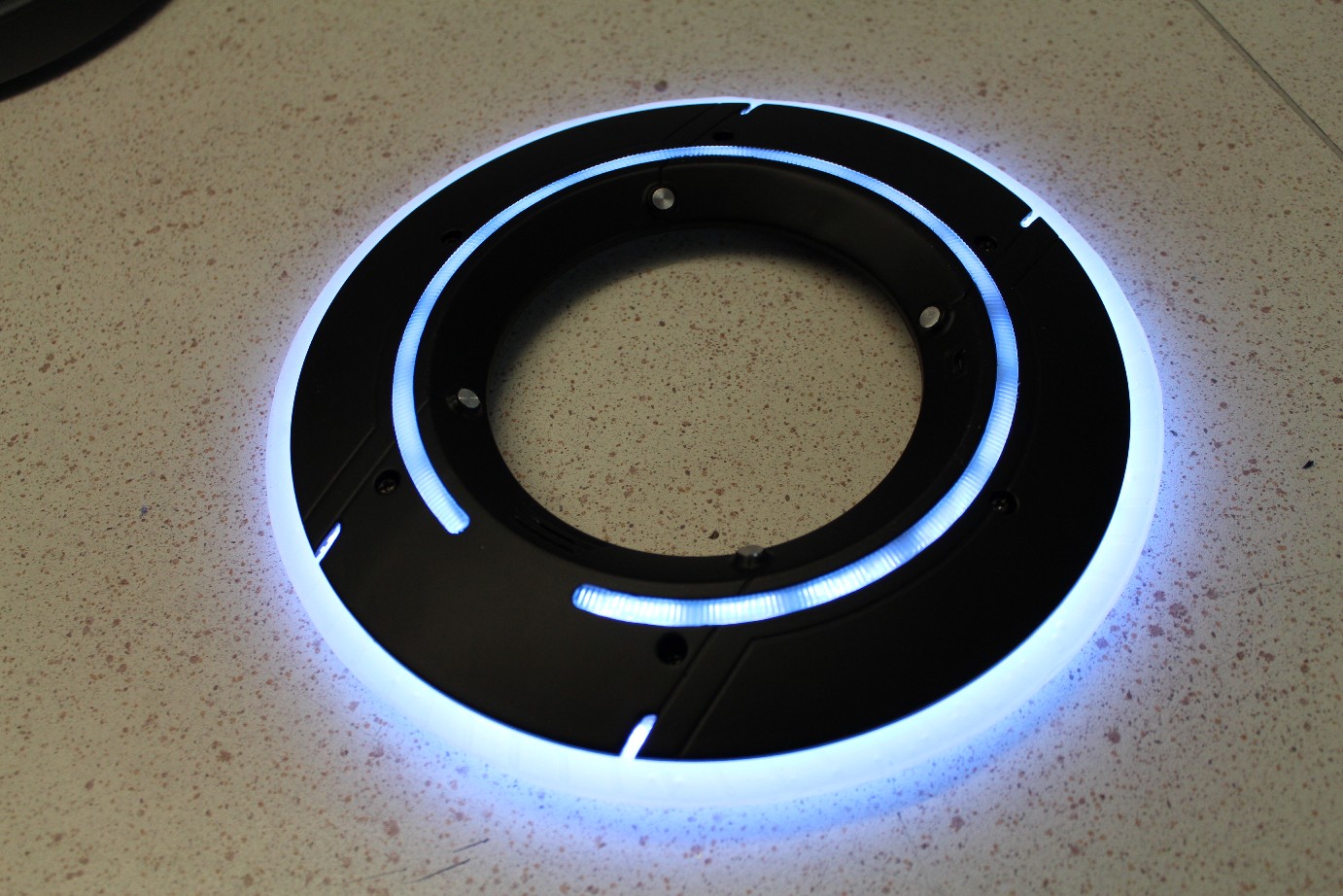 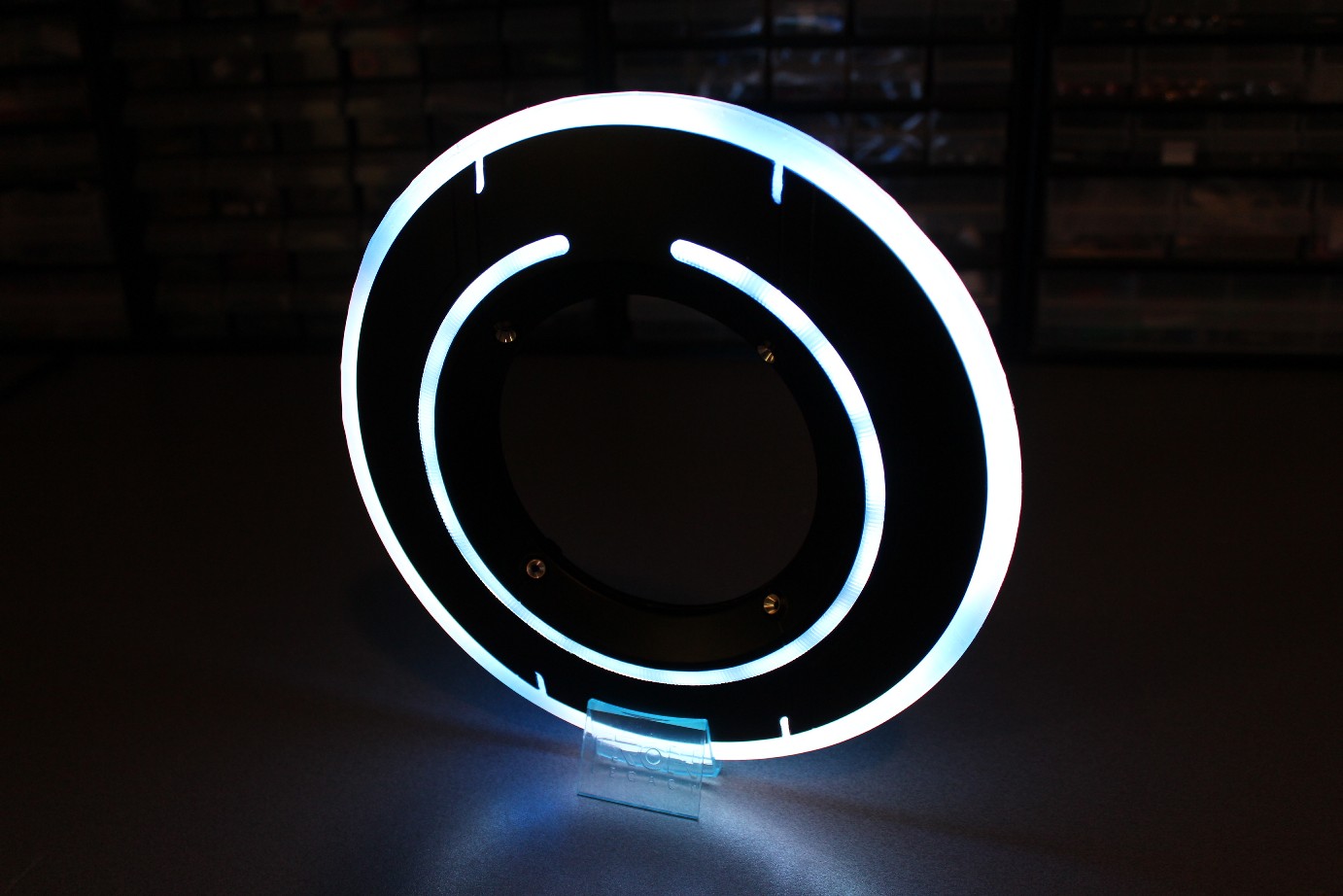 I know it's far from being accurate. I decided to totally mask the former activation switch from the toy though it seems the engraved contour appears on the original prop. Added some alu bezels to match the ref pictures I've seen in this forum. Hope you'll enjoy !

This is incredible! Nice work with the electronics!!

I too made some effort to enhance the Sam Tron Disc as well. I did mine some time ago without addressable, RGB LED strips.
I ended up having to create an internal diffusing and light blocking module to help the light transfer around the disc perimeter,
but the down fall was it took up a bit of room, but I think the results turned out ok.

I had to make my own flexable (strip), dual sided copper circuit board (layout to eching) to hold 56 single color LEDs, as well as for the 16 LEDs
around the center ring. No sound.
It is amazing how much simpler micro controllers and addressable LED strips makes short work of electronics these days.

Yours really looks great and works well, given the space available in the toy.
Nice job.

RPF PREMIUM MEMBER
thank you for putting a USB drive in there, that totally rules and just nails this build!.
R

This is THE most AWESOME thing I've seen on here!

Too cool man...I got into the animated series after Legacy. Great work!

Fantastic work! thanks for sharing I have recently been looking into arduino ran prop's as so far I have only done remote controlled animatronic type builds.

RPF PREMIUM MEMBER
Brilliant. It does everything the original toy should have done. I esp. love that you can listen to Tron music on it! =)

thanks ! my Blade Runner "hum-brella" offered to Vangelis has the same thing in it. Not a game changer per say but it sorts of embeds some of the spirit of the movie, and I like it.

RPF PREMIUM MEMBER
Awesome build. Love Tron, love the discs. And this one is phenomenal. The movement sensorsd pitch-changing effect as well as when you first light up. The sound and everything is just amazing.

RPF PREMIUM MEMBER
can i ask what light strip you used for the outer ring? I can't tell if its a double or single row of SMD lights.

They look to me to be these, but not sure:
http://www.adafruit.com/product/1506

agliarept said:
can i ask what light strip you used for the outer ring? I can't tell if its a double or single row of SMD lights.
Click to expand...

those are WS2812B based strips, indeed.

RPF PREMIUM MEMBER
Seriously impressive work on the electronics that is a very​ nice prop replica.

thanks a lot ! I really enjoyed it as it converged at the right pace, except for primer drying time lol. The sound fonts were ready for a quite a while, as Novastar authored those back in 2011 maybe (Crystal Focus v5 era). I only needed to allocate a proper time frame to work on it.

Removing a metal disc inside a revolver cylinder.