After building the GlassDragon, I wanted to tackle a design that I had made over twenty years back, but had failed to bring it to life as a model, as the shapes were just to complex for my then current skills. This ship was based on propultion that wasn't the normal plasma drive, or warp engine. I wrote the following essay, to flush out the details surrounding the tech.

This is an tech essay about Gravity Drives. This is not a story. I consider this background information for some of my other writing, and similar information about The Vermillion. Please let me know what you think about the tech.

The Gravity Drive
Gravity Drives have been used in many different ways, for example, most common gravity drives are used as a secondary means of propulsion for most commercial frigates in the Galaxy class or higher. As most of the drives capacity is for mass movement, it would be easily adopted to larger cargo carrying vessels. The Gravity Drive is a side step in what developed into the more common and much more viable Warp Drive.

The warping of space/time is a defining factor of gravity. The distortion of gravity make a “pull” or a “push” possible for an object in space. Mass being the key component of a distorting factor, energy can be forced to mimic this effect. The requirements are high, but the yield is almost infinite. The problem is the management of the returns on gain. Gravity Drives focus on “pushing” an object based on its relative position to other massive objects in space. The closer a Gravity Drive is to another gravity well, the better the resulting “push”. Obvious problems surround such a design, such as the predictability of such a reaction relative to the bodies in the solar system, thus most gravity drives are not calibrated to any set reaction, but rather a set of yields biased on feed-back of the reaction. These measured returns of data then are fed back into the reactor, and self-govern the reaction within acceptable limits.

The Vermillion is a great example of Gravity Drive Technology at its finest. There are many different examples of Gravity Drive technologies throughout the known universe, but the Vermillion is the classic “renaissance” in Gravity Drive Technology. While its inception as a design happened early in the 21st century, there were not viable designs for Gravity Drive till the later part of the 22rd century, Earth time. The Vermillion’s aim was to bring maneuverability and speed to bear for the use of the pilot. Many designs leading up to the Vermillion had problems with maneuvering, simply because of the brutal nature of gravity drive mechanics. A second and tertiary drive had to be linked to the controls in order to ease the directional forces into a smoothly running curve. The Vermillion’s drives are four main drives and four smaller drives, all working in sync.

As Gravity increases, so does the radiation needed to sustain the effect, heavy shielding is far too impractical for the job in space, and the only way to do it is through changing the polarity of the radiation so that it moves away from the crew. As much energy is spent to shield the crew as moving the ship itself. As far as movement is concerned, it is a dirty means of travel, much like the steam locomotives of the 1800’s. Effective, powerful, but also dated.

The gravity drive became a great workhorse for the defense of planetary systems, but as an offensive weapon the Gravity Drive was limited. This technology was however integrated into inertial dampening, and the curves associated with hi velocity acceleration. Larger ships could benefit more from Gravity Drives, and Gravity Drives are still in common use among them, because of their economy of scale. Transitioning the gap between the practical and impractical is often a matter of scale and cargo. Additional shielding often comes at a price of fuel; in the case of Gravity Drives it means energy expenditure. In a larger vessel cargo vessel, less energy is needed to shield the crew, and maneuvering is not a primary concern; thus forward motion only allows for purpose built Gravity Drives, are self shielded. The rest of the Gravity Drive systems faded out for the newer and much more reliable fission drives.

In all, the Gravity Drive was overtaken by practicality and convenience. Gravity Drives are linked to their reactors, and distance is a factor in the distribution of energy for the energy reaction. The integration of all the components in the Gravity Drive systems made the modular designs of plasma and fission drives much more economical and serviceable. Space considerations also allowed the newer systems an advantage in the market for smaller ships. Copyright 2011

Here is the drawing that I made to follow for the Vermillion.

AWESOME write-up..and i love the shape of the ship!! can't wait to see this fleshed out..

I decided to work in foam, (foam, yes FOAM... ) when I discovered IDEBOUNTYHUNTER's epic Betty build and realized that I could do this Vermillion design! I did not have the money to spend on nice urethane foam baord, but I did have building insulation foam. Slightly harder to work with... (understatement).

Here are the first moments:

Coming along nicely, you can get Urethane foam pretty cheap if you go with a lower density. its still more expensive than the insulation, but easier to work with and the chemicals wont melt it.

Thanks, this one has turned out pretty good as you have seen, but I would like to get a more rigid foam to work with... you saw all the problems I incurred while trying to keep it smooth... I did more patching than shaping!

Speaking of, here are some more pics:

After getting the bridge and nose fleshed out I moved to detialing the cockpit area...

But I soon learned that it was not going to work that way.

So, I hacked it off to add it in later.

i saw your "glass dragon" .. very nice job by the way .. and this one looks like a star trek BOP .. and i think that this is gonna be a cool build to watch!!!!

If this turns out anywhere near as nice as the Glass Dragon it's going to blow our socks off!

modellernz said:
i saw your "glass dragon" .. very nice job by the way .. and this one looks like a star trek BOP .. and i think that this is gonna be a cool build to watch!!!!
Click to expand...

Thanks, this build is a first for me in many ways, foam and the design is totally conceptual (I didn't design it to be easy to make just so I could build it) I have posted this on several forums, you may have seen it already... I hope it turns out good in the end!


trekriffic said:
If this turns out anywhere near as nice as the Glass Dragon it's going to blow our socks off!
Click to expand...

I am thinking of an Old Republic design... nothing from the game or the stories, but something in the grand style of CEC. I have put off any plans till I flesh out how I am going to approach future builds. I am debating of whether or not to make a master for casting purposes. I am currently talking with someone about getting urethane foam board... a much better medium from this stuff. In any event it is always a rise to get a compliment like that!

Here is some progress on the main body. Here it has the resin on it, in dire need of sanding.

The underside has many challenges to overcome.

Some new pics, this has the cockpit area fleshed out. 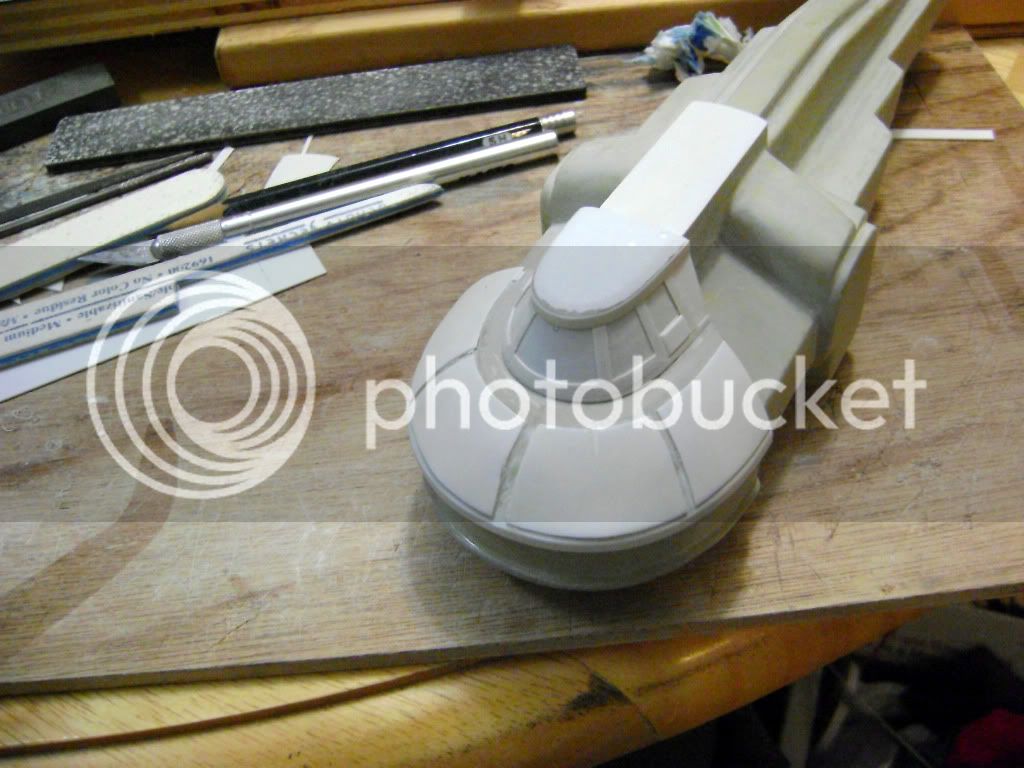 Details on the body. I take what I can find and augment. In this case several cup lids are taken and spliced together for one ring, then another is added for the dome. Lots of filler. Later I started working on the inner detail for the hole in the center.

It has been a long time and I have almost finished this project!
Time to get you guys caught up!

Here is the detailing on the upper hull deck, notably the scribing.

Here are some details of how I arranged the new shapes on the upper hull deck...

The parts are put in one at a time, and leveled to the table by a 45 triangle. 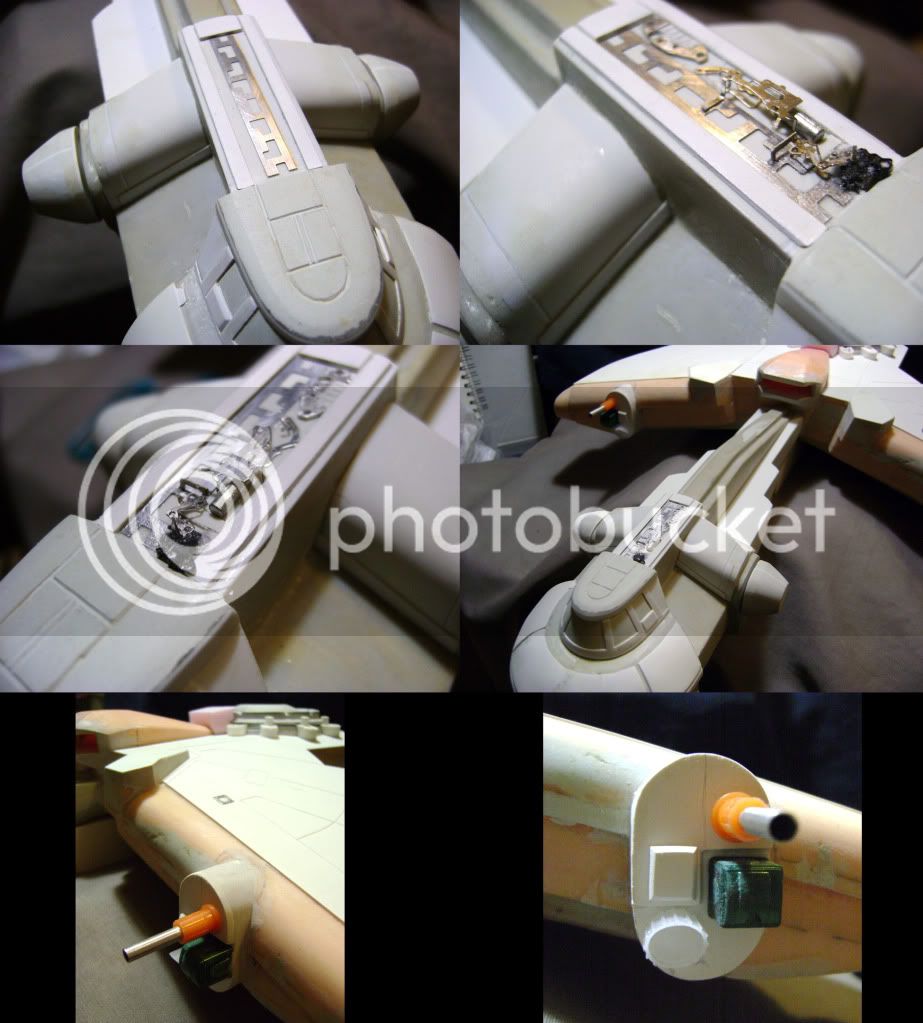 Some experimenting took place trying to get the right look for the ribbing,
I ended up going with spaghetti noodles!

Lots of little things come out of a razor head, and I found a use for most of them!

Its some simple stuff on the gun ports, but it looks like it belongs!

The front array of garb was fun as hell to work on,
it was littered with crap!

It keeps getting better. The detail from concept to finish is fantastic.

I’m catching this for the first time and this is great! I love seeing original designs like this and the individual creativity that is put in it. I checked out your Glass Dragon build too. The cockpit details are fantastic. Looking forward to more.

Yellowjacket said:
It keeps getting better. The detail from concept to finish is fantastic.
Click to expand...

Thanks so much! I know I have said it before, I put the concept before anything else these days. I have found that the preconception of a design makes everything, and I mean EVERYTHING go smoother. Just look at all those builds that have all that reference to pull from... X-Wings, Ties, BSG, you name it, when you have a plan, it is so much easier. I don't ever do smash & bash, you never know what you will get.


Randy13 said:
I’m catching this for the first time and this is great! I love seeing original designs like this and the individual creativity that is put in it. I checked out your Glass Dragon build too. The cockpit details are fantastic. Looking forward to more.
Click to expand...

Thanks! I have a lot more to go, just have to get around to posting it... but thank you for browsing, I am going around in circles because of my originality, most people don't relate... most like to see SW, or BSG, S1999... anything mainstream... but I come up with designs that are outside the box, but of the same universe, and as a result, most folks are not too enthusiastic about them.
You must log in or register to reply here.
Share:
Facebook Twitter Reddit Pinterest Tumblr WhatsApp Email Link
Top