I recently got one of Roman's AMAZING weathered ANH Obi-Wan lightsabers with the chrome 4-piece pommel. Being me, I had to take it apart, mess with it, and make it my own. I've always loved how this saber just looked beat to hell, so I was definitely going for the heavier side of the weathering scale on this one (and might have gone a bit overboard). The only parts I swapped out from the original RE kit were the transistors, which were swapped for vintage 70's Motorola short profile transistors.

Do most people leave their windvane part spinning loose? Most photos I see it in the higher position, so are they gluing it before it meets the threads there?

I had no experience using gun blue, but I really wanted to see what I could do with it here. I tried modeling the weathering on how most people's "real parts" lightsabers looked, so my main focus was making the grenade as aged as I possibly could. This is where I made my first mistake...

When I disassembled everything and started beating on the parts with a hammer to get all the dings and dents I wanted, i neglected to remember that I should have kept the grenade body and stem screwed together. Because I had them separated, by the time I was done hammering the grenade, I had bent the top rim and the two parts wouldn't screw together anymore. After a TON of filing and fiddling and more hammering, I eventually got the two parts back together, but you will notice in the photos below that there is a bit of a gap around this connection now. It's not horrible, but noticeable. I think it adds to the authentic old look of it though. I'm not entirely finished with the transistors or clamp yet. Right now they are only held in with their wire stems, but it's pretty stable. Now we come to the bluing.

I first used the following methods to weather my grenade and booster after lightly going over them with steel wool (not entirely removing Roman's weathering):

After all that I found that the most successful method was simply wrapping it in a water soaked paper towel and leaving it outside overnight. This gave it a nice layer of rust that survived later cleaning, scrubbing and bluing. I found that the ammonia, coke and lemon juice did little to nothing to my grenade.

I found the gun blue to be very frustrating. After getting the booster and grenade completely black, they would get a white film (which easy came off) but then they would instantly start rusting and lightening up. This happened even after several treatments. And after soaking in cold water and drying, the blue would STILL come right off on my hands, and any light scrubbing would take it off as well. This is why my booster isn't as dark as I would like it right now, it simply wont stay on. I let it sit for 24 hours, I even sprayed the parts with BC Barricade. I even tried just lightly drying them instead of scrubbing and it still came off.

Does anyone know what I'm missing here? The same thing happened to the brass parts with Brass Black, though it stuck a bit better than the steel parts, it would still rub off. I know many people just spray the whole thing down with a matte coat of paint, but is that the only option to not get the stuff all over your hands anytime you touch it? I still want to re-blue the booster to get it darker, and possibly a little more on the grenade as well. 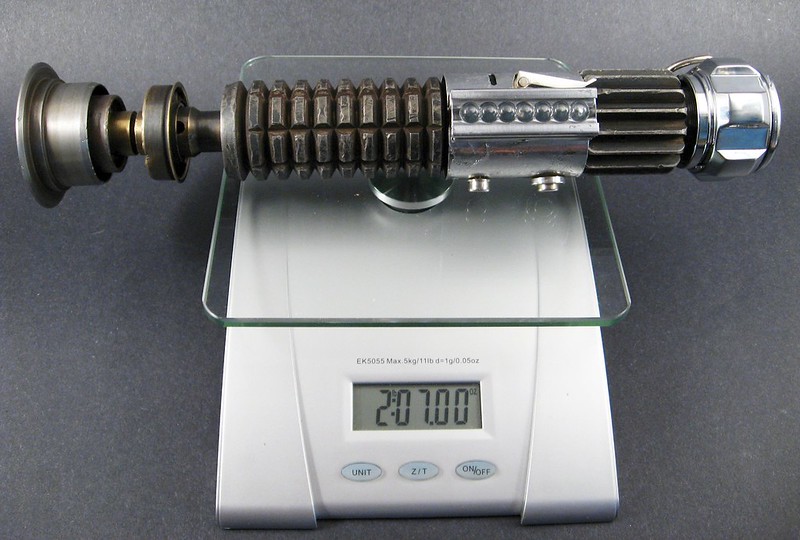 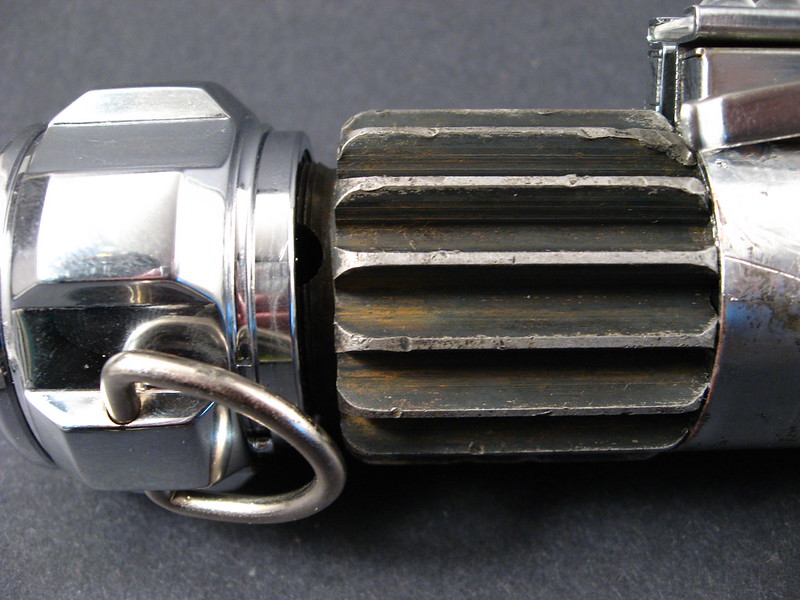 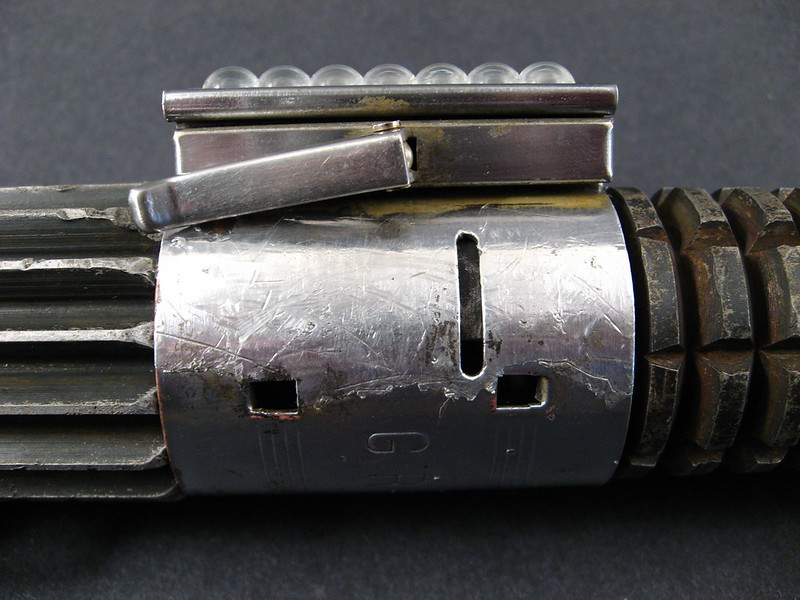 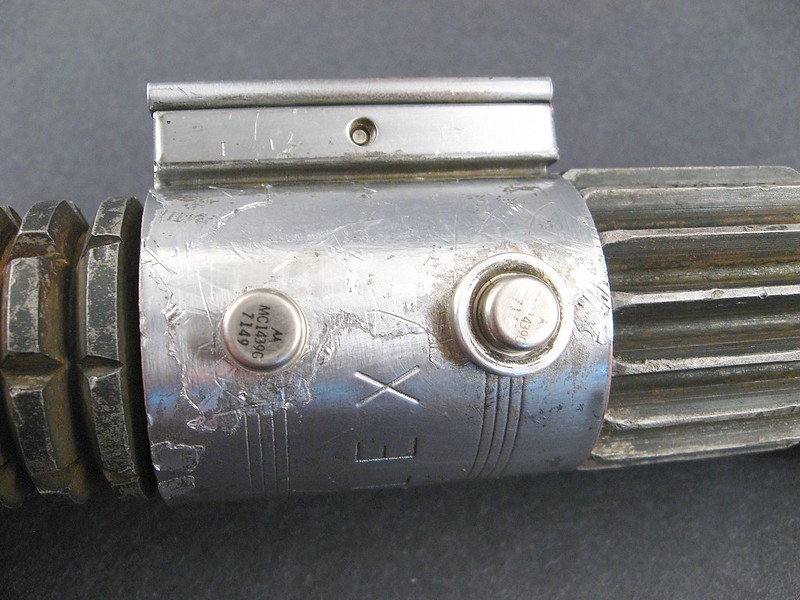 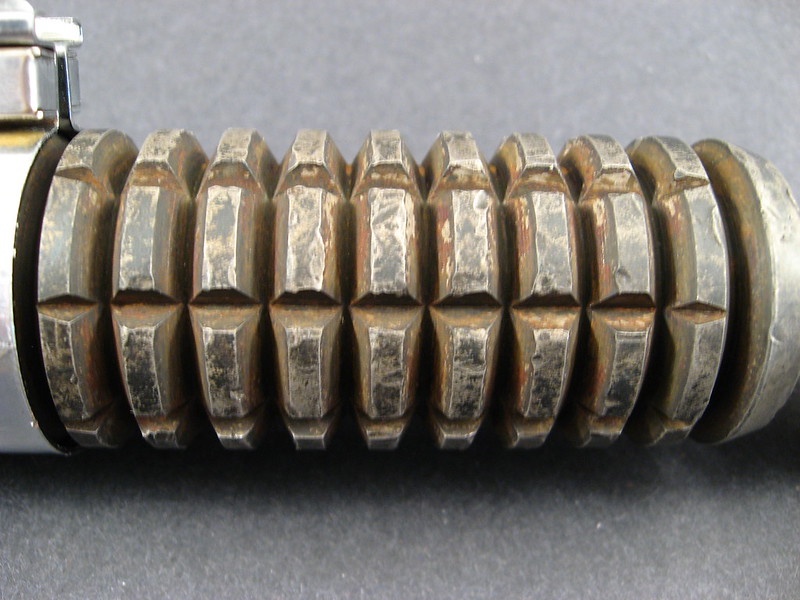 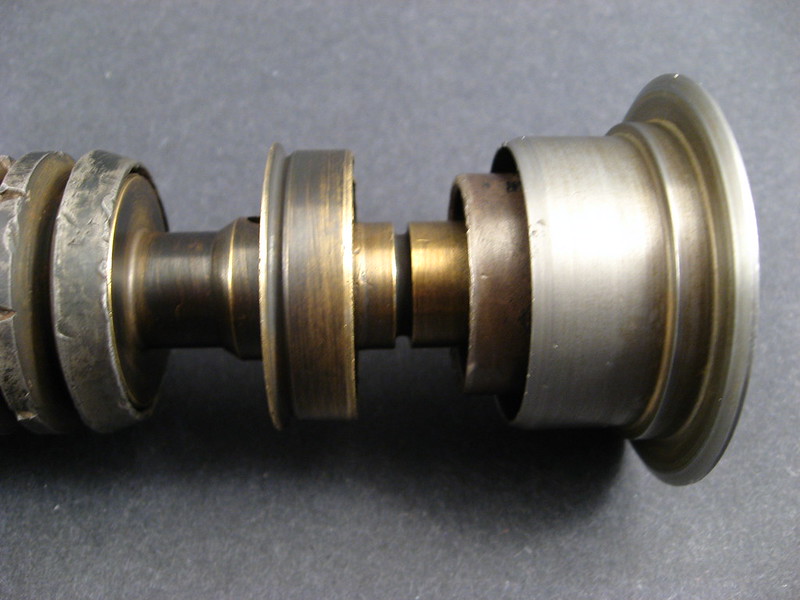 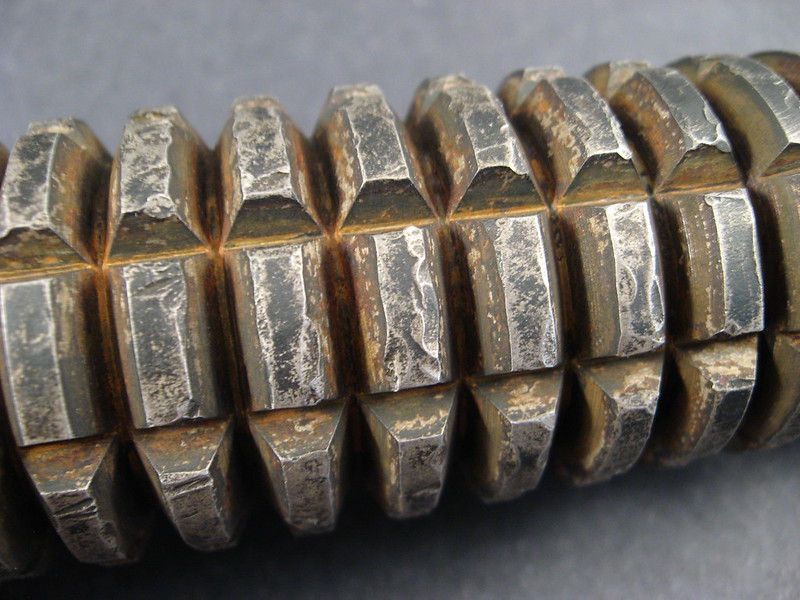 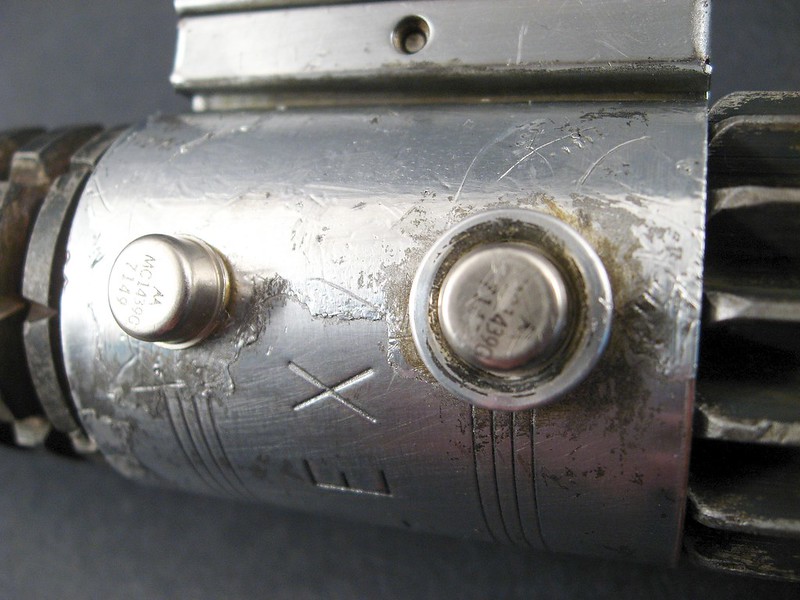 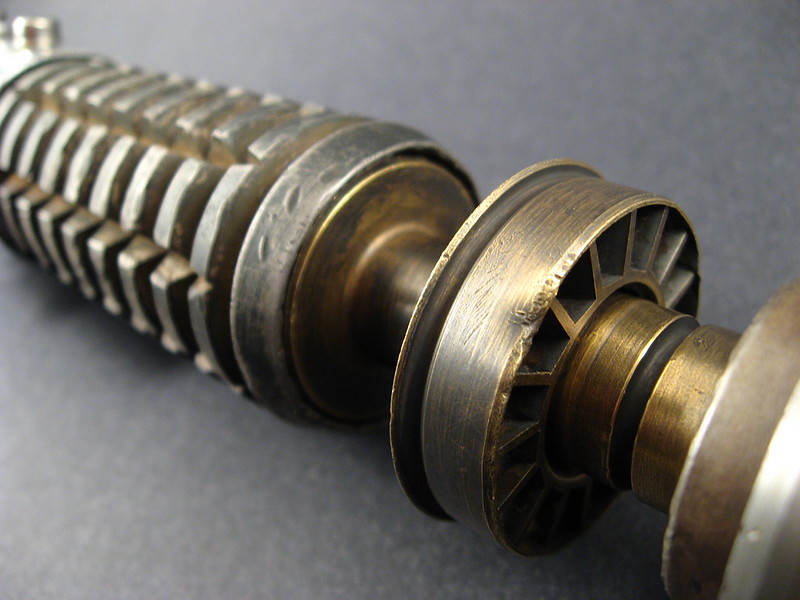 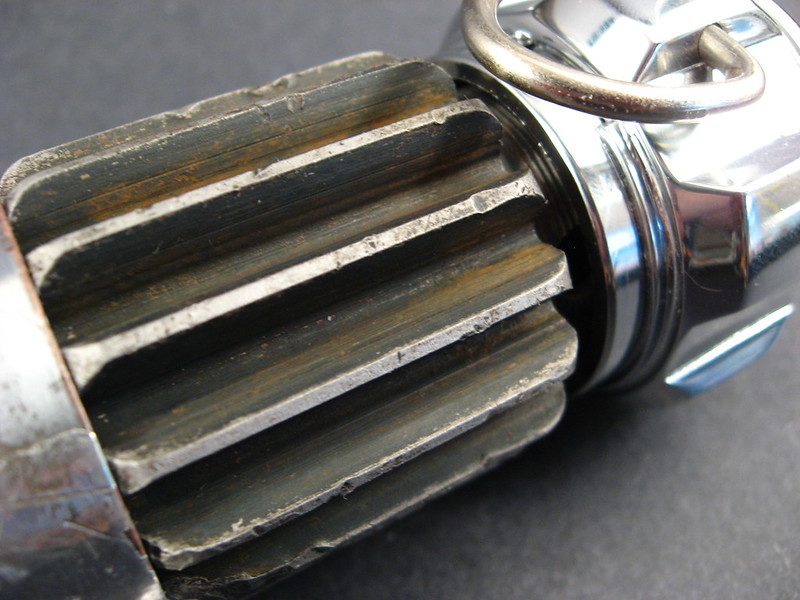 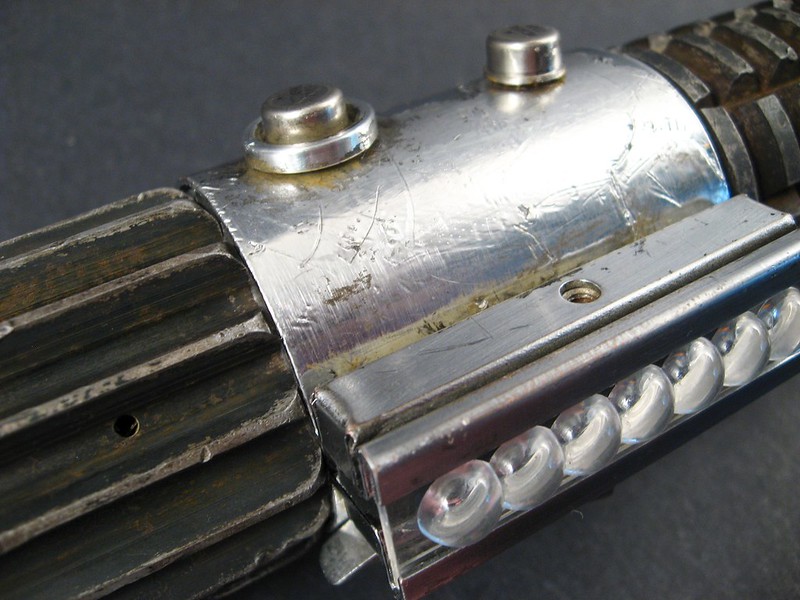 RPF PREMIUM MEMBER
Honestly, I like it as is! The weathering is great.

RPF PREMIUM MEMBER
Me too! I have yet to try Gun Blueing but I've heard people hit it with a clear coat to seal the thing from oxidizing

RPF PREMIUM MEMBER
sorry i can't help you, but i think it came out amazing!

RPF PREMIUM MEMBER
That booster looks perfect! Looks almost like a real one with use.

From my vast and frustrating experiments with various gun bluing on Obi parts:

I've always had the best luck with just standard Birchwood Casey Perma Blue, not the Super Blue stuff. However, I think you might actually be leaving the metal parts in the chemicals for too long. It seems that if you leave it in too long, I've found that it'll get a thick powder on the outside of it, which then flakes/brushes off and the metal won't be very dark at all underneath. I never left mine in longer than a few minutes, then rinsed them off with gold water, dried, then dropped back into the mix again if needed. Use an old toothbrush to get the powders off if needed before you drop it back into the mix.

Also make sure the parts are very clean when starting; any oils or residues (like from your hands) will interfere with the process.

If you're going to handle the saber often, yeah the bluing will wear off, so it's best to add that layer of matte spray to act as a sealant/barrier.

In any case, it looks really good as is, so don't worry too much about it!

RPF PREMIUM MEMBER
I only had the parts on the solution for 20-30 seconds, until the entire part was covered. The problem might be that I never cleaned them down to the steel, there was always something between the surface and the bare metal. I did make sure to scrub and clean them before bluing though, so I dont know what the problem was.

So when people using this stuff on their guns, does it come off on your hands like it does here? That would seem pretty dumb from a usability standpoint.

RPF PREMIUM MEMBER
I've learned to brush all the parts down with a wire brush first, just before you apply the Permablue.

And the gel works so much better then the liquid.

After I use the Permablue gel and rinse and dry the parts I go back over with a brush with Aluminum Black and work it down in the crevices or spot-apply for the effect I want. Once I've got it how I like it I seal it with clear flat acrylic sealer.

RPF PREMIUM MEMBER
You use aluminum black on the steel parts?

RPF PREMIUM MEMBER
Yes. It works and makes a more-black finish then the Permablue.

RPF PREMIUM MEMBER
Interesting, I wouldn't thick it would stick at all, like using it on brass. Maybe I'll give it a try. Thanks!

RPF PREMIUM MEMBER
Works great on the brass parts too.

RPF PREMIUM MEMBER
I think your weathering looks awesome! I know you are saying you want to take things a little further, but in my eyes, it looks awesome. The frag and the clamp look killer.

Your hilt looks great... though I do prefer the look that Roman creates. As far as the wind vane goes, I applied teflon tape to the threads on the main body where the fan housing (not sure what to call it) screws on. I did not like how loose it was when I handled the hilt. It is completely unseen, reversible, and allows the components to tighten up perfectly.

Looks fantastic. Really well done. I couldn't bring myself to beat on Roman's grenade with a hammer...but I might now! It really gives it that authentic look. When I was using the brass black, I found the only way it would stick to the brass was if I gave the parts a muriatic acid bath. Even after what I thought was cleaning the brass really good, the brass black would look really uneven and rub off easily. After the acid, it worked like a charm.

RPF PREMIUM MEMBER
I use super blue in a zip lock long enough to get the parts blue.. then rinse with cold water... blow dry with compressor... then re apply. Then I spray with barricade and let it sit over night.

Then I hit the steel parts again, with a cotton ball or paper towel/shop rag soaked with super blue. Then a tooth brush sprayed with barricade. Then spray down with barricade and let it sit for a few hours.

Same for brass. Then I ding them up, and re-blue the newly dinged spots. Rub with some steel wool lightly, rinse with wd40, and then barricade again. Dry with towel completely and buff it until no more blue is coming off. I get a great match for my real grenade that way.

The thing I will try next is let them sit in old used motor oil. A suggestion from JamesKenobi. ^_^

The few real grenades I've had weren't hardly rusty if at all... they were so oiled over the last 100 years from military oils or hand oils, they just were never rusty... Same with my booster.

RPF PREMIUM MEMBER
That first paragraph is exactly what I did, so I guess I need to continue with the rest of those steps. Thanks for the tips guys.

RPF PREMIUM MEMBER
I think it looks great. I'm going to have to try the paper towel thing tonight. Also, I had the same issue with the residue/not getting dark enough using aluminum black on my booster. I'll have to go pick up some barricade and do Scottjua's method this week.

RPF PREMIUM MEMBER
Thanks guys. Like most people who have one of these, it will be a never-ending project that always gets messed with and updated I'm sure.

A little off topic, but it's been bugging me. Anyone know why this is the only saber that has been completely lost to time? Lucasfilm Archives has all the others, but this one seemed to have disappeared after production. Are there any stories of what happened to it? Was it disassembled? It just drives me nuts that those few black and white photos are the best we have of the original saber up close.