RPF PREMIUM MEMBER
The next step was to do a little modification on the back end where it transitions into the pommel. I built that area up a bit with some Pro Poxy epoxy putty to give myself a nice smooth plug, which would help in the creation of the pommel socket.

I decided to step down the very end of the plug, in an effort to minimize any significant dimensional differences between the grip w/ cloth wrap and the pommel socket (since in the comic it's drawn as one continuous contour). 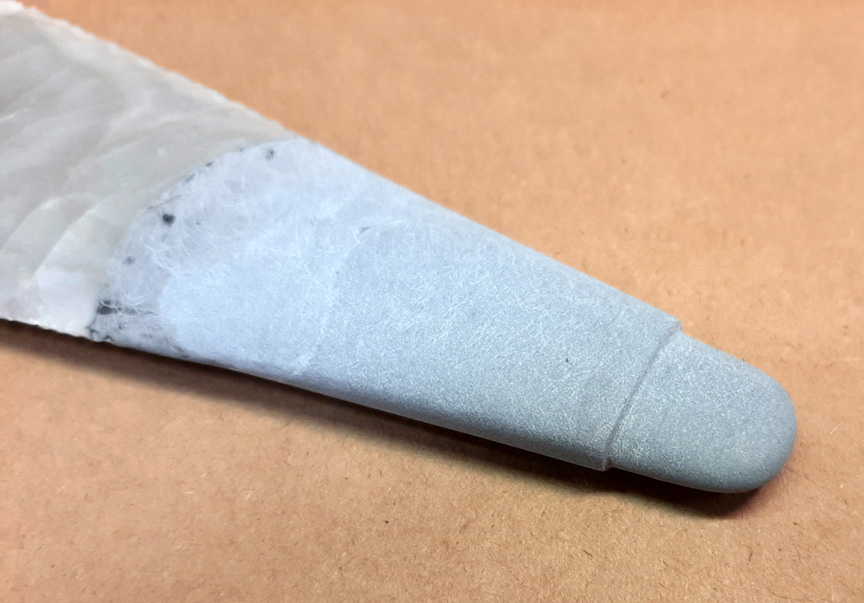 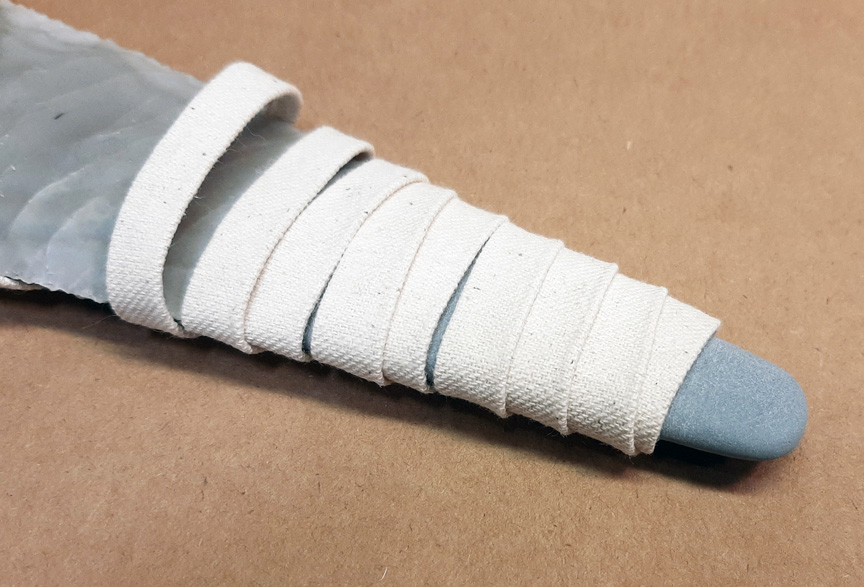 The first step in the creation of the pommel socket was to wrap the plug with .080" diameter aluminum armature wire - this would ensure a consistent wall thickness. 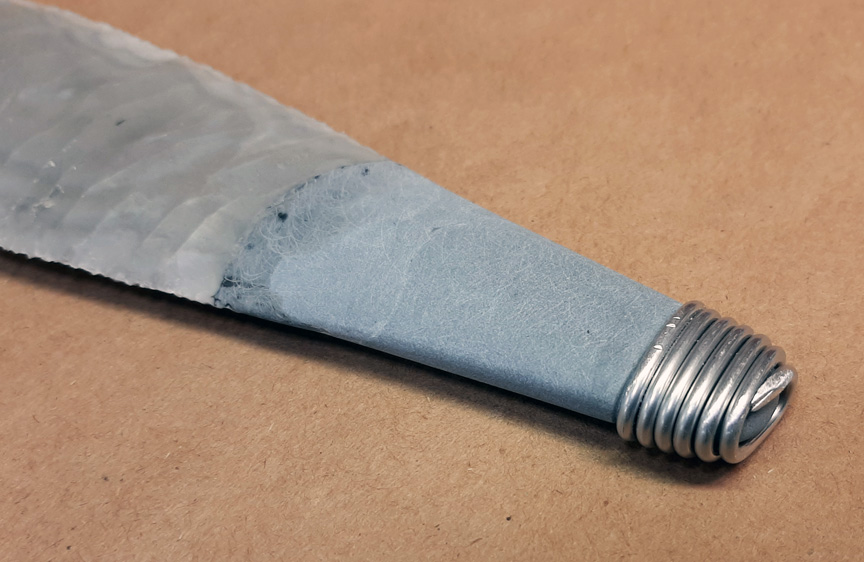 Then I coated it with a layer of Bondo. Once that had cured, I pulled the socket off of the plug. I brushed a thin layer of Vaseline onto the plug (so Bondo wouldn't stick to it), filled the inside of the socket with Bondo and pressed it back onto the plug. The excess squished out the hole at the back end and I smoothed that over to cap off the socket. 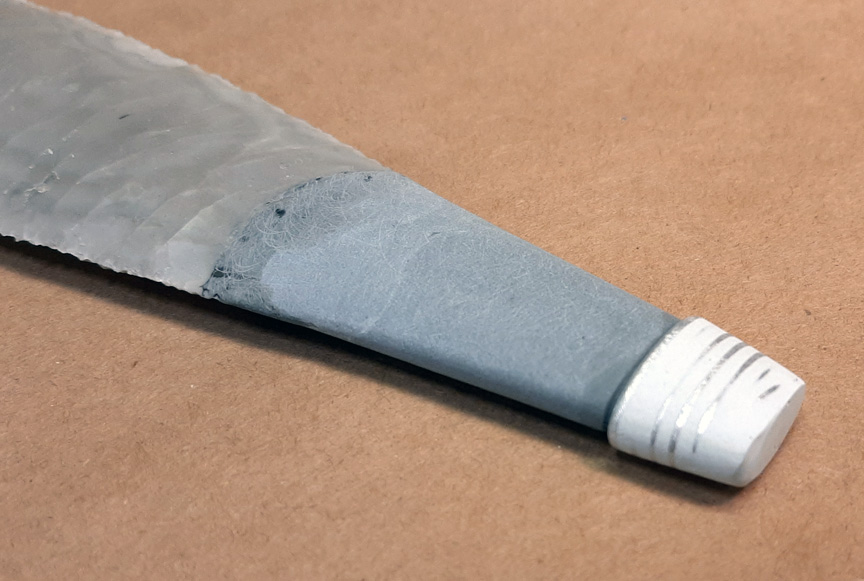 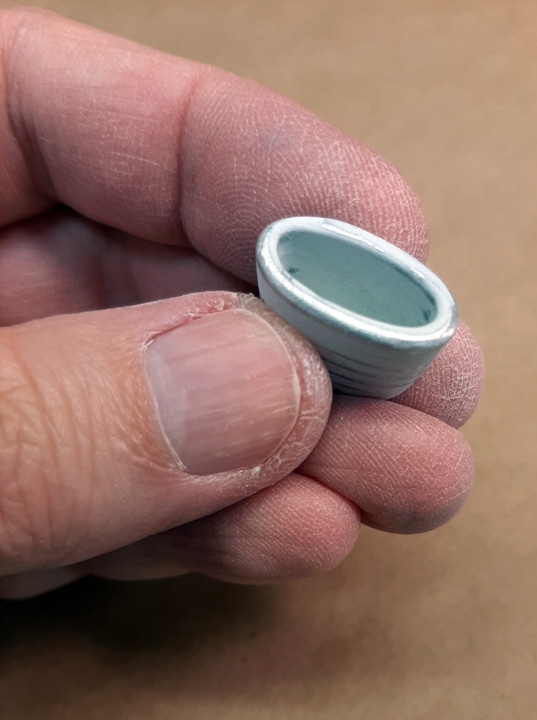 Next up was interpreting the transition into the main pommel shape. I could have tapered the socket end to a point, as it appears here: 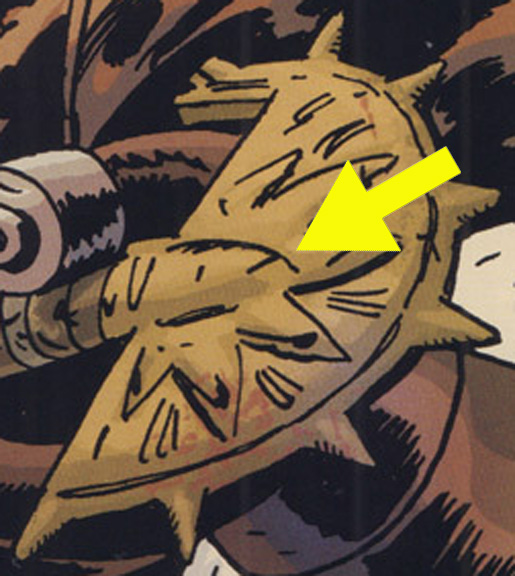 That would have been problematic however, as I imagined that the radial "petal" details on the pommel would have a definite thickness to them, which would result in a "stair-step" effect. Since the socket wasn't all that thick to begin with, the main half-circle shape of the pommel (which would be the very bottom "step") would end up being really thin, which is not what I wanted.

But then there were also these shapes that looked like they could be a bit more substantial, thickness-wise: 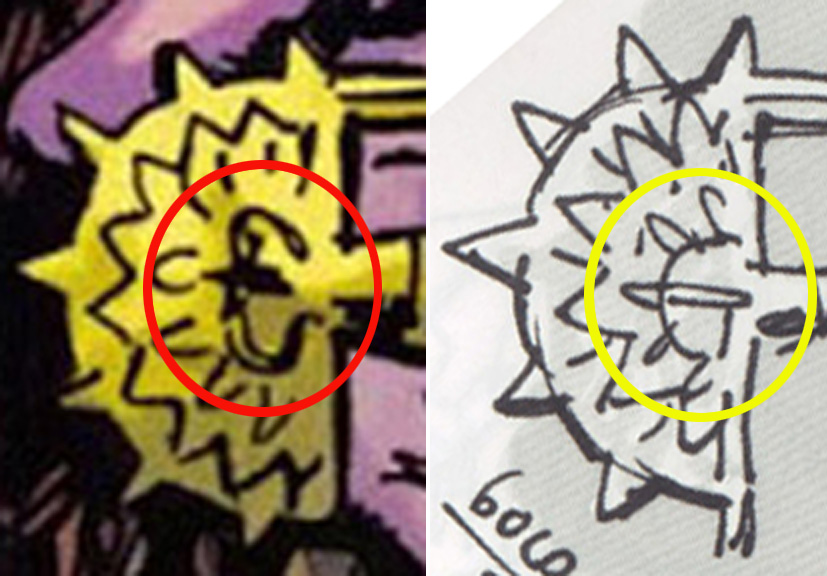 So I decided to go with something like that. After doing a line drawing to clean up the design and make it symmetrical, I cut the separate layers out of Ren Shape and styrene and stacked 'em up. 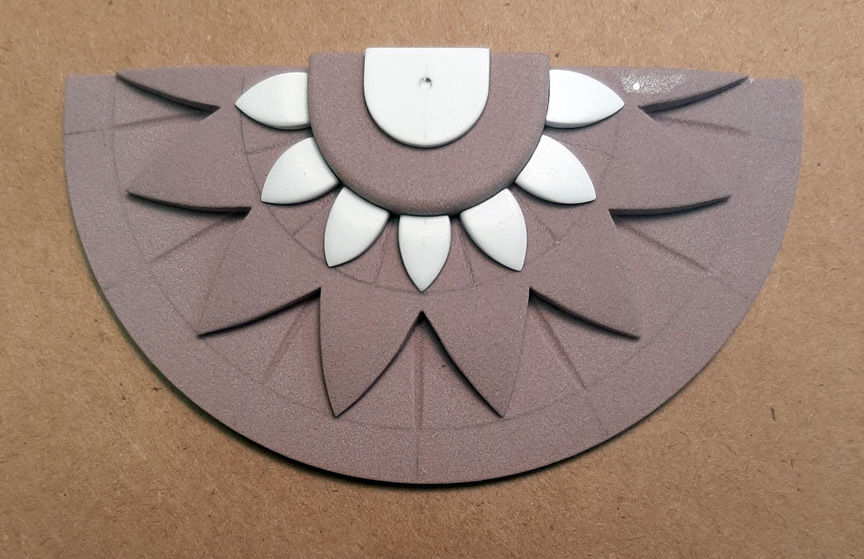 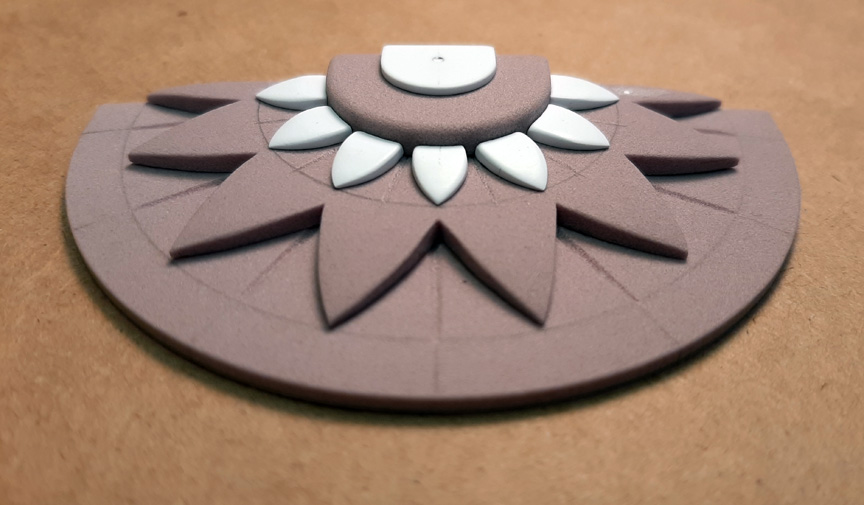 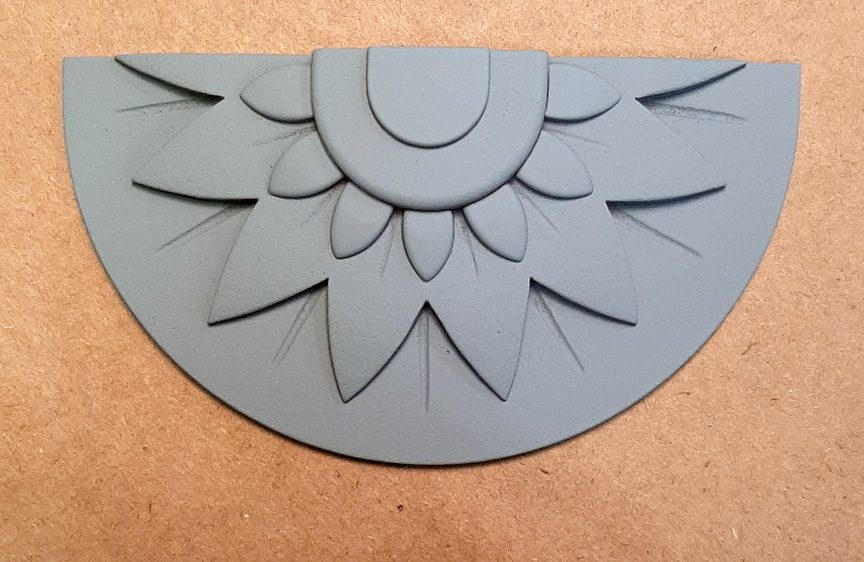 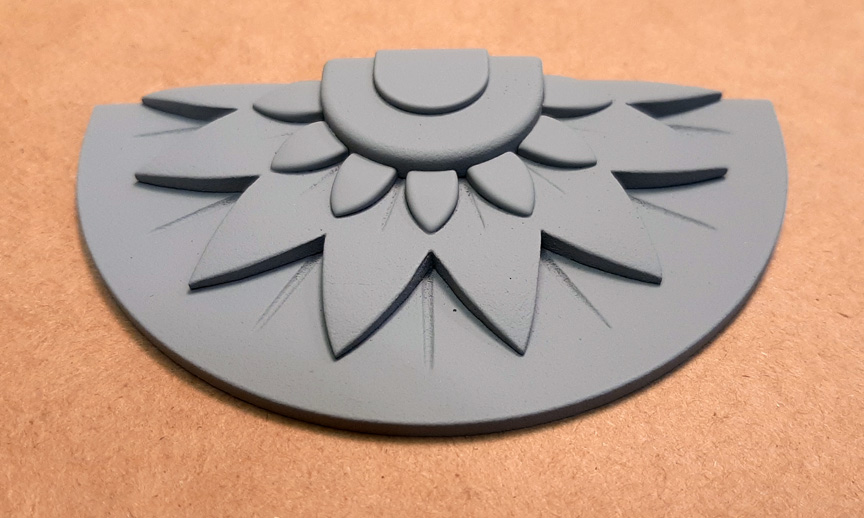 I only made one side because my plan was always to mold it and make two castings to create the full pommel. 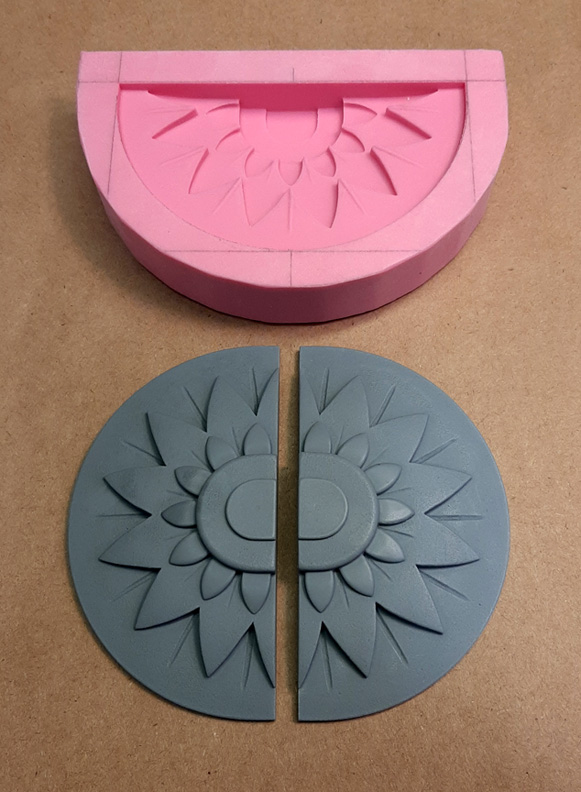 And then I made the spikes to go along the arc, also out of Ren Shape. 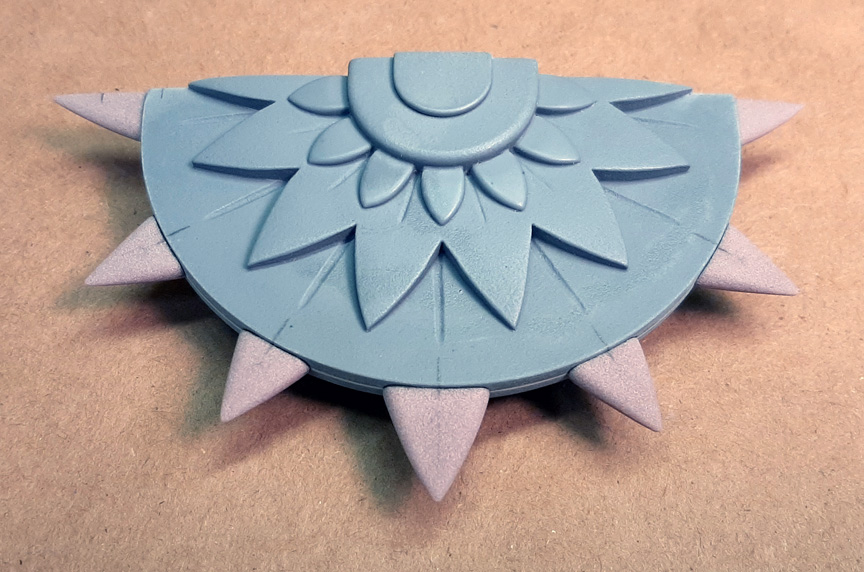 The last step was to make the prong that extended from the pommel, and then assemble the whole thing. I stuck the pommel onto the blade to check the fit in my hand - the inner point of the blade at the end of the prong ended up touching my knuckles, so I had to flatten that side. 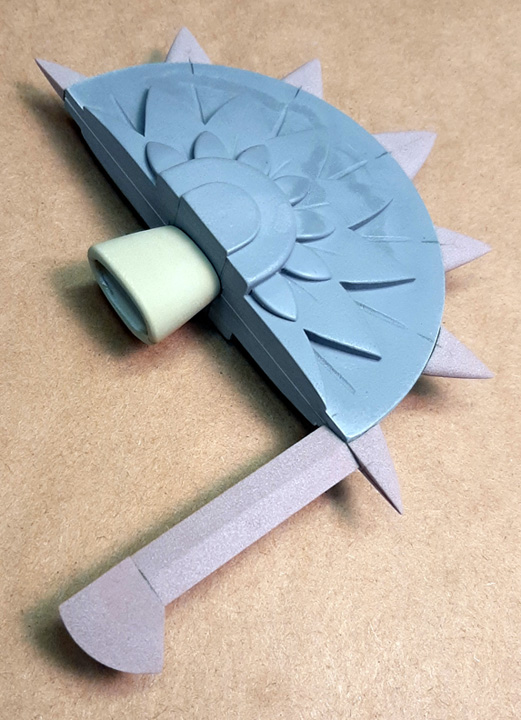 With the pommel now complete, the plan was to mold it, in order to create wax patterns for casting in bronze. However, in consultation with a friend, I was informed that the wax casting process would actually be easier if the pommel was in separate pieces (main body, socket, and prong). So I had to take it back apart, sawing the prong and socket off with a jeweler's saw.

And I am now currently in the process of molding those individual pieces. So from here on out, I will update this thread as this particular project continues...

RPF PREMIUM MEMBER
Now my "like"-button is broken due to overuse.

Tim, thank you for sharing! This documentation deserves to be collected into a printable PDF. I'd gladly put thia next to my HB making of books and props.

RPF PREMIUM MEMBER
Cheers, guys I'd been meaning to put this together for a while now, and recently carved out some time to tackle it (it was a bit of work).


DaddyfromNaboo said:
Now my "like"-button is broken due to overuse.

Tim, thank you for sharing! This documentation deserves to be collected into a printable PDF. I'd gladly put thia next to my HB making of books and props.
Click to expand...

Sorry about that - if it's any consolation, my notification bell is now broken as well

I can't say that I've ever created a PDF of anything before. I might look into that if I can find some time...

RPF PREMIUM MEMBER
Fantastic thread! Thanks for sharing your work and a lot of the process behind texturing/finishing!

RPF PREMIUM MEMBER
No problem - I aim to please

Your work is so awesome, I want it all. Thanks for sharing your work.

The dagger is looking great, the pommel in brass will look so nice and really add to look and feel.


breen2057 said:
The dagger is looking great, the pommel in brass will look so nice and really add to look and feel.
Click to expand...

Thank you - I'm rather pleased with how it's progressing myself. The pommels will be cast in bronze - I asked a former co-worker to do them for me, as she has a foundry setup in her home workshop. I actually asked her about casting in brass, but apparently it generates a lot of nasty smoke when it's poured. You can get bronze in various shades, so yellow bronze it is (the bronze edition of the corpse resurrection amulets were done in yellow bronze).

RPF PREMIUM MEMBER
Holy Wow!
That was an absolute joy to read through.
The word "Impressed" falls short, sir.

squidsicle said:
Holy Wow!
That was an absolute joy to read through.
The word "Impressed" falls short, sir.
Click to expand...

Why thank you - I'm glad you enjoyed it.

Here's something that some of you might find interesting - I molded the main body of the pommel in Smooth-On SORTA-Clear 40 translucent silicone: 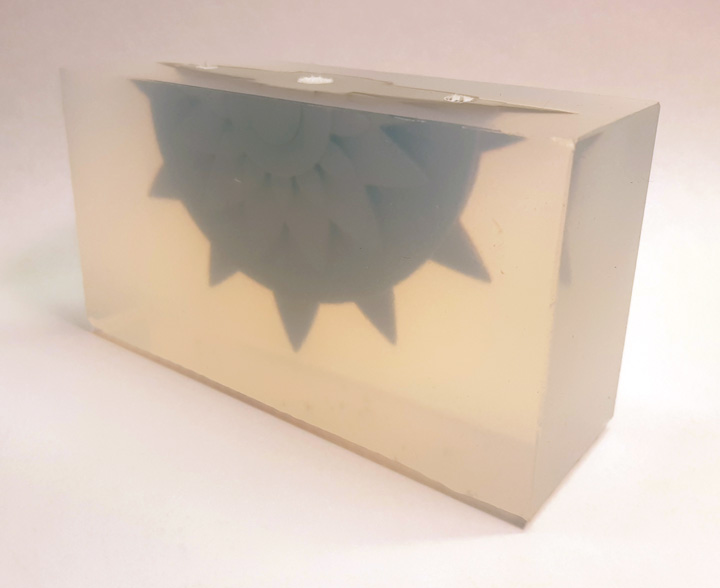 The idea being that it will be easy to see if there are any trapped air bubbles when it's filled with molten wax. The mold will also be hot when I do the wax casting - it will be in a water filled sauce pan on a hot plate. That way I'll have time to work out any potential air bubbles before the wax hardens.

RPF PREMIUM MEMBER
I handed off the wax parts yesterday... 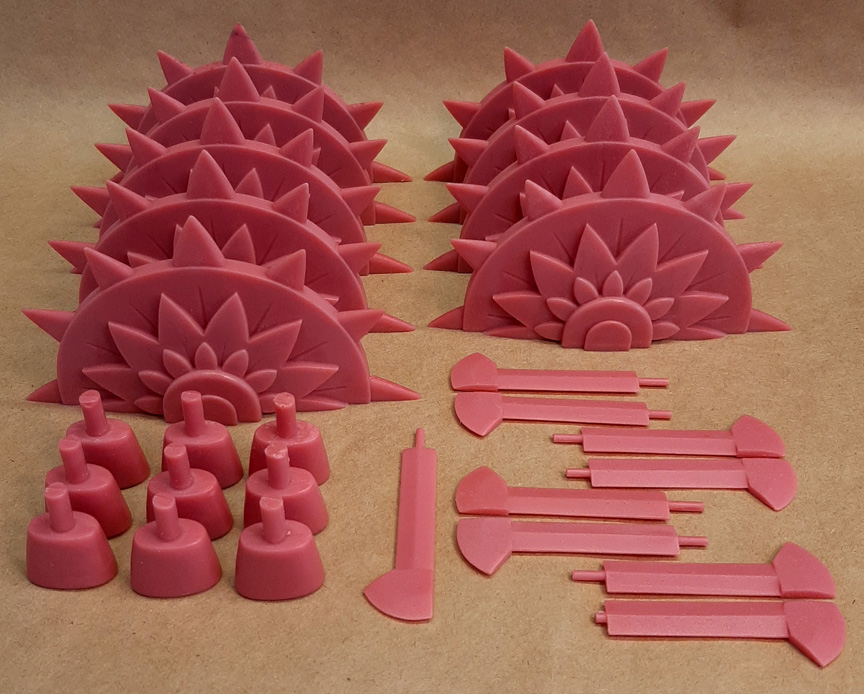 RPF PREMIUM MEMBER
So while I've been waiting on the bronze castings, I've been tinkering with another small project... this was another one of those things that had been rattling around in my head for quite a while and which I finally decided to actually do - the wax seal of the Osiris Club, as seen on an envelope delivered to Hellboy in the first issue of "The Wild Hunt," first published in 2008.

It appears on the cover of issue #1, as drawn by Mignola. 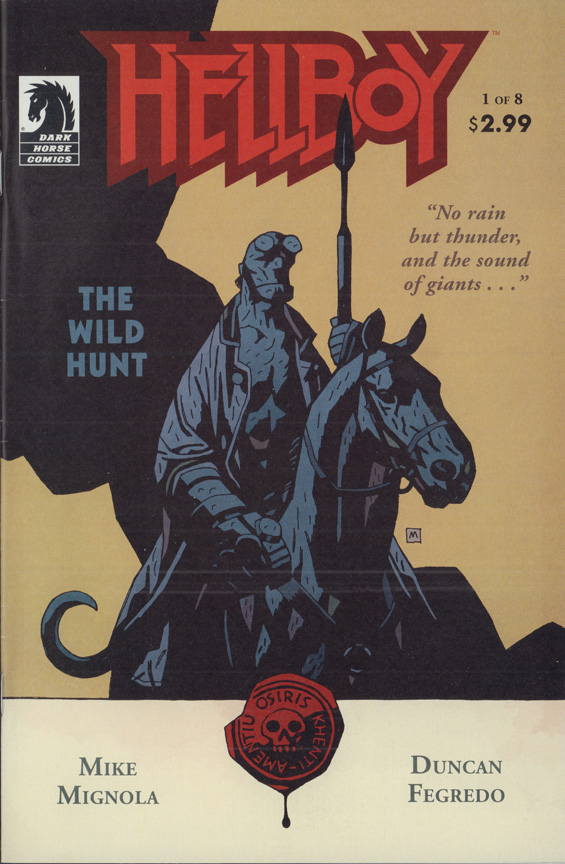 The version drawn by Fegredo in the story is a bit different in its details, and I noticed that he mis-spelled "Khenti-Amentiu" (he forgot the T in Khenti)

I much prefer the style of Mignola's seal though, so that's the one that I went with.

I had actually first started to think about doing this piece many years ago, and had found a company that did custom peel-and-stick pre-fab wax seals (in addition to offering traditional wax seal stamps + supplies). I lost the bookmark to their site in a computer data loss though, so I had to start all over with a new google search - I found a couple companies that offer the same service, but I didn't find that old company (at least not as I remembered it).

I scanned the cover image of the seal, adjusted the brightness and contrast, and printed it out at a very large size. I then traced both the stamp design and the shape of the wax "blob" by hand, using tracing paper and Sharpies (I have Photoshop, but I don't have Illustrator). The wax seal company that I chose will also do custom "wax blob" shapes for peel-and-stick seals if you provide them with the artwork for that, in addition to your stamp design. 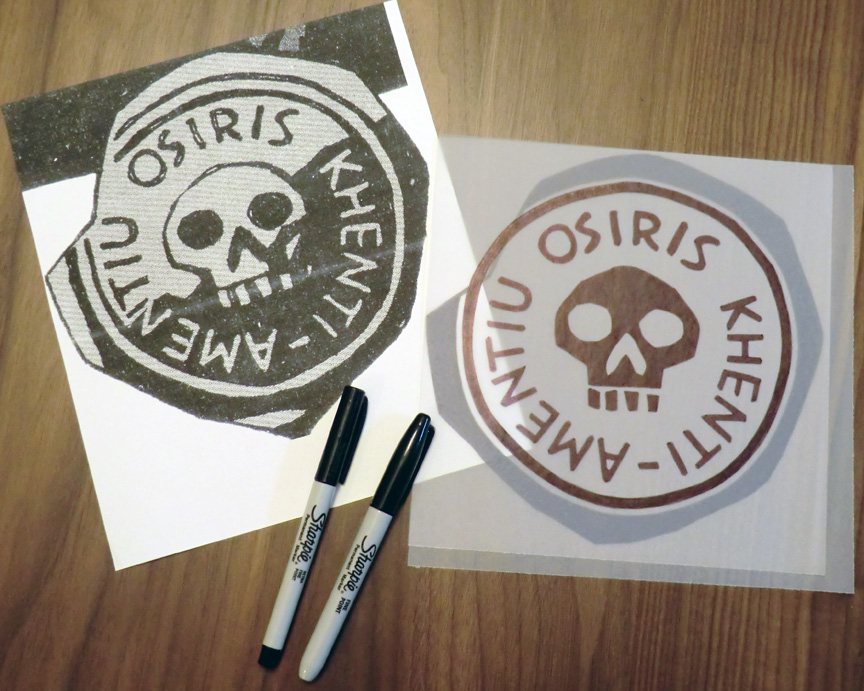 Then it was just a matter of scanning my artwork back in and cleaning it up a bit on the computer, before emailing it to the company after placing the order.

While I was doing the artwork for the seal, I figured that I should probably think about the envelope as well. Plus, I needed to know how big the seal should be when I placed the order. 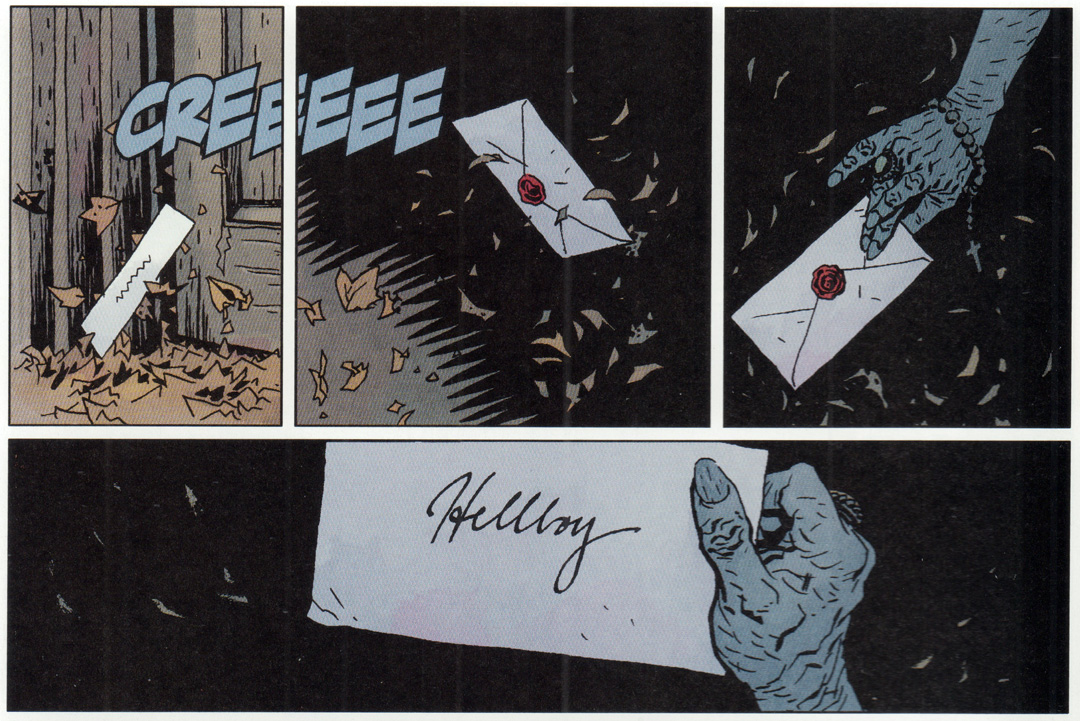 Looking at the envelope as it was drawn in the comic and doing some scaling calculations based on a "standard" business envelope, I quickly came to the conclusion that the proportions of the comic envelope were definitely different. And that sent me down a rabbit hole of all the various shapes and sizes of envelopes that I had never heard of, or even considered in my daily life.

After a bit of googling (and more scale calculations), I discovered that the dimensional proportions of the comic envelope very closely matched those of a "Monarch" size (or # 7 3/4) envelope - 3 7/8" x 7 1/2"

That sounds about right, within the context of the story. So the fact that the proportions of the envelope match those of a Monarch was either a coincidence, or it means that Fegredo had this in mind and drew a Monarch envelope. Weird!

So I printed out the "Hellboy" that was handwritten on the envelope in a large size and traced that as well, and then scanned it back in so that I would have a clean digital image of it. 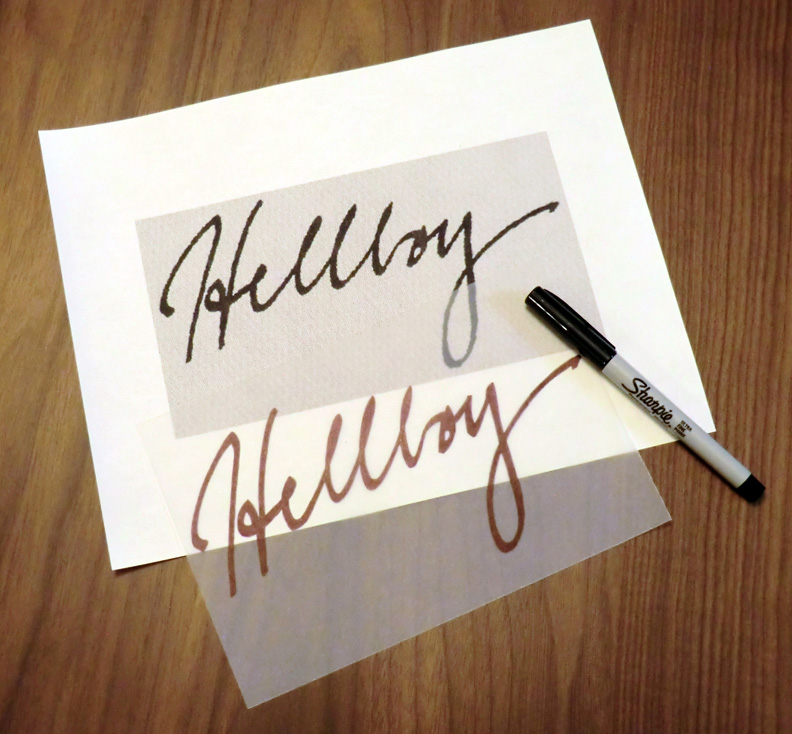 Since my home laser printer doesn't do envelopes, I had to come up with an alternative solution for printing it. So I bought some Monarch envelopes and pulled one apart, and unfolded it so it was flat. The dimensions of the unfolded envelope shape were larger than an 8 1/2 x 11 sheet of paper though. However, the copier/printer at work also does 11 x 17, which was definitely large enough. So it was then just a matter of tracing the shape of the unfolded envelope and scanning that as well.

Next was deciding what color paper to print it out on - plain, stark white didn't seem like the right choice, even though that's basically what it looks like here: 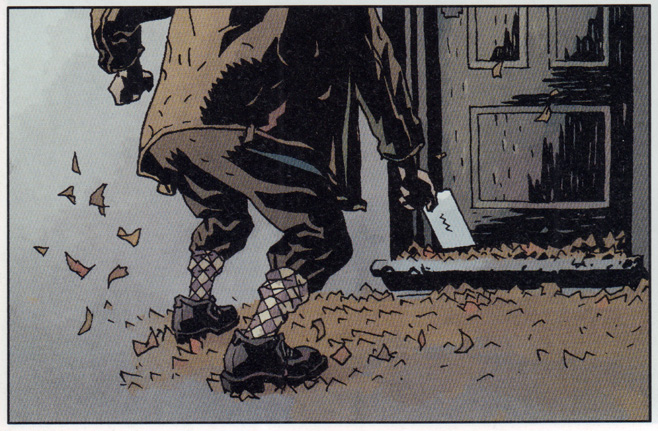 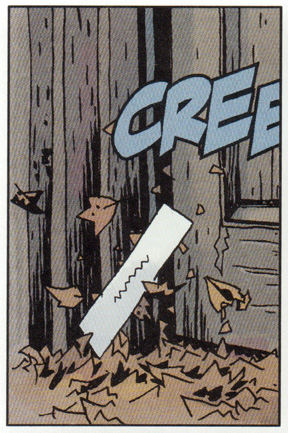 After I printed it out, I cut along the outline of the shape and then folded it into an envelope, gluing it together with a simple glue stick. 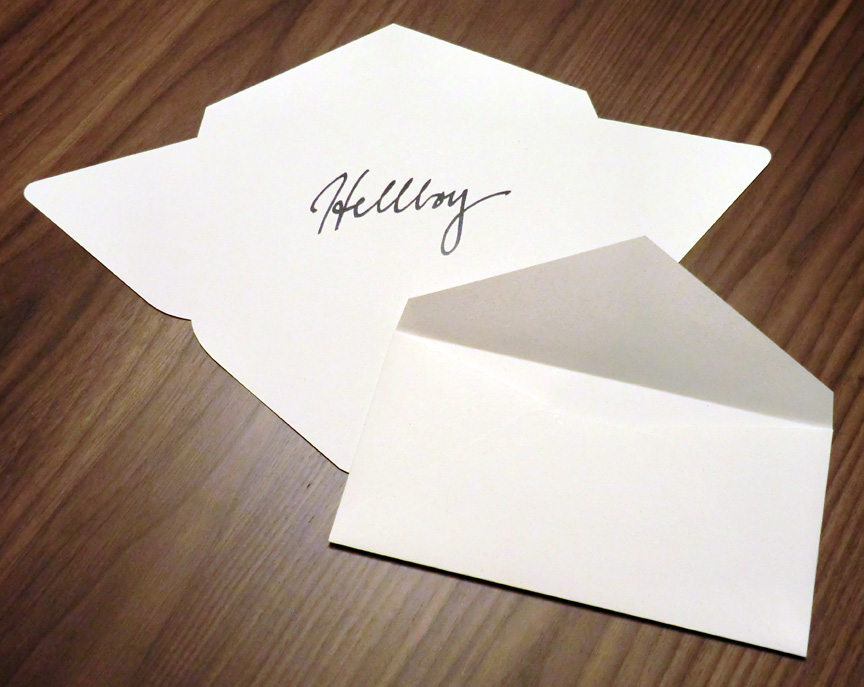 Before closing it up and sticking the wax seal on, I thought perhaps a folded piece of paper inside would be in order. But of course I couldn't leave well enough alone, and just use a blank sheet of paper... should anyone ever open this envelope after I'm dead and gone, they'll get a little surprise. 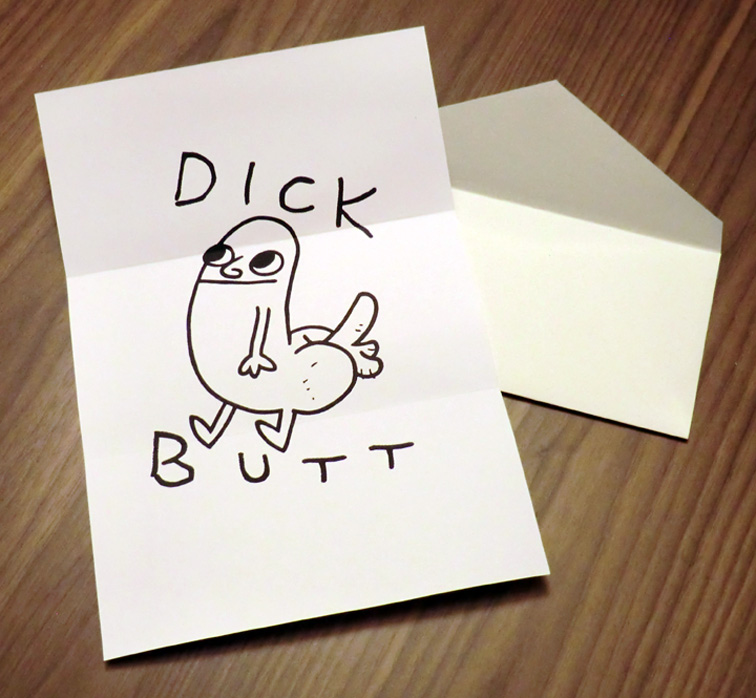 I couldn't leave well enough alone with the wax seal either - I gave it a thin wash of black, burnt umber, and a touch of cadmium red oil paint to provide a little bit of contrast. 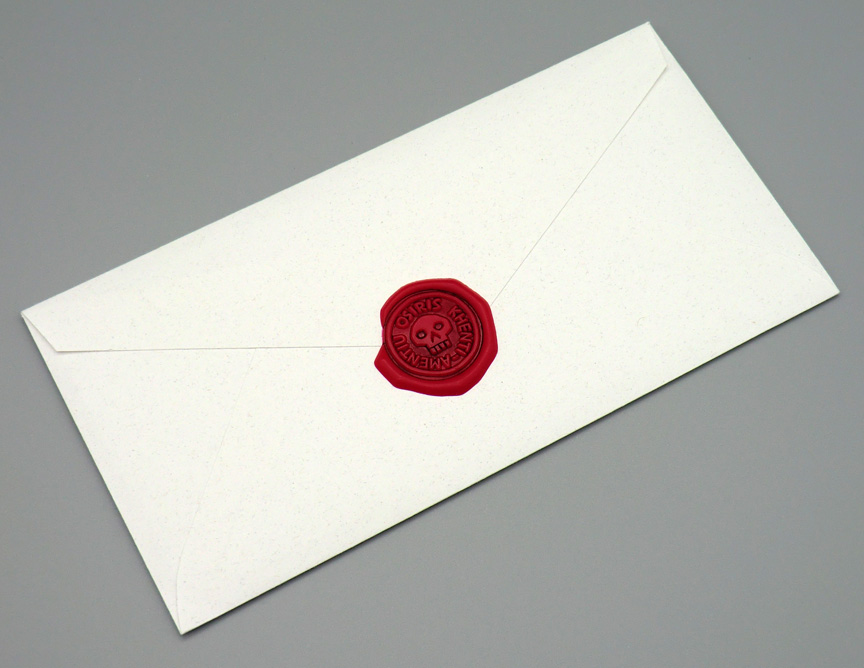 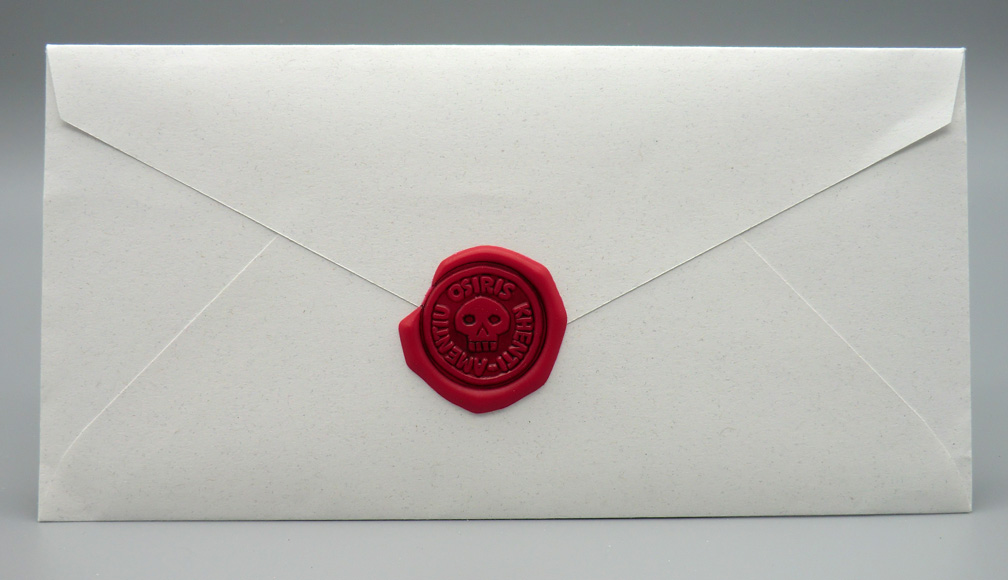 And that's another piece crossed off the To-Do List.

RPF PREMIUM MEMBER
Top notch as always! Thanks for sharing!

satchel with a flavour of Indiana Jones