PLEASE – this is a reference thread. IF you want to comment, discuss – anything – then Please use this companion thread:

I came to The RPF looking for info on whether the fabled triangular blade was real or not as all the pictures I’d seen of ANH sabers had round blades.
I found a lot of tantalizing hints in the posts but little in the way of links to source references, those I did find were scattered over many disparate threads.

My aim in this thread is to bring together every available primary source in one place.

Only contemporary photo’s or film clips.

Only quotes from people who worked on ANH.

Only contemporary documents or photo’s of same.

AND where this information came from.

but please no ‘I read somewhere...’ ‘ I heard that...’ ‘everyone knows such & such’. If you must post those do so on the companion thread. I have put two such pictures on there already.
Thank you in advance.

Note: Each reference has its own ref. #. eg. - QT 1 - to allow forum users to give a short, full ref to the material here.

Caution : Please pay attention to the date of these quotes. They may suffer from what I term memory drift. It takes app. 2 yrs for a memory to become ‘permanent’ during which time it is rewritten multiple times & can become subject to external influences, so the closer the quote to the event the better & even then may already be starting to drift esp. if the person concerned is busy with other related stuff.

In short all quotes should be taken with a pinch of salt.

Just one reference so far – a quote from Gil Taylor here :

The return of old-style props in movie making

I found it on this thread:

...And it's not just fans who are sick of implausible and plasticky CGI. Gil Taylor was the cinematographer on the first Star Wars back in 1977. In fact, he's the man who made the lightsaber glow. "It was very do-it-yourself," he says. "The lightsabers were just triangular bits of wood which were covered in reflective material that I projected a spotlight on to. They've gone over to digital now, which I never used and I don't believe in. Personally, I'm incredibly bored with those effects; they've taken over everything.


I have seen many references to a discussion/s on this forum about the triangular blade but apart from the above referenced thread have failed to find it/them.

If you know where they are please add a link to them.

‘On a hunch I dusted off my copy of "Star Wars scrapbook" by Stephen Sansweet, and found what I was remembering. It was a replica of the "official Star Wars fanclub newsletter" #1 from 1978. (This publication would later be renamed "Bantha Tracks")
Transcribed from the book by me below.’

The problem of getting the Light Sabers to work fell upon
Special Production and Mechanical Effects Supervisor
John Stears.

The 'blade' part of the Light Saber is actually a four-sided
blade attached to a small motor in the handle. The motor
is used to quickly rotate the blade.

Two sides of the blade are coated with a highly reflective
material similar to the material used on motion picture
screens. One of those two sides is painted four inches
higher than the other side. When spinning, this gave the
blade its flashing effect.

A device was made to lock a light source onto the camera,
allowing the camera both to move freely and to be aligned
with the light source and the blade's reflection.

The film was then taken to a special effects house and
rotoscoped, an animation process involving the frame-
by-frame drawing of previously photographed live action.
this animation process added brightness, flash, and
color to the Light Saber blades.

I would need to check my research for specifics, but I looked into this when writing an article for the Insider awhile back. My determination from several period interviews was that the ANH blades were square - two sides coated, two uncoated.

Unfortunately I haven’t found any more from lonepigeon regarding these ‘specifics’.

During my conversations with Jon Bunker (the person I got my lighsaber blank from back in 1997, he was involved in the making of the original stunt lightsabers from ANH) he said that they experimented with triangular blades for ANH, but went with square (wooden) blades for the shooting…

Had a phone conversation with Jon a minute ago and asked him again about the stunt lightsaber blades used in ANH. He does not remember billard/snooker queues. He does remember lightweight (balsa) wooden sticks, painted black, and then covered with scotchlite partially. And those were round, not square. The blades were designed to break to minimize the risk of injury to the actors.

A mess, really...when I asked Jon about a taper on the balsa blades he said they weren‘t tapered...

Cmon, at least the Luke Graflex stunt has a tapered square or triangular blade…

Has this memo been discussed before? It mentions the lightsaber blades. 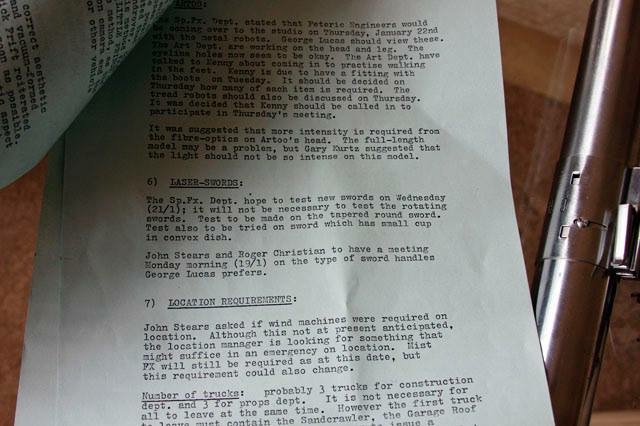 The Sp.Fx. Dept. hope to test new swords on Wednesday (21/1) [Jan 21st] ; it will not be necessary to test the rotating swords. Test to be made on the tapered round sword. Test also to be tried on the on sword which has small cup in convex dish.
John Stears and Roger Christian to have a meeting Monday morning (19/1) on the type of sword handles George Lucas prefers.

Transcription of what Peter Diamond has to say (about blades only) in Empire of Dreams (VC7 below). Documentary released 2004 (& on bonus disc in the 2004 boxed set) :

‘… the first swords were bits of wood with front-projection material wrapped around them...’

‘… I had to teach them, if that was the sword [gestures], to stop before they touched ‘cause blades were breaking – we bloke… broke so many blades - they just kept snapping...’

Note: there are edits throughout Peter’s commentary so what you hear said maybe cobbled from different parts of his actual conversation.

Transcription of what Mark Hamill & George Lucas have to say in Star Wars Featurette The Birth of the Lightsaber ( also VC 9 & 10 below ) Released 2004 as bonus disc in the 2004 boxed set :

‘… the effect of the light saber was basically a rotating pole that had movie screen material applied to it so that it would reflect its light source back at many times the intensity. The problem was that when you moved it out of a certain area it went from glowing and looking great to just a rotating pole.’

‘… [w]e rotated with reflective tape so that it would flash and it would create light on the actors [& all that], that never really worked, as soon as they hit eachother they broke the lightsabers, so then we just used the sticks with reflective material in it...’

Transcrption of Marl Hamill in Mark Hamill and His Return of the Jedi Prop Lightsaber Reunite in Pop Culture Quest Clip . Brandon mentions the reflective blade material & Mark then describes how the ANH motorised saber was set up & mentions the blade.

‘… and as I understand it the blades were coated with a reflective material...’

‘… yeah it was movie screen material [Brandon ‘right’] because that reflects the light sources-source back at hundreds of times the intensity [B - ‘yes’] well you know – and you had a wire up your sleeve and a battery pack on your belt - so you you’d wa.. you’d go like this [holds hilt up at arms length] and freeze and they’d run in and put that pole, that you’re talking about, on it and then run out – just like they did the effects on ‘I dream of Jeannie’ or what ever – poink [clicks fingers] and pop pops in…’ [end of video].

Note: Wherever possible non-rotoscoped footage is referenced as this better shows the blade.

There is of course the 4K77 project – a restoration of the ANH to it’s original screen version only rendered in 4K which is the best screen reference available to date.

Please only add differing copies or better resolution clips if duplicating below scenes.

StarWarsSG – May 2015. aka the Rodger Christian video.

This is Pop culture version uploaded in Oct 2015, I have no other details of this video.

VC 2 : Unusual BTS duel clip with sound of blades clashing & sliding against eachother at end. From 11.00

Star Wars Featurette The Birth of the Lightsaber.

Star Wars Featurette: The Birth of the Lightsaber

Kurtyboy’s post # 155 pg8 – he provides these clips compiled from from the 4K77 ANH restoration project.

VC11 : This shows the blade rotating & the ‘emitter’ face static. It is relevant as it shows that the blade attachment method is independent of the emitter. (rendered here in 1080).

SG1 : The youtube video I took this from is no longer available it was 1080 versions of all Star Wars lightsaber duels. It shows flexing of OB1’s blade. 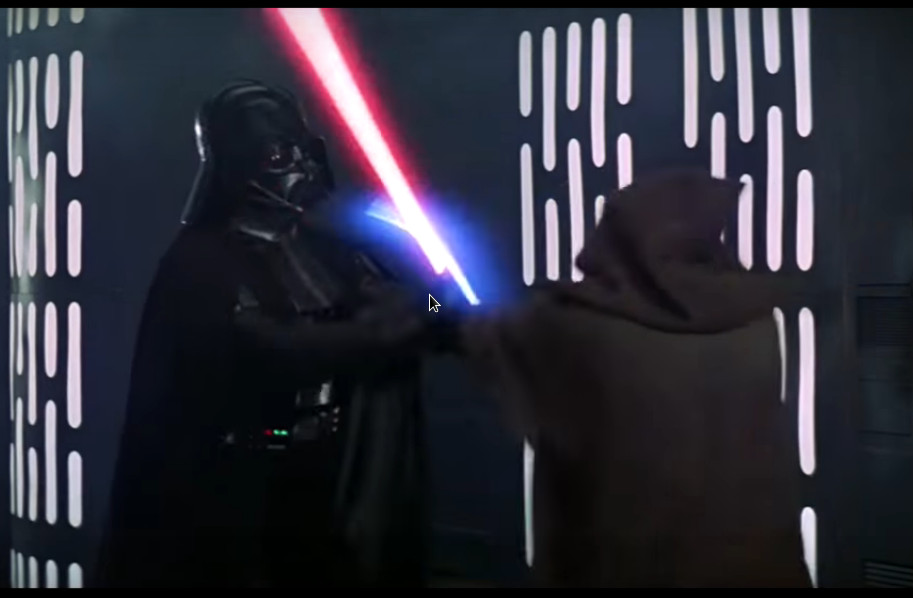 SG2 : Another from later in the same video as SG1 showing the same thing.

SG3 : Kurtyboy provided this for me - taken from the 4K77 project. Shows the infamous black line, but in a single unrotoscoped frame. 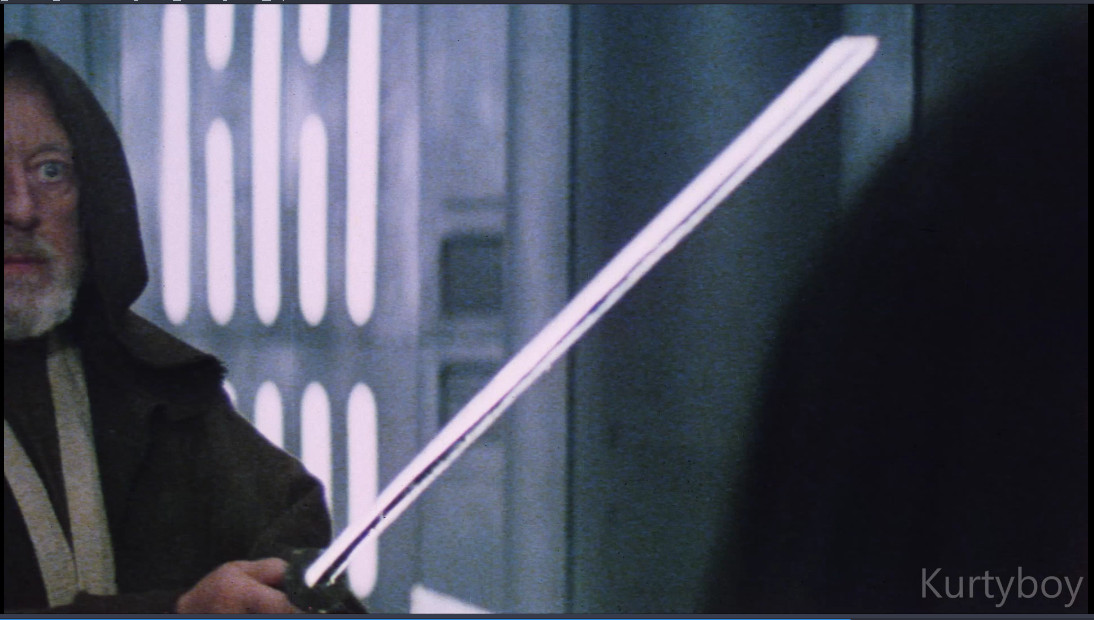 These are from my notes files & unfortunately I haven’t got precise notes of where I got each from. They are mainly from RPF threads & Pinterest. They should be self explanatory, I’ll not comment.

If you recognize one as supplied by you & you would like me to credit you (or remove it) please post your request on this thread. 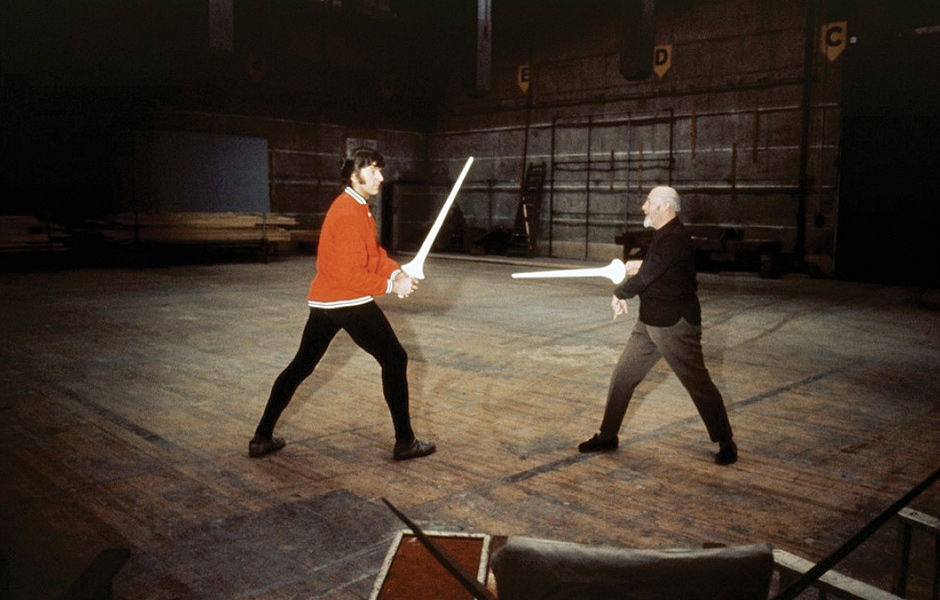 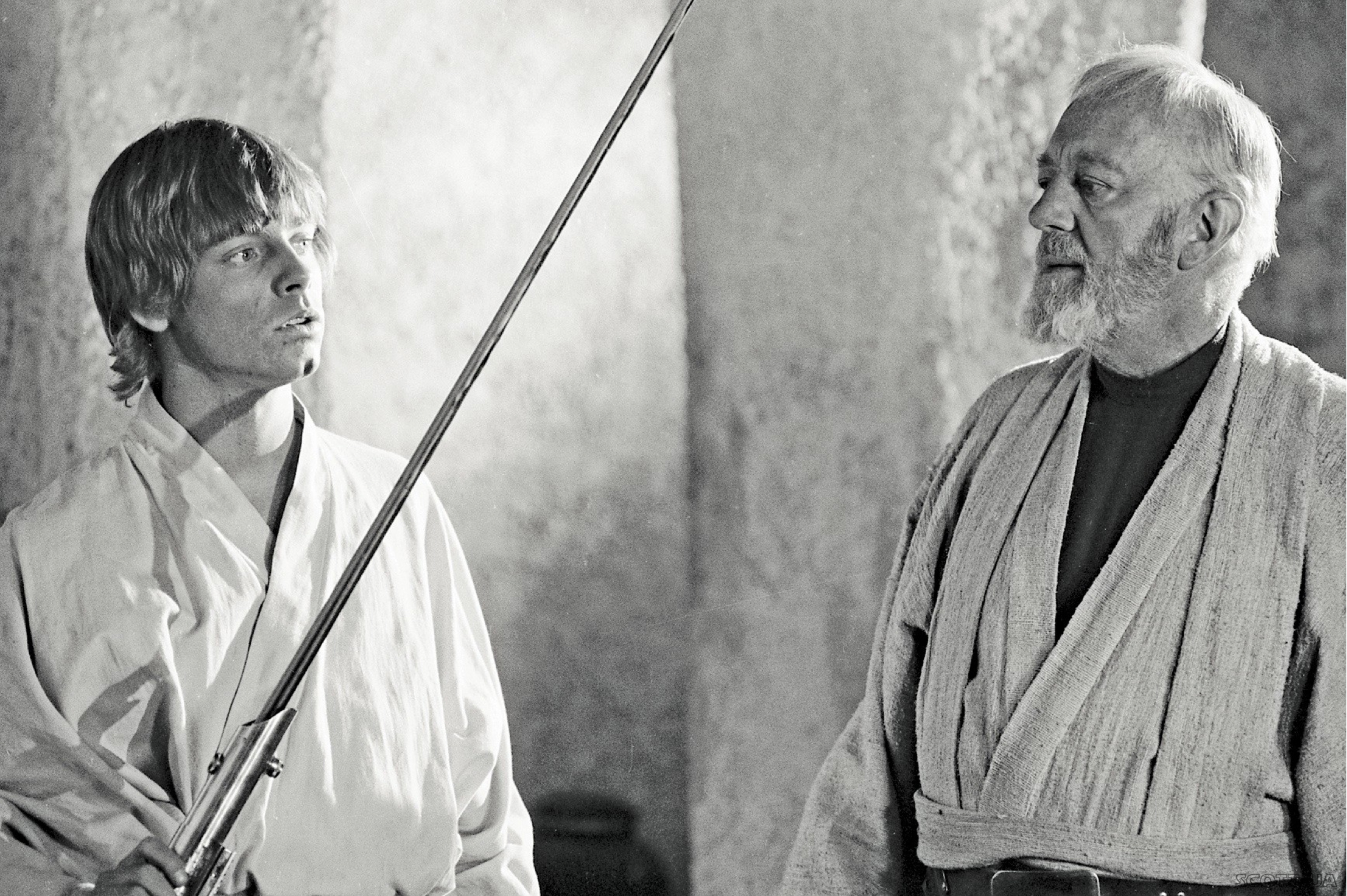 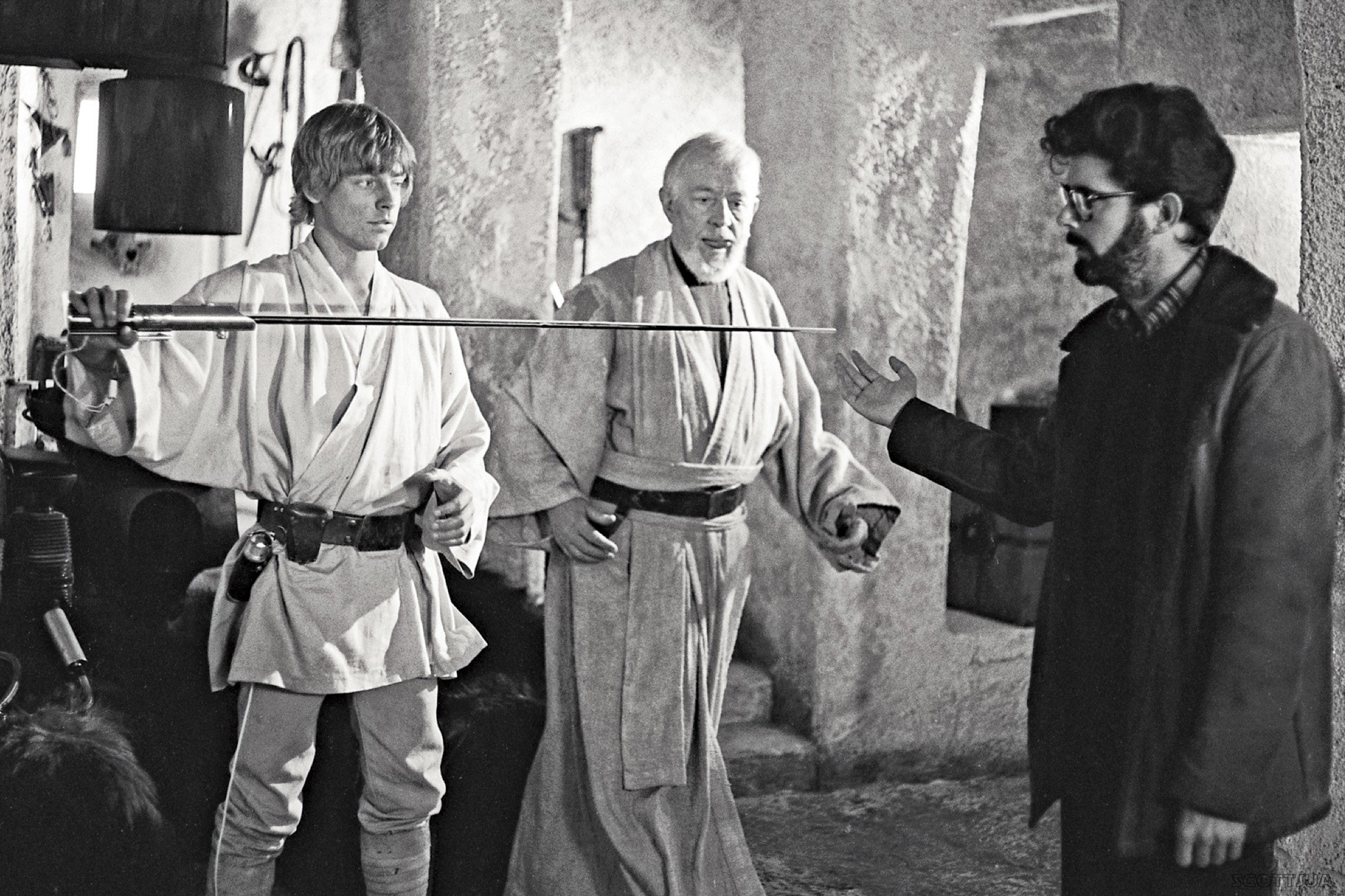 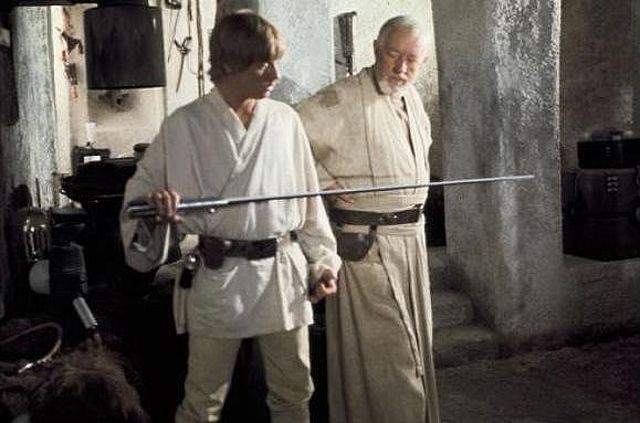 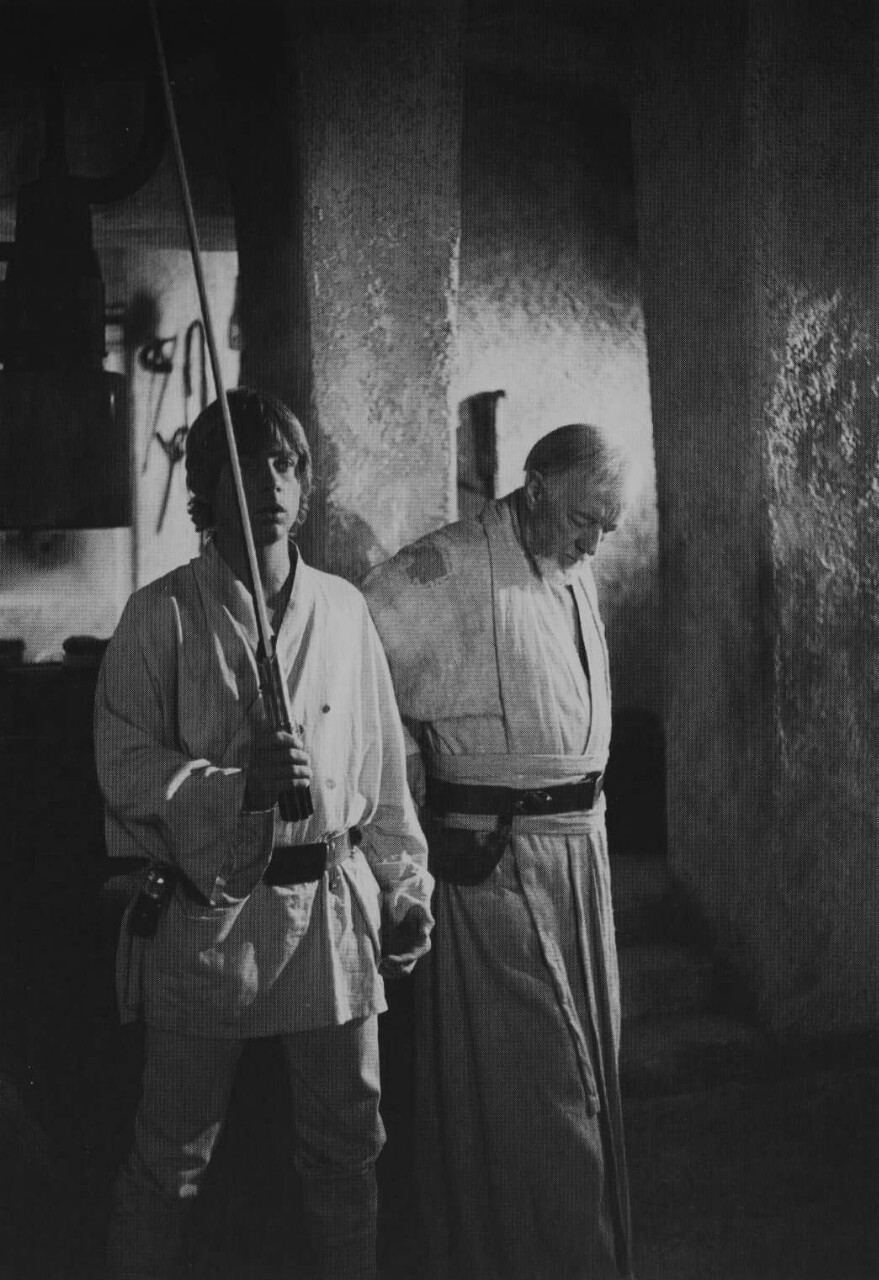 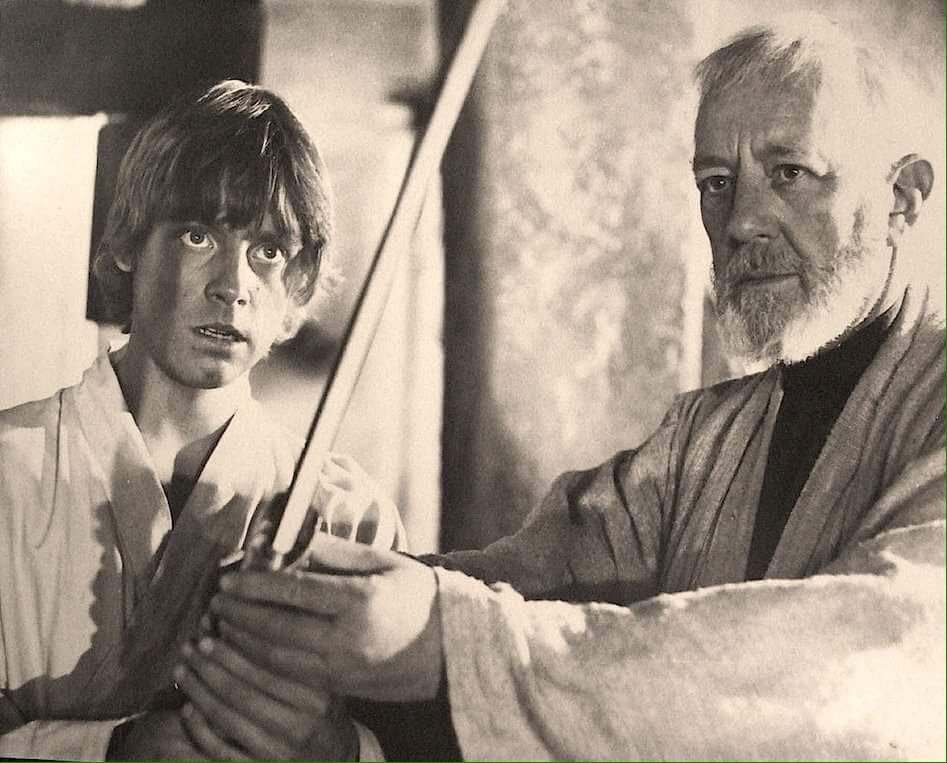 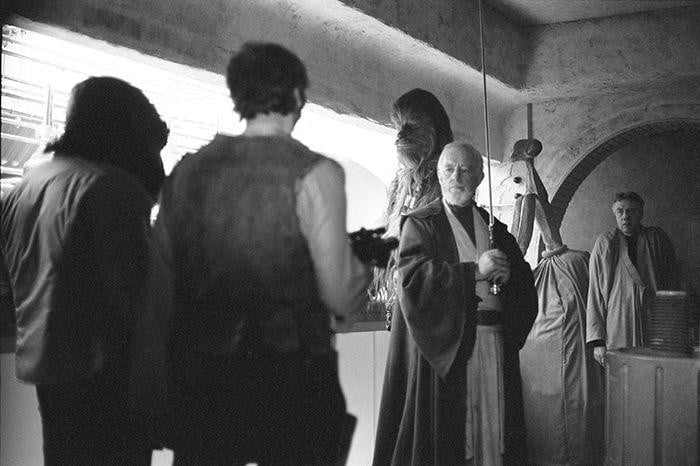 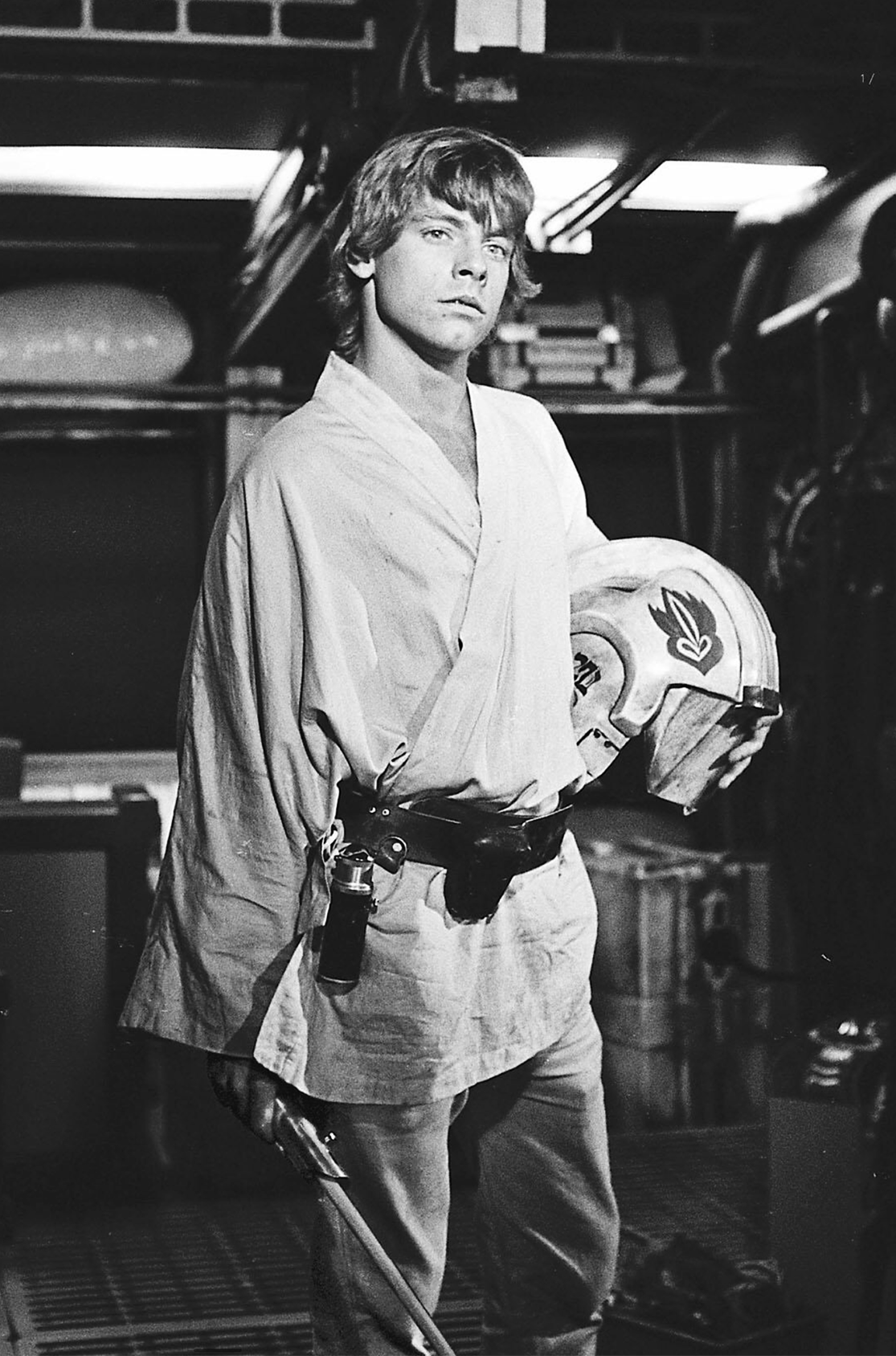 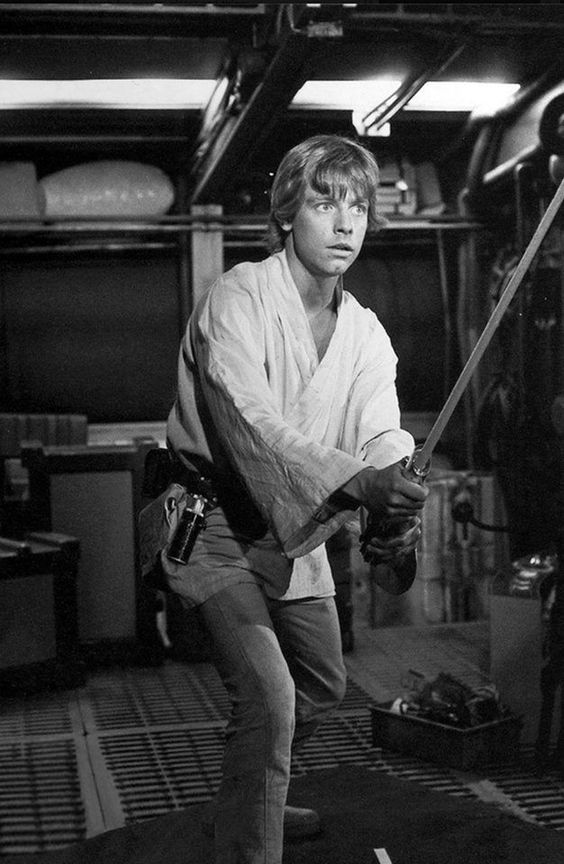 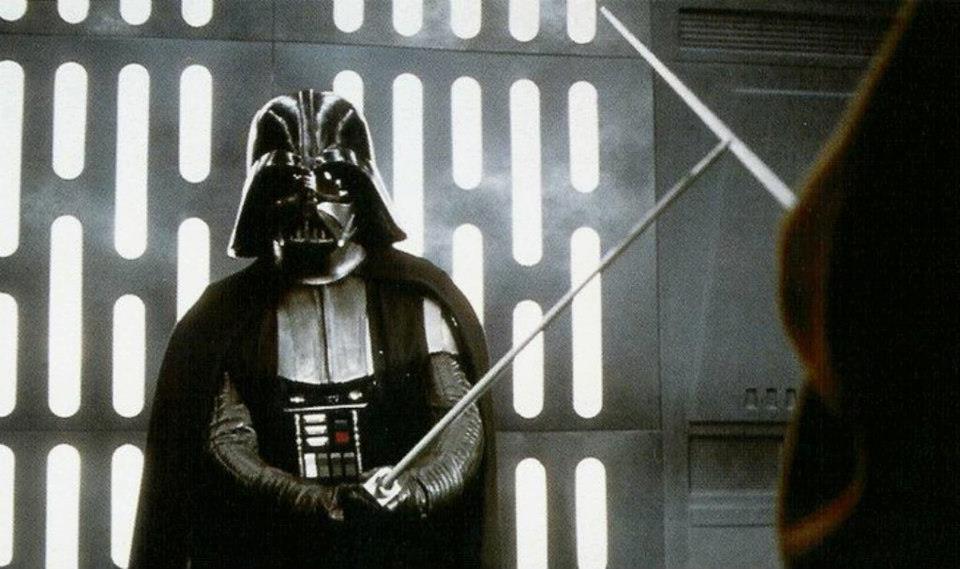 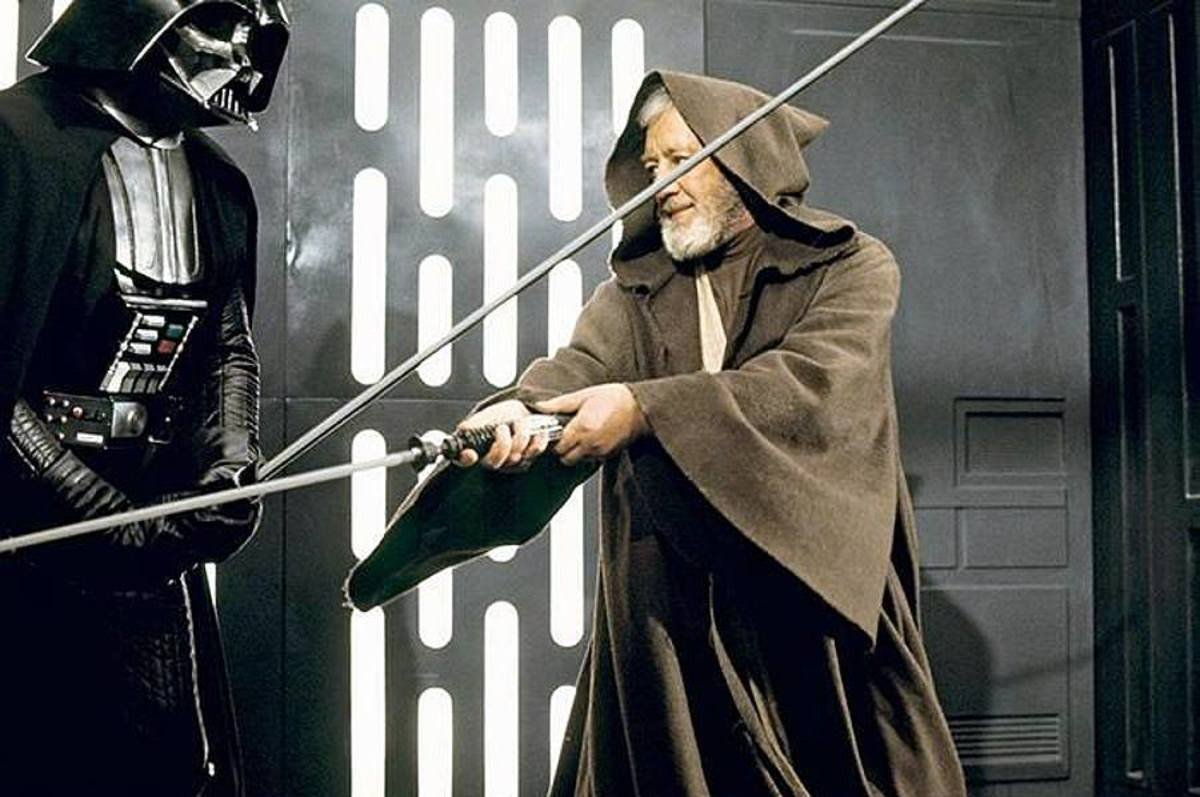 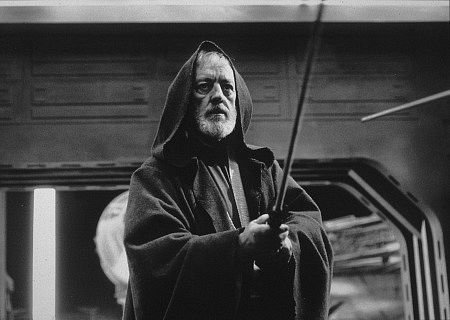 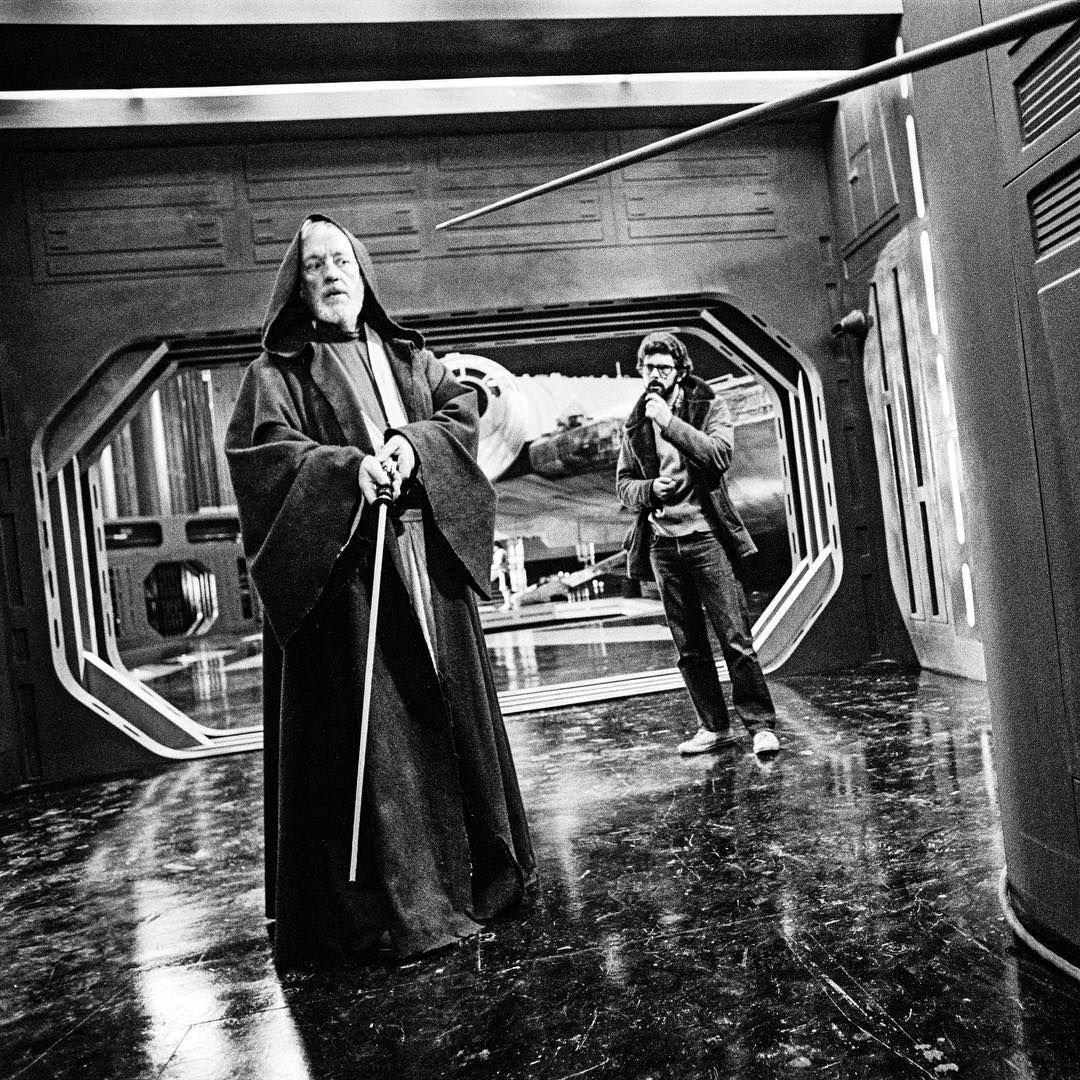 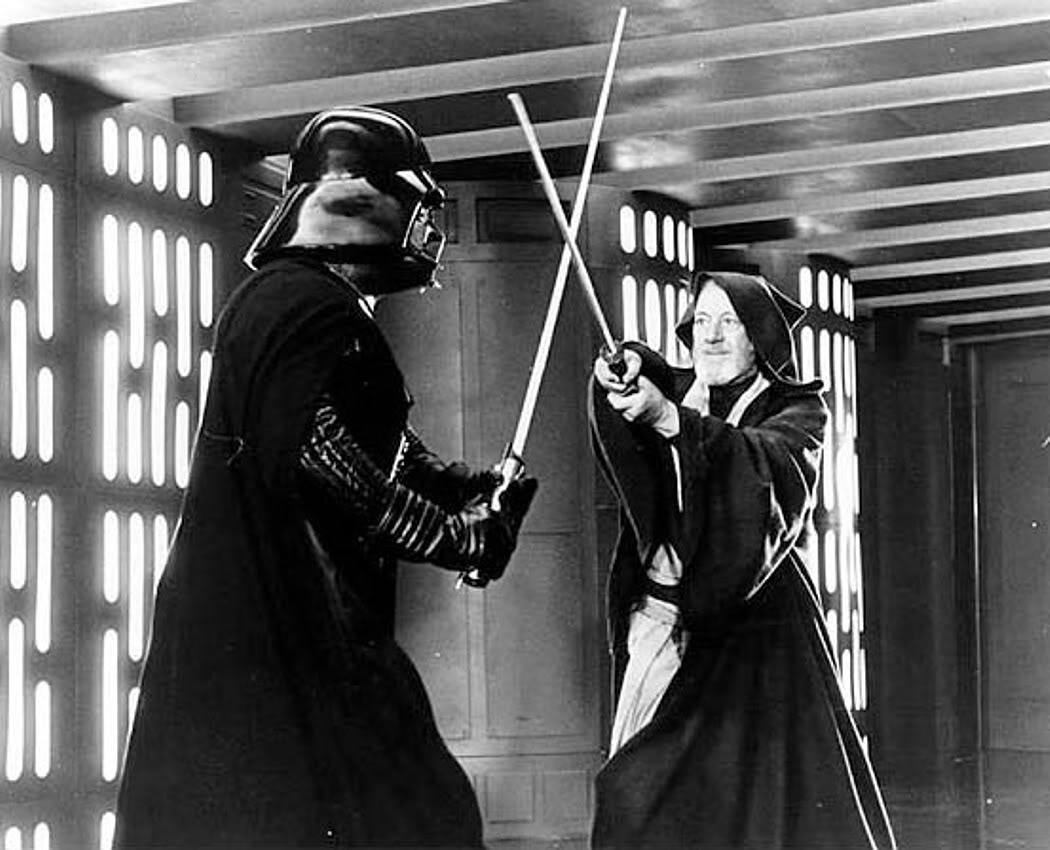 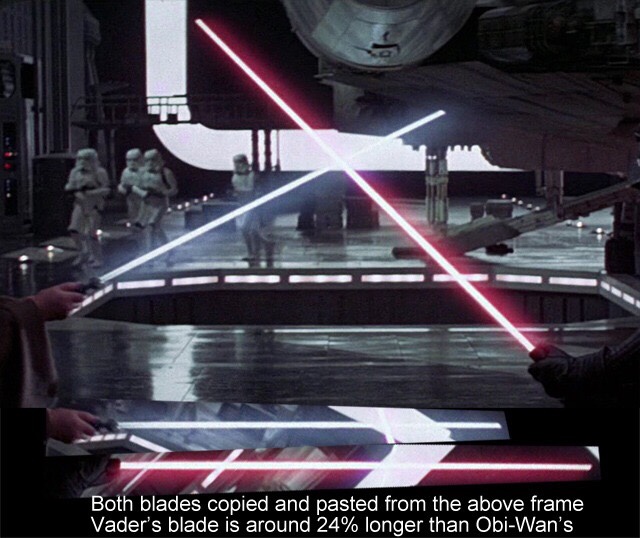 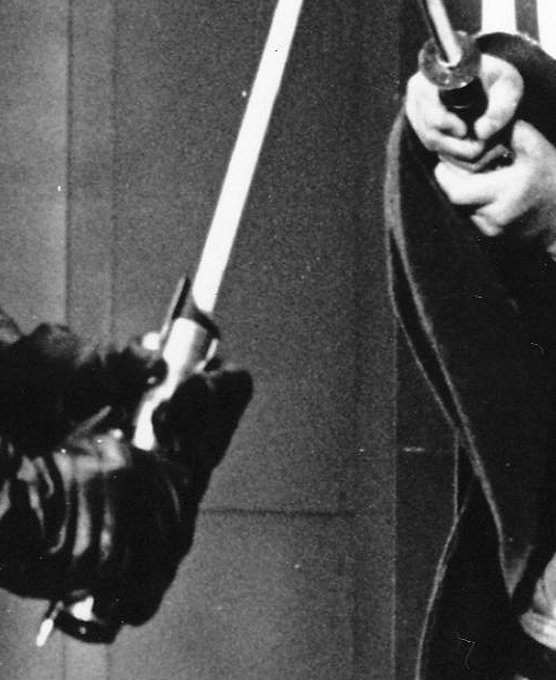 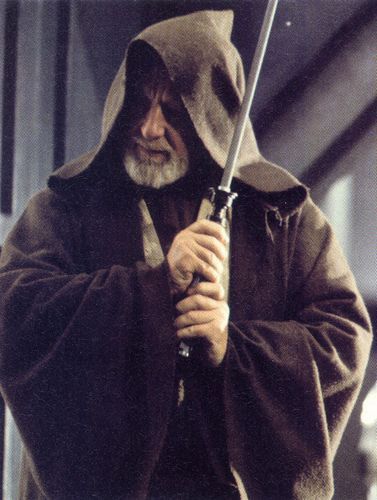 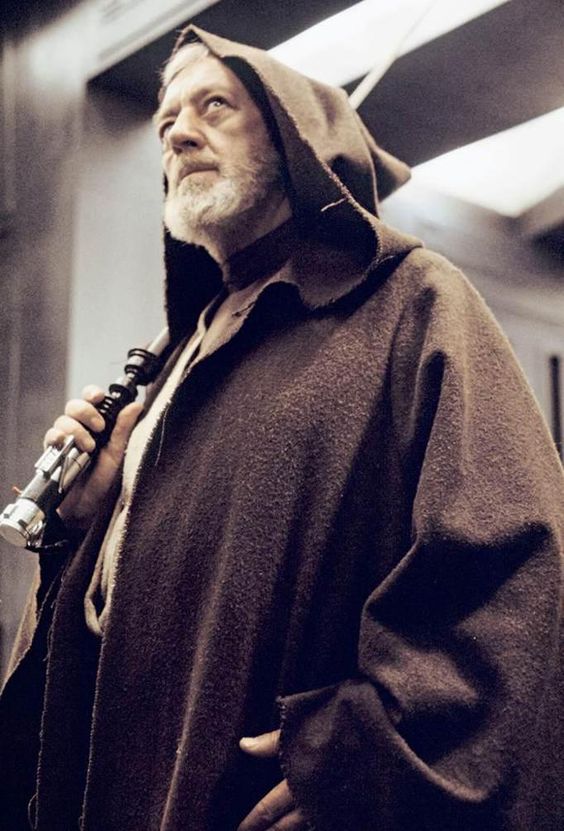 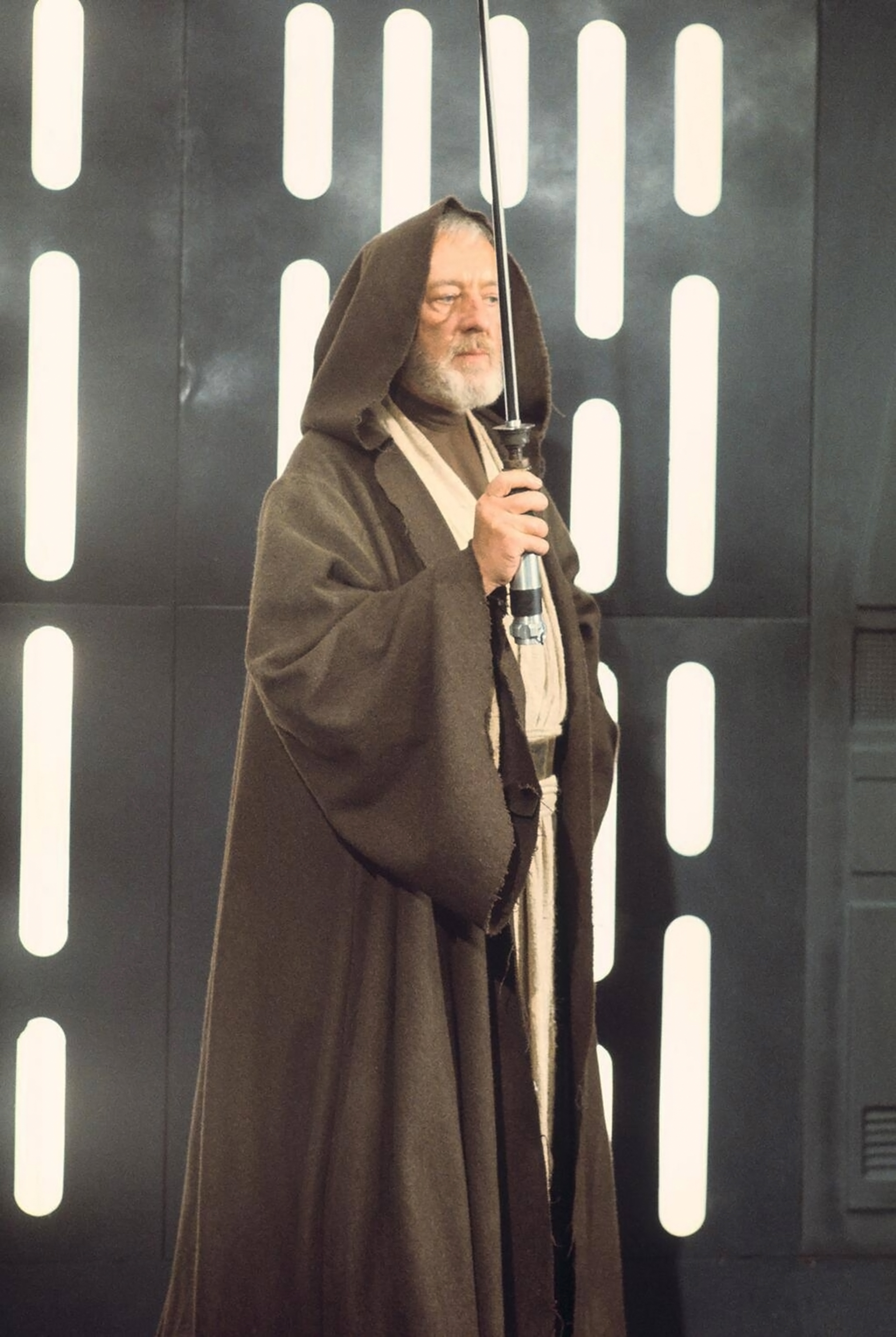 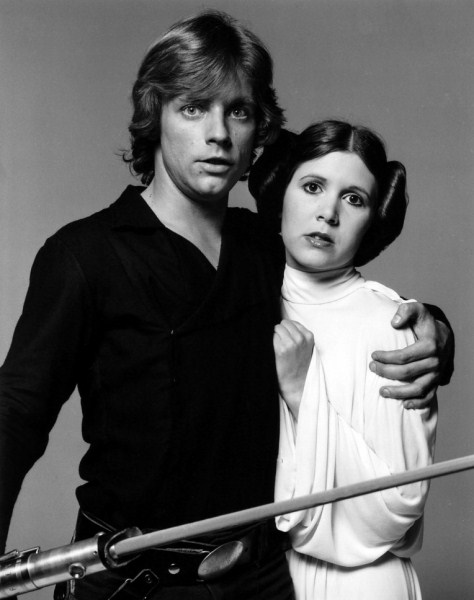 Good job I made some of those clips as 2 of the video's have been deleted from Ytube.

Very thorough post. I'm betting they used all three shapes at different time of course. It seems like most of the photographs appear to be round blades to me. There are a couple that I thought were questionable as to the shape. I would imagine that a non round blade would be more difficult to deal with and more likely to splinter.

The Jason's Light Up Original Lightsaber