The identity of these things has always bugged me, they show up in many places but to my knowledge they have not been identified. The vast numbers of them lead me to beleive they are from the derwent, but I haven't confirmed that. Lets see if we can nail down these obscure props.

In the last picture there are about 20 pilots each with 3 rods in their shoulder pockets, that means over 60 rods... These have to be a found item and not custom made, its just too much work.

There may be 60 pieces, but you only see the top two or three inches and not in any detail. It's not inconcievable that they just turned them. Get three lathes and that's just 20 units per lathe, and it's not a complicated piece to make.

I'm not saying that they are not found items, just that I don't think it's beyond consideration that they are machined. I'm looking forward to seeing what others have to contribute.
F

I have no idea what those rods are.
I really doubt that anyone actually machined them though.
My guess is that they are either a found item or a cast item.
It would certainly be easy to make a mould of one of theese items and cast as many as needed.
Scott

Well, we know for a fact that some of the Code Cylinders / X-wing pilot arm tools, were made from wood. And that info comes from close up pics from different exhibits of SW costumes. So in the late 70s it would have been pretty easy for someone to make a template for a wood lathe and turn a large batch of these with a little time. Now what was it originally, I donÂ’t think we know as of yet, but most likely a found part that was replicated in wood.

I seem to recall that one guy on here who isnÂ’t around too much lately, but goes by the name Elvis Trooper or something like that. Anyhow, if I recall correctly he made some replicaÂ’s that look a lot like these things form that Star Wars movie. And I see most of the people that dress up as X-wing pilots in the Rebel Legion seem to sport these nice aluminum metal rod things with their orange jump suits.

Hey what do ya know I found a picture. 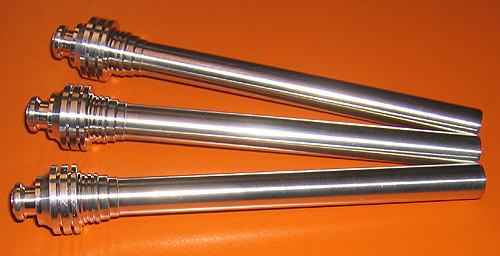 I think you might be able to contact this guy if you are interested in some of these, who knows, itÂ’s worth a shoot I guess.

Spoiler prop from Mando series finale. Do not read until you've seen it!
31 32 33