Firefly: A mid-bulk transport with a standard radion and accelerator core. 'Serenity' is an Aught Three, full class code being 03-k64-Firefly. There are 40,000 Firefly class vessels still in use.

With the recent release of this awesome sci-fi/western on DVD, I've gotten the bug to gather images and resources pertaining to this fantastic looking space vessel. Granted the ship was built almost entirely in CGI, but that doesn't mean one couldn't track down enough details to build one in studio scale... right?

I've acquired a few nice reference images, but would like to see if anyone else has additional details to help build this ship...

Recently I've only watched the first three episodes since they first aired last year, but hopefully I'll be able to gleen more details of this ship from the rest of the DVD set. So far I've noticed at least two different sets of markings used on the bow. One appears to be a test-shot or pre-production image using a logo made up of oriental characters, and the another being a production shot showing classic pin-up girl art like those seen on the fuselage of World War II aircraft.

Anyone have any thoughts on this? Any blueprinting experts or designers out there?

All in all I see this as being a rather challenging project -- but the payoff would be grand.
J

You got my moral support, dude! If you ever get a kit together, I'm in for one.

Also, there's a thread on the Firefly on Starship Modeler, which you've probably seen. Sounds like there are a couple of guys who have started their own.

RPF PREMIUM MEMBER
Did this project go anywhere? I'd love to see someone make one.

I would even love a small one, maybe 6" in length max, to have on the desk. Maybe rapid-prototype one off a CAD and cast/mold that badboy?

I just want a little one though - even 3" would be a good desk size. Like those SW Action Fleet size? Super sweet.

Alex Kung has my attention on this project..very nice so far. :thumbsup :thumbsup

I second that.
I'm thinkin somewhere around 1/144. That would put it around 16"
Plenty big for a complete and lighted interior/exterior B)

THis guy has done a downloadable 3D mesh of the Serenity. DOes anyone have the capability to turn this into a scale model using this 3D mesh? 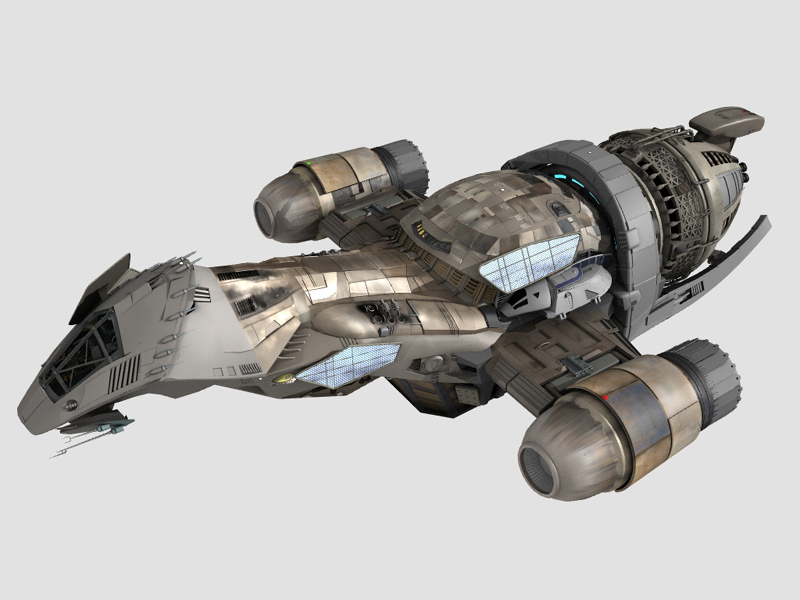 Sounds like a great idea for our SLA stereolithography folks to try on. Especially since it's always been a 3d model and not a practical model.

RPF PREMIUM MEMBER
Yes, they did do a SS model for the feature. It was used in the crash sequence.

Does anyone know how much it would cost to contract out some firm to do a Serenity using Stereolithography from the 3D model download referenced above?
C

Many problems with what you are suggesting.

First is that wireframe models are nearly always full of open holes. And this beast is hard to find them things in. It takes an incredible amount of work to get fan made meshes to work for STL.

Second is to SLA a large model is EXPENSIVE. I guess several thousand dollars.

Third, you will be hard pressed to find a rapid prototyping firm that would do it without written permission from Univeral or whoever owns the intelectual property rights.

I do believe the model being made in the link above is using this mesh as a basis for his hand work. That really is the best approach.

And just an FYI. Sean, the gentleman who made this mesh, is doing it all over again on the Lightwave forums as a tutorial. You guys should really take a peek at what he is doing with that. His approach isn't too far off of what you need to do to build it for real.
C

Here is that forum thread I was talking about;

coby... thanks. i learned more from your post about stereolithography than i ever knew before. thanks much.

Dear Budda,
Thats the one I want...and a pony.

1/144 scale sounds great. I'm definitely interested in this project. What do you guys think the cost of a built-up, painted model would be? ~$800? Or would you prefer a cheaper kit?

Dear Budda,
Thats the one I want...and a pony.

I had no idea it was THAT big. :eek

I'm looking into making this, but would studio scale mean 9' long? :eek