Have I mentioned, that Predators with axe don`t need blade-gauntlets?
Sometimes less is more ... 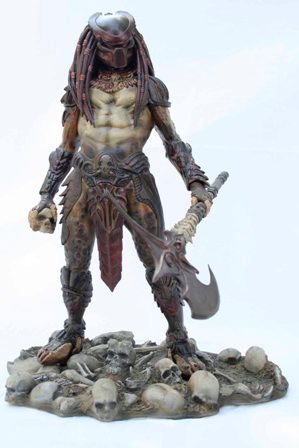 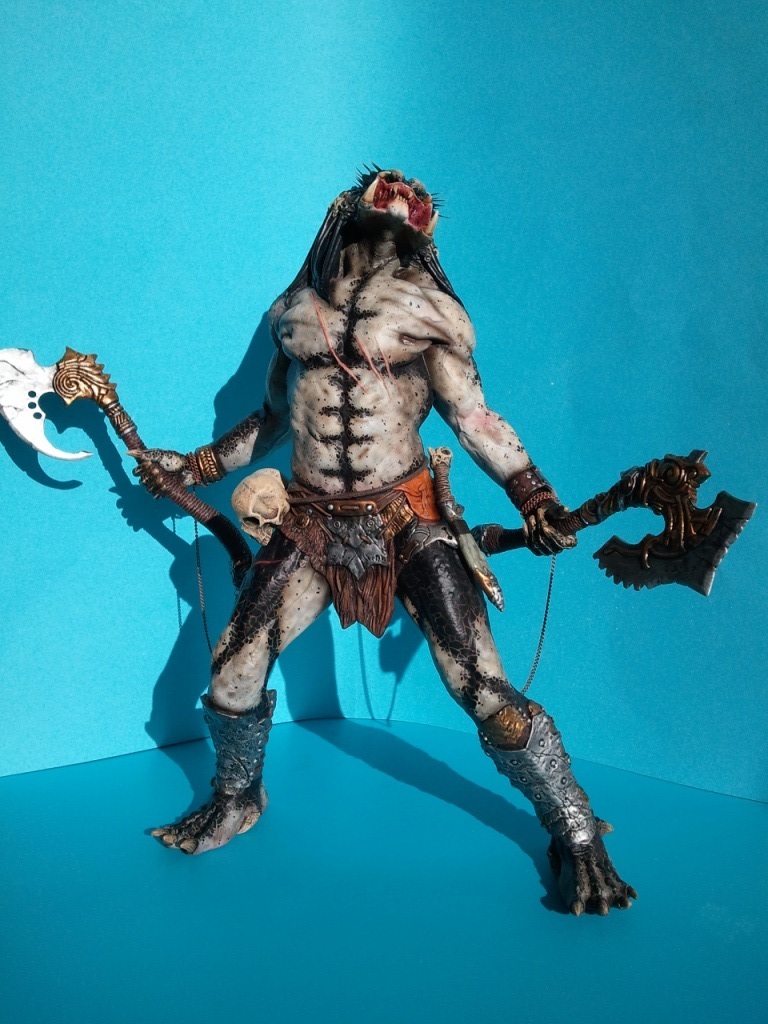 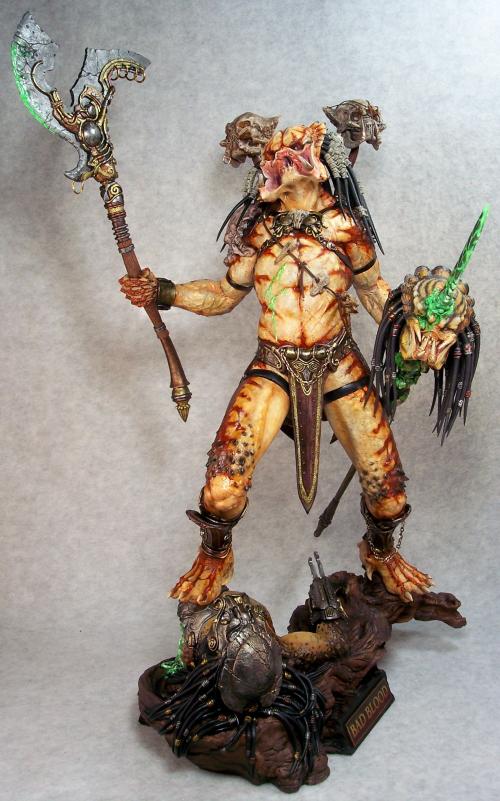 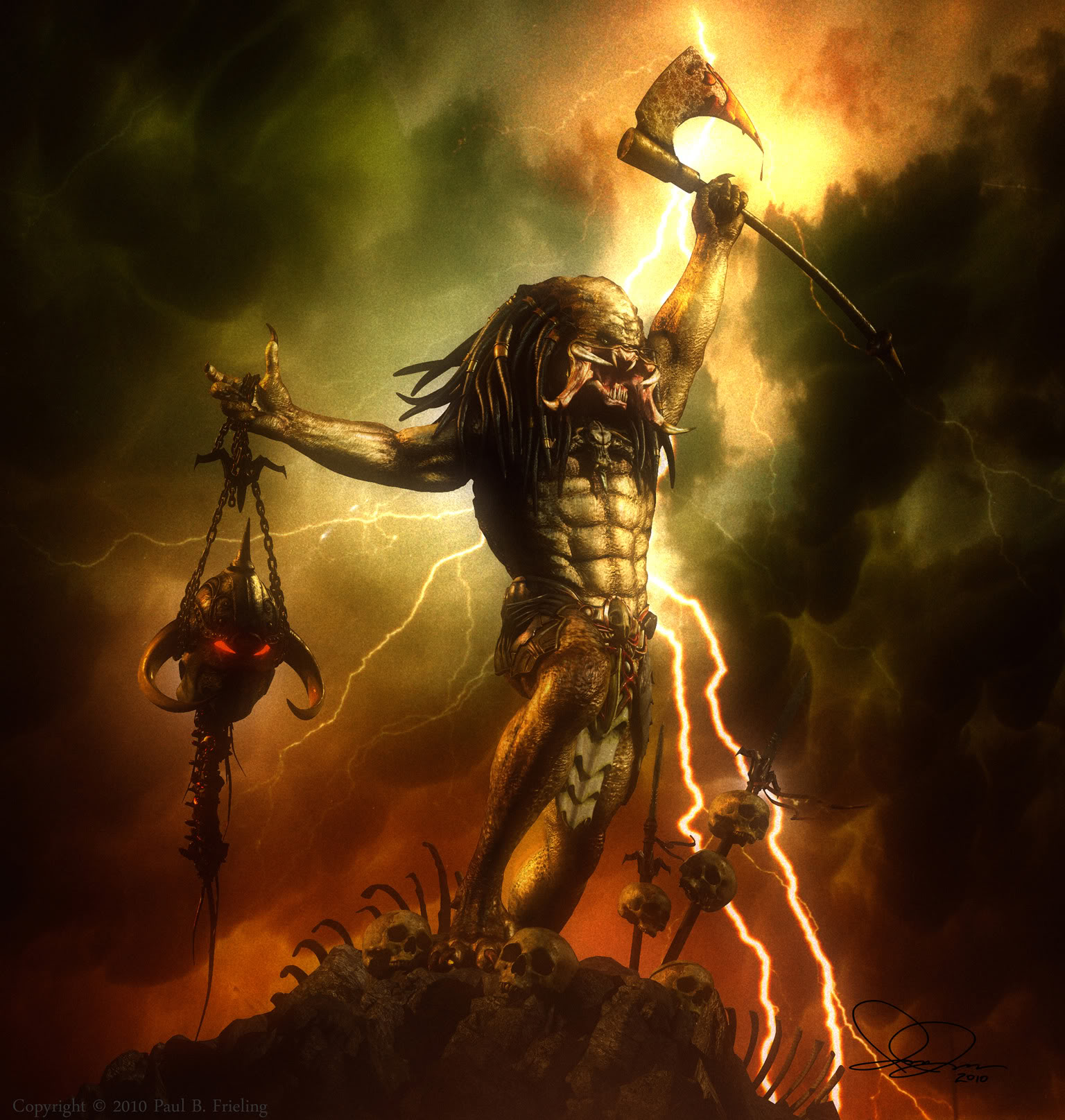 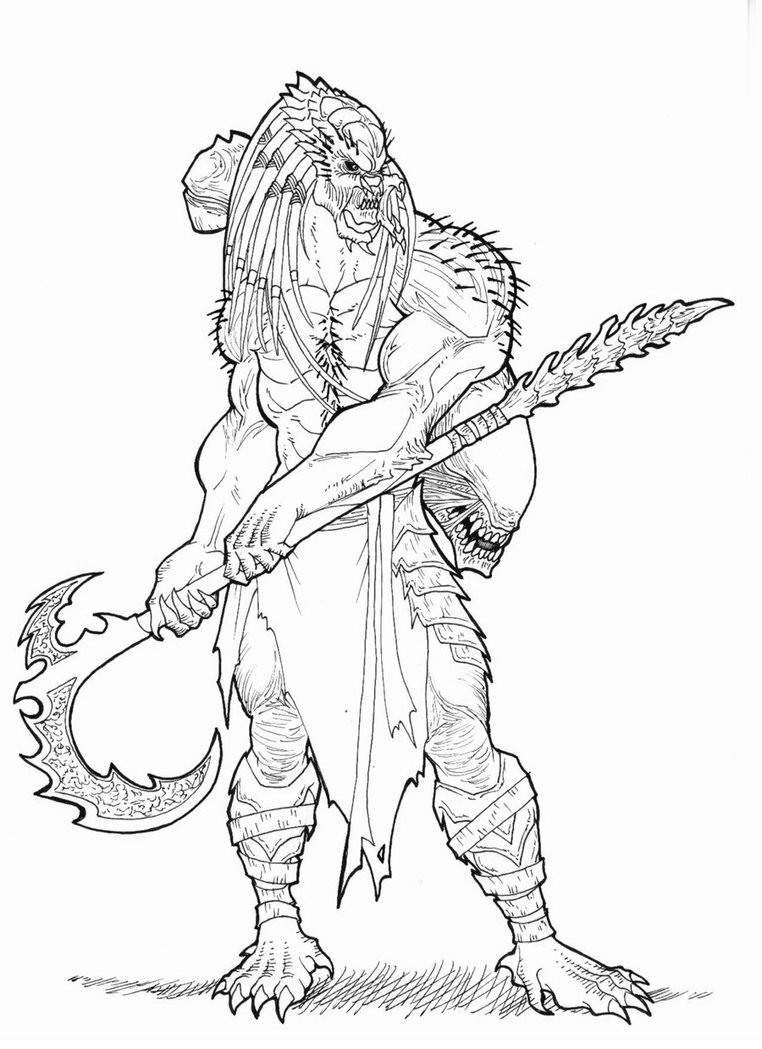 Oh wow Dom! I didn't actually think about it that way, but seeing those above, I really think you're right... Less is more... 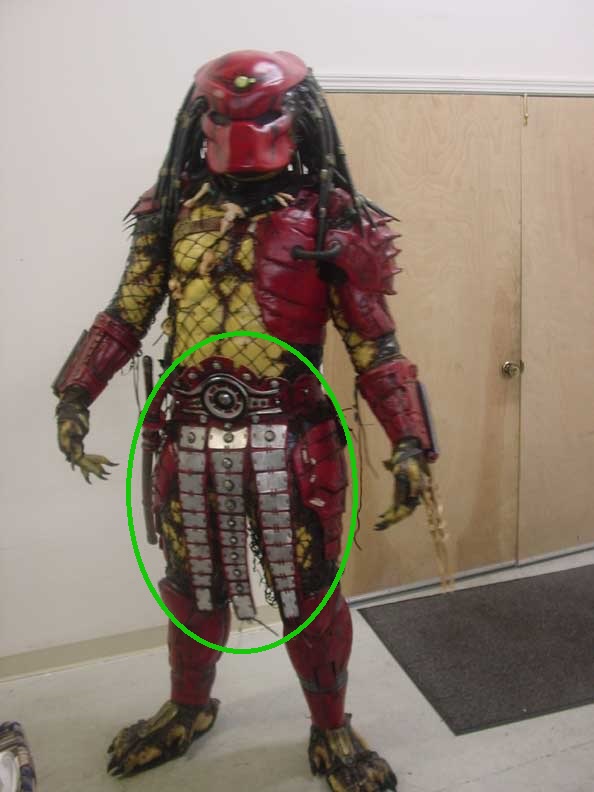 I Love it dom, always have! But, for my one, I'm going for the single row down in the middle, like my concept art..I wasn't able to include it there, but I wanted it to have tassles at the end, for both front and back flaps, pretty much like Dachande's one below 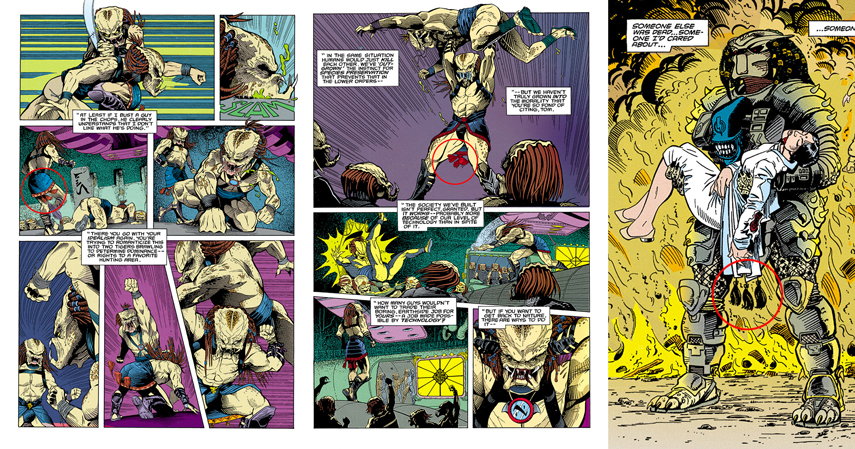 Take a look at the drawing.
This Predator uses a Berserker-/Falconer crotch-armor.
AntCarb sculpted the one shown in the pix.
It has a single row and you can also add tassles at the end (or add a face-relief at the buckle area). 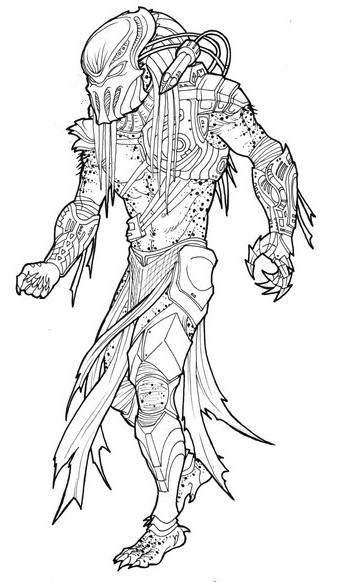 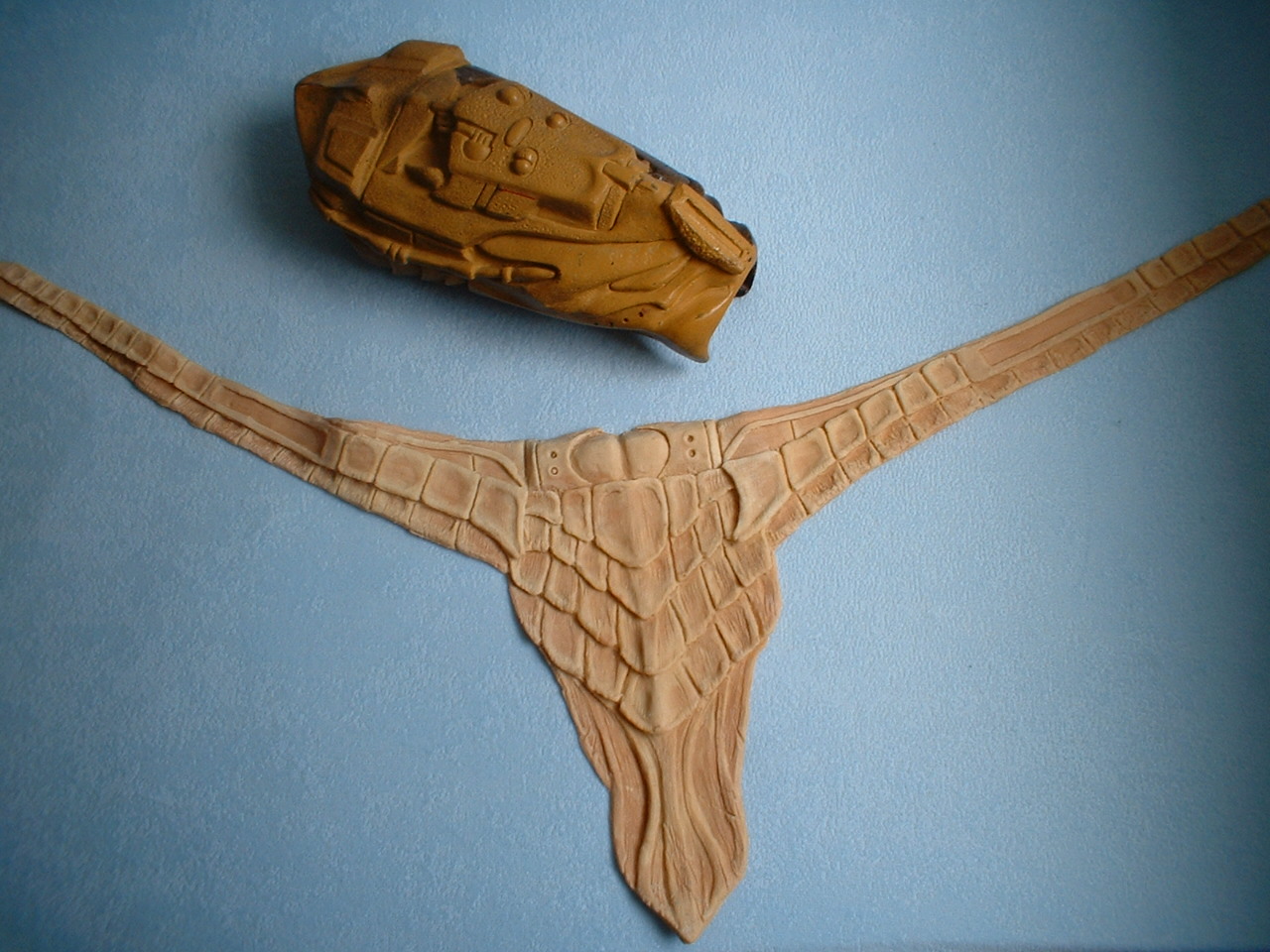 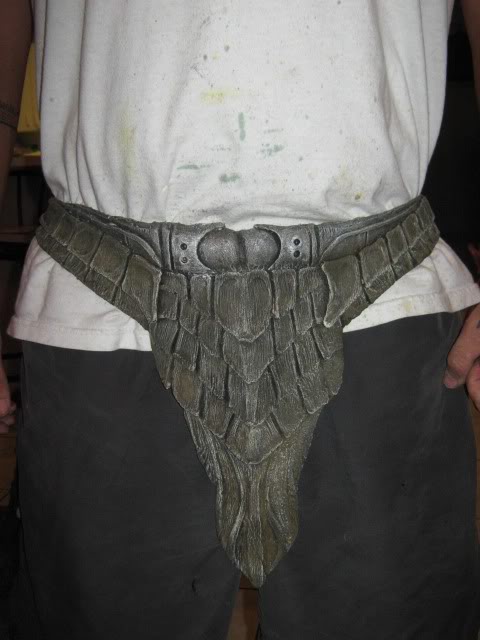 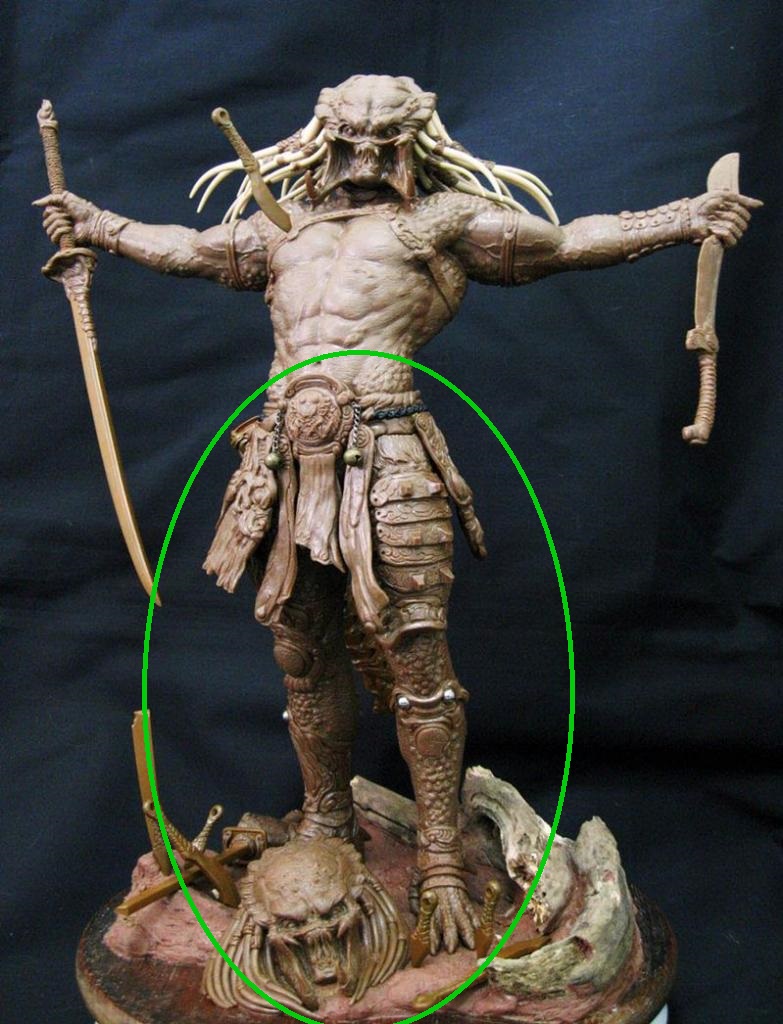 Ha, I have the same image saved in my references folder! And I was looking at it just the other day and getting ideas Love the berserk/falconer loin cloth, most likely my one will be combination of that plus an outer row of amor going down..

After ‘filling’ up the left duct tape leg with some old clay, was finally happy enough to put the better NSP on top..was able to do about 2 hours of work..Slow, but progress! ;P 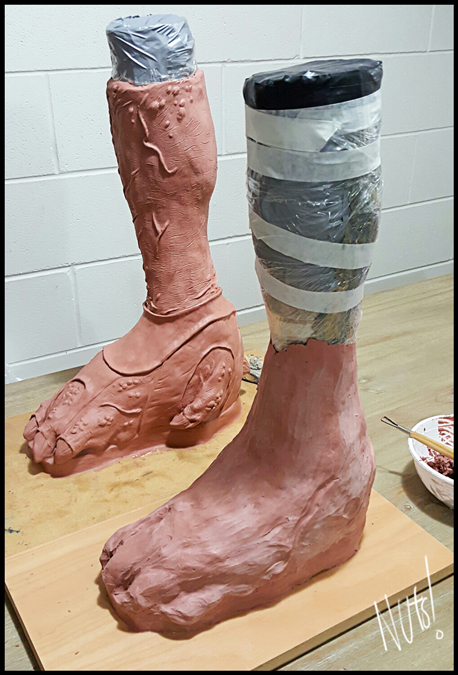 Also, was able to score a really good deal on ‘accessories’ like beads and stuff, which will become Isu’s sort of ‘jewellery…really excited about the buddha/prayer beads, e’ll be the ‘Akumal’ of the yautja world XD Didn’t get enough of the black coconut beads for the neck ring though…will get more in the future, but tested it and I’m loving it!

Been slowly chipping away at the left leg, and been a little busy, and happily, helping Wreav out with The Banished hunters If someone was to take away and cast the left leg tomorrow, I'd happily let them do so, but, knowing myself, I'll still do some last minor details here and there, but thanks LunaticNic , that piece of advice you gave really did bring the leg to another level! Cheers mate! Now I have to 'fix' the right leg! grrr..LOL

Added some battle scars, and made the ankle spike, 'broken' Cheers all!

Is the foot and calf going to be cast as one piece? If it is how do you plan on getting into it?

Glad I was able to help push the sculpt a bit

Huntress said:
Is the foot and calf going to be cast as one piece? If it is how do you plan on getting into it?
Click to expand...

Hey Christina Thanks for the question, yep, that's the plan! I did this all with the guidance of Mr Jeff Shimek's (Alphatech) Pred feet tutorial. He had a zipper running down the front, straight along the shin, and it'll probably end just above where the 1st 'leather' armour is. It's gonna be covered with Shin armour anyway, plus, the bottom of my heels are actually just about where the achilles heel is, where the scales are..the wooden blocks give me approx. 5.5 inches boost

LOL. ok, ok Was gonna be a surprise, but gimme a few minutes..if not the whole day, LOL

Hey again all! I know I've been somewhat of a lurker these past few weeks, I've just been quite busy with a lot of things, and frankly, didn't want to post some things as I was 'experimenting' and felt like sharing only when I feel I've made those things successfully enough. Plus, Wreav twisted my arm, so here's what I've been up to so far... ;P

This was around the 2nd week of June, after reviewing the steps posted by alphatech on how he did his most awesome feet and gathering all the materials, I took a dive in, left feet first ;P 1st and 2nd pic shows the feet all 'lathered' up in PVA before I put on the 'SMELLY'. Couldn't get me Epoxacoat Red from my supplier here as they ran out (and much more expensive) but he recommended this stuff. Polyurethane Tooling Gel. Similar to the epoxacoat in terms of consistency and all that, but f*** me, it stank to high hell. Disclaimer: I'm a complete noob, and most if not all of these materials, I'm working with for the first time, so I did a 1st coat, inside the house, with windows closed. What an idiot, right??!?! In my defense, it was 1am, and it's winter here(2 degrees celsius outside) and I don't have a garage. Yep. I didn't think it would stink that bad, and I did open the windows when I did realise, but it was too late, the smell woke my wife up and world war 3 ensued.

Well, more like the Blitzkrieg. 4th pic is one side with the fibreglass/resin layer after 3 layers of the stink (yep, had to stink up the place 3 times, but don’t worry, after the 1st one, I learned to do it all outside, and during day time.) After 3 layers of resin, I put about atleast 2-3mm thick freeform air putty just to strengthen the mould. Let it cure for 24hours, then put the last 2-3 layers of resin and you’re done! Now, repeat 3 more times for all side, both feet. >.<

TBH can’t say I enjoyed all of that moulding process as much as I loved the sculpting part, but I guess it’s gotta be done. What I’ve learned after all these, from a fellow beginner to maybe future beginners who like to make their own costumes this way, is… if you’ve got the budget, just buy a ready made costume, LOLOLOL >.<
Last edited: Aug 15, 2017

Joking (half meant! Haha) aside, hope the following points can help: The Ultracal/stone mould route versus the epoxacoat/tool gel/Fiberglass mould route. Pros and cons.

The ultimate reason I went with my chosen route is simple. The weight of the mould. After making my head mould from Ultracal last year, which weighed close to a whopping 50lbs, and realising that, in the future, if I made the torso mould and the feet mould, each one of those things would be even much much heavier. It’s hard to move it around, and with no garage (I literally work in a 1.5m x 2m work space inside the apartment between the shoe cabinet and the dining table. The table that you always see in my pics, that’s our dining table which most of the time during dinner, my **** takes more than half while my wife and kids are eating), I’ll be damned if I have to make another mould out of Ultracal again.

Saying that though, if my circumstance was different, I had huge space to work with, I would most likely prefer Ultracal for latex or similar pulls.

Cons
For the strength and how it grabs the detail of the sculpt, I rate them equally, with the PTG probably more susceptible to cracks on the edges. But then again it could be I didn’t reinforce it enough, but in saying so, if your Ultracal mould gets cracks, there’s almost no way of repairing it, other than pray and and hope it will last you a few more pulls. With the Resin/FBG mould, those cracks are much easier to repair. Have to be careful when putting on your layers after the PTG. If there are air bubbles in between the PTG and the resin, those parts can be brittle as I’ve learned the hard way. Nothing major, but let’s just say I’ve ‘punched’ through the mould a couple of times trying to get clay out. ;P All in all, I'm still glad I went the PTG route, atleast for now.. Cheers all!

You have been a busy bee and i've had the luxury of keeping up with both your creative shenanigans and your near death experience from the entities we know as wife and children. I've seen more to this than others and i'm glad you posted your progress brotha!

Wreav said:
You have been a busy bee and i've had the luxury of keeping up with both your creative shenanigans and your near death experience from the entities we know as wife and children. I've seen more to this than others and i'm glad you posted your progress brotha!
Click to expand...

Cheers bro The advises were priceless!

Anyway, a big factor in all of these procedures is the material as well. Like say, the sculpting material. I love NSP, but apparently, it's not a soft enough clay to stick playing cards into.. 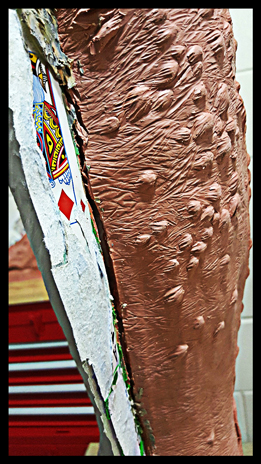 Not sure, which stuff was shrinking, most likely the tool gel, but you can see here that it's pulled the clay where the cards are since they weren't stuck deep enough too..

Plus, PVA didn't do sh** to make separating the NSP from the tooling gel easier.

As you can see on the 2nd pic, I had to scrape off, with much effort, the NSP and had to resort to purchasing a heat gun to 'melt-and-wipe’ the NSP off, and even then, I still couldn’t clean it 100%. On the other foot, where parts of the sculpt had a bit of Petroleum Jelly, it came off easily and clean. Petroleum Jelly > PVA in my books. But yay, success!!!
Last edited: Aug 15, 2017

Theories on the PREDATOR alphabet!?