News about the new pred movie

Well, I guess we now all have a date set for wich our suits need to be ready

Looking forward to the wait!

Arnold is almost back

Good find!!! Love how Arnie/Dutch is coming back in some form or another, but really hope to see more about the Yautja world/culture!
Y

Maybe Arnold might be a cameo or something. I don't actually want him to be a main character, but he might just be someone giving advice or whatever.
Although I think the Predators (2010) movie had great concept and fresh ideas, they could have done more with that. I like how they have a different race of predators, but the Super-Predators looked more like a different species, like the difference between Homo sapiens and neanderthalensis. So the face reveal was a pretty bad moment for me.
I like how they had a lot of different characters from different (yet similar) backgrounds, but I just was not involved in any of them apart from the Russian guy, because he came back to save the glasses guy. I did not see much diversity in terms of actors in AVP:R, although AVP had a few non-white people. Although Adrien Brody did a good job in acting, he just didn't tick with me, and his character was quite unlikable (purposely or not).

I am however looking forward to Shane Black's inventive sequel (The Predator), since he even played in the first movie
Idk if they are going to make a Predators sequel, but if they do, I am definitely waiting for some review to see if it is worth my time. I felt I would have been better off not watching the 2010 one :/

Predators was an abomination.Black better ignores it.

I like the movie predators, I liked the concept. It wasn't that bad...

Super predator face, and berserker killing a carbon copy of p1 aside (as atrocious as it is for you guys)
I have to say it's been my favorite. I enjoyed the color scheme of Berserker more than the original, and same with his and falconers bio.
The netting should have been present on the legs, but it wouldnt help bring out the tick scales on their chest.

City90pet said:
I like the movie predators, I liked the concept. It wasn't that bad...
Click to expand...

Likewise. Sure, there could be a lot of improvements, but concept was solid.

I liked it because it separated it from the original P1which allied itself with royce (ever since I read about Broken tusk/Dachande, the only bad Preds for me before the Super Predators were Bad Blood), it made these guys stand out as the a*holes in this movie. They were the bad guys. When SW studios made the P1, it was meant to shock, and it did. But we've grown to love that face, then when presented with a face that's different, a face that's meant for you to abhor it, everybody loses their minds. ;P

You hated it, good. Then its done its job well.

LunaticNic said:
I enjoyed the color scheme of Berserker more than the original, and same with his and falconers bio. The netting should have been present on the legs, but it wouldnt help bring out the tick scales on their chest.
Click to expand...

I loved it. I liked the dreads the most though, with their gradient change in colours and it not being "tentacle-y", more like real dreadlocks.

Yes I did like that myself. So much so, that I did it on my own suit (and plan to do it again)

LunaticNic said:
I enjoyed the color scheme of Berserker more than the original, and same with his and falconers bio.
The netting should have been present on the legs, but it wouldnt help bring out the tick scales on their chest.
Click to expand...

This is what is worrying me as well...... I loved the "scale" look of Mr. Black and am doing a version for my female Predator.... But I am concerned that the detail will be lost with the netting. We will just have to see...... I want the netting, but I also want the skin to be a big part of the look.

You know an idea came to mind ... what about just cutting out areas of the netting that would actually a accentuate the scaled areas ...

I love the netting, it's one of those things that sort of makes your suit immediately recognizeable as the Predator. But I can do with or without.

What's the netting for anyway? Most of us here know that it's the circuitry for their camouflage. But how does it work exactly? Does having it on 1 part of the body enough to make the whole Pred invisible? or does it have to be the whole body? P1(yes, the original by SW studios) didn't have the netting on his right arm. Wolf, didn't have it on his legs and his right arm. Unless someone from SW studios comes out with an official 'how the predators suit works' book, I say feel free to improvise.

The Super Predators didn't have any netting, but according to movie lore, they're a much advanced race of Predators, so maybe their 'camouflage' technology is way more advanced than their inferior 'cousins', not using netting. If you notice, their 'cloaking is a lot more effective (i.e. you can't even see it bending light). If I was making a P1 or P2/elder suit, I'd definitely make the suit with. But a custom, I reckon it's all up to you.

In Broken Tusk/Dachande's world, they call it a 'Shift suit' in AVP Prey, and depending on the hunt, they choose to or not to wear the shift suit, as with xenomorphs/bugs, Shift suits won't do them any good anyway, especially to a creature without eyes.

I know I might be labeled as a blasphemer, but with the custom i'm making, I'm 99% sure I won't be using netting because 1) my Yautja will be covered with tattoos and 2) his backstory will be he's coming from an island/tribal sort of location, who don't hunt/kill while 'cloaked', they use their natural surroundings and skill to sneak up to their prey, therefor, they have no use, and refuse to use a cloaking device. ;P

I've read It's actually in their code to not kill prey while cloaked, or it's considered less honourable for them to kill from afar with shoulder canons, while cloaked, especially when they're on a hunt. 'Clean-up' mission done by Wolf was different. Or 'survival mode'. Use every arsenal to get the job done.

Most of you might have seen this bit of news already, but putting it up just in case you haven't

Isubomo said:
Most of us here know that it's the circuitry for their camouflage
Click to expand...

?
when was that ever stated? given it doesn't cover the whole body or armour and appears torn or damaged on some creatures, i'd say it's just tough protection against slashing claws/weapons.

Only wondering, but wat would people prefer. A predator similar to the original or something completely different. I mean style of film and style of creature. So two separate questions. And a third question, wat do yo think will actualy happen.

VanXant said:
?
when was that ever stated? given it doesn't cover the whole body or armour and appears torn or damaged on some creatures, i'd say it's just tough protection against slashing claws/weapons.
Click to expand...

I've always thought about it as such, in my head, it made more sense, than say, protective clothing. Didn't mean to insist, apologies if it sounded that way. And..saw it here

AVP Wikia (http://avp.wikia.com/wiki/Yautja_(Predator)) states this:
'Another common piece of Yautja clothing is a heated wire mesh undersuit with temperature control elements to help the Predator adapt to the harshest of cold environments.[13] Other items, such as the...'

Yautjaencyclopedia (http://yautjaencyclope.altervista.org/armor.html), under Hunter padding, has this to say as well..
The padding is a basic mesh that does not offer much more protection to the thick hide of the Hunters already. Most are designed as armored jump suits meant for casual wear in the corridors of their dark vessels. This is the closest they get to flight suits. This provides electric-generated warmth, keeping the Yautja warm even at -50 degrees Celsius. A component of the camouflage device's circuitry allows cloaking of un-armoured body parts.

So yeah, lots of different uses, and from a technical stand point and lore wise, no one really knows.. ;P 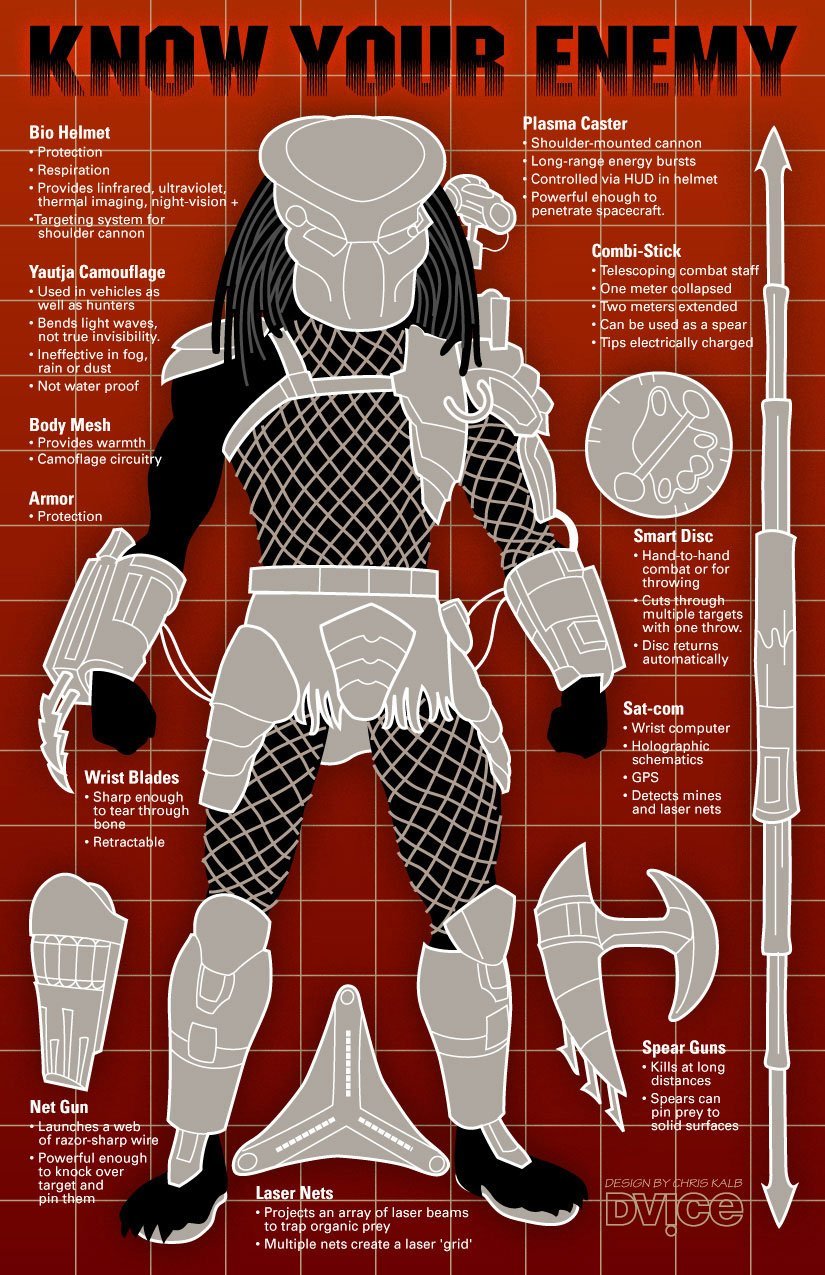 predtrooper said:
Only wondering, but wat would people prefer. A predator similar to the original or something completely different. I mean style of film and style of creature. So two separate questions. And a third question, wat do yo think will actualy happen.
Click to expand...

As much as I love the originals/films, my vote is something completely different, but still believable or can easily be attached to the previous ones. Shane has already said that it will show a lot about the Pred world and culture, so likely the latter. Always love seeing new, creative takes on our beloved Predator.