Hello, this is my first post on this forum.

The short version: I got the wrong (non-lit) version of this Doom statue, and decided to keep it thinking that as it is physically the same as the lit version I could modify it and make it functionally superior to the factory design. Specifically, in order to change the batteries you would have to take all the fragile figures off the base so you could flip it over to access the battery! And also you would have to lift and tip the base to turn it on/off, which seems unnecessarily risky to me.

So I carefully removed the lower board of the base, and cleaned up the surfaces. As I suspected there is plenty of room internally for components, and you can see the plugged factory cutout for their battery box. 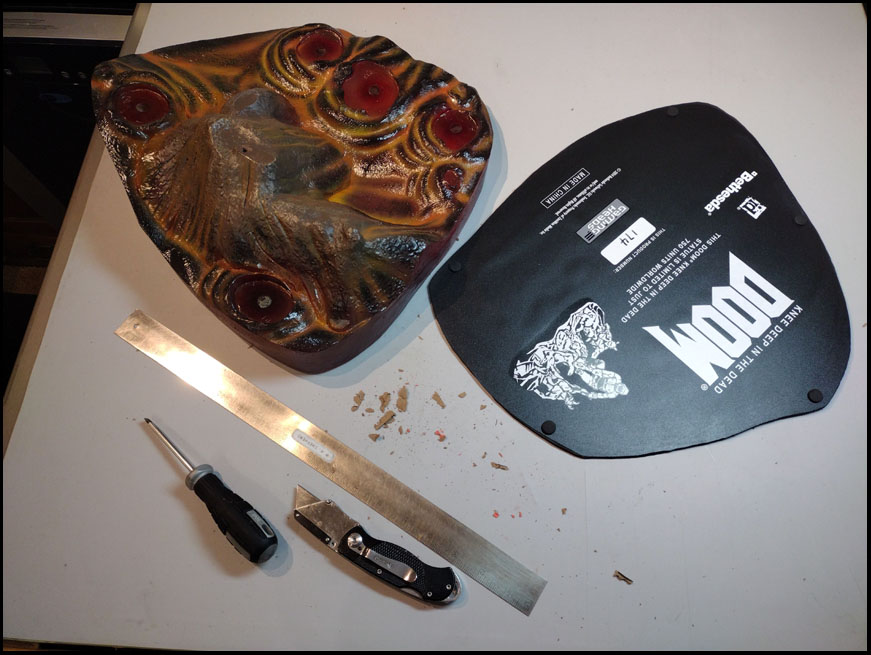 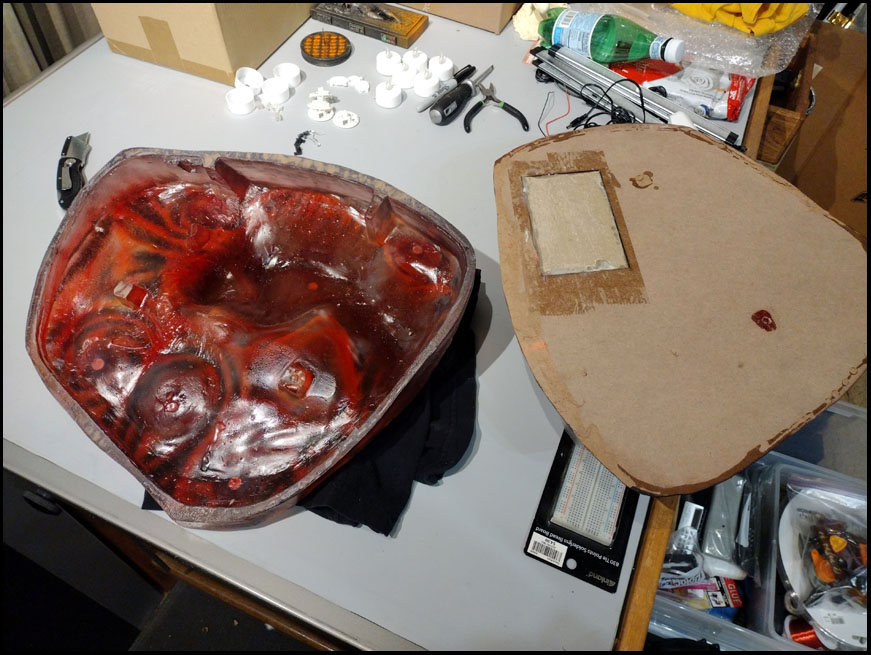 As the base board was porous and sealed on one side by the thick vinyl sticker I thought I should seal the other side to prevent future warping. A couple coats of Liquitex Matte Varnish. I also (not pictured) sanded the lip and painted it matte black to match the sticker. 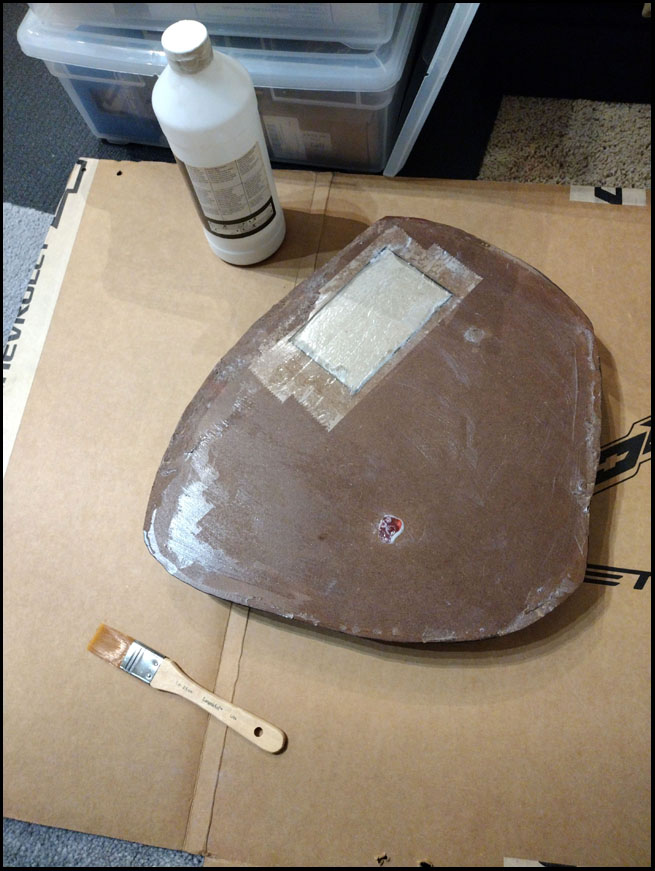 Then I made indexing guides with blue tape, and also labeling the (tapered) thickness of the base walls at each point. 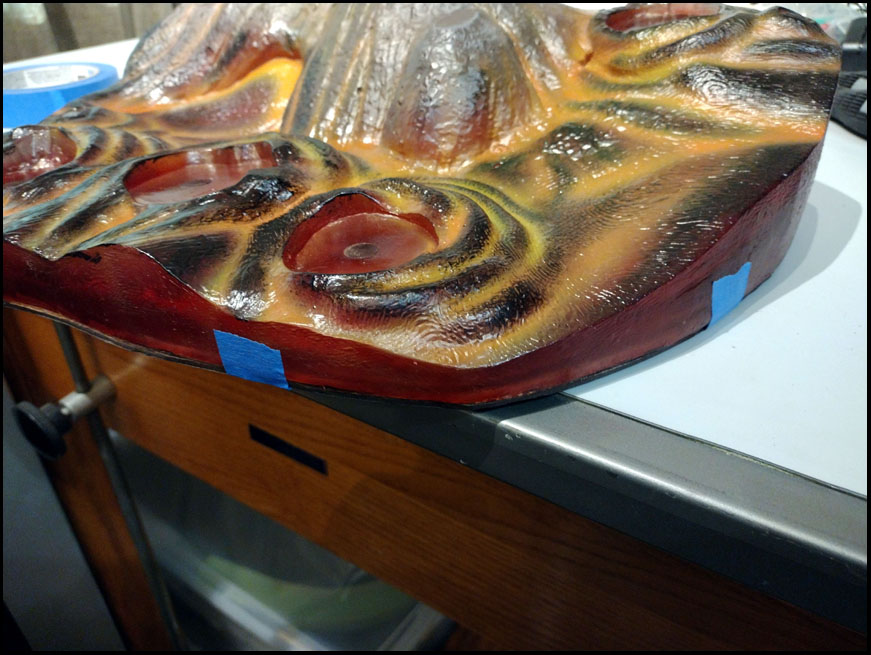 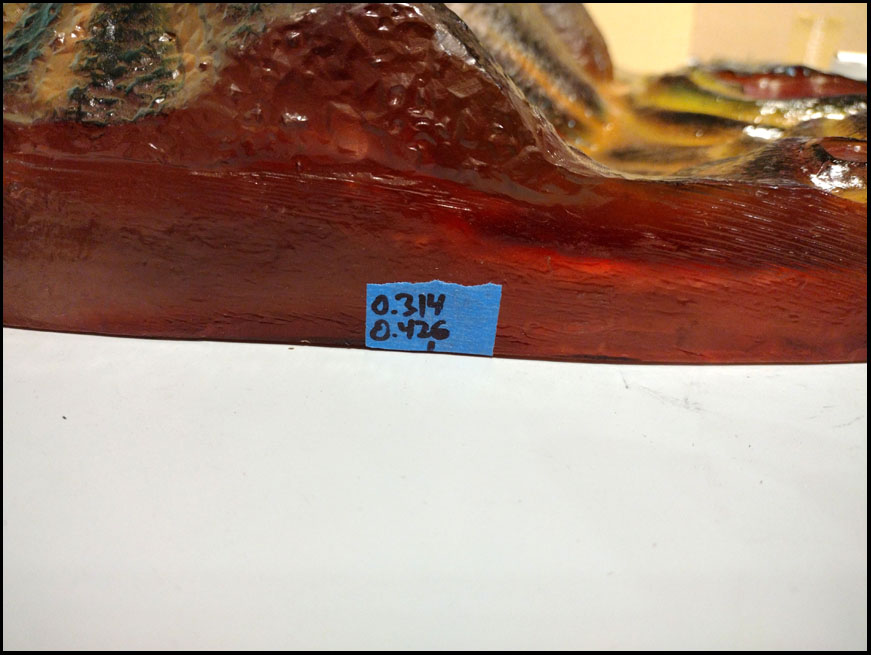 Then I made weird little angled guide pins out of paper clips and CA+baking soda. The main base will now lift off the base board (so I can leave the figures in place to access internals) and index easily when re-placed. 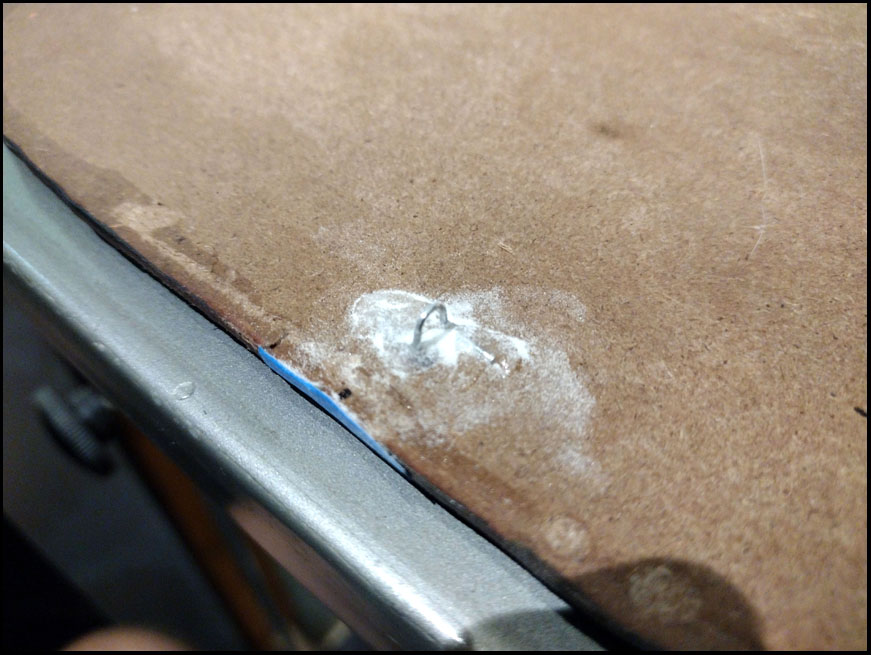 And now a real sign of high class work: Blue Tack! But seriously, I did use Blue Tack...because I had no idea if the light locations would look ok and I wanted to be able to move them around but also have movement of one not disturb the others. For the record: I hate Blue Tack (Quake Hold rules!). 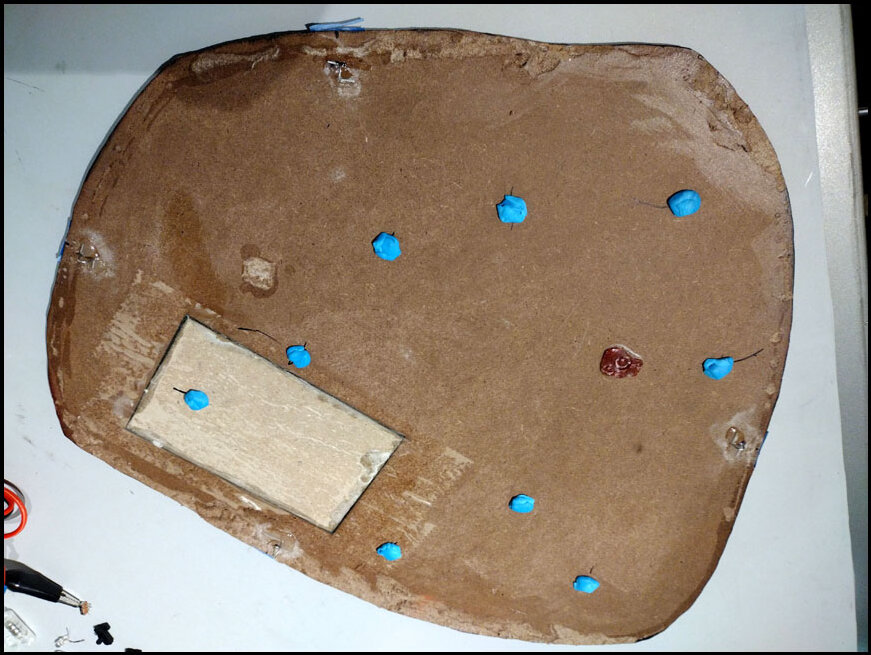 I will point out that electricity is not a friend of mine. And I always feel like I'm swimming up stream trying to wrap my head around electronics. So I K.I.S.S. and used flickering tea light LEDs (the right tool for this job anyway). I chose parallel because I wanted there to be no voltage dropoff. And while I soldered the LEDs to their wires I chose a simple twist connection to join those leads. My assumption was that something would go wrong and wanted to design in points of easy replacement. Early testing: 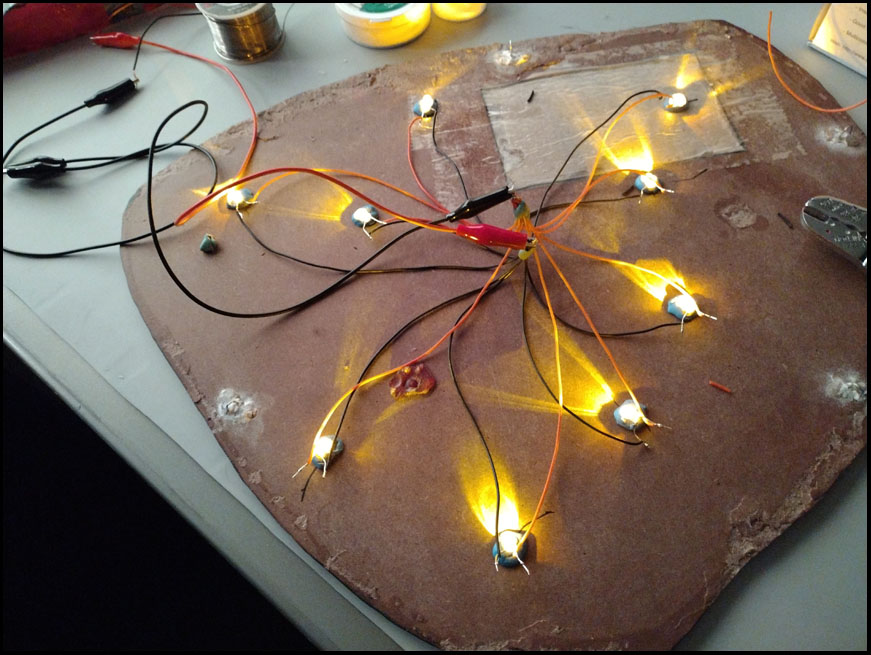 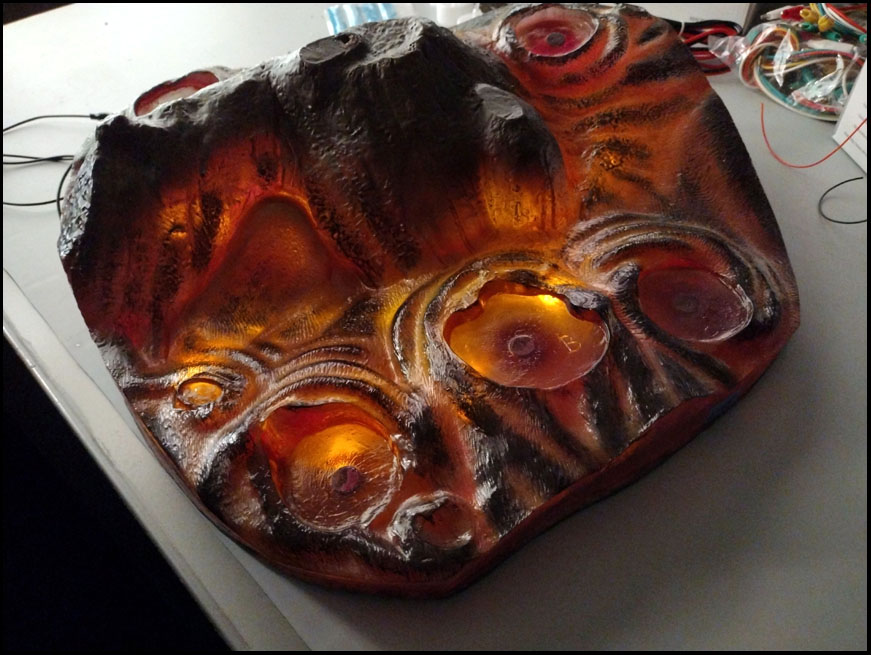 And repositioning of the LEDs, including using the plastic tea light bases as risers. Again, all held in place with horrid Blue Tack. I thought about gluing them in their final positions, but then I thought at some point they will burn out and with less permanent adhesion they will be easier to service. And, most importantly, this base is for ME, not anyone else. It's not going to be shipped, and it will always lay flat. Under any other circumstances I would never use Blue Tack like this! The battery box and switch are CA glued. 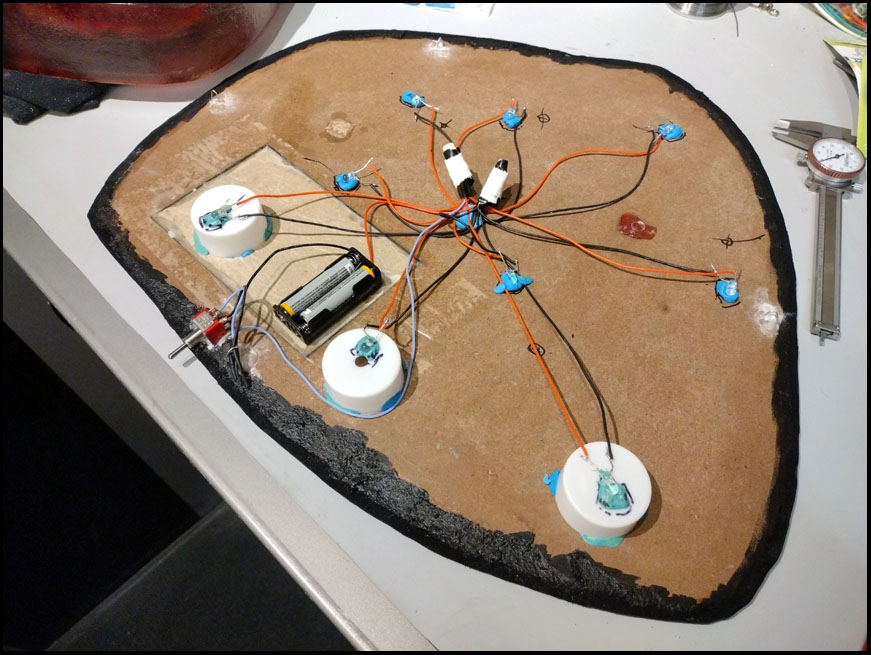 Then I had to mark/measure for the rear-mounted switch and cut a hole for it. Just the tip (no need for the retaining nut, and wanted it relatively low profile). And yeah, I messed up and drilled a little too high. Good thing it's in the back. It's a 3-way switch, because I would like to have the option of running it off a transformer later. Currently the resistor math scares me a little and I needed to get this project off my desk, so deferring the transformer input for later. 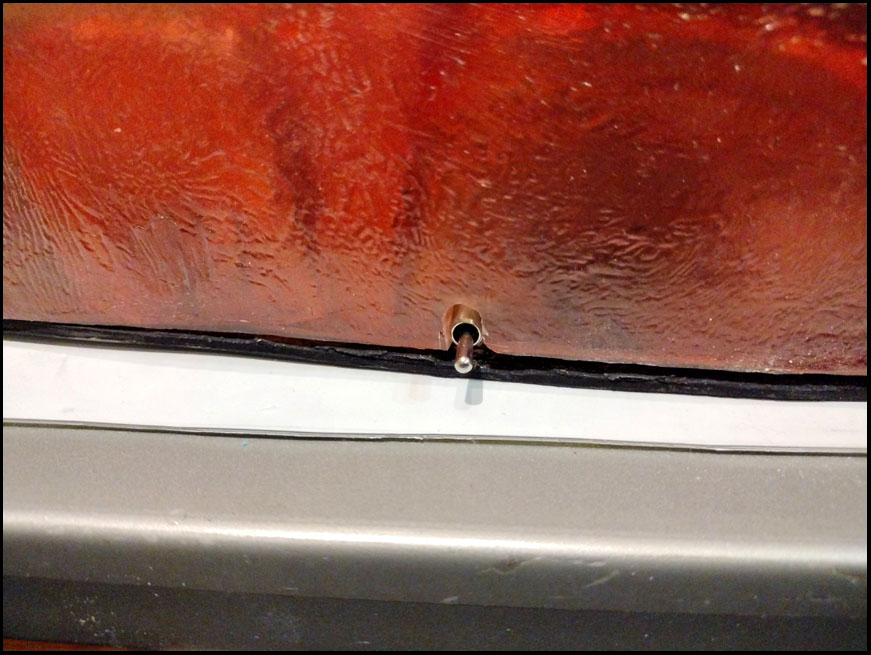 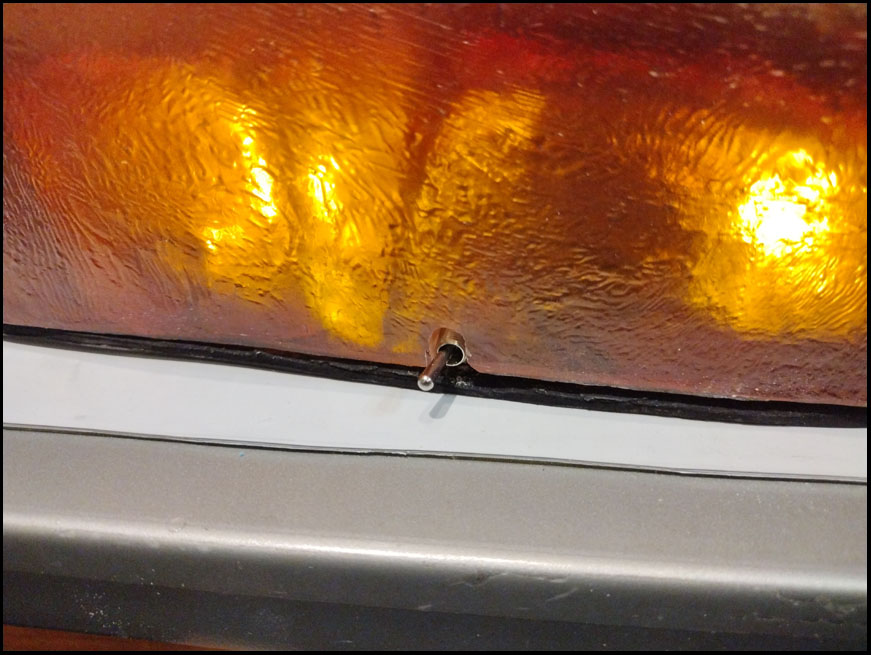 Lighting finished. How it looks in the dark: 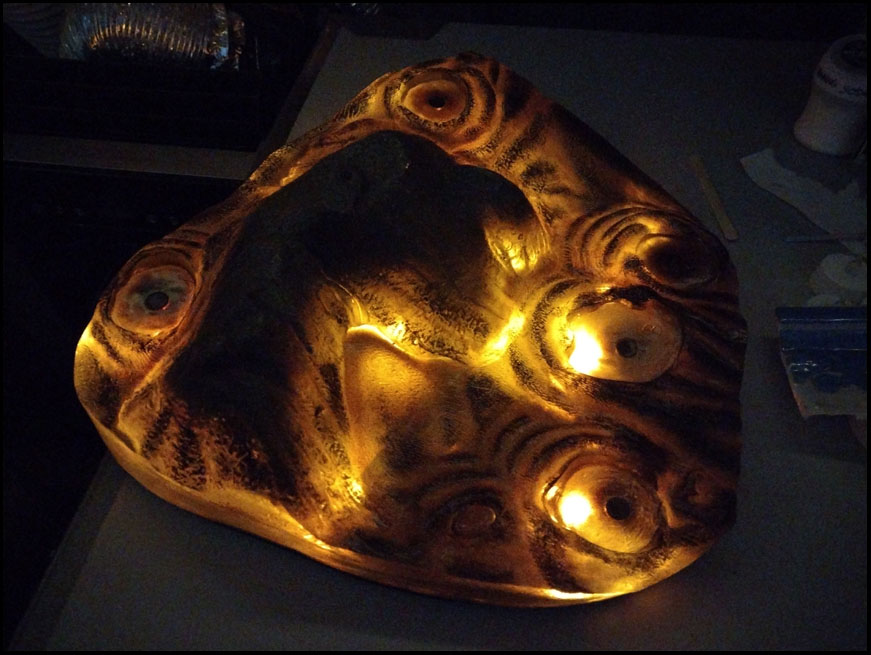 Finished and assembled in a lit room. The lights are much more noticeable in person, because the eye sees more than the camera and because of their flickering.
Off (meh): 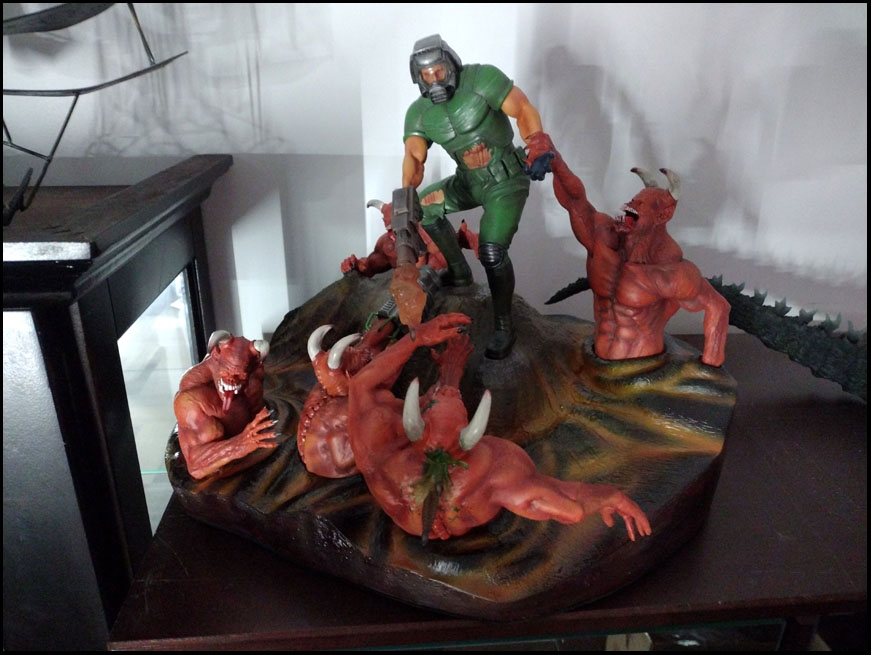 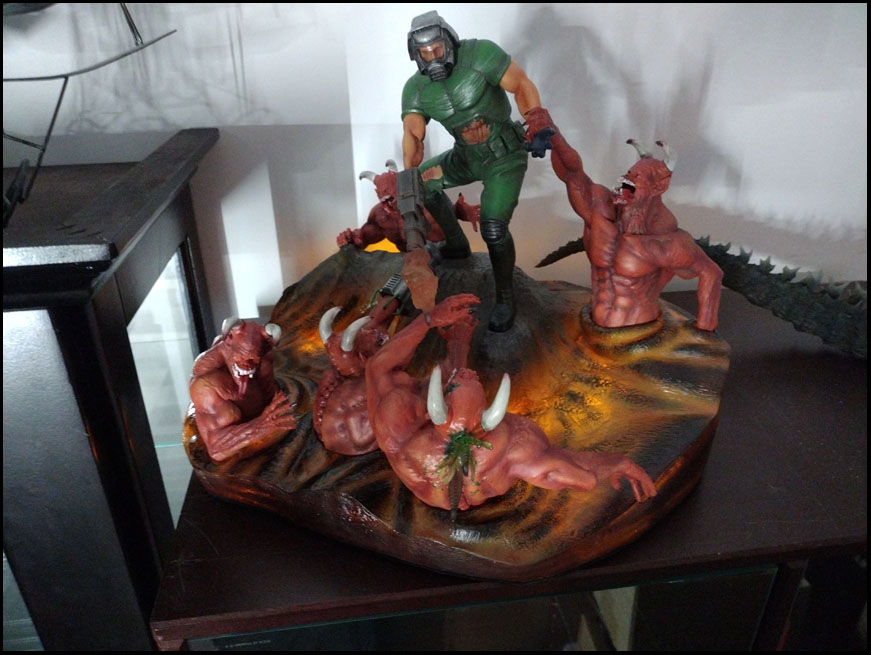