I recently joined the community after finding a 2-Cell Graflex in a large lot of vintage camera gear I sourced to sell. I've been flipping camera gear for years now and this was the first Graflex flash I've come across, surprisingly. I generally don't keep any of the stuff I find as it's my income but this piece was in such good shape that I decided to finally make myself a lightsaber hilt for display with it.

Here's how it looks as-is as a 2-Cell flash: 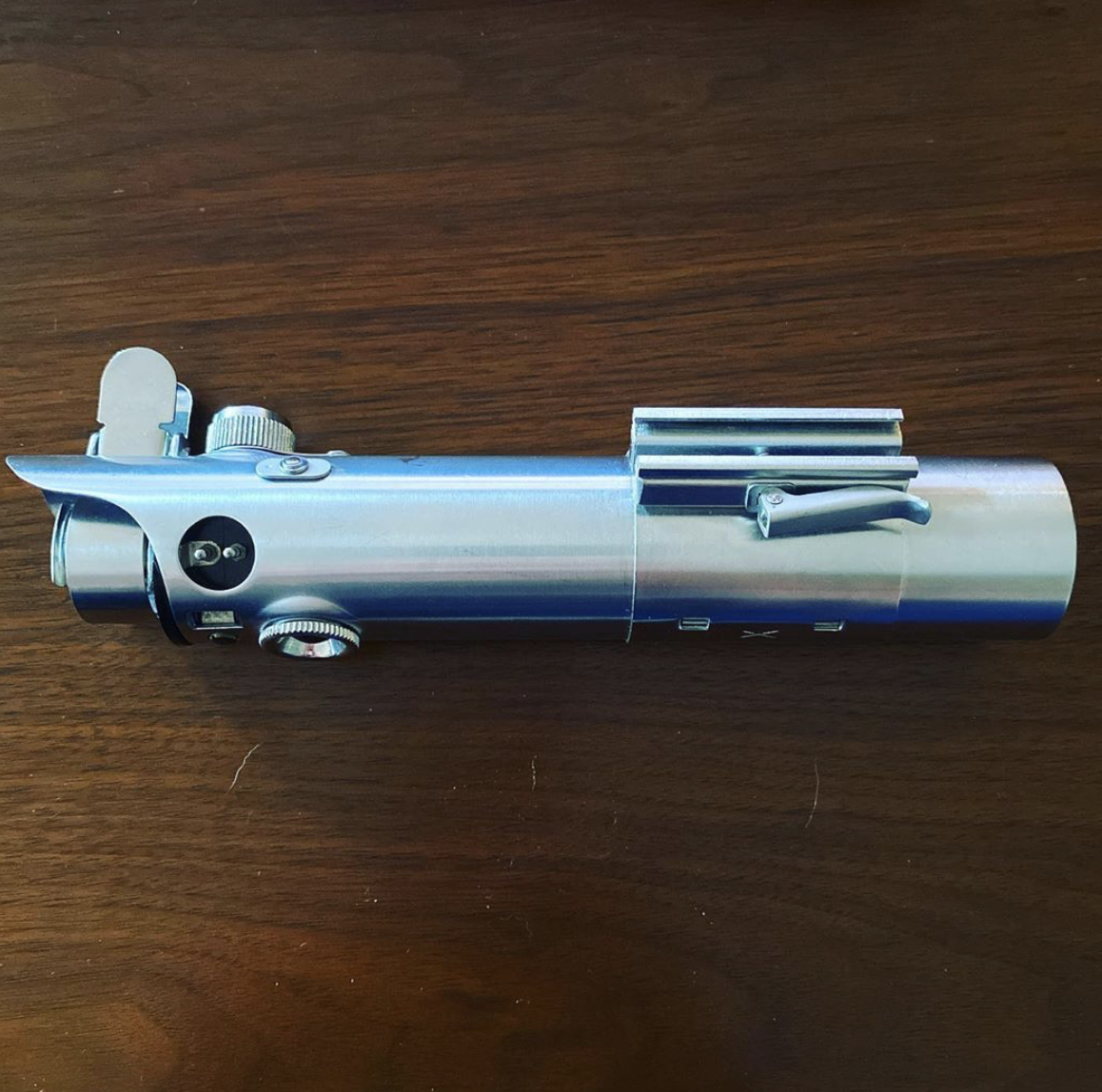 It was very clean which was nice. I like the look of a nicely patinated version but I can't complain when it looks real nice too, lol.

Thhis has been a fun little journey over the past 2 months as I've educated myself and read threads upon threads on here and Roy's book was the best source of consolidated and to the point information to distinguish between the various ways one can proceed.

My first thought was to use it to make a screen accurate ANH build. I wanted to keep it as vintage as possible with as many original parts as I could fesibly do. And, wow, what a rabbit-hole that proved to be, lol.

I realized that maybe the ESB version would be better so I settled on that, with the eventual goal being, a trilogy display with ANH, ESB, and TFA displayed together.

During the process I obviously discovered all of the vendors that have popped up to satisfy the demand for parts and pieces and this intrigued me as a obviously needed a 3-Cell bottom to bring my 2-Cell up to spec. Looking at the normal venues, it was going to be hard to find that piece by itself and I was also nervous to try a scratch build with zero experience and limited knowledge.

So, Roman's pre-configured and put together hilts hit my radar and I figured that was the easiest way to put a full hilt together with my vintage top. Fast and easy, right?

Nah. Stupidly, instead of just asking, I leapt in and ordered what looked right to me. I ended up ordering the Maz Kanata found version hilt. And once I got it in hand, I had done a lot more research and realized my mistake. Oh well, I guess I now have a hilt for TFA representation.

Here it is as it currently exists after receiving Roman's bottom section: 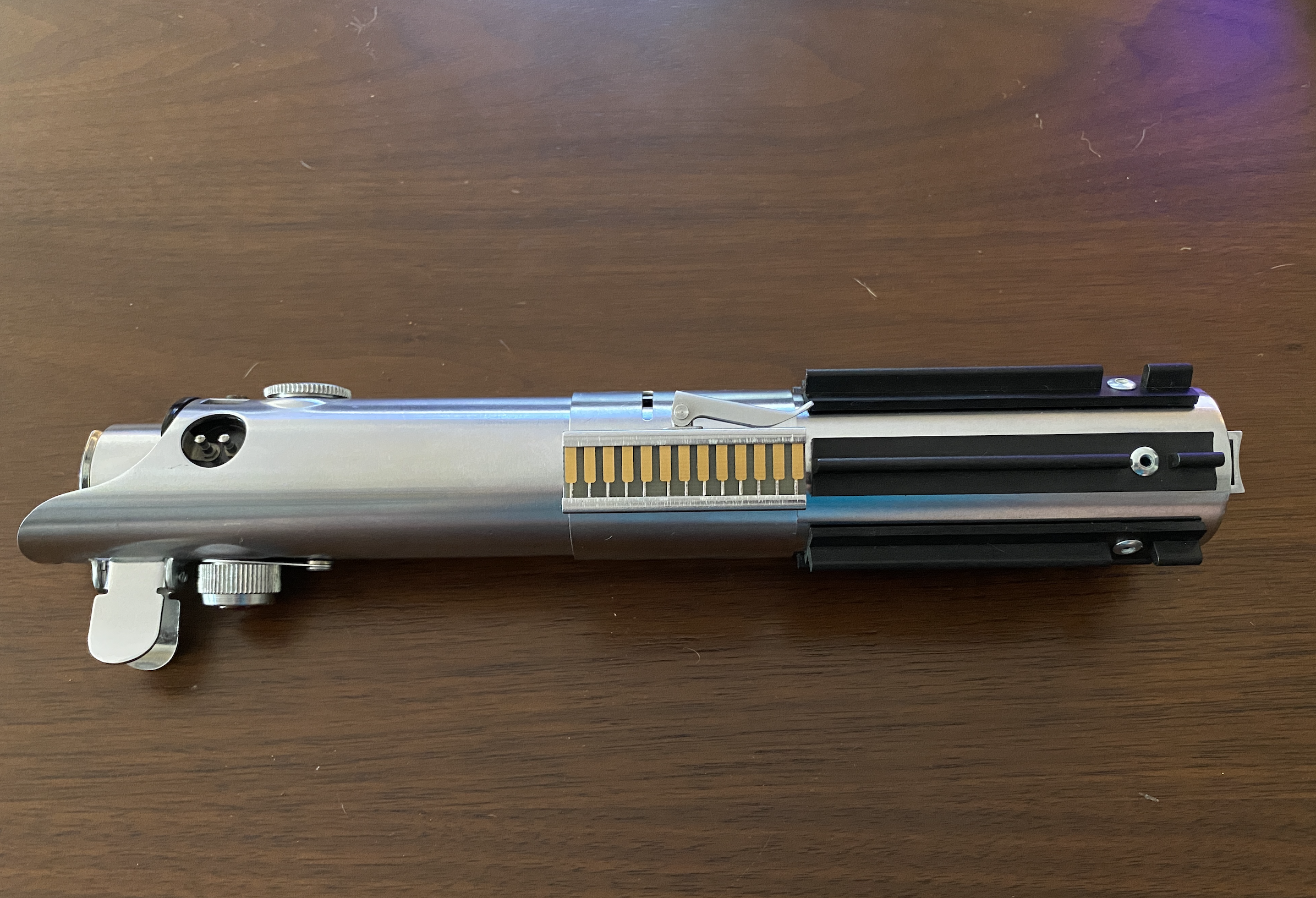 The Graflex logo is still present and not covered, so I need to address that and while waiting for this setup, I did some hunting and decided to just go for it.

I now have coming to me, a full 3-Cell, a 3-Cell without a clamp, an Exactra 19 calculator, and various odds and ends from WannaWanga to make a revised, 7-rivet ANH, saber. I also ordered the circuit board seen in the build above from SlothFurnace and it's obviously the ESB board so it doesn't match the TFA board but that's on the way from Roman as well so it will be adjusted.

My plan is as follows. Take the hilt above, and reconfigure it as an ANH build with the actual bubble strip I purchased. I'm going to scratch build the hilt bottom so I'm looking forward to that.

Because I have the TFA replica from Roman and I'm missing a clamp out of the three flashes, I'm going to get a replica clamp from Roman for the TFA build. It's kind of halfway there anyways and the TFA version is the one I care about least of the three so it not being a full vinatge piece is fine. I had ordered the TFA clamp sleeve from WannaWanga so I'll add that to the replica clamp. I had also ordered a replica red button from Roman as I thought I'd be putting together an ESB saber so I think I'll use that as the one red button for the TFA as well.

That means I can have two vintage red buttons on the ESB build which will be nice. That will be a scratch build as well so I'm debating if I tackle that one first as it seems to be the easiest build version especially considering the nuances of the current ANH build.

WHEW! Sorry if that was a lot, but I'm super excited and I'm hoping I don't fall down the Kenobi rabbit hole and Vader rabbit hole but I hear them calling...

I'll update this thread as I go.

Thanks for listening and looking forward to hanging in the community!
Last edited: Jun 11, 2020

Yeah, it's basically pristine. A few small scuff marks but no corrosion at all.

As mentioned here's the next piece of the puzzle:

Looks nice in person. Gonna take it apart and look inside!

Opened it up this morning.

My biggest concern was the legitimacy of it. I'm not sure how often, if at all, fakes are inserted into the calcs but everything looks good from the inside. The underside melted tabs look legit and need to be cut to remove it so I guess that would be the most telling thing.

With that in mind, I have some questions about how to proceed.
1.) I struggle with distinguishing whether this is the squared off version of bubble or not? I think it's the squared off version but just wanted to confirm. And if it is, is it useable for an ANH build? I see mention of it being used for a Vader Saber but I'm a bit confused by that so some clarification would be appreciated.

2.) I plan on harvesting screws for my ESB t-track screws. I know this isn't fully agreed upon that that is where they come from, but do other, more common Exactra calcs have the same screws?

3.) Is there anything else from this Exactra that should be pulled for future potential builds?

4.) I've seen videos where people route the ends off the bubble strip. I don't have the proper tools for that so I was considering getting a small pull saw and mitre box. Is that a good way to do it or is there potential to damage the bubble strip?

5.) Once I've taken the two ends off, should i sandpaper the ends to smooth it up or leave it as-is?

I'm debating whether to angle the sides to fit under the clamp as discovered in the Elstree Hilt but I'll figure that out at another time as it isn't something urgent.

Other parts coming in at different times, so I'll update as they come in and i get to them!

RPF PREMIUM MEMBER
hey, nice project
just to answer one of your question, all exactra model have those screws or different length screws. a few TI calcs also have the same screws.
cheers

eethan said:
hey, nice project
just to answer one of your question, all exactra model have those screws or different length screws. a few TI calcs also have the same screws.
cheers
Click to expand...

Thank you! I expected as much but good to know for a fact. I was worried I would have to hunt down more expensive calculators to pull it off, lol.

RPF PREMIUM MEMBER
look at the other exactra models and take the biggest one, lots of screws there also check out the TI cousin of that big model, the inside of that calc was used for the X wing cockpit instruments

Yeah, checking the options out for the screws. We'll see how that goes. I'm debating whether to get the OG Kobold clip. Did the ring come with it installed generally?

RPF PREMIUM MEMBER
beautiful parts!!! and welcome to the community

I'm glad you kept that 2 cell, we get to see your saber journey now

As for the exactra, that looks like a real strip. You can sand off the tabs on the back, and you'll have to chop it shorter so one of those mini razor mitre saws should do the trick. The Exactra boards still need one more change to fit into the clamp. You can thin the board with sandpaper.... Personally? I tape over the bubbles and sand off the upper corners. Turning the rectangular profile into a trapezoid, so it can slide under the clamp edges

RPF PREMIUM MEMBER
Looking good! You jumped in feet first, what a good way to begin!

Yeah, I realized after that I was mistaken in that. Sorry! Still learning.

RPF PREMIUM MEMBER
I'm just messing with you, it's everybody's book. I just put everyone else's detective work in one place.

SethS said:
I'm just messing with you, it's everybody's book. I just put everyone else's detective work in one place.
Click to expand...

Well, it's the absolute best bit of condensed knowledge out there. When I first started researching, I really struggled with some of the more obscure details and the book set a lot of things straight. Really was the key push into getting this going. The community is just outstanding. SO thanks to all!

thd9791 said:
beautiful parts!!! and welcome to the community

I'm glad you kept that 2 cell, we get to see your saber journey now

As for the exactra, that looks like a real strip. You can sand off the tabs on the back, and you'll have to chop it shorter so one of those mini razor mitre saws should do the trick. The Exactra boards still need one more change to fit into the clamp. You can thin the board with sandpaper.... Personally? I tape over the bubbles and sand off the upper corners. Turning the rectangular profile into a trapezoid, so it can slide under the clamp edges
Click to expand...

Good to hear it looks legit. I'll leap in with the mitre saw so thanks for that info. I'm still debating the trapezoid mod to fit under the clamp. I may do that. What grit sandpaper do you recommend if I attempt it?