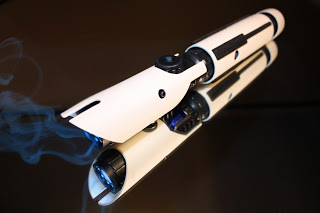 As I have still to find a job, the second annual dollar store lightsaber building contest this November was a great opportunity to stave off cabin fever and keep the modeling skills sharp, and the 20£ cutoff insured I could afford it. I used the following parts, minus the ones that are crossed out. Mind you I've just moved to the U.K. so I had to do the whole thing with a Dremel. 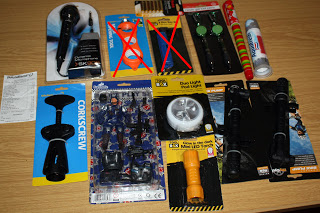 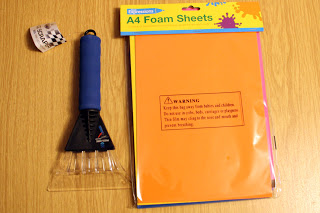 I dremeled out the crystal chamber window from the wee little flashlight, as well as the "vent holes" on the side. This flashlight was great, as I could use it's two screw off ends to attach it to the other internal segments. The crystal itself was cut from the invaluable ice-scraper's acrylic blade. For the internal mechanics of the crystal chamber I cut apart the accessories from the "Funtastic Police Play Set" which had a lot of great textures. 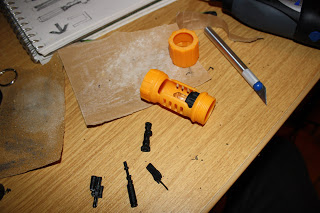 For the emitter I used the top screen from the microphone, but hollowed out the middle, then cut lenses from the pen and closet light to color and diffuse the LED's from the flashlight. I then glued these to the hollowed top of the flashlight. 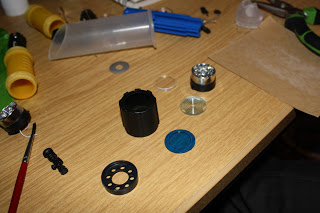 Here it is all together. The wire is stripped from the microphone cord. I was hoping the mic
​
would have some cool electronic guts, but it was totally empty inside. Thanks Poundland.
​ 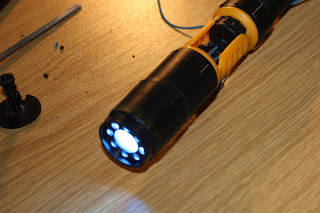 For the shroud I used the Aquafresh tube. They were polyethylene, and if I had to choose a least favorite plastic it would be polyethylene. Nothing sticks to it, it gets all hairy when you cut it, and sanding it is a ghastly nightmare. But the tube fit nicely, so there you are. 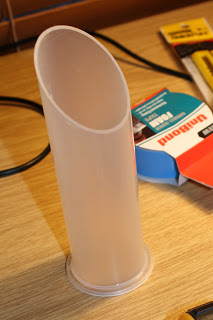 For the pommel I wanted something that had interest and spoke to the rest of the saber. I used two sections of Aquafresh cap, the reflector cup from the flashlight, and some of the EVA foam. 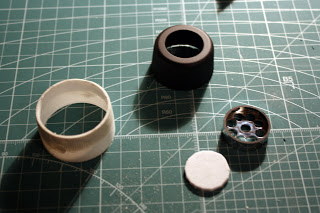 To light the crystal I needed a seperate light source from the emitter, as it's battery supply wouldn't cover enough LED's to light both. I used the blue LED rig from the ice scraper (why do you need a light up ice-scraper?) and cut it down to fit in the base of the crystal chamber. I then used some of the microphone wire to run the switch to the handle. 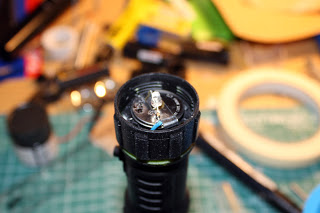 Next the unthinkable happened and I dropped up my DSLR taking photos during the build. So, the contest ended up being a lot more expensive than 20£. I am such a *******. 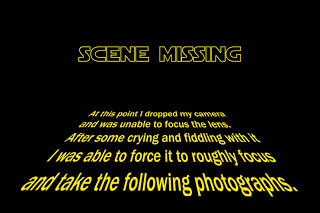 I finally figured out I could focus by getting it in range physically and manually shooting. I'm still out a spendy lens, but here it is. I used the decorative mirror the landlord put up to make my tiny flat seem bigger for the backdrop. For the paint scheme I was inspired by McQuarrie's original sketches of the stormtroopers holding sabers. The sabers they were holding in the concept sketch looked suspiciously like Obi-Wan's, so I pushed the design to look more sinister and mass produced. Initially I wanted to do a more elaborate paint job using some blue details, but ran out of time. 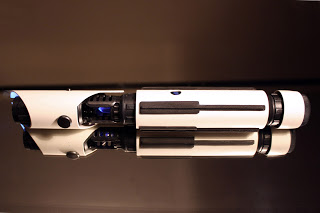 I think my favorite bit is the crystal chamber. The only part I ended up using from the bike pumps was the bit holding the crystal and the power switch. The blade adjustment knob is a screw cap from the corkscrew sanded flat. I was really impressed with how sturdy the switches from dollar store crap were.
​ 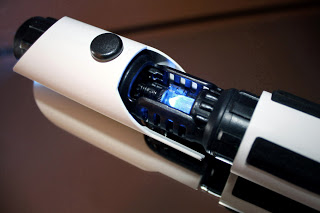 The grips are cut from two layers of the EVA foam sheet. I couldn't believe they sold that stuff at Poundland. That was the biggest score of the whole build. The charge port is the tip of the pen used for the emitter lens.
​ 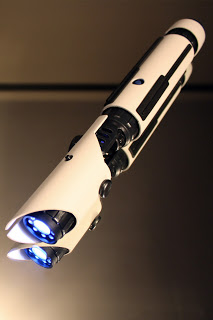 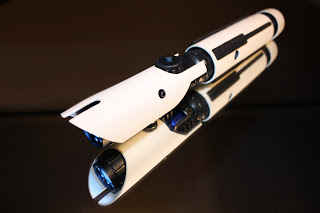 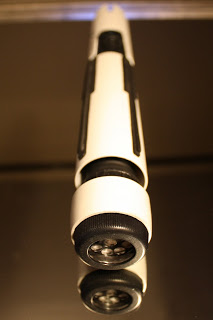 I voted for this one (and apparently so did most everyone else). Absolutely great job, expecially with what you had to work with, both in tools and in parts.

I'm spoiled, I use a mill and a lathe and rarely touch the dremel, lol. As such, I am always impressed by what people can do with other tools.

You deserve a medal for being able to make that polyethylene looks as smoothly finished as you did!

I love this saber! I know a lot of people saw it as a Portal style and I see that as well but my 1st impression was a Stormtrooper saber. Excellent work on this piece!:thumbsup

this has got to be the best looking custom saber ive ever seen, its so clean and crisp, and the fact that you made it out of $1 store bought items just makes it that much better. i could totaly see a storm trooper carying this around and using it. haha the funny thing is that i was just looking at the concept art earlyer today and wondering why noone ever made the trooper saber :lol
great job, i like this design so much i want to try to make my own!

Too bad your parts are from the UK; means us Stateside folks can't easily buy the same parts and reproduce this beauty.

From the photos, it looks like all the parts are pretty small; what's the size of the finished saber?
J

That's funny, the first thing I thought of when i saw your saber was McQuarrie's original skectches of stormtroopers with lightsabers.

One day, during the contest, I was at the Dollar store with my Girlfriend, and I saw one of those ice scrapers. I held it up, and said "Well this grip, would make a great start for a lightsaber." "people keeps saying they can't find any good parts at the dollar store, this thing builds itself." When I said, that, I never, ever, though of actually making a crystal from the acrylic bit, that is awesome.

Yours really is a very cool saber. Thanks for being in the contest, and for posting this thread, to share with everyone how you made it.
Last edited: Dec 9, 2010

This was a completely brilliant build - the design concept is absolutely awesome and I hope that you make it into a real metal-based saber. Use of the mirror as a presentation backdrop was awesome - after you did that I realized that you basically got 2 views of the saber in each picture. Well done sir!

Yeah, it was intensely minty. You can still smell it under the paint.

Too bad your parts are from the UK; means us Stateside folks can't easily buy the same parts and reproduce this beauty.

From the photos, it looks like all the parts are pretty small; what's the size of the finished saber?
Click to expand...

I think poundland had slightly better stuff than dollar stores in the US, an unfair advantage. The finished size is just under a foot long, perfectly respectable.
J

This is really awesomely done!

RPF PREMIUM MEMBER
I would have sworn you found some white plumbing pipe (PVC) at the DS! That it is actually an Aquafresh tube? BRILLIANT! You got my vote.

Hogosha said:
I would have sworn you found some white plumbing pipe (PVC) at the DS!
Click to expand...

EXACTLY what I thought when I first saw it. I remember saying "I want a dollar store that sells PVC tubing!!!" :lol