A few years ago (well, in 2014), Chagall Guevara's lead singer and chief lyricist, Steve Taylor, released his first album since 1993, Goliath. I don't understand how he's still the thinnest man in showbiz after all these years. This one has a more ragged, raw feel -- and the video is fun.

As an aside, the drummer on this album is Peter Furler, who from 1997 to 2009 was the lead singer for the Christian band Newsboys (prior to that, he had been a co-lead vocalist and was drummer for that band since he co-founded it in 1985). Most of Newsboys' hit singles in the Christian rock niche during Furler's time with the band were collaborations between Steve Taylor writing lyrics with Furler serving as composer. Furler can be glimpsed briefly in the video. He's the guy with the shaved head.

CB2001 said:
I'm familiar with them. I've seen them live in concert three times at Wild Adventures Amusement Park (the park that was used for Pacific Playland in Zombieland).

Yeah, they put on a great show!

This one brings out the Swedish in me:

More songs from the "soundtrack" to influence me for a possible story:

Traveling Wilburys Vol. 1 is on my "Practically Perfect Albums" list.

Halliwax said:
WHAT!?!? no ones got any love for tom jones?!? 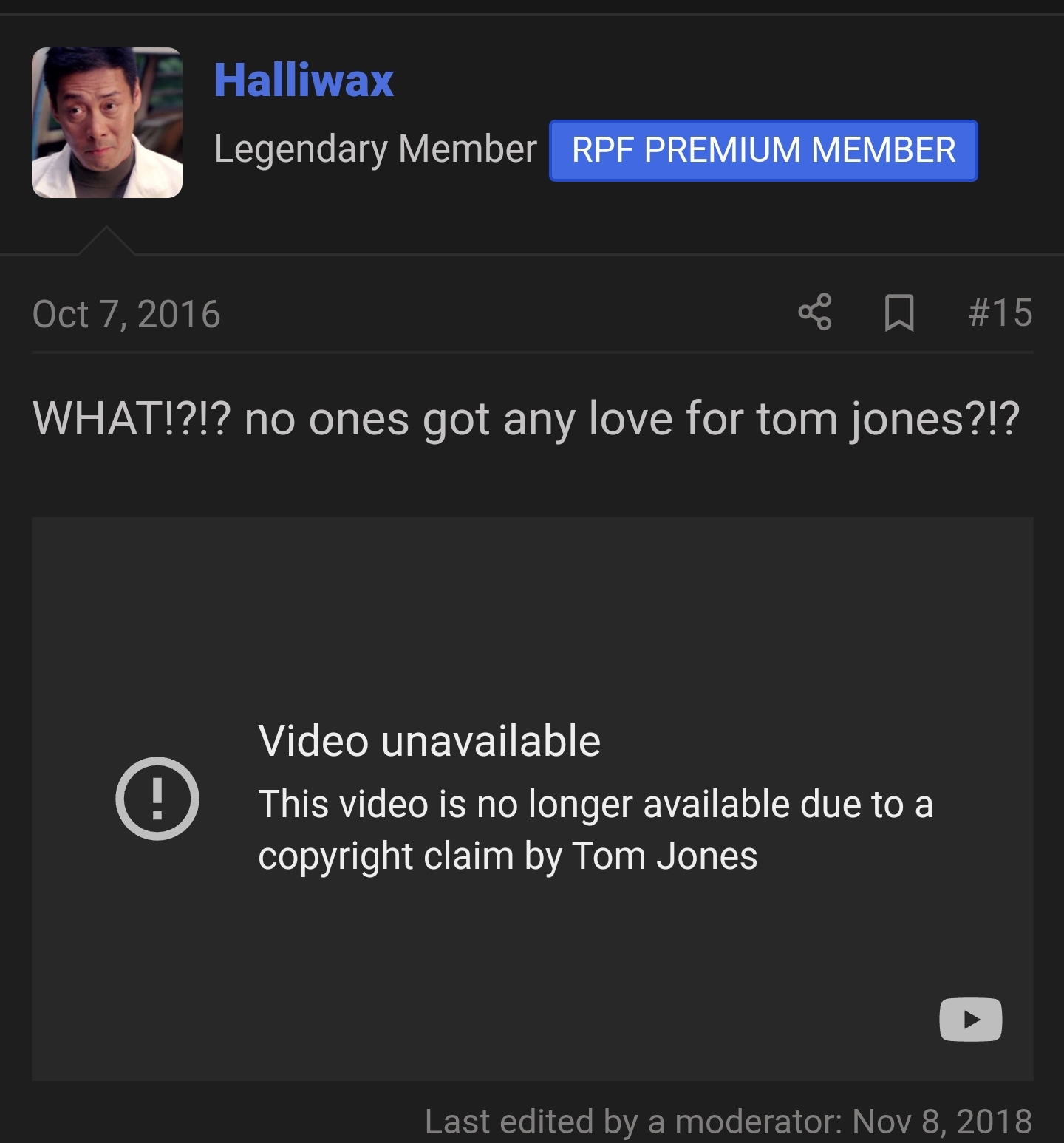 Even the mods hate Tom Jones...

sbaxter said:
Speaking of Christian Rock, here's a 1991 track from Chagall Guevara -- "The Best Band You Never Heard," (although you and I may have discussed them in the past; I seem to have a memory of having done so with someone here). They never explicitly identified their music as "Christian rock," but every member was and is a Christian musician working in that niche. I think they felt there was a de facto "glass ceiling" for things labeled "Christian rock," and they were hoping to get around that. They got poor promotion from their record company, so breaking that glass ceiling at large didn't happen -- although one song of theirs ("Tale O' the Twister") can be heard briefly in the Christian Slater film Pump Up the Volume.


These guys reunited a year or so back to finally finish several tracks they had originally recorded back in the '90s for a follow-up album we never got, and they have recorded some new songs for that as well. The new album, called Halcyon Days, should be out in the next few months.

An update on this ... the 30-year delayed follow-up album, Halcyon Days, has finally been released to Kickstarter backers in the last few weeks, and will get a commercial release at the beginning of July. The band is also playing what will likely be their last concert at the Ryman Auditorium the day after the release. This was largely an effort to release the stuff they had recorded back in the early '90s, although they did record a few more tracks to fill it out, along with a couple of one-off tracks (one was a B-side to one of their original singles, and the other was a track they recorded for a Mark Heard tribute album). In addition, they recorded a couple more covers for Kickstarter backers (for digital release only) -- covers of "Clampdown," originally by The Clash, and a version of REM's "Finest Worksong." The Kickstarter provided a CD of a 1991 live show they had recorded and left sitting for 30 years, the loooooong-delayed follow-up album, and a remastered version of their self-titled debut disc.

Anyone who reads the "Christian rock" description and cringes should reconsider. Unlike the band members' solo work, there is nothing explicitly Christian about Chagall Guevara's lyrics (except in their cover of Mark Heard's "Treasure of the Broken Land," but then that isn't their song, per se). It is present in the lyrical worldview if you know to look for it -- maybe a bit like listening to U2, but a little less overt even then -- but plenty of people enjoy it without ever knowing it otherwise. Most of it is what I would call fairly hard, guitar-driven rock, like what you'd hear in the video I linked above, with a few exceptions. Lyrically, though, they are all just brilliant. Lots of use of wordplay and clever turns of phrase, which is a hallmark of lead vocalist Steve Taylor's solo work as well. The one thing that really stands out to me is how unflinchingly, brutally honest they can be — these are songs where it sometimes feels like Taylor is standing right in front of you and calling you out with a steady, unblinking gaze. A couple of examples follow:

“Violent Blue” A driving rocker about two old friends who haven’t seen one another in a while. They shared a sense of purpose in younger days, but one has drifted (or plunged headlong) into cynicism and selfishness. Taylor sings “You seem a little tense, and I can’t help but notice how hard you appear when I look into your eyes of violent blue” and, later “So when did you throw out the rest of the world, deaf from the din of your self-righteous babble? I think you've been blinded by your own light” and then follows with “We were headed for somewhere, but that was before you traded in your peace sign for a finger … And I don't believe it's the way you were raised, or the cards you were dealt, or a poor self-image — I think you love yourself TOO much … You want to rule some sovereign state? You want to smother under all that hate?”

“Can’t You Feel the Chains?” concerns the end of a relationship (specifically a marriage, though that isn’t stated outright) from the one who was left behind. This one was on repeat for quite a while for me in the wake of the very sudden implosion of my first marriage. I’ve never heard another song that addresses so many of the feelings I had in that first year or so. Many songs address the heartbreak (and some add in a helping of false bravado), but this one encompasses the disbelief and befuddlement (“Will your bags remind you of home, and who you've left in hell? I can't take the thought of you here — I can't put you out. Close your eyes and look at me here, across the miles; look at me), the anger and bitterness (“And my mind is like a whetstone now, sharpening things — to throw), the sense of betrayal (“You can’t trust the ones you trust”), and helplessness (“as you turn to treason now — my hands are tied”) at the prospect the other person is willfully ignoring something that seems so obvious (“Can't you feel the chains, feel the chains? Can't you hear a voice behind the quiet? Can't you feel the chains, feel the chains — that keep us bound for life, my love?”).

Suffice to say, it’s all really good stuff. Everyone should have a copy -- or at least seek out their music and give it a listen and then decide.

Anyone have favorite cover bands? My two favorites are:

Hindley Street Country Club -- an Australian outfit that is a lot of fun. Some of the current and former members have additional cover projects as well, if you poke around for it: https://www.youtube.com/c/theHindleyStreetCountryClub/videos

RPF PREMIUM MEMBER
Recently been turned onto Blood Cultures. They've got only a few albums but they've got a wonderful sound. I think I like Happy Birthday the most so far.

Yesterday at 7:31 AM
joberg