This was just announced on their blog page.... Does anyone know more about this? The model will be 33" long, roughly 1/350 right? Electronics, etc.?

We do not have product dimensions yet. Please check our website for further
updates.

According to a reply from Amy of Master Replicas. It will be 1/350 scale, 33" long. No other info was given on functions yet.

RPF PREMIUM MEMBER
"Much... NICER... than the old Unobtainium..."

The product lists show two versions. The regular series and pilot episode. I would assume that if the pilot version did have electronics it would only be navigational lights,saucer and window lights etc. as the nacelles had the spikes on the caps and not the lighted spinners.

RPF PREMIUM MEMBER
The "first" pilot version, from "The Cage" starring Jeffrey Hunter, has no lights. Also note the spikes on the warp engine front caps, and the very large deflector dish antenna. In addition the bridge dome on top of the saucer is very tall.

The "second" pilot version, from "Where No Man Has Gone Before" starring William Shatner, has lit windows and navigation lights, and various other minor changes. Engine spikes, large dish antenna, and tall bridge dome are still there tho.

Here's the "production version" seen during the run of the series (although the first two pilot versions showed up regularly in stock footage, in many episodes).

RPF PREMIUM MEMBER
I am definitely getting one of these
J

With a MF coming and now a TOS Enterprise - looks like a second mortgage will be in order - these being my 2 "all-time" wish list pieces. I'd prefer to build it but hey - its too good to pass on. So hoping this will be true

RPF PREMIUM MEMBER
Yep they are going to be $$$$$

Well, if this turns out to be large, and lighted, then I'm in for one.

RPF PREMIUM MEMBER
I wonder if they are starting from scratch or using old molds from unobtanium or another source?

RPF PREMIUM MEMBER
Let's hope they are not using "old molds from Unobtainium"... that thing has got proportional problems. Plus it lacks the proper internal armature to prevent sagging and eventual self-destruction. :confused

This is what mine looked like after a year and a half.

I don't think MR will make the same mistakes as Unobtainium. They're aware of what happened with the last attempt to market a 33" Enterprise. They'll do the research and ensure that the materials are adequate to the task.

I came very close to buying an Unobtainium Enterprise, but when I heard that they were shipping them without anything to support the model but packing peanuts I decided to pass. A lot of people that received their Enterprise models had to return them due to poor packing. Historically, MR has some of the best packing I've seen.

Yep, I'll be making my credit card company very happy with this beauty.

Originally posted by phase pistol@Jan 6 2006, 10:51 AM
Let's hope they are not using "old molds from Unobtainium"... that thing has got proportional problems. Plus it lacks the proper internal armature to prevent sagging and eventual self-destruction.Â  :confused

This is what mine looked like after a year and a half.

Maybe I could get the god Apollo to fix her up for me. 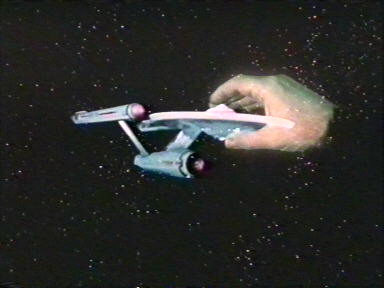 It looks like god Apollo stopped her too quick and her front end buckled under. :lol

RPF PREMIUM MEMBER
Hopefully MR folks check these boards now and then and see our concerns and wants on this long overdue wanted product.

I too was very wary of unobtainium and did not bite. I have FAR greater confidence in MR to deliver the product we want.

I dont know how others feel but sound effects are not something I would care about. Especially if it keeps costs down.

Great blue prints for her by Alan Sinclair are here......

MR ya out there? take a look at them. We know you can do it right..
G

This looks like another prop I can't afford. :lol :cry


Seriously, though, the shipping prices on this thing are going to be KILLER. It's not going to $5, $10, or even $15 per crate. It's probably going to be more on the order of $25 or more MINIMUM.

I hope for every buyer's sake that this replica model is shipped UNASSEMBLED and gets put together like the original shooting miniatures.

There's just no way this model will hold up IF it's assembled prior to shipping. Those nacelles have to be loose for the thing to make it through the mail.

The nacelle struts really are the weak point of about every TOS model kit I've ever seen. Unless they're properly internally braced, they'll sag just like the Enterprise in that poor guy's picture.

Obviously, the 11-foot shooting model was solidly built and has held up fairly well despite years of abuse by Paramount and the NASM (although it's in need of another restoration from the recent pictures I've seen... Hopefully, they don't overdo the repainting like the last restoration did).

You just know the hacker hobbyists will end up customizing the MR Enterprises any way...

As for lighting and sounds, I'd say there's fat chance MR will do this. Those features will add far more cost to the replicas than simple paint jobs. We're talking about a production run of several HUNDRED replicas, not just a few dozen. I've seen pictures of AMT/ERTL Enterprises that look just fine with painted on warp engine "swirl" effects. Again, I suspect people who want the lighting effects will have to modify their replicas.

RPF PREMIUM MEMBER
I would be underwhelmed with painted on warp effects- they need to light this thing up.

3d Printed 1:1 replica of the 11-foot Starship Enterprise from TOS