Is anyone an expert on Hogan's uniform from Hogan's Heroes?

Real A2's can get pretty expensive. A2 fans are as crazy as we are about details.

Mid range makers are around the $300 mark. If you have the build, you should go for the vintage tighter type not the baggy modern jackets.

Maybe have a look into these makers:

Hochstetter's was a Allgemeine SS Schirmmütze... again, it was not Gestapo.
M

Although the watch is never clearly shown, in fact in some episodes there is no watch - a Command Pilot of the USAAF would be issued a Hamilton, standard for pilots.

Decorations are incorrect for the period. Costumers frequently make errors in setup of military ribbons, likely that the available ribbons were used with the 'A' dress uniform, aka "Pinks and Greens", and because the uniform was seen briefly, "close enough" was good enough.
Based on the image viewed, these are the decorations :

Before you assemble the ribbons, double check the order of precedence, and be careful to ensure that ribbons are correctly mounted.

Medals of America can take the list and assemble it correctly, as to all devices and construction.

RPF PREMIUM MEMBER
It's 10 years later but I thought someone might still be following or using this for reference material...so:

I did extensive research and the best I can tell is Hogan's pants and shirt were authentic WWII "Pinks and Greens" His shirt had Capt wings over the pocket and Col Eagles on the collar tips as per regulation.
The jacket was Hollywood made repro which was also used in Von Ryans Express by Frank Sinatra (changing out the name tag and shoulder patch) Hogan had leather, sewn-on silver Col Eagles on the jacket shoulders and the Left sleeve had the regulation USAAF wings patch.
Don't know about shoes and belt. I suppose a standard WWII regulation belt with brass buckle will do.
I only found from here about FeatherWeight brand of hat and eventually found one. Keep searching eBay, WWII collectors forums and such. It cost about as much as any other similar 50 Mission Crusher (about $150 or so). I even spoke with Bob's son Scott who had the original costume, but he had given it away to an aviation museum and couldn't confirm the hat make. I contacted the museum who said they would check and get back to me...that was over 2 years ago.
I put together a replica cosutme consisting of: Featherweight 50 Mission Crusher cap, authentic USAAF shirt/pants/belt/pilot chest wings, Col. rand silver collar wings and for the jacket...
I contacted Wested Leather. I had them do a redesign of their Memphis Belle A2 jacket with the closest leather and interior I could to the research photos, I had a replica leather chest patch made and artificially aged it, found a set of NOS WWII Col (leather) shoulder eagles and an authentic NOS USAAF shoulder decal (I don't know If Hogan had a decal, some were actually painted on. Scott Crane said the finished product was amazing. Heres some reference shots (That's a replica WWI German Pickelhaube helmet just for that display 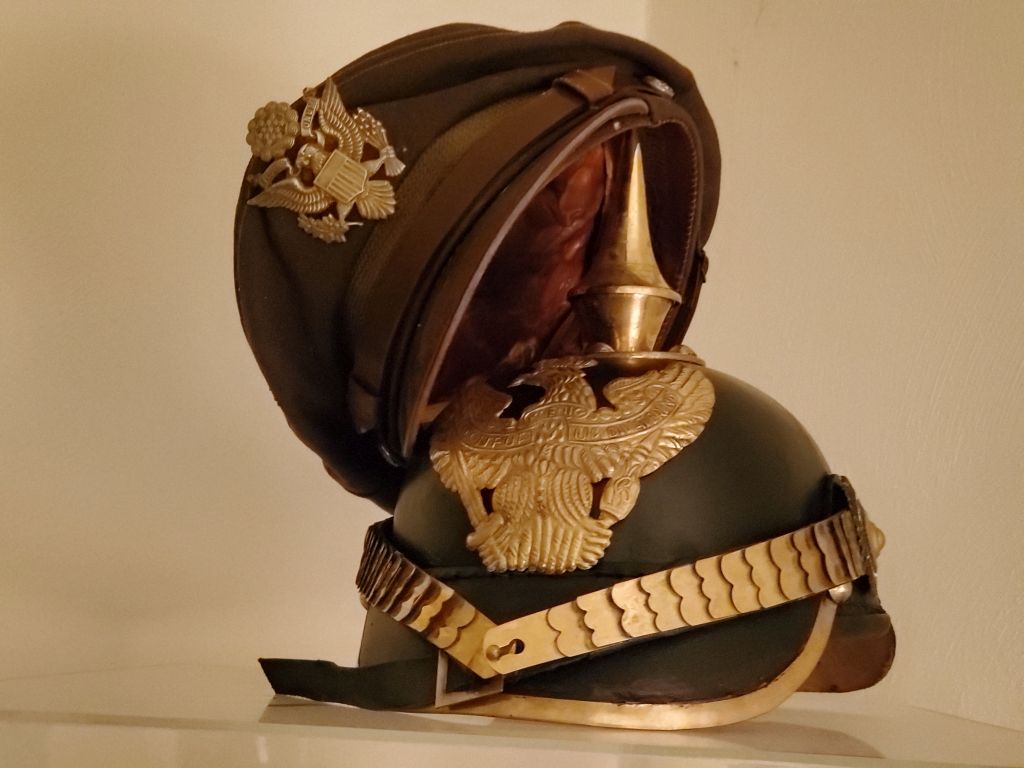 Ten years and I find my old posts. Anyway, the original props are at the Liberty Aviation Museum in Port Clinton, Ohio. I have pictures somewhere but you can probably just google the museum and find pictures. The jacket Hogan wore was not an A-2. It was a commercial near copy used by Frank Sinatra in... crap the movie title is alluding me. Missing the button down collar. His hat is not a true "crusher" but a standard hat with the stiffener removed. A true "crusher" will have a bill that folds in half because of single ply leather construction.

RPF PREMIUM MEMBER
Trotsky, the answers you seek are in the post above you. You are correct about the aviation museum here are the photos. 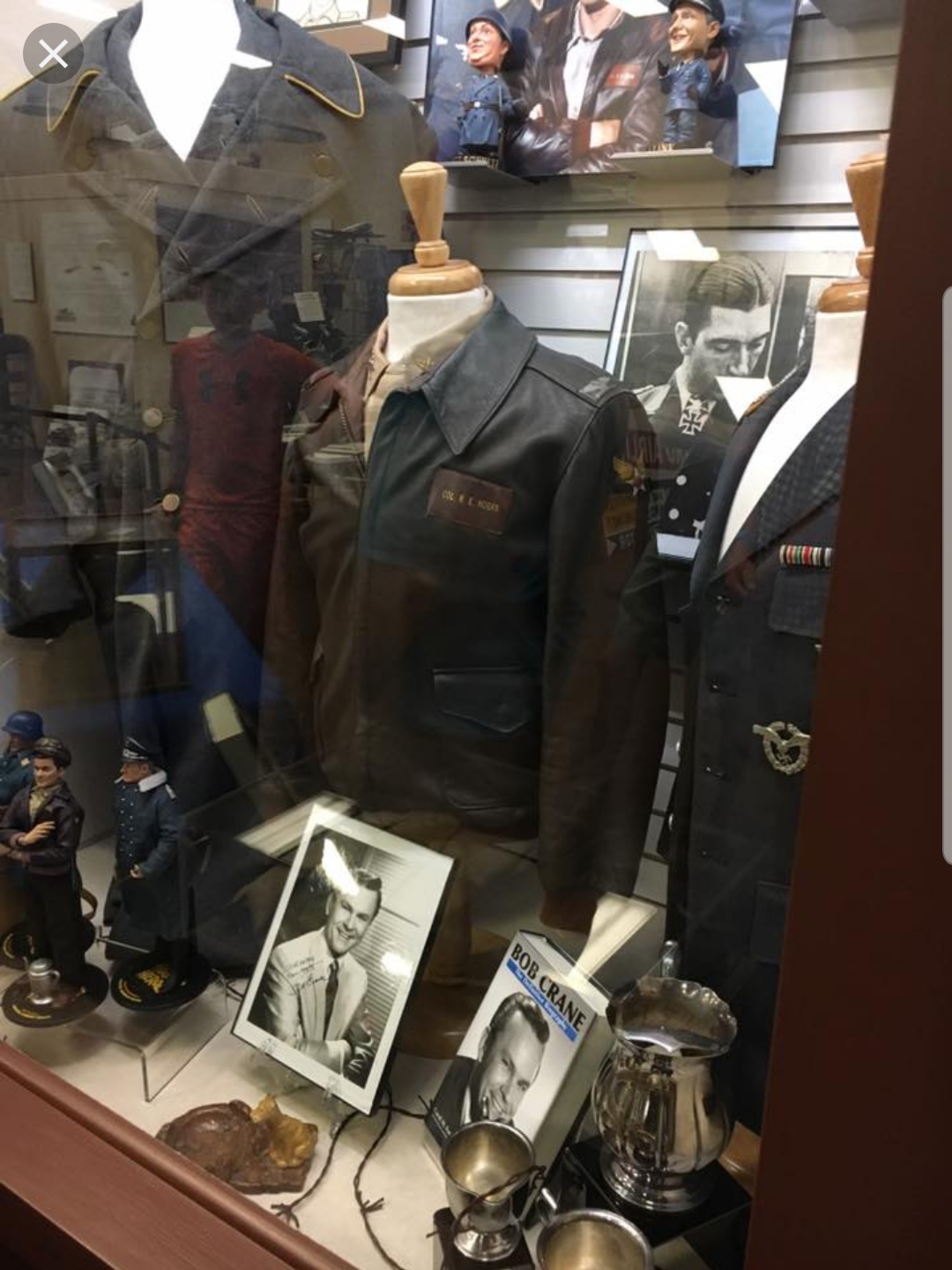 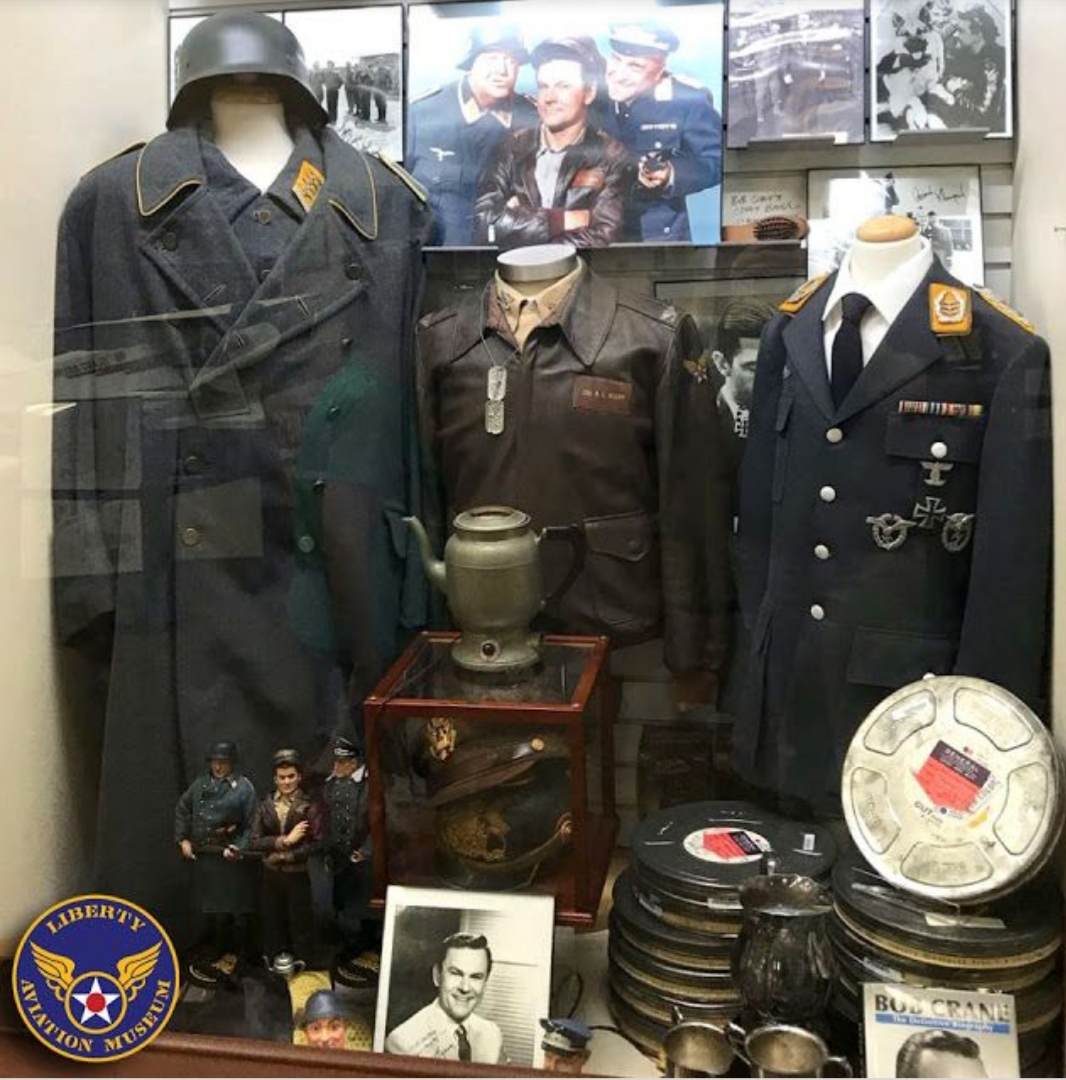 Total thumbs up for this. Great display, however from a museum perspective to busy...and storing all of those mixed materials together is a nightmare. The textiles should exist in one display with the bobbles and props in a separate case. The films and photographs are another situation. In any case, still really great. Anybody think there is a market for enamel pins looking like the R.E. Hogan patch???