I knew you would know. Yes, it was for a Space Rangers costume I never quite finished. Kinda like the show...

LOL.
Took me a few minutes to dredge that memory up.

Perhaps another question for the kids.

Did some more work on the Plasma Rifle.

It needed some color, so I put some leather on the grips and stock. 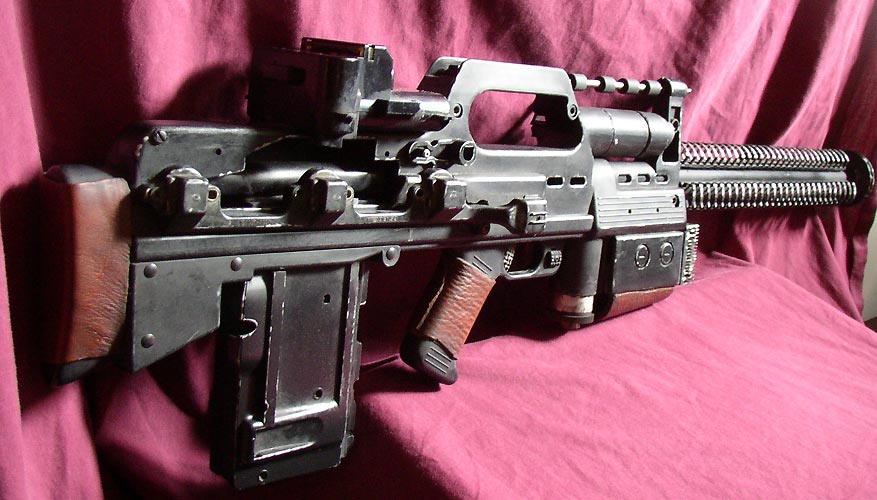 I hated the dead space in front of the carry handle, so I put stuff in there. 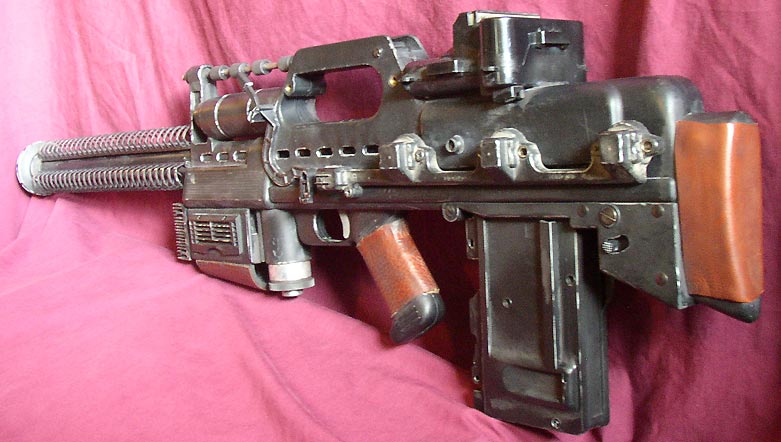 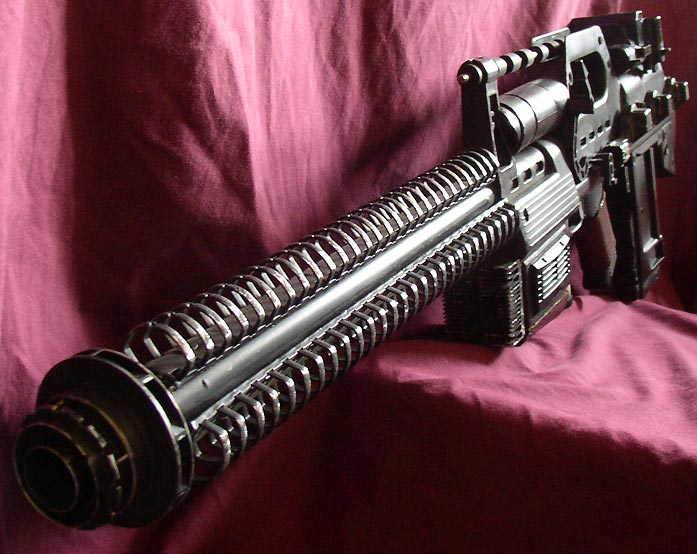 The business end. I used a moto tool coarse drum sander to take some of the black paint off of the barrel ribbing, so they shine a bit more and look more beat up. Ditto for the black heat sink on the front.


Oh yeah, you all still have one more chance to guess the other parts.

Re: "Phased Plasma Rifle in the 40 Watt Range." Part II


Ironhand said:
Did some more work on the Plasma Rifle.

I hated the dead space in front of the carry handle, so I put stuff in there.

Great design ideas. It turned out really nice. Do you ever lend out your work to film projects?

Awesome work! Some of your gun designs are really impressive and would make excellent movie props themselves. Thanks for the detailed breakdown of the components too, you gave me some great ideas for how to use some of the junk sitting around the garage

Great stuff like this is what happens when you set creativity free. cheers to you!

Harada357, Yellowjacket, Steamtech, blbarrett: Thanks so much for the kind words! Glad I could inspire, I really just do this stuff for fun.

To answer Yellowjacket's question, I suppose I'd be happy to loan stuff out to filmmakers, providing there was some way to guarantee they would come back, hah ha! But some of my friends are amateur film geeks, and I've had several enjoyable opportunities to pop into their productions and bring some of my gear along.

Finally back to props btw, yay! I'm brewing up a repro of some cool goggles that will probably become part of my Halloween costume this year, heh. 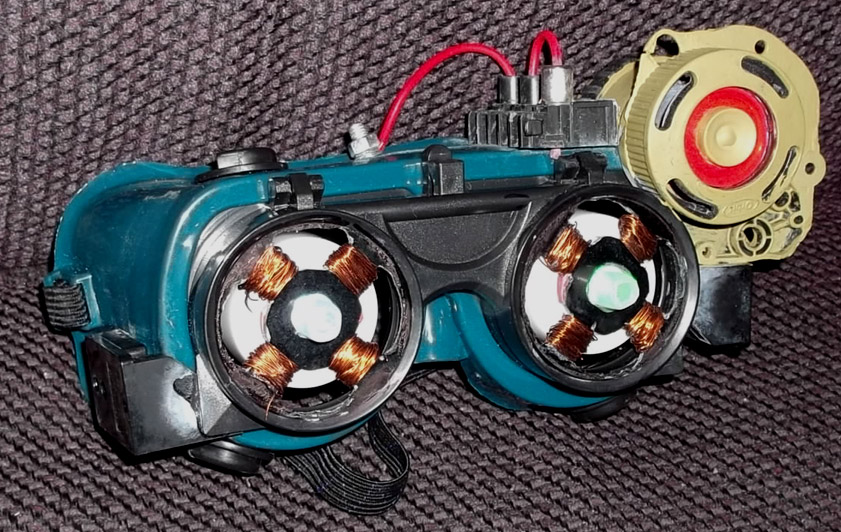 Oh yeah, they light up too. 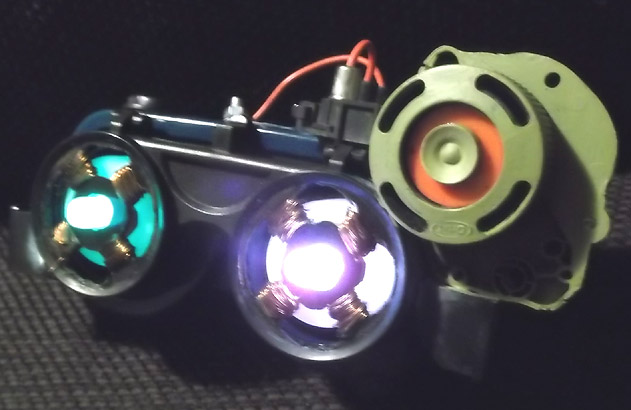 Not 100% accurate, but since there's no real prototype, I guess you could say they're the most accurate physical prop in existence?

Seriously though, the guy who does the concepts is great at bashing together all manner of real world hardware into impressive looking digital images.

Re: "Phased Plasma Rifle in the 40 Watt Range."


Ironhand said:
You're welcome to guess at the bits, and an extra prize goes to whoever can guess why I had a Muzzlelite shell lying around in my garage!

Great builds. The barrel on the muzzlelite . . . from 3 ring binders?

Yep, binder rings. But way more than 3-ring, they're like 20 ring or something.

Well, after finishing the plasma rifle, I wanted to revisit the Matson-Deyer Z-20, so now it looks like THIS:

I added some capacitor cylinders, some metal tape, a hard drive spindle, agressive silver sharpie edging, black suede wrap on the grips, and sanded all the anodized metal to get the shine out of 'em. I also stippled some dark brown paint into the crevices for weathering, and to tone down the extremely shiny bits. I'm much happier with it now, looks like something out of Bladerunner.

I even added an aluminum ring to the end of the muzzle. 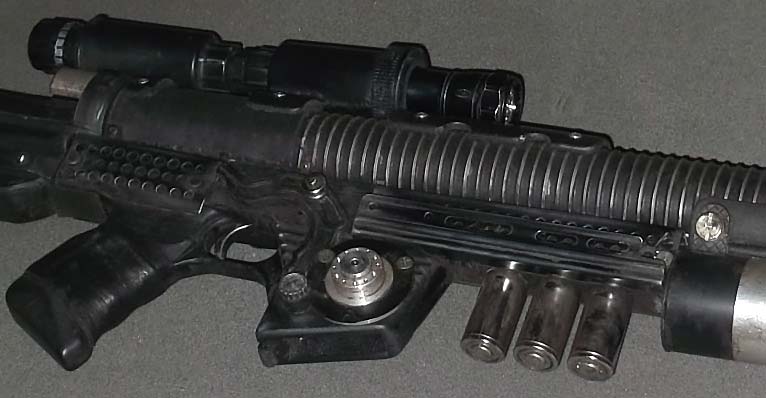 I really like how all the shapes and surfaces in the middle come together. Serendipity, and a good rummage through the garage...

Finished another prop for Gotham City Impostors: The Grapple gun, for your amusement. Just in time to harpoon-steal someone's turkey! 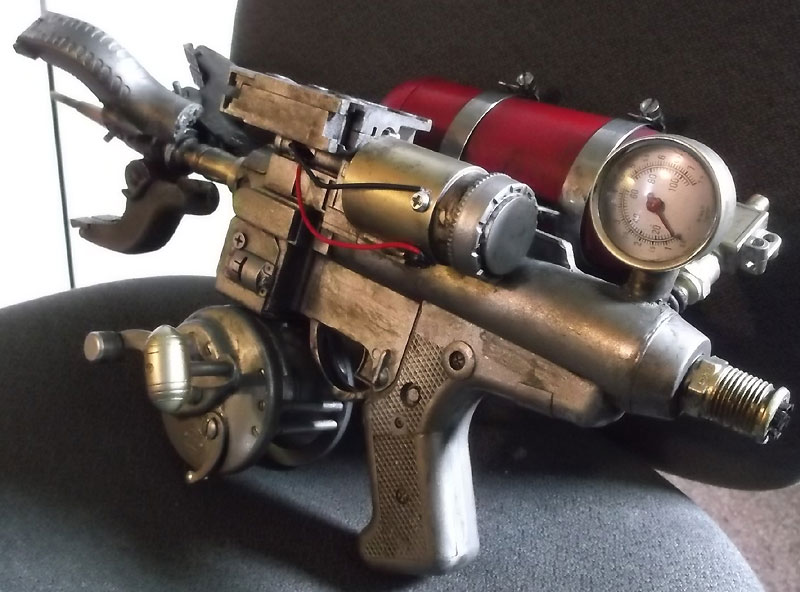 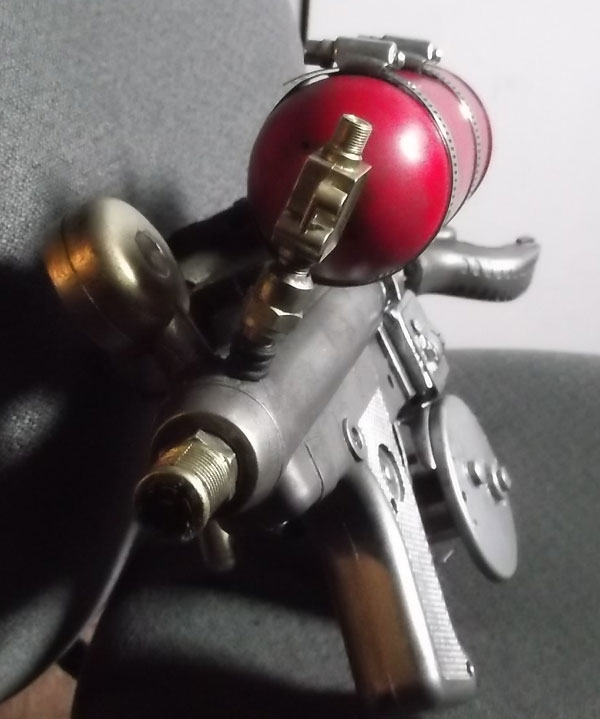 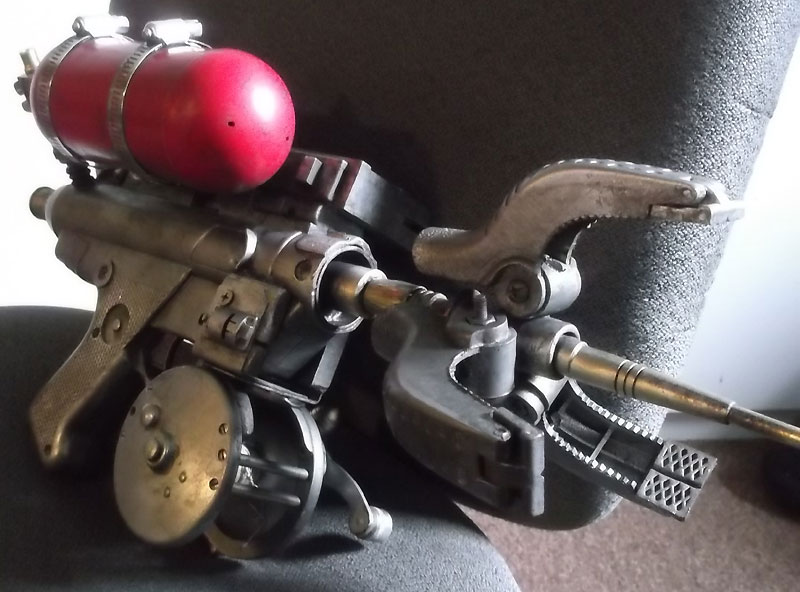 It's kinda hard to find shots of it from the game, but it is part of this MASSIVE image (the kilted Bat on the left is holding one):

So I've been seeing all these cool Nerf repaints, and decided I wanted to get in on the action. Plus our house is full of N-strike Nerf guns, and I wanted to see how cool they could look when they weren't dayglow orange. And of course, some minor conversions never hurt. I now present the results of the first batch, soon to be Xmas presents for the kids... 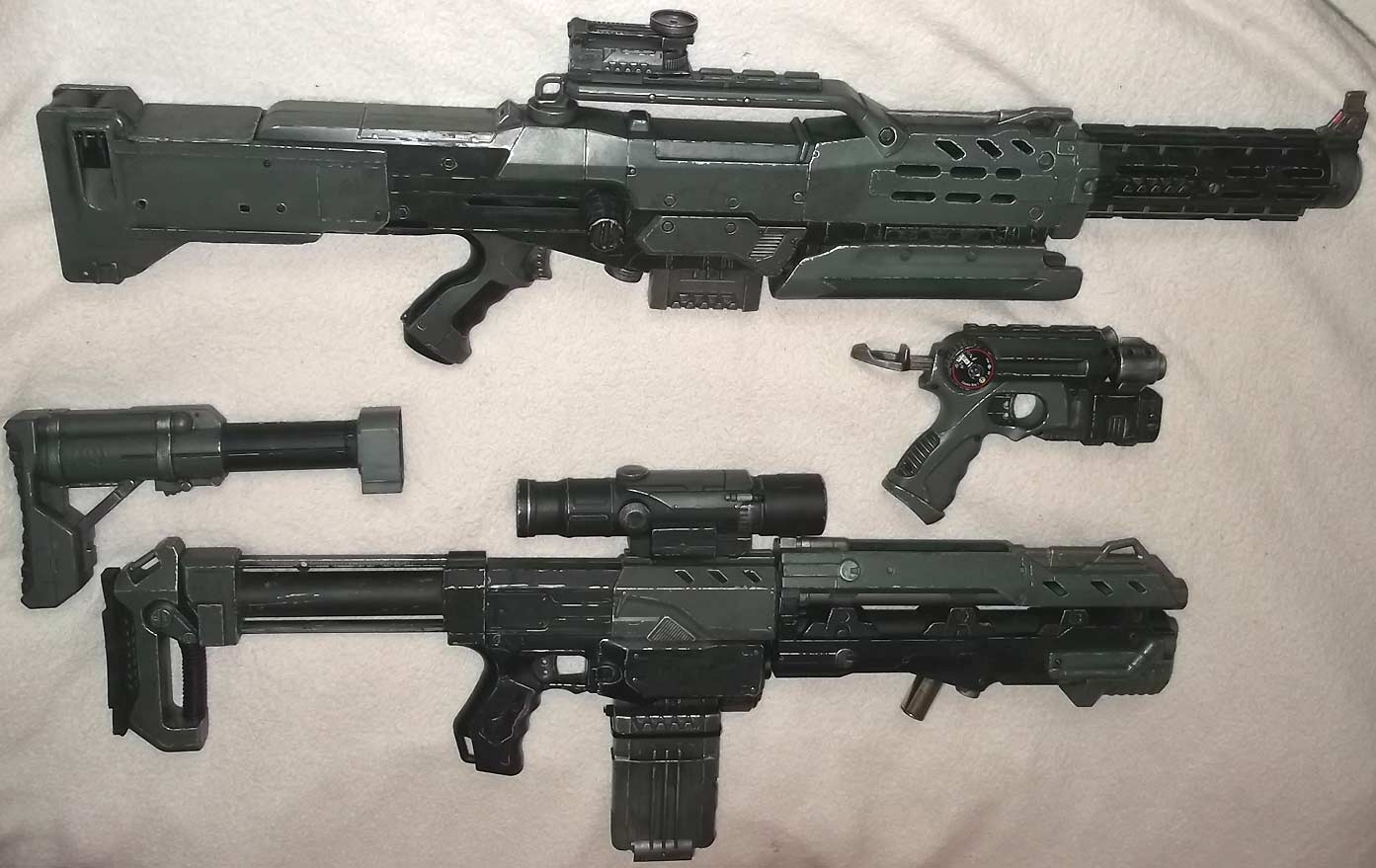 This of course is a converted Longshot, a Recon with a converted stock, and a converted Nite finder painted up with a sort of hard sci-fi military theme a la Aliens. I juggled the parts around for fun, since they finally all matched in color. The modular nature of the guns is pretty cool that way. 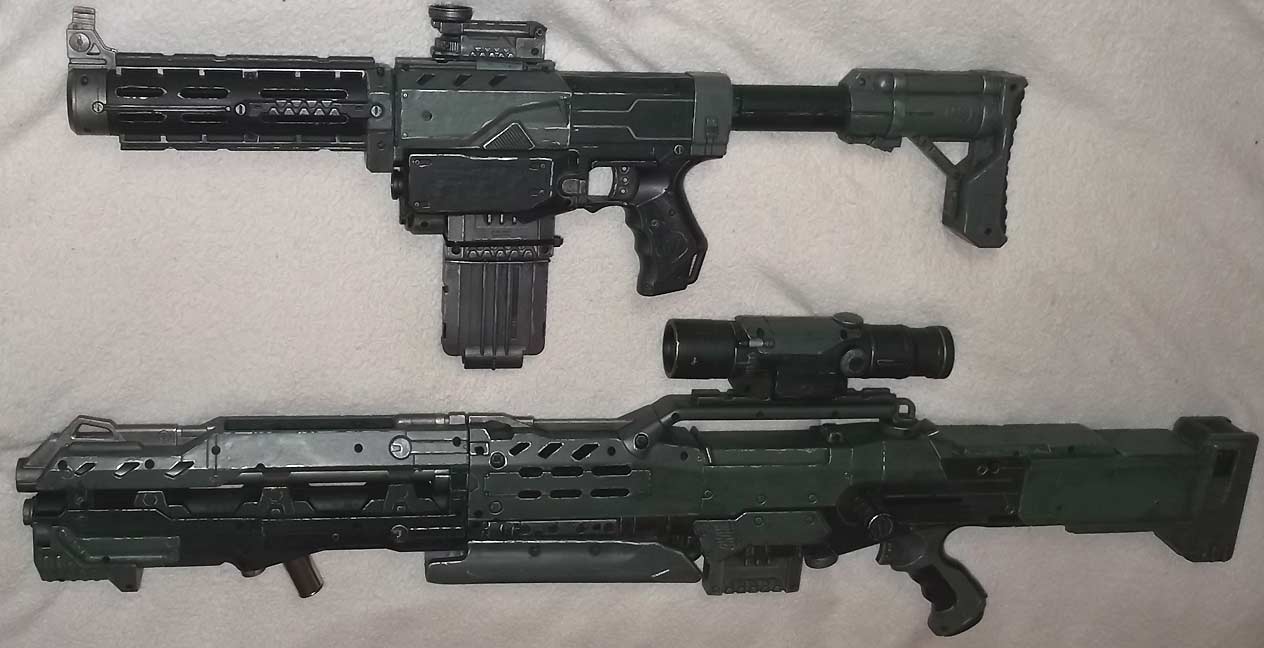 Here's the two main guns with their original parts configuration (aside from the conversion work, of course). Actually, the stock on the recon is from the Raider. Or was it one of those super soakers? The double mag is just two 6 shot mags with a zip strap to link them, plus some foam padding between them for friction.

For the Longshot, I removed the front grip and installed a cylinder instead. I also removed the bipod legs and replaced them with a Remington foregrip. I even installed a flashlight in there- because the button is on the back, you just push in to turn it on and off. I added a small set screw from the bottom to keep the flashlight in place. 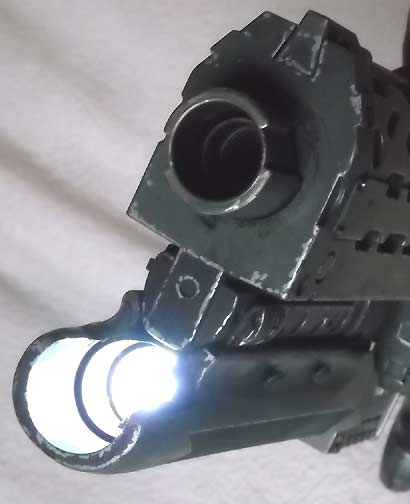 The stock is also completely replaced with this scratch-built one, made from the bottom panel of a keyboard, some ABS plastic, cylinders cut from PVC pipe, and some black foam padding: 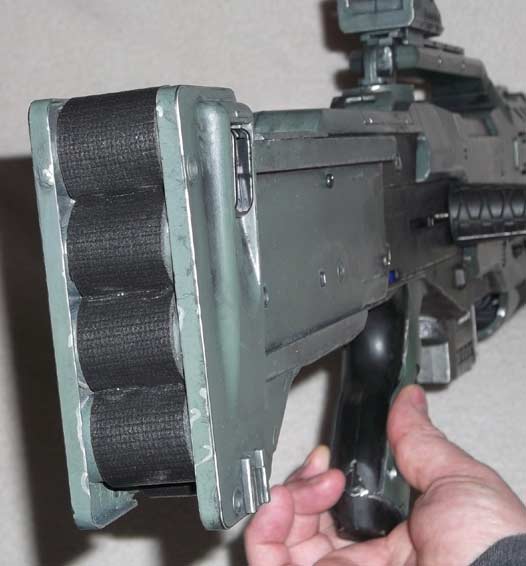 The Recon also got a modified stock. I cut down and rearranged the parts of the original stock, and added some tubing to give it more strength. I also added a cut down piece of floor mat for the rubber pad on the back. 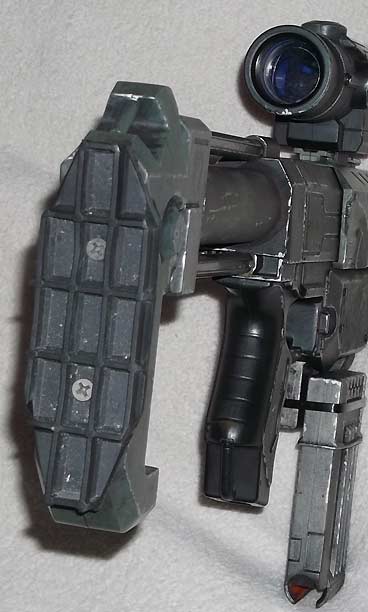 Here's a shot of the core guns. The Nitefinder is pretty basic, I just cut down the silliest looking bits, and added disc shaped details (actually bases from old Heroclix figures, heh heh). 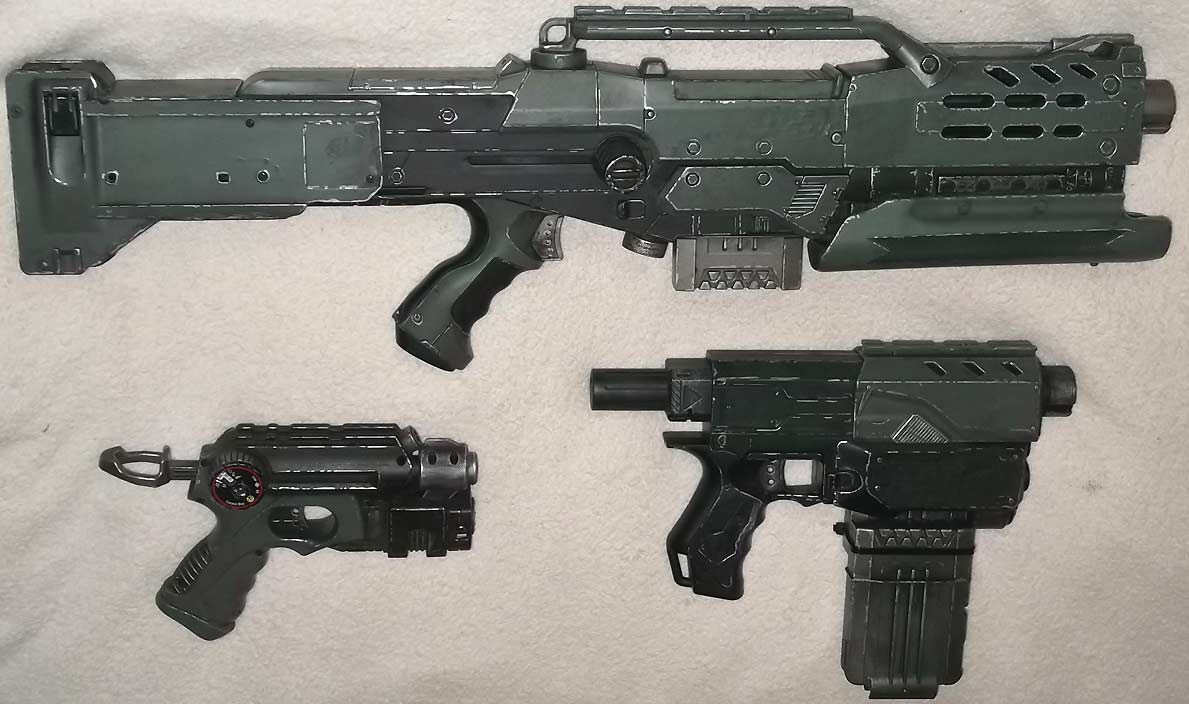 For paint, I sanded everything, primed with flat black, then masked and painted with satin olive (cheaper than the ultraflat camo paint, and almost as good looking), plus detail parts primed with bronze. To dull down and dirty up the guns, I used a mix of dark brown and black acrylic paint, stippled into the cracks and wiped / patted down with paper towels to remove the excess. Then to finish off, I used a silver Sharpie marker to stipple scratch marks on all the edges. A bit overboard, but it really pops out the details.

I might paint up an Alpha Trooper with the military scheme, since it can take the spare Recon stock (plus I already painted the drum from it). And of course, one of my Vulcans will be getting the military treatment at some point...

Especially for the more sci-fi looking guns (Another Longshot, a Firefly, and whatever else I can find lying around). I'll try to incorporate more cool protruding metal details in those conversions.

Got the first set of armor done. I'm very happy with it, though next time I'll try it out with grey clothes so you can actually see it! :lol It should fit the boys well enough, armor's pretty flexible that way.

You'd be surprised how cheap and easy it was to get this all together. Secrets revealed next post... 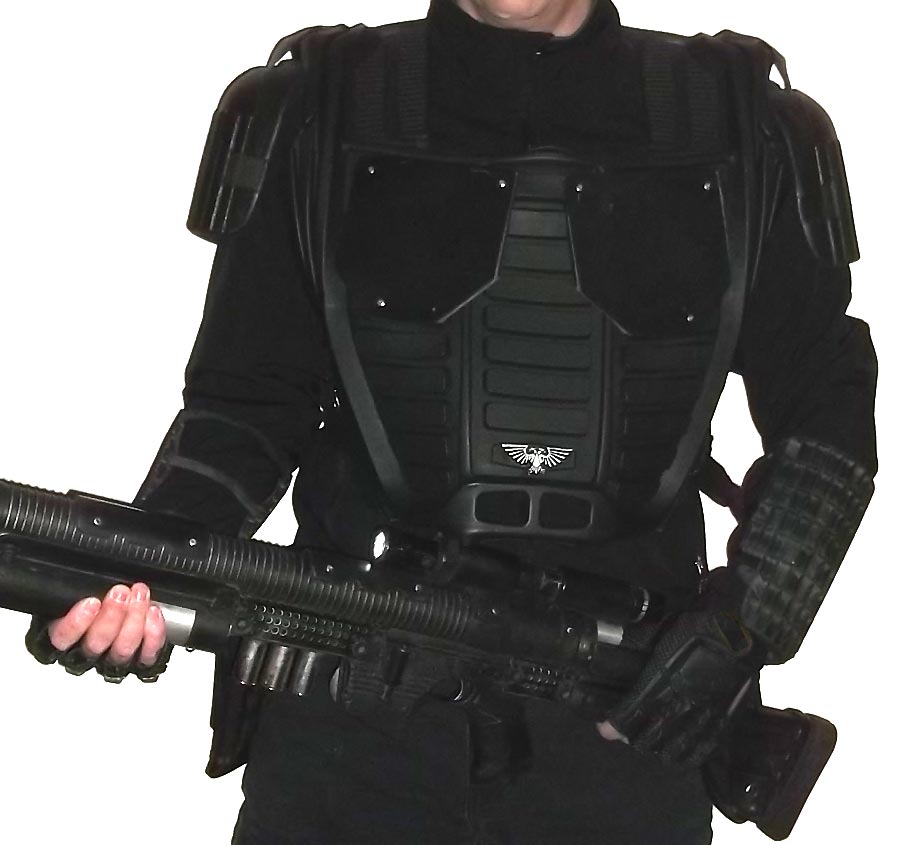 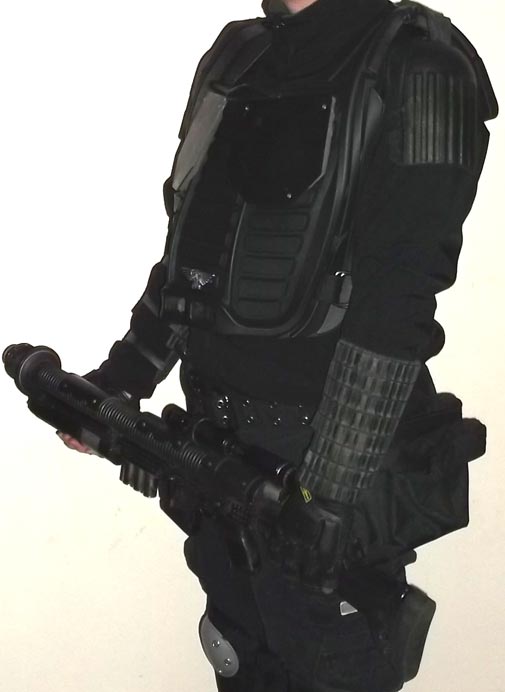 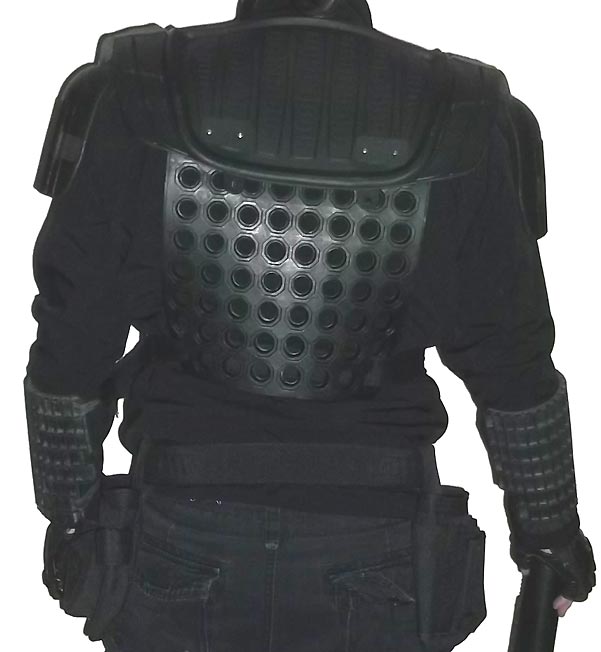 Those robots are giving me some ideas for my next costume.

So remember I said I'd how-to that armor next? I lied. (I'll still get to it eventually, honest).

Instead, we bring you... more NERF GUNS!

My favorite, the Alpha Trooper! With a Raider stock added. 18-round drum and foregrip pump make this a very satisfying and reliable clip-fed blaster. Get yours at Target today!

Okay, this isn't new, I just added a yellow stripe, and wrapped the grip with some olive green ribbon I found lying around. I like it better. Also I should mention the ribbed tubing on the stock is just electrical wire sheath.

But check out THIS baby... 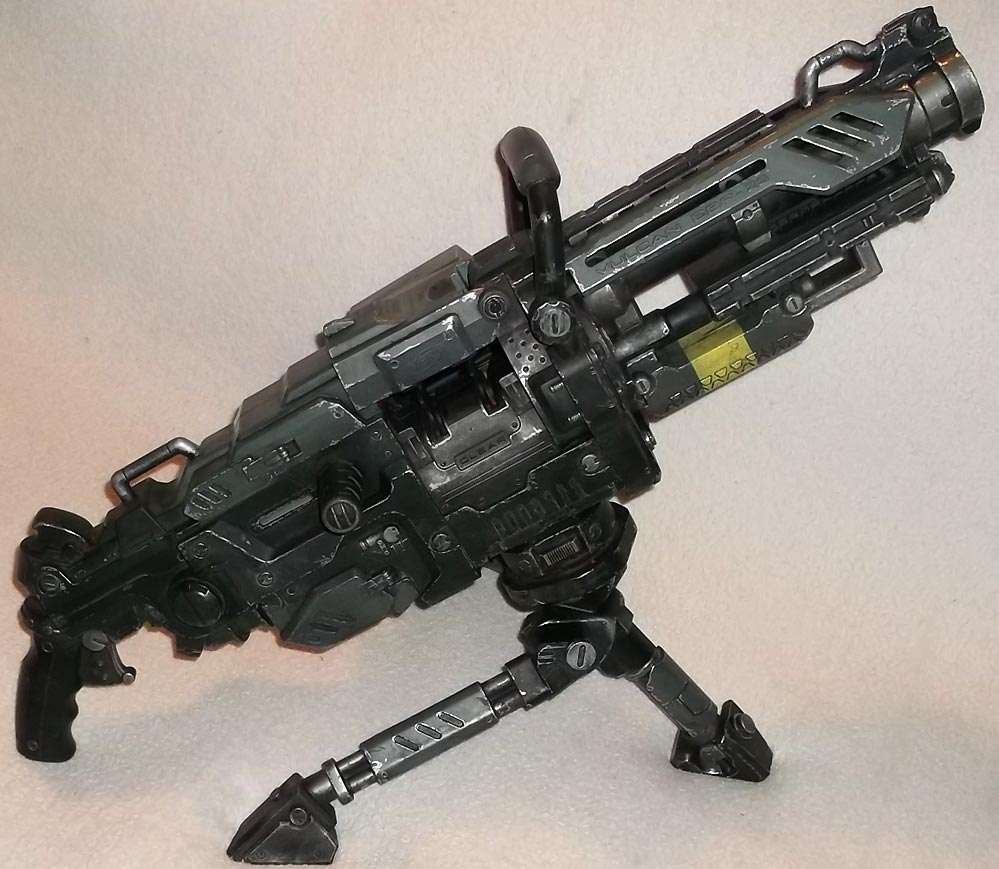 I didn't bother to paint the ammo belt, I wanted to make sure it didn't have any excuses to jam (plus the belt is grey anyway so it looks fine). Still runs sweet! 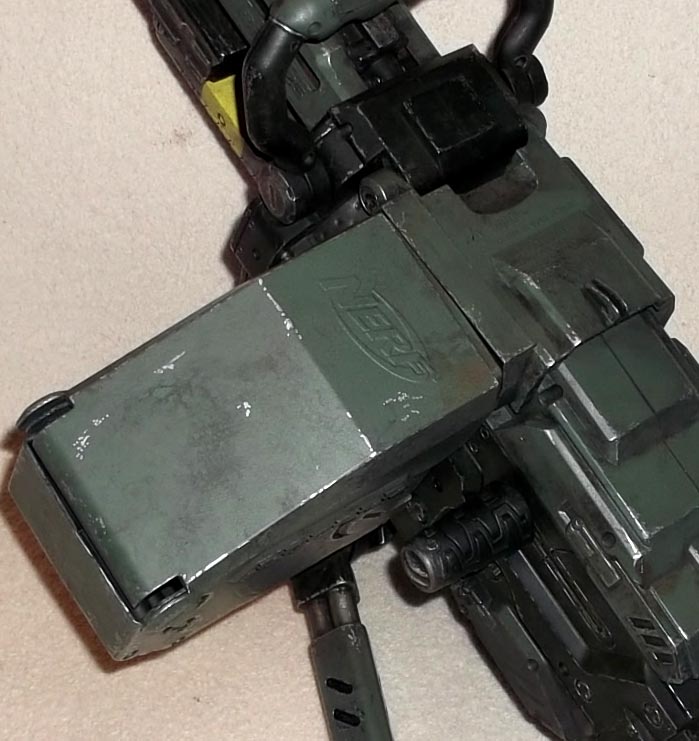 I did paint the ammo box though. The dirt is just black paint stippled on and dabbed with paper towel. I'm also getting better at the silver Sharpie metal chip effect. 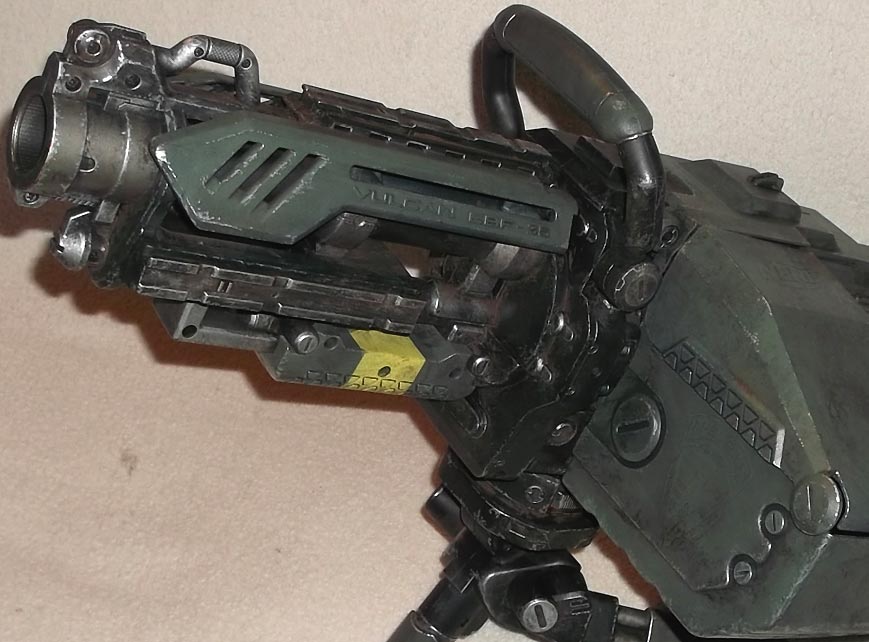 The business end came out nice. This was a pain to mask, but worth it. The metal parts are sprayed bronze, then edged with silver sharpie again.

That's all for now. Stay tuned on that armor update though...

Hmmmm... Car Mats for the armor?

Randy of AFTimes said:
Hmmmm... Car Mats for the armor?
Click to expand...

Works in the movies.

Sean's work is incredible especially his utilization of everyday objects.
You should see his Warhammer stuff.