This was one of those movies I always mint to watch, but every time it was on TV, I never had the time to watch it. Well, last weekend I went to the 23rd annual Ohio 24 hour Sci-fi Marathon, and this year among the films they showed was Forbidden Planet, along with a bunch of other Robbie stuff.

I love this movie. What a great old film. It still really holds up too. Plus it was even better because it was on the big screen. Not to mention, it was a pretty ornery crowd, so we had a lot of fun with this film. They even had an exclusive pretaped interview with Anne Francis. (the girl from the movie...... well ...... not so much a "girl" anymore. :lol )


Now, as usual, I have to own something from the movie. Well, a replica anyways. So, what's out there? Has anyone done the "blasters" or there little communicator thing? I know some folk were working on Robbie, did anyone finish one? How about the bottles of licker? That might be a found prop. What else is there?

RPF PREMIUM MEMBER
I have long been searching for a blaster, myself. I have heard of one or two people making noises about them in the past, but so far nothing. (hint: if somebody wants to start up a new project, I can blueprint it... :love)

Coyle has a page on the movie with a couple of prop photos. 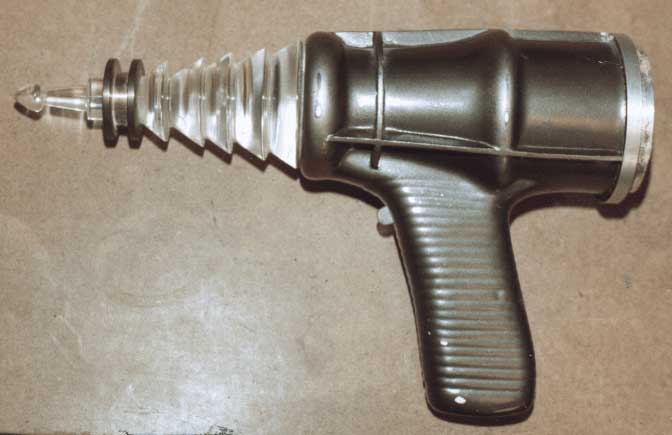 The rifle is a great prop too but no replicas are available to my knowledge.

As far as Robby is concerned, the "official" source is Fred Barton

...but that version has been idealized to a high extent... shapes are rounder, the legs are longer, the finish has been "candied" to a super reflective shine...

The original prop was considerably less spiffy. John Rigg of the Robot Hut in Washington has built several incredible Robbies including the entire JEEP... 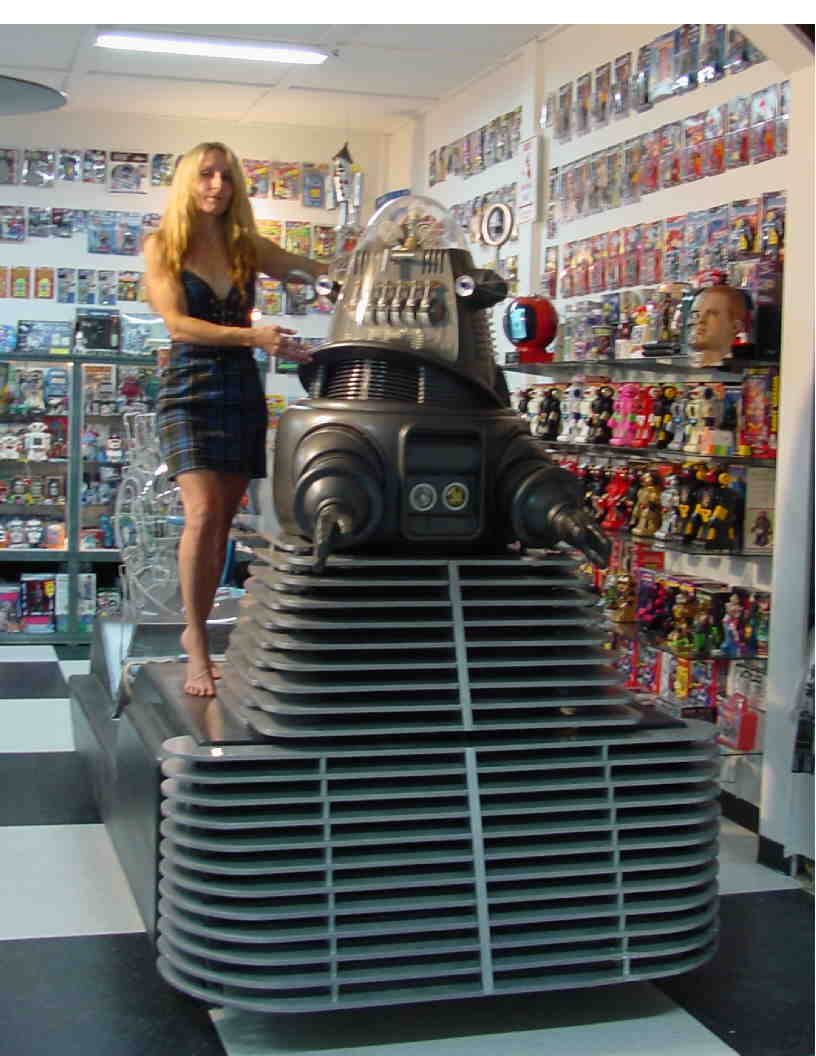 Interesting aside: in the shot where Robby "samples" the Genuine Rocket Bourbon, his arm is RUBBER. Only for that one shot.

The suit could not sit down, so for the shot where Robby is steering the C-57D, his legs are cardboard.

WOW. Great info. That Blaster is awesome. I had know idea it was so fancy. I would really long to have one of those in my collection. The transparent part closest to the body of the gun, looks like a Christmas decoration my grandmother used to have, but I wouldn't even know where to star replication it, or the rest of the gun. It sure would be great if someone picked this up as a project.

RPF PREMIUM MEMBER
I would add that I have seen the forcefield posts out there as well. I f you are interested in models, there is a 2+ foot Studio scale C57D out there I have seen with lit bottom. Also, there is a translucent Id monster out there (Monsters in Motion I think).

For what it 's worth, Fred Barton offers several Robby's for different price ranges and functionality. He is pretty approachable.

Who did the foam Robby a year or so ago (he and his wife/girlfriend won best costume somewhere as Altaira and Robby)? I would love to see pics posted on that again and maybe a brief tutorial

RPF PREMIUM MEMBER
Yeah there's the Polar Lights styrene kit of the C-57D that came out a few years ago, I forgot about that...

Excellent kit, getting harder to find and prices are going up. The kit has an interior too, very nice. The main complication tho is that the hull is in several big pie-piece sections, so you'll have big seams to contend with.

The blaster has got some very particular shapes to it. To me the main body looks like an old fashioned milk bottle like they used to deliver to you.

The "clear christmas tree" part has been done in replicas with flame-polished machined acrylic that looks pretty good.

RPF PREMIUM MEMBER
Here's my blaster after a little re-touchup. It has sounds too. It's very close to the real sounds.

Now, the same person who I got it off of here has kits available. As a matter of fact he was going to post a pic of all the kits laid out on the floor.

Now whether he decides to jump in and offer them is now up to him.

RPF PREMIUM MEMBER
I was just talking to this same person and suggested the same thing.
S

Gone but not forgotten.
I have the Coyle Blaster and Model of the C-57D.
I also have several versions of Robby, from keychains to the 18 inch talking version.

Had a T shirt likie my avatar, but it wore out...

Forbidden planet was on TCM this morning from 6-8AM. I watched most of it.....great flick.

Lunar Models also offers a kit of the blaster pistol and a 20" C-57D kit. I also remember a fellow in Florida who had a 48" C-57D replica that he tried to unsuccessfuly sell on ebay. It was described as having a lite fusion core and operating landing gear. Wanted $5000 for it at the time.

At last years Wonderfest, somebody was selling a full size Robbie kit for $3000. It was pretty rough but impressive to say the least.
J

My apartment is very small, and over flowing already, so as much as I would love to have a full size Robby, or a really big C-57D, they're both way out of my price range, and way to big for what space I have left. Are there any little C-57D's out there? What's the best little Robby? Also, whoever has those Blaster (kits, or finished) for sale, feel free to post.

RPF PREMIUM MEMBER
The best SMALL Robby is the 8" tall Medicom figure that came out a few years ago. Every part is articulated just like the real Robby. When you turn his torso all the tiny valves and whatnot in his head move. He also lights up (blue lights to either side of his head, and the mouth tubes).

He even comes with a little blaster but as you can see it's not a very accurate one.

There's also a "variant" version that has the pincer hands from that last scene where he's flying the C-57D.

The Masudaya is not terribly accurate and would need extensive modification if you want him to look like Robby.

Masudaya also makes a similarly "sort of vaguely accurate" B-9 from Lost In Space, in the 16" scale. They call him "YM-3" tho for some reason (the Robot was referred to as both B9 and M3 in the series). There's also a 4" windup toy as well.

Not an accurate model but a significant TOY, is the battery-powered tin "Mechanized Robot" from Nomura in Japan, released in 1956. This one from my collection is a replica by Osaka Tin Toy Institute (the real toy sells for thousands of dollars; even these replicas cost hundreds.)

There have been quite a few battery and windup tin Robby toys over the years... the most common of these (and the smallest) is the "Planet Robot" which you can get replicas of now for about $30.

Most recently, replicas of "Piston Action Robot" became available; this is commonly called "Pug Robby" by toy collectors because he's a bit stout.

Here are more from my Robby toy collection...

Wait... there is a person out there who has some nice blaster kits available???? :eek

Thanks for posting, but what the heck is up with that front part? Isn't the Christmas tree part, and the tip, supposed to be translucent?

Thanks for posting, but what the heck is up with that front part? Isn't the Christmas tree part, and the tip, supposed to be translucent?

"In the basic kit, the 'emitter' will be done in clear resin, but there will be an option to have it done in turned acrylic, at additional cost. Lighting effects will be included in the kit."

Sounds good to me.
J

here are a few of my Robby pieces most are shown in this thread .lots of tin and vinyl props.
the blaster has a photo strobe for a flash effect ,gives a nice retna burn.
The 2 foot Robby I did a custom set of voice tubes that replaced the tacky plastic piece with blue light wire it makes the mouth piece look like neon tubing.
the Ann Francis figure is the Jimmy Flintstone resin kit ,my paint job.
I also have a 1-1 robby head that needs attention(someday)
also I am working on the polar lights C-57D that is also lighted and will have functioning landing gear this is not yet ready for pictures.

The best SMALL Robby is the 8" tall Medicom figure that came out a few years ago. Every part is articulated just like the real Robby. When you turn his torso all the tiny valves and whatnot in his head move. He also lights up (blue lights to either side of his head, and the mouth tubes).

He even comes with a little blaster but as you can see it's not a very accurate one.

Wowser, anyone here looking to sell the Medicom Robby? I'm interested? Anyplace other than eBay might have it?

Also, how does the Linar Models Robby stack up?
J

Does any one know if the Robby in the new AT&T commercial is a replica, or the original?