Flexibility of design for custom Predator

Some costuming groups are rabid about accuracy, and not welcoming of people taking their own creative license with the costumes they build. What is the overall feeling of the Predator costumers in regards to this?

I ask, because I am leaning towards my costume being a blend of many different things I have seen. It will still look "Predator", but not like anything seen on screen. I much prefer the look of the Elder Predator, with the longer and more decorated dreds, as well as a much more armored Predator.

Custom preds are the best. Of course everyone likes to see the preds from the films but for me I like seeing custom preds because it's something new and different. There are quite a few people already in this board who have done custom preds so another wont hurt .

Got to agree, i prefer seeing custom preds. I imagine its harder to design something from scratch than something screen accurate. Imagine how boring it'd be if there were only like 15 preds every made all looking exactly the same.

I don't know if there's one general group-wide consensus on this, but within the Predator canon, there are five movies, dozens of comics, and a few novels to play with. And, we've seen plenty of variability in the movies already, especially with the new Super Predators that came out in the latest movie. So, I say go for it.

My particular Predator character, for example, is mostly based on the P1 character, but I also incorporated some design ideas, like the biohelmet and the color scheme, from the comic "Predator: Cold War". I'd like to do another biohelmet based on that comic, since the lead Predator in that series had a pretty seriously badass bio.

There are other groups out there that are more sticklers for movie accuracy, like the various Star Wars or Halo costuming groups. The canonical look of those characters hasn't changed between movies. You'd have a set of particular expectations for a Stormtrooper, for example, although different Stormtroopers have various accessories on their costumes based on rank and function and stuff like that. (And, you'd better get those right if you're dealing with people who are sticklers for accuracy.) On the other hand, if you check out our Completed Suit Trophy Room, you'll see that there's more variability within suits.

Use your imagination and show us what you come up with!

i think most suits on here are custom jobs and only a few are screen accurate.

Hayden - Hdogg's Chopper is the only one I can think of that was Screen accurate or damn close to it, that I have only seen 1 of. Alot of people have P1 & AVP costumes, Wolf really gained popularity primarily from 3 things - the missing mandible, the bio with the pred etchings & his dual casters. P2 is hard to find if not close to being Rare. I would say the general consenus is that while some go for amazing accuracy, you won't be criticized if you show up to a con with a damn good custom pred outfit.
J

Thanks for the feedback.

I'm all too familiar with the way certain other costuming groups view their costumes. I am very often held to some very stringent standards as I construct movie-accurate lightsabers (or even accurate replicas of sabers from comics or novels) for customers wishing to wear a saber with their costume.

Where I think I have a lot of flexibility is in the design of the helmet, as well as the armor and weapons. I'm working up a pepakura helmet right now (have another thread about that one I'd appreciate some feedback on), and I want to customize the helmet to set it apart from the standard design of the pep file.

While I want to maintain the "look" of the armor plating and the textures, colors, etc., I want to have enough flexibility to say...build a cool, custom plasma caster or a different set of wrist blades that still evoke the image of a Predator, but aren't necessarily canon.

Jon said:
Thanks for the feedback.

I'm all too familiar with the way certain other costuming groups view their costumes. I am very often held to some very stringent standards as I construct movie-accurate lightsabers (or even accurate replicas of sabers from comics or novels) for customers wishing to wear a saber with their costume.
Click to expand...

That reminds me of what my friend Jim entered in the CONvergence Masquerade last year. His costume was "Darth Laddie, Laird o' the Sith", and he had a custom-made plaid lightsaber: 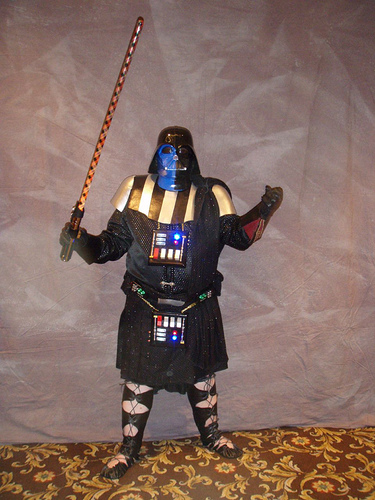 Even though it wasn't canon at all, he won the "Best Prop" award. The announcer also had fun, saying, "Later on, him and Ben McKenobi are going to duel to the death with light cabers."

I actually prefer custom designs, as the preds in the films all have been different while still belonging to the same species and culture.

However, I can see why so many choose to base their costume on the classics: it's the ultimate form of showing your love for the design.

Personally, I try to tap into the core of the predator design and go from there, trying to ground it in reality rather than fantasy.

You know, one of the things I've gone for is really just get what I can toward my goal then decide what I want to use and then make the rest. I'm ending up with a hodge podge semi-custom pred. (custom AVP12?)

Most of the people that see you suited up will just recognize the character, not necessarily what movie it might be (not)from. So, like what your creating and I'm sure we will too.