Good morning. First time posting to this site. Go easy on me.

I just started building the Atreides armor from Dune 2021 and hope you all enjoy so that I can get some fake internet points/transient dopamine hit. This build actually started with the Atreides knife/sheath, and while staring at screenshots of those for hours on end, I figured I could probably also make the gauntlets. 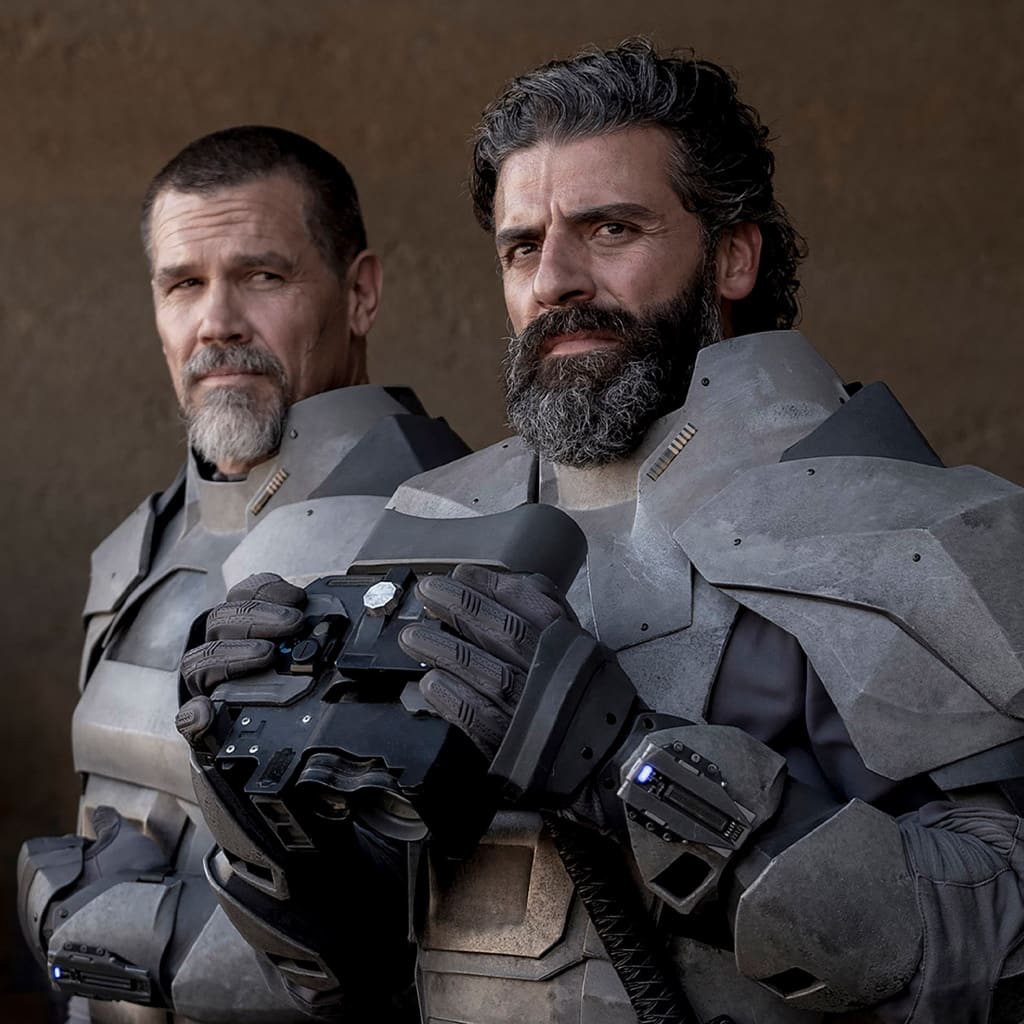 The screen used gloves are (I think) Mechanix M-Pact .5mm Covert gloves. These are $50 on the Mechanix website and they have writing on the index finger, so they won't work. Perhaps the film got some specially made. I opted for the M-Pact Grey, because they were $15 and still fit the theme of grey/black. Those are in the mail. While I waited I pondered how to make the gauntlet. I believes that they are wearing a long sleeve shirt/jacket, elbow pads probably sewn in, with a separate piece that fits over the sleeve, like a bracer. The bracer I think is a black piece with 3 separate grey pieces attached. In the above image it looks like one piece for the dorsum of the hand, one for the wrist, and another further up the forearm. It looks like there is another black piece underneath all this which they are all attached to, which makes sense for ease of donning, both for the film and for a real work scenario. What's easier, attaching 3 separate pieces of armor, or 1?

I haven't figured out this black base piece yet, but I did assemble the 2 grey pieces. I used a 2 layer system of grey anti-fatigue mat ($10 at job lot of harbor freight) with a layer of Fiskers self healing cutting mat on top ($50 for the 2'x3' piece, hopefully the largest expenditure for this build) I did this because I wanted this to be somewhat functional. The mat provides blunt force protection, and the self healing mat is pretty cut resistant. It won't stop a lasgun, but it might stop a slash from a Harkonnen blade. It's also light grey on one side and dark grey on the other, so if the paint chips off, it will still look mostly the right color.

Step 1 is make a carboard template, then cut it into the foam, slightly smaller then the template, then cut the self healing mat on the scroll saw. I couldn't find any pictures of how the black strap attaches to the black underlayer, so I went with double sided velcro strap. it looks good and is the simplest attachment solution. The strap is visible and goes through both layers of armor on the medial side (refer to your anatomical charts if necessary) but appears to come out under the self healing mat and on top of the anti-fatigue. To keep it all together I used a small black fastener on the lateral side. This isn't screen accurate but the pauldrons have small black fasteners so I didn't think one on the gauntlet would be too far from in-universe acceptable. The image below shows the rough steps I took, before painting (it's outside drying now). 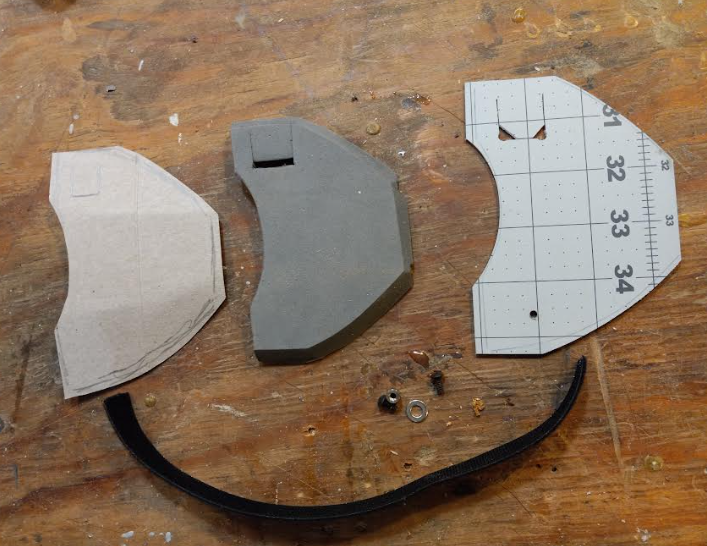 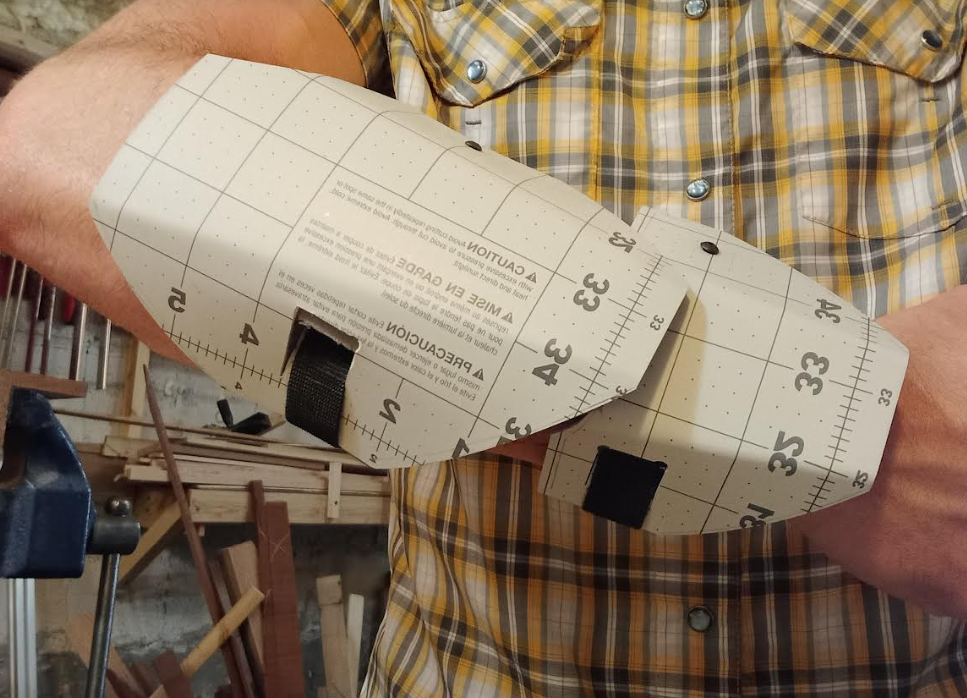 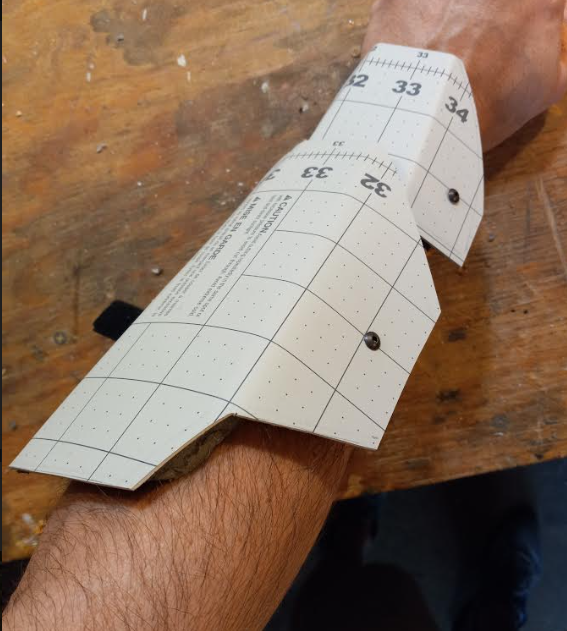 not great pics, but hopefully I can show you something more finished soon.

Just assembled the mostly complete L side. For the black base piece I settled on the self healing mat, which I will now refer to as PVC because that's probably what it's made from. I I wanted to save the PVC for exterior pieces but this seemed the best option, as I needed a rigid base that wasn't thick or heavy. I heated it in water and placed bands around it to get it to curve, though I could have done a bit more to form to my arm. The grey elbow piece was cut down in length, while it seems to me that you don't want gaps in your armor, this is how it is on the film armor, so that's what I tried to achieve. I used 'misty grey' chalk pain for the forearm pads, so that they don't look smooth and have that slightly mottled look. The dorsum of the hand is made of copper sheeting that my neighbor left outside for 3 weeks before it found a new home. This is attached to the forearm piece with 1/2" nylon webbing, riveted on. The webbing also loops around the middle and ring fingers, so that the dorsum piece doesn't flap around. 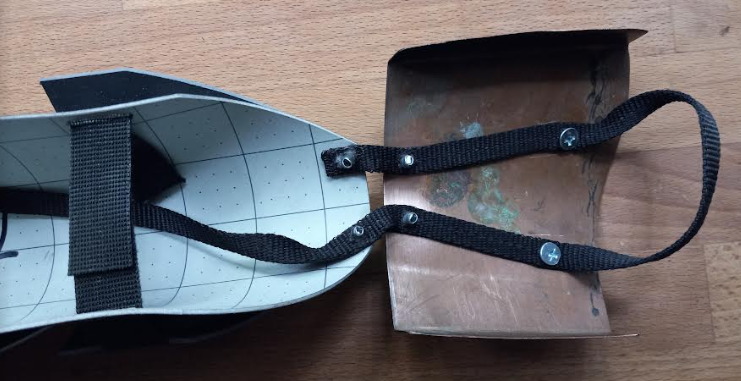 You'll notice 2 screws securing the webbing and popping up through the dorsum, aside from being a fiercesome backhand, the screws will serve as attachment for whatever I decided to do for the ridge that runs along the dorsum. I haven't figured this out yet. I feel like I need something pliable that I can sculpt. JB weld maybe? Ideas welcome.

I guess I'm mostly happy with how it's coming out. more to come. 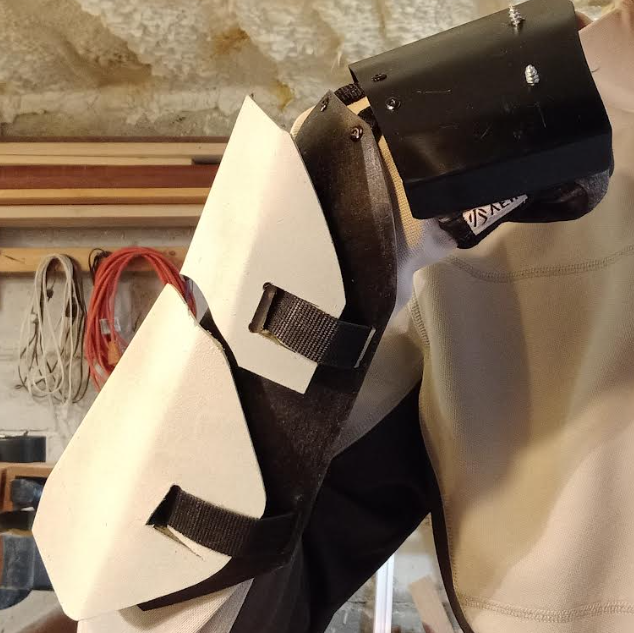 P.S. If anyone knows how to add tags to a post after it's been published please let me know. I tried to edit but didn't see a tags option. Thanks.

The screen used gloves are (I think) Mechanix M-Pact .5mm Covert gloves. These are $50 on the Mechanix website and they have writing on the index finger, so they won't work. Perhaps the film got some specially made.
Click to expand...

Welcome aboard.
Good catch on the gloves, I wouldn't be so sure on the specially made pieces though. One thing we've learned from pouring over the Stillsuit design is that some branding markings have been "wiped" digitally during editing and processing. It's very possible that they are in fact the glove mentioned just cleaned up for the final. On the ridged and organic areas of the armor, you may consider the use of 3D sculpting/printing. There are a couple really talented folks here on the RPF that may be able to assist. Really look forward to your progress!
Last edited: Jul 7, 2022
I

Part of this costume is the weapon, which is actually what started me on this path. Woodcraft had a kit of the Camillus Carnivore Inject, where you add your own handle. I ground off the saw teeth on the back, gave it an edge on the top spine, and painted it black. The handle is ok, except that I drilled 3 pin holes but lost a pin I think I'll redo the handle anyway to something more katana like, as in the films. This blade is not a replica so much as what you might call an 'in universe' prop. Gurney's blade is much shorter than most and there are at least 3 types of blades in the film, most of them being the longer style you see Duncan salute with right before he puts down 19 Sarduakar for a dirt nap. So let's pretend my blade is custom made for a specific soldier.

The scabbard is layers of 1/8" hobby ply, with 2 layers making up the slot for the blade, as the blade itself is 1/8" thick but actually a little more due to the paint layers. To make up the difference there is some nylon webbing going through the blade slot, and a metal spring clip on the back to attach to a belt. I think the hawk logo on the scabbard is recessed in the film, mine is flat black prayed over a sticker, which was placed on gloss black. The effect isn't exactly what I wanted.

I have to say though that this scabbard design is...dumb. It seems to me that a scabbard has 2 jobs: 1) protect the user from the blade, and 2) protect the blade from the world. This scabbard does neither. If you try to draw the blade but don't grab the scabbard properly, you'll cut yourself. The blade will bounce around as you walk and bump into chairs, walls, or your armor, which will obviously dull the blade. It looks cool...I guess...but it doesn't seem very functional.