And I've also been fond of the Dr. Evazan blaster. Which we all know looks like: 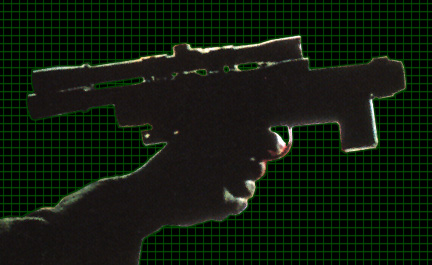 And is based on the Rexim Favor 9MM submachine gun. (credit to Parts of Star Wars for the pics):

Now Ponda Baba's blaster, according to POSW, is supposed to look like this, and based on the AR-Y Explorer Survival rifle.

Much information is given on the POSW re: the modifications, including a mention of the differences between the preproduction version of Ponda Baba's and the film version of the blaster.

However, I just recently watched that piece of the cantina scene and kept freeze framing, and it looks to me as though Ponda never even draws this blaster on camera, let alone do we see a shot of it.

The next thing we see is poor Ponda's arm lying on the floor, only now his flipper / hoof hands have magically disappeared and are replaced with werewolf looking hands, which are what are usually depicted on most action figures or representations of the character. But lying by Ponda's arm is his blaster, which is clearly the same as Dr. Evazan's:

So basically, it's a shared blaster. My question is where did the AR-Y based blaster ever get attached to Ponda Baba's character? I've looked for prepro pics of him with it and can't find a thing. And yet so many representations of him acknowledge the smaller mortar fin thing as HIS blaster. Where does this info come? Maybe Parts of Star Wars can shed some light? I'd love to know more info.

RPF PREMIUM MEMBER
You know, I was looking through the website last night and wondered the very same thing, Ponda Baba never really had a blaster on screen, I'd love to hear more insight!

The wolf man hand closeup was filmed much later as an insert shot.
They must have thought the flipper hand looked goofy in closeup and changed it.

On set Ponda Baba had the flipper hands and the finned blaster.
There are several promo stills from the set that show this.
Here's a good one...

Some interesting pics from the filming of the scene and insert shot...
The original ending of Ponda Baba (Page 1) - pittrek - September 5, 2011 at 8:27 PM - originaltrilogy.com forum
I never knew ol' Mr. Baba almost lost his head too.

I did know the insert shots were shot later, which makes the hand switch logical. I can see people looking at the flipper hoof, saying, "What the heck is that supposed to be?"

The whole scene is rather odd. There isn't much resolution, other than the severed arm and some groaning, which would lead us to believe Evazan and Baba survive--and which they do in the expanded universe story found in the cantina related anthology.

I had seen the shots of the potential beheading, but didn't recall the other blaster being used.

What would have made the most sense would have been for Evan's hand to be the one's shown on the floor since he was the one who drew.

Something else strange . . . in the one pic you posted, the way the finned gun is gripped, it looks to be in Baba's right hand, though his left arm is the one with a stump.

Bottom line, though, I guess is that the finned blaster never shows up on film and the Rexim is a shared blaster. Too bad, because I like both of them.

It's also interesting to me that Hasbro's latest rendition of my favorite Aqualish addresses the flipper and werewolf hand issue by giving you both options, as well as your choice of stumpy appendages: 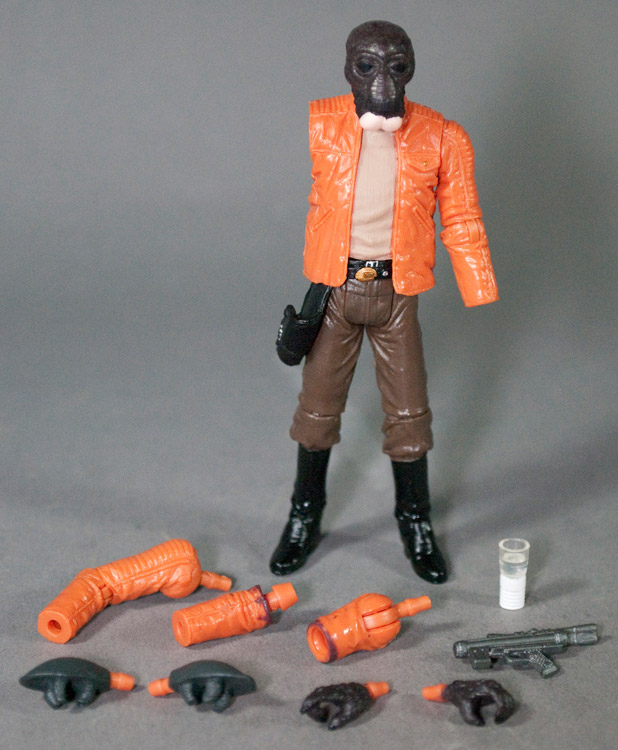 I also like how they address how with his flipper hands how he might hold a gun. Fingers on the inside of the flipper cover. 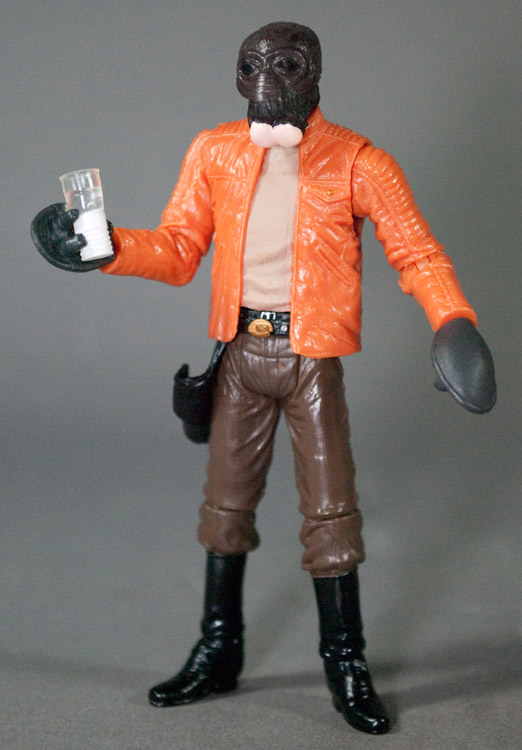 And I'll be darned, here's a cut shot of the shooters being cut , and there is Ponda drawing his never to be seen on screen blaster: