RPF PREMIUM MEMBER
After chatting with Tvayumat about the island mask that Wintergreen and Slade wear, I decided to do a "quick and dirty" build of one. The goal was to do it with stuff I had on hand, in a couple of days.

To start, I sculpted it out of wed clay on a resin sculpting armature I had. 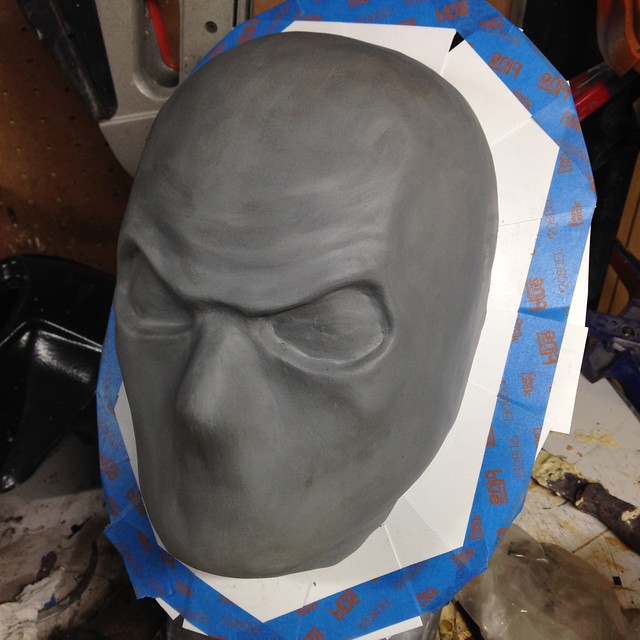 Then I molded that with some leftover rebound 25 silicone I had from prior projects. Despite being over a year old and literally scraping the bottom of the bucket to get enough out, the mold was good. I've never tried molding wed clay with silicone. I wasn't sure about reactions, so I coated the whole thing in thinned down vaseline first. I don't know if that was necessary, but it worked. 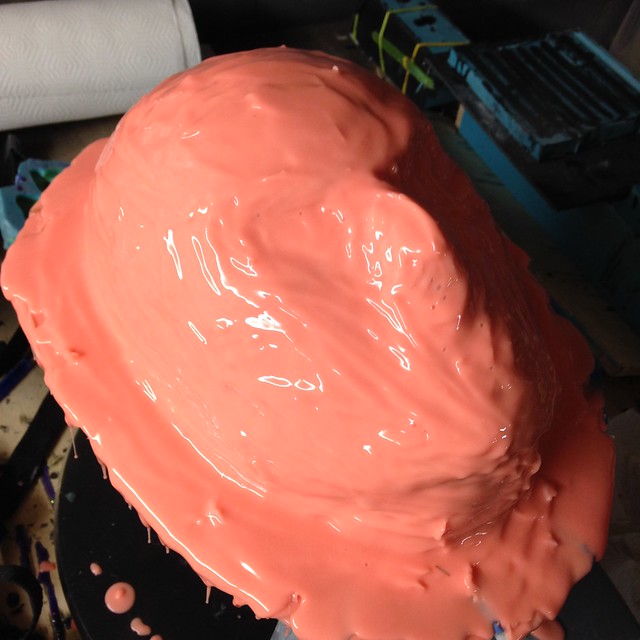 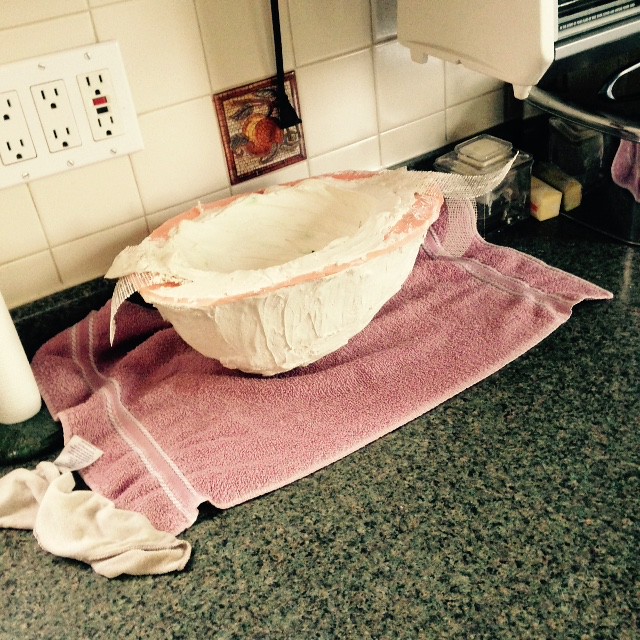 Casting complete, and holes drilled for the eyes. The plaster is about 2" thick, with embedded fiberglass drywall tape (again, using what I had on hand) 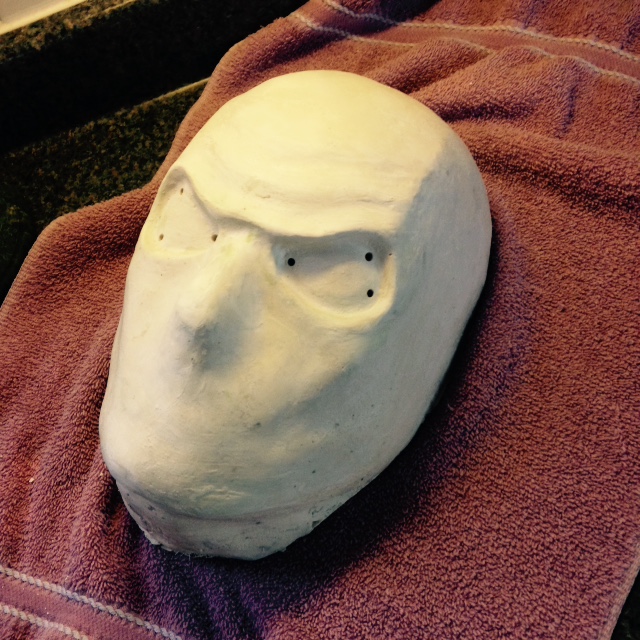 Pulled in 0.080 HIPS. The droplets are from rinsing it off after sanding. 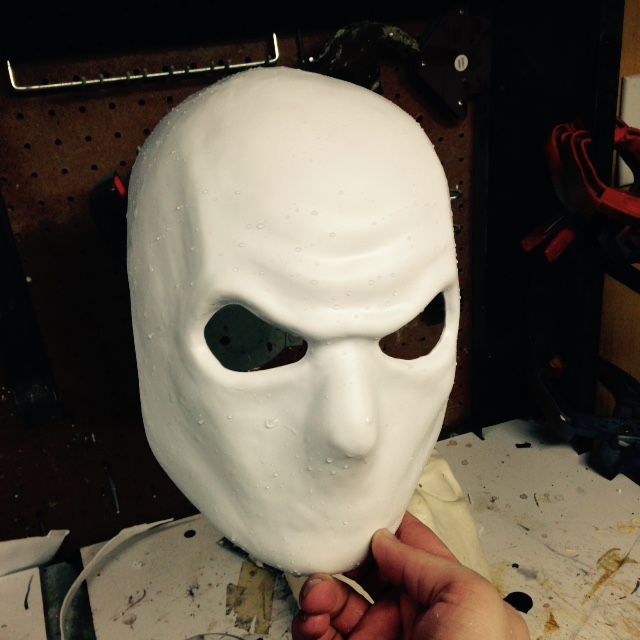 Then I made up a quick covering for it, attached with contact cement. 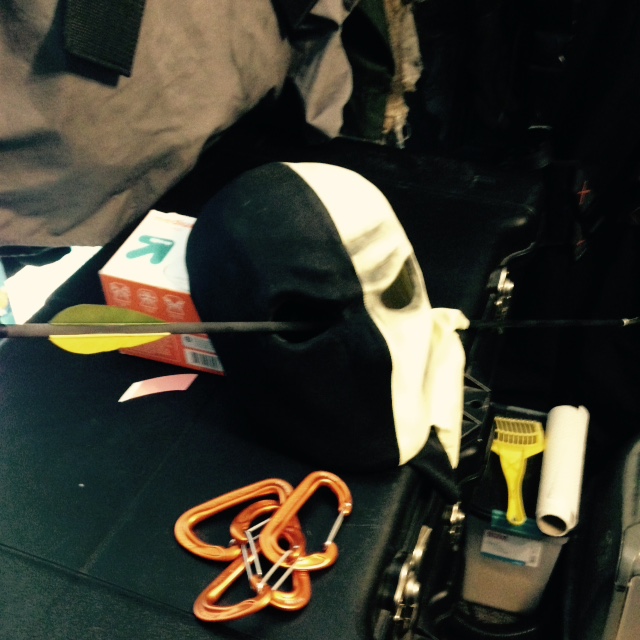 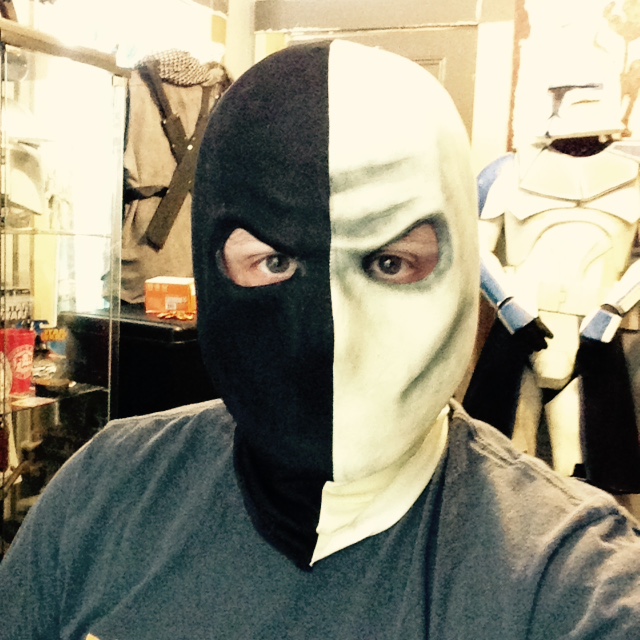 There are a few changes I plan to make:

So far though, I'm really happy with it.

On a related note, anyone know if there's been any research into Wintergreen's suit? Specifically his forearm guards. I've got most of what I need from Deathstroke, and think this might be a fun variation.
Last edited: Feb 27, 2015

Great work, I was searching this mask for a while :thumbsup

I've been continuing to work on the fabric pattern and attaching/painting techniques. Still going far too heavy with the black, but getting warmer. 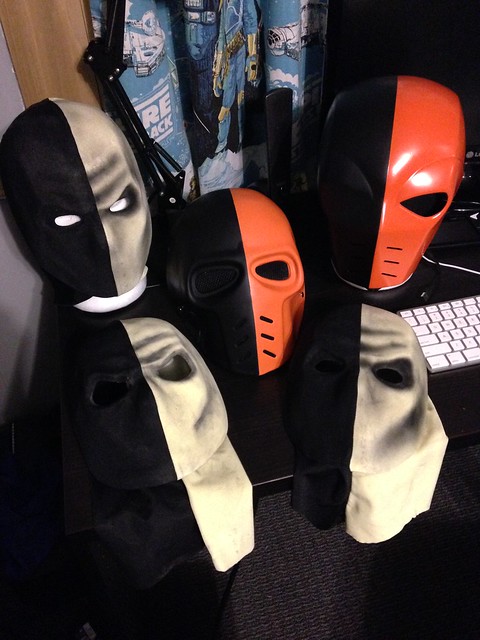 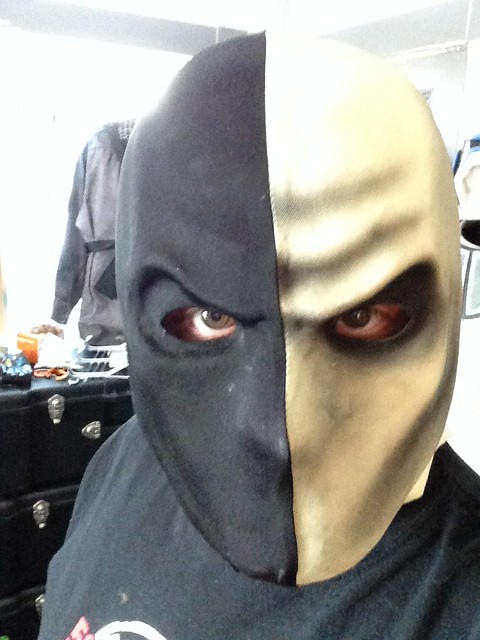 Some great info here. And some great work. I made my mask for last years halloween. But time was running low and it didn't get it 100% done. And since then I haven't touch it. Always wanted to make a more solid one like this one you've made. And with the info you so kindly provided, I'll give it a shot. Mine is made out of plaster and latex. Not so solid, hehe.

Keep up the good work.

Thanks! I'm continuing to improve the technique. I just ordered more black plastic, so the next will have a dark shell, which should darken up the yellow. I think that will be the final touch that makes me feel like it is finished!

Awesome work! You really have captured the look of the actual mask. I'm looking forward to seeing how the color changes on the yellow with the black shell. Great job!

With the mask out of the way, I've started collecting bits to make the full suit. This stuff was identified in the Definitive Deathstroke thread, but that thread has gotten all munged up with Island Slade, Wintergreen and Deathstroke:

The forearms look like the center of the Mizuno (or similar) pads were used, but a custom bracer portion was built. That's what I plan to do at least, since up close it will look better than just having a straight up knee pad on my arm.

The Rollerblade gear (that I got at least) has a bluish colored mesh. That doesn't look right, so I colored it black with a marker. In one screen cap I was able to see the Rollerblade logo on the elbow pad. They didn't remove the labels, they just colored over the words. I'm on the fence here... I want it to be accurate, but up close you'll see that, and I think it will look cheesy, I'm probably going to remove the labels. Similarly I'm considering replacing the velcro straps with quick clips to make it look a bit less rollerblady... we'll see how that plays out as I go.

The shinguards will get painted black. That's pretty easy. I'm not so into this suit as to try to track down the boots... I'll just wear generic combat boots.

I've already got the swords, both real and replica, from Slade. I'll just make a new sheath/bandolier.

I'm planning to make the grenades myself, rather than tracking down exact shells. Again, this is sort of an 'off duty' suit, so I'm not looking to really nail it 100%. A bit of time with a lathe, and I'm pretty sure I can make a convincing shell.

I have a similar drop leg holster, so I'll just go with that.

Boot knife looks the same as what I've got for Slade already.

Gloves look like Deathstroke's, but without the blue knuckles. Unfortunately this means I'll need to get a new pair for him. Not sure if I'll get the Oakley ones or something cheaper yet.

My black plastic is in the mail now, so hopefully I'll be making a new black shell this weekend (assuming it arrives on time!)
V

Will this be for sale?

RPF PREMIUM MEMBER
Can you give some Infos on the swords I mean the relpica ones what does that mean would they be safe to go on cons?

RPF PREMIUM MEMBER
I made the replica sorts out of 1/8" styrene. The real swords are super cheesy to begin with. They are basically just flat steel bars with some areas cut out. I took one of the real ones, traced it, and made 2 plastic ones.

The real ones were like $25 a pair, so I pretty much just bought them to be templates.

I have since completed and sold this costume.... wow, time flies