teslabe said:
Thank you very much for the kind comment..... What you see in the last video is a line by line responce of a "bmp", bitmap, drawn in Gimp and saved in "C" and imported into Arduino and controled with a Teensy LC, for larger image files greater then 24x575, I would use a Teensy 4.0 with more memory. For now gray scale affects the color of the NeoPixels. After my move I will sit down and figure out what is happening. I'm sure it's just a case of saving the file without color information.....
Click to expand...

Since I wrote it, I can easily clarify what it does.

The width in pixels is the number of LEDs. Each row is what the LEDs are doing. Brightness is the brightness of the LED, and the color is the color.

Think of a player piano, go row by row, top to bottom, what isn't black is lit.

So here you have three things going on, a single pixel starting on the right, moving towards the middle then back to the right.
A wider point of light, brightest in the center that wiggles left and right on the right half of the display
A pulsing light that starts as a single pixel, then blooms into a bright point, several pixels wide, that fades out again just left of center.


Then when it reaches the last row, it repeats the pattern. Length of the pattern depends on how much memory you want to assign to it - probably hundred or thousands of rows can be used.

No math, or weird formulas required. If you can draw your pattern in Gimp or Photoshop, it'll run the pattern on the LEDs. GIMP is recommended.

It'll also do the same thing in full color if you draw the BMP in color. The current version reads the image from flash (or PROGMEM). I can easily make it read directly from a BMP file stored on an SD card as well.

You can use this for effects like putting a "sparking effect" in the engines like on the Millennium Falcon. Make the BMP say bright blue/white, but at 50 or 75% intensity (still absurdly bright with these LEDs). Use the spray can tool with pure white and spatter it on the image. Play it back and you'll get the blue engine lights with subtle white flickering. More flecks, more flickering, bigger gap between engine brightness and white flecks, the more pronounced the flickering will be.

Good for people who have great Photoshop skills but don't want to code. So... no coding required. Import your image, build the code & load onto the arduino (or teensy, or ESP8266) and plug it in. Done.
Last edited: Jun 25, 2020

RPF PREMIUM MEMBER
Ahhh! Very clever way to do it. And easily adaptable and flexible!

That setup would be awesome for a build of the Close Encounters mother ship.

I was just thinking that 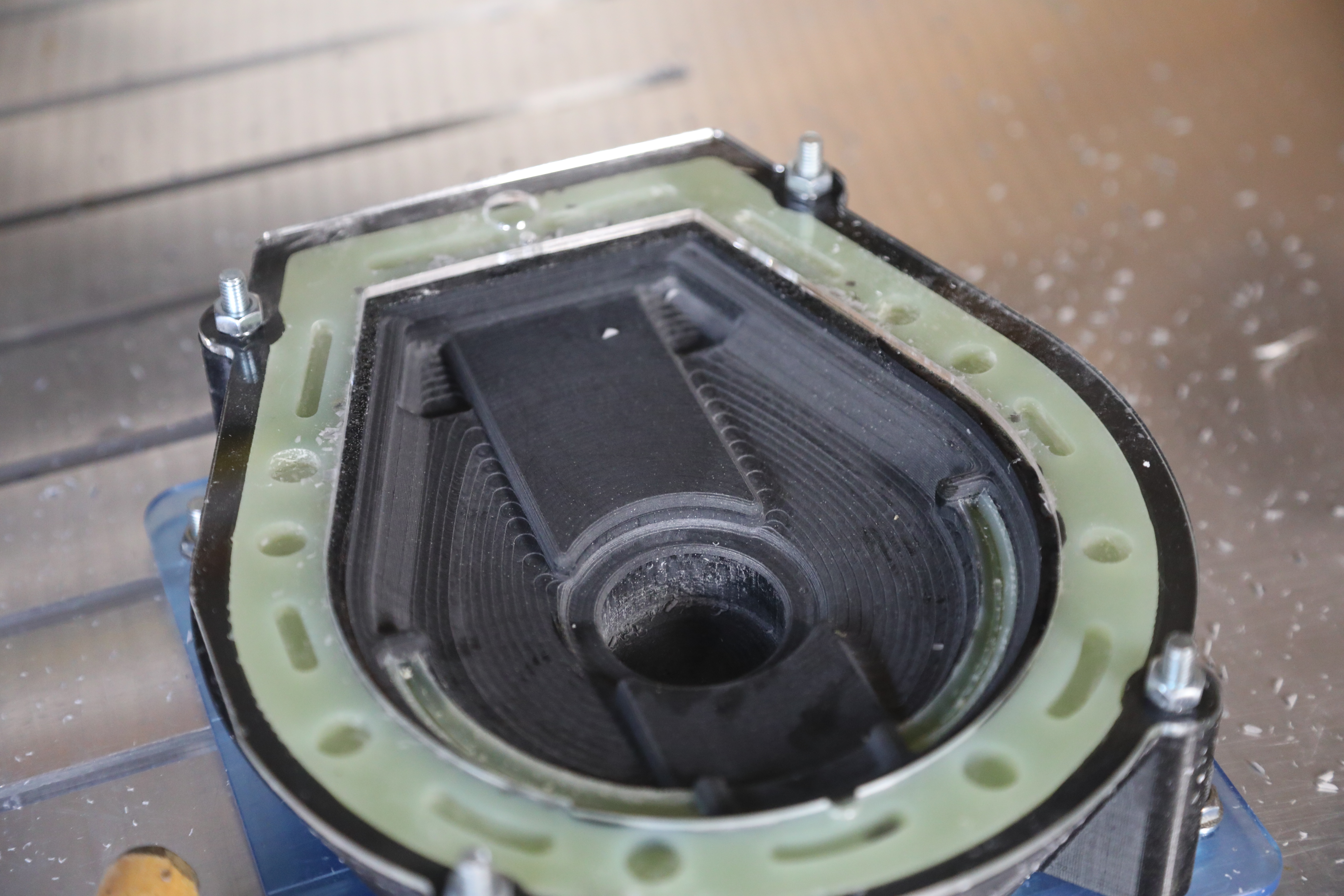 I have a date to go back to work so can spend hobby money again. I started the project designing all the parts so the can be printed on an FDM printer without support and then dump molds made but since then I've got more ambitious in my tiny little workshop. the problem with dump mold is the weight of the final object. I realized as I was designing the mold casing in CAD I could do a dump mold and then go in with the CNC to hollow out the parts accurately. 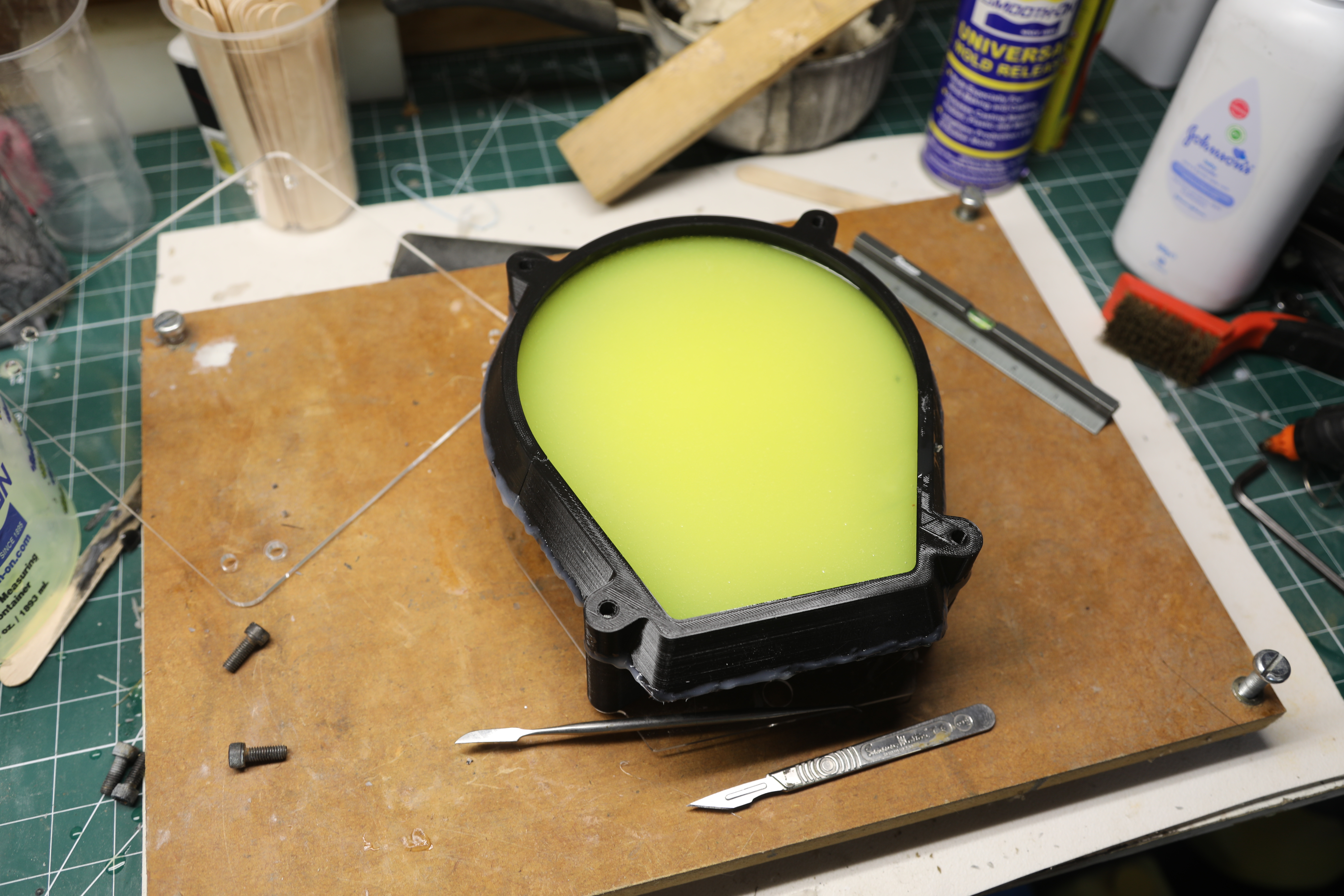 half the wieght down to 125g from the original 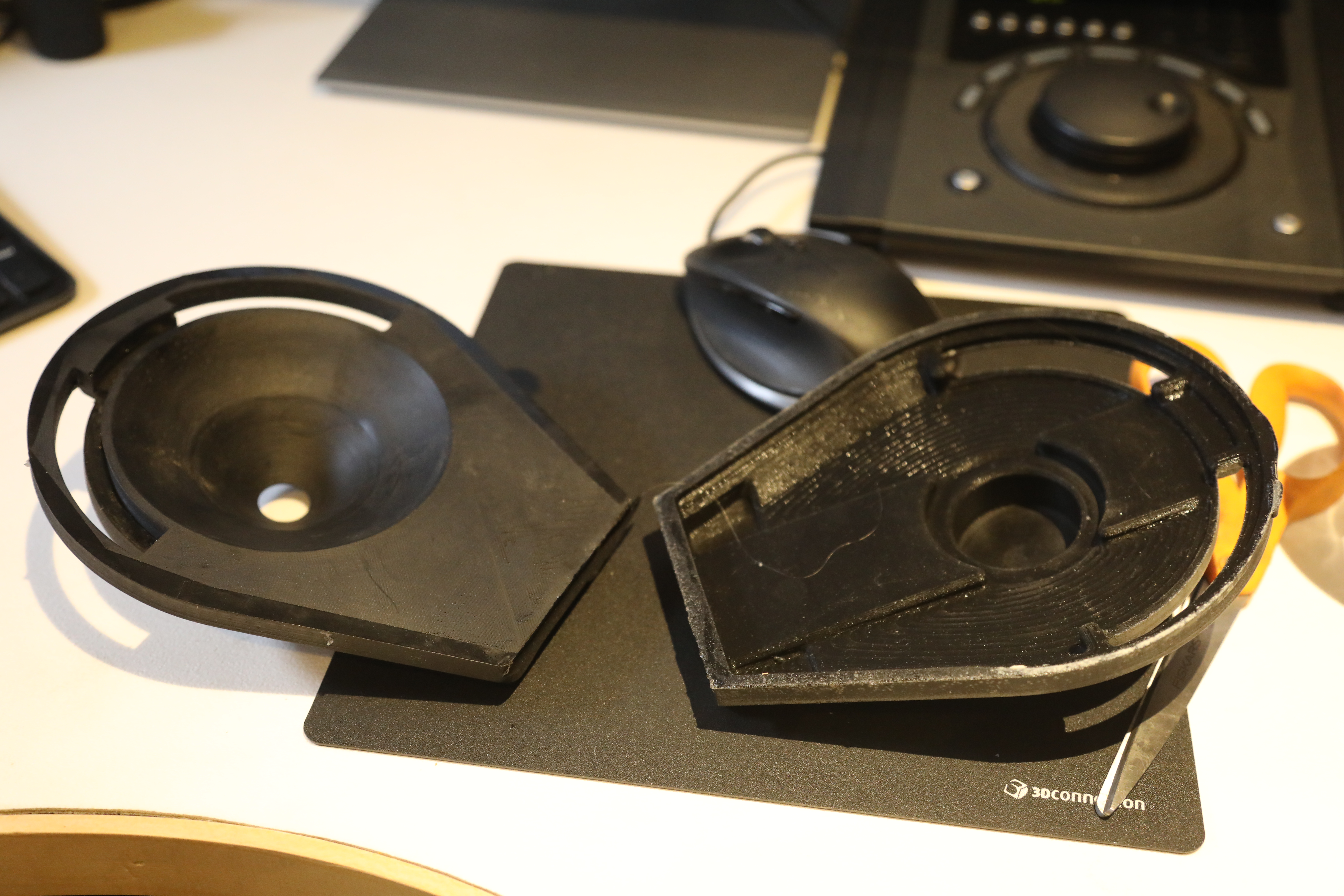 Oh the irony, I now can spend some money the weather is good, my house projects are done (all but 1) but now I'm going back to work so will only have weekends. Ditched the onyx for a smooth cast 320 and Feather lite 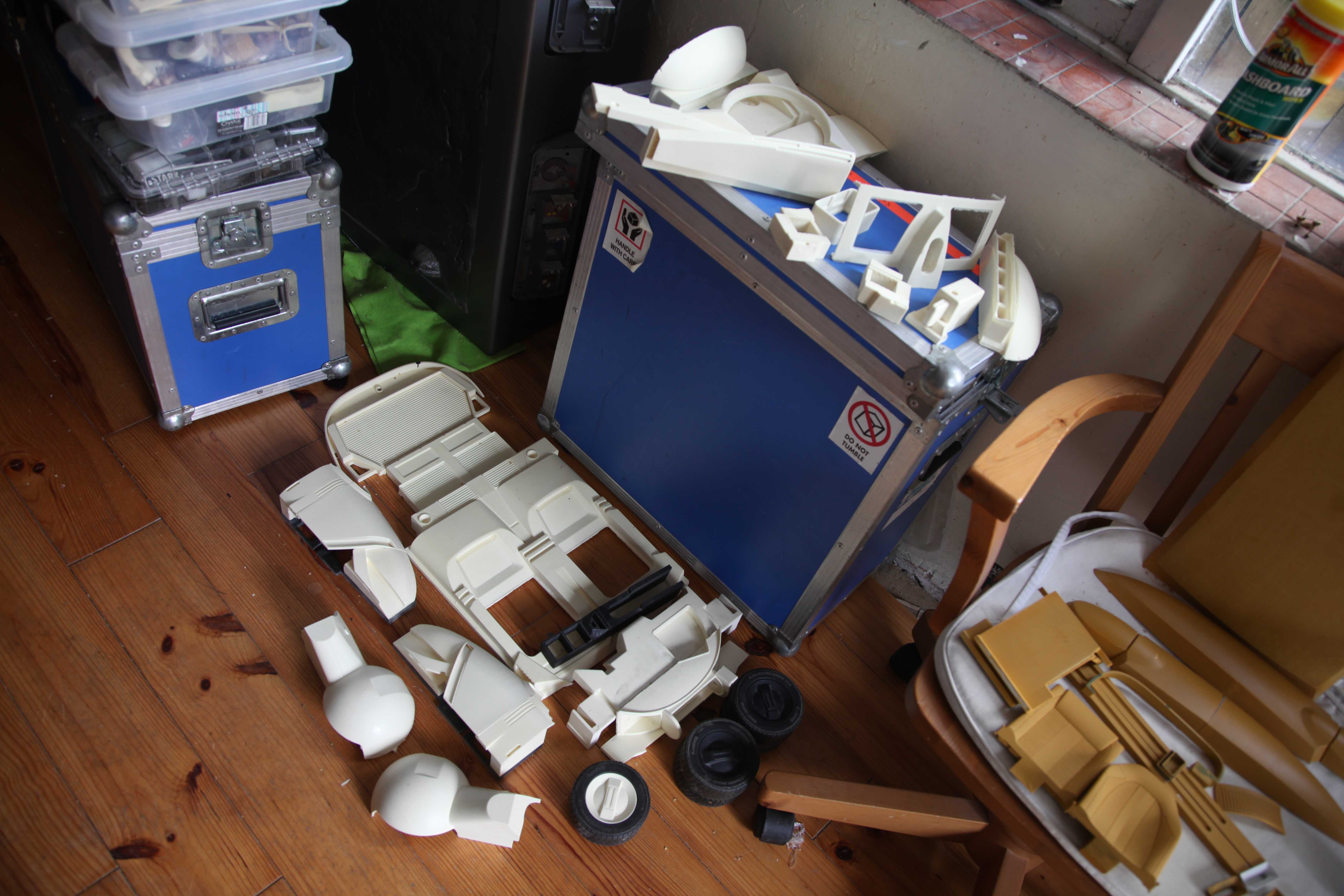 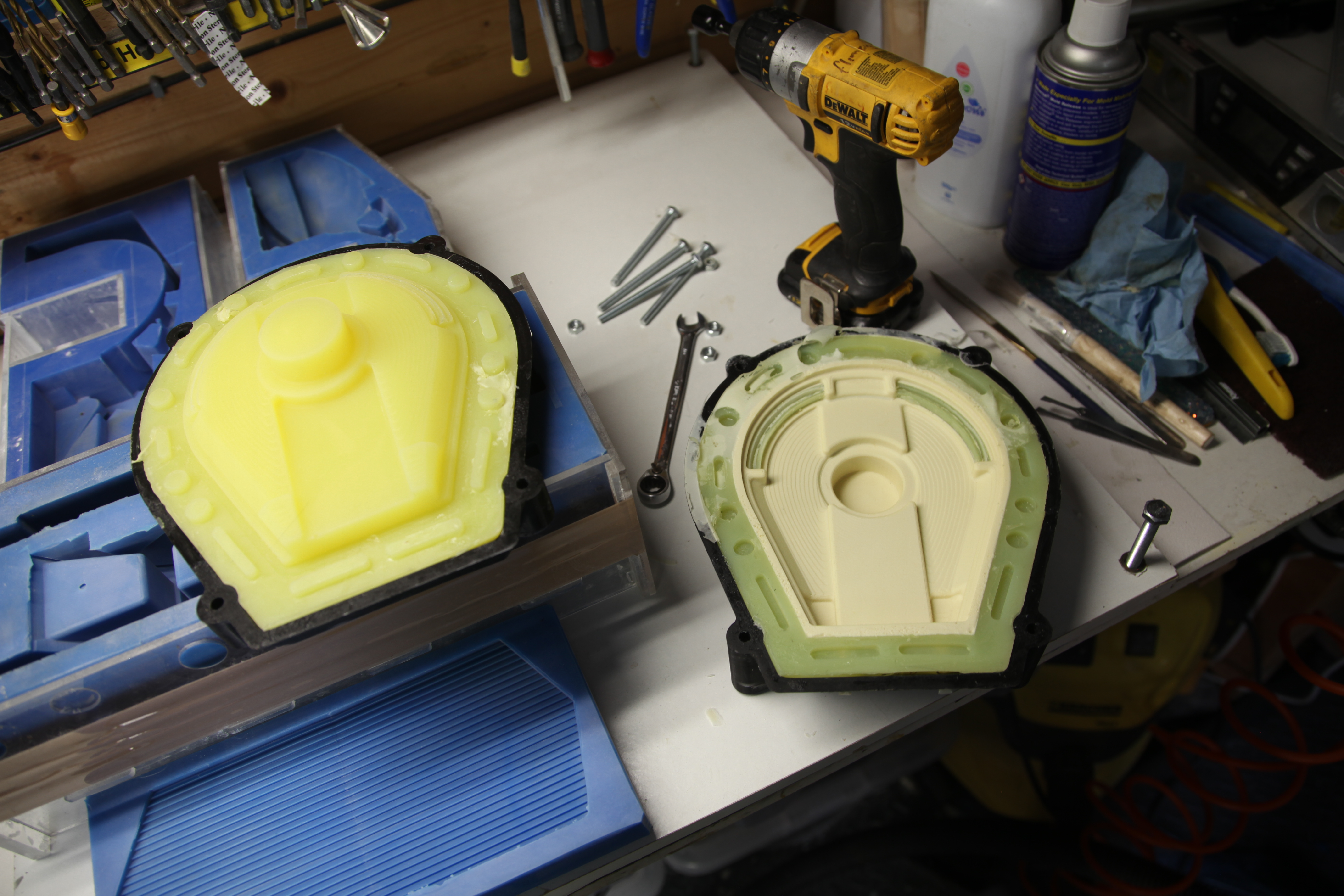 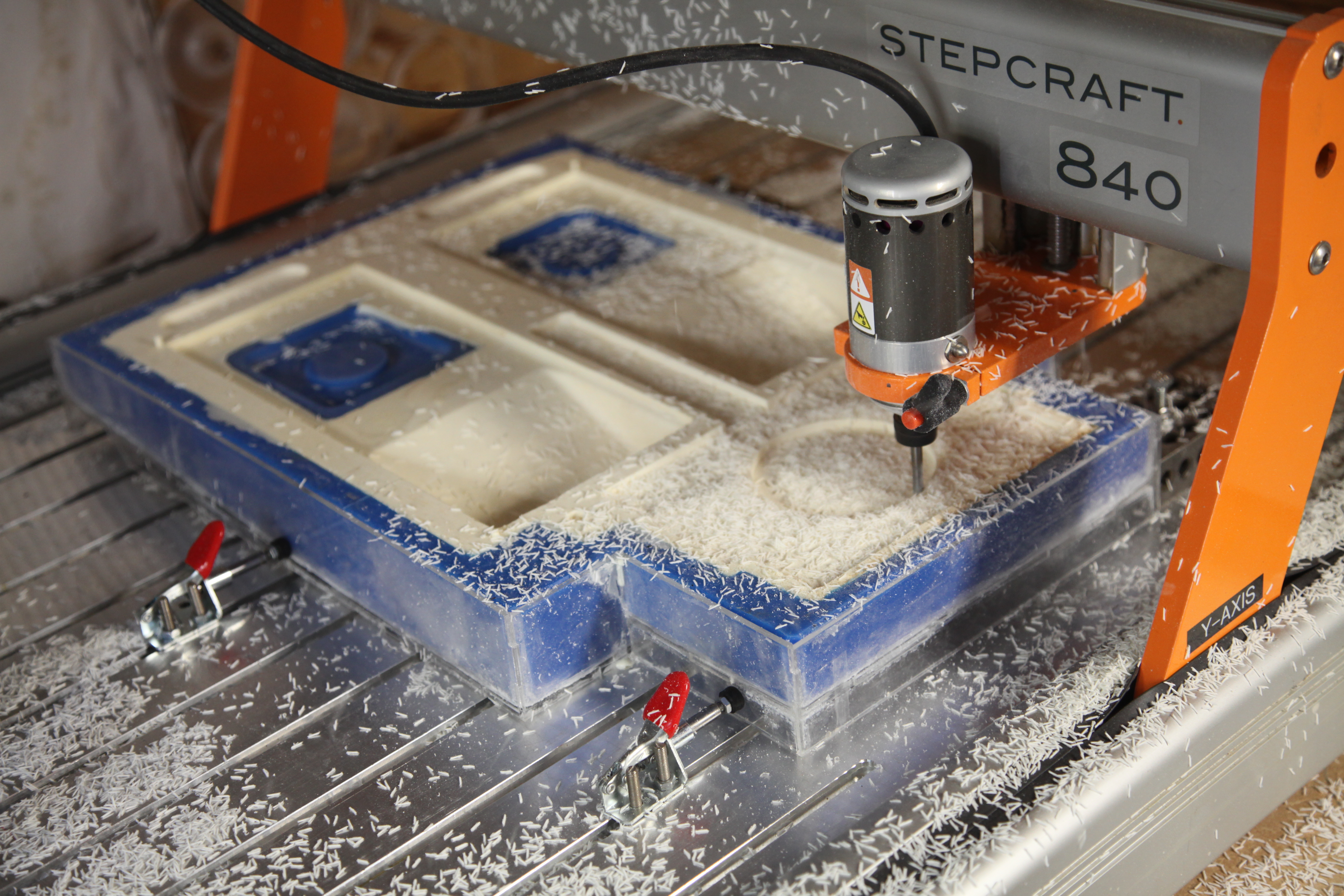 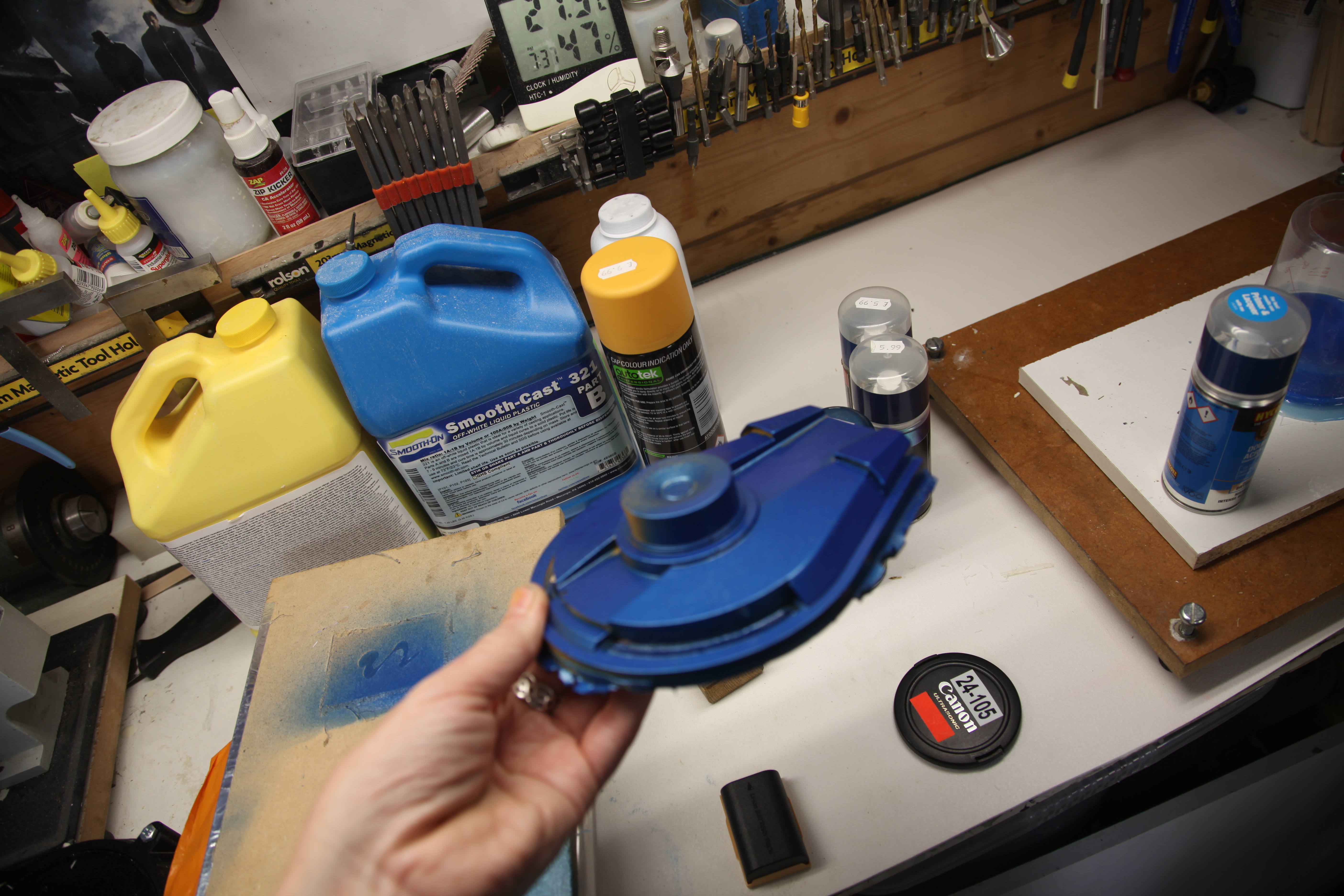 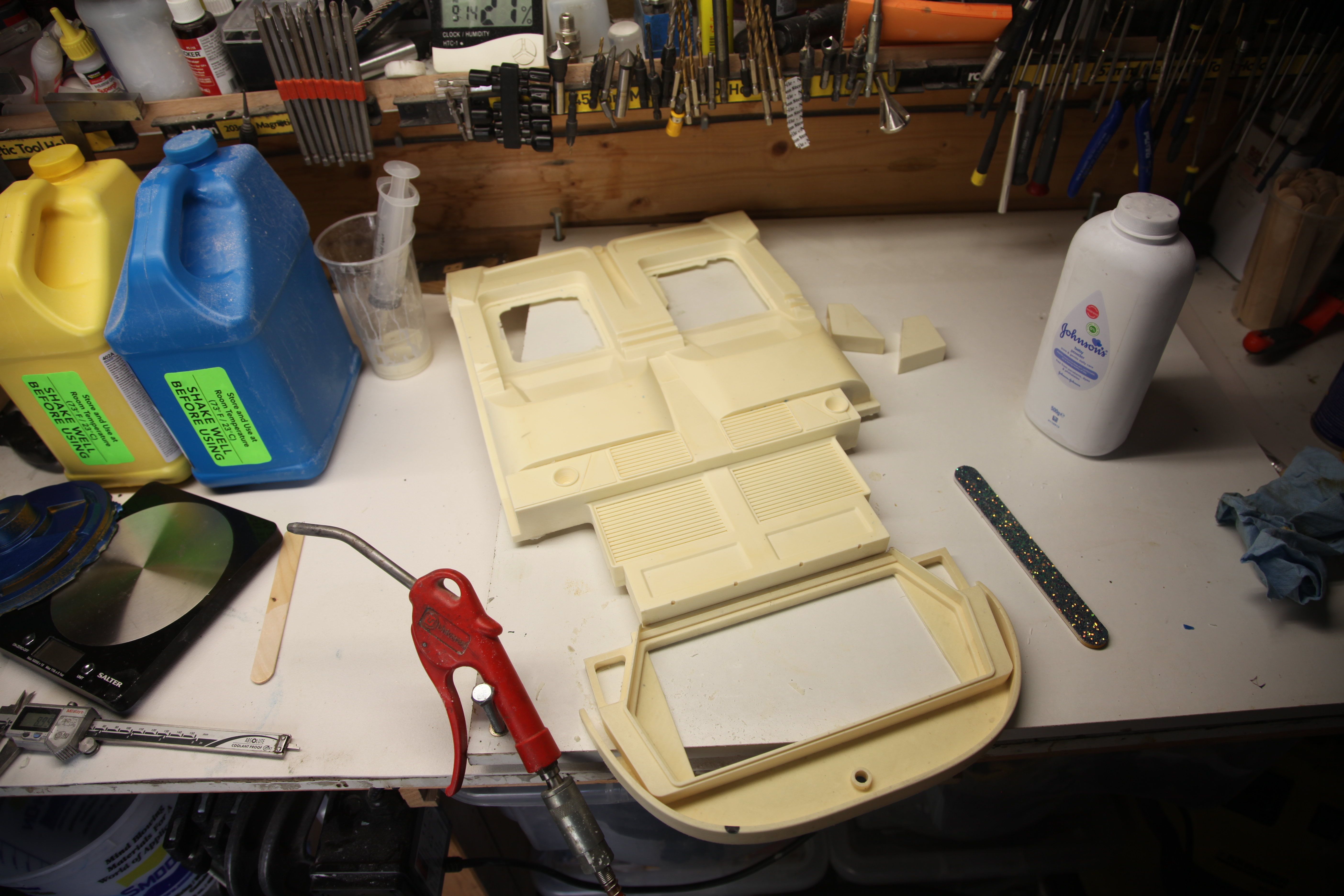 Is this ever going to be available as a kit Flimzy

so glad i re-found this thread... inspiring work!!!

Sorry I've ended up being so busy during covid, Black widow, Dr. Strange, cap Marvel apparently, and some secret stuff. As I've said before this will get finished but in my own time as it's my way to wind down. at the moment it's more about the process than the final thing. I'm sure other people will get there before me but I'm not racing. 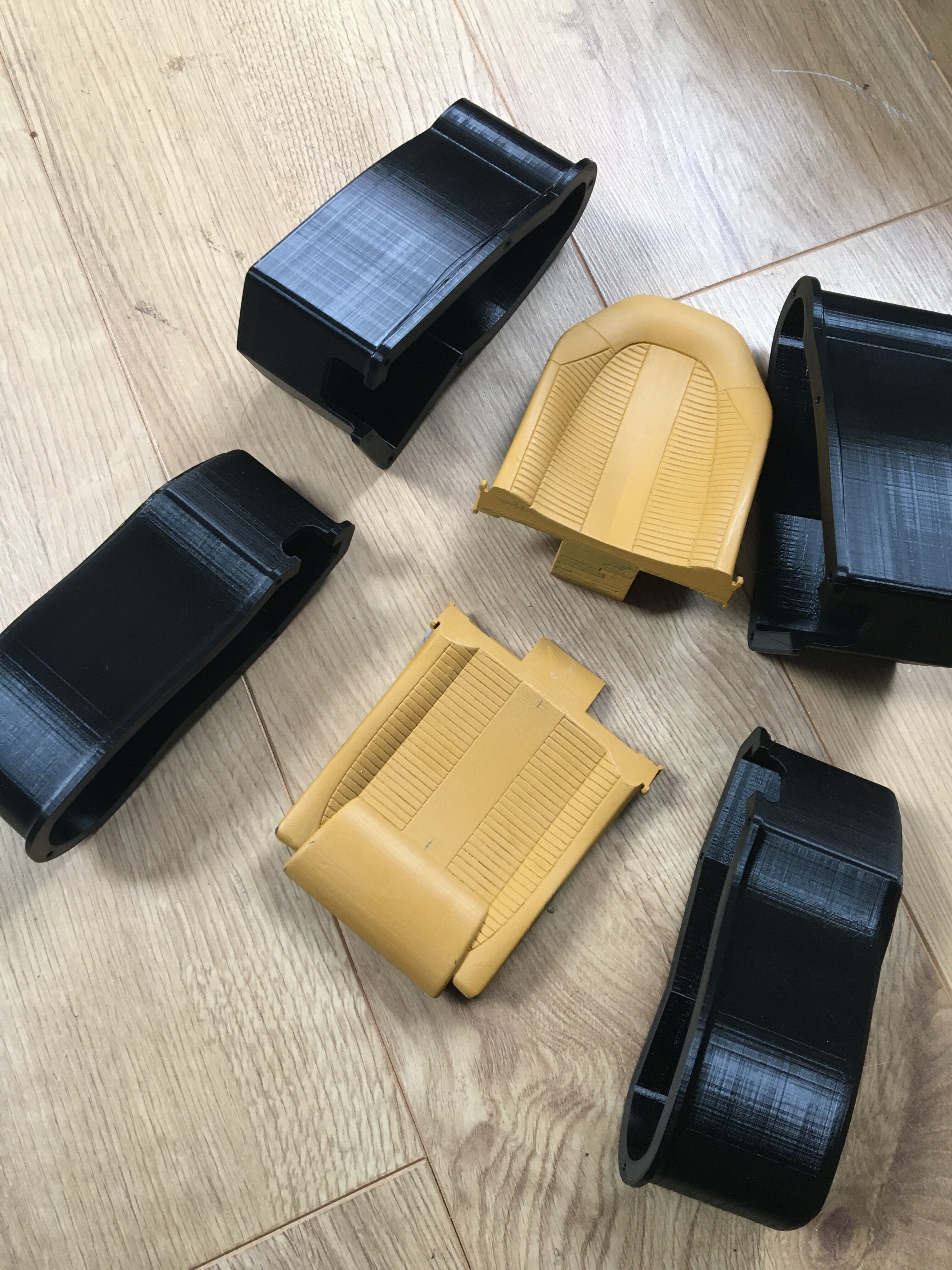 I'm still doing a little at a time.

Very nice work as always, take your time on this as it will be worth the wait..... I have little time for anything new, between the projects on the work table and putting in a new lawn at my new house, I wouldn't have the time. Glad you stayed busy during the past year, stay healthy.....

thankyou everyone for your interest. Yes, it did make me feel bad, so in a way of a teeze 95% of the molding has been done. now its down to the wheel mechanisum before gluing it together. thanks to teslabe's help I will be doing graphics on the small screen but I think the larger screen will need to be a translight. For me having the wheels operate is more important and I need the space. there's still a lot to do. 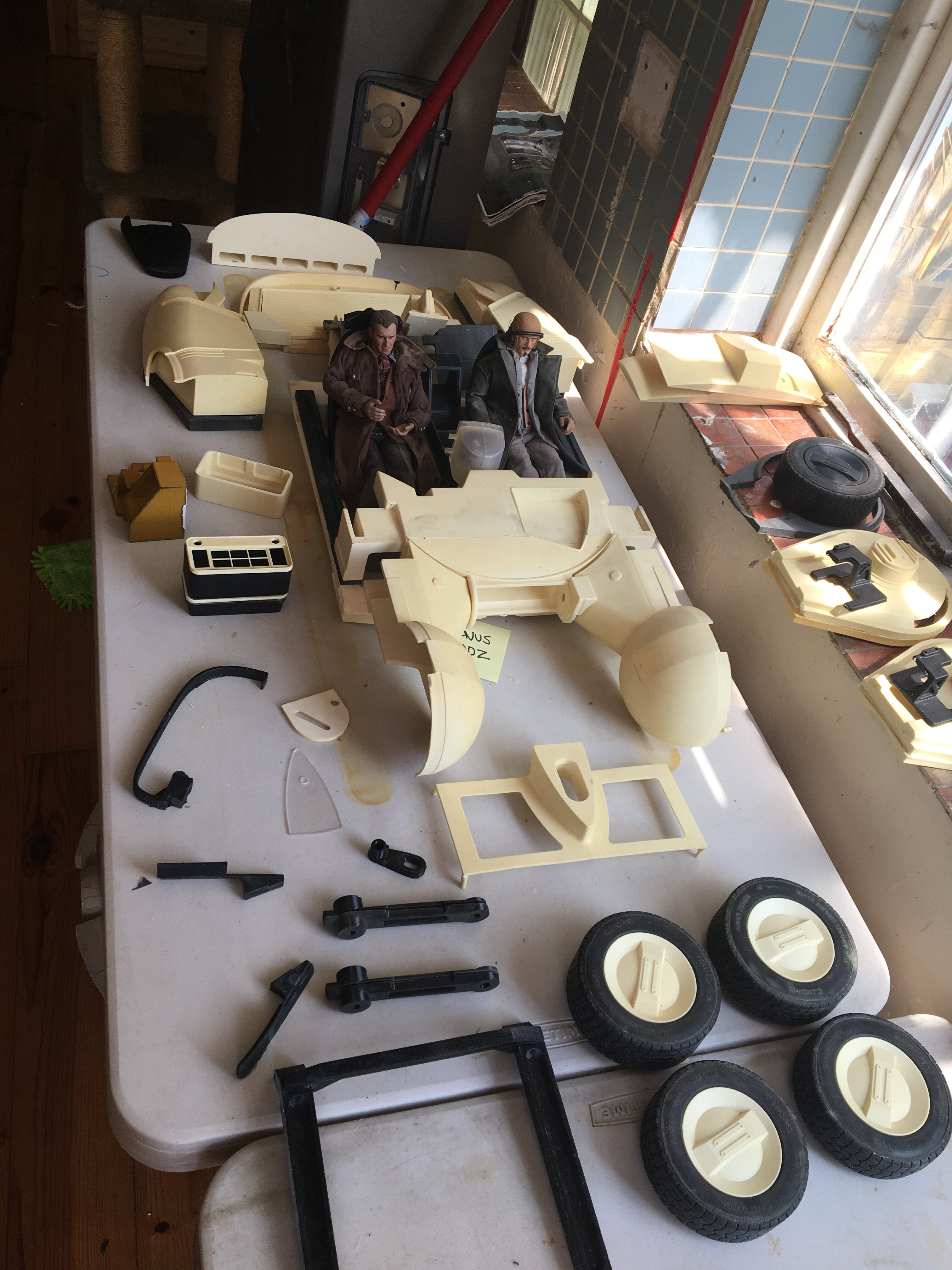