RPF PREMIUM MEMBER
Looks like red locktite to me. Its a translucent paint of some sort. Could be a Loctite but im not sure what thread locker was available in the 60's. Im guessing the red and black paint is a frequency damper of sorts to tailor the frequency response curve of the mic or to lower a resonance peak. Makes sense to dampen that pointy center .

mgoob said:
You’re talking about “thread lock” which is either blue or red, with the color indicating it’s hold strength. The amount of force it will take to break the bonds of the material. Usually used on screws that have a tendscy to loosen under normal use. It’s not usually used as a permanent glue, just to strengthen the fit.
Click to expand...

Nope, I don't believe it's loctite, I know what that looks like, and it's much more opaque than this red.

Could simply be a color code, from manufacturing, telling when it was made, or for what brand or model mic it was to be installed in.

Or maybe it's just glue used to secure the little brand logo that sits on top?

Edit: or heck, what do I know? You could very well be right about the sound dampening theory.
Last edited: Dec 12, 2018

A drop of Tamiya Clear Red might do the job.

That's exactly what I was thinking, Tamiya clear red! That particular color has so many uses!

Seems to be a Ronette of Holland mic used by VM, Silvertone and Philco (possibly others?) Might be called a bullet mkiii?
Click to expand...

Sennheiser uses them, too - I picked one up on Etsy not too long ago.

Hey everyone!
I know I'm a bit late to the game here - I referenced the findings you guys came up with quite heavily in finding a pair of mic elements not too long ago... Thank you all for the research and such!

The two I ended up finding are a VOM and a Sennheiser (the Sennheiser is in much better shape), and I (with the help of a friend who has a copy of Rhino on his computer) modeled the belt disc based off of the dimensions of the mic elements that can be printed on Shapeways. I've got a first iteration on the way, and I'll post pictures of the 3D printed part next to the vintage one, if anyone's interested.

Aside from the textural difference ( 3D printed nickel-plated steel, vs. original stamped aluminum), it's damn-near spot on! I've attached two images comparing the printed one to a vintage Sennheiser mic element. I'm incredibly curious to get everyone's feedback and thoughts.

N.B. - in both images, the reason why the original part looks like it's slightly raised is due to the two solder pins on the back that held the mic wire in place. I'm keeping the Sennheiser "as-is" for reference and measurements.

Reviving an old thread .if possible

Is there a list compiled of all the mics that would have these . Obviously some cases you cant see the condenser and so many old mics around .
Wondering how the telefunken mm65 was found ?

Searching in the uk

Is there a list compiled of all the mics that would have these . Obviously some cases you cant see the condenser and so many old mics around .
Wondering how the telefunken mm65 was found ?

Searching in the uk

I'll go back through the ones I picked up on Etsy (I've seen some of these on eBay as well) - I can tell you that one of mine (the one in the pictures) is from a Sennheiser "bullet" mic... the kind you'd see harmonica players using back in the day. I'll look up the type and post it here.

Hopefully this will help others too

Ive just gone through the thread a listing models that were named .
Lots for sale its wondering whats behind the casing without buying a mic that may be no good


Looking for 2 ideally for my esb chewy bandolier. Currently they are resin 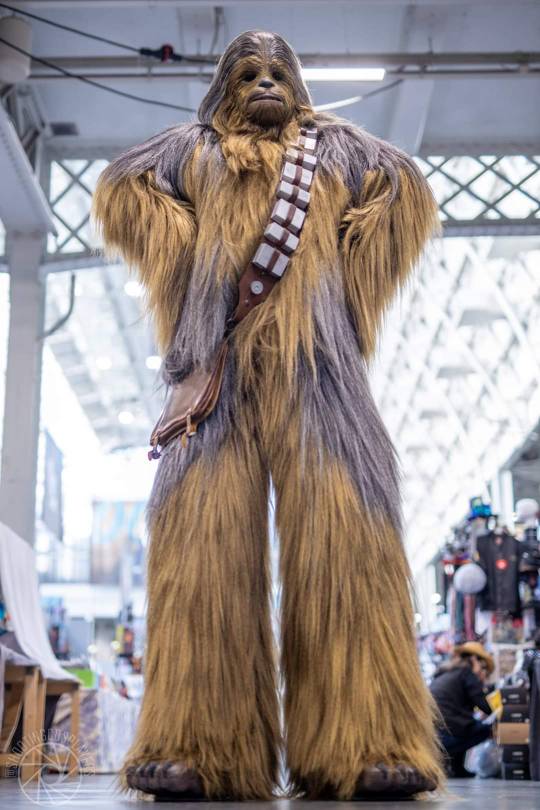 One of reasons for restarting this thread was ive came across lots of these vm mics .
But with the mesh its hard to tell if they are right or not 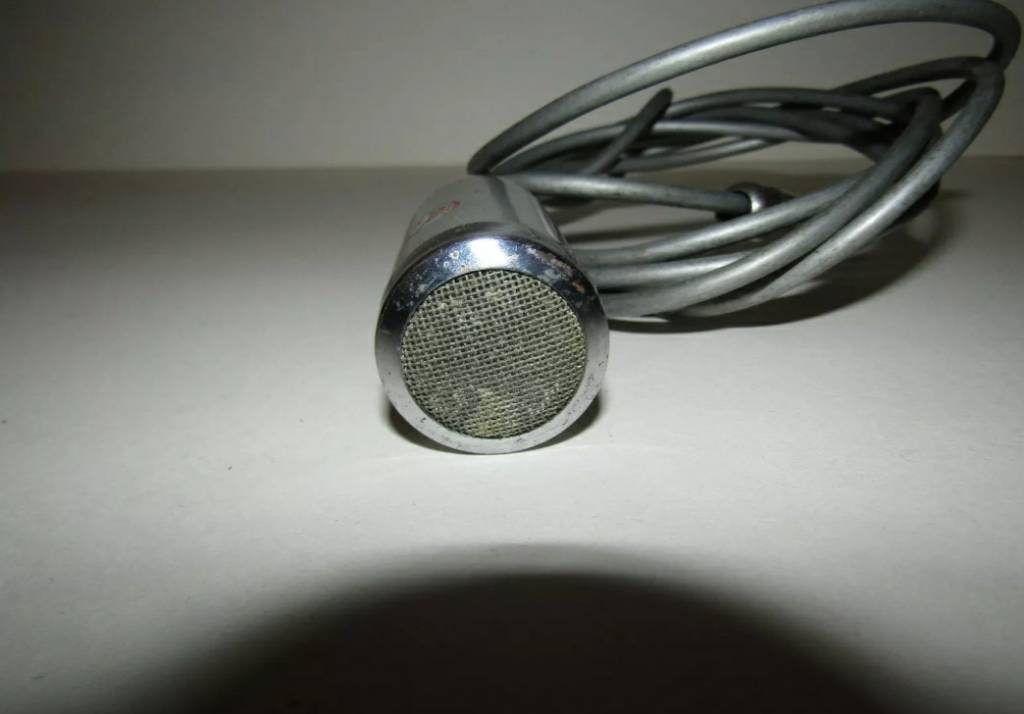 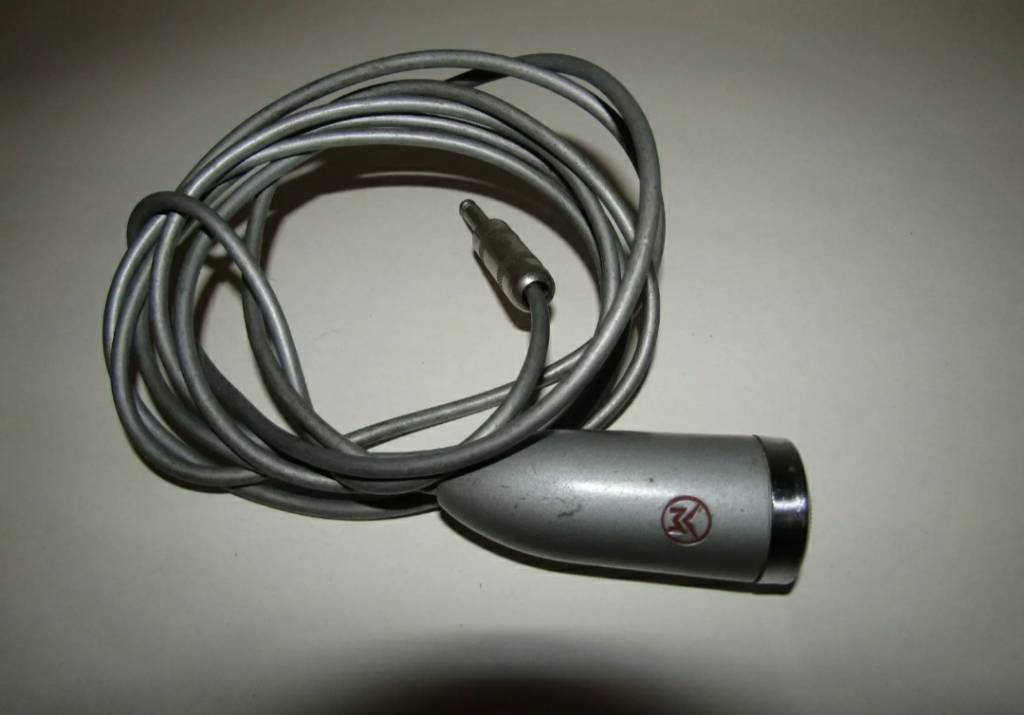 Came across this too showing two different sizes of elements 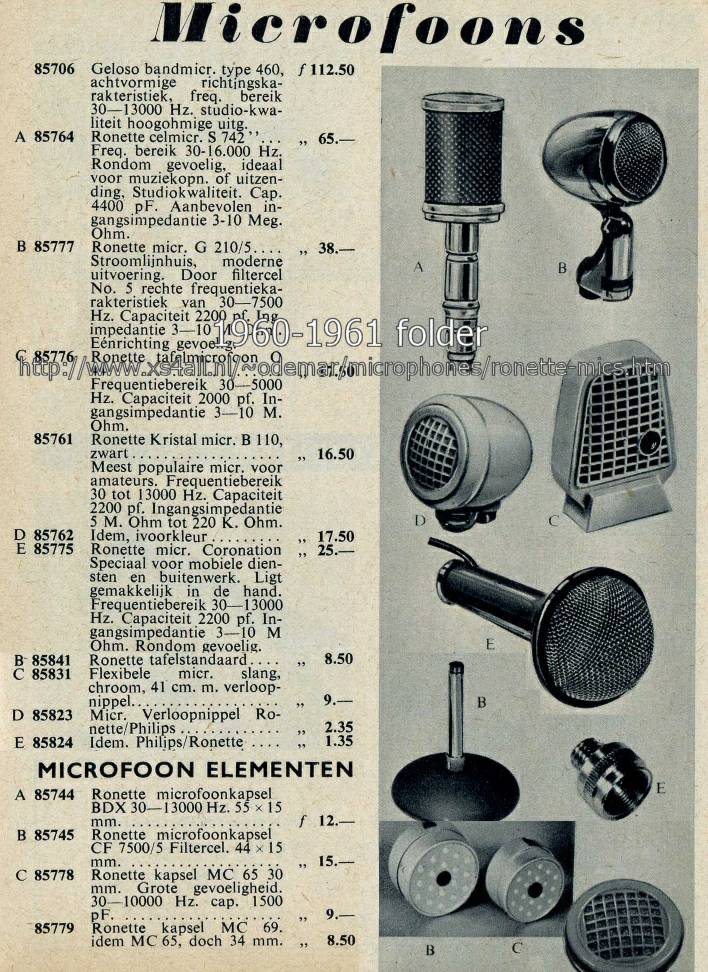 ATAUK said:
Came across this too showing two different sizes of elements

Still struggling to find anything at the moment even the telefunken mm65 is elusive View attachment 1293094
Click to expand...

Going off of my measurements from the VOM and Sennheiser that I have (the VOM is on my homemade ANH belt), the diameter is roughly 30mm (my digital calipers settled around 29.18mm). I'd imagine that the model "C" in the vintage advertisement is the one... if you can find the damn things

Just found this on eBay...

Sorry . Just seen this post for the ebay one
.
Did a lust ever get compiled of all mics that have the right element .?
What models work etc
Lots around just some like the telefunken mm65 are hidden behind the case so there no way of knowing untill open

Sorry . Just seen this post for the ebay one
.
Did a lust ever get compiled of all mics that have the right element .?
What models work etc
Lots around just some like the telefunken mm65 are hidden behind the case so there no way of knowing untill open

RPF PREMIUM MEMBER
After lots of time spent hunting here in the US, I was finally able to snag this funny little Ronette MM.65 microphone that I tracked down over in the UK! Thanks to CWOODREPLICAS for generously offering to assist with the purchase/shipping, as the seller wasn't willing to deal with shipping to the US. The mic housing itself is such a cool shape, I think I may have to use it for a custom hand prop! Perhaps a communicator of sorts? Part of a breathing apparatus maybe? 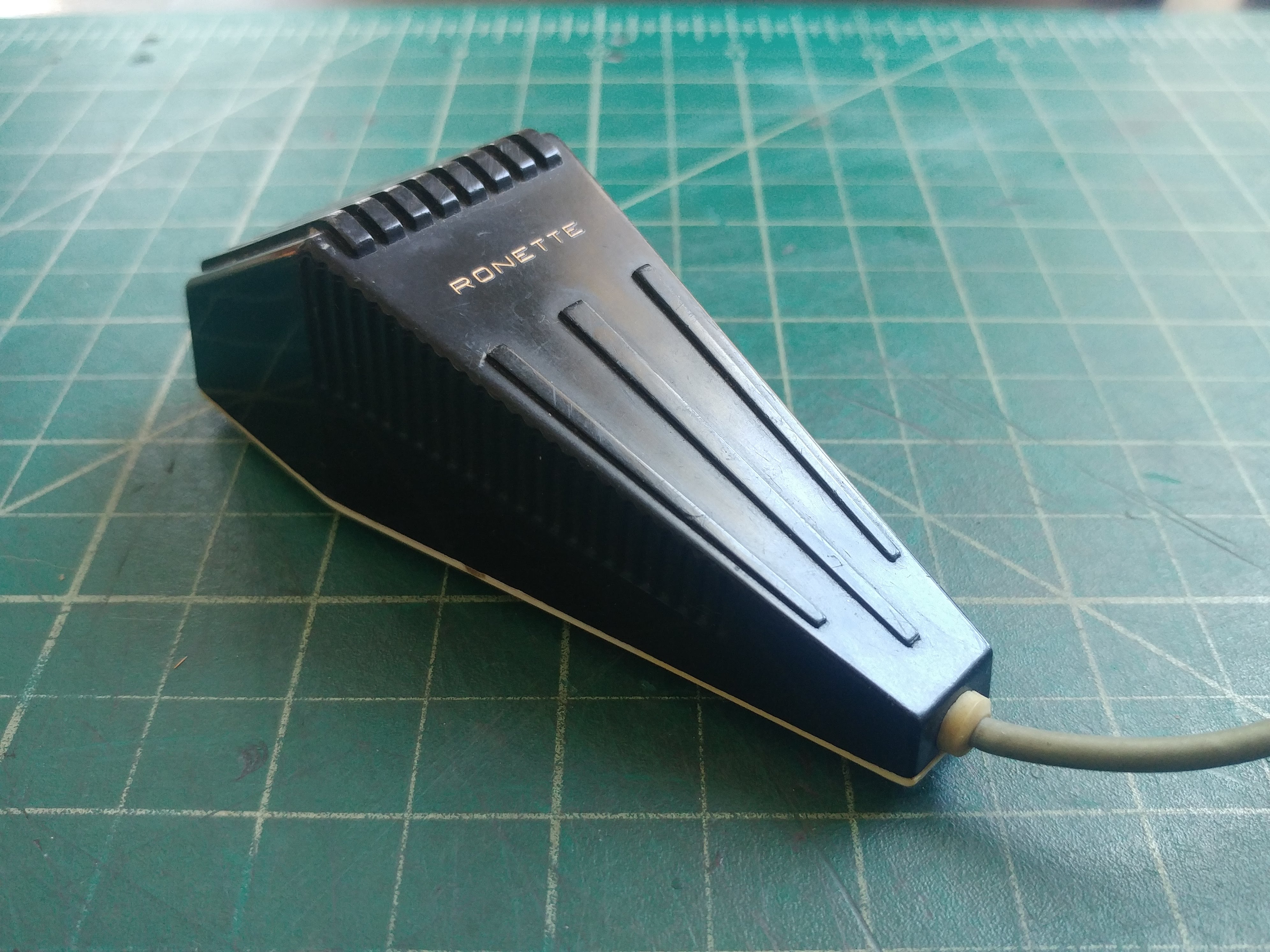 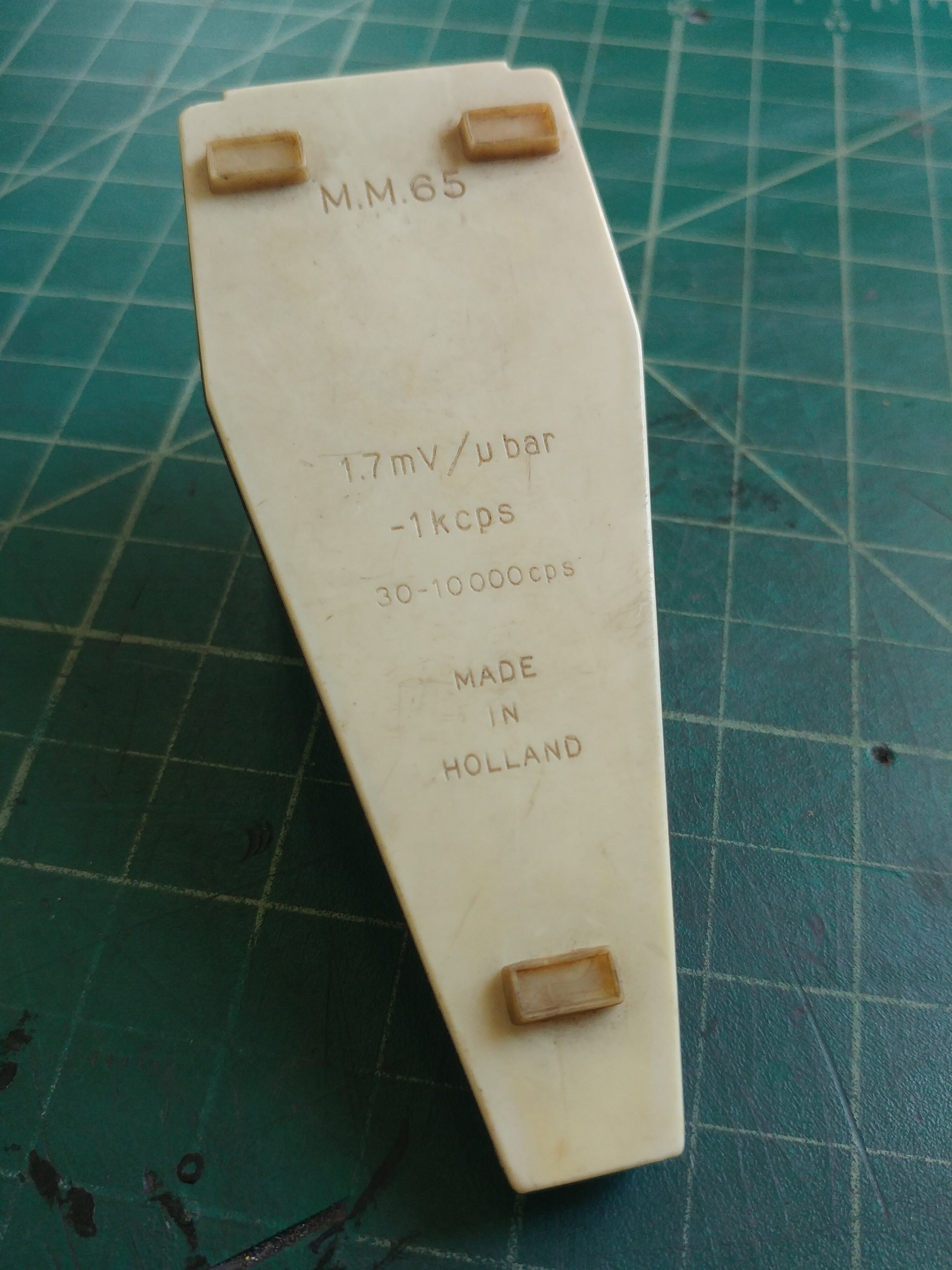 The microphone's housing is basically identical to that of the "Telefunken" MM.65 that phillbarron posted earlier in this thread, save for the branding and a few very small details. It also contains the accurate Ronette harp mic element (this one was the dark-mesh, red-dot variety) but most importantly, it contains the thin metal shroud piece that shields the contacts on the bottom of the mic element. I know that it's not definitive if this piece was used on Han's ANH belt or not, but I'm in the camp that believes it was: 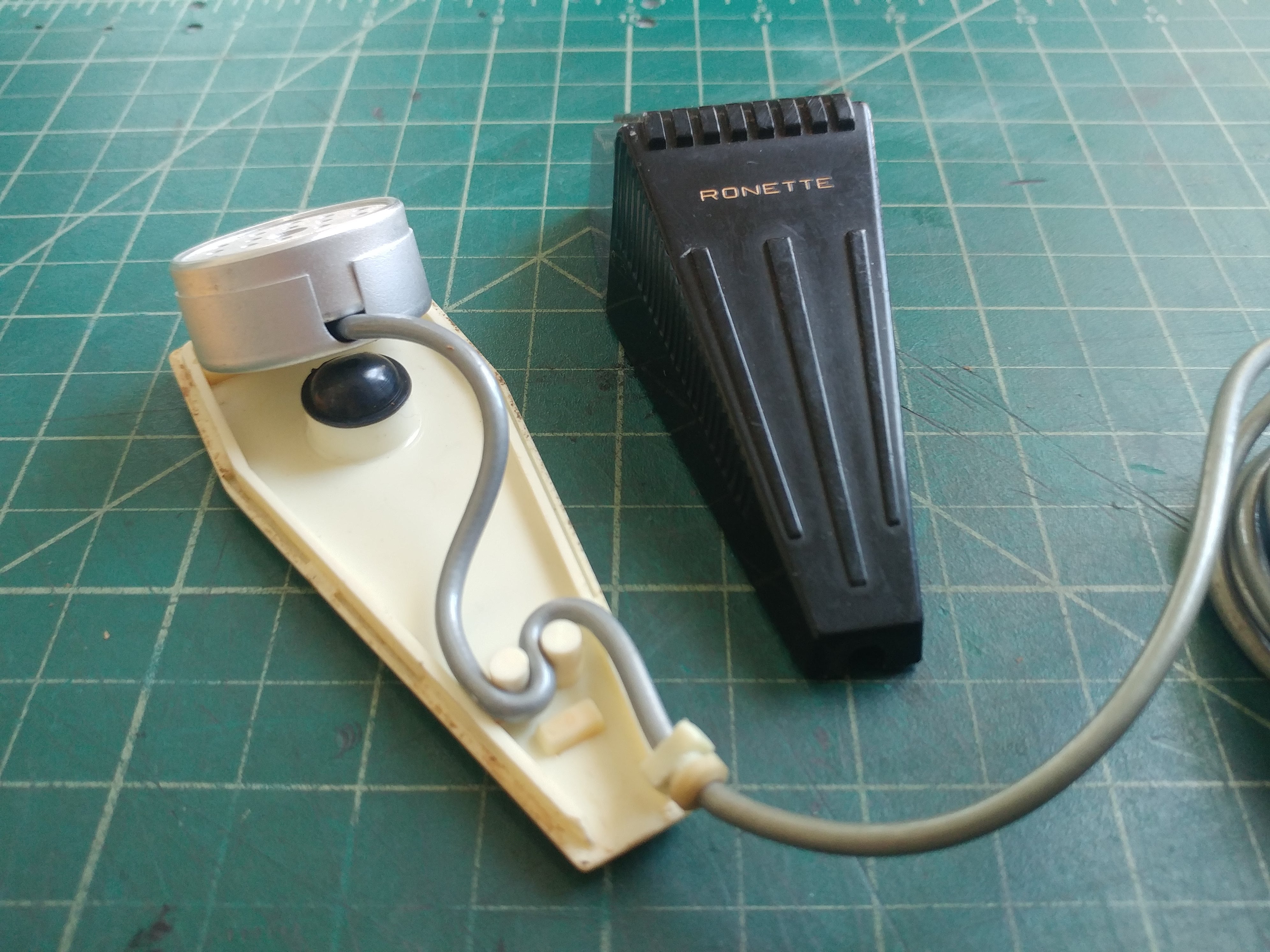 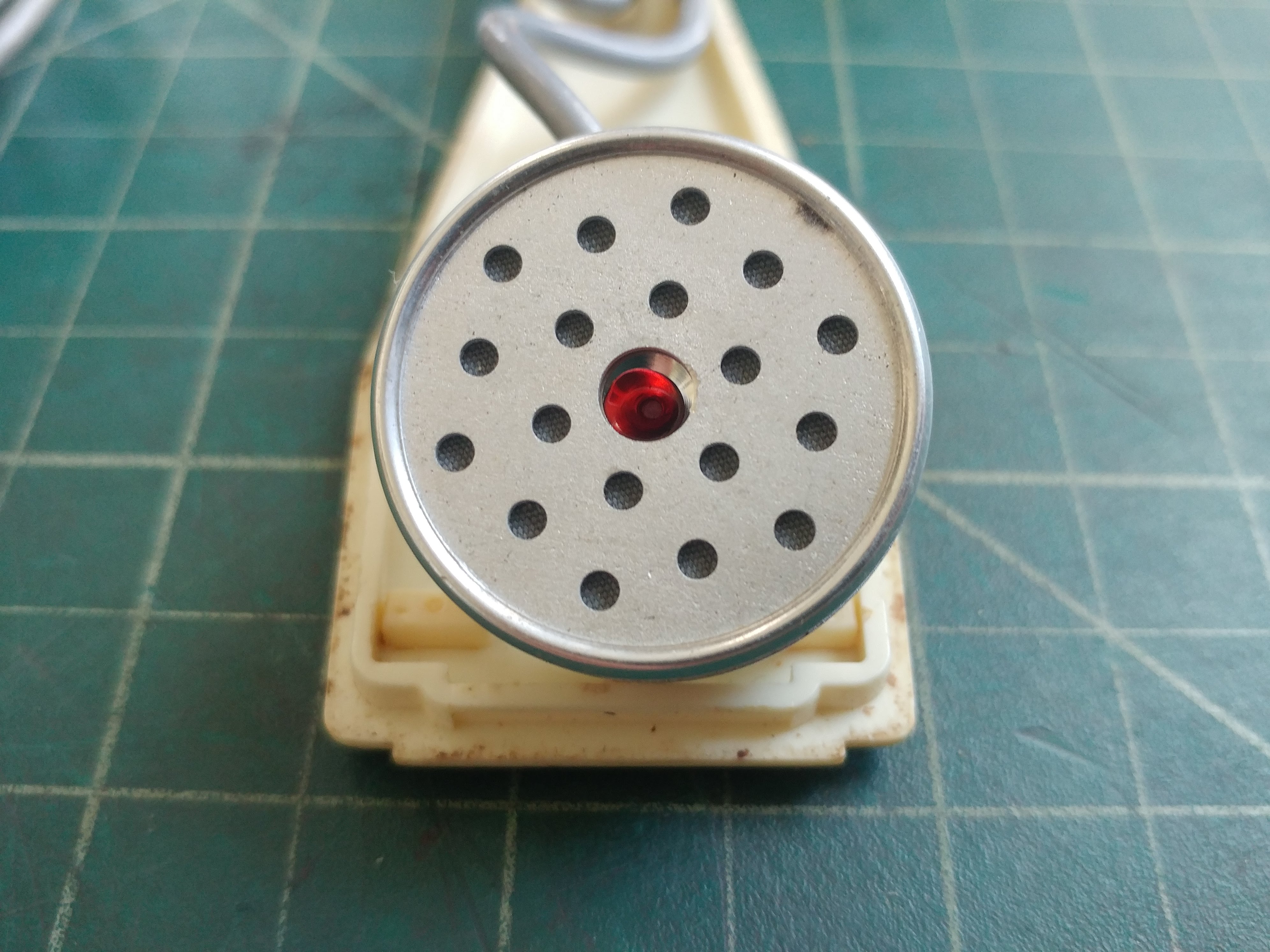 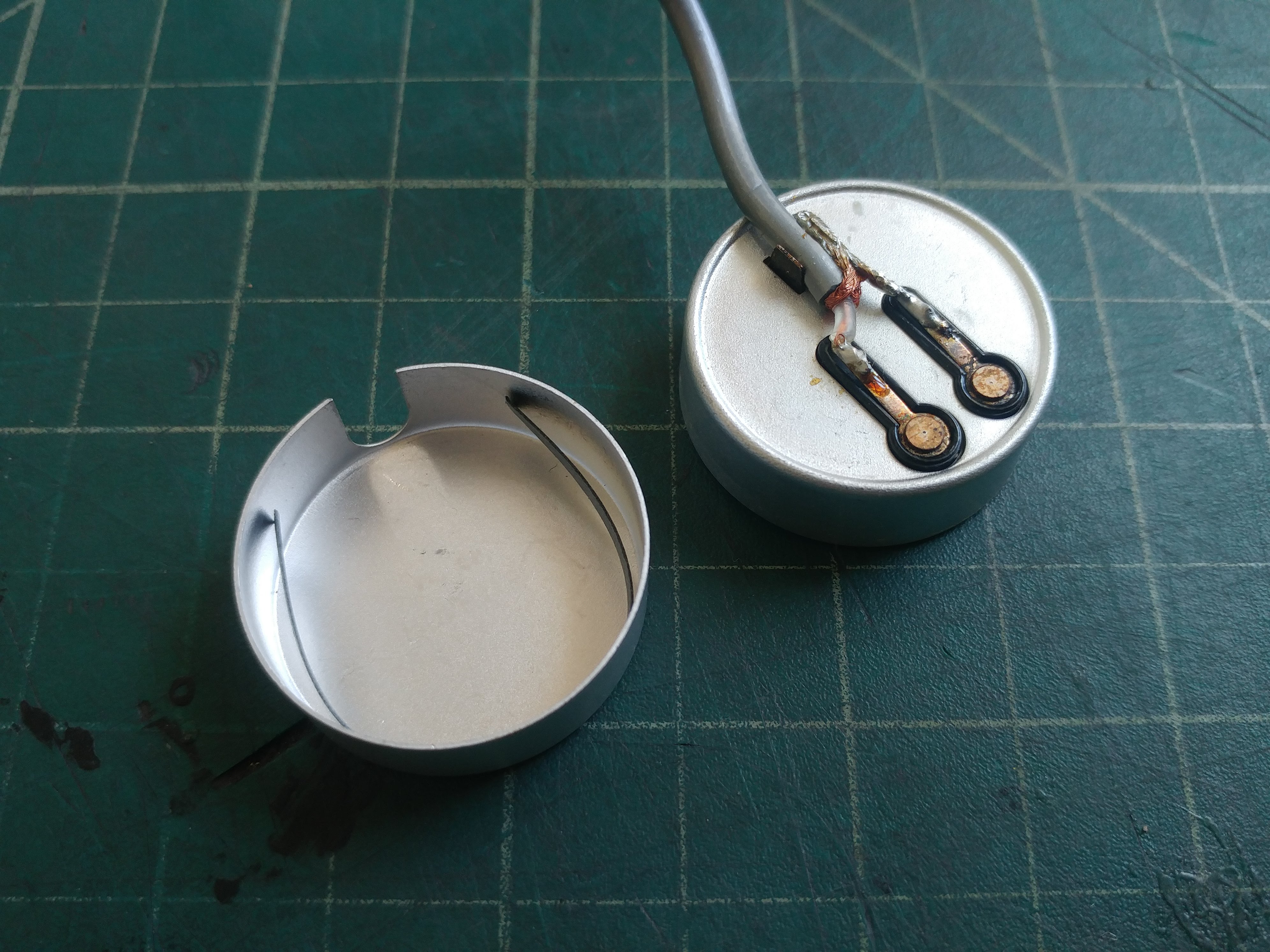 I'm also in the camp that believes the screen-used disc had white mesh and a red center, so I've gone ahead and swapped in a white-mesh disk that I pulled out of a "Voice of Music" bullet mic. The setup on the right is the combo that I'll feature on my (future) ANH holster rig .. at least until further reference surfaces! 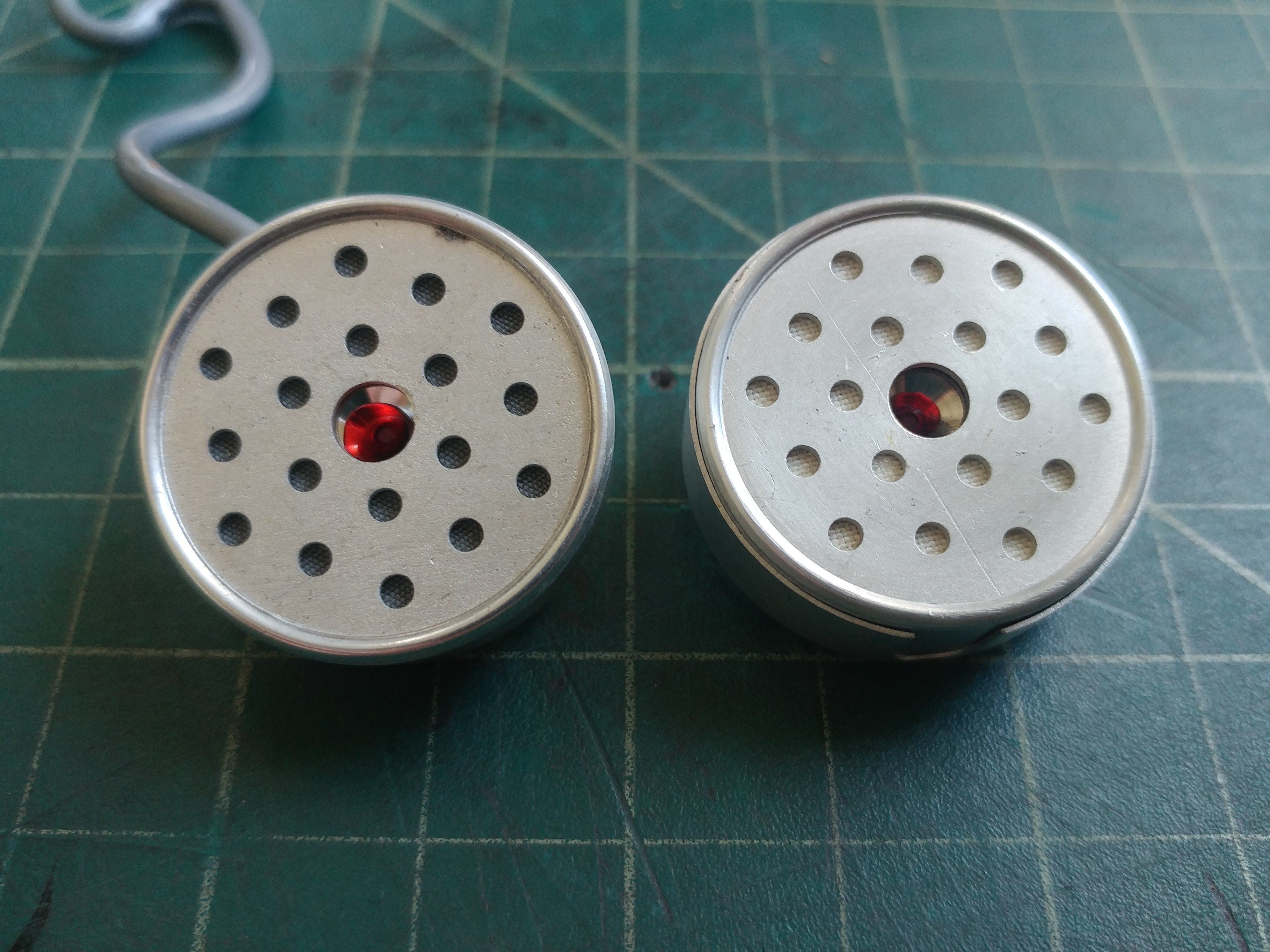 Thanks to those who helped uncover this cool little greeblie here in this thread ... Just a little detail piece, but so cool to finally have the real thing in hand after wondering for many years what it could be!
P

MastahBlastah said:
The mic housing itself is such a cool shape, I think I may have to use it for a custom hand prop! Perhaps a communicator of sorts? Part of a breathing apparatus maybe?
Click to expand...

I used mine as a homemade sonic screwdriver for our Doctor Who inspired Youtube series:

did you (are anyone else) find out if this version has the right element or any other brands/models not already listed?

seems like there were quite a few. Just trying to find one in the uk at a reasonable price

T
What steps did the ANH stunt helmets go through to become ESB?

I need help creating a replica of the Rebel pilot helmet for the X-Wing ship. ANH (1977)