so the arial is now done, and I'm moving down the list
and I remembered this little gem
The Gateway shuttle from Aliens


does anyone know anything about it

it appears to be a jet body with helicopter tails on each side
does anyone have any pictures?

I seem to remember seeing a similar model in an auction catalogue, I'll take a look at my archives and if I find anything I'll post it here.

There should be a photo of it in the animated header bar here:

The light blue ship on the left.
C

It's on display at the Sci-fi museum in Seattle. You can look really close at is through it's glass window.

well, here's what I've figured out so far
does anyone have any other pictures?
Last edited: Oct 20, 2007

Well, looking at the sizes of the Tornado and Huey Cobra tails, I would say the Tornado is probably 72nd scale and the Cobra possibly 32nd.
Revells 32 Huey Cobra has been around for donkeys years (from the 60's IIRC) so I would say thats a good candidate.
Airfix, Esci and Monogram all had Tornados out at this time in 72nd. Matchbox also released a kit of the Tornado F.3 model, but can't be sure of when it was released (I'm pretty sure it would have been around the right timeframe though).
For a Chinook, well could possibly also be a Matchbox kit. They released one around this sorta time (again in 72nd scale).
Only other one I can remember at the moment would be the (really) old Aurora 48ish scale kit ( I would think it unlikely to be this one though).
Shame we haven't got some better pics to go by.

Thanks for those leads Gold Leader

with what you've given me I've been able to figure this much out...
still digging through Tornado kits for the right one though...

more photos from anyone would be much appreciated
Last edited: Nov 2, 2007


thanks so much for identify that

I think the piece stuck on the side is actually the bottom of the Huey or another helicopter, or possibly the bottom fuselage of the Tornado (which actually kinda makes sense)...

Could be A-wing guns on the sides?

on the Huey kit there's a couple of variations

one of them has two side mounted machine guns
I think that those assemblies were actually the kit machine guns mounted on top of the helicopter top rotor...


actually I think I'm heading to the hobby shop tonight to see if I can find any of the kits, and start going through the sprues

I have the ERTL A-wing kit, so I'll see how they compare size wise

I did however realize that both sides are identical on the shuttle
Last edited: Oct 22, 2007

well seeing as pictures are slim, I have to ask, does anyone know what auction catalogue I would want to track down to find a decent version of the one reference picture I have found

Thanks... and more to come

RPF PREMIUM MEMBER
I love that you're tackling this! Really neat design!

well I have the Porshe 956 kit on the way

looks like the front end is used, but the part sticking up in the pack looks to be the radiator

and I bought the huey hog kit, and it looks like a spot on match, the only thing left is to make sure it's the right size, which once I have the porshe kit should be easy enough

did anyone ever remember what auction catalog the image came from? 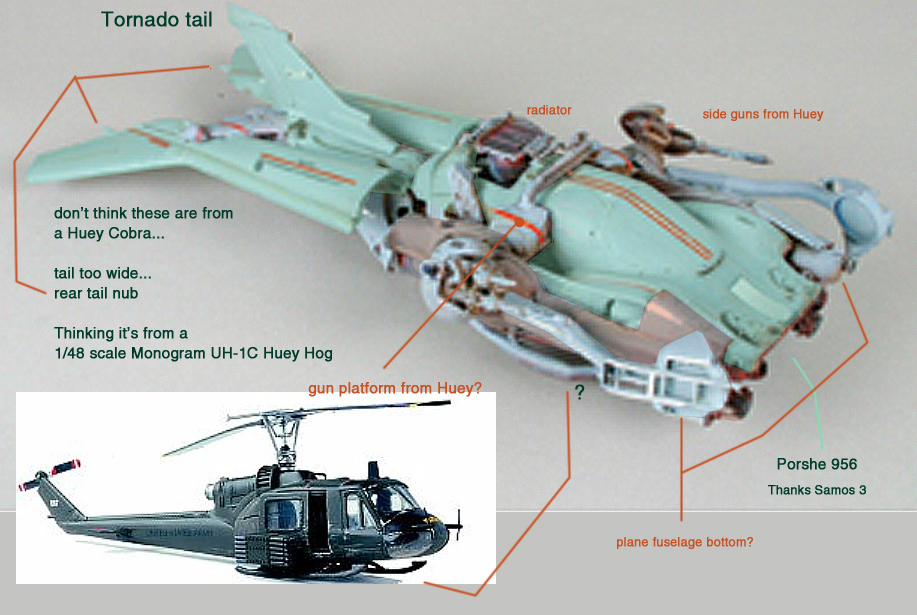 the porcshe arrived, and it's dead on, but the radiator is not what was used on the top... it's some weird shape

the helicopter is probably a 1/32 scale, the 1/48 scale seems smallish

anyways, here's the pics so far, and as before ANY pictures would be much appreciated 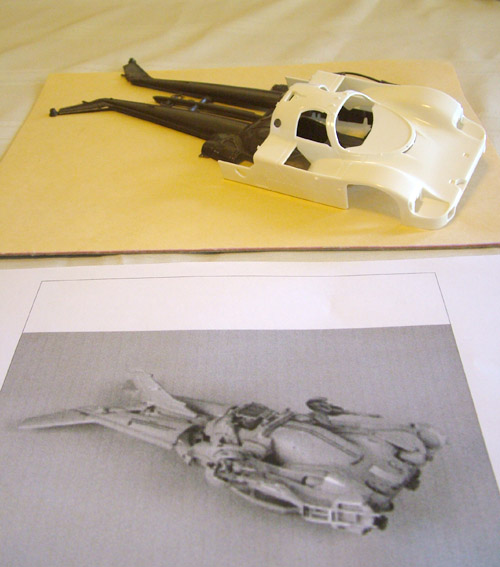 Glad the Porsche worked out. :thumbsup

You might want to check this - I don't know if there was a 1/32nd Huey kit available then. There was a 1/24th scale Huey kit (also Monogram) that goes back that far (CE3K used it pretty much out of the box).

This might be old news, but there are two dental mirrors build in too:

GKvfx said:
You might want to check this - I don't know if there was a 1/32nd Huey kit available then. There was a 1/24th scale Huey kit (also Monogram) that goes back that far (CE3K used it pretty much out of the box).