Short background: I'd built a few Star Trek ships in the 1990s, but didn't really get into modelling in a big way. After about a 15-year hiatus, I got into modelling in a very big way in 2015 and I've kept going since. I've got a Models Hub on my blog (which is actually predominantly about my paintings), if anyone's interested.

While I appreciate building a model to specs based on the "intent" of the kit (i.e. building a Millennium Falcon (either simply OOB or super-detailed) rather than this weird Factory Stock thing I did)...

most of the time I see a kit's box or an unboxing video and think "That's a great kit...what can I turn it into?" –like this A-Wing Roadster:

After seeing this illustration of a four-legged Scout Walker:

and this Joe Johnston drawing of a "Mark VI":

I thought it'd be fun to take this Bandai AT-ST kit and bash it into something of a cross between the two.

Since I had other plans for the legs, all I would need from this kit is the head...

Those legs would be supplied by a couple of these Gundam kits:

The body got beefed-up and enhanced with some parts from a variety of kits (I've bought a few airplane and tank kits over the years specifically as donor kits for kitbashing):

I figure that Gundam part on the "ear" (identical on the other side) would be some kind of advanced sensor-thing. The "nose" is from a pick-up truck, I think. I discovered I had a part from a car kit that would fit perfectly in front as a single rectangular,"squinty" view port only after I had already glued the covers in place, so I popped 'em out. Then I cut some styrene to cover the double windows and tried to fill-in as much as possible, to allow a smooth(-ish) fit for my car part:

I cut some carbon fibre rod and used that to attach the Gundam legs to the AT-ST body near the back via a hole I drilled. Looking at the Gundam box art doesn't quite make it obvious how these weird legs work, but I got the idea while looking at a build video of that kit (unfortunately, my idea would require two kits, but the result was just as I'd imagined). The first test-fit looked pretty good...

...but those spindly legs don't look too sturdy...

...so I added a few more parts from a completely different Gundam kit (note the carbon fibre rod connecting the legs):

I briefly toyed with the idea of building an anti-aircraft gun to go on top (and had two versions standing by) until I decided to beef up the guns on the right side and chin instead.

That's a 3D-printed R2-unit I bought off Shapeways that I'm (still!) having a difficult time painting.
And those guns are Death Star lasers from the A-Wing kit I used to make that roadster.

Those spindly legs were still bothering me, though, so I looked in all my parts boxes for ideas and came up with the notion of adding heavy armour on the outsides of the legs...
Last edited: Jun 2, 2020

I decided that some extra Gundam parts would add the necessary bulk, strength, and weirdness for my armour. I motivated the paint scheme (and all that fun chipping!) with the idea that, while the sleeker, four-legged walker was a prototype, the armour was even more experimental and this whole project was some kind of field test to see if the armour could sufficiently protect those legs (and also the guns on each side of the head). I used a file to make damage marks on the head and armour which will show up once the paint goes on.

Before and after chipping:

This colour combo has a bit of a CN Rail feel that I quite like.

I used black primer then sealed that with a clear gloss coat, then a coat of hairspray, then a covering of white, then orange stripes (simply masked off with tape). I chipped the orange and white simultaneously (rather than one before the other), but I did it carefully. Then I dry brushed some silver on the edges to "reveal" the base "metal."

Here's all the leg armour with all the guns:

For the mud I used some chalk pastels I'd ground into powder and applied it with a small paint brush by dropping it onto the parts and fixing it with odourless thinner. I also mixed some chalk into the thinner and piled it on for an extra muddy effect.
Last edited: Jun 3, 2020

I wanted to paint this in several layers of colours as though the field tests took place in a variety of settings (forest, urban, etc.) and I started with a coat of black primer which I covered with a gloss clear coat:

I did the same with the legs and then, after applying a coat of hairspray, I gave it a nice army green coat all over...then chipped like crazy!

This was looking good, but I wanted something blue in the end, so I gave this stage a coat of hairspray and then applied a coat of sand grey which was then covered with a custom blue I mixed by eye...then chipped like crazy!

All four legs got some styrene added in these spots (paint scraped off for better adhesion) to enable me to attach the armour later on:

I detailed everywhere I could get access to, even though part of the legs would be obscured by the armour (I didn't want to be left with any naked bits after attaching it).

Here's the head/body assembly with the finished guns:

I need to take some pics of the completed model and I'll post those soon.

The antenna is inspired by the ones on the probe droid –clearly, they're very robust to take this kind of beating and be only just banged up a bit.
(in actuality, it's a bit of lead wire with a bit of styrene from some kit attached to the tip)

And the name is taken directly from the little blue droid that lived inside the chest cavity of Bollux (another droid) from the Brian Daley Han Solo novels. Why the Empire would call it that, besides the colour, is up to you. 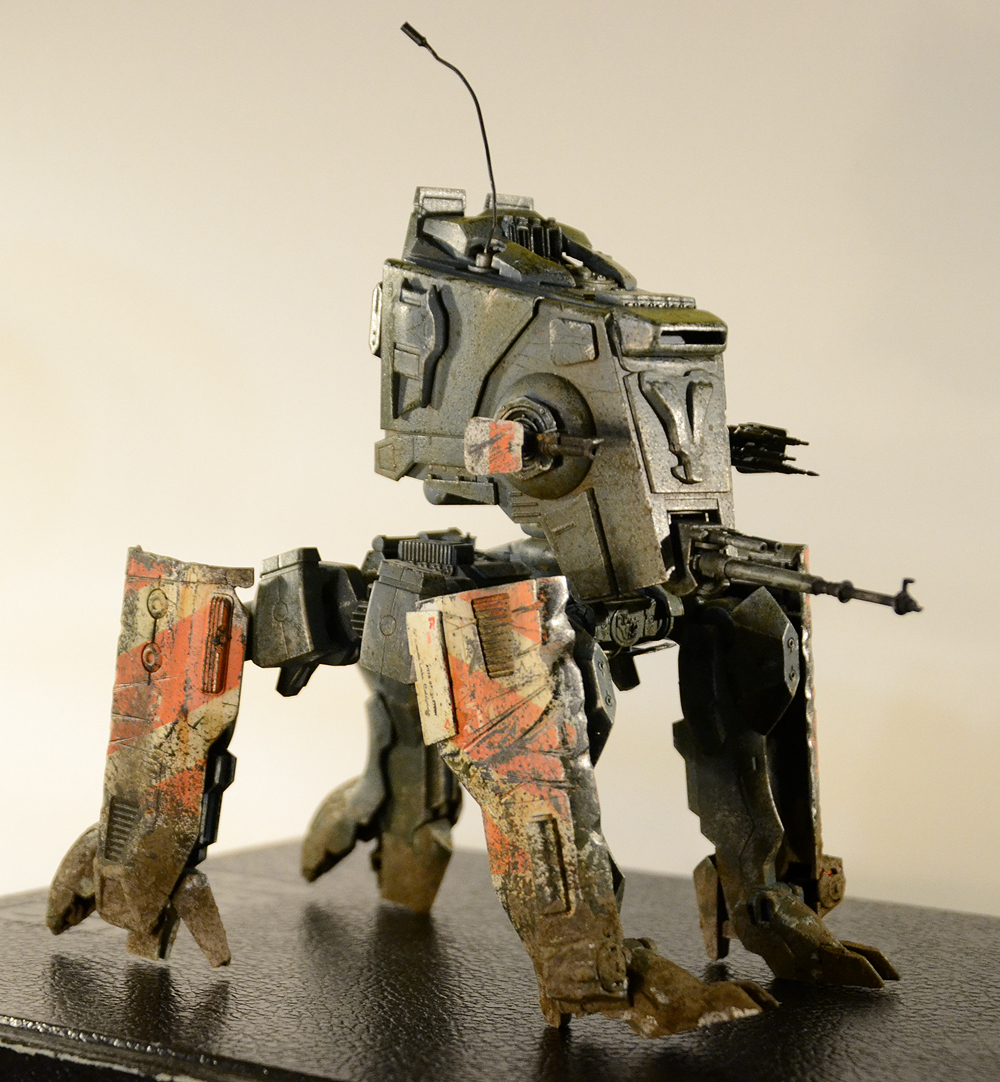 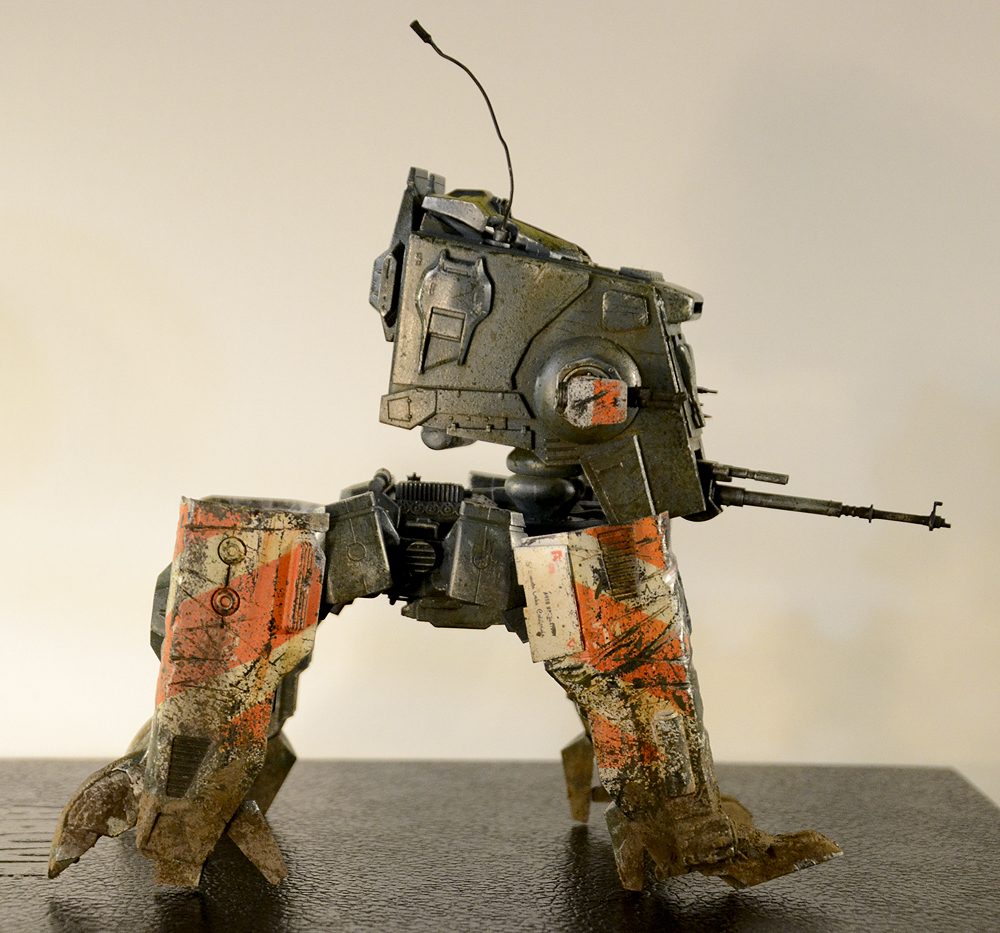 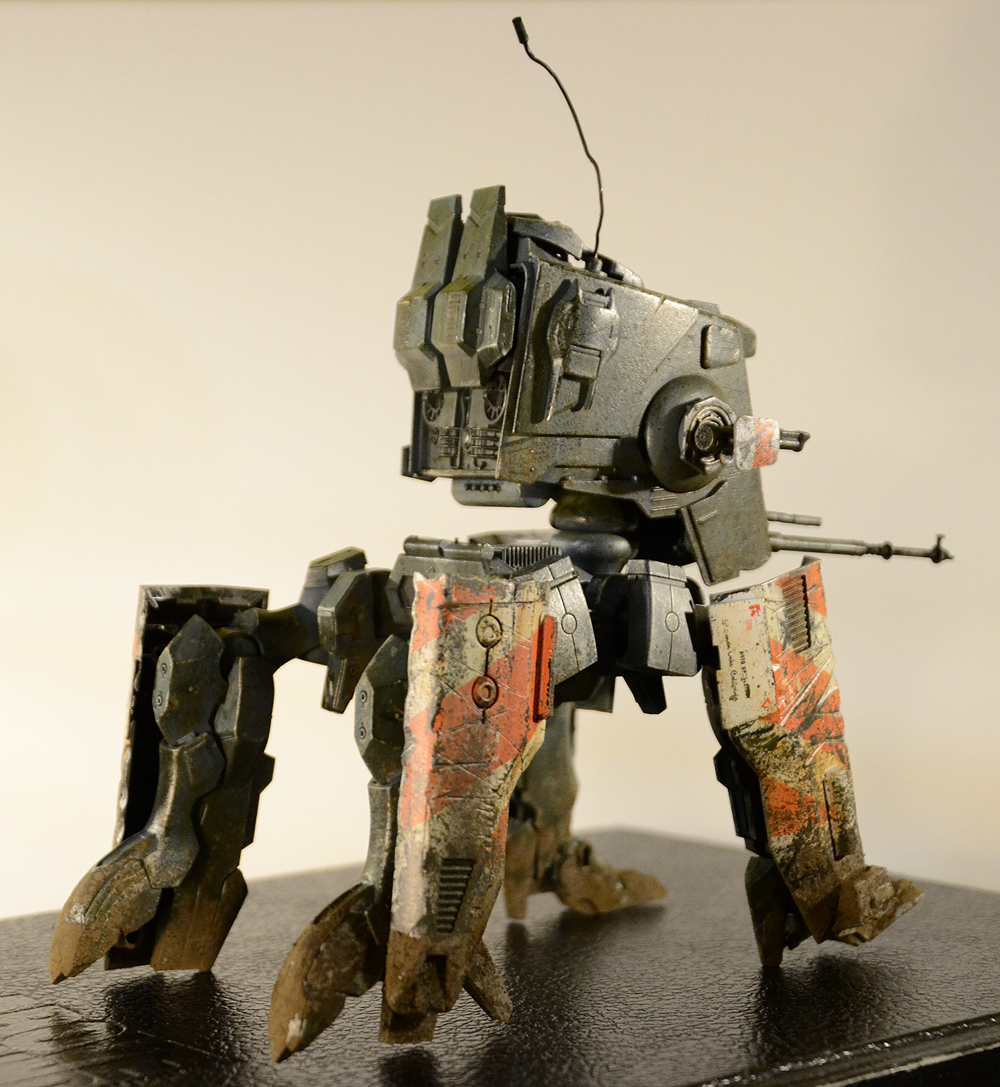 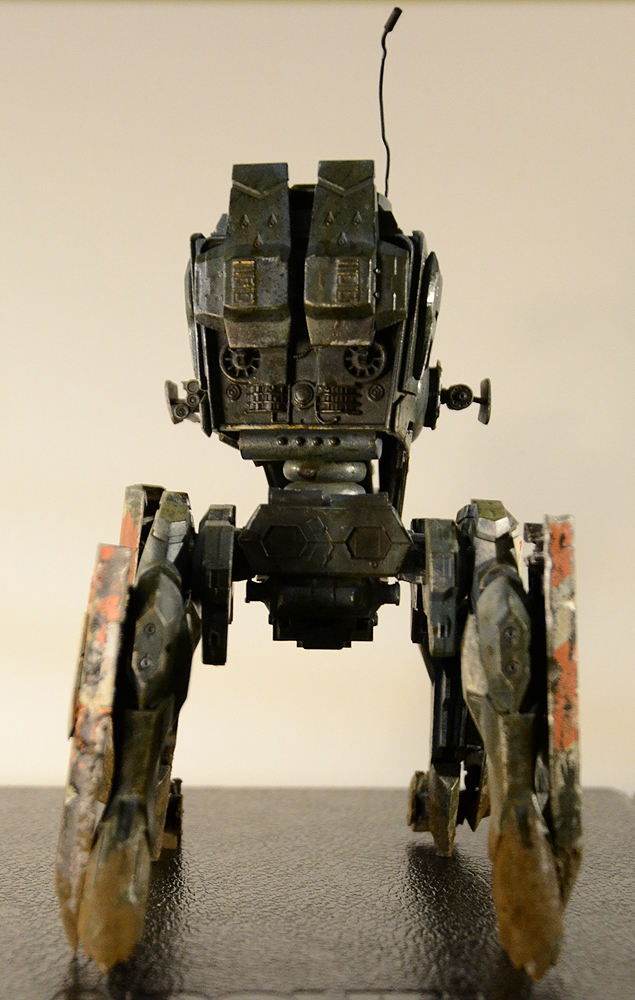 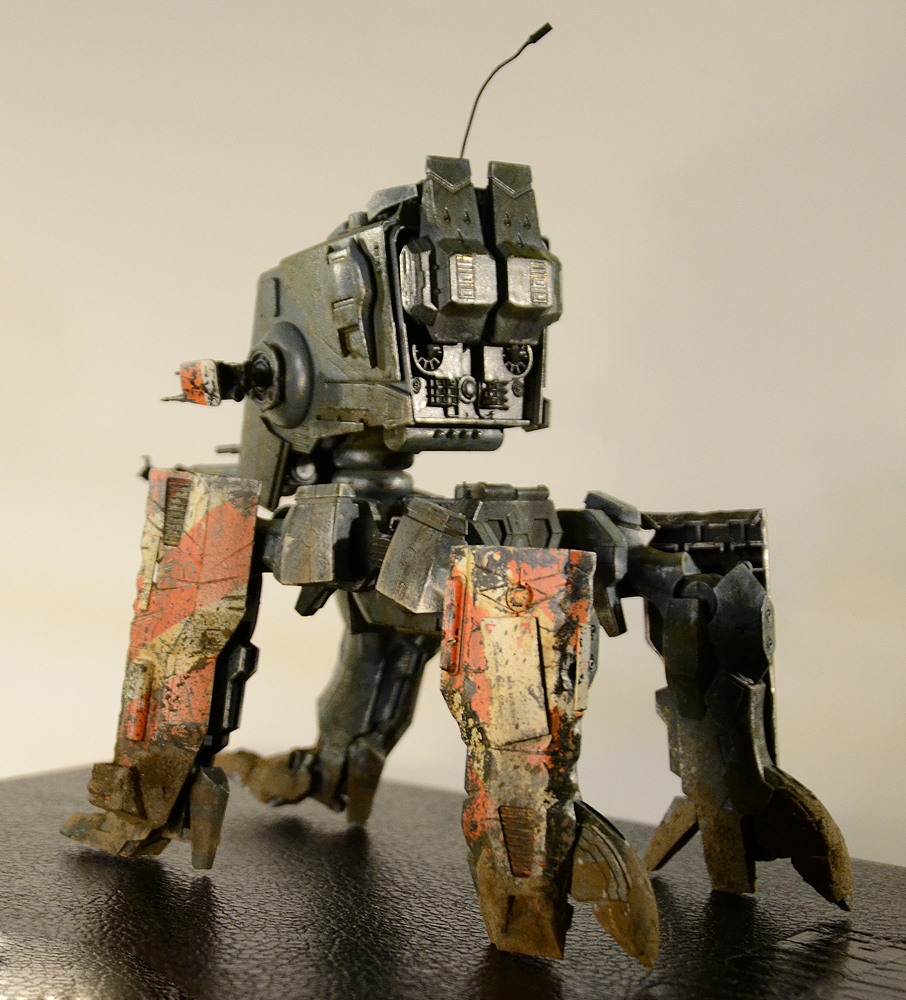 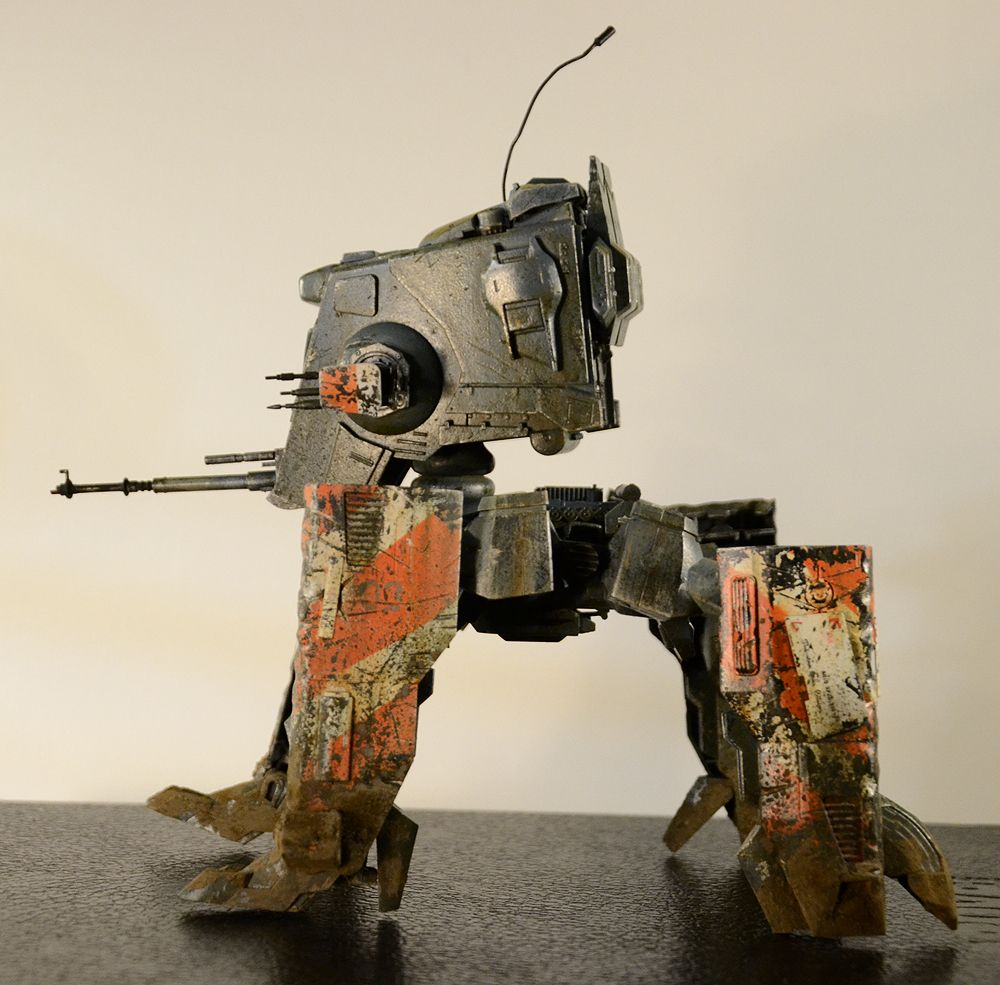 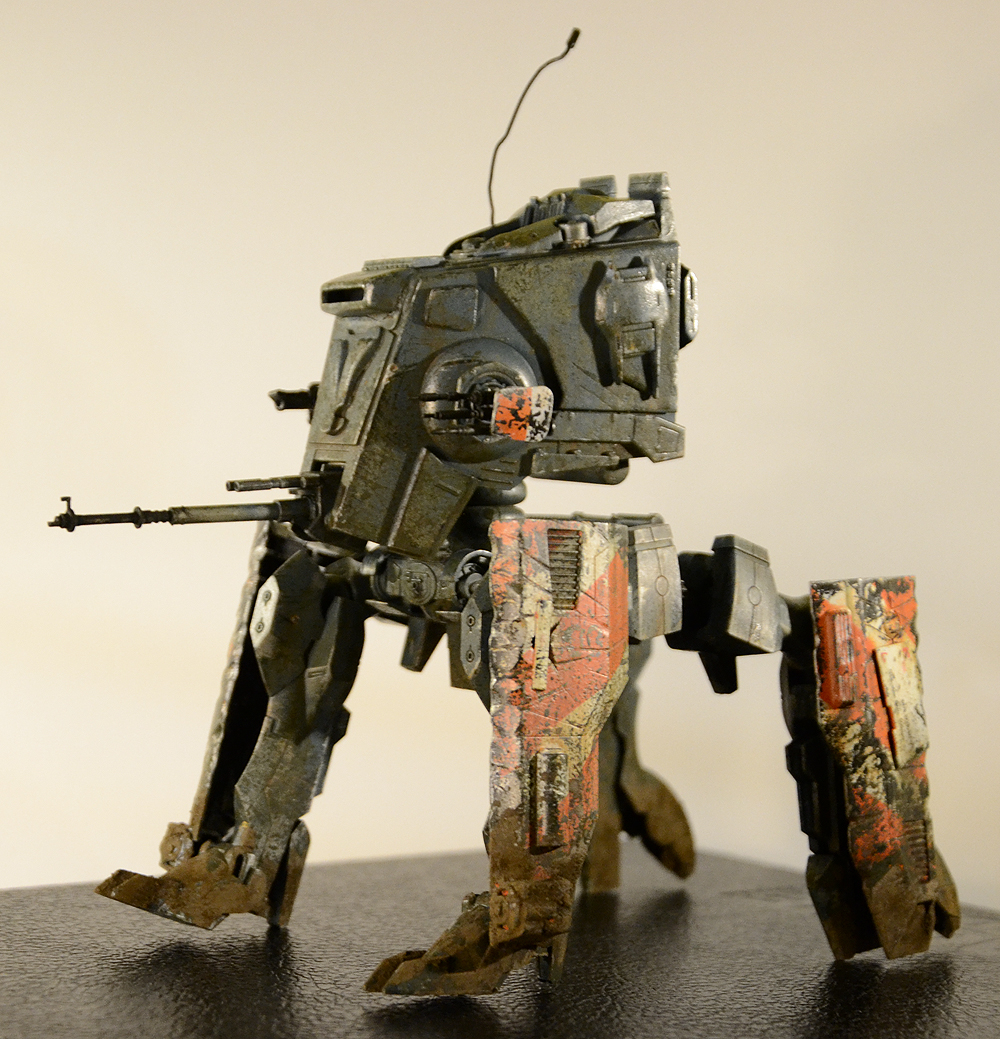 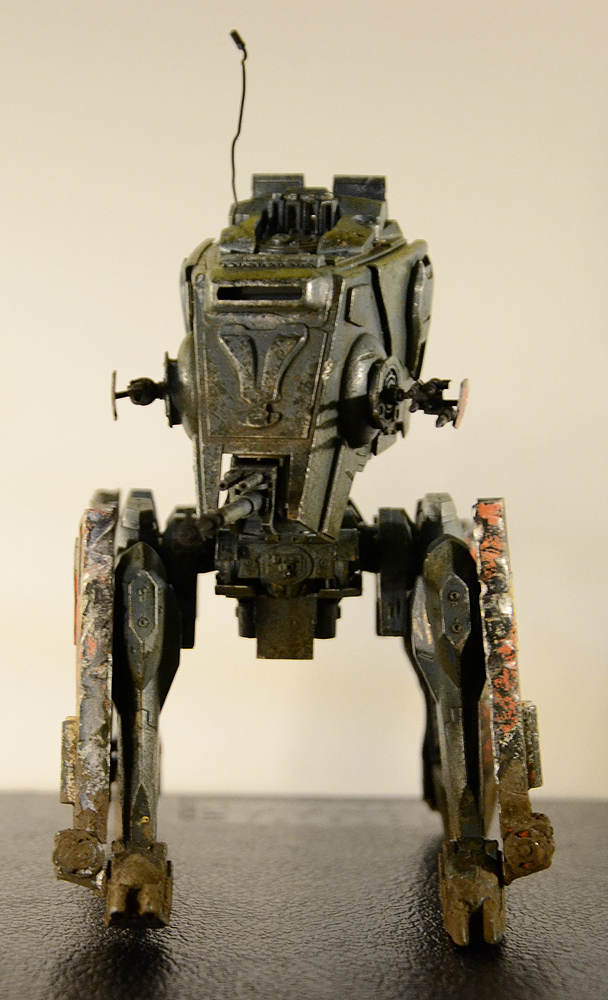 Sure, it kinda looks like a funny dog, but it started out as a "chicken walker," so it's not too far astray from Imperial design tendencies.

Thanks for looking!
I'm happy to answer any questions about this build, so feel free.

TheNakedSilo said:
and this Joe Johnston drawing of a "Mark VI":
View attachment 1305667
Click to expand...

Where is this drawing from? It's not in any of the sketchbook or "Art of" books I've ever seen.

Hunk a Junk said:
Where is this drawing from? It's not in any of the sketchbook or "Art of" books I've ever seen.
Click to expand...

He talked about it on his YouTube channel (then I looked it up in an image search...or did I do a screen grab? not sure...) where he used to talk about some Star Wars stuff (answering questions and such...and he also drew a couple of AT-STs rusting in the Endor forest) before taking down almost all of his content. There's still a Jabba drawing and some storyboard discussion. 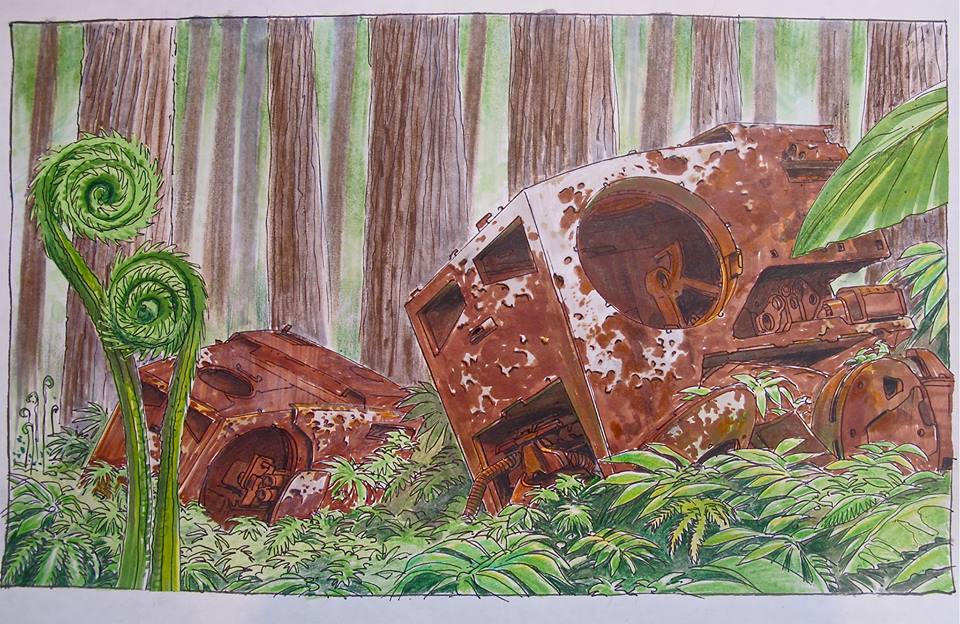