Got this vinyl kit as a first attempt to build one of these things, I finished building some days ago and started painting yesterday, took me the entire night to get the colors right but then I realized it's too dark, today I'm gonna try to fix it. Holy crap! If that's wrong, I can't wait to see it right!!

Is that the rubber kit or a plastic one?

Looks nice already. I look forward to seeing it with the "fixed" paint.

Why do you think it is too dark? I think it looks great

cavx said:
Is that the rubber kit or a plastic one?

Plastic, it's a cheap recast and doesn't have the name of the original one but I think it's the same you're talking about (maybe Halcyon), as the seller also has the long nailed and chestbusters. There's also a queen chestbuster which I was tempted to buy, but thought it would be too complicated for a first kit, so went it something with just a few big pieces.

The movie one has a lighter tone than my beige, I think I saw them in pink too (one place I remember for sure they were like this was in Alien 3 for Sega Genesis), but I want it closer to the first movie, not necessarially that bright, but brighter than it is now. 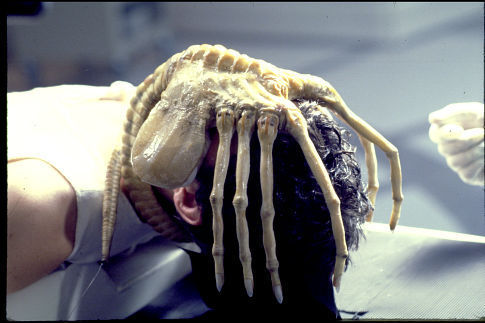 I just don't know if I should spray a overall brighter color or only over the highlights. The paint I'm using is common acrylics, not the special transparent ones for airbrushing. Will you paint its 'icky' bits too? The one is that screen grab from the original ALIEN was also under medical lab lighting, so why it might seem lighter than yours. I think yours looks great.

EDIT: Is that a wire hanging out the tail in that shot? If so, I'd never noticed that before and another one of those things HD seems to reveal from these older SPFX films.

That looks absolutely gorgeous. You did a great job. Love the little wave in the tail. Looks very much alive.

RPF PREMIUM MEMBER
Looks good to me! These are Thai or other east Asian knockoffs of the Halcyon kits in hard white vinyl. The originals are in flesh-coloured soft vinyl, quite flexible and poseable. They're also a lot bigger! The recasts must be fairly multi-gen since they've really shrunk. I have a couple of Halcyon queen chestbursters from A3 (a great kit made from the original prop's sculpt) and I have one of the knockoffs too since it was a cheap way to get a tail for another project. The knockoff is about 30% smaller!

I think it looks fine... Leave it.

Painting a facehugger was the single most difficult paint job I've ever done.

RPF PREMIUM MEMBER
Looks nice so far. Is that Apoxie sculpt you're using to fill your gaps?

Also has anyone ever made a fleshy silicon version with internal jointed bones before? That would be some creepy stuff to handle.

the grey putty is epoxi
there's a version with flexible tail but never saw jointed bones, would look awesome

I think I'm finished now with the mouth too I like it. Mine too came out a bit dark, but works. Actually, yours looks a lot like the one I did years ago.

Absolutely revolting! I love it! Colors look GREAT to me!

I think it looks very good! Here is a queen chestburster I did a while back. I wish I knew who ended up with it. 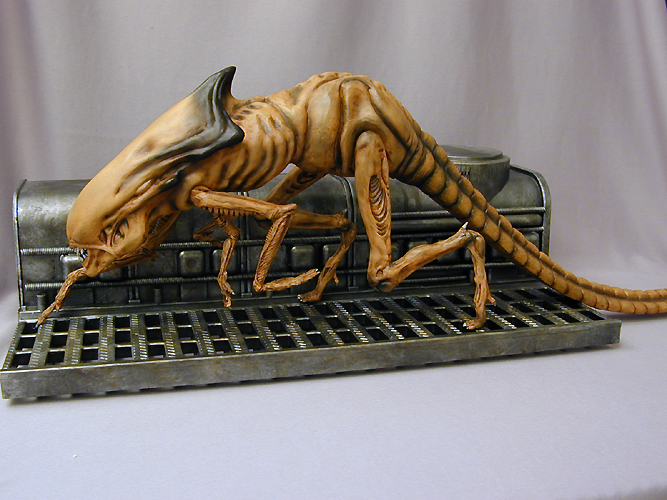 Thats a sweet paint up!

I went a different route with my queen chestburster

In time, I would like to make a stasis tube for it to put next to my hugger

and I still have this badboy to start yet

Clutch you made it on comission?

Allosaur is that the queen hugger or just another version?
I've seen pictures of a tube made from a trashcan as a base, it only didn't had water inside. Would look great with water and a led stripe lighting from the top.

Its a resin version of the Queen Facehugger..I've havd it for about 8 years now

I have Brundlefly's Hugger and stasis tube, which I would love to duplicate, just smaller to fit the baby queen..