Obviously, I am a big fan of the show and comic, but it wasn't until recently when I let my beard and hair grow out a little that people started telling me "you look like Rick Grimes", so I thought about giving it a shot and of course I came here. Admittedly, I am normally a Star Wars costumer, but after looking at the threads here by some great costumers (HakSawJak, ThinkBug, Sir Angus, etc.), I was able to do this one pretty easy and not too expensive. I started with the Season 3 "capturing and clearing the prison" version of Rick, but plan to pick up parts here and there to eventually be able to do Seasons 2-4 depending on my hair & beard at any given time. I bought a lot of the parts straight off eBay. It came in faster than I expected so I ended up weaving it to a local convention this weekend where my buddy's son was going to be Carl. We had a lot of fun and ended up getting 2nd place in the costume contest so its a good start at least, lol.

Boots: the actual ones are the Justin 2222, I am wearing Justin's, just a different model (9847) that look the exact same to me. I picked these up off eBay for around $80 shipped.

Pants: I've read the actual ones are Levi's 511 (Black tag). I went to JC. Penny ($45) and picked this exact model up although they seem a little tight in the legs so I am not sure if I just need to over-size for the right look or if we got the model wrong?


Duty Belt: All off ebay using "Vintage Basketweave Duty Belt" keywords. My current configuration is a Swivel holster, Handcuff case, 2 speedloaders, and key holder. I plan to get the radio and holder for earlier stuff. I will cut the holster down with a Dremel as soon as my 6" Colt comes in. I am just waiting to make sure I have the right amount sticking out the bottom.

Shirt: Ebay using tan or Khaki Mens western shirt. I started with this Plains Western Wear one to practice the dye & weathering technique. It ended up being good enough for this first weekend, but I have one with more accurate stitching in the mail. For the weathering I used some small scissors, pumice stone, light tan, then dark brown dye in a spray bottle. Finally, topped it off with some fake blood. I probably did 5-6 layers of the dye trying to get it in the right places.

Gun: Currently using a western gun prop that I had on hand from a Halloween costume 15 years ago. I have the TSD Zombie Killer waiting on back order from Blazing Toys.

Watch: He uses the KC3584 which I haven't been able to find, but I did pick up the KC 9306 which is really close (especially in pictures).

Machette: Rick Grimes TWD prop that came out around Halloween. It's CON -safe and 30" long. Loos good in pictures though. I also have the real one from Harbor frieght that I plan to Red Tape the handle on, but it isn't exactly Convention friendly.

Since nearly all of my parts came in, I decided to give it a go for the weekend and join my good friends son who was debuting his Carl. We also met this great "Dale (Douglas Caprette). We are starting to put together a Group for AwesomeCon in DC so if you know anybody that is going and would fit in with our group, please send them my way.

Here is my first shot at doing the make-up. I was going for the "grimy" clearing out the prison look.

Here are some more photo's from this weekend. 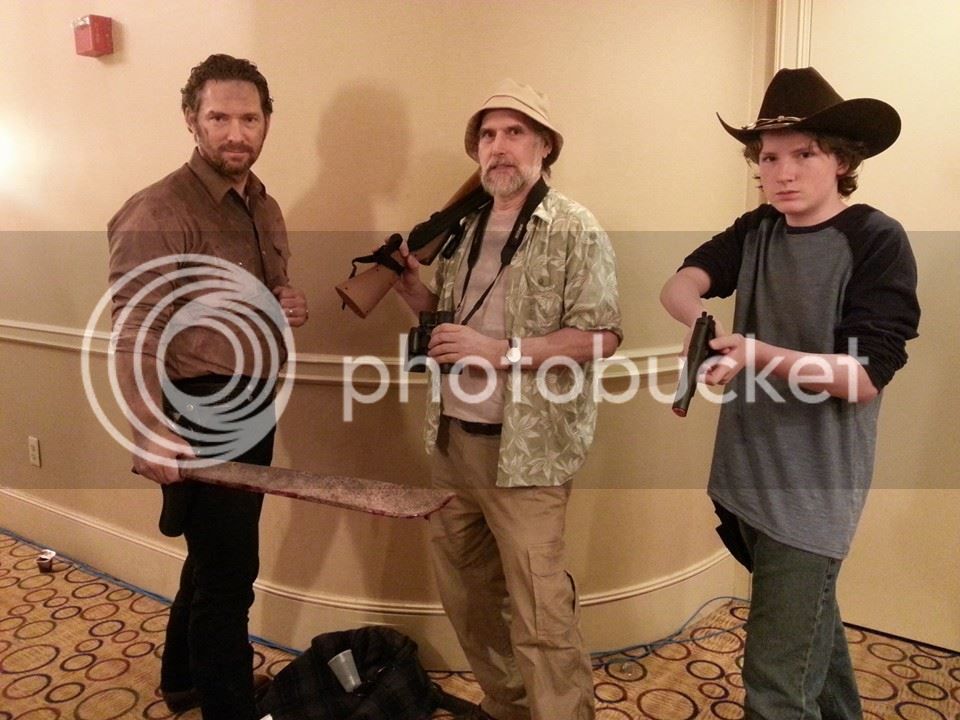 Does anyone have a lead on a Screen Accurate Season 2 coat? I have read that these guys are good, but it isn't accurate for the corduroy to go on the back part. 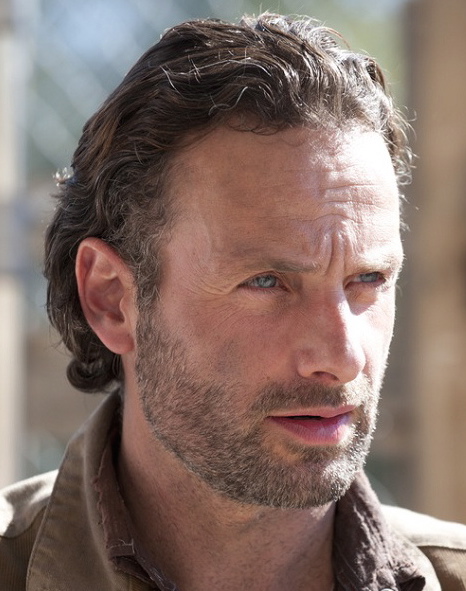 lol, no comments or suggestions? I have a few questions if anyone in TWD Cosplay are still lurking here on RPF:

- Have you ever taken a real machette or Knife into a Con and not had a problem with it? What if you just wear them and leave them in their case?
- What are some current options for the pistol? It seems like most are back-ordered or no longer available.

The boots above were a little tight on me so they are available is anyone is working on a Rick Grimes. Size 10
R

Surprised no one has commented how fantastic this is. I really love it, great job! Your son even looks like Carl

I just noticed it has some comments so thank you all for your feedback.

Great Job on this! Ive just been using brown work boots for my Rick since i have not been able to locate the cowboy boots he wears on the show. random question: how did you style your hair to get that slicked back look? my gel just doesnt give me that 'slaying zombies in the heat' look.

I will check and see what the name of it is, but its in a red bottle at the grocery store (Giant). Nothing fancy, just put it on while your hair is still plenty damp. Man I really need to update this thread with my new pictures that show some of my costume upgrades and Con's I have been to. We just finished Walker Stalker Convention Philly last weekend and it was an amazing. Looking forward to Atlanta next month where I will be doing a different Rick each day.

Vult Tavik said:
We just finished Walker Stalker Convention Philly last weekend and it was an amazing. Looking forward to Atlanta next month where I will be doing a different Rick each day.
Click to expand...

Hey I was there on saturday. Not sure if I saw you or not...there were a few Ricks and about a million Dixons haha; I was the Dixon walking around with a girl dressed as the wendigo from Hannibal (dressed/painted all in black with the black antlers on her head).

RPF PREMIUM MEMBER
Great gear you got goin on sir. Really awesome. Any luck on that season 2 coat?

i bought a gap canvas jacket(styled like a jean jacket) that looks close to Ricks. What I did was bought some Otterwax and waxed the front panels of the jacket to darken and serve a purpose when it rains.

So so if you can't find anything close to screen accurate maybe that'll help with something that's close enough. Idk, just a thought. Keep up the great work

Sorry I have been so terrible about updating this thread. This costume has come a long way over the last year and I can cover nearly every single costume change from when he put the Police Uniform down in the 2nd Season to start of Season 6.

So I did get the Denix version of the Colt Python .357, took it apart and painted it.

My feeble attempt at recreating the EW cover, lol.

Here are some more recent photo's from my first Walker Stalker Convention in Philly:

Saturday I did the Season 4/5 look using a little make-up advice from friends and adding Grey paint to my real beard.

We also ran into an old friend and I just couldn't blame them: 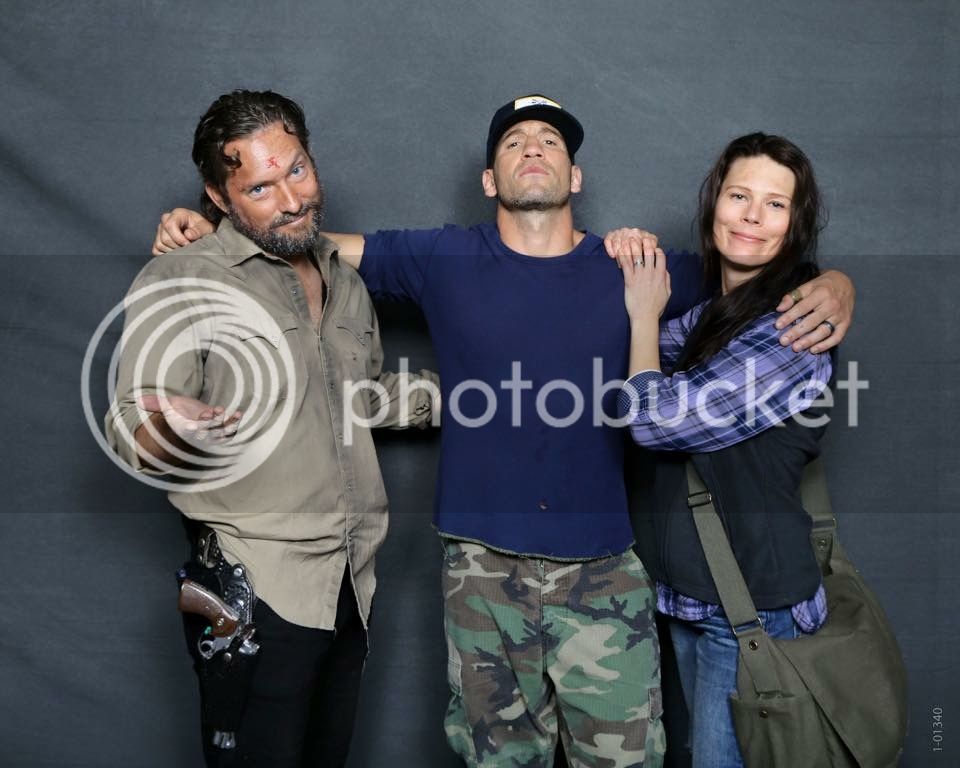 My wife and I were also luckily enough to win the Costume contest which was a huge honor given how many fantastic costumes there were!

I mean seriously, check out how great these others up there with us were:

My Buddy and I re-created one of our favorite shots:

Since WSC Philly I started working on my Season 6 promo shot costume which is turning into my Season 6, Episode 1 costume very quickly:

And jokingly I started putting together an Andrew Lincoln Cosplay since we are going to be going down to Atlanta for the next WSC and he is going to be there.

Also, I did indeed settle on a Season 2 jacket from one of the Chinese Repro sites. It has been the bane of my Cosplay existence trying to get it just right. I completely lost count of how many times I dyed, bleached, dyed, faded this thing. I could never get both the base fabric and the yoke to be the proper colors until I focused on just getting the base coat right, then air brushed the yoke with the proper mix of paints. I'm sorry I don't remember what I used because I did it like 5 months ago. I almost threw this jacket out 5 times and started over.

When compared to the MSG Season 6 display, I think it looks pretty damn spot on. I am calling this damn thing DONE! 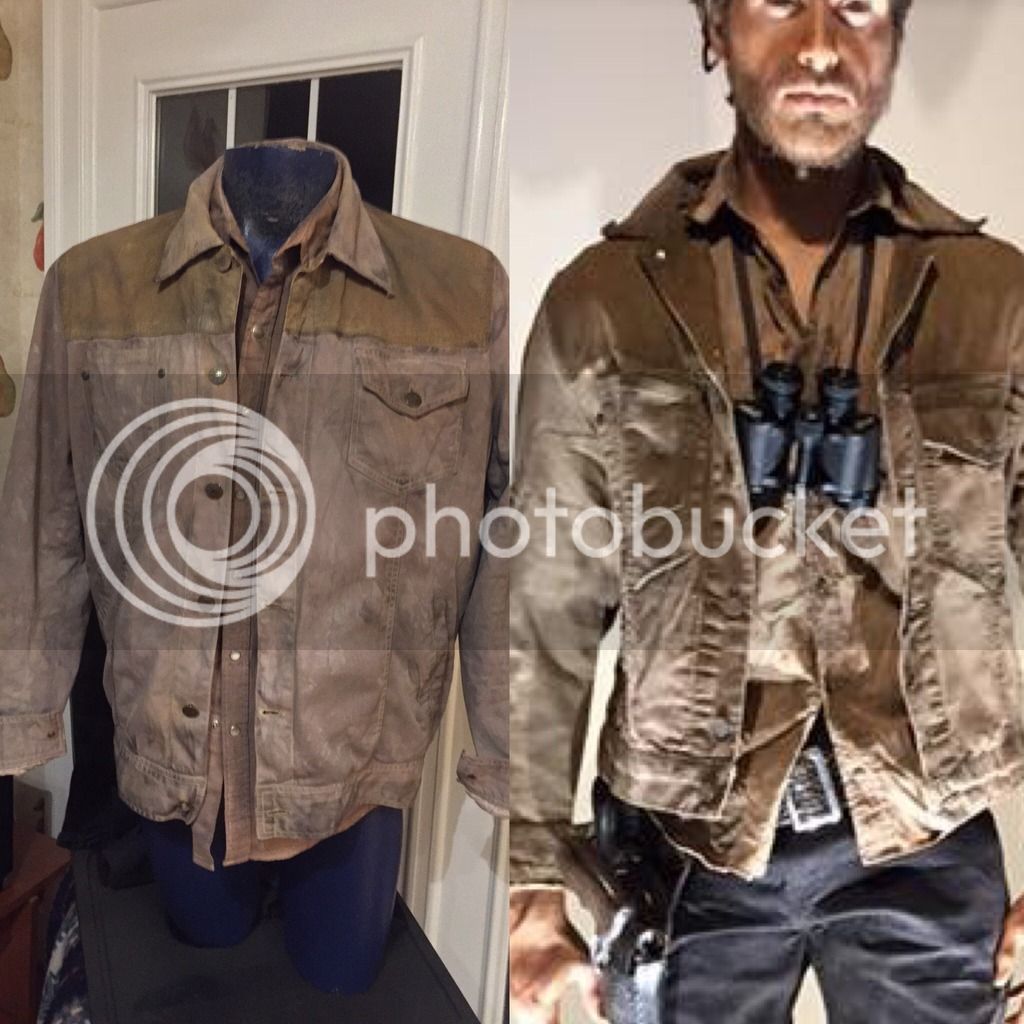 For Season 6, Episode one Costume:

- I painted my AK to look more like a Dark Earth Fiber stock instead of wood grain
- I purchased a Ryan Michaels Tan shirt that looks the same weight fabric. It has the Safari pockets with a Western pocket flap, but the pleats are on the inside. I am modifying this by taking the pockets off and reattaching them inside out to get the proper look. I have already died and faded the fabric to my liking.
- Radio on his belt is no longer the Motorola MX2000. Given what images were available and spending hours looking at other photo's I am pretty sure he is now carrying the Radius CP 200 model.

I will be debuting this in Atlanta, but may take some trial photos and post them here first. Anyway, that is my update for anyone is curious.

Special thanks to Avery Klemm, HacksawJak and The Cosplaying Dead family for their help & support.

Mechanized2400 said:
Great gear you got goin on sir. Really awesome. Any luck on that season 2 coat?
Click to expand...

Yes sir, please see my previous post where I have pictures up on the completed jacket. I DID NOT get it from the site I linked earlier in this thread. It became very clear to me that that one if not screen accurate with the Yoke fabric extending over the shoulders onto the back panel. I will go check my email and find a link to this manufacturer. It was still a lot of work to get it right.

RPF PREMIUM MEMBER
Awesome build man, and congrats on winning the contest! We're hoping to go to the Walker Stalker con when it hits Chicago.

RPF PREMIUM MEMBER
So awesome dude! Looks great and congrats on the contest. Hard work pays off in more ways than one

Im looking for a set of goggles like the ones in this concept art.