Flawless Victory! It was everything I wanted, and done better than expected

Didn't really like it, to be honest. It felt like the balance of elements was really off. Or like you had a script writer who was determined to tell a compelling story, and producers who didn't care and just wanted fight scenes and gory fatalities.

Like, there's this real attempt at characterization, but it just falls flat.

Cole (or whatever Not-Johnny-Cage's name was) is a family man who's just struggling to get by and who is apparently reluctant to "use the uppercut." (Why? We never find out. Like, did he kill a dude in a fight and vowed never again? Did he try it and it didn't work and he's lost faith in his mojo? Did he get badly injured in the pro leagues and now he can't pull off the move? We'll never know.)

Jax is a tough soldier but is he on a mission from the government, or are he and Sonya just doing stuff on their own? Again, we'll never know. When Cole(?) shows up at Sonya's....trailer(?!)...where she grew up(?!?!?!?!) he says they look like they're "ready for anything." But why? How? They've got racks of...uh...stuff, but I wasn't looking closely enough to figure out what was on the racks, so it's unclear whether this is like some side gig they're working or some clearly government funded initiative....with two people. 'K. Beyond that, all we know is Jax is bummed that his arms got shattered and his new ones are kinda scrawny until they automagically grow into super bionic cyborg badass arms. Because they came from another dimension. Then he's got some beef with whoever the big dude from Fury Road was (I'm gonna call him M.C. Hammer) sufficient that he has a score to settle with him, but all I can remember is that they had a fight about 5 minutes earlier and Jax didn't win or something. Regardless, all this stuff just kinda...happens. It's never given any real significance. So, when the final kill happens, I just....didn't care. I mean other than "oh hey, he did that in the game." Again, there's no build-up to this stuff.

Sonya lives in a trailer (DOWN BY THE RIVER!!!) where she's apparently lived her whole life or something, and she reeeeeeeaaaalllllllly wants to be invited to the tournament. Why does she live in the trailer? Why does she want to be in the tournament? It's never really explained. But it's characterized on screen that this is all the case. The actor is playing the role as if all of this stuff has real meaning, as if there's some backstory to the character. But there isn't. I mean, maybe there is if you're a super-fan of the game and you know the deep, deep background on the characters, but the film doesn't do a damn thing to convey any of this.

Kung Lao is apparently the cousin of Liu Kang, but Liu Kang was an orphan found on the street, sooooo is "cousin" more of an honorary thing or are they actually blood related? Again, this is never made clear. Kung Lao is the descendant of some guy who won the tournament, and he has a neat-o hat and some cool powers, but otherwise...we're never really given a sense of who this guy is. He shows up, does some cool Captain America stuff with his hat, slices a bat lady in half (cool!) and then gets gobbled up by Shang Tsung. Liu Kang feels kinda sorta sad when Kung Lao dies, but it's over in, like, 2 seconds and we're moving on.

On and on this stuff goes with the characters. The whole time, the actors are playing it straight. Like these characters have internal lives and motivations and backstories and stuff, but there's just....nothing there on screen other than their behavior. It's never explained, it's never even really mentioned except once in a blue moon in passing. So you've got this half-assed attempt at characterization, but it just....never happens. Oh, and no explanation why Bi-Han becomes Sub Zero. He just...announces this and that's that. Like we should give a s**t. Is there some back story for the Lin Kuei that when he says "For the Lin Kuei" I should know what it is and give a damn? Because I don't. That means nothing to me. Don't go throwing that in to your film if you won't bother to explain it. That's the worst kind of fan service. "Here's a reference to a thing that only fans will know about, but we'll act as if it's incredibly significant and then....do nothing with it."

Meanwhile, it ends up that we spend probably 2/3 of the film just watching these characters not be able to fight effectively, only to get to the last maybe 20 min of the film and have each of them have a 2-3 minute fight sequence where they show off their new moves. And yet none of it is ever this much ballyhooed tournament!!! The big tournament that'll decide the fate of the universe? Never happens. The whole thing is an end-run to get around the need for the tournament, which leaves the actual tournament to be shown in some sequel, maybe, if that ever happens. And yet we still have a bunch of fights, each taking place in a different location, most of which have finishing moves.....buuuuuuuut it's not the tournament.


This film could have been a lot simpler. Or it could have been a lot more complex and deeper. But this approach to it is neither here nor there and as a result, it's really....nowhere. They didn't do enough characterization to make me give a crap about the characters. And they didn't do enough kickass fight sequences and gory finishing moves to give me the kind of thrill I was looking for. They load these characters up with implied backstory but do nothing with it, when none of it is necessary. Sub Zero was Bi-Han who fights because of the Lin Kuei and OH WHO GIVES A F***?! He doesn't need to be any of these things. He can just be the blue ninja dude with ice powers who work for Shang Tsung. There. Done. The characters spend like 1/3 of the film "training" (although really it's just Kano bitching the whole time...which was kinda funny but ultimately went on too long), and then they don't even go to the tournament? Come on, man. Either ditch all the half-hearted feints towards character development, or do it for real. But as it stands, all it does is get in the way of cool fights, and actually getting to the tournament.

So, yeah, not a good film. Not even a good bad film. Good enough for me to crack jokes at while I watched, and the kills were cool, but it was just really poorly constructed as a film.

I enjoyed it, generally speaking. It gave me what it promised on the tin: Lots of fighting and gratuitous amounts of blood. The thing that sticks with me and really bugs me is what a TERRIBLE mother Cole's wife is.

"I don't watch him fight anymore."

But sure, our tween daughter can stay and watch daddy get the sh*t kicked out of him...

I thought for certain she was like a newish girlfriend who used to be part of his team when he was a pro, but then they revealed she's the kid's mom and I was like "whaaaaaa?!"

RPF PREMIUM MEMBER
I watched it but didn’t really care for it but I’m not a huge MK fan. I am glad that the MK fans liked it and I hope they get a sequel.

It's a video game movie, and more so...it's Mortal Kombat. I had absolutely no expectations. LOL

I used to play the arcade and watched the first movie when it came out in the 90's. I expected hearts to be ripped out, people ripped in half and goofy fight scenes. It did exactly that.

I liked the opening scene, but you can't get too serious with MK, it's literally trash and that's why people like it. Same goes for Street Fighter...how are you going to make a 2 hour movie about this??

I will say, loved Kabal and was really shocked he showed up. Would be kind of cool to see Sindel and some of my other old favs.

RPF PREMIUM MEMBER
This was a really well done B movie.

Horrible, sometimes campy dialogue, sloppy storytelling and awesome action. You can tell a lot of attention was paid to the fighting and not a lot in the story.

Goro made me laugh out loud several times.

RPF PREMIUM MEMBER
I enjoyed it. It was completely ridiculous, and that is exactly what I expected it to be.

Anyone else think of this when watching the movie? 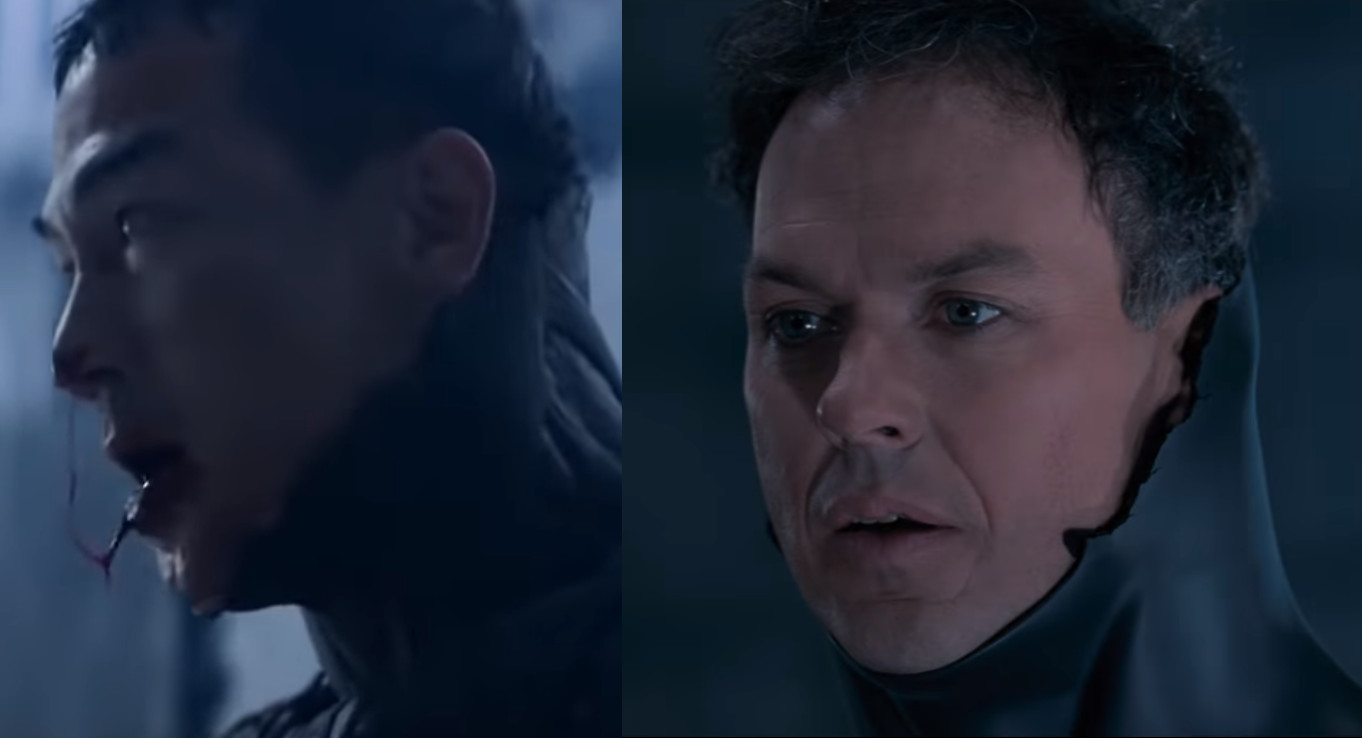 Pure violent entertainment, just like the games! Enjoyed it even if it wasn't a true flawless victory. Now i need to find a screencap of Kano holding that heart and replace it with an eggroll